6599 people have viewed this lot

Like virtually every American car manufacturer, Ford’s immediate post-war offerings were mildly updated versions of their 1942 models and little changed from 1946 until 1948.  It took until 1949 for the Blue Oval to develop an all-new design, based around a brand new chassis wrapped in a cleanly-style, aerodynamic new shape.  Underneath the same six-cylinder and flathead V8s remained but the transverse rear springs were done away with, replaced by longitudinal springs for a much improved ride.  Two trim levels were available in 1949, the base level and more upmarket Custom and – for American customers at least – the model range consisted of both two and four-door sedans, Club Coupe, convertible and stylish Station Wagon with timber-panelling.  Fed by a Holley two-barrel carburettor, the well-proven V8 was rated at 100 horsepower at 3600rpm, allied to a three-speed column-change manual gearbox with automatic overdrive optional.  Ford’s Australian arm famously pioneered the first Coupe Utility in 1934, starting a tradition that continued for many decades and the so-called ‘Single Spinner’ 1949 model’s styling was particularly suited to the concept.  Offered in both standard and Custom models, the latter proved far more popular and 1,960 were sold in 1949 according to one set of figures.  Surviving examples of this uniquely Australian ute are few and far between, particularly in original condition such as the example offered here and they make fantastic club cars, with plenty of support available to owners.

• Wonderfully original Ford ‘Single Spinner’ ute
• Formerly in the Bruce Terry collection
• Older restoration
A fabulous survivor, the known history of this 1949 Ford Coupe Utility dates back to the 1980s when it belonged to Barry Schofield of Woronora Heights, NSW.  A number of photographs supplied show the Ford at various stages during its restoration, although details as to when the work was carried out aren’t recorded.  Last registered in NSW in 2003, letters on file indicate the ute was sold to Melbourne property developer Bruce Terry, who amassed a substantial collection of classic cars, including numerous Rolls-Royces, Bentleys and had an eye for particularly original Holdens and Fords.  Following Terry’s passing back in 2008, many of these cars – including the Ford - were sold through the Classic Throttle Shop in North Sydney and it has resided with the new owner in the Hunter Valley ever since.  Recommissioned following a period of storage, the ute runs and drives well, the Flathead V8 purring smoothly and the column-change shifting gears easily.  The Ford presents in lovely cosmetic condition, the older restoration holding up nicely; notable features include the painted timber look dash, central clock, period radio, refurbished steering wheel and re-upholstered bench seat.  The tray bed was re-lined, new timber bows fitted and comes with a fitted tonneau cover, while indicators have been added for safer driving.  Currently unregistered, the Single Spinner comes with some sales literature and old registration papers supplied and would make a wonderful addition to any early Ford collection.
Note: Shannons advise that all potential buyers research all vehicles before purchase to authenticate originality. 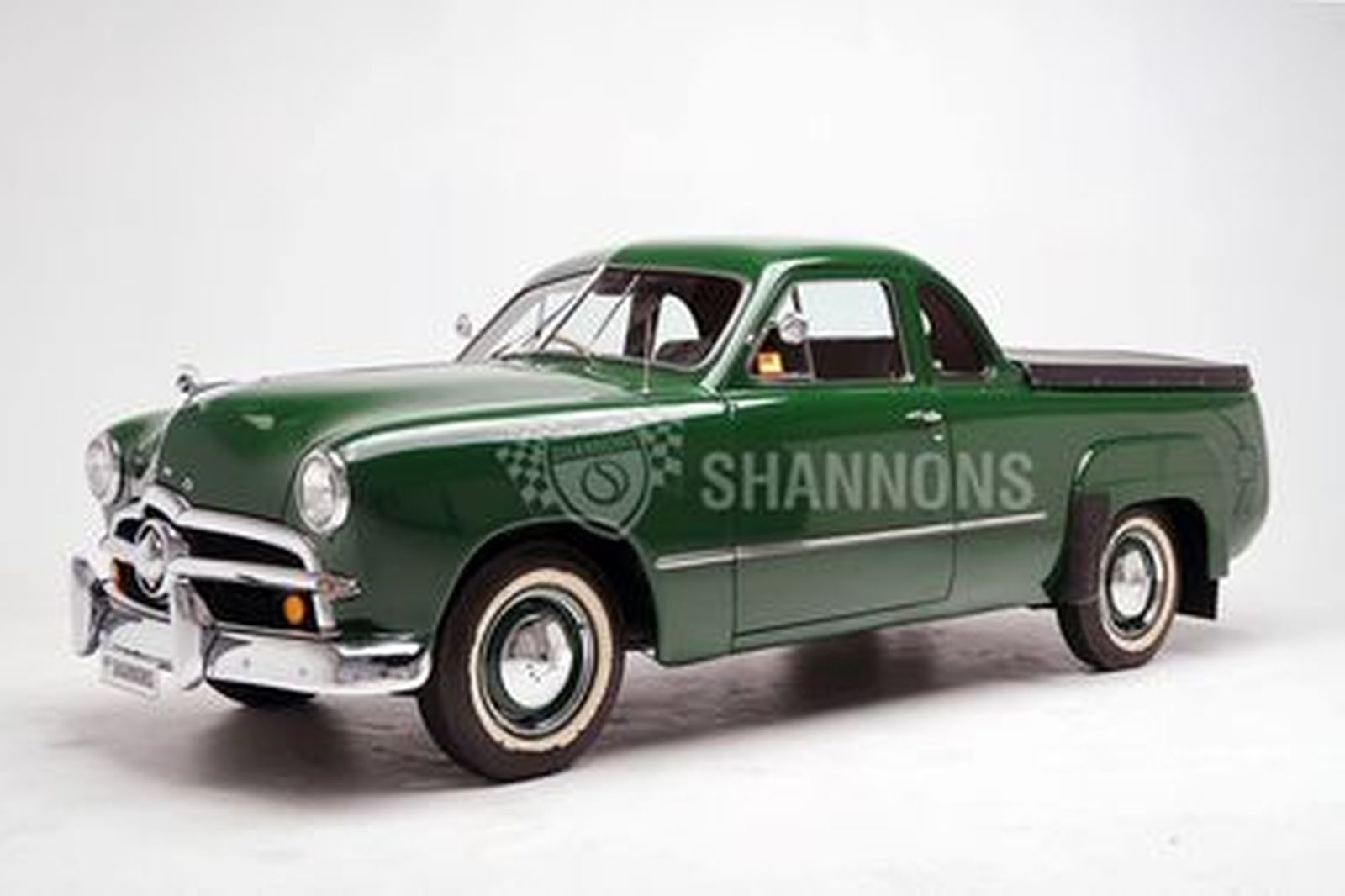