1391 people have viewed this lot

Renowned for building high quality, strong performing cars at a reasonable price, Buick refined their model range through the 1920s, offering an all-new six-cylinder model alongside the existing four in 1924.  Employing a stronger chassis frame on a longer 128-inch wheelbase, the 1924 six-cylinder models saw front brakes added as standard equipment, while the engine itself increased to 255 cubic inches and featured a detachable cylinder head and aluminium crankcase.  Rated at 70 horsepower, the motor endowed Buick’s latest model with strong performance, coupled with a 3-speed sliding gear transmission and mechanical brakes.  Buick offered two trim levels, Standard and Master, both identified by nickel-plated trim and buyers had the choice of a wide range of body styles, including sedans, roadsters, coupes and tourers.  Options included a Motometer, front and rear bumpers and wind deflectors.  Buick had a long involvement with Australia, dating back before the First World War when the first examples were imported by local agents, and through the 1920s when a number were imported from Canada in CKD form to be assembled locally, known as McLaughlin Buicks.  General Motors opened plants in Melbourne, Sydney, Adelaide, Brisbane and Perth in 1926 and contracted Holden Motor Body Builders to supply coachwork that was often quite different in build methods and general styling to their American counterparts.  The 1924 Buick is a robust, well-made vintage car with enough power to make driving in modern conditions a pleasant experience.  There is a strong club scene for the Buick here in Australia and plenty of support available to owners both here and in the USA.

Previously located in Deniliquin, this lovely 1924 McLaughlin Buick Master Six was discovered by the previous Victorian owner sitting abandoned in a garage back in 1976 and underwent a ground-up restoration carried out over the next three decades.  Featuring a desirable factory Seven-Passenger Open Tourer body, the restoration saw a new timber frame constructed, all-new nickel work, a complete re-wiring and all panels restored, with much of the work carried out by Colin McConnell’s Village Engineering shop in Echuca, Victoria.  Leather specially imported from Scotland was used for the seats, door skins and inside the firewall, along with quality wool carpets and a new hood frame constructed of hickory bows.  Ribbed aluminium running boards, a feature unique to the 1924 McLaughlin Buicks, were also fitted, along with new tyres and tubes.  Attractively finished in dark blue with gold pinstripes, offset with orange wheels, a quantity of photographs document the different stages of the restoration.  The current owners purchased the Buick from Shannons’ Melbourne Spring auction in 2017 and immediately set about making the car reliable for use in their country pub for tours to local wineries, even having it fully registered in NSW.  A modern fuel pump and carburettor was installed but the original items come with the car and could easily be refitted.  To be sold unregistered but with a valid NSW Pink Slip supplied, the Buick comes with full wet weather equipment (side curtains), some tools and an Operator’s Manual and Parts Book supplied.
Note: Shannons advise that all potential buyers research all vehicles before purchase to authenticate originality. 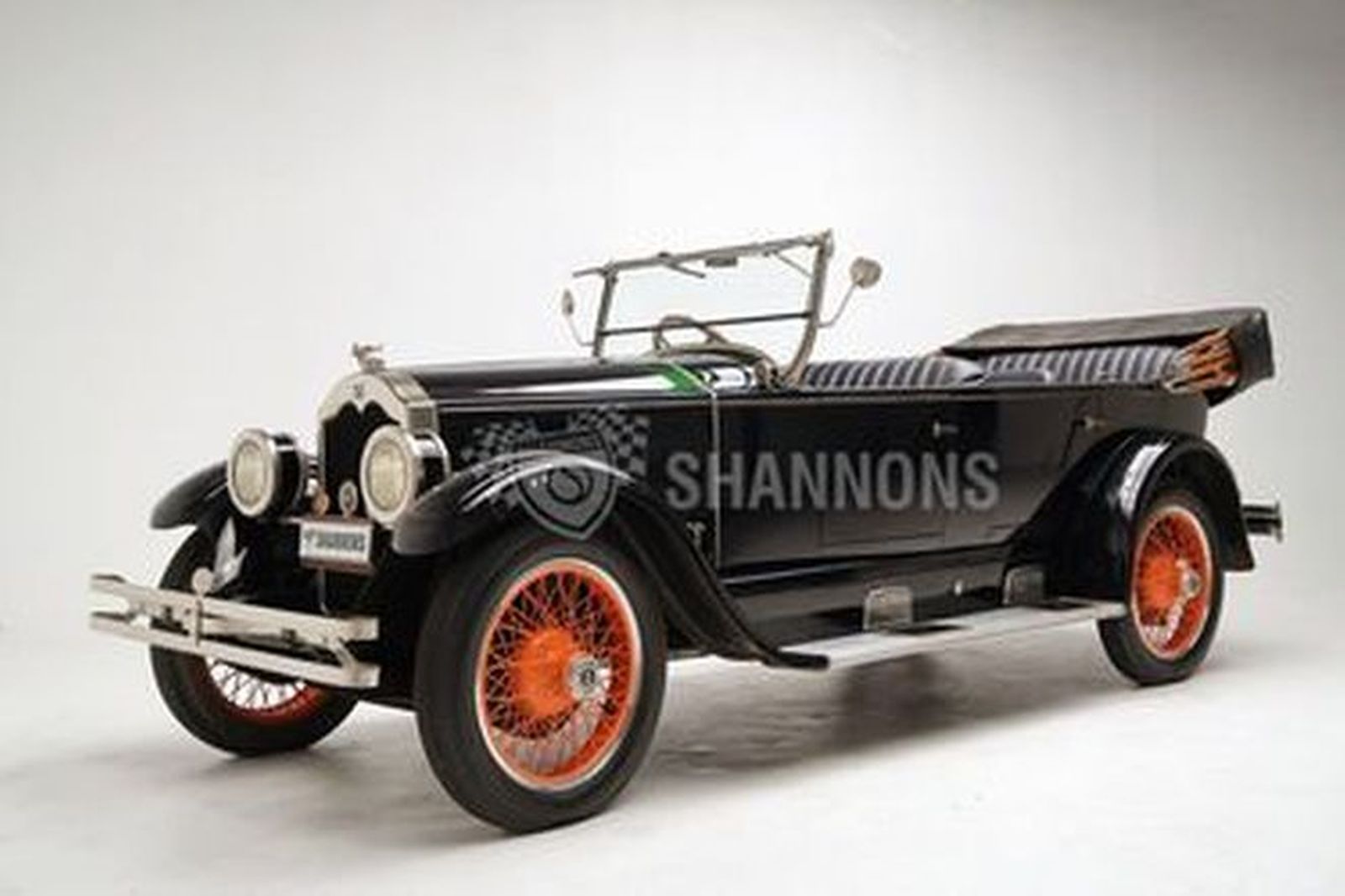