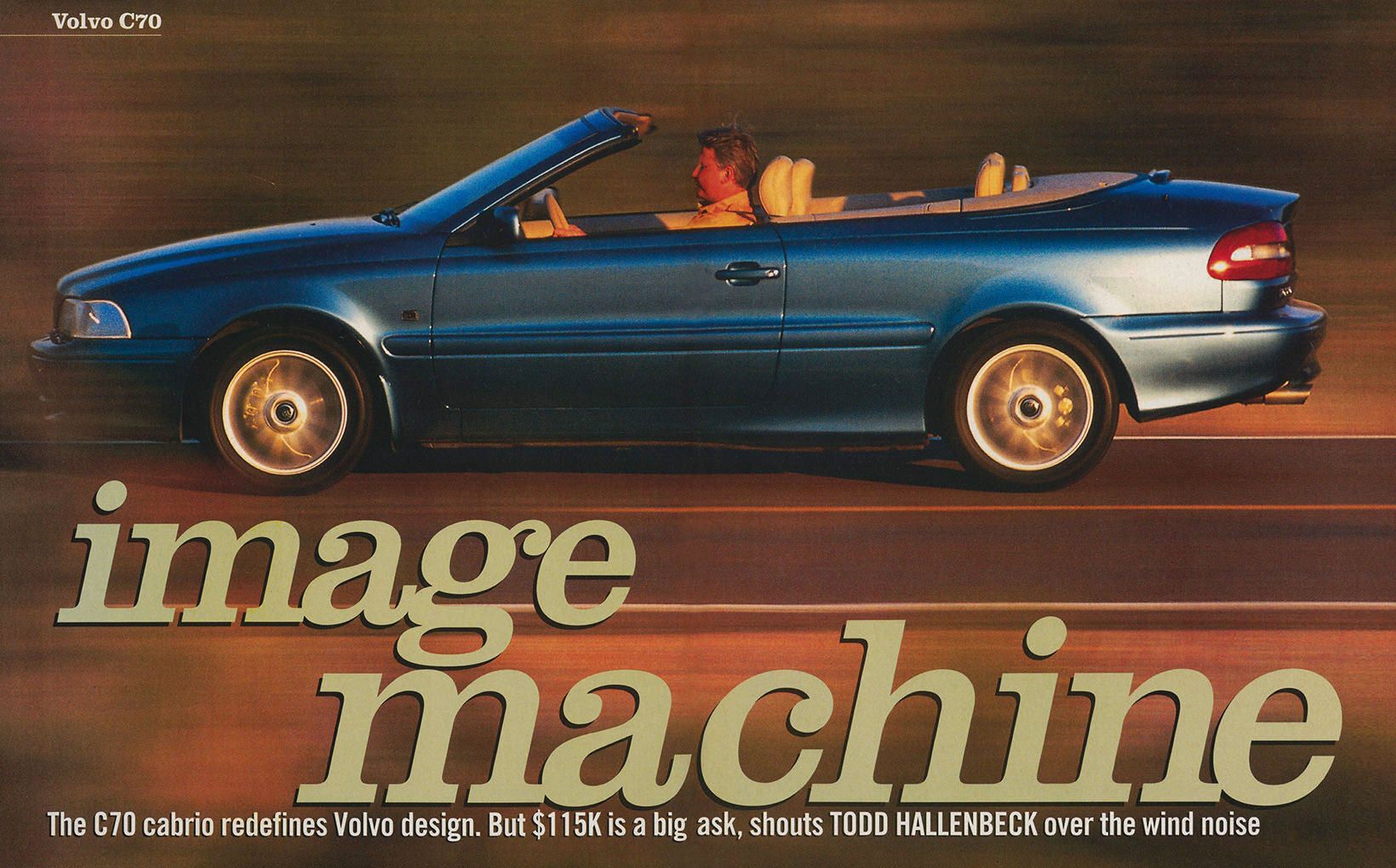 When Volvo decided to work on a car design outside the square, there was more than tradition, sweat, budgets and time schedules in the breaking. A Volvo coupe was predictable, but a cabriolet from the car-maker selling safety sounded more like Volvo playing silly buggers than being a serious undertaking.

We first saw the C70 cabrio in production readiness at Detroit '97; the guff from Volvo said it would be on sale in late '98, only to be pushed back to early '99. Why so long? Thomas Lindskog, C70 platform chief engineer, has been asked the question more often than how to spell his name. Uncomfortable with the reasons for the delay, he tries digging his foot into the concrete instead of answering. ''We needed to make sure it was right." Volvo, hugely dependent on export sales, couldn't afford an Edsel or A-class.

The blame stops there but the story doesn't. The C70 coupe and cabrio are built in Gotherburg, Sweden, by Autonova - a joint venture Volvo and TWR Group company. Volvo's mass­production experience and TWR Group's specialty car experience were supposed to match strengths. Suffice it to say problems occurred between design and production. For the record, C70 design credit goes to Volvo's chief designer Peter Horbury, but the car was sketched in England by TWR designer Ian Callum. Body structure design also fell to TWR.

TWR was a major player but the car would wear Volvo's name and therefore it would bear Volvo's stringent quality controls and high crash protection. Early information claimed the cabrio tipped the scales 100kg heavier than the coupe. In fact, in final trim the C70 cabrio weighs 187kg more. Weight gain is accounted for in the cabrio's substantial inner-body reinforcement surrounding the rear seat. This bolsters body rigidity, maintains commendable ride and handling qualities and reinforces side impact strength - all of which Volvo was very insistent about. We meet the cabrio in Phoenix, which brings the Eagles' Take It Easy to mind. Was the woman slowing down in the flatbed Ford in Phoenix or Winslow? To see the C70 cabrio in the parking lot - finished - Lindskog is overwhelmingly relieved, displaying the same expression that comes two hours after eating Mexican food. The cabrio shares everything with the coupe, except the roofline - and the price. The interior and dash are straight from the S70, ditto down to the car's chassis and 2.3 litre five cylinder turbocharged engine. 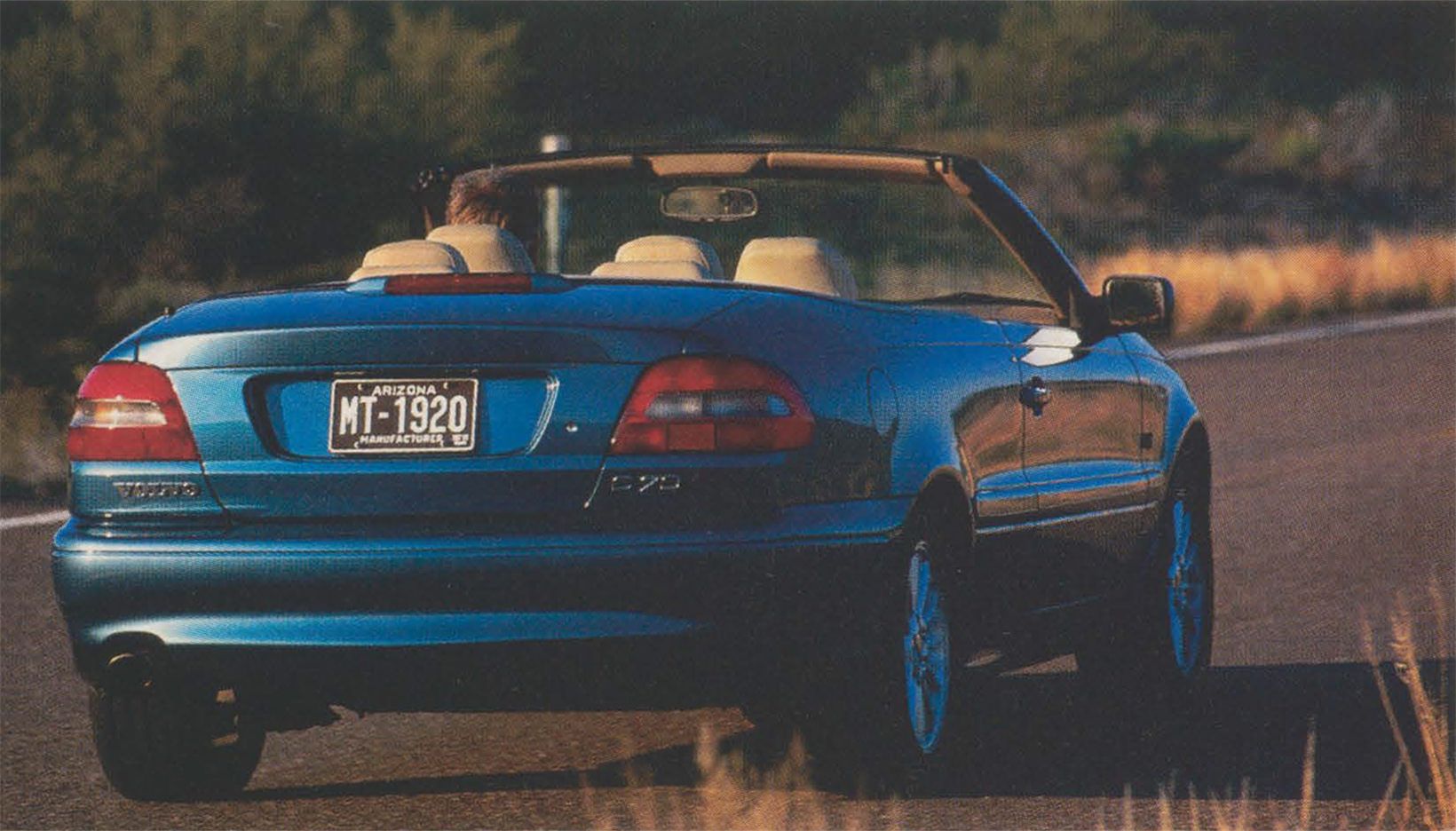 Make or break, this is Volvo's best, most desirable and most expensive love machine. If it doesn't touch you emotionally with leather from asphalt to atmosphere, it tries desperately to thrill the home boys inside your Bonds with its handful of pistons and a heartfelt 176kW.

Hold on to your heartstrings. The beauty may last one short monetary moment, because here's the ugly reality - $115,000. Still in love with the most expensive Volvo to sell on our shores?

It's more pricey than competitive four-seat convertibles by Saab (9-3 2.0 litre turbo) and BMW (328i), which are both under $100K and in the C70's perfom1ance playground. The C70 is loaded to its waistline with standard features and offers no less than 14 exterior colour choices and three cloth top colours. Some are pretty pukey - how about dark olive pearl with powder blue top. If being seen with the top down isn't personal enough, you can customise the interior, with more than a dozen leather and suede combinations to choose from.

Performance is not the priority. The coupe, clocking 0-1 00km/h under 7 seconds, fulfils the need. The cabrio is more cruisey and kicked back. Volvo went soft on the suspension settings to improve ride comfort over the C70 coupe. "The coupe is our pace-setter," says Lindskog, "The cabrio is our image-maker. There was no need to give it performance handling." Don't get the wrong impression - the C70 cabrio outtums and outdrives the S70 TS, even though it shares most of its suspension, brakes and platfom1 with the sedan.

Softer than the S70 TS, the cabrio handles overall much better, neither wallowing nor wandering through turns and is surprisingly obedient in reacting to the wheel. Where the coupe feels hard­strapped to the road, the cabrio's suspension compliance helps hold rougher roads and offers polite feedback through the steering. Overall, the suspension is marginally better controlled than Saab's much improved 9-3 - but the BMW could be its match. 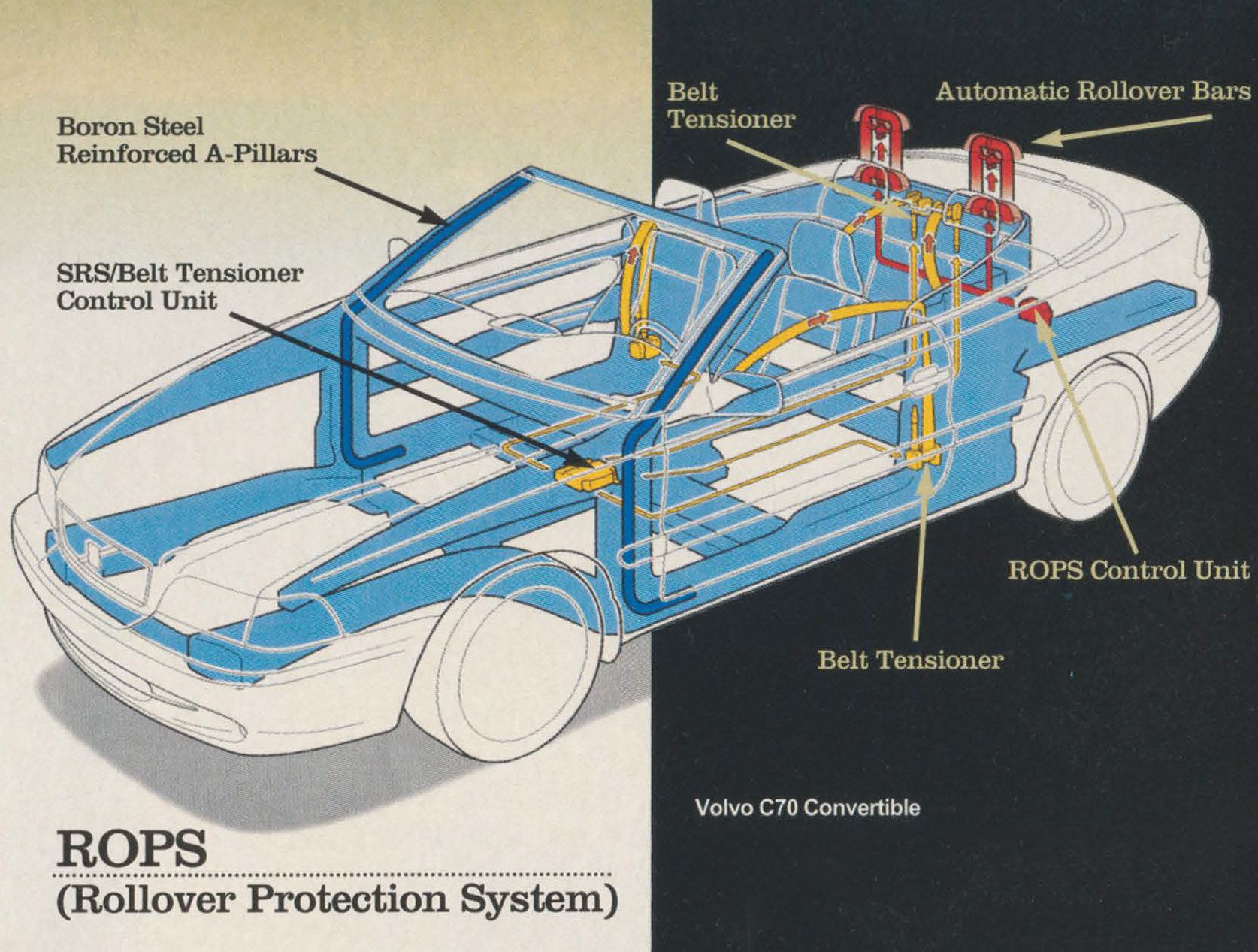 A lot of the C70's road holding is tyre - 17in alloy wheels and grippy 225/ 45 Michelin tyres correct many of C70's front-wheel drive flaws.

Don't expect to fit much in the boot. That's where the roof goes. The Porsche Boxster's is quicker; the Saab 9-3's is quieter; the C70's stows away invisibly leaving one of the cleanest bodylines in the business. Select Park, let off the handbrake and push a single dash­mounted button. Nothing else. No clasps to unlock and lock - it's automatic. Once the top's down, crank Frank through the awesomely powerful sound system armed with two tyre­sized subwoofers with mid­range and tweeters planted around the place.

Back to safety. Should the cabrio get tipsy, past 60 degrees, two precautionary things happen - twin rollover hoops mounted behind the rear seat spring out and the seat belt pretensioners tighten. Even though the front windscreen looks fragile, it isn't. It alone can support the weight of the rolling car through reinforced A-pillars located through the door frame to the sill. If you get to 60 degrees but don't tumble, the rollover hoops can be reloaded by a Volvo dealer, or you can do it yourself. 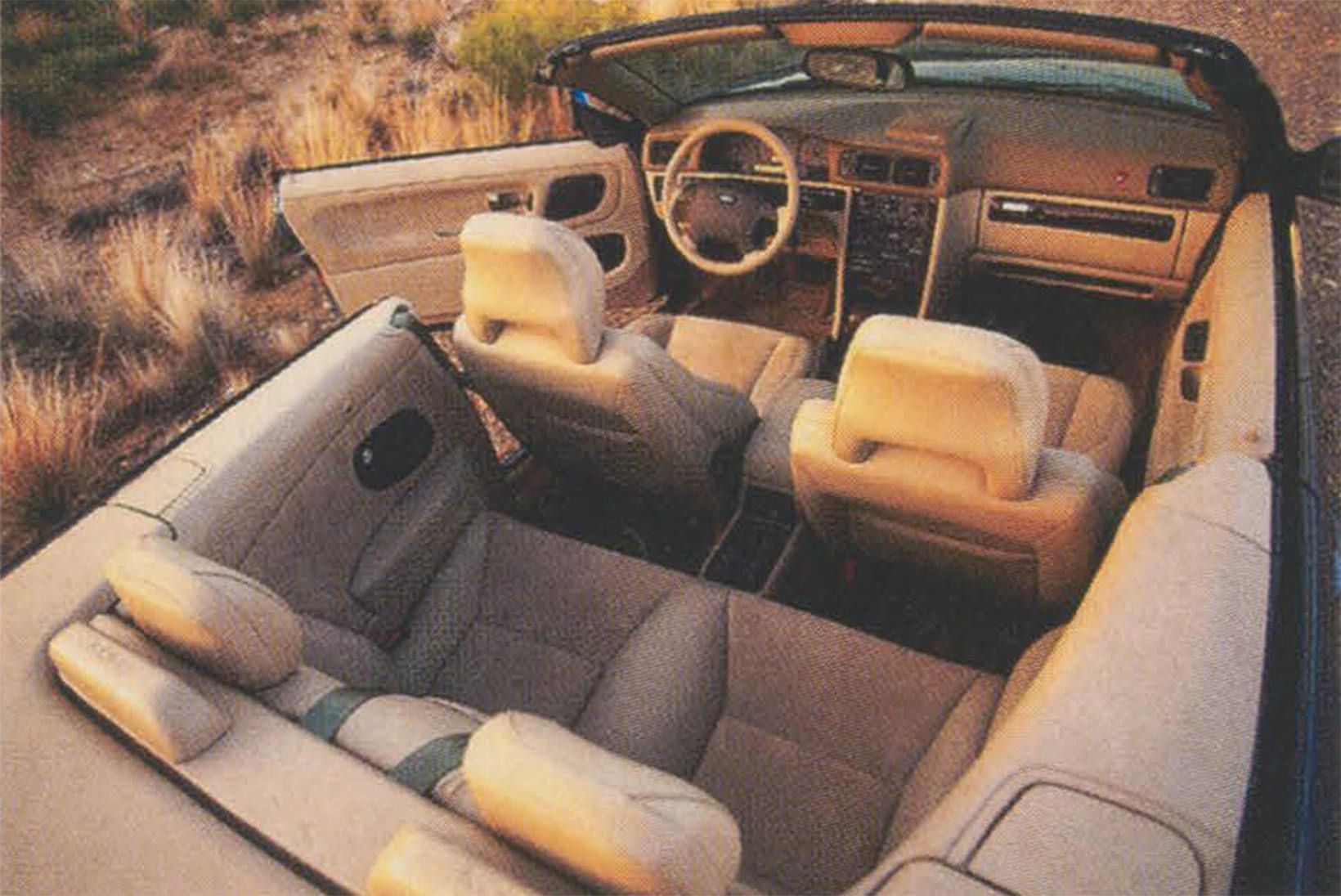 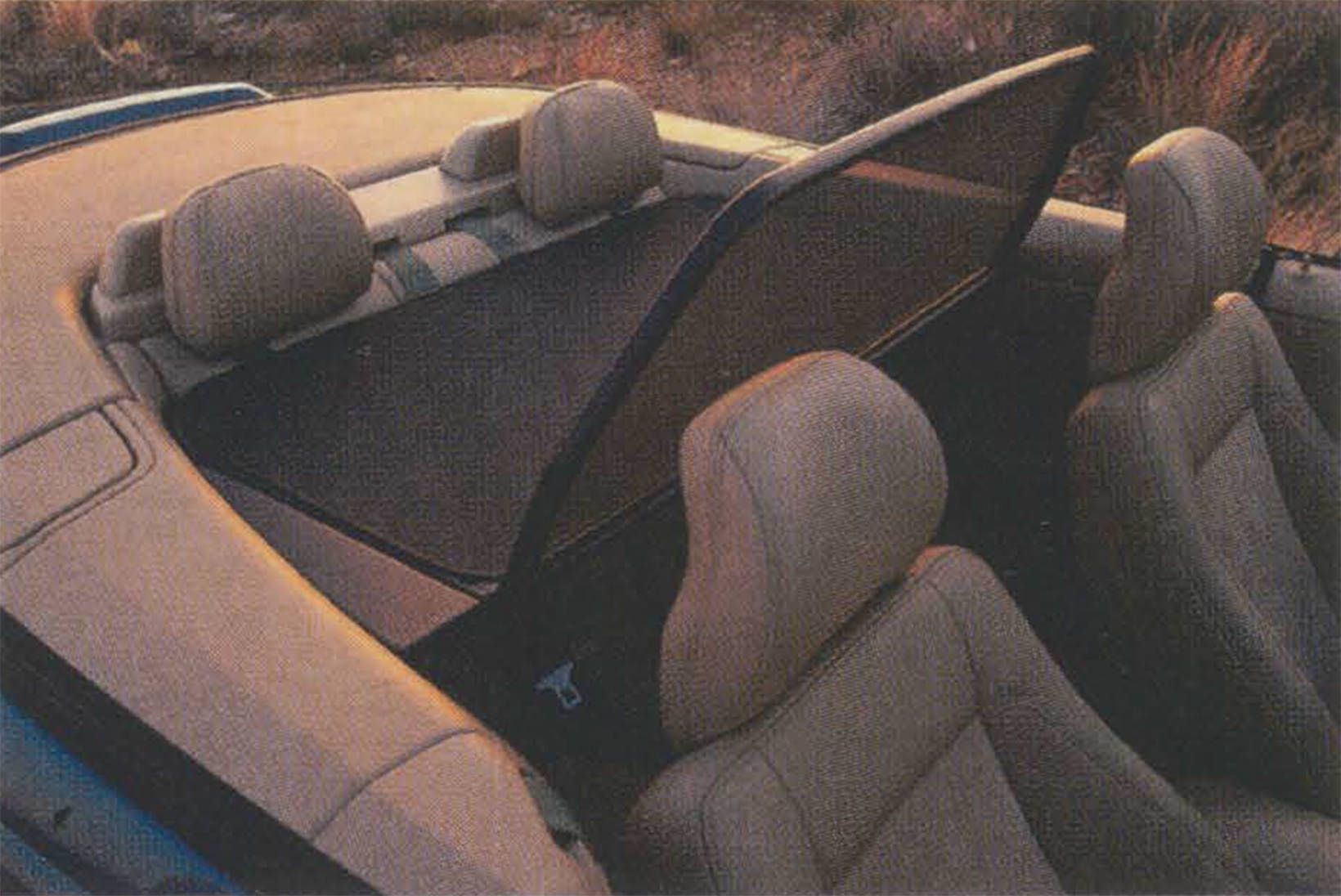 Like the coupe, the cabrio is a true adult-sized four-seater. Templated off the coupe, rear seat head (hood up) and legroom are the same, as are backrest and lower cushion shape and size. Some tacky bit blemish the classy interior, such as the big, weird-looking windbreak contraption that could double as a prawn net. You're supposed to erect this thing (tools not provided) and attach it behind the front seats to block the wind messing your hair. If you can't stand the wind, stay out of the cabrio. Although, after a few hundred kilometres, I must admit a flapping seat belt had tenderised my shoulder.

With the top-up, most modem cabrios are as quiet as coupes. Not so the Volvo. Terrible wind noise creeps through every seam and into your ears to torment your soul. At 110km/h, conversation turns to shouting. ln this area, the Volvo is far infe1ior to both the Saab and BMW.

Short-term, the top must be fixed. But looking long-term, there are few points worth bitching about. We'll leave that to Saab and BMW.

Protect your Volvo. Call Shannons Insurance on 13 46 46 to get a quote today.