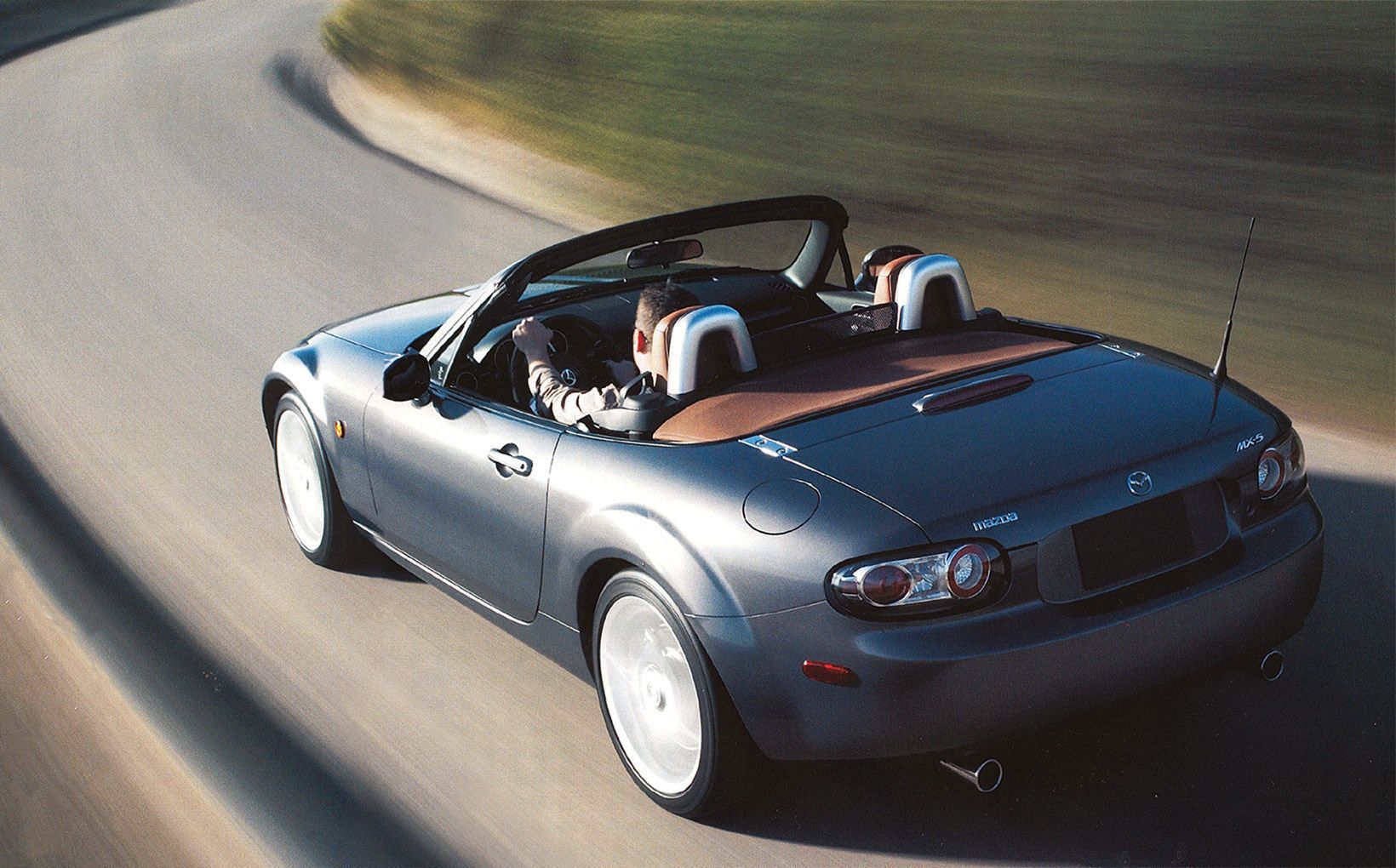 As the cover slides off the new MX-5 in Mazda's Saka design studio in Hiroshima, there is profound silence. For agonising moments there is not a sound in the semi-darkness of the huge, high-ceilinged room. Then the chatter, low at first, begins. Motoring journalists the world over don't, as a rule, applaud when a new car is revealed. Even when they're seeing it more than three months ahead of its official unveiling at the Geneva motor show. Clapping isn't a response that signals cool objectivity. Instead, in the many languages of motoring, they share first impressions with each other. Soon the murmuring has grown to hubbub. 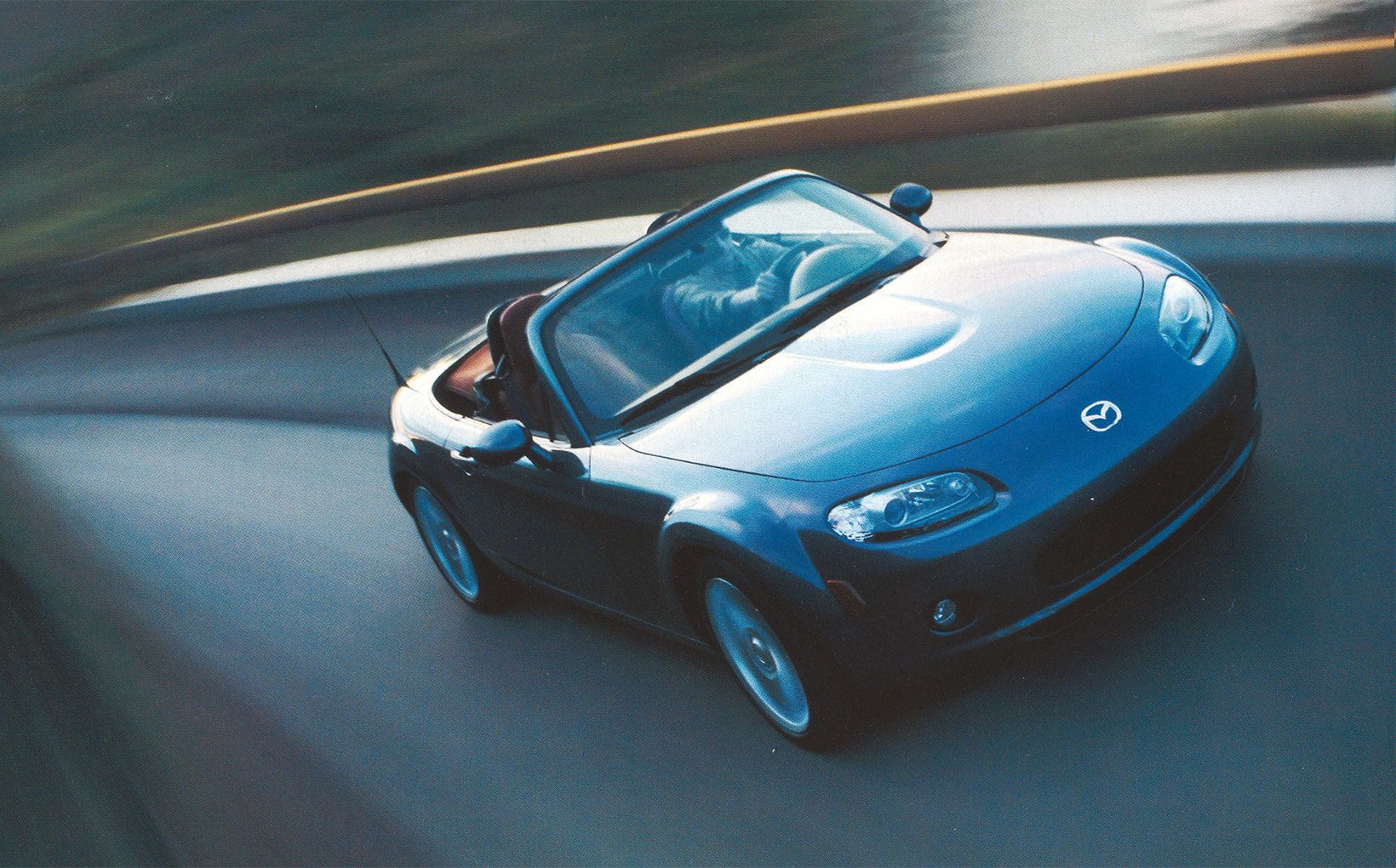 Any manufacturer unfortunate enough to have such a car in its line-up must be prepared for condemnation come model-renewal time, no matter what. Those who see too little change will roundly condemn the car maker for lacking inspiration or guts, or both. Then there is the possibility of an even more serious accusation: that the car is obviously and hopelessly derivative of other designs. Avoid both of these, and there's still the risk that observers may see so much change that they instantly lament the loss of the essential spirit and philosophical purity of its ancestors.

Such intense scrutiny is to be expected, because people who care about cars care most of all about cars like the MX-5. It is the unchallenged epitome of the affordable, front-engine, rear-drive, two-seat soft-top sports car. Since 1989 it has put a precise, polished, and sublimely responsive driving experience within the reach of the masses. In 16 years, more than 700,000 MX-5s have been sold all over the globe, earning the car a place in the Guinness Book of Records as the world's best-selling roadster ever.

Add it all up, and you're looking at serious pressure for the people who worked on the third­generation MX-5. So the car revealed as the cover falls softly to the floor is the result of months and years spent suffering acute performance anxiety. 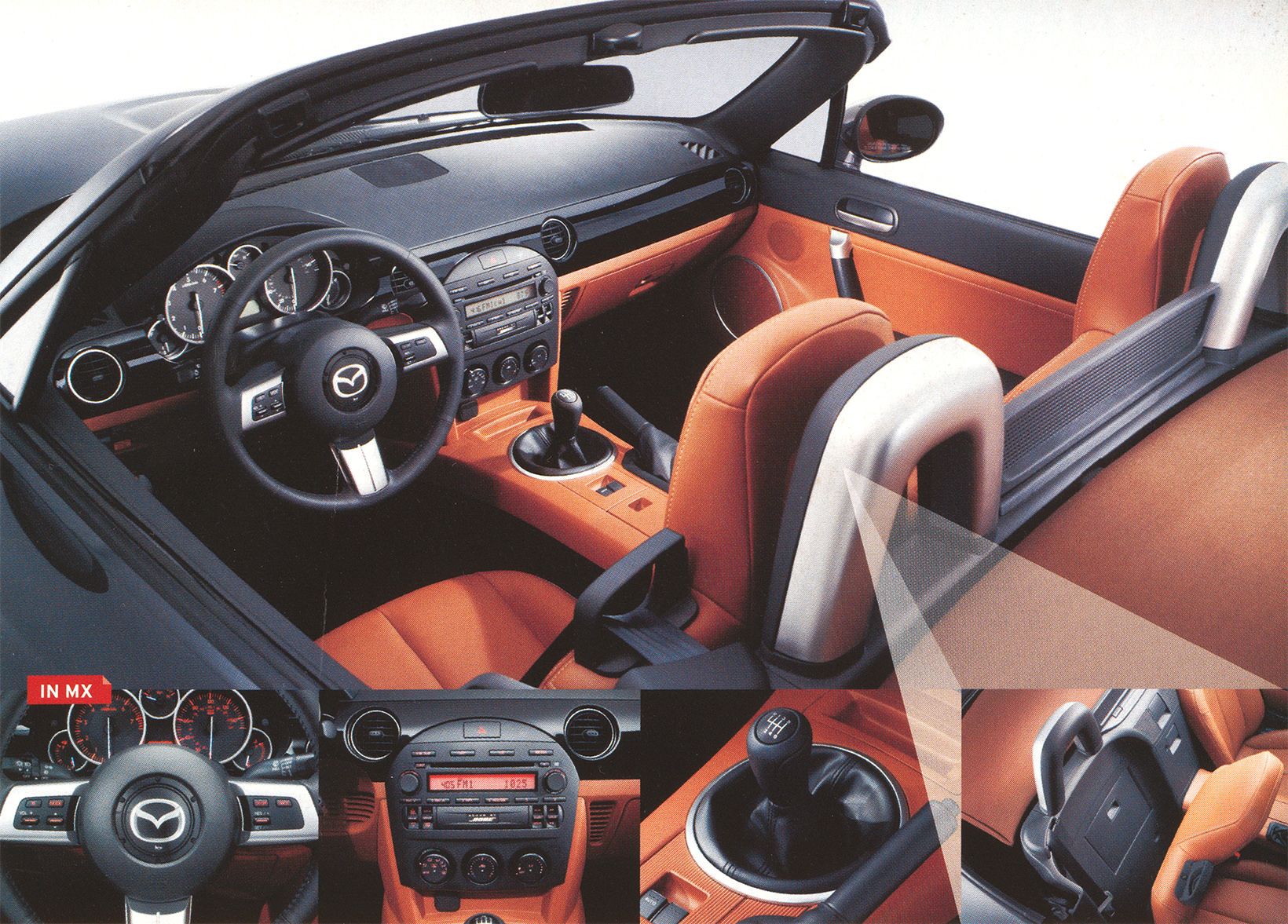 At a glance, it's clear that the metallic-grey car isn't a timid, evolutionary step forward like the second-generation MX-5. This is a less delicate, more dramatic design. More masculine, too, partly a result of changes to the car's fundamental proportions. The new MX-5 is significantly wider new model's broader, more upright stance that makes the difference. The MX-5's fundamental proportions have been significantly altered. The first- and second-generation cars were waisted, feminine and visually balanced. This one, with its shallow wedge profile, is tense and taut, with greater visual weight at the rear. The car's details are clearly intended to reinforce the family relationship with the RX-8. Key points here are the U-shaped depression in the bonnet, echoing the triangular motif in the engine cover of the rotary-engine four-seater, and the similar technique used to emphasise the wheelarches.

Key feature of the soft-top is a single, central locking latch, instead of outboard pair.

First impressions on dropping into the driver's seat are of a roomier and richer environment. The increase in width delivers noticeably more shoulder room. The footwell isn't cramped, and the position of the windscreen's header rail promises greater headroom than ever. Ergonomics are much improved by the addition - at last! - of a height-adjustable steering column. This is going to be a much better car for taller drivers than any earlier MX-5. Where the earlier­generation MX-5s featured sombrely functional interior treatments, the new model is different. In particular, the three brushed-aluminium spokes of the steering wheel and the strategic employment of glossy piano-black plastic bring a little elegance to the variety of materials on display in the cockpit. 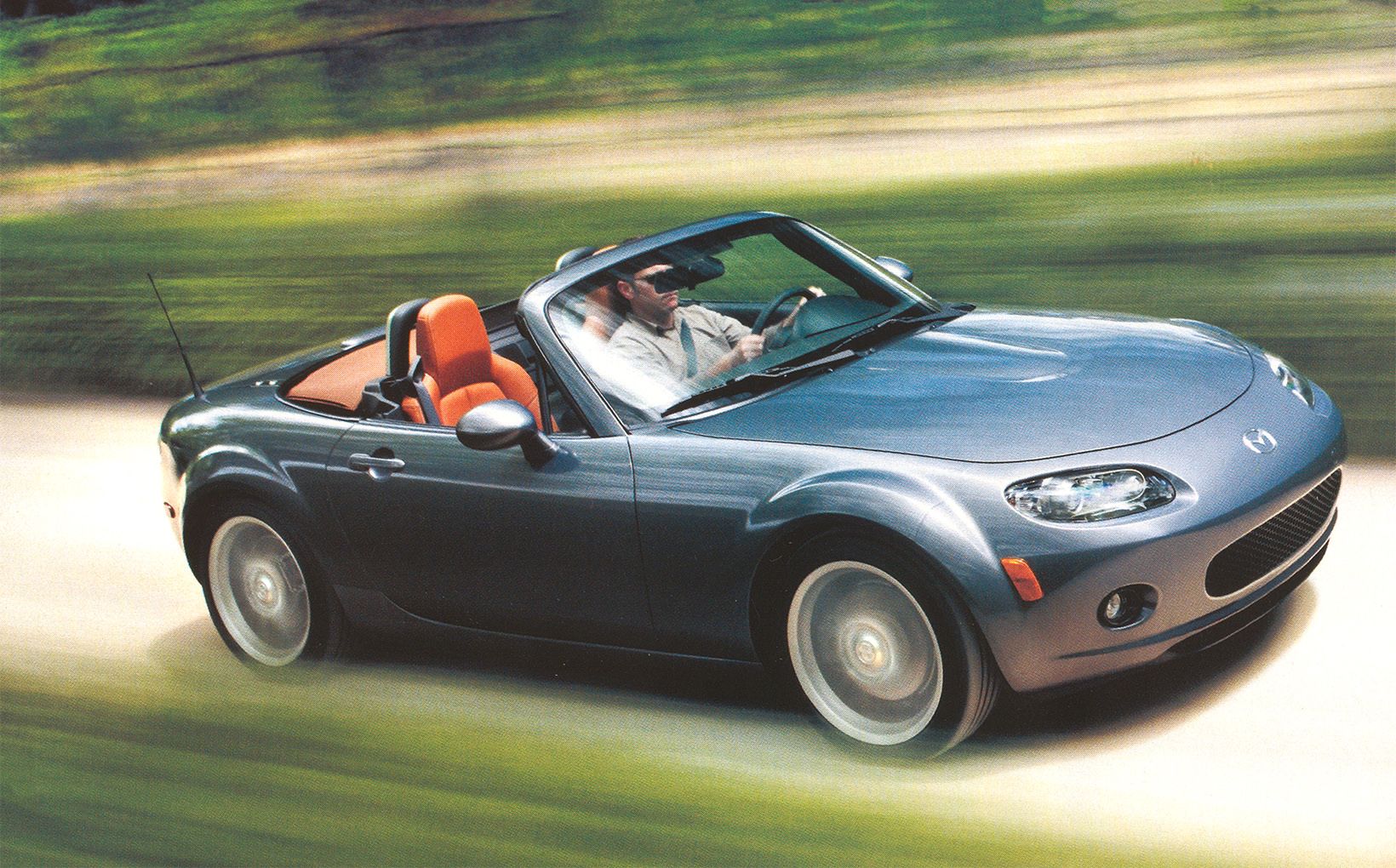 The steering wheel is notable for more than just its shiny spokes. There's an airbag, naturally, but the horn button is where it should be in a sports car - in the wheel's centre. This is made possible by a special donut-shaped airbag. This is only one of the car's four standard 'bags. As well as a second 'bag for the passenger, there are combined upper-body and head-protection 'bags in the backrest of both seats. As well, for the first time, there are standard roll-over bars behind each seat.

Safety hardware is never unwelcome, but 'bags and bars are hardly the primary reasons for anyone choosing to buy an MX-5. What matters more is the car's intuitive responsiveness, satisfying precision, and outright agility.

MX-5 program manager Takao Kijima obviously knew that any diminution of the car's dynamic ability would be unacceptable. There was to be no loss of jinba ittai, the Japanese phrase that expresses a sense of unity between horse and rider. It's rumoured that Kijima was so determined to create a car that was a joy to drive that he set his team objectives that were, quite literally, impossible to meet. He apparently set an official weight target of 1000kg, knowing it could not be done at the same time as satisfying every global requirement for crash safety. 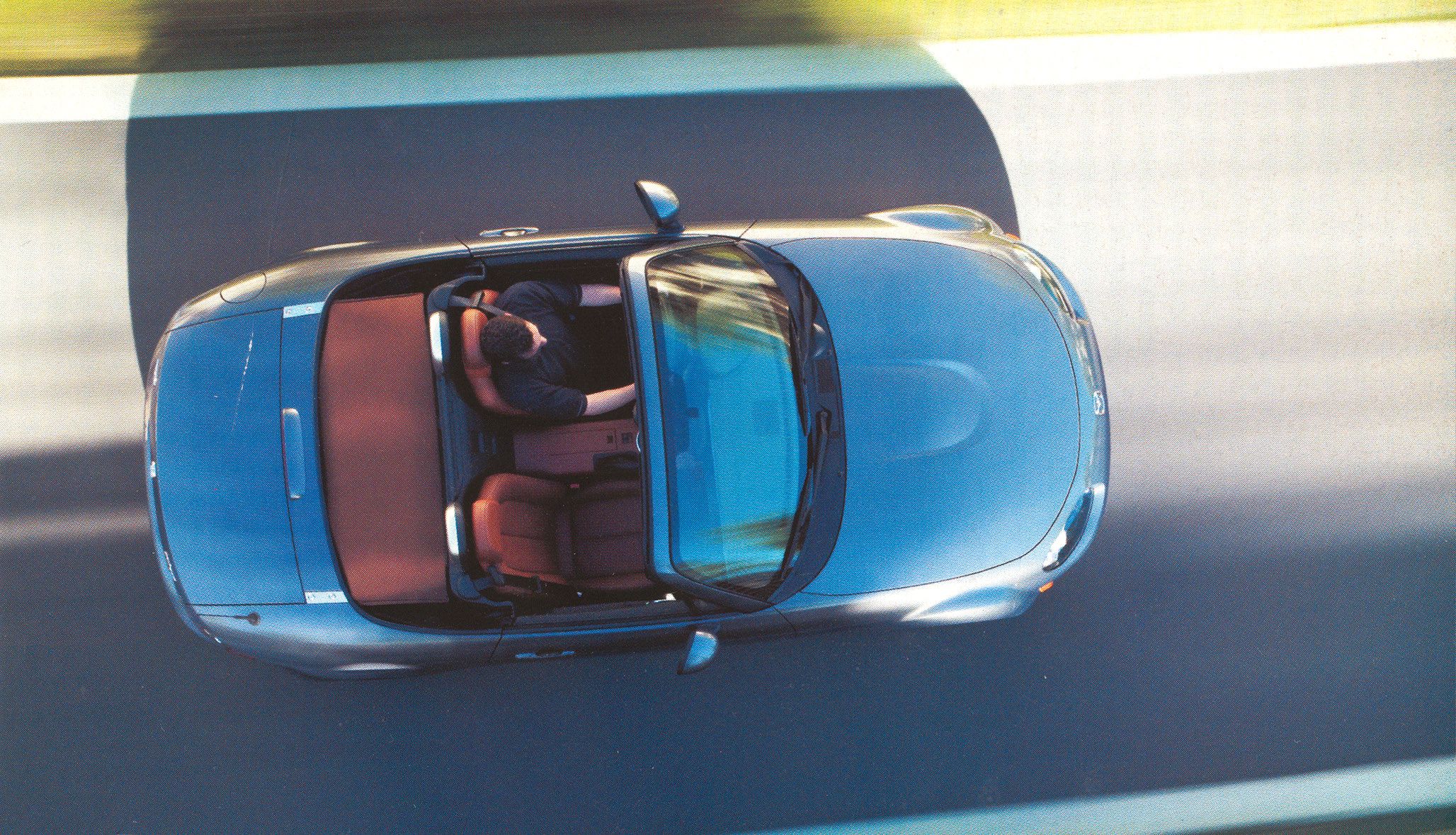 New MX-5 is a more dramatic design: more masculline, too, partly a result of the changes to the cars fundamental proportions.

According to engineer Nobuhiro Yamamoto, the weight of every component of the new MX-5 was subject to "gram-by-gram" review. They achieved results. Yamamoto says that by using ultra-high- and high-tensile steel in key areas of the new body structure -wider and 50 percent more rigid in torsion - some 22 kilos were saved. "It was painful for research engineers," Yamamoto recalls with a grimace.

Count on the weight figure of the new MX-5, when it is officially announced, being very close to that of the model it replaces, at 1100kg or a little less. This is a remarkable achievement. Weight distribution is 50:50 front-to-rear.

While Europe will receive a 1.8-litre MX-5, those that arrive in Australia next October will have 2.0-litre engines. It's a longitudinal version of the MZR engine that's installed transversely in the Australian-market Mazda 3 Neo and Maxx models. Measures such as a raised, 10.8:1 compression ratio and free- flowing inlet and exhaust systems lift power and torque figures compared with the front­drive small car. Maximum values are 118kW at 6700rpm and 188Nm at 5000rpm. The engine is tilted 10 degrees to the right in the engine bay. 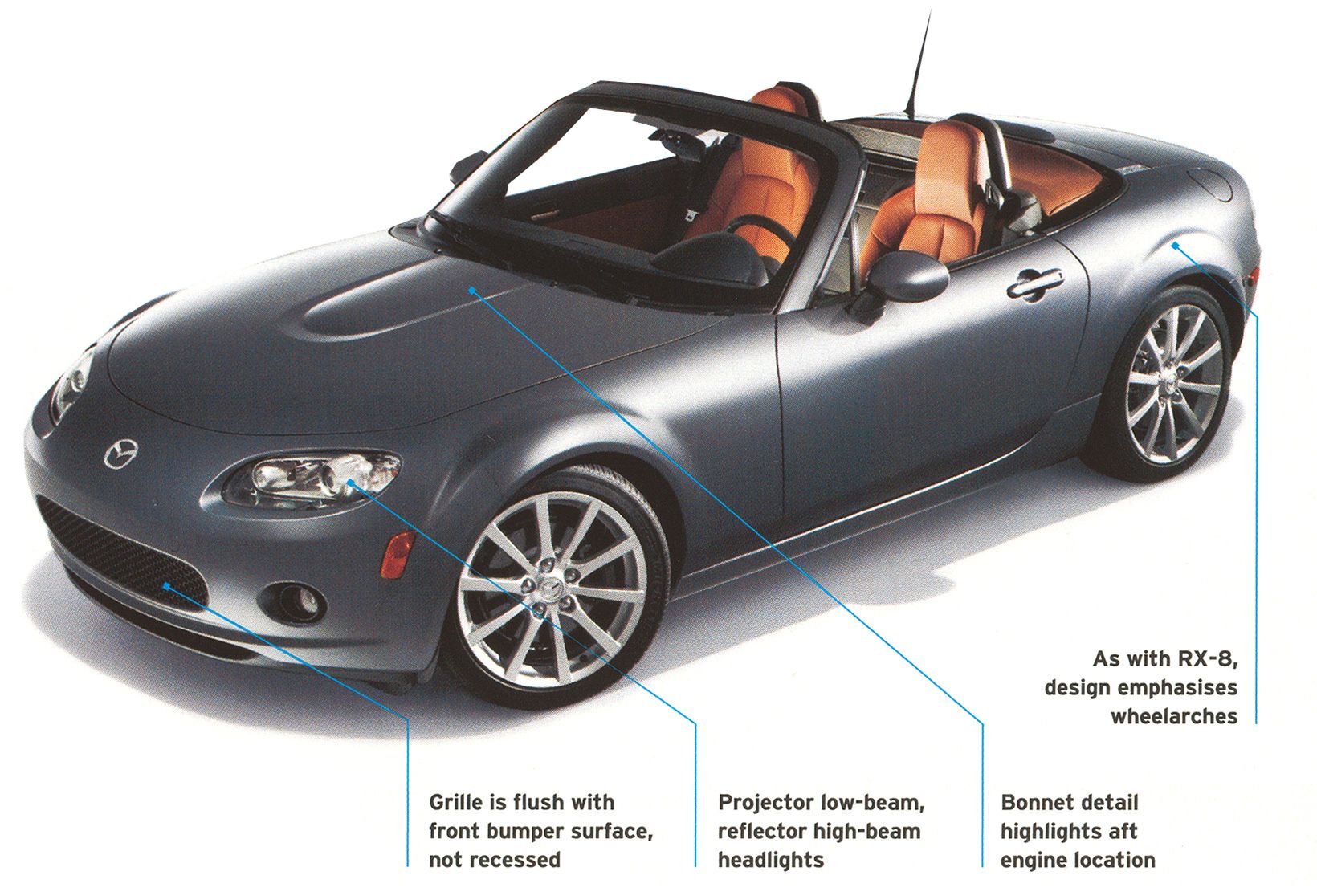 Other modifications were aimed at improving the engine's responsiveness, such as lightening the flywheel and carefully calibrating the engine's electronic throttle. As with previous MX-5s, the rear of the transmission is rigidly connected to the differential. This, too, increases the feeling of accurate, swift throttle response by minimising relative motion between these two components. Both manual and automatic transmissions for Australian-market cars are six-speeders. Mazda extensively researched the ergonomics of the manual transmission's shifter mechanism, and claims to have created the slickest 'box ever installed in an MX-5. The automatic, which will feature a pseudo-manual mode with activation either by shift lever or steering-wheel-mounted paddles, is all-new. It is destined, in time, to also appear in the RX-8.

Suspension front and rear is essentially the same as the RX-8. At the front are double A­arms, at the rear a compact multi-link design. There are important differences between the rotary-powered four-seater and the four­cylinder two-seater. There are the expected fine differences in geometry and bushing specification, but, for instance, where the RX-8's rear suspension has rubber mounts interposed between subframe and body, the MX-5's is bolted directly to the body structure. 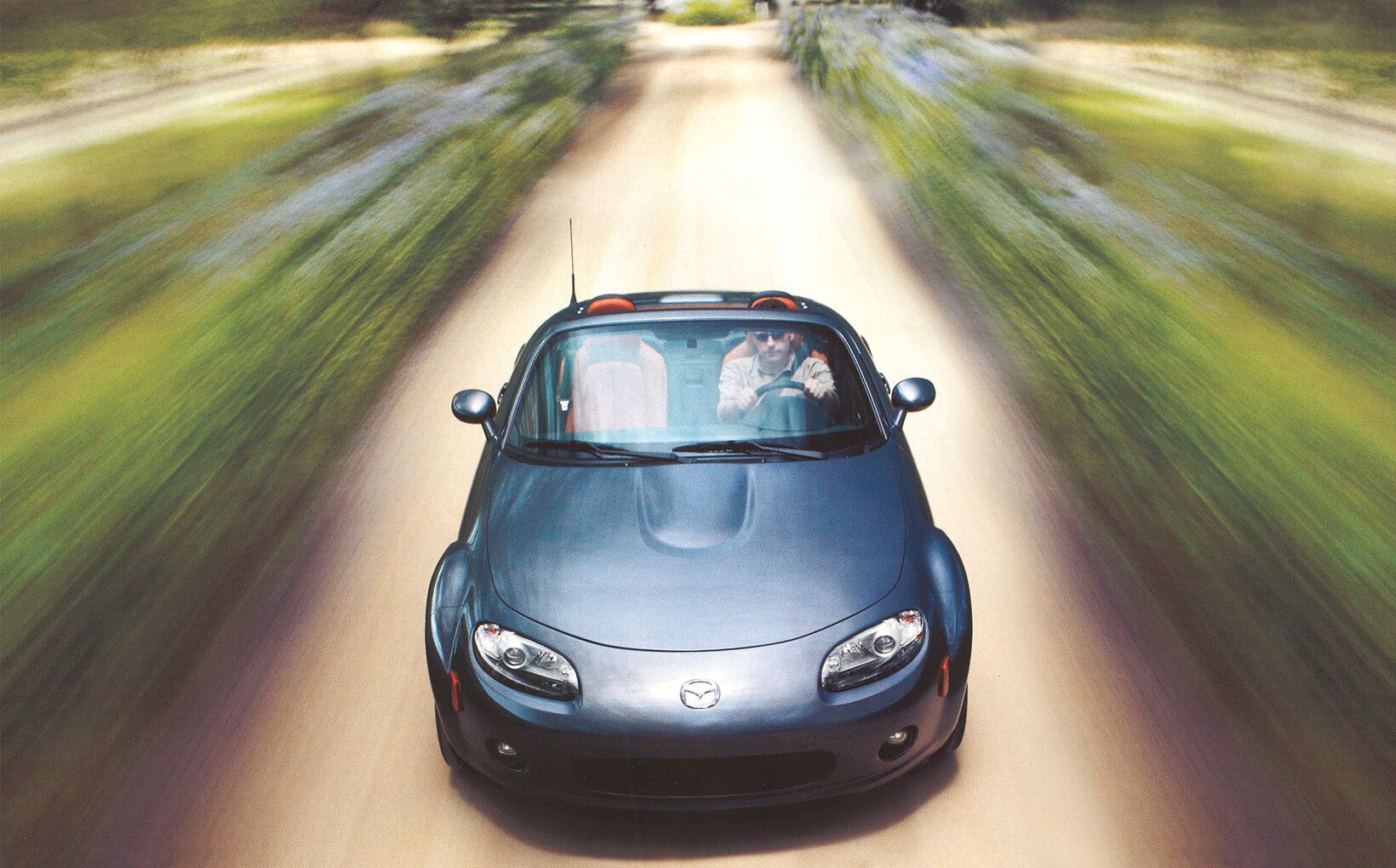 The suspension is essentially the same as the RX-8's

Braking should be better than ever. The front discs are 20mm larger in diameter and caliper stiffness has been significantly increased. Shorter stopping distances are promised.

It will be mid-year before we are permitted to drive the new MX-5 at its international launch in Hawaii. And it won't be until October that it will reach Australia (at a price that should be close to $45,000), enabling us to drive it on roads we know.

All the signs point to the new MX-5 being the best ever. But until we've given its jinba ittai a taste of the horsewhip, we can't be absolutely certain. So we'll maintain the silence and save the applause until then, okay?