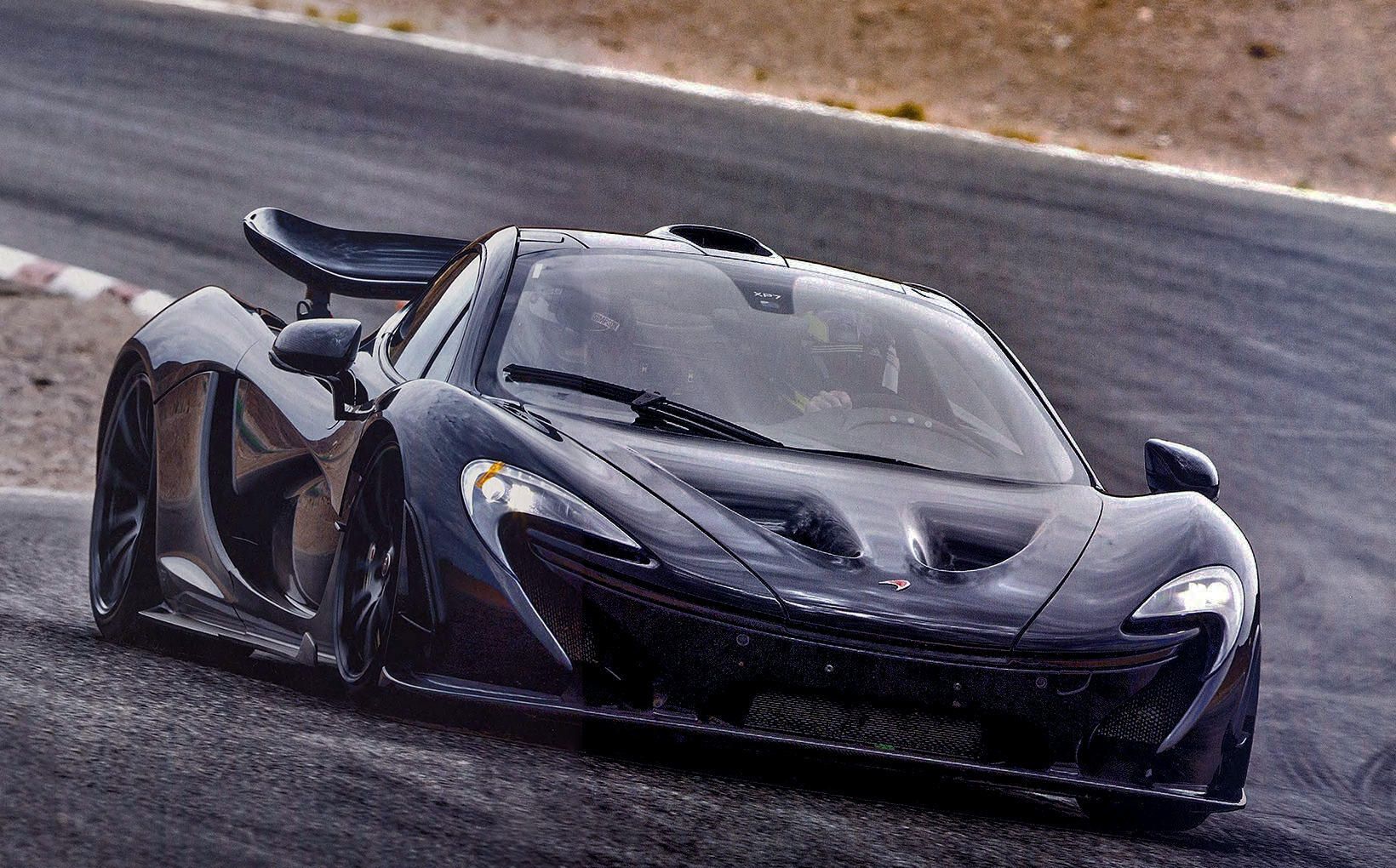 I love circuits like this. There's a sun bleached charm to the venue, which was first used 60 years ago. Earlier, in the circuit office, I spied a list of track lap records, which shows that in February 1982 a certain Mr N Mansell posted a 1min 6.3sec effort, which equates to an average speed of 219kmh. For a few moments I quietly contemplate what level of bravery and commitment it would have taken to lap at that pace in a brutal, stiffly sprung, early 1980s Formula 1 car.

McLaren's test today is not about records. The main objective has been to simulate how the P1 will behave when it is taken on to a track by one of the 375 well- heeled connoisseurs who'll take ownership. McLaren's new challenger is designed to be the world's best driver's car, equally at home on the road or track, so it's natural that an enthusiastic owner might want to engage the P1's full-fat Race mode and test his capabilities on a circuit. 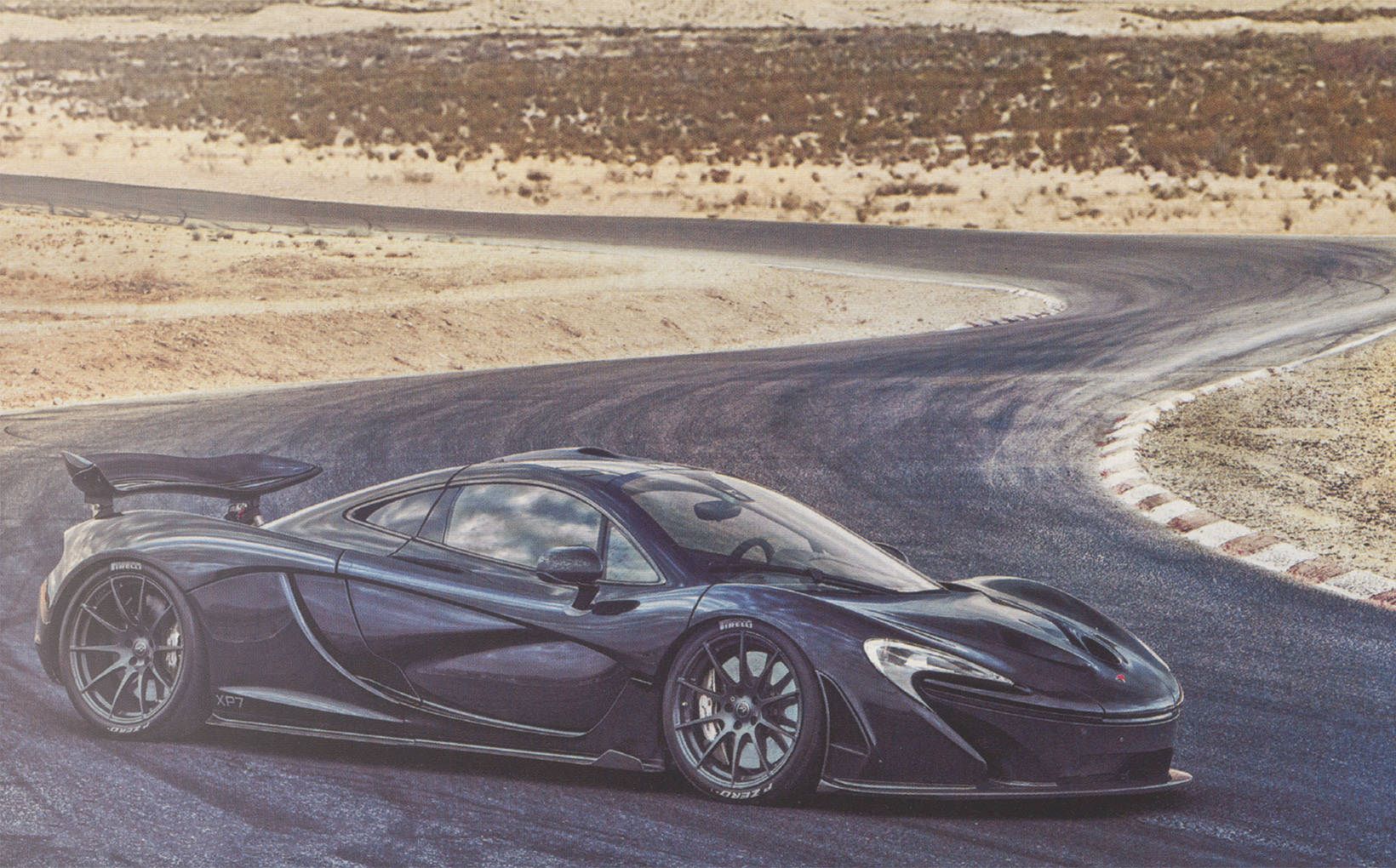 McLaren's new challenger is designed to be the world's best driver car, equally at home on the road or track

Quaife, instructed to drive at a set pace for data- gathering purposes, has conscientiously driven lap after lap. With the test team satisfied and the track curfew fast approaching, there's just enough time for him to cut loose and exploit more of the P1's prodigious power and torque and its aerodynamic capabilities. Unfortunately for the 27-year-old, he's now got my extra ballast to deal with.

Although McLaren's engineers are moving into the final phases of the hypercar's development, few outsiders have been allowed to ride in any of the prototypes. This car, codenamed XP7, is one of several preproduction versions being used to validate the reams of simulation data generated during the car's extensive, expensive development.

As much as I'd love to drive the P1, I'm secretly glad that the opportunity isn't on offer here. For three weeks the test team has been working from dawn until way past dusk to hone this car. Although their test in the US is nearing an end, I don't think they would take too kindly to a nervous journalist bending their car.

Besides, getting the chance to sit alongside one of McLaren's own testers - professional racer Quaife has been part of the development team for almost two years, working with McLaren's chief test driver, Chris Goodwin - is a real treat.

This well-travelled test mule is configured to collect heating, ventilation and air conditioning (HVAC) data, so is a little porkier than the 1400kg definitive production car will be, and isn't equipped with the most up-to-date aero kit. Nevertheless, finished in a stealth bomber-spec black paint job and sitting quietly in the pit lane in the California sun, the taut, toned lines of the P1 make it look worth every cent of its US$1,350,000 price tag.

Helmet on and seatbelts fastened, I survey the cabin, which is close to production spec. Looking beyond the data-gathering paraphernalia, some elements of the P1's interior are recognisable from the 12C, such as the centre control interface and the turbine-style air vents, although everything is a lot more pared back. Before we set off, Quaife points out some of the key controls, such as those for the drag reduction and instant power assist systems, placed within thumb's reach on the steering wheel. There's also a switch to toggle between the driving modes that are key to the P1's ability to fulfil its wide-reaching brief. 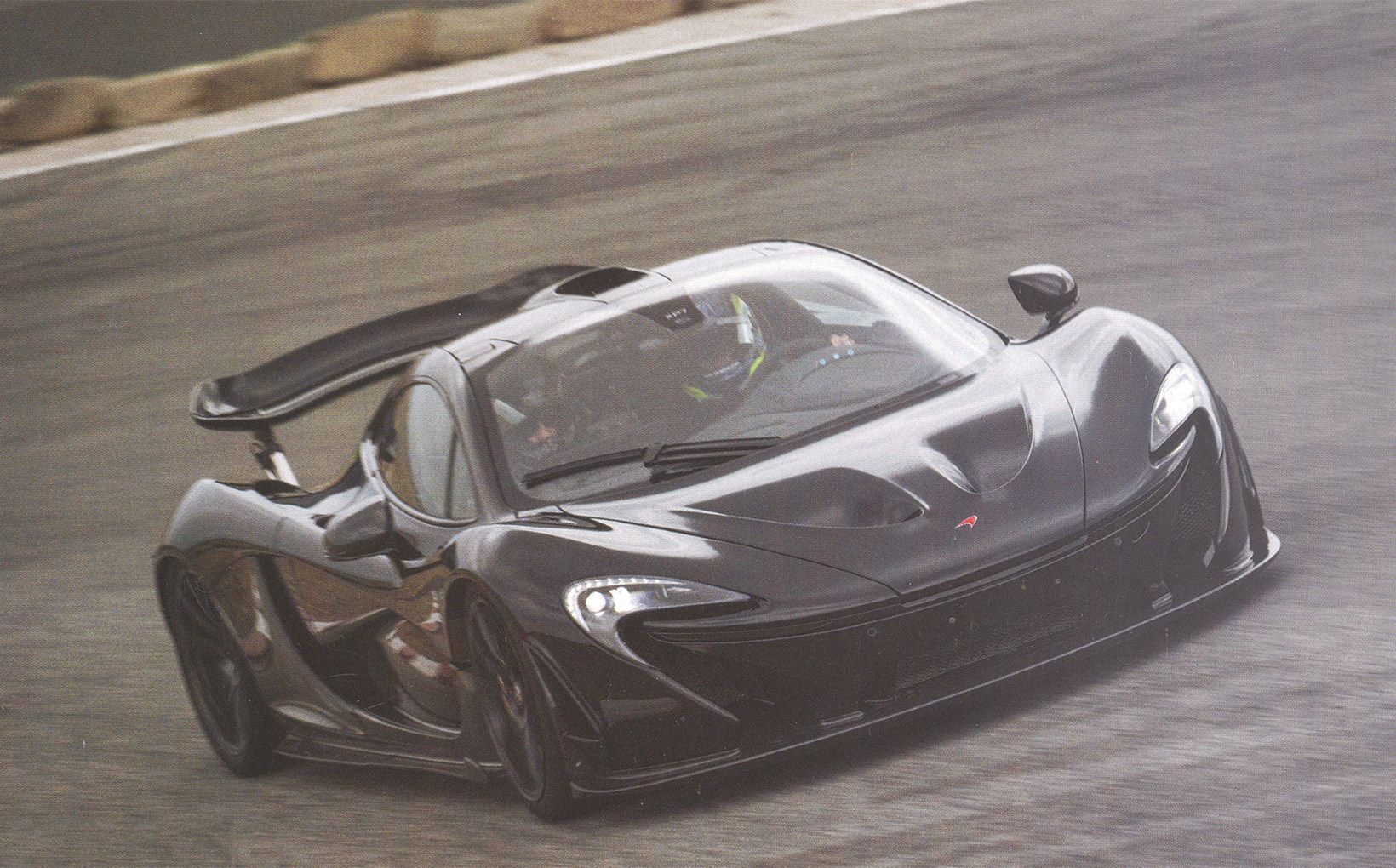 On track, the P1 is a steroidal, in-your-face monster. It will also make you revise your attitudes towards hybrids.

"The aim of this car is to be the best-handling sports car in the world, but we also want it to be very usable on road," says Quaife. "To combine those two elements is very challenging, as you can imagine. That's the beauty of our active panel, where you can switch through Normal, Sport, Track or Race modes. So we can go from Comfort on road, to turning up in the pit lane at a race track and switching to Race mode, where the car lowers, the wing comes up and it gives you more downforce."

With that, Quaife guns the P1 down the pit lane and on to the bumpy, dusty circuit. I'm shoved deeper into the bucket seat by a quite remarkable surge of acceleration. With 542kW on tap from the 3.8-litre twin-turbo V8 and a supplementary 131kW from the electric motor, I guess I should have been prepared, but I'm not sure you really can brace yourself for the kind of thrust that propels the car north of 100km/h in three seconds. Each time feels as much of an event as the first.

On track, the P1 is a steroidal, in-your-face monster. It will also make you revise any pre-conceived attitudes you may hold towards hybrid cars. It's noisy, with a hearty bellow from the twin-turbo V8 and a pleasing 'whooomp' from its wastegates.

For me, the stand-out sensation is the level of grip. Turn one at Willow Springs, Castrol Corner, is a banked 90-degree left-hander. It dips and blends into a cambered right called the Rabbit's Ear, which goes on forever and involves at least two apexes. 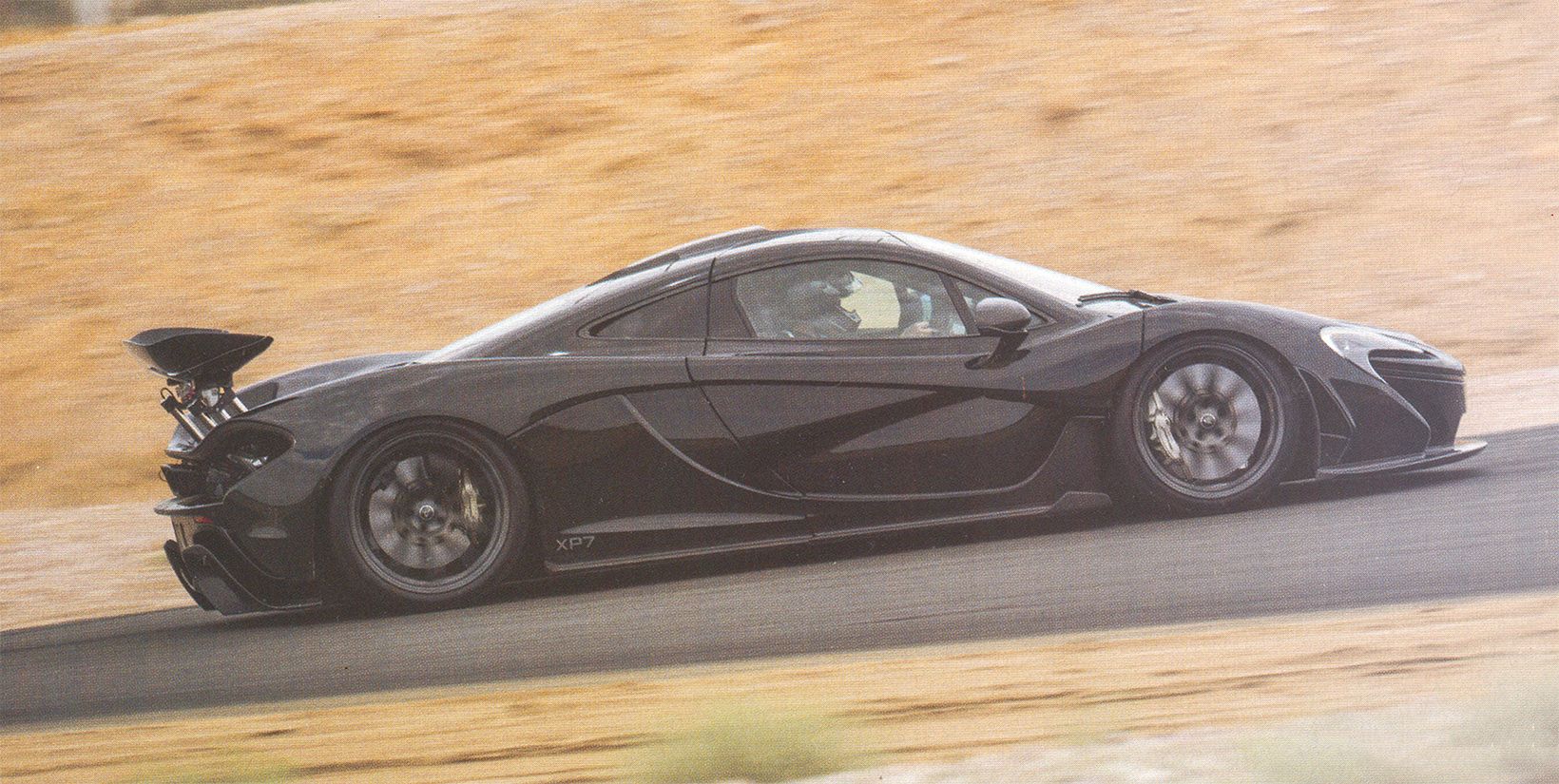 The P1 is impossibly fast through this section. On our first flying lap I'm convinced that Quaife has carried too much speed into turn two and we're going to understeer wide into the scrub. My brain cannot compute that the car will keep on gripping, even with its bespoke Pirelli P Zero tyres. But grip it does, without a hint of losing its composure. In certain circumstances, the P1 can be made to break traction. Out of a tight, uphill left hander, with the car travelling at - relatively - low speed, Quaife stabs the throttle and lets the back end slew pleasingly sideways for a millisecond.

We swing downhill and left. Next comes the most spectacular turn on the circuit, the one where the effectiveness of the P1's aerodynamics package is truly evident. Turn six, Monroe Ridge, is a very quick right- hander over a crest which, from the low-slung vantage point of the Pl's seats, is taken blind. Stray off the racing line here and there's a real danger of drifting wide off the circuit on the far side of the crest. But the McLaren is quite simply nailed to the ground.

I'm not sure what three-figure speed we hit on the subsequent straight, but we reach the next corner lons before the P1 runs out of acceleration I glance across at Quaife, who looks calm, his steering inputs fluid, swift and positive. The final section of the track involves two right-handers that blend together into one gradually tightening curve. It's a long turn, and the P1 feels comparatively docile through here. Quaife is waiting, waiting, waiting... then as soon as the pit straight looms into view, he squeezes the throttle and lets the car run wide out to the kerb on the exit. 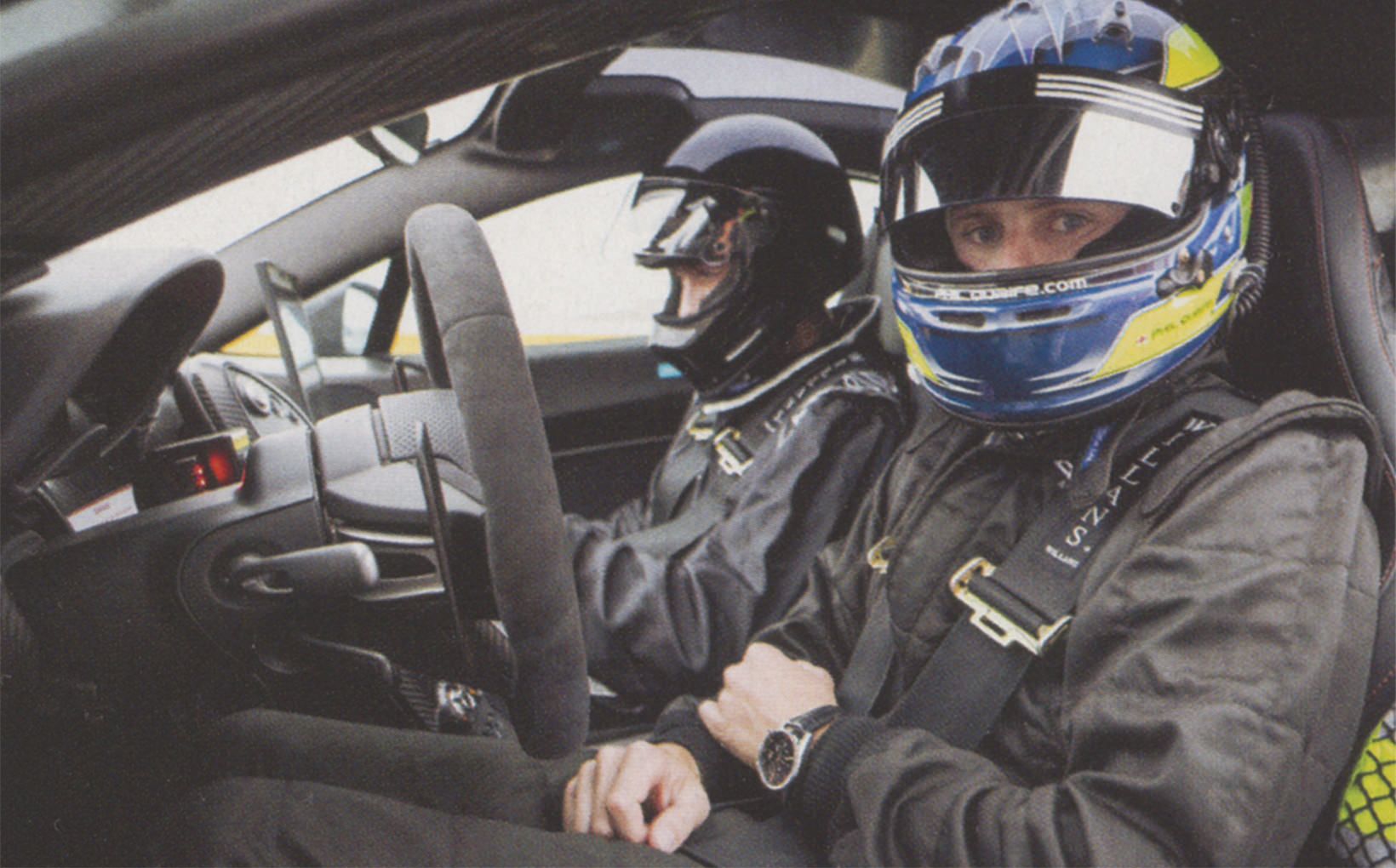 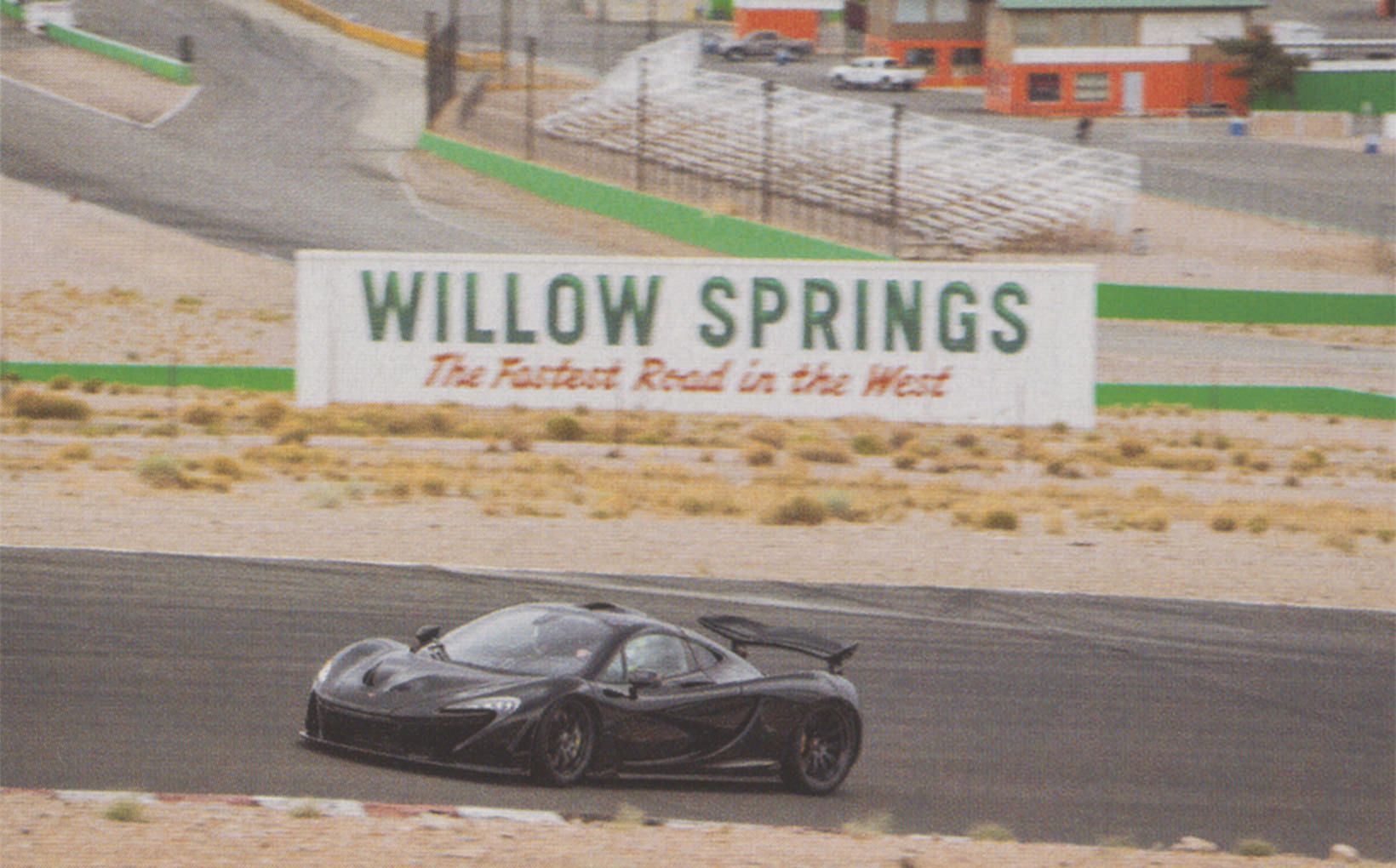 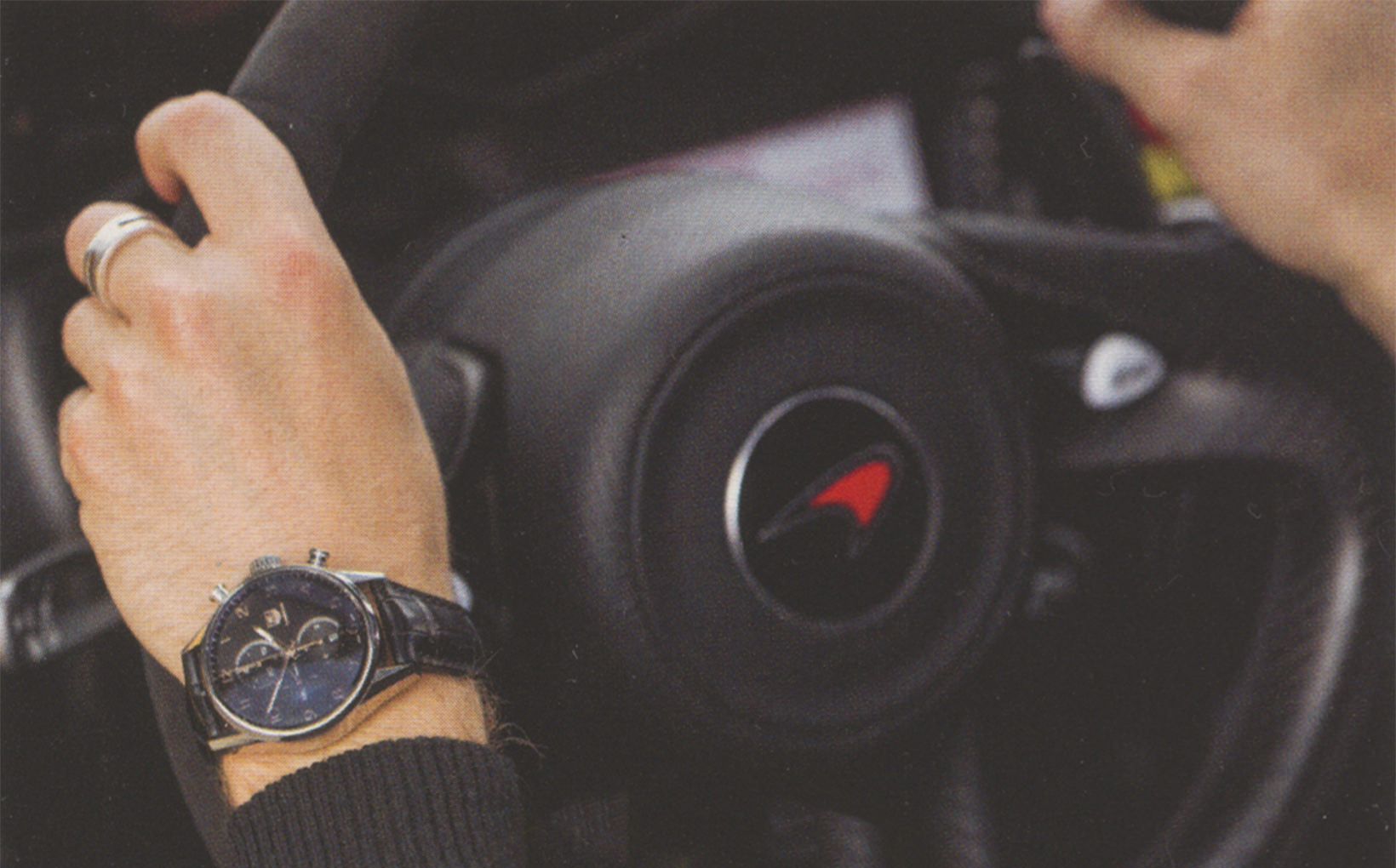 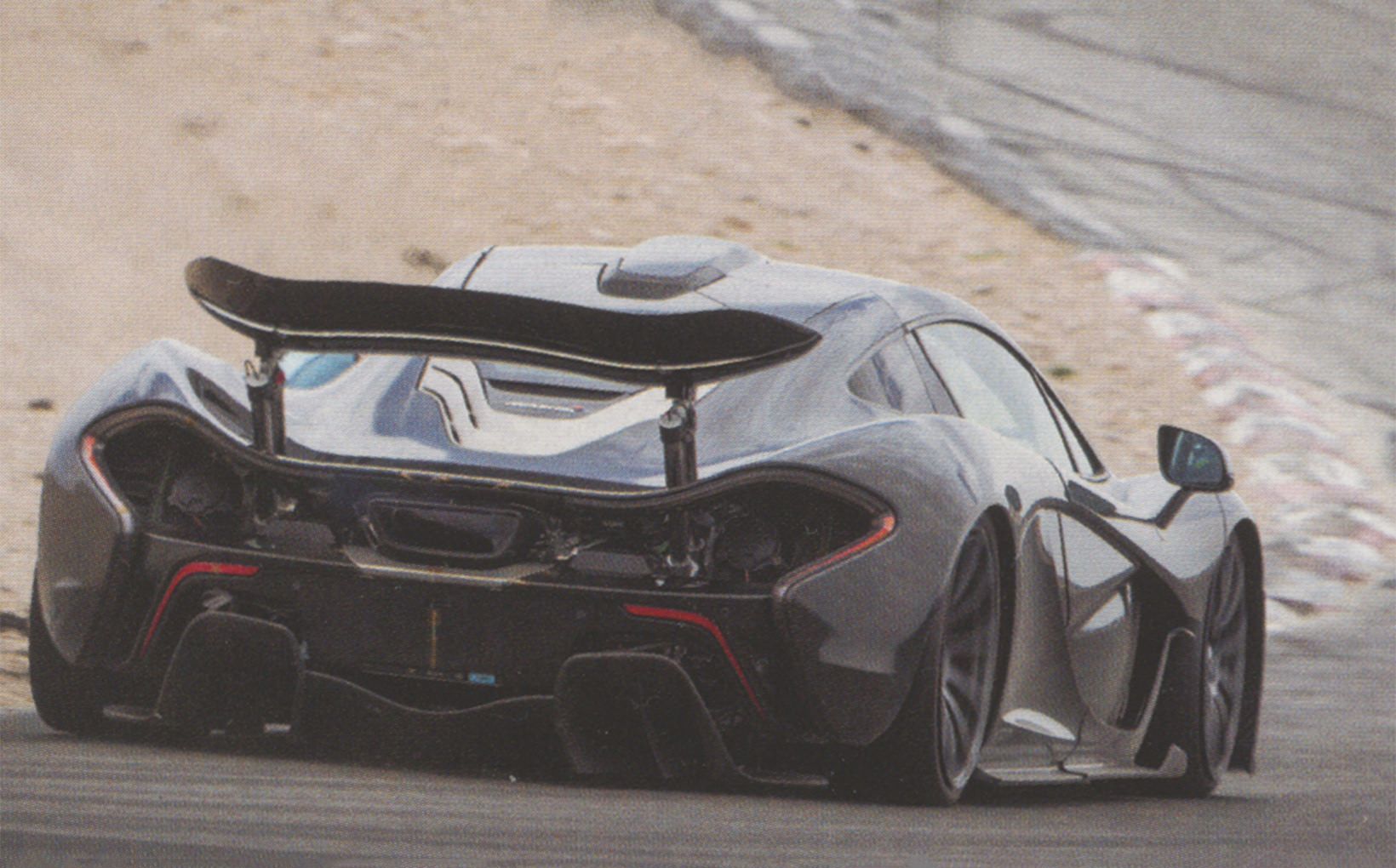 We zap across the line before the looming Castrol Corner demands heavy braking. The stopping power of the P1's brakes, developed by Akebono and using carbon-ceramic discs infused with ultra-tough silicon carbide, is phenomenal.

I've ridden shotgun in World Rally Cars, BTCC machines, a Dakar Rally truck and a Le Mans winning sportscar. All felt quick in a brutal way, but competition cars are designed with a single-minded purpose: winning, at all costs. As long as it succeeds, it doesn't matter whether d lace cars engine sounds like a bag of broken spanners, or if the shutlines aren't millimetre perfect.

The P1's purpose is different. To be simply fastest around a track is not enough; it must thrill all of its owner's senses and also provide the kind of creature comforts demanded by the well heeled, no-compromise individuals who have already paid their deposits at the McLaren Technology Centre. Every drive in a PI must feel like an experience, whether it's a hot lap of a circuit or a trip to the underground lair.

My fleeting laps alongside a man who already knows the P1 inside out suggest it is a car that's more rewarding to drive the more you push. There's much to play with - fl-style power and aero boosts, a surfeit of low-end acceleration and reassuring levels of high-speed grip, to name a few - that an owner could grow with the car, gradually exploiting more of its potential as they become comfortable with the immense performance on tap.

We just have to hope that most of those 375 enthusiasts who are fortunate enough to afford the Uss1 350.000 hypercar don't lock their cars away ill a private collection.

The P1 is a machine that's made to be driven, and driven hard.

Aussie F1 ace gets his very own special edition ro...