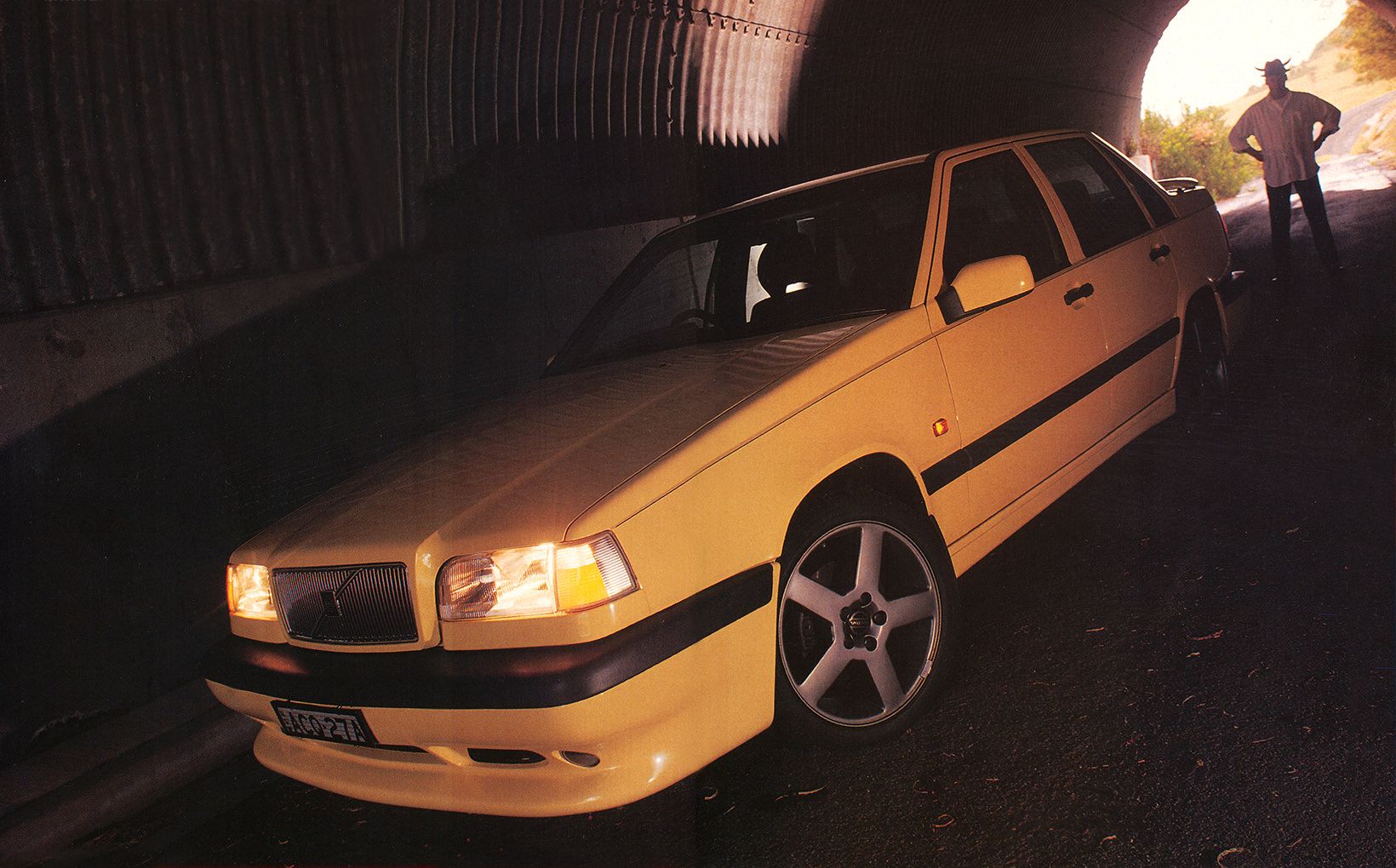 The other day I went to the zoo. I saw one creature with an angry, heavy-set brow, sharp claws and needle-like teeth, hissing and spitting and threatening to attack. The animal was a marmoset. It was no larger than my hand. Like, I'm meant to be scared?

I had driven to the zoo in a sports sedan of an equally fearsome countenance. It had looky-me, banana-milkshake paint-work, spoilers and wings and spidery 17-inch wheels with elastic band tyres stretched taut around them. The car was called a Volvo. Yeah, right!

"No ordinary Volvo" may sound like an oxymoron, but it does apply to the 850 T-5R which is based on Volvo's turbocharged five cylinder, front- drive, more'n half all right 850 T-5 sedan. The 'R' suffix does indeed seem more likely to stand for 'Racer' than 'Reginald' as it sits on the Volvo from Hell.

Volvo Car Australia was inspired by last year's Super Production Car Series like very few others. The 850 T-5R is the power-upped, equipment-stripped evolution model for Volvo's various international touring car campaigns in 1995, which makes it just the ticket for the Aussie Super Proddies. A total of 2500 R spec cars are being built, of which only 300 are right-hook versions. 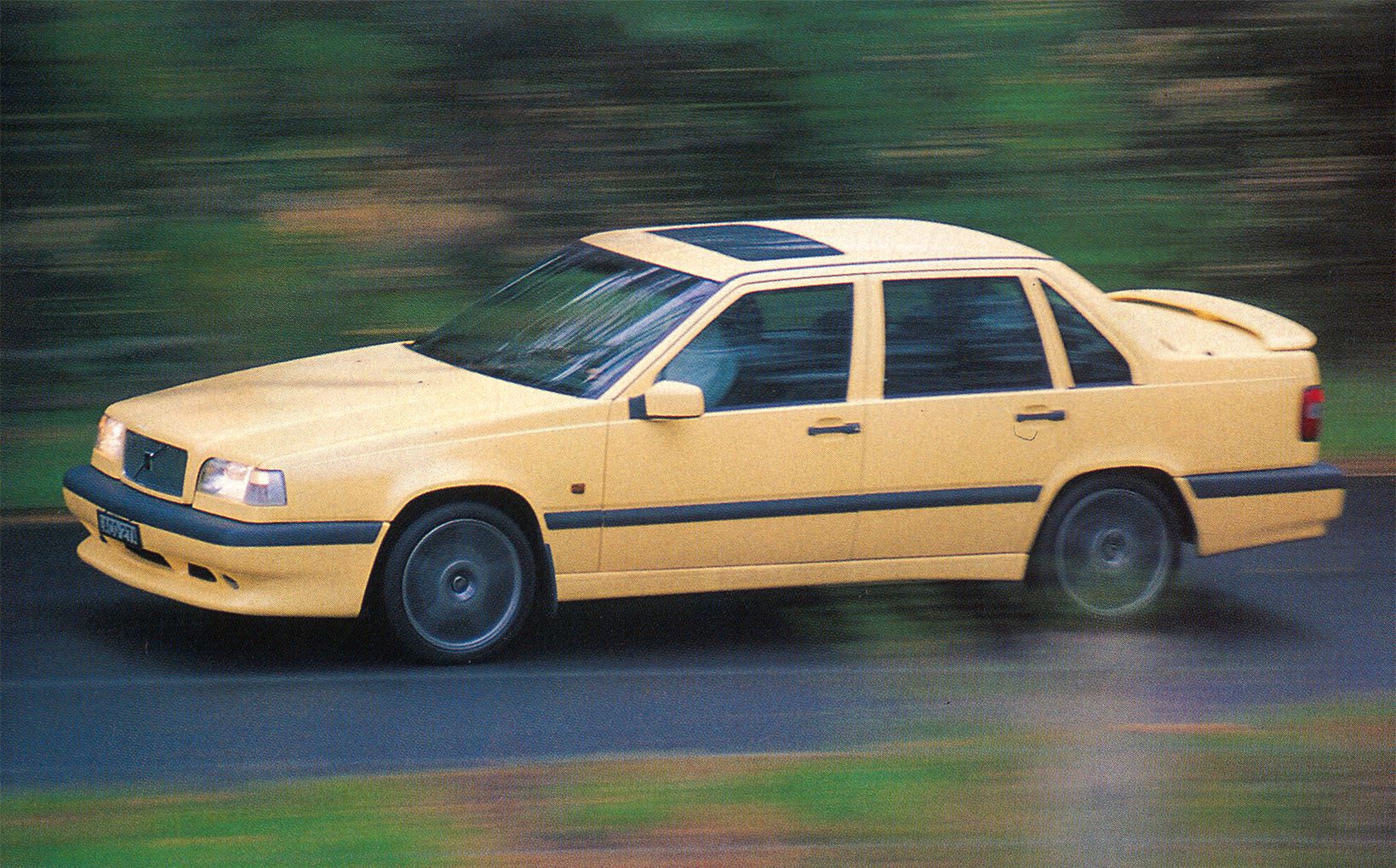 Australia has been allocated just 25 of the custard-coloured cars, made available either race-stripped or fully-equipped. The race version lists at $74,950 and carries a recommendation against road use; for just $1000 more, meanwhile, the roadgoing Version makes its electrically operated leather seats, premium sound system, climate air-con and sunroof look like unbelievable value.

BMW Australia and Frank Gardner Racing have likewise collaborated on a limited run of just 15 lightweight M3s, although the $180.000 M3R, with its uprated 235 kW engine and lots of race bits, can only be purchased by CAMS competition licence holders. And on the comfort front, what you don't get in an M3R roughly matches all that you don't get in a 318i. 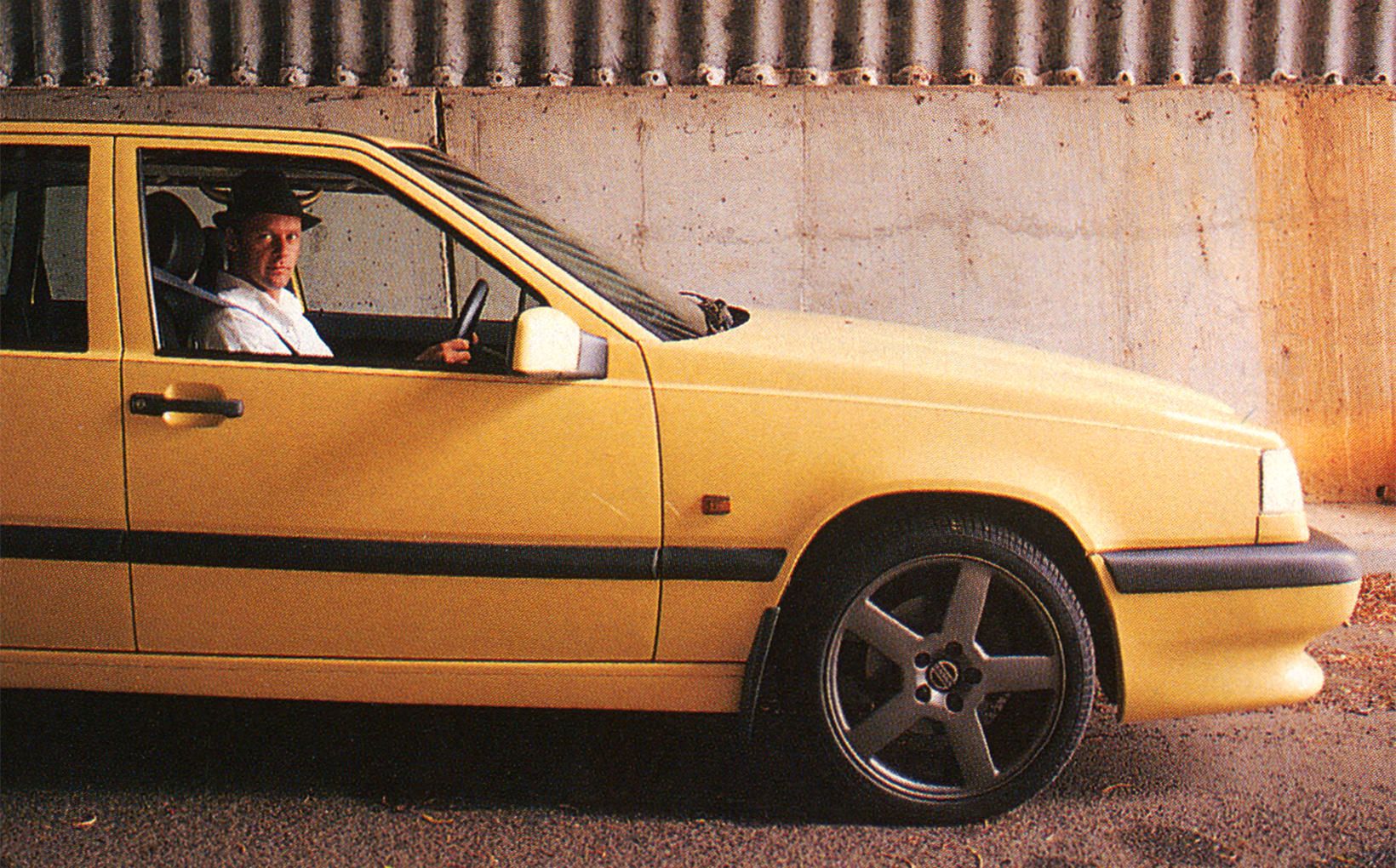 Interestingly (or probably not, unless you're Swedish), those latter figures mean that the 850 T-5R edges out the 167 kW Saab 9000 Aero for the honour of being the most powerful front-wheel drive car currently sold in Australia. This could turn out to be a huge worry, but doesn't.

The R-car's peak power, meantime, arrives at 5600 rpm (300 revs higher than the stocker's), but more significantly, the T-5R's torque curve has a much shorter plateau. Volvo's power gains have arrived solely through the engine's brain-box there's no tricky turbo, no big-valve head, not even a different exhaust system.

A different chip in the engine management system is programmed to deliver 330 Nm in a flat line from 3000 to 4800 rpm, accounting for the less tractable nature of this engine against the standard car's 300 Nm available from 2000 to 5250 rpm.

Perhaps it's just as well that a five speed manual is the only tranny available, although its slow and slushy gate and tallish overall gearing sure dampen the experience. 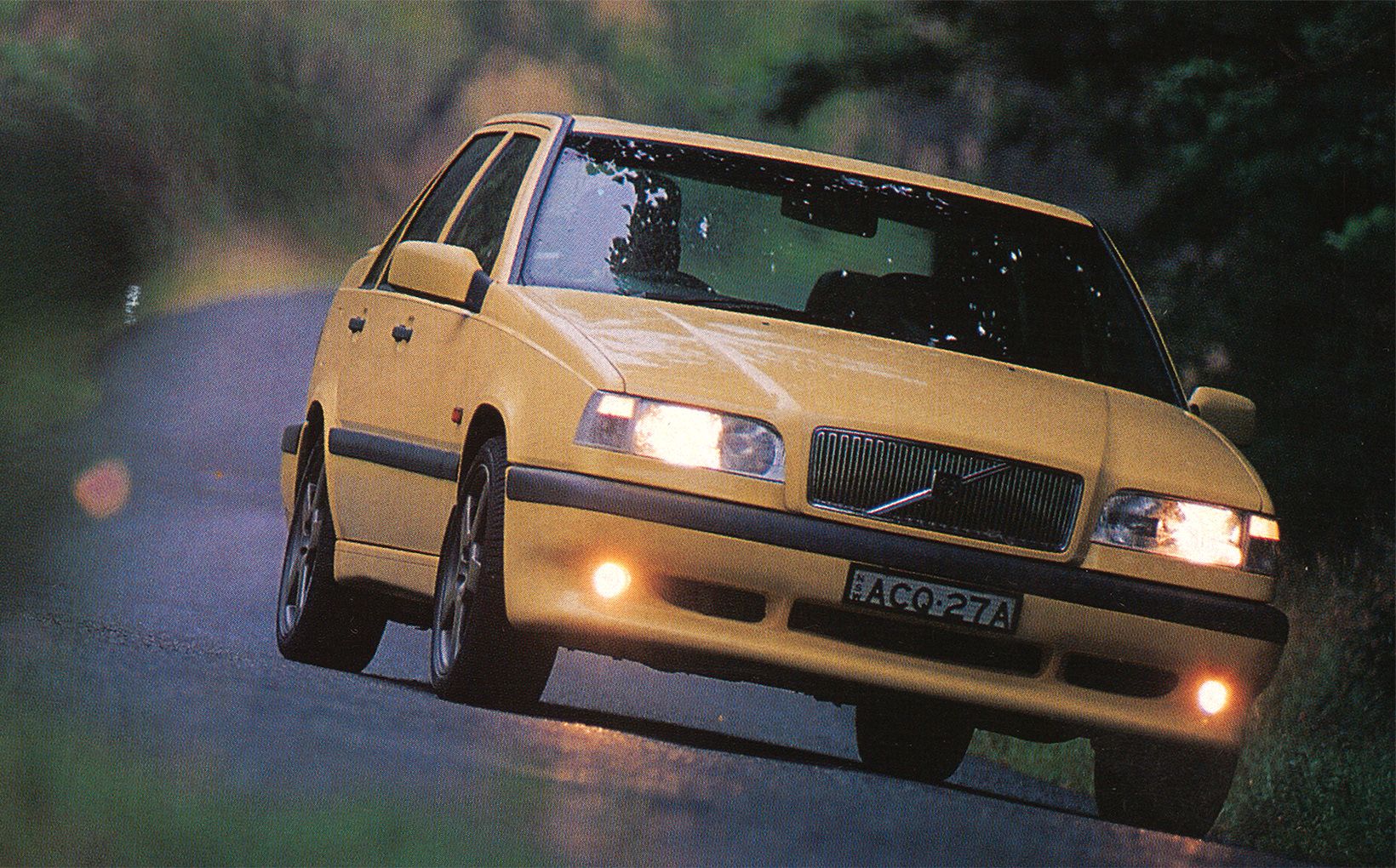 The effect of all this is to propel the comfort kitted 850 T-5R from rest to 100 km/h in seven seconds neat, or about half a second faster than a regular T-5. That's according to Volvo's figures. Our performance testing was conducted in turbo- nobbling weather conditions - stinking hot and dry - and we posted only a 7.7 second 0-100 kay sprint. Over the standing 400 metres, the R-car was again a few tenths slower (at 15.7 seconds) than the last T-5 we tested.

Not unlike a V8, the Swedish turbo motor is a thirsty bugger, returning a trip computer average of 12 litres per 100 km on a highway cruise. Press on and you'll pay.

Most unlike a V8, the Volvo's transverse five-potter feels doughy and unresponsive until it begins to hit its stride around 2500 rpm. Even when the fireworks (and rorty induction note) begin thereafter, the throttle response remains laggy and requires slipping and blipping during upshifts so as not to fall off boost. Exacerbating the whole thing is an initially dead, long-travel Benz-style throttle pedal, a gearshift action straight out of an Alfasud, and fairly spaced ratios.

Out on the road, the T-5R masks its potential traction problems with a combination of electronic traction control and heavily power-assisted steering. The former seems to forget itself sometimes, which is great fun, while the latter is very firmly weighted and most responsive immediately off-centre. Steering response is fairly progressive throughout the wheel's travel but, apart from some mild kickback, it always feels remote and artificial. 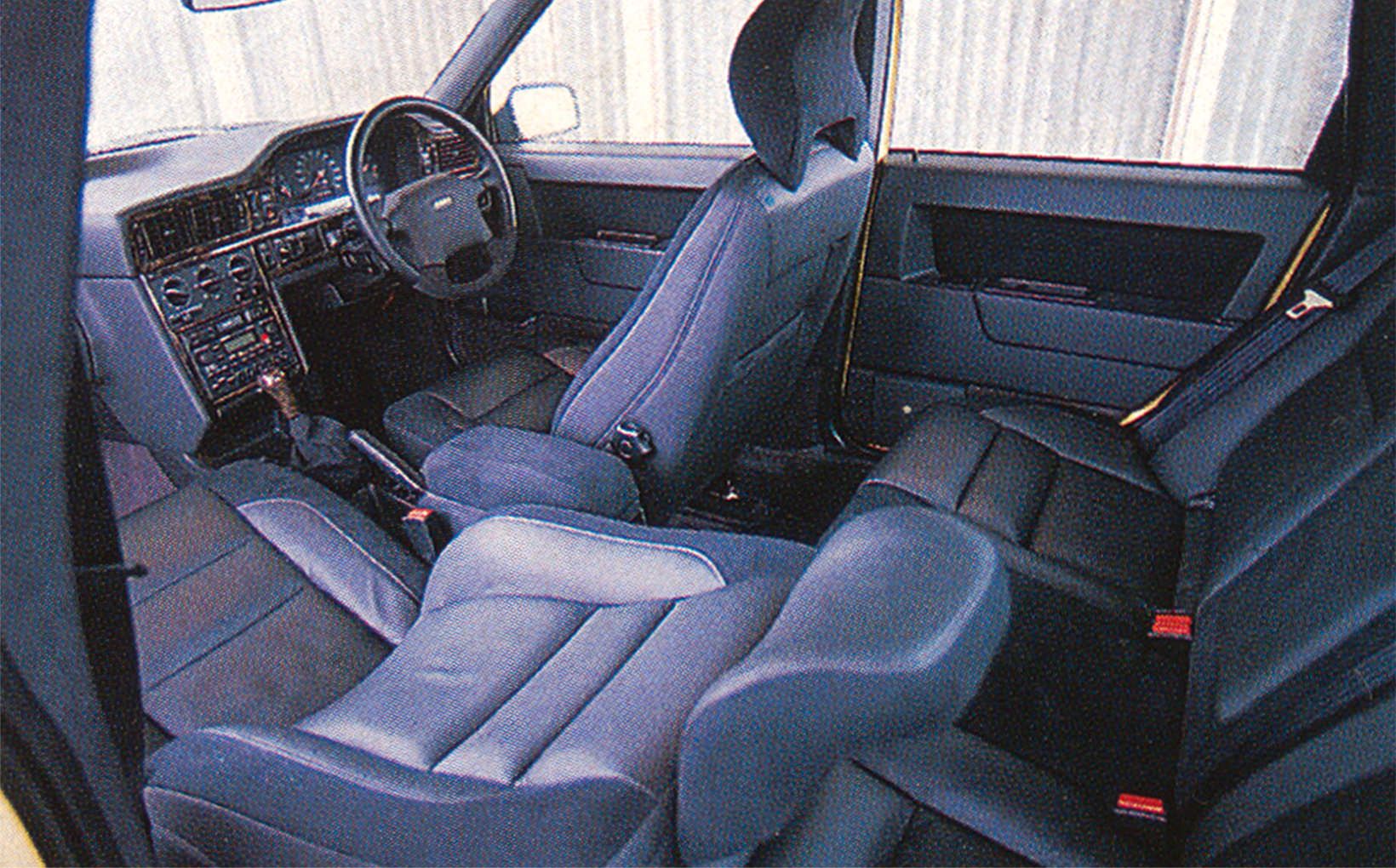 This is perhaps quite a feat, given the liquorice strap profile of the brilliant Pirelli P-Zero 205/45ZR17 tyres. As with the engine, however, the steering falls short in providing driver communication and involvement

Maybe that's just our fault for expecting a Swedish BMW M3. The T-5R is a textbook performance front-wheel drive handler: Neutral with eventual, usable understeer on fast exits and a tail that's unfussed by desperate late braking and flick corner entries. Body roll is notably well controlled; so too is the body's squat and dive under acceleration and braking.

But for the swift Swede's suspension control, and the fact that it actually steers without pulling one's arms out, one might have made an unflattering comparison with the Audi S4. Like the Audi, however, the T-5R seems to have a lot of air or rolling resistance; lift off the throttle at cruising speeds and you can feel it decelerate, like you're driving it along a beach. 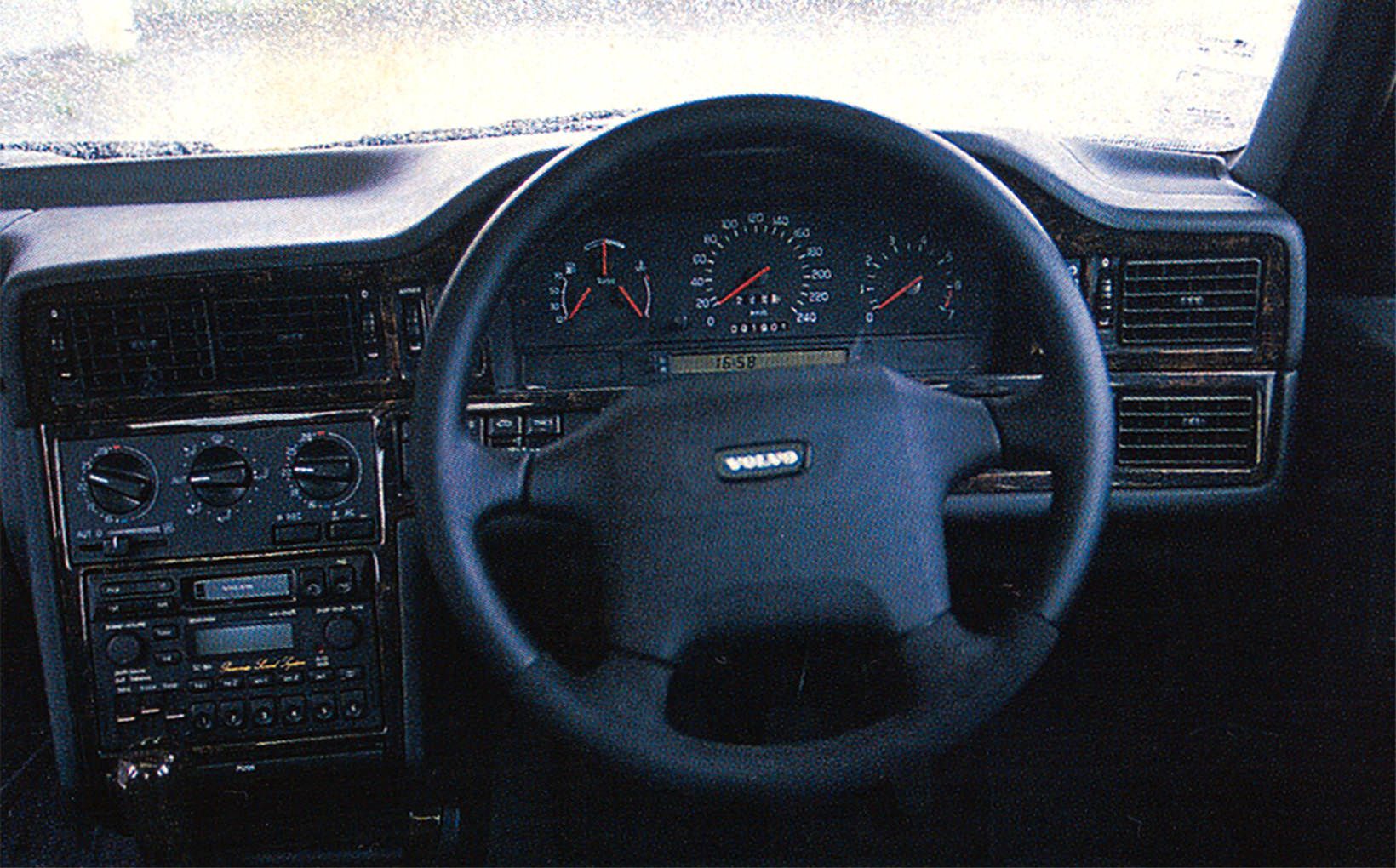 Heck, but the Volvo from Hell rides really well. Remarkably so, in fact, given its firm and confident handling and those low-profile Pirellis. It doesn't rumble at all noisily or uncomfortably over patchy sur- faces, nor does the steering tramline. If anything, its bump damping might be just a tad too firm and its rebound just a tad too soft. which allows a mild hopping motion over undulations. Generally, however, it's a remarkable achievement.

The standard 850 T-5 FER model is blessed with more brakes than it could ever need. a fact made evident to this punter during dozens of laps of Phillip Island a year ago. Volvo deemed the ventilated front, solid rear disc set-up (with four piston callipers up front) sufficient for the R-car, and we've no complaints in terms of fade nor feel. The ABS system is marvellously unobtrusive, at least in late- braking desperate on sealed surfaces.

Inside, the road version of the T-5R doesn't look any different from a regular, upmarket 850. The steering column is height and reach adjustable and includes an airbag; there's another bag for the passenger, too. In fact, there are airbags everywhere, because both the driver's seat (with leather and fake-suede trim, and three electric pre-sets) and the passenger's have novel side-impact bags. 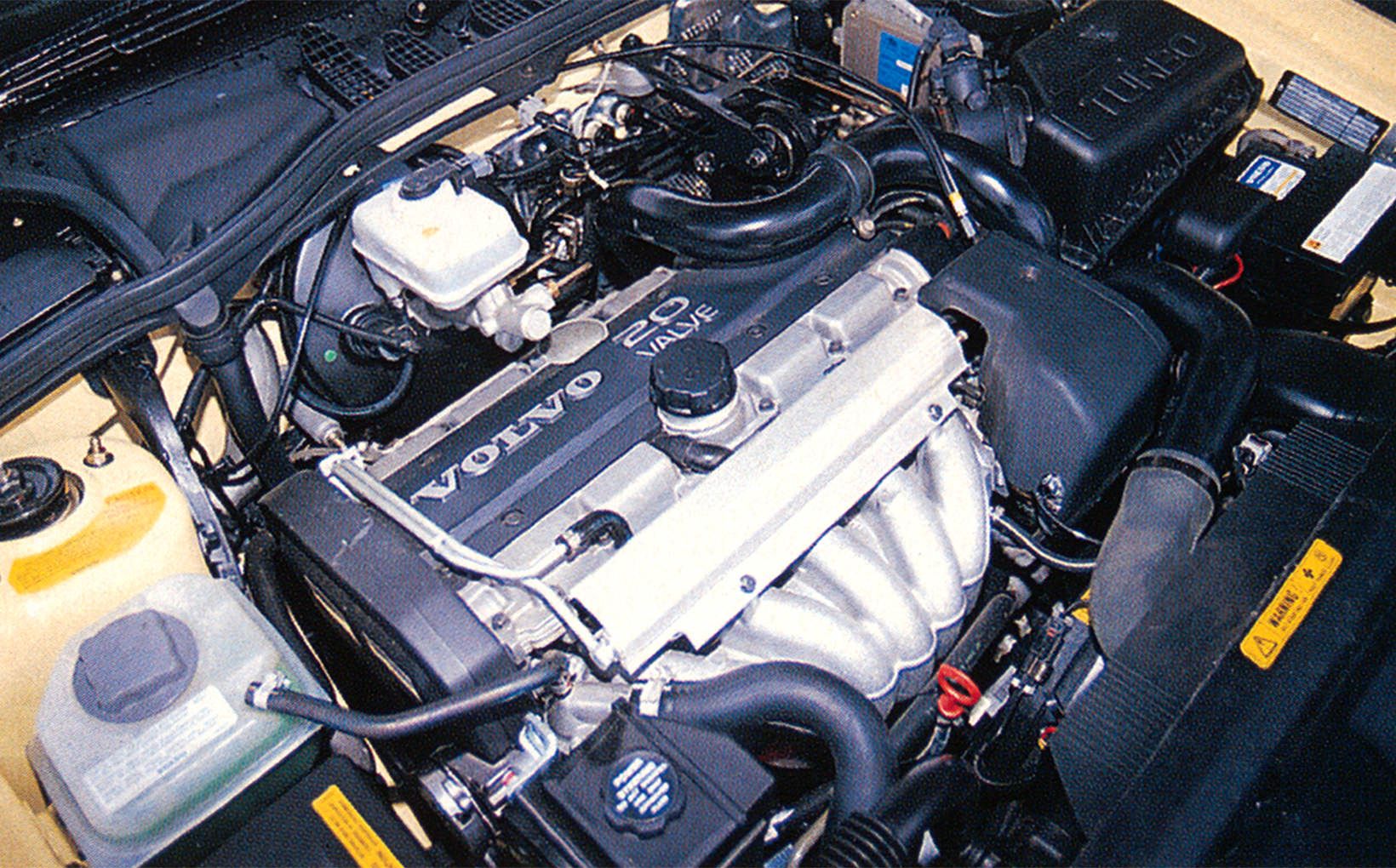 In less trying circumstances, the firmly foamy cushion falls short on side support, although the backrest is well-shaped. Some may find the non-adjustable headrest intrusive against the back of the head, but there's quite reasonable headroom above, despite the glass tilt/slide sunroof that's included in the standard kit. The flat, black Eastern Bloc dash is lightened somewhat by token woodgrain cappings, which at least don't reflect as badly as the instrument panel glass. All good news in the back seat, however, with heaps of room for feet, knees and head, the latter thanks to a scallop in the roof lining aft of the sunroof mechanism. Perhaps it's appropriate that, in a car designed to stir normally dormant loins, Volvo's nifty fold- out armrest/kiddie seat is included.

No doubt, in its own tiny kingdom the marmoset is indeed a fearsome animal. The Volvo 850 T-5R is every bit as fast and capable as it looks, and true to the Volvo kingdom, it's unlikely to bite the hand that feeds it. In the sports sedan kingdom, however, a bit of a bite is a desirable thing.