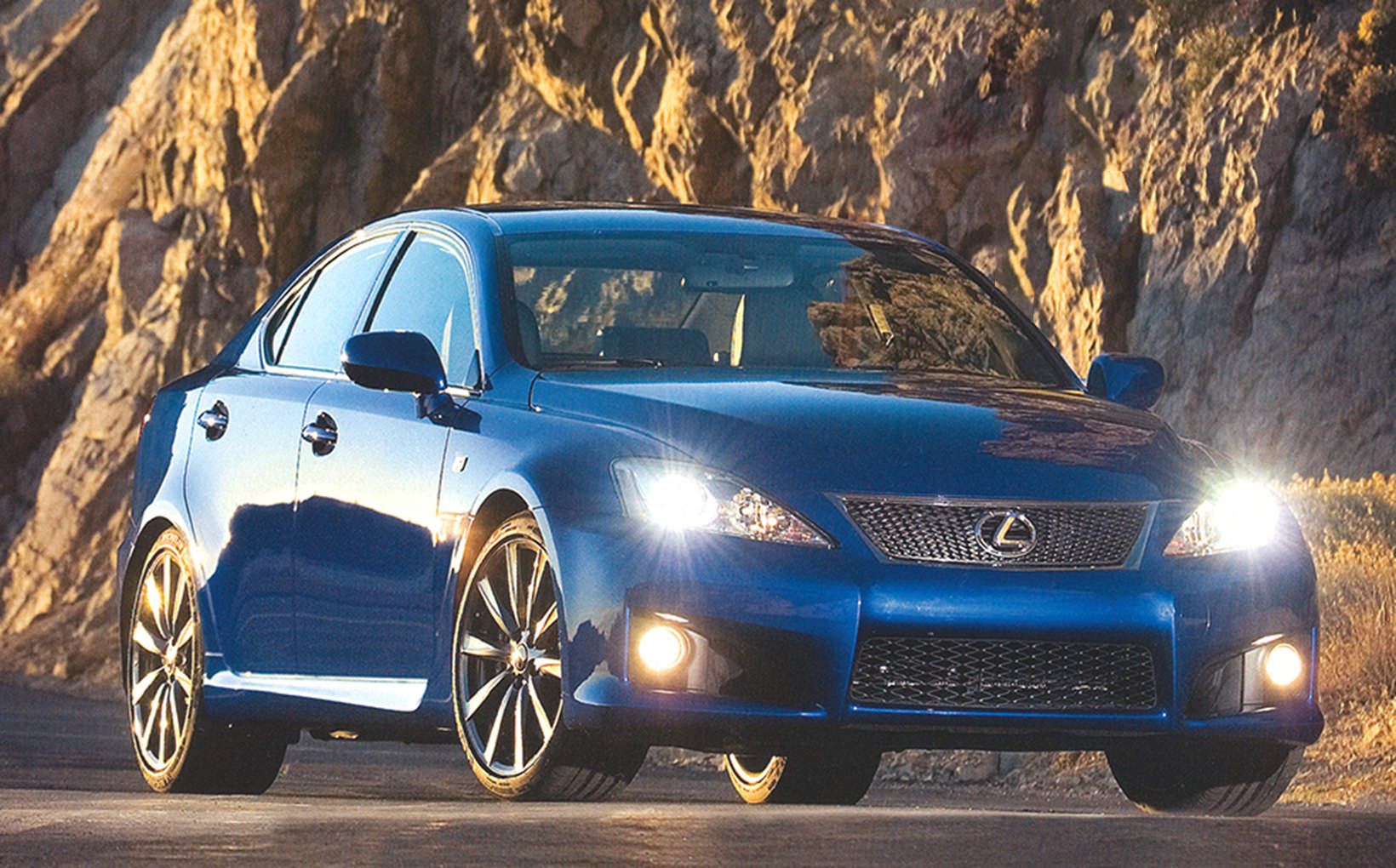 WELL WHY not 'F'? Most of the cool letters are already snatched: M (BMW), Z (Nissan), R (everybody but the Catholic Church). Indeed, Toyota's luxury brand and the letter F have been wedded for years, according to company history.

Toyota's greybeards recall when the Lexus luxury division was just a classified notepad scribble codenamed Circle F'. The first Lexus LS400 of 1989 was known internally as the F1' or Flagship'. And the stylized Fs on the cheeks of the 2008 IS-F are drawn, it's said, to mimic a few hairpin turns of Toyota's Higashi-Fuji test track.

F stands for anything but the obvious, which Lexus definitely isn't. The brand is smoking BMW, Mercedes-Benz, and the rest of its luxury competition in its key North American market. Failure is as rare at Lexus as, well, fun.

There, we said it. Lexus means boring in our dictionary. Quiet? Indeed. Well made? Absolutely. Dull? Well, yes. No wonder 70 percent of US Lexus buyers are retirees, according to the company.

For its first F (there'll be more, rest assured) Lexus presents a V8 sledgehammer capable of generating over 0.90g on the skidpad, that rockets to 100 kays in a claimed 4 3sec - faster than the new M3 - and is still straining the reins at its 277km/h speed limiter.

It also keeps us grinning through hard track laps, even though the frequent fill-ups of premium were inhaled at the rate of 15L/100km by street driving alone. We'll see what younger buyers say in late 2008, when the IS-F goes on sale in Australia at a price not expected to leave much change from $120,000. 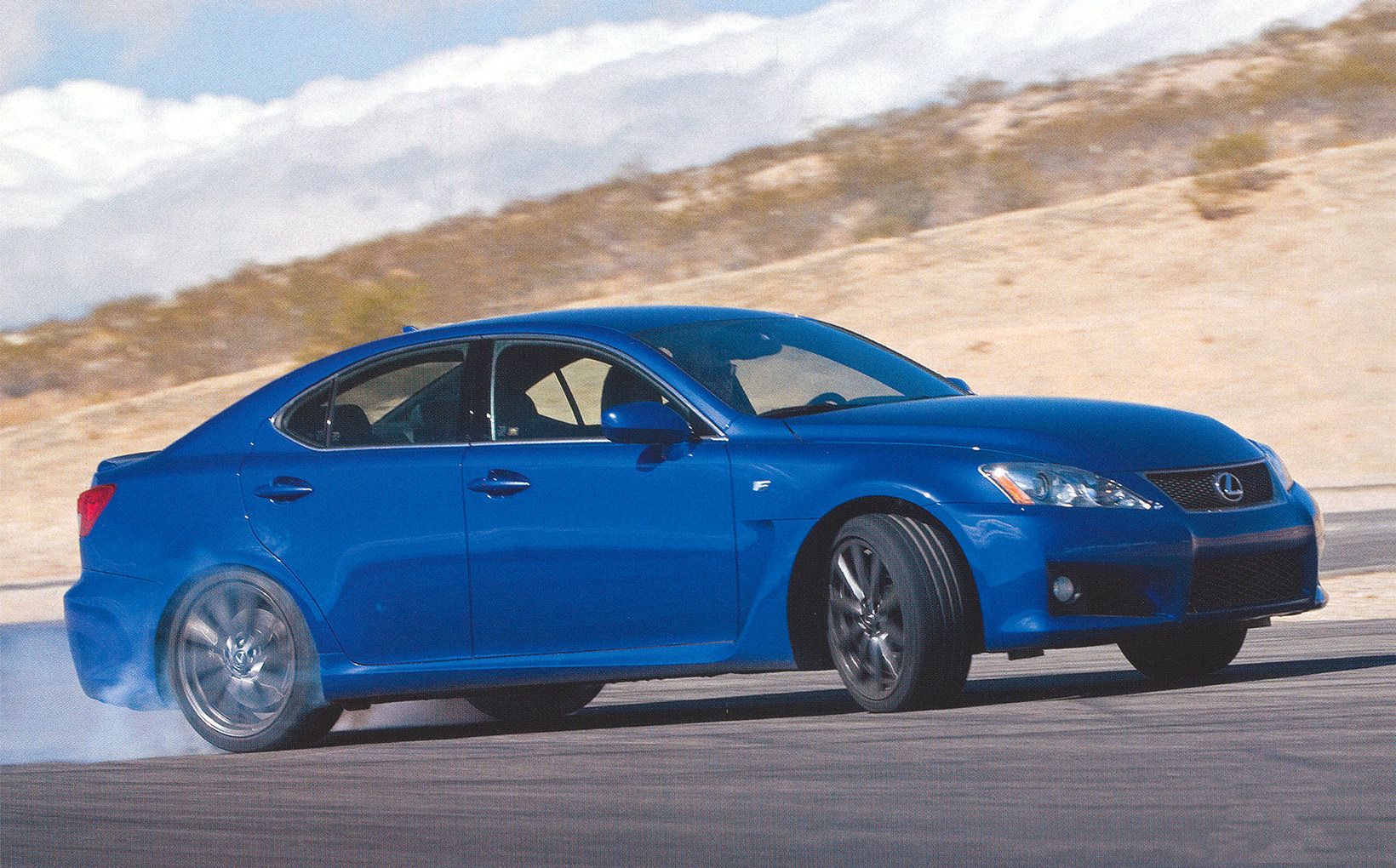 IS-F can pull 0.9g through corners, and, in a first for the brand, electronic stability control can be switched off.

The diminutive IS250/350 platform wasn't designed from the outset to bolt up with the LS600h hybrid's 290k W direct-injection 5.0-litre 2UR-FSE VS, even sans the hybrid gear. Nor was it intended for an eight-speed automatic, or the pumped-up powertrain chief engineer Yukihiko Yaguchi planned to make from these components.

Underneath a swollen aluminium bonnet, behind a nose punched out 75mm to pack in more radiator, upstream from four daringly double-decked tailpipes, and between catfish jowls having the grafted-on look of hasty Hollywood monster make-up, lives the 2UR-GSE, as Toyota calls the IS-F's 310kW variant. It is the product of a major rubdown by Yamaha, Toyota's long-time performance partner.

This engine is peakier, actually losing 23Nm on the operating table as the changes pushed the kilowatt and torque peak higher up the rev count. Solid lifters and titanium intake valves with 10 percent more lift reside in new higher-flow cylinder heads. Each cam box has an electric oil scavenge pump to suck out oil pooling in high-G turns. An oil cooler keeps lube temperatures down.

A modern swipe at the old carb secondary flap is IS-F's air cleaner box. At full throttle above 3400rpm, a barn door in the box snaps open with vacuum pressure released from a small reservoir. The unleashed induction whoop electrifies the V8's otherwise sedate hum into a jungle roar.

Polished paddles put your fingers in charge when you wish it. And they'll be busy, with the swift-revving engine and ratio-stuffed gearbox triggering the limiter with annoying frequency. With all that engine fettling, the warning beep reminding you to upshift at 6400rpm and the cut-out at 6800rpm feel like a nun's hand slap. 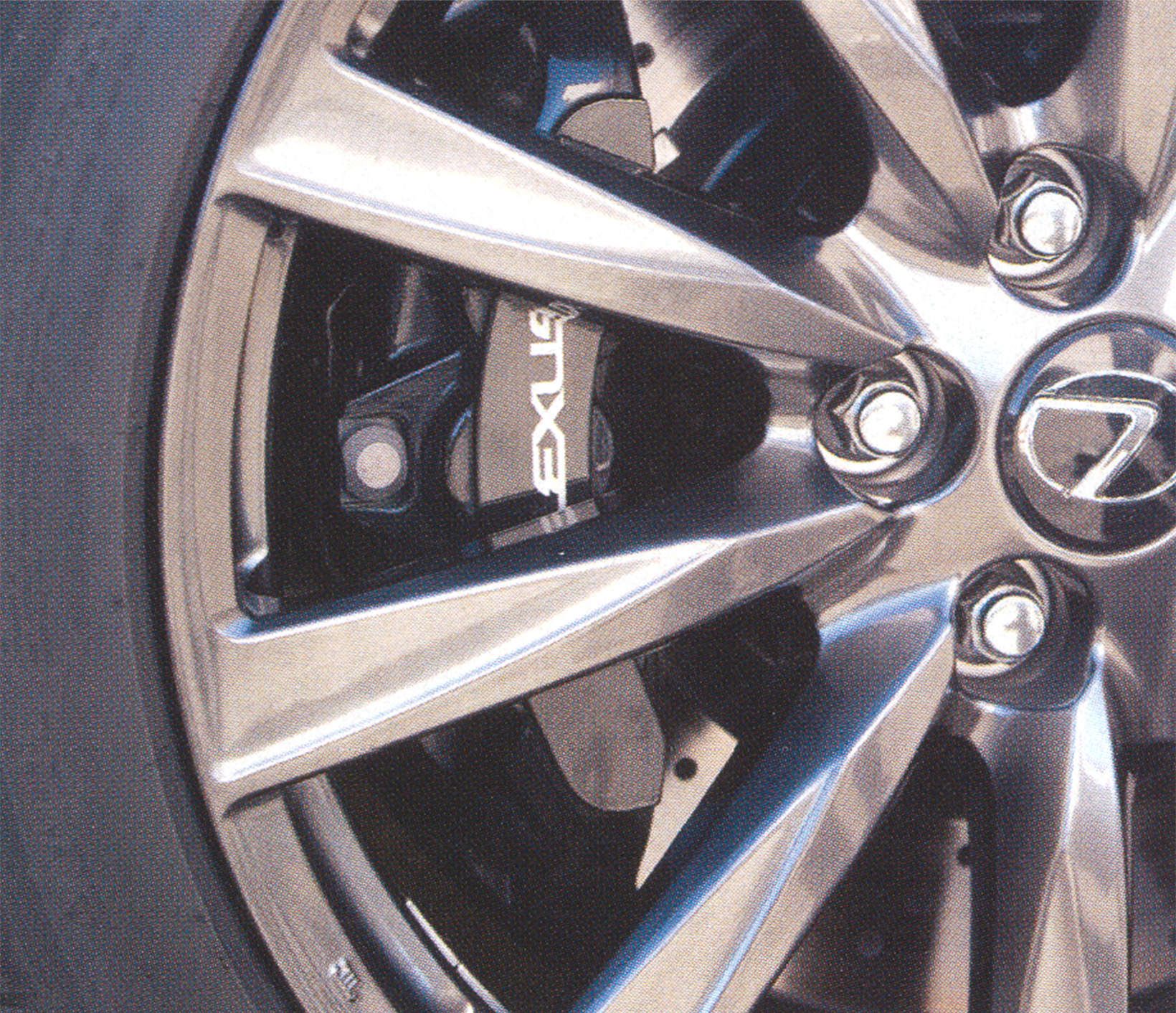 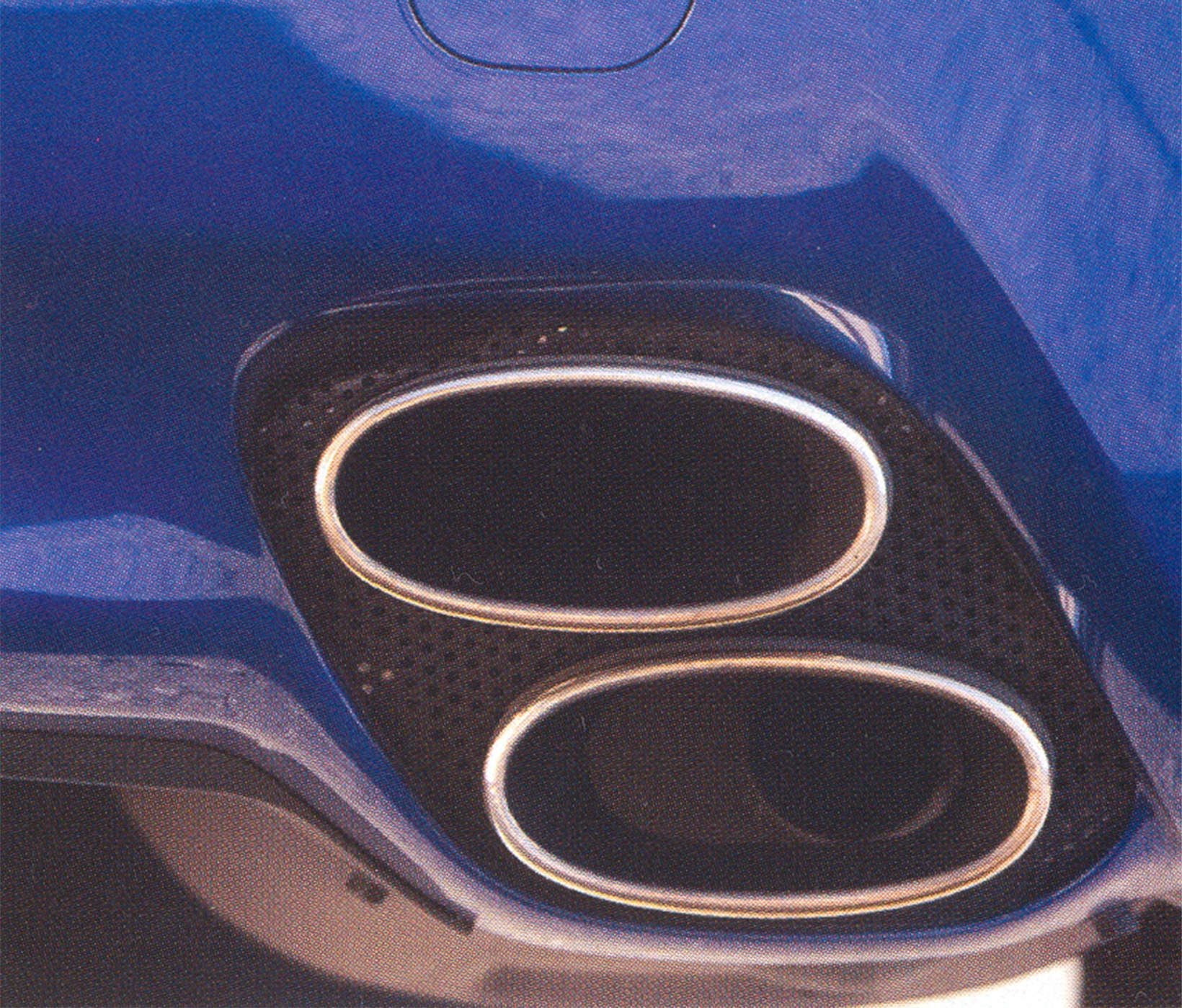 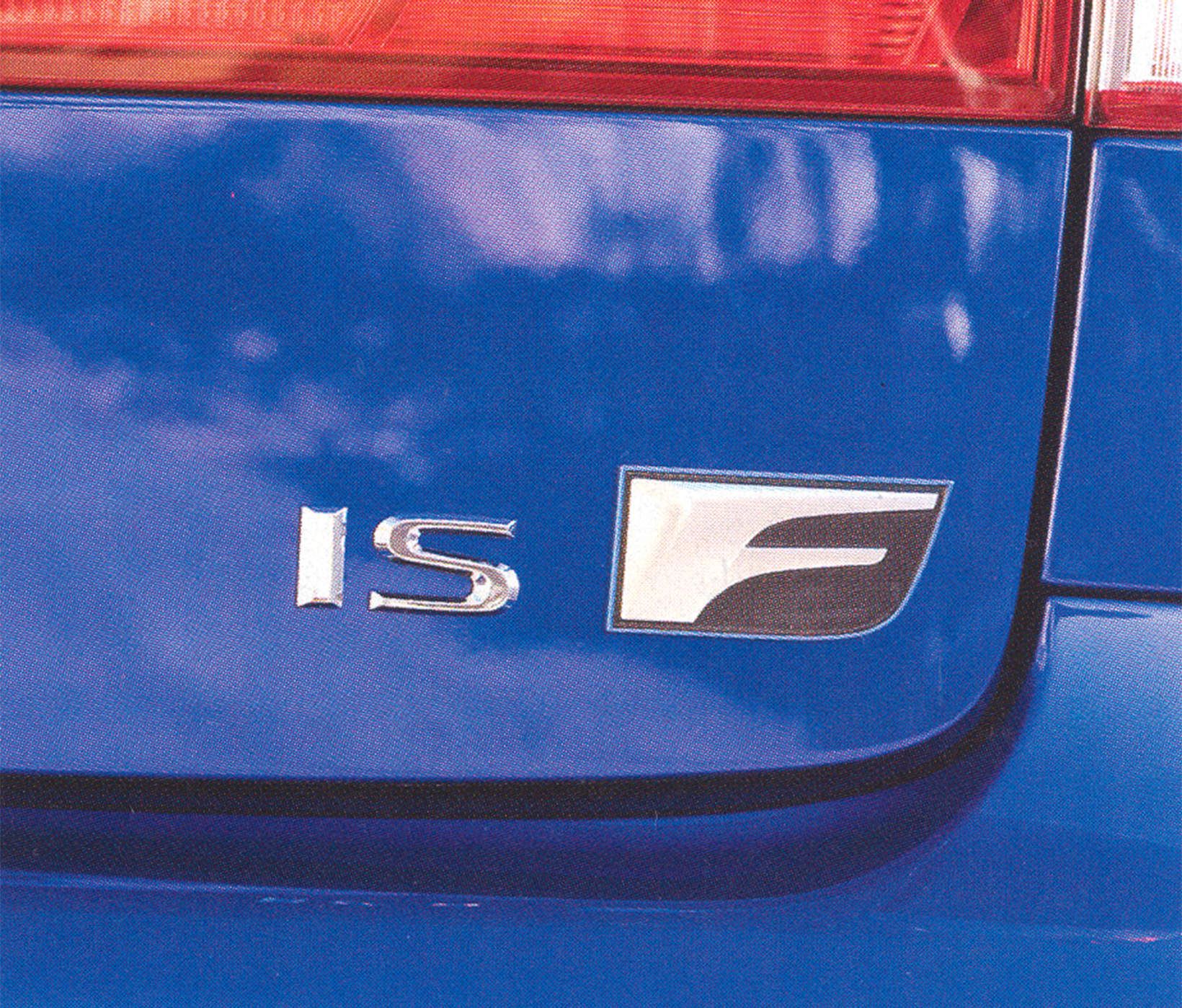 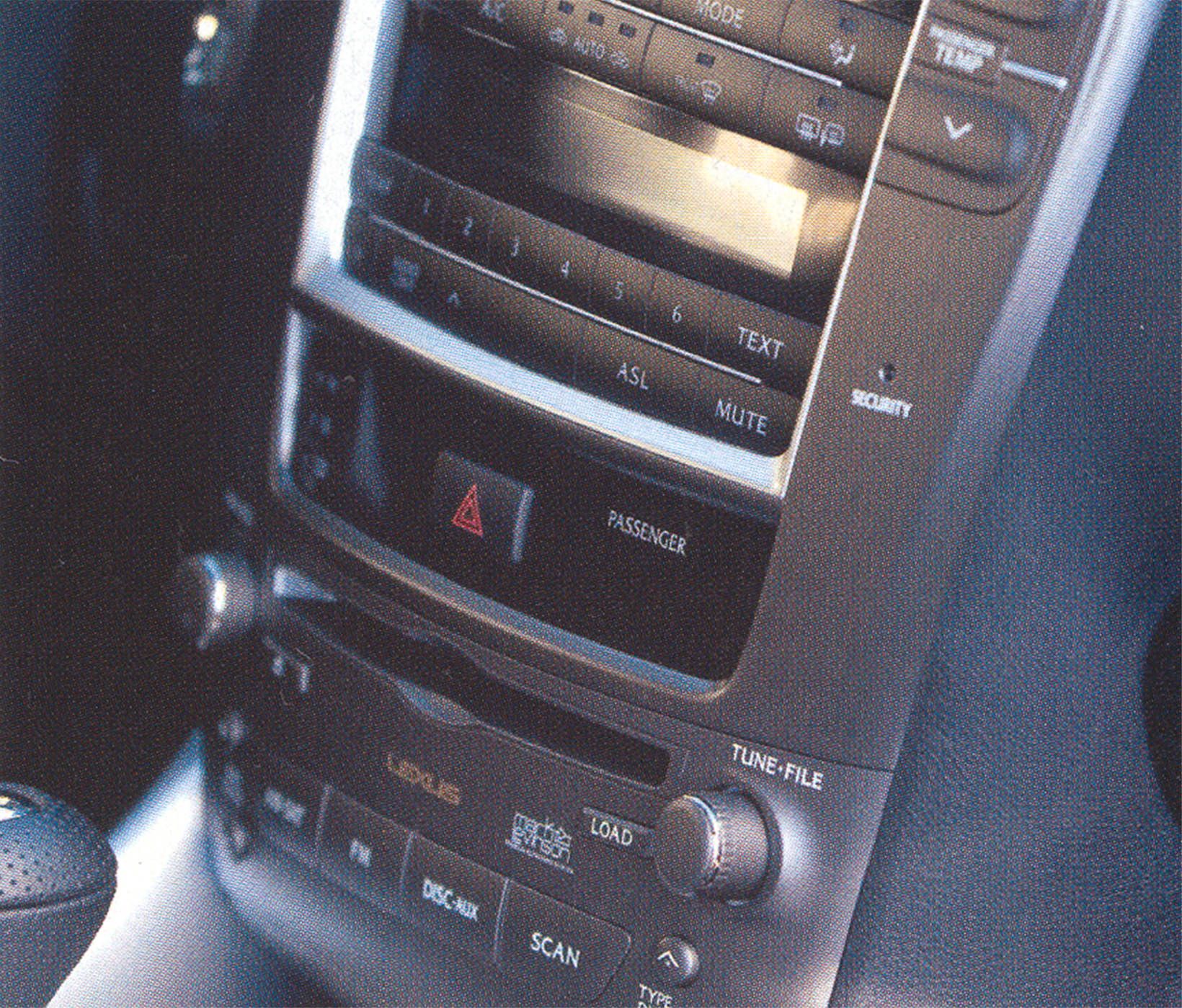 Conservative redlines stretch an engine's lifespan. Yaguchi would have preferred a higher redline, according to one Toyota exec, but lost the battle to a corporate culture that prizes 300,000km durability. Perhaps such post- warranty concerns don't haunt BMW, which set the ceiling on the M3's 4.0-litre V8 at a lofty 8400rpm.

The roll call of muscled-up V8 sedans is getting longer, and comparisons to the M3, C63 AMG, and Audi RS4 are inevitable. Has Lexus once again snookered the Germans on quality and price as it did in 1989?

The direct head-butts will come soon enough. Meanwhile, we'll say this: the IS-F is a somewhat reserved and immaculately built Lexus, however it isn't an M3. But it isn't boring either.

Despite the bling of braided-aluminium trim on the doors and shifter console, temperance rules indoors. Blue-lit gauges and blue seat stitching, alloy pedals, a digital gear indicator, and the subtle F logo on the wheel are the differentiations that drivers see. They'll also feel the grasp of snug buckets with brawny bolsters - contrasting white seat leather is the Cotton Club option in an otherwise dark cabin - and the base car's rear bench is divided into two non-folding buckets with a ski port.

At cruising speeds the cabin is hushed, Lexus-like, with just a distant snort from the engine and the extra thrum of the fat Michelins disturbing the peace. Given the low profile of the rubber mounted to the 19-inch forged aluminium rims, the ride is tightly controlled but commendably mellow.

Yaguchi's team resisted the temptation to petrify the suspension, the resulting ride-handling balance perhaps their biggest achievement. It makes allowances for road fissures and drops the body into holes with cushioned lurches, not crashes. 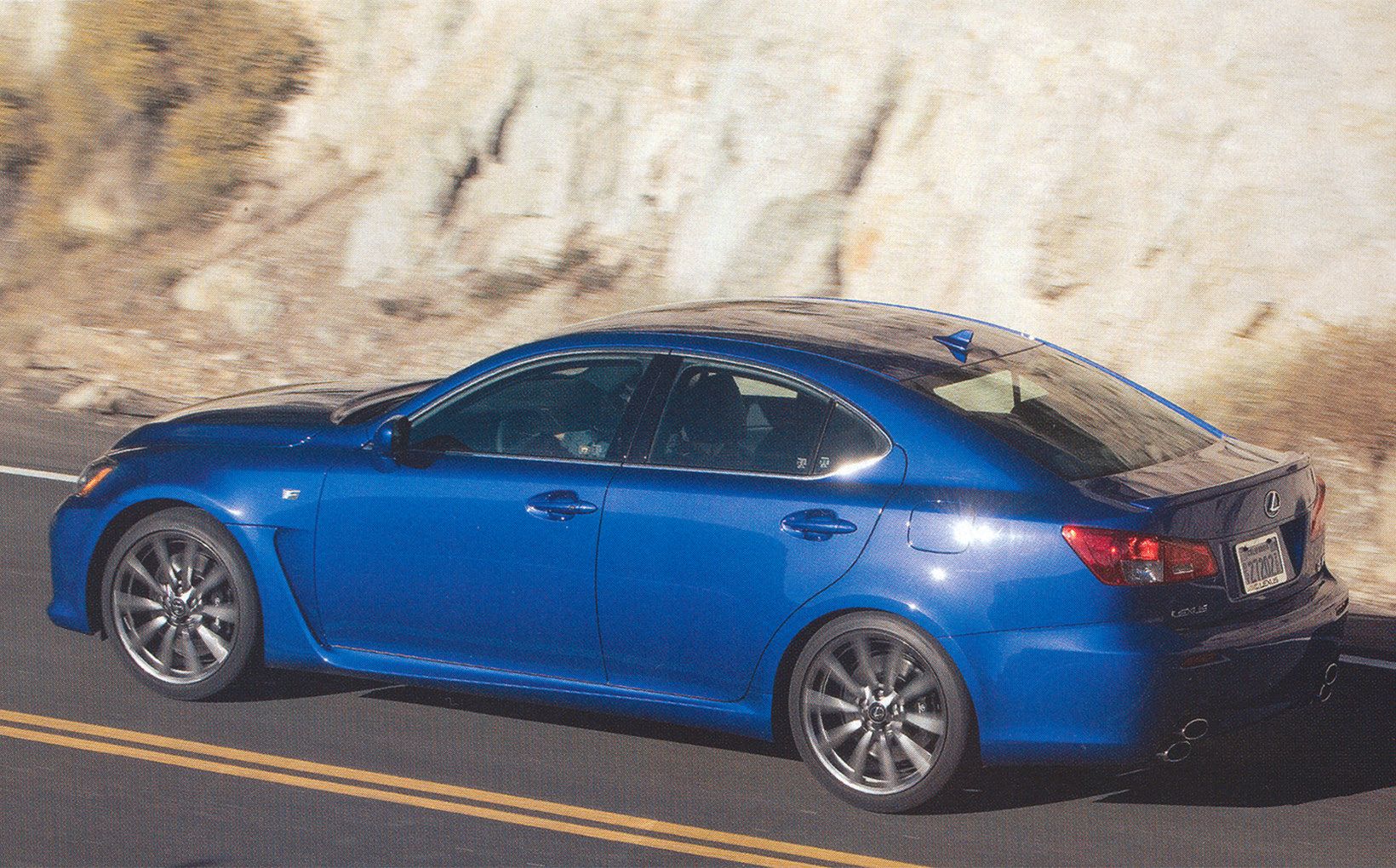 Lexus has the tuned Germans firmly in its sights but will its bid to lure local luxo fast-car fraternity succeed? We won't know until late 2008

It also permits the 1720kg car some restrained roll through twisty roads but not enough to wither your confidence. We generally eschew electric steering assist and its numbing effect, and expect the IS-F will lose points to the sharp scalpels in the M3 and C63.

The IS-F's steering tune aims for middling effort, and the sport mode supposedly dials down the assist though we couldn't feel much difference. Still, the IS-F's rack accurately puts tyres where they're needed and tells the driver, albeit faintly, how things are holding. And hold they do, with a bite that encourages ever higher corner entry speeds.

The all-important sport button also perks up throttle response and relaxes the anti-yaw system to allow some controlled tail action. Toyota is still a newbie at phased stability control, and the system's jerky, digital corrections are less transparent than in other cars with driver-tuneable help. Lexus also allows you to shut the anti-disaster droids off (only while at full stop) and watch rubber roasting on an open differential.

Lacking no muscle, the IS-F nonetheless may be overburdened by its charge to wind back Lexus' demographic clock. The muted interior, the slightly watery controls; the IS.F is, at its core, a Lexus worked over with a shot of steroids. Though sportier than any previous offerings from the brand, the IS-F doesn't seem as likely to grab younger enthusiasts as the BMW 1 Series competitor now being openly discussed by Lexus top brass. Perhaps an F version of that car will deliver the brand to its fountain of youth.

Popular lore at Toyota - plus an official company press release - says the IS-F owes its existence to its chief engineer, Yukihiko Yaguchi, a 31-year Toyota salt who ram-rodded the project through by surreptitiously assigning rogue engineers without company approval.

Yaquchi plays down his role, even though the press release specifically uses the terms "ramrod' and rogue. The grey-haired, goateed engineer deferentially assigns credit for the IS-F to Toyota's founding family scion Akio Toyoda, who has championed a turnaround of Toyota's frumpy image.

With all the engineering work invested in tuning the high-output 2UR-GSE 5.0-litre V8 and making it sing in harmony with the eight- speed automatic, you can bet there'll be more Fs to come. The most likely candidate for the - F treatment is the larger GS460 sedan. Toyota execs have also spoken openly of a BMW 1 Series competitor for the Lexus brand.