Crafted by former Jaguar and Aston Martin designer Ian Callum, the Hunter is as at home on Bahraini sand dunes as it is on rough mountain tracks. Its front-mid mounted 3.5-litre twin-turbocharged dry-sumped Ford V6 offers a mega 700Nm of torque through a six-speed paddle shift sequential gearbox, all-wheel drive and massive 38-inch tyres.

With 400mm of suspension travel, the Hunter can soak up even the harshest terrain; its strengthened steel tubular chassis and carbon-fibre body is underpinned by double-wishbone suspension front and rear, with twin adjustable dampers at each corner. 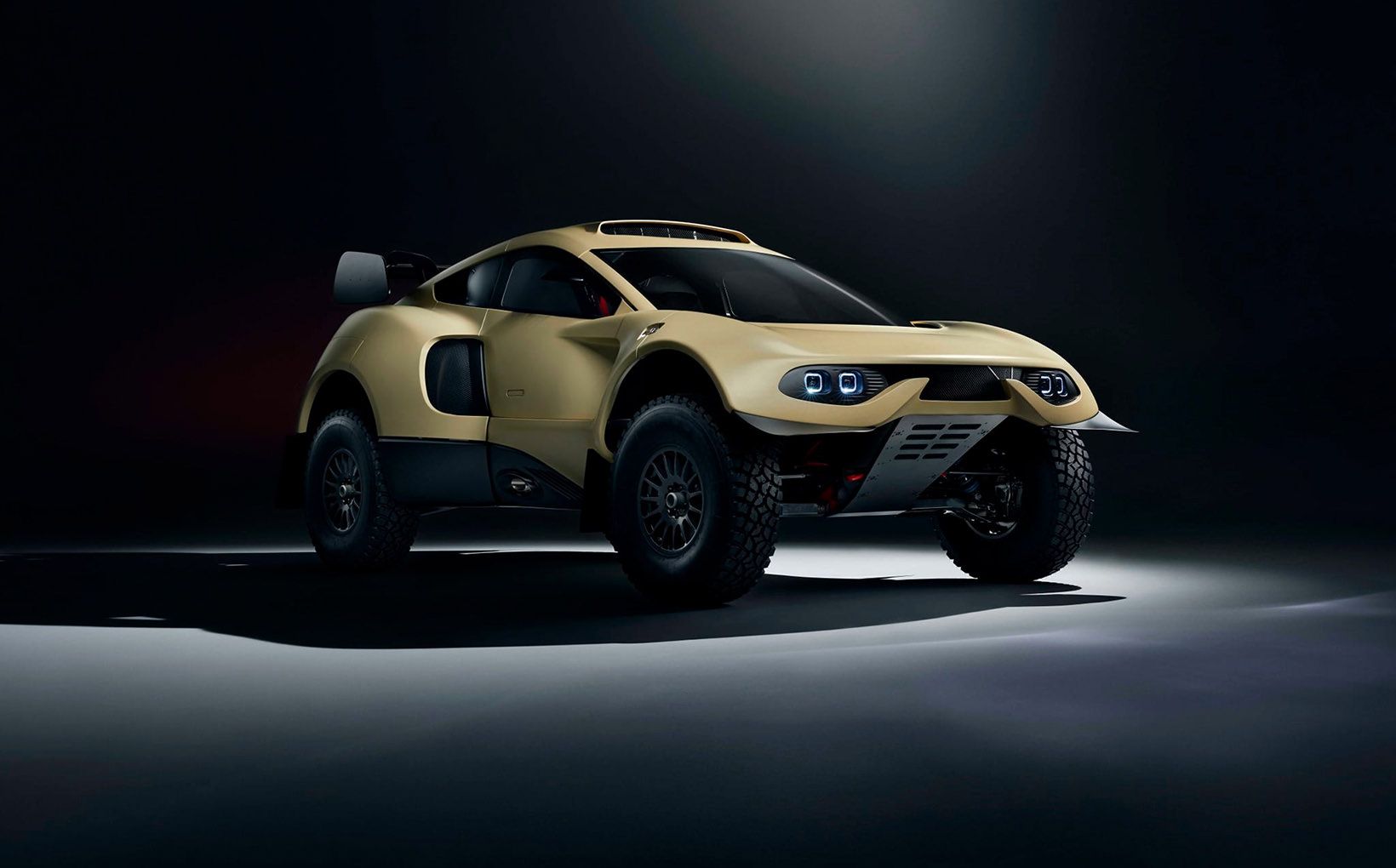 Prodrive says the Hunter is faster, and even more capable, than Loeb’s race car, but also more refined. Its redesigned interior is, wait for it, “more in keeping with everyday use”… the model’s digital instrument panels and centre console are said to offer all of the “traditional controls found on a road-going car”.

Now, I don’t know about you, but we can’t exactly imagine picking up the groceries or dropping the kids to school in a Mad Max-esque race car with a top speed of “nearly 300km/h”, but (as they say) to each their own…

It may also be a little tricky getting the sprog’s booster seat to lash into the FIA approved safety cage or supporting their neck when dashing from standstill to 100km/h in under four seconds. Still, the braking system’s six-pot calipers are “impressively strong”, which means you’re unlikely to have difficulty in stopping for the crossing guard. 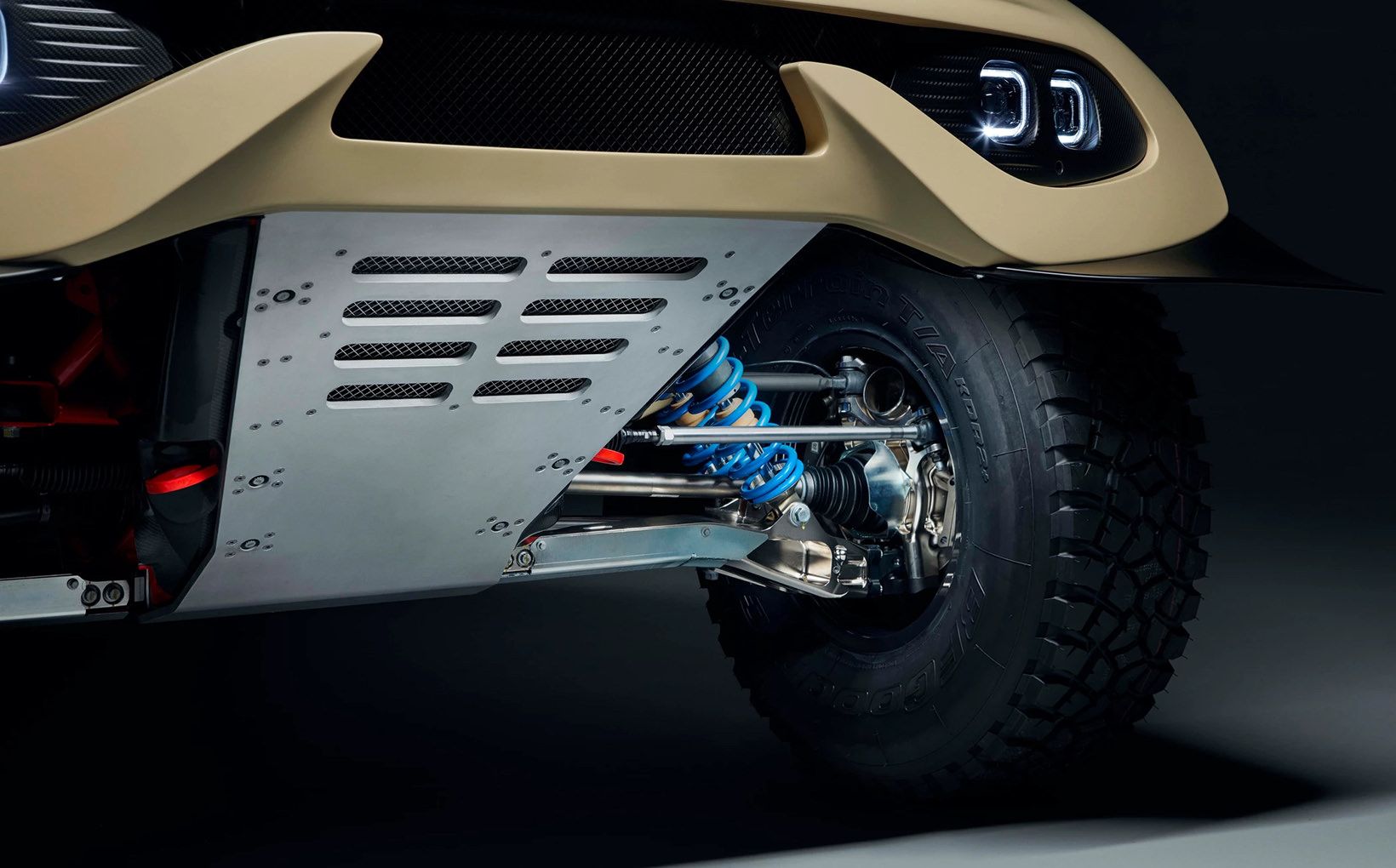 Prodrive chairman David Richards says the Hunter is a unique offering that will provide potential customers with a way to stand out from the crowd, wherever they may be driving – or parked.

“There are numerous hypercars on the market. However, they all need good roads or even racetracks to show their performance,” he said.

“We identified that in certain parts of the world, particularly in the Middle East, there are vast expanses still to be explored that go way beyond the access provided by asphalt roads. Therefore, why not create a vehicle that gives the opportunity to explore these regions with performance way beyond that offered by any off-road vehicle before?” 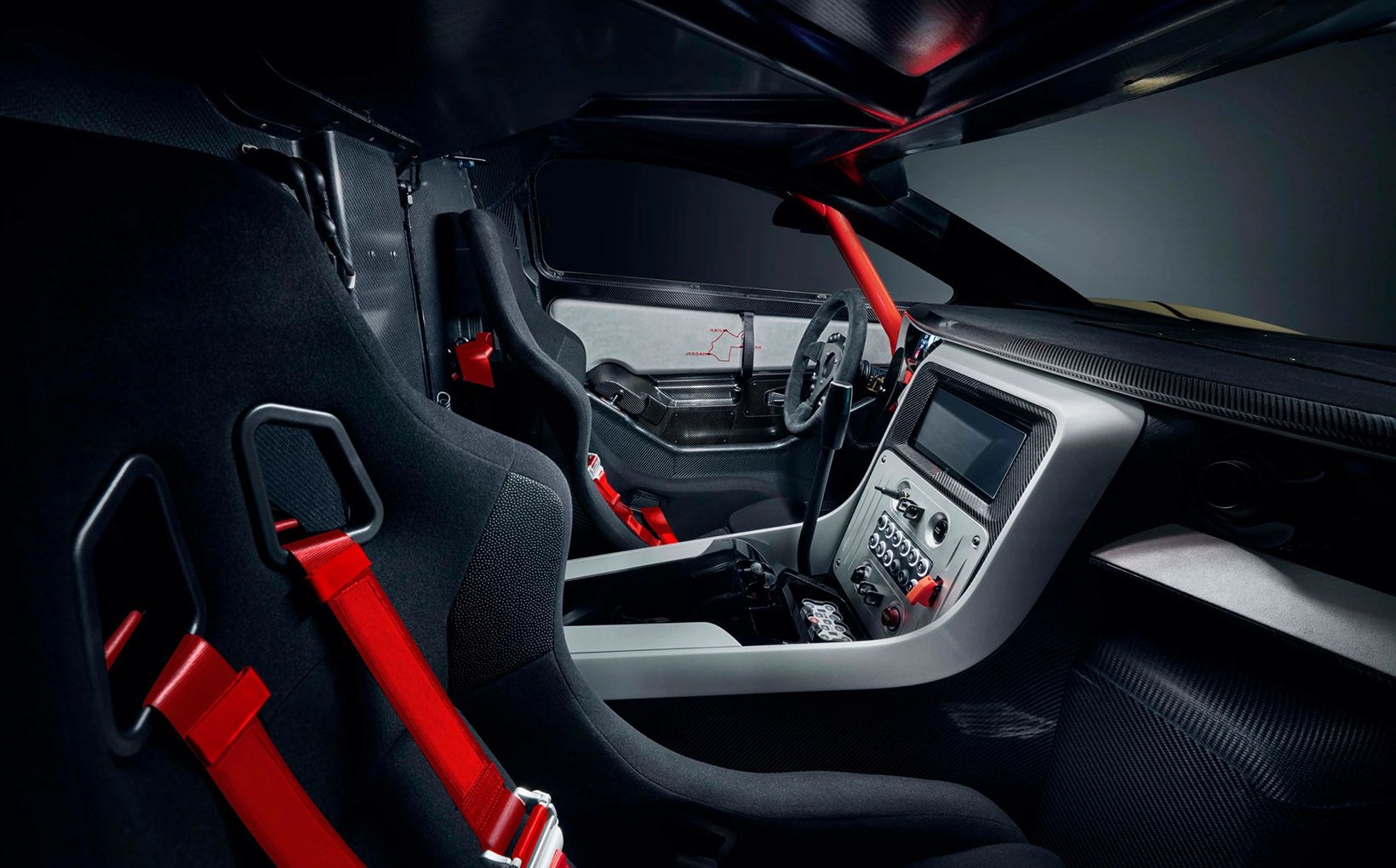 Look, if you already have a garage that includes a Bugatti or two, several Ferraris and a dozen Lamborghinis, then a £1.25m ($A2.23m) off-road toy completes the collection. And when the list of standard features includes a 480-litre safety-cell fuel system, you’re hardly likely to run out of petrol while exploring the Jabal ad Dukhan or the Sakhir desert.

The position of all the Hunter’s vital components have been placed to optimise weight distribution and lower the centre of gravity. The T1+’s body even includes a number of recycled composites… you know, for the Sheik with an environmental conscience. 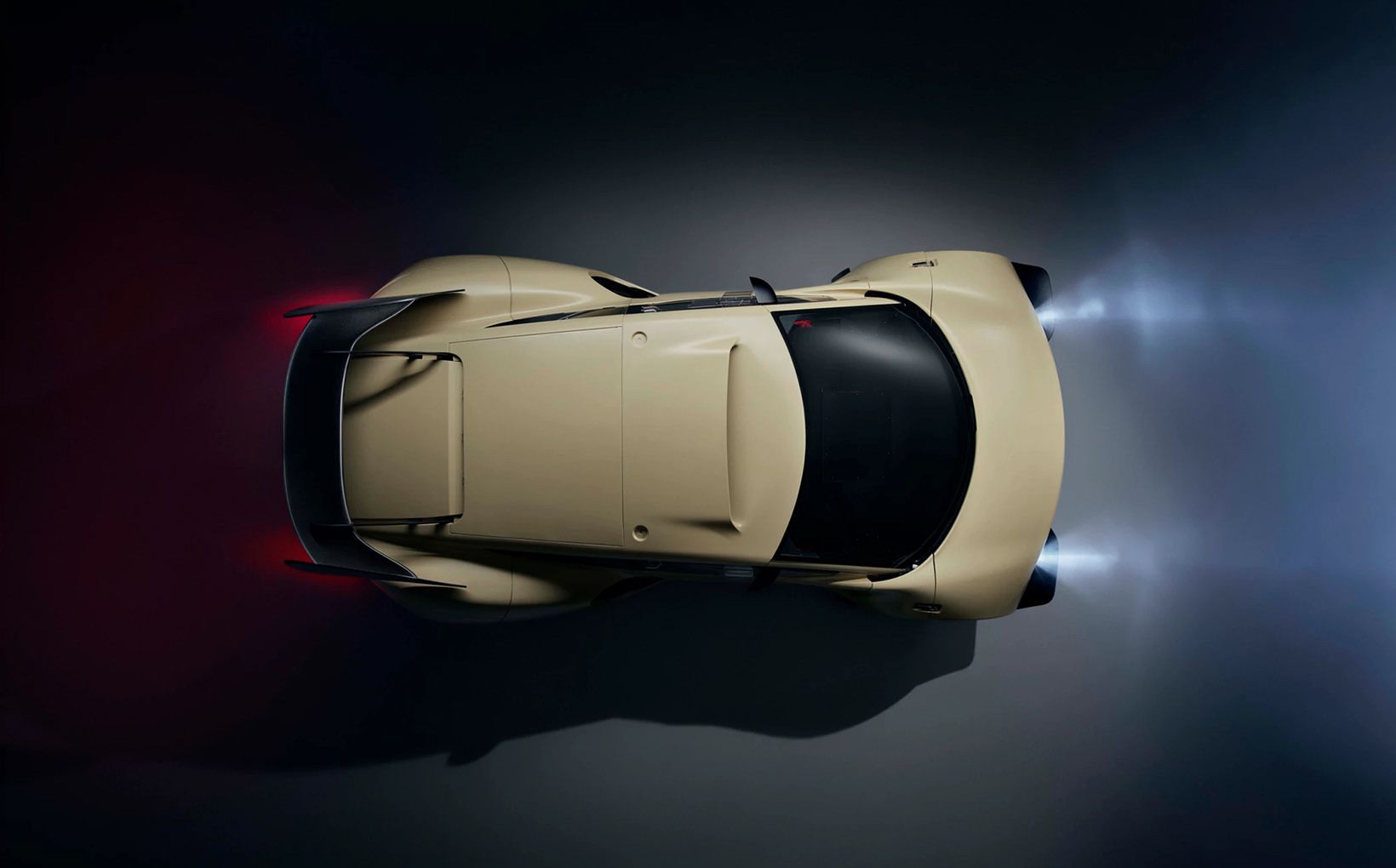 The Hunter even uses recycled carbon-fibre to reduce its carbon footprint.

“We took the deliberate decision to keep the Hunter hypercar as close to the original as possible. It’s about giving owners the opportunity to experience what it is like to drive Loeb’s Dakar car across the desert, but with all the comforts of a road car and the ability to drive it from your home, through a city, to any destination,” added Mr Richards.

“The first development vehicle is currently touring the Middle East where customers are being offered the opportunity to drive the Hunter and confirm their personal specification for production vehicles to be delivered later this year.”

Following the first example, which was built for Bahrain’s Prince Salman bin Hamad Al Khalifa, a further 24 examples of the Hunter will be built. Unsurprisingly, the model’s two-year production run is largely accounted for; this “Ferrari of the desert” has already been ordered by several members of the Middle East’s upper crust. 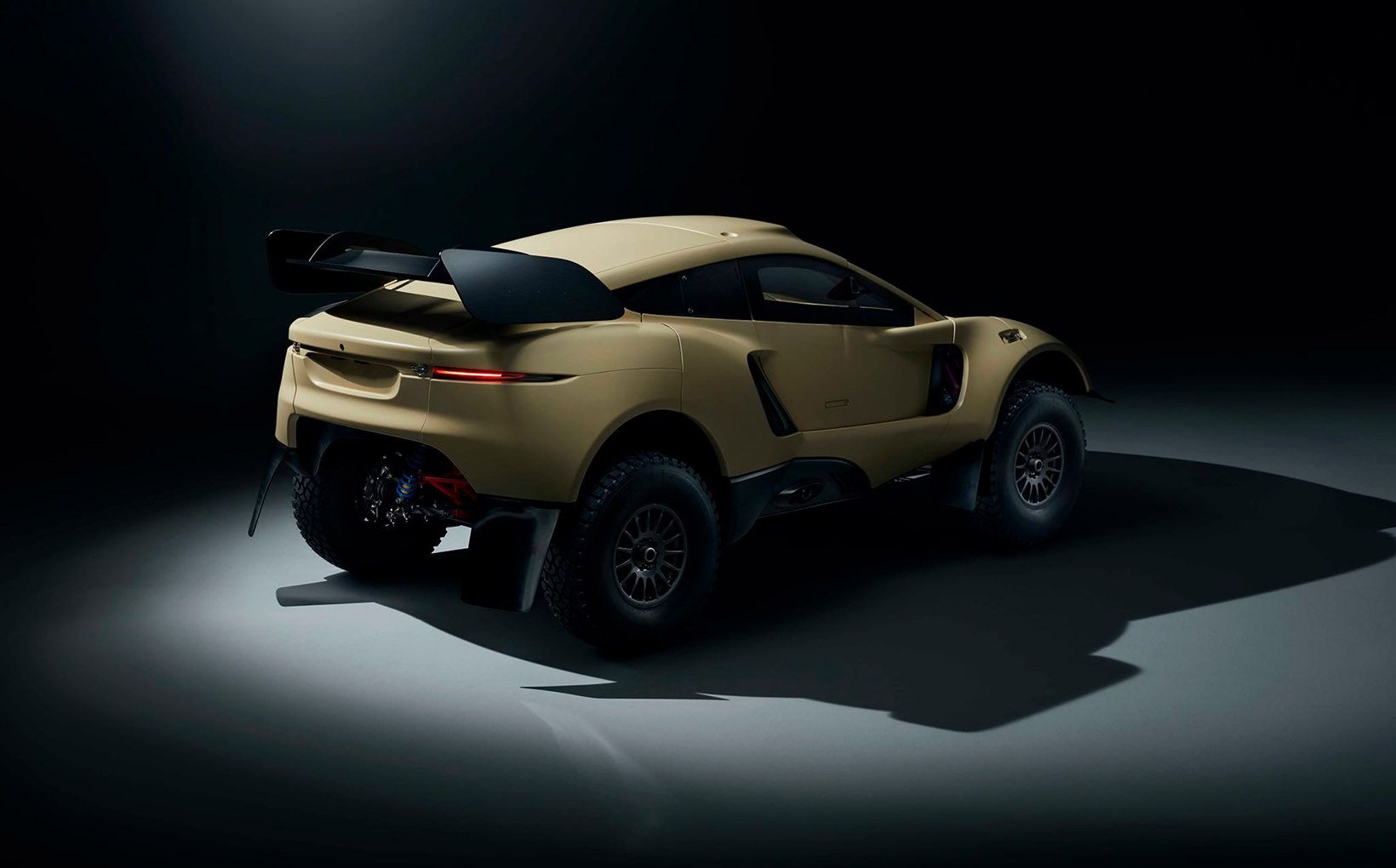 The model’s fastback shape and its high-set wing are aimed to generate downforce when it’s needed, and there’s little boot space, in case you were wondering, because weekend racers just aren’t fussed with such practicalities.

ProDrive’s boss says if anyone is interested in a BRX Hunter T1+ then they know where to find him. Just make sure you have the cash ready!