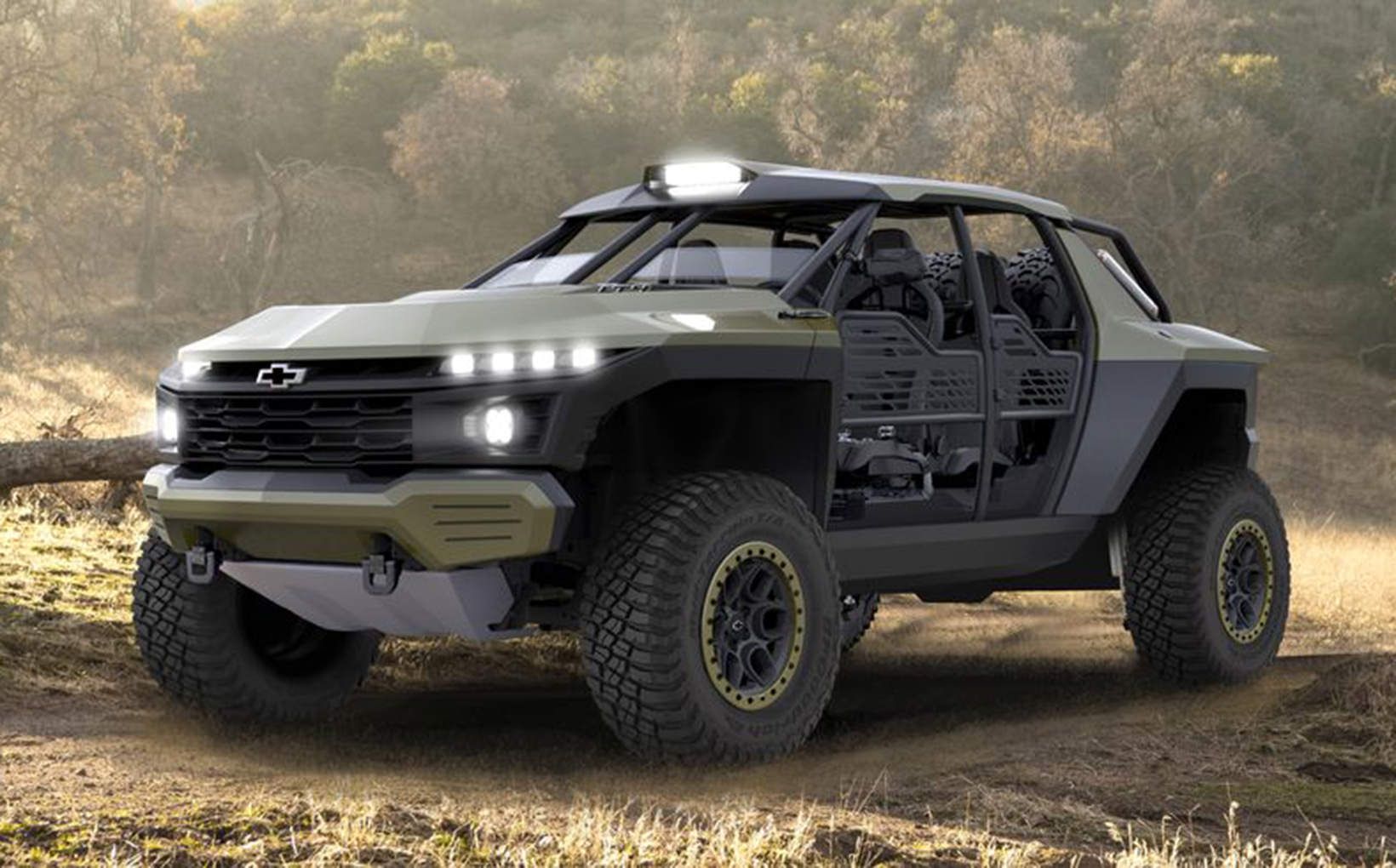 SEMA has returned to the Las Vegas Convention Centre with a vengeance following last year’s virtual event, the Speciality Equipment Market Association pulling out all the stops with manufacturers, buyers, distributors, industry professionals, and the media covering the full gamut of the automotive aftermarket.

Detroit’s big three and their subsidiaries each had substantial displays at SEMA 2021 alongside Japanese manufacturers including Lexus, Nissan, and Toyota. Here, we’ll take a look at just a handful of the dozens of creations on stage at Las Vegas, including those from Chevrolet, Ford, Nissan, Jeep, and Toyota.

This ultra-capable, ultra-rugged, and ultra-spartan off-roader bears an uncanny resemblance to the Warthog assault vehicle from the Halo video game franchise.

The Beast is based on Silverado underpinnings and features a juiced-up 485kW LT4 6.2-litre V8 and 10-speed auto that take power to all four wheels. Those bead-locked wheels measure 20 inches in diameter and run 37-inch A/T tyres, and ride on a custom suspension setup that bestows the beast with 338mm of ground clearance.

With negligible bodywork The Beast delivers outstanding off-road geometry and is protected from bumps and scrapes by substantial underbody bash plates.

The cabin of The Beast is largely exposed to the elements with a small windshield to deflect rain and mud. Safari doors do their best to keep passengers contained, while the cargo area is mostly occupied by a set of chunky spare wheels – no space savers here! 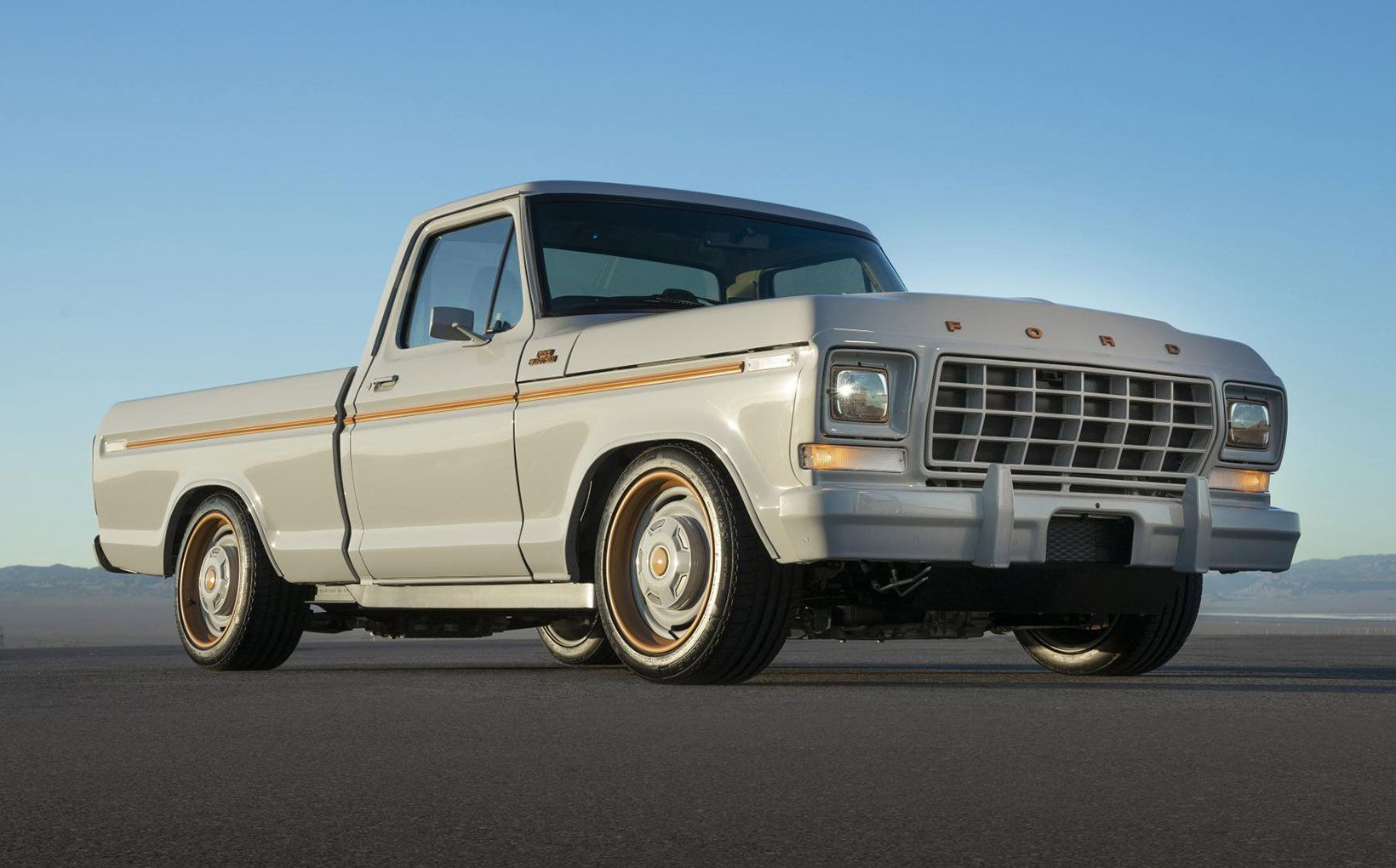 The electric ‘crate’ motors found in the Eluminator show truck have already sold out.

Among the 40 cars, four-wheel drives and utes Ford brought to SEMA was another pure EV, this one showcasing not a car but rather a powertrain. The Ford Eluminator show car – based on the classic 1978 F-100 pickup – features a pair of the same electric motors found in the Mustang Mach- E GT Performance.

The motors output a combined 358kW and 860Nm and are fed by the same battery pack found in the Mach-E. The Eluminator crate motors – part no. Ford M-9000-MACHE in case you want one – will be available to project car builders and retro-modders for US$3900 (A$5300) with each motor capable of supplying 210kW/430Nm.

The crate motor tips the scale at 93kg and is provided with high- and low-voltage harnesses. However, the pack does not arrive with a battery pack or cooling system – batteries sold separately, you might say. 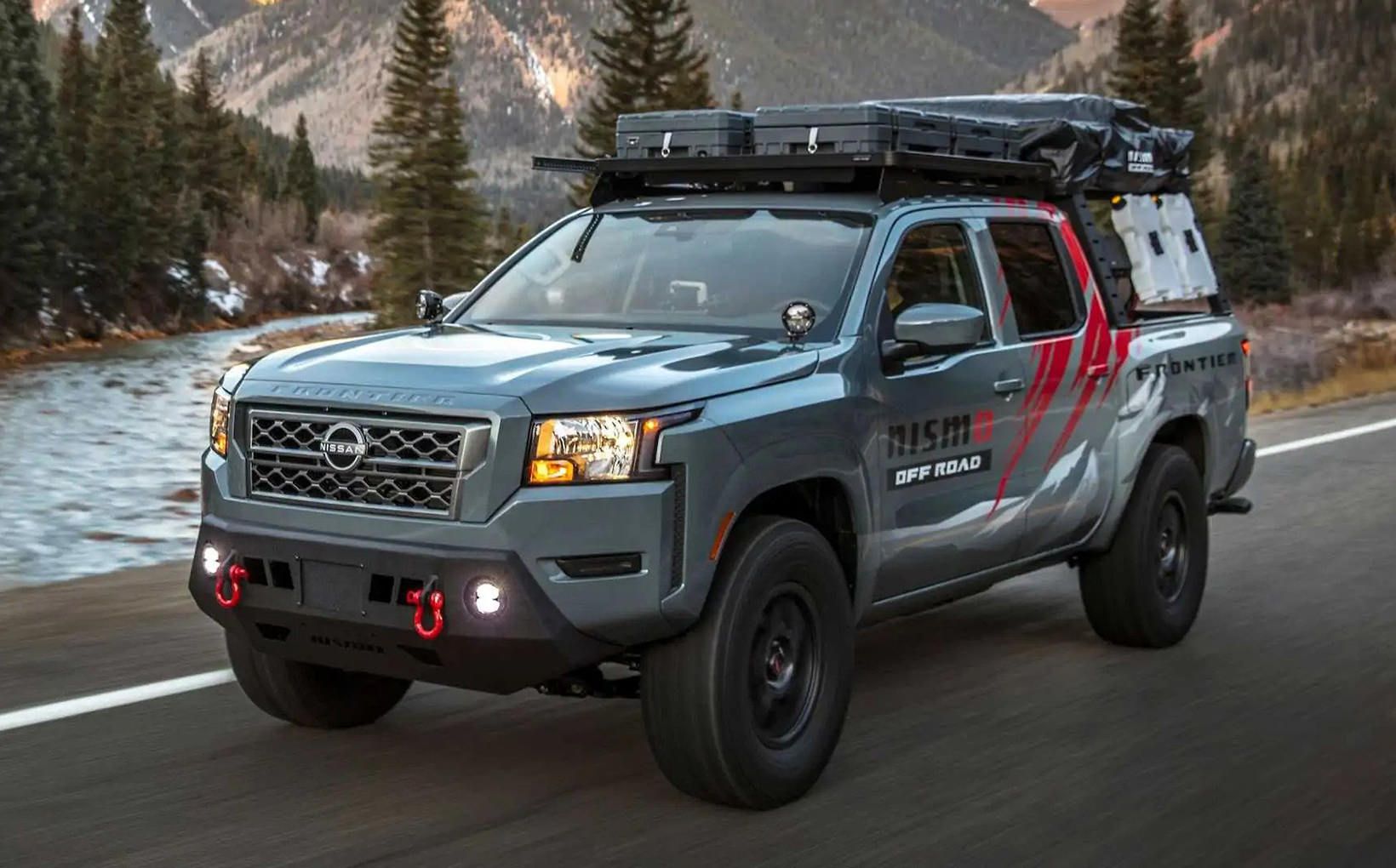 Nissan’s Project Overland Pathfinder looks like it could be a showroom-ready model.

Nissan tore the covers off an adventure-seeking rendition of its Pathfinder SUV at SEMA, the Project Overland ‘concept’ looking so good, you’d almost suggest it’s ready for the dealership forecourt. 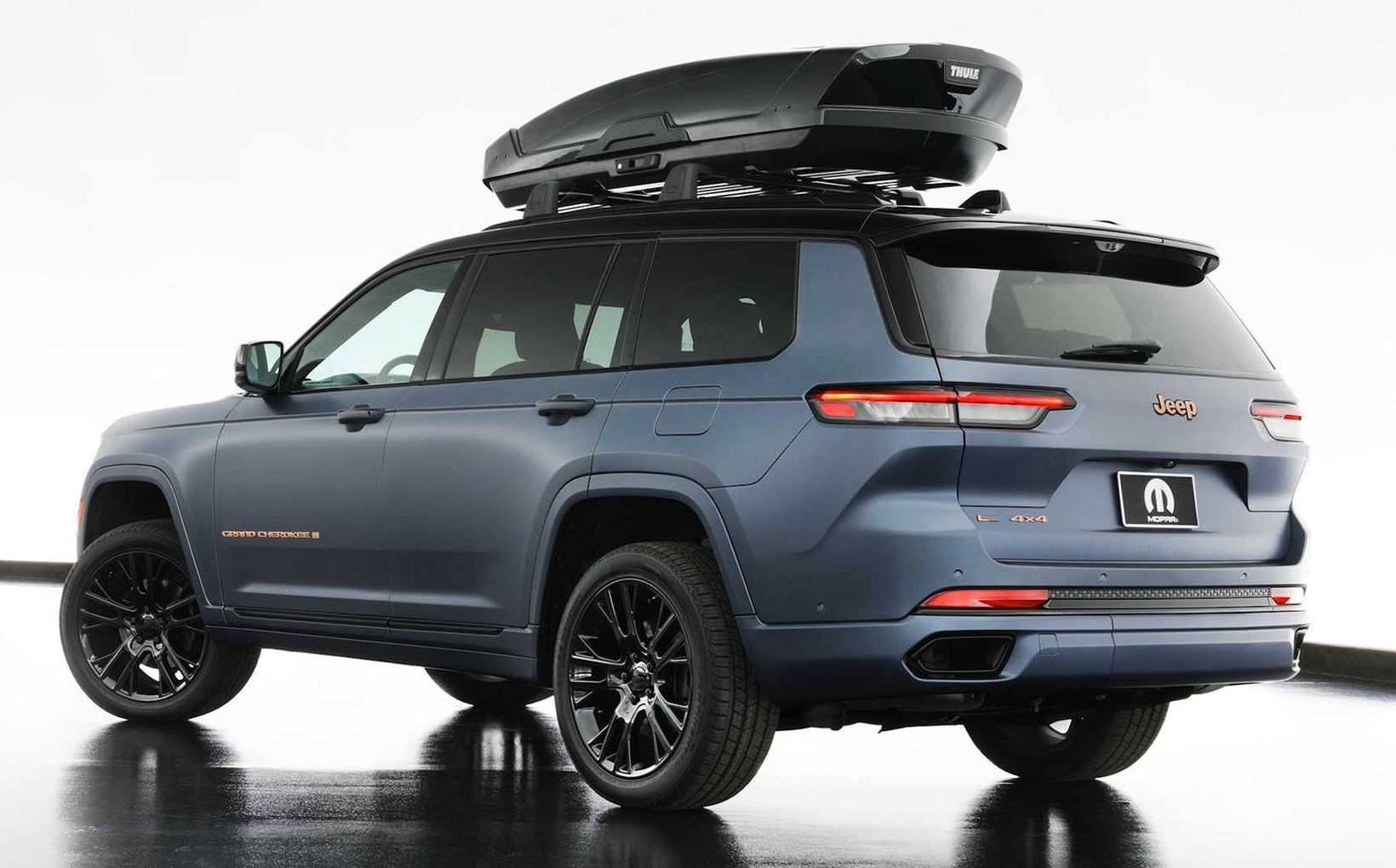 Not one, but two Jeeps take to the stage at this year’s SEMA event.

SEMA and Jeep go way back, and the record continues in 2021 with the unveiling of two concept models – the Wrangler Overlook and Grand Cherokee Breckenridge.

For those with less off-road focus, the Grand Cherokee L Breckenridge concept puts an upmarket spin on the Grand Checker with high-gloss paint, swanky interior materials, and deluxe alloy wheels. 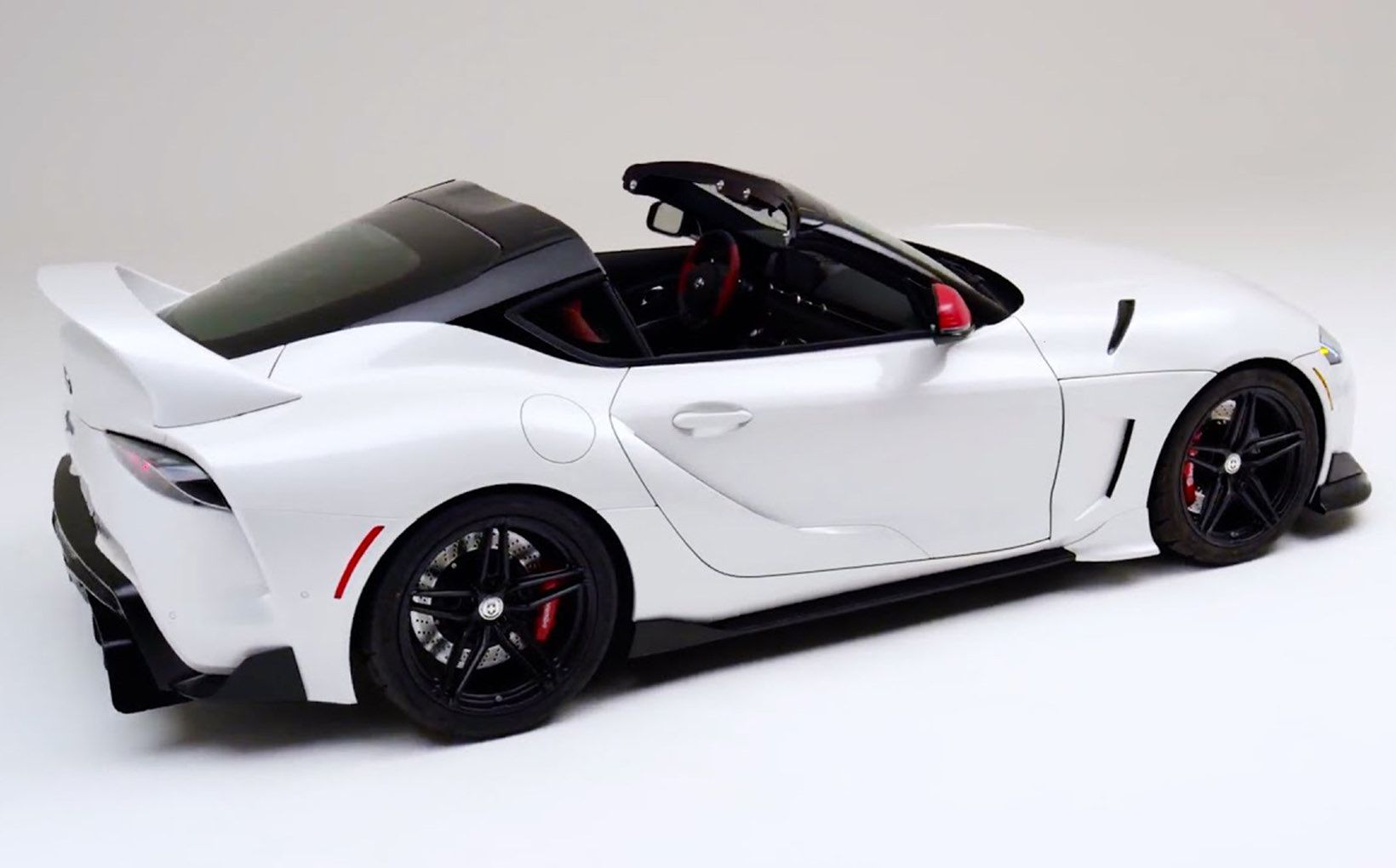 The convertible Supra’s roof is 3D printed from composite materials.

While big American pick-up trucks and SUVs dominated the Toyota stand at SEMA, a pair of Supra concepts were equally interesting to those with a sporting eye. One, the GR Supra Heritage Edition, was already debuted in 2019, but the other is a whole new kettle of Sushi.

Dubbed Supra Sport Top, the targa-roofed two-door boast a removable roof panel that fits between the windscreen cap and the B-pillar hoop. The panel was 3D printed by Toyota’s North American R&D facility and made from entirely from composite materials.

The rear-end of the Supra Sport Top features a blast-from-the-past ‘basket handle’ wing, which is complemented by a suite of underbody panels aimed at keeping the Japanese roadster wheel-side-down.

And we think it may just need it… the Supra Sport Top features the same powerplant as the Heritage Edition, meaning a bigger turbocharger, bigger brakes, improved suspension and 372kW of power!