THE off-road scene went bananas earlier this year when Jeep revealed its V8-powered Wrangler Rubicon 392 Concept for the world to see, followed by even bigger shockwaves last month with the news it would go into production.

The news was bittersweet for Australian Jeep fans however, with the local arm of FCA revealing the new flagship Wrangler is currently only slated for production in left-hand-drive form.

Nevertheless though, the company assured fans that it would put its hand firmly in the air if there was even a whiff of possibility that a right-hand-drive version could eventuate.

It took just four months for the Wrangler Rubicon 392 to go from a concept to a production model.

“At this stage, the Rubicon 392 is going to be produced in left-hand-drive only,” a spokesperson said.

“With that said, we know how much Australians love their V8s so if that changes, we'll be the first to put our hands up.”

Rather than send out a press release through the official media channels as is so often the way when announcing a new model, Jeep opted to capitalise on the power and reach of social media, breaking news of the Rubicon 392’s move to a production model via an Instagram video. 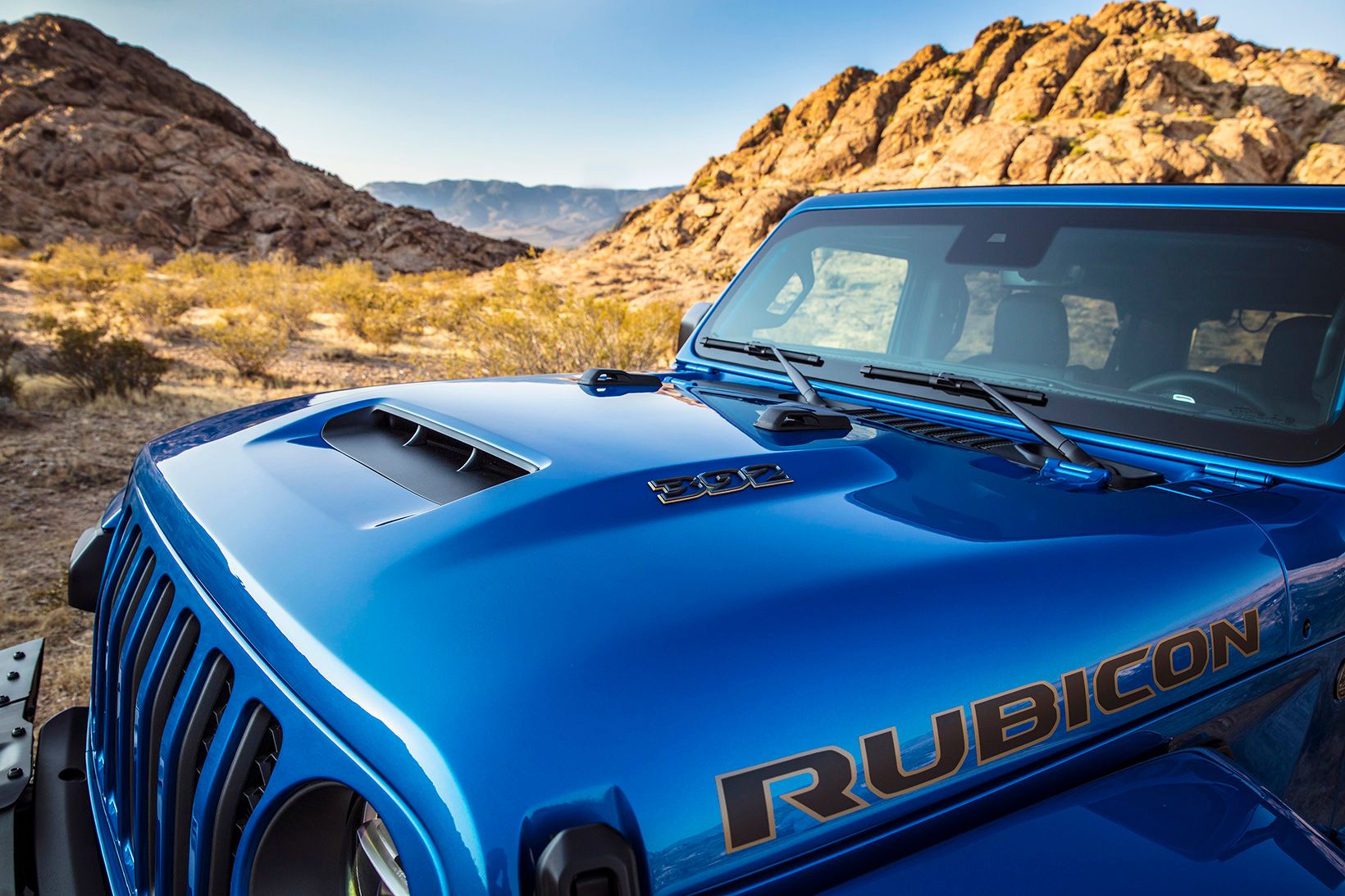 V8 fans will be rejoicing at the news the production version makes more power than the Concept.

The video in question showed a V8-powered Wrangler roaring away from the camera, captioned by “Some concepts are so powerful they storm into reality. Preproduction model shown. Available 2021”.

In an interesting move, Jeep didn’t take up the whole frame with the Wrangler blasting across the desert, instead giving it a little less than half with the remaining room taken up by a mock Instagram interface with the caption “Get dirty faster” accompanied by a series of Jeep-specific hashtags, the last of which read ‘#NotAConcept’.

Those familiar with Jeep’s current portfolio will have been able to deduce – with thanks to the 392 nomenclature – that the V8 in question is the brand’s 6.4-litre ‘Hemi’ unit which has been tuned in this guise to develop 350kW of power and 637Nm of torque – 14kW/27Nm more than quoted for the concept. 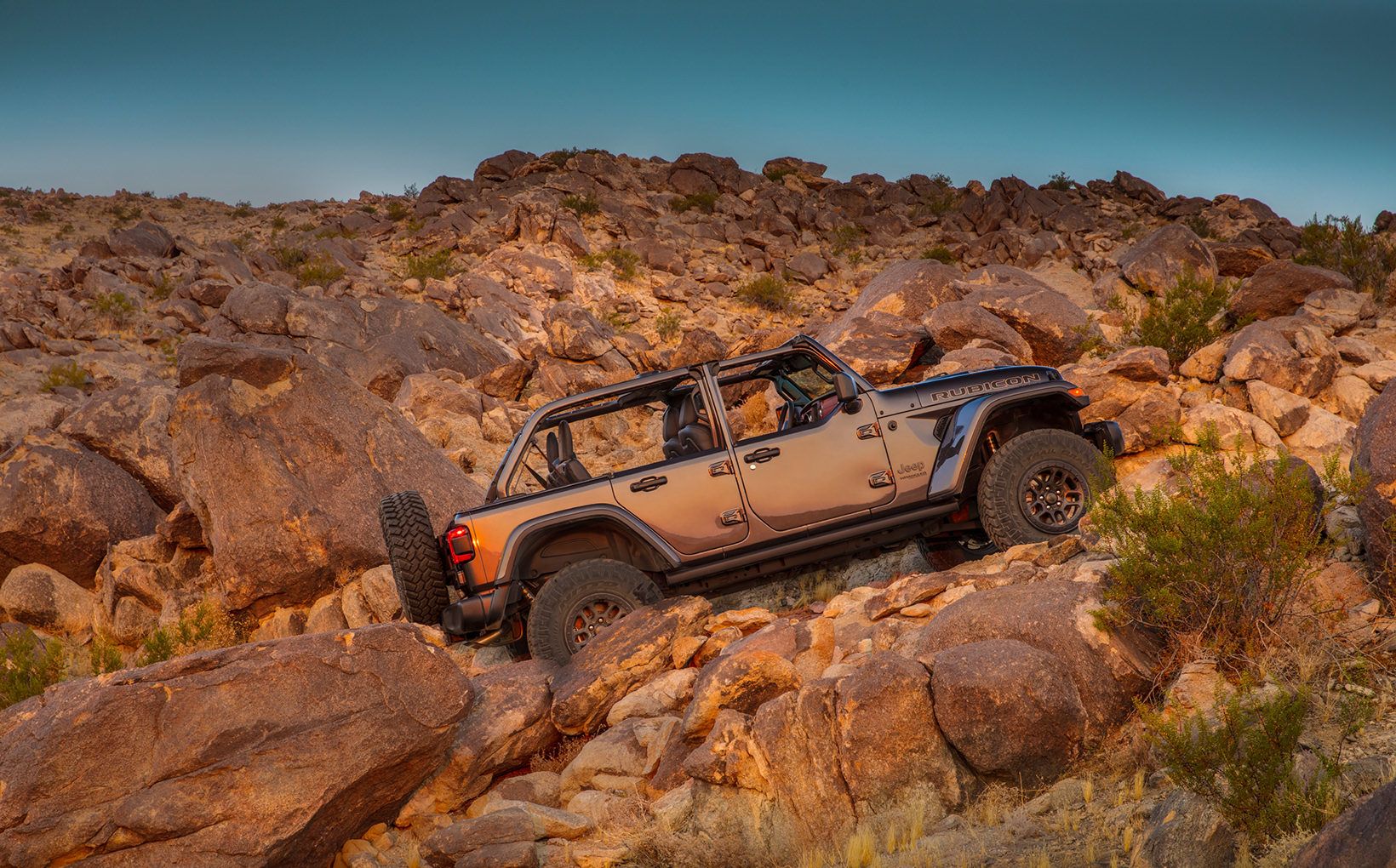 We can’t imagine the fuel bills will be small after a hard day off-roading.

To help the monstrous donk breathe easy, fresh air is channelled in by a tri-level intake system courtesy of Jeep’s ‘Hydro-Guide’ system that’s said to channel more than 56 litres of water per minute away from the engine during hardcore off-roading.

This breathability, according to Jeep, will allow the Rubicon 392 to reach its undisclosed top speed even if its functional bonnet scoop is blocked or clogged.

As usual for a high-end Jeep, drive is sent to all four wheels via an eight-speed automatic transmission with 0-97km/h (60mph) dispatched in a claimed 4.5 seconds, despite rolling on chunky 33-inch off-road tyres.

The Wrangler Rubicon 392 is fast in a straight line but more at home off-road.

While the straight-line performance is obviously impressive and will be sure to be entertaining, the Wrangler name and especially the Rubicon nomenclature has always been closely associated with off-road capability, which is why Jeep has decked the Rubicon 392 out to be able to go virtually anywhere.

Just because it is pegged as the ultimate off-road (production) Jeep, doesn’t mean the Wrangler Rubicon 392 misses out on the bells and whistles in terms of standard equipment. 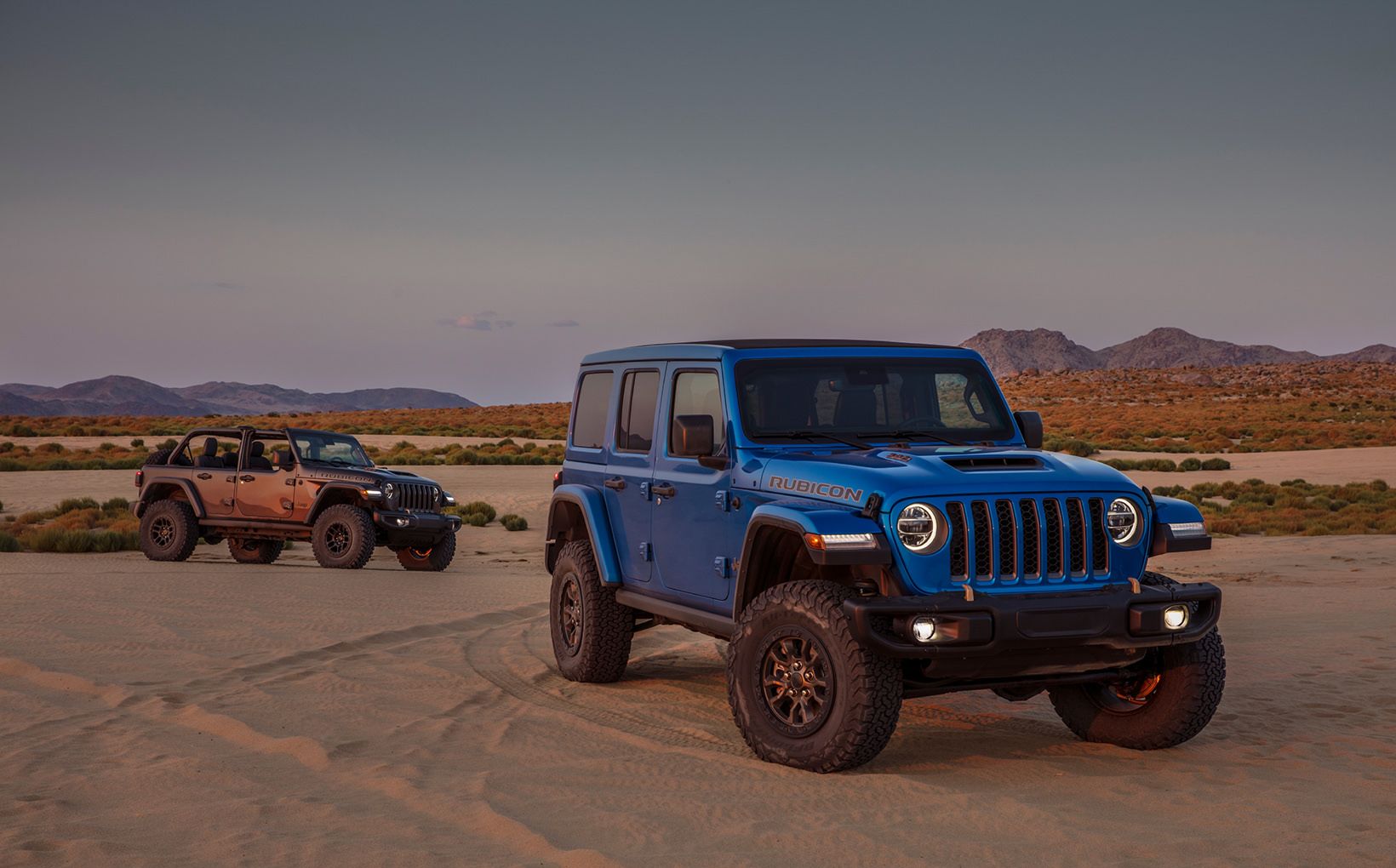 Standard kit largely matches the rest of the Wrangler range.

Standard creature comforts include a leather steering wheel, aluminium paddle shifters, leather upholstery, performance seats, bronze exterior accents, a steel bumper, LED head- and tail-lights, remote proximity key entry and an active exhaust to help let the world know exactly what is about to drive over the top of it and disappear into the distance.

The world waits now with baited breath to see what Ford, General Motors or even Toyota have in response to the new fire-breathing Jeep, especially Australia which has been tantalised by the prospect of a V8-powered Ford Ranger Raptor or local introduction of the Blue Oval’s new Bronco.

“Bronco is a vehicle developed with attributes for specific markets, particularly North America, and is not being offered in right-hand drive,” a Ford Australia spokesperson said. 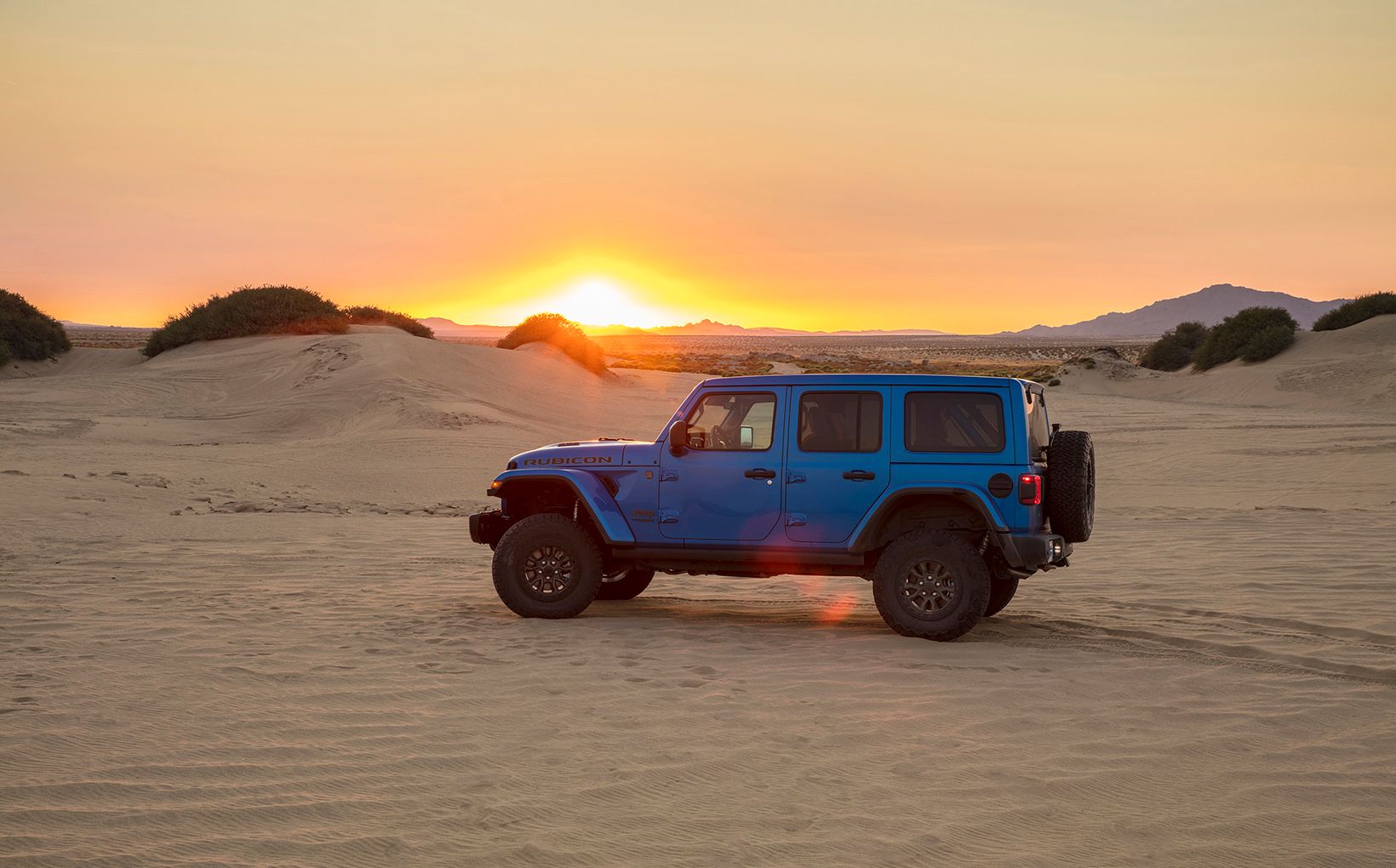 With no direct rivals on the horizon, the Rubicon 392 could have things all its own way.

“We have no news to share about any alternative Ranger powertrains.”

With Ford lacking a direct rival and the heavily-rumoured Toyota GR off-roaders still years away, Jeep could have the admittedly niche high-performance off-road segment all to itself in Australia if the Rubicon 392 does eventually make it here.

Only time will tell if Jeep plans to transplant the thumping bent-eight into the Wrangler-based Gladiator or even adds a supercharger… Wrangler Trackhawk anybody? 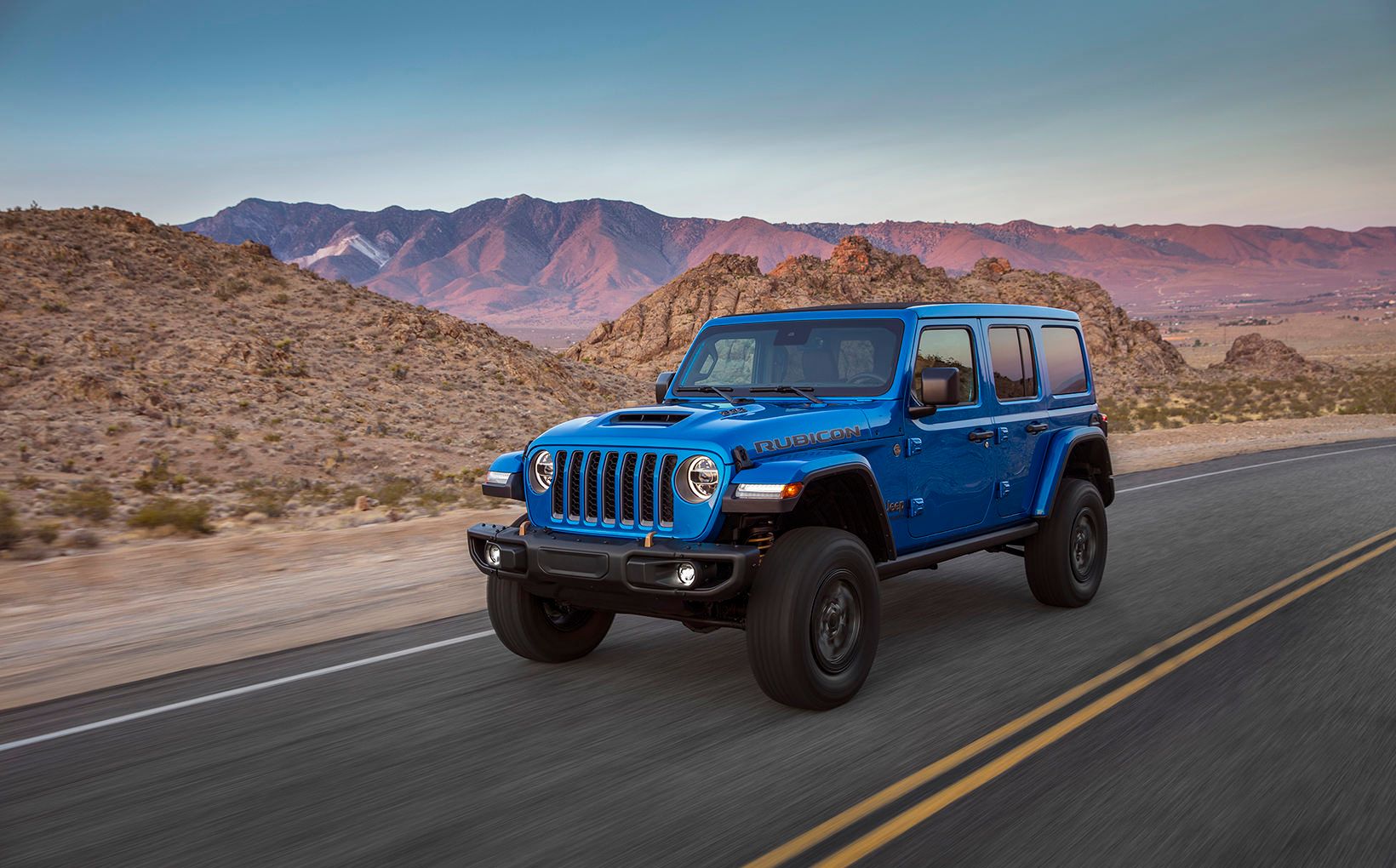 How long before Jeep transplant the supercharged 6.2-litre unit under the bonnet and create a Wrangler Trackhawk?