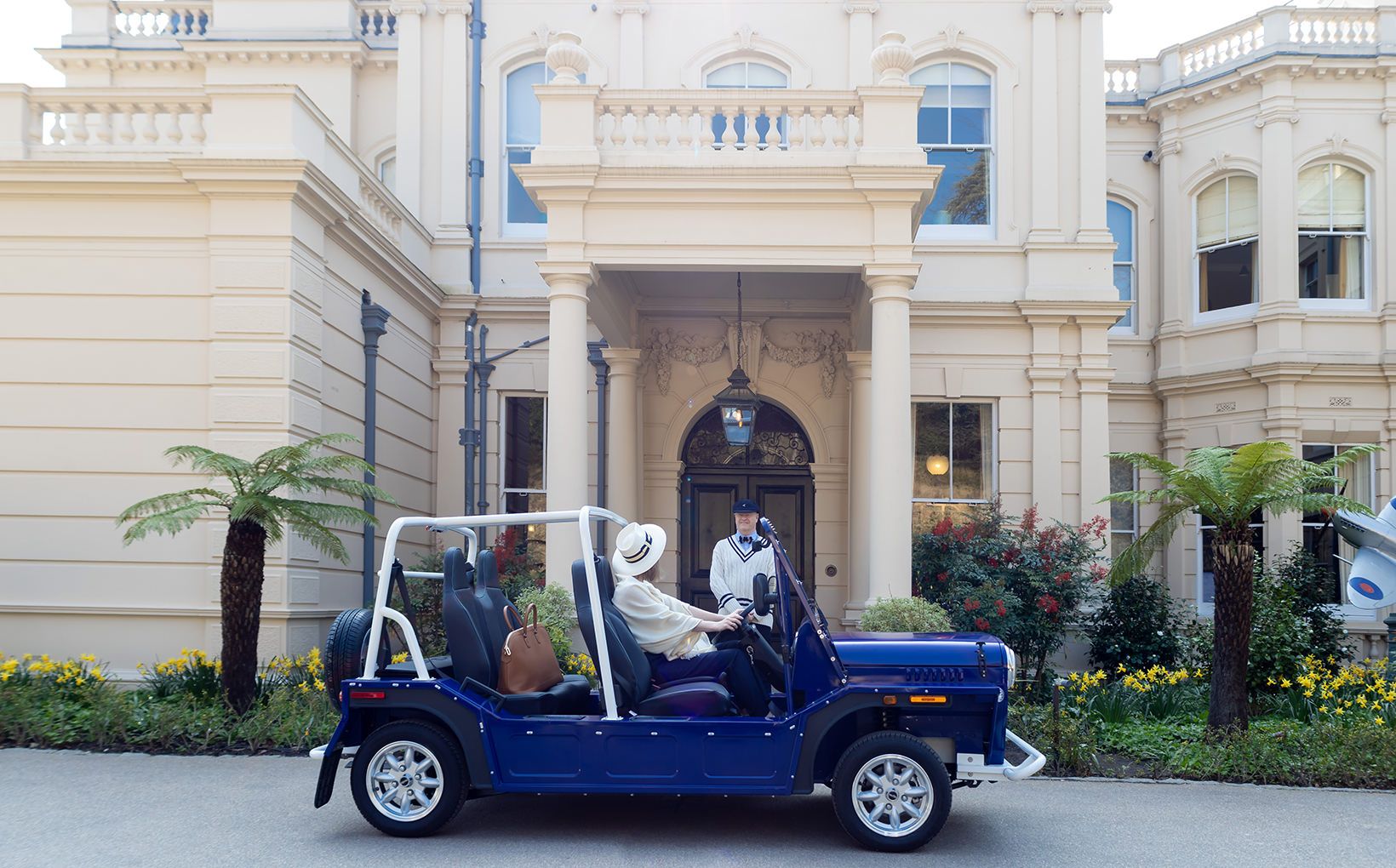 THE original Mini Moke ran in production, off and on, for more than 50 years and around 50,000 units were sold, which isn’t all that good a strike rate when you think about it.

But many “Mokies” loved their little front-wheel-drive, utilitarian, wannabe Jeeps, well, once their many idiosyncrasies (such as the moisture sensitive, front-mounted distributor, which you’d fix by putting an ice cream tub over it) were sorted out. With fuel tanks in its side bulkheads and precious little in the way of safety features – the original Moke would never be allowed to be produced today.

However, British company Moke International owns the original trademark and, a new-generation model, which remains faithful to its roots, is now being engineered and manufactured in Britain. 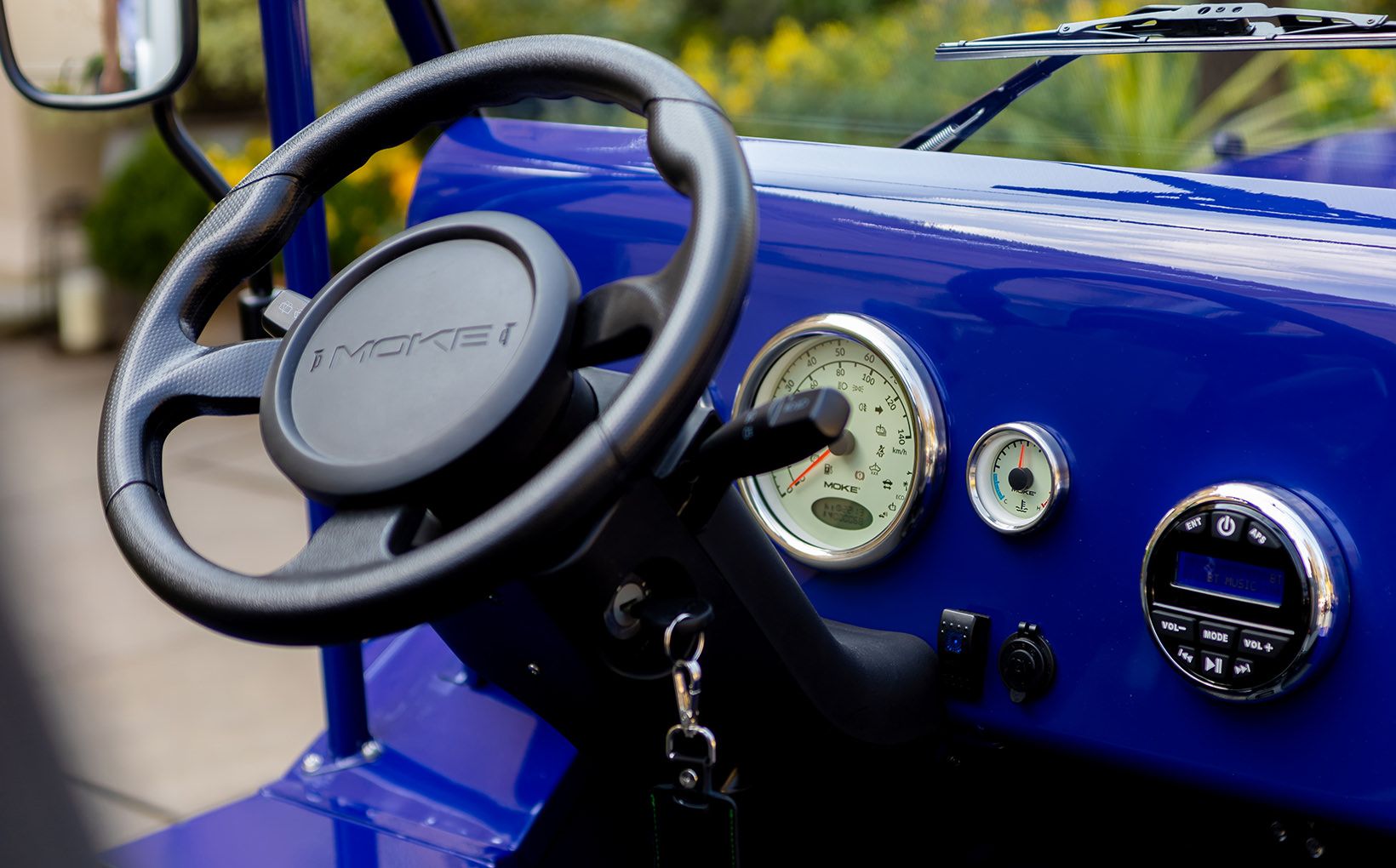 Wet electrics shouldn’t be a problem

In a seismic shift last year, the company committed to sustainable mobility and street legal, battery-electric Mokes started shipping to Europe last month. The UK price is £29,150 or about $A53,000.

It utilises the latest technologies throughout and after a false start with petrol-powered Mokes a couple of years ago, Moke International looks set to power ahead with a fully electric car only.

The Moke continues to be treasured for its “unique” styling and the feelings of freedom it evokes. Once again, it’s becoming the must-have accessory – in some of the world’s sunniest destinations.

“French customers get their electric Mokes around the same time.”

Moke International has been able to partner Beaverbrook estate country house as a focal point in the UK for its vehicle. In-house guests will be encouraged to explore the surrounding southern UK district in silence in an electric Moke.

This kind of operation has been done before with specific car brands at establishments such as Miataland in Italy where guests can avail themselves of a fleet of Mazda sports cars to explore the local area… free of charge, apart from fuel costs.

But there is no fuel cost associated with the electric Moke, which can be recharged in about four hours from a domestic power point for a 120km range at speeds up to 80kmh.

Beaverbrook house is in Surrey, a county criss-crossed by secluded lanes bisecting rich pasture and forests. You’d have to watch out for that pheasant in the hedgerow in a silent vehicle such as the electric Moke. 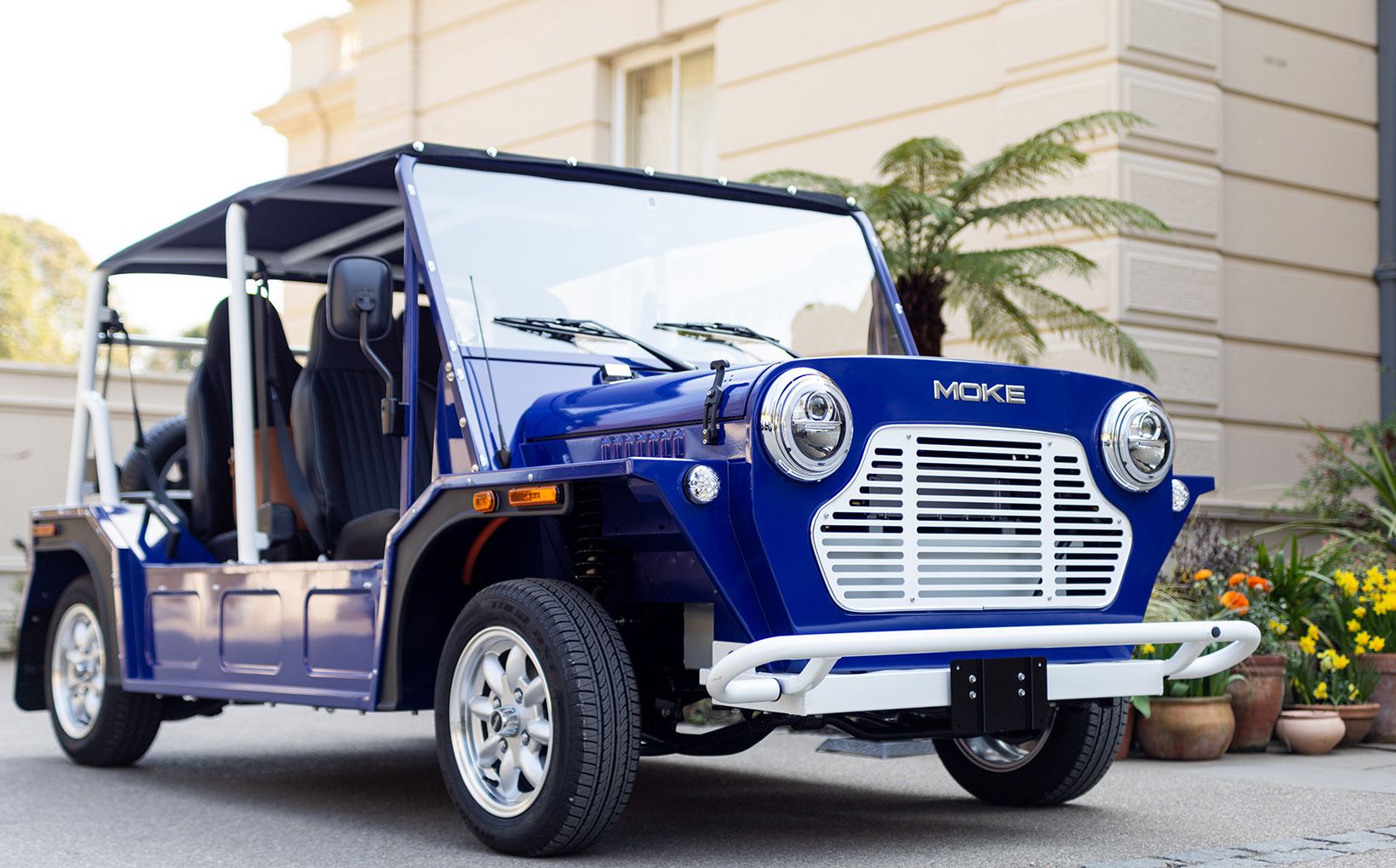 Extrapolate all that to France’s Cote D’Azur and Saint Tropez and you have a similar scenario, only sunnier and hotter, which is perfect Moke territory, especially with the roof off.

The French Moke experience builds on the brand’s beachy, lifestyle past by allowing visitors to Bo-House and Tardieu Immobilier access to a Moke EV while in residence.

Though Moke Electric doesn’t have anything approaching other contemporary EV’s range – or speed, for that matter, Mr Kennedy says it’s enough for the job at hand.

“It equates to at least three trips from Cap de Ferrat to Monaco and back,” he said.

Additional crash protection is afforded by a half roll cage structure up the sides and across the roof of the vehicle.

“A customisation program to tailor your Moke to your own specific tastes starts later this year with a number of options like wheels, upholstery and audio system becoming available,” said Mr Kennedy.

It weighs 800kg (about 250kg more than the original petrol-powered car), but the power output is similar at 33kW. Later petrol-powered BMC and Leyland Mokes ran with up to 1275cc four-cylinder engines with significantly more power. 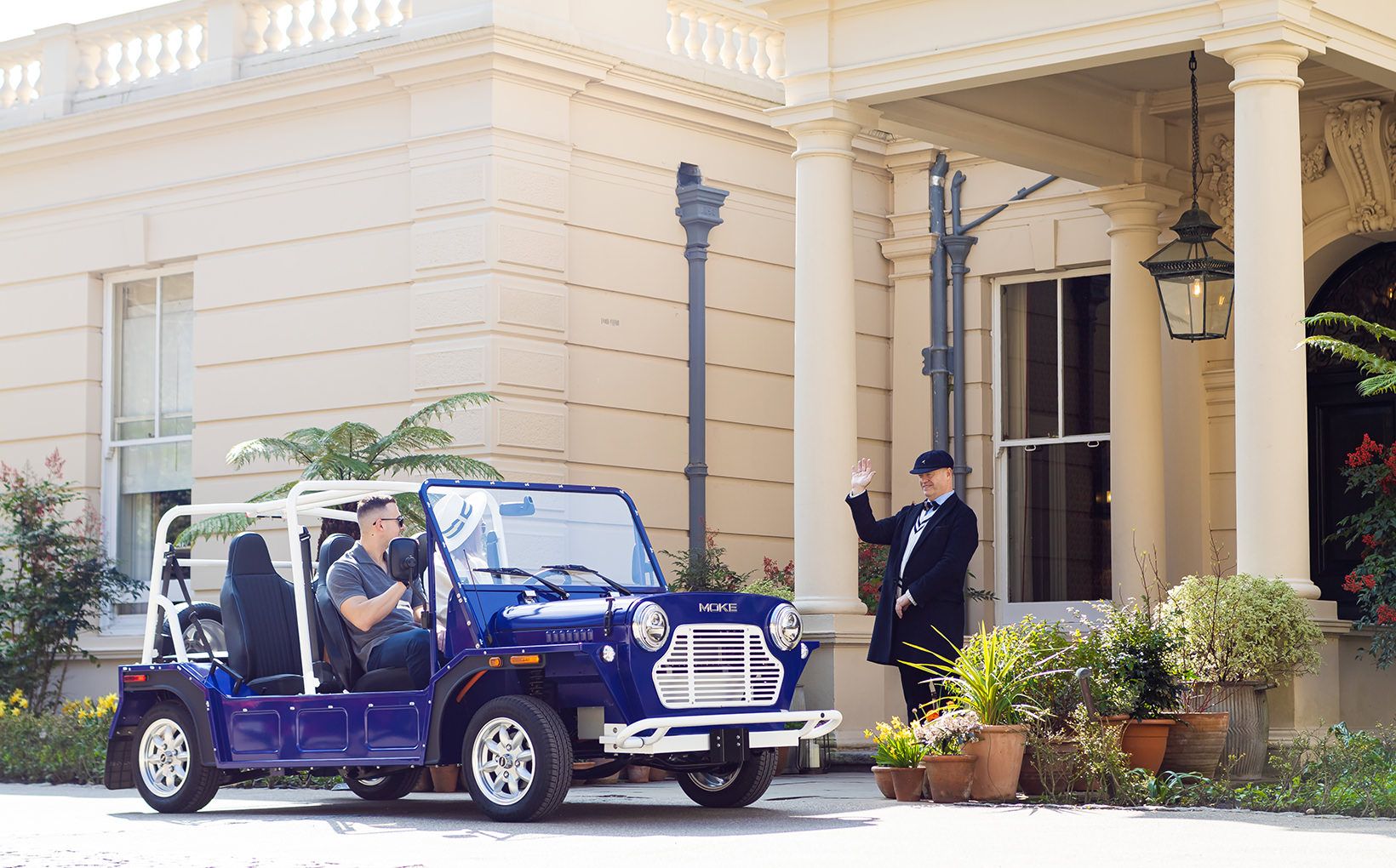 In a big departure from the original design, the Moke Electric powers its rear wheels and not the fronts. It is available in right and left-hand drive configurations due to former engine bay space.

The London-based brand says the Moke Electric’s battery cells, motors, and inverters are sourced from top tier European suppliers, but does not provide a battery capacity for its new model

Moke Electric is built under the guidance of ex-Rolls-Royce product lead Isobel Dando and was last year completely redesigned to improve acceleration and driveability.

The new BEV is equipped with power steering, regenerative braking and a heated windscreen. Air conditioning is obviously off the agenda.

“Moke is all about country roads, beach excursions, the summer breeze in your hair and enjoying the journey, rather than hurrying from A to B,” said Mr Kennedy.

“We’ve taken the original Mini Moke, which was created by Sir Alec Issigonis, and reimagined it for today’s world – and tomorrow’s – as a fully electric vehicle.” 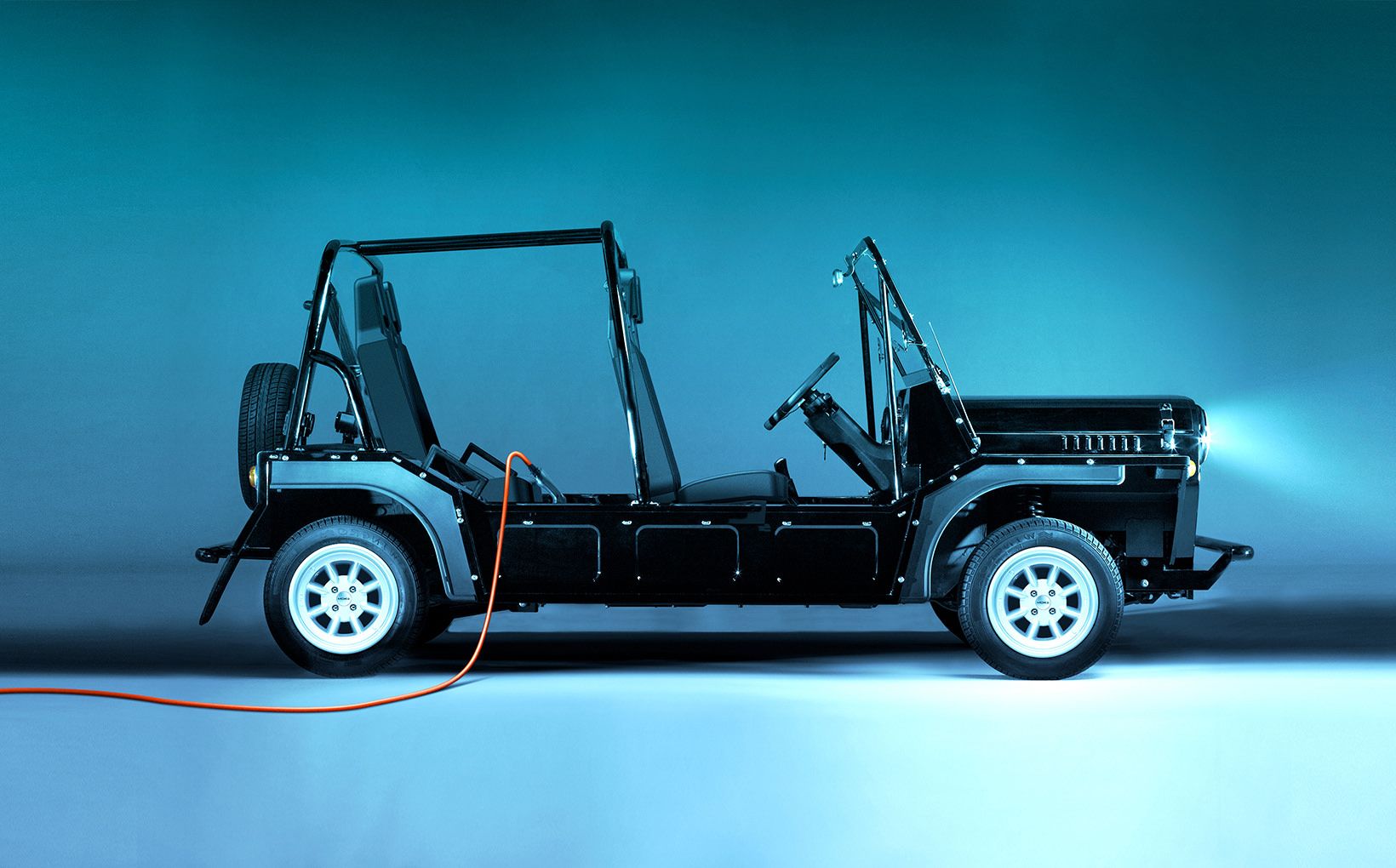 “Our team has been working relentlessly for three years to engineer and manufacture a worthy, sustainable successor (to the petrol-powered original) with the latest technologies.

“Made in Britain, the Electric Moke is now ready to inspire and delight a new generation,” he added.

Moke Electric is not yet available in Australia but expressions of interest are being accepted. Price might be a stopper when you add in transportation costs.

The last Mini Moke sold in Australia weighed just 620kg (kerb) and was powered by a 1.1-litre petrol engine that produced 37kW/81Nm and drove the vehicle’s front wheels via a four-speed manual gearbox. Its top speed was advertised as 113km/h.