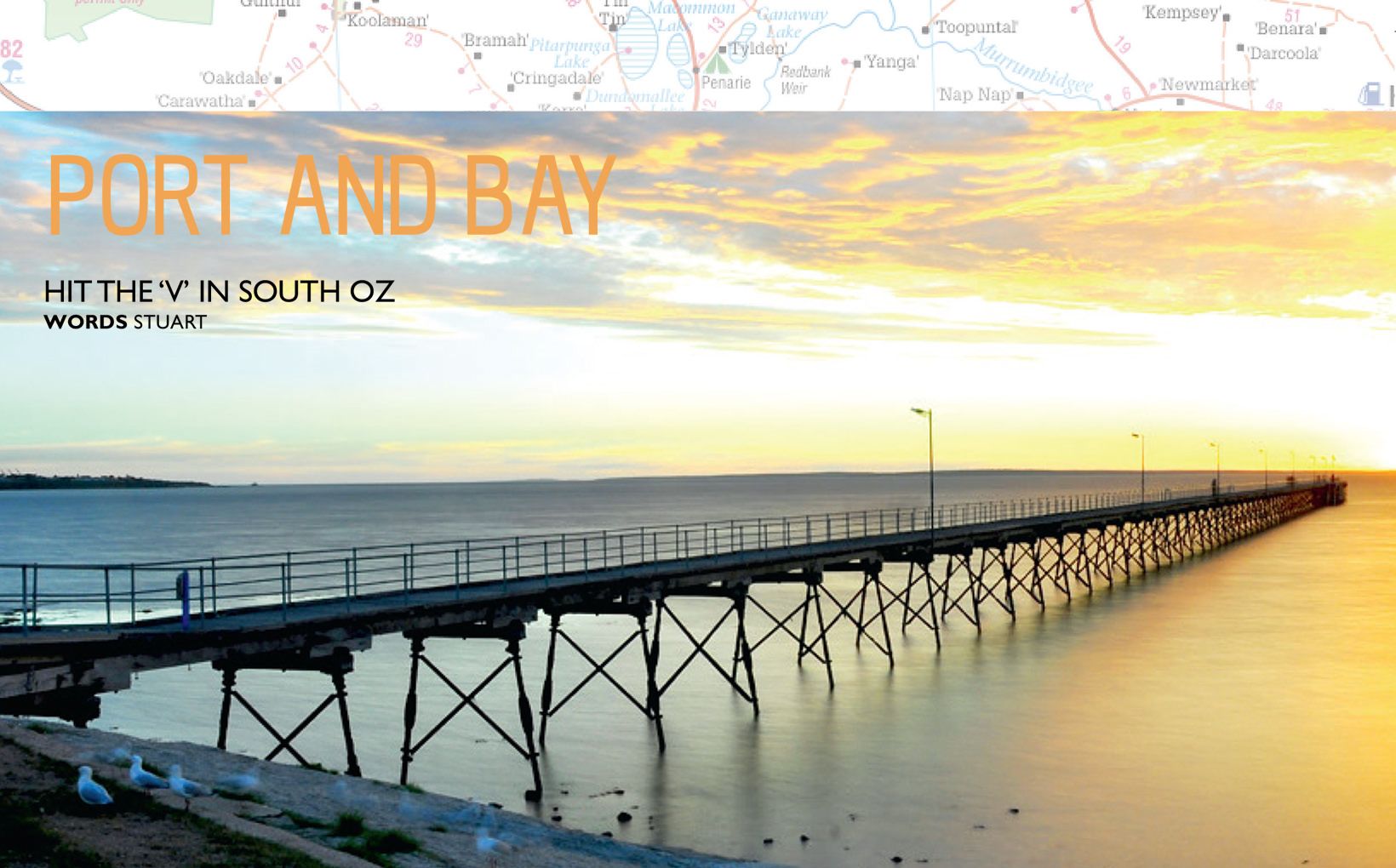 Distance – 750km
This ride is a very casual and scenic route. Rather than ripping through corners this route virtually hugs the V shaped coast from Port Augusta, down to Port Lincoln and back up to Ceduna. It is a very lengthy ride if you wanted it done in one day but then you wouldn’t really be soaking in the sights, so make it two days – heading down to Port Lincoln on day one so you can get your shark on and up to Ceduna on day two.

I think it’s time for a port, so let’s start off in Port Augusta…

PORT AUGUSTA
A small but fairly major town in SA. Port has all the services you’ll need and has some nice sights to see, like the Australian Arid Lands Botanic Garden. You don’t need to be a plant lover to visit these gardens as you’ll see a lot of what is inside once you’re out on the route, with many plants being specific to this area of Australia. But you’ll know their names.

WHYALLA
Surprisingly, Whyalla is the third most populous city in South Australia after Adelaide and Mount Gambier. It is a seaport with the town known as “Steel City” due to its integrated steelworks and shipbuilding heritage. The port of Whyalla has been exporting iron ore since 1903.

COWELL
Grab some fuel if you need it, or get Lucky in Cowell by visiting nearby Lucky Bay.

TUMBY BAY
A typical attractive and pleasant Eyre Peninsula coastal town, of which you’ll find several along this route.

POINT LINCOLN
Claims to be the “Seafood Capital of Australia” and is a major commercial centre which means you can get just about anything and everything here. Not only a beautiful township overlooking Boston Bay, Port Lincoln makes an ideal base to explore the coast and experience Eyre Peninsula first hand. Make your time here memorable by participating in one of the many exciting tours and attractions on offer in and around Port Lincoln and Eyre Peninsula. Go shark cage diving (which is highly recommended!) or swim with Australian sea lions.

Dining out in Port Lincoln is always an adventure whether your taste ranges from traditional hotel fare, a night out at a specialist restaurant or a good old fashioned take-away. Make sure to sample some of the fantastic seafood, seeing the place is the Seafood Capital of Australia – no wonder there’s so many sharks! You can buy direct and cook up a seafood feast or dine out on the local produce.

WANGARY
More just a marker on the map in case you’re looking at doing the optional route to Coffin Bay.

ELLISTON
Another great place to go cage diving with sharks. You never know, Jaws might come and say hello to you, just don’t leave any brown stains in the water!

PORT KENNY
A very small town which is little more than a marker for this route if you want to do the Venus Bay option.

STREAKY BAY
A very pretty town, Streaky Bay has lots to offer like stunning scenery and loads of fish to catch. Try your hand at catching fish like King George Whiting, Blue Swimmer Crab, Snapper, Salmon, Flounder, Squid and many more species. Most services are available at Streaky Bay.

SMOKY BAY
Another small coastal village with great fishing. If you love oysters, Smoky Bay oysters are renowned throughout the world for their sensational “Sweet Ocean” taste.

CEDUNA
The name Ceduna is a corruption of the local Aboriginal word ‘Chedoona’ and is said to mean a place to sit down and rest and that’s what you’ll want to do as you’re at the end of this route, so it’s time to sit back and soak in all t he wonders you’ve experienced. Ceduna, being a larger town along this route, has all you could ask for including a good campsite. 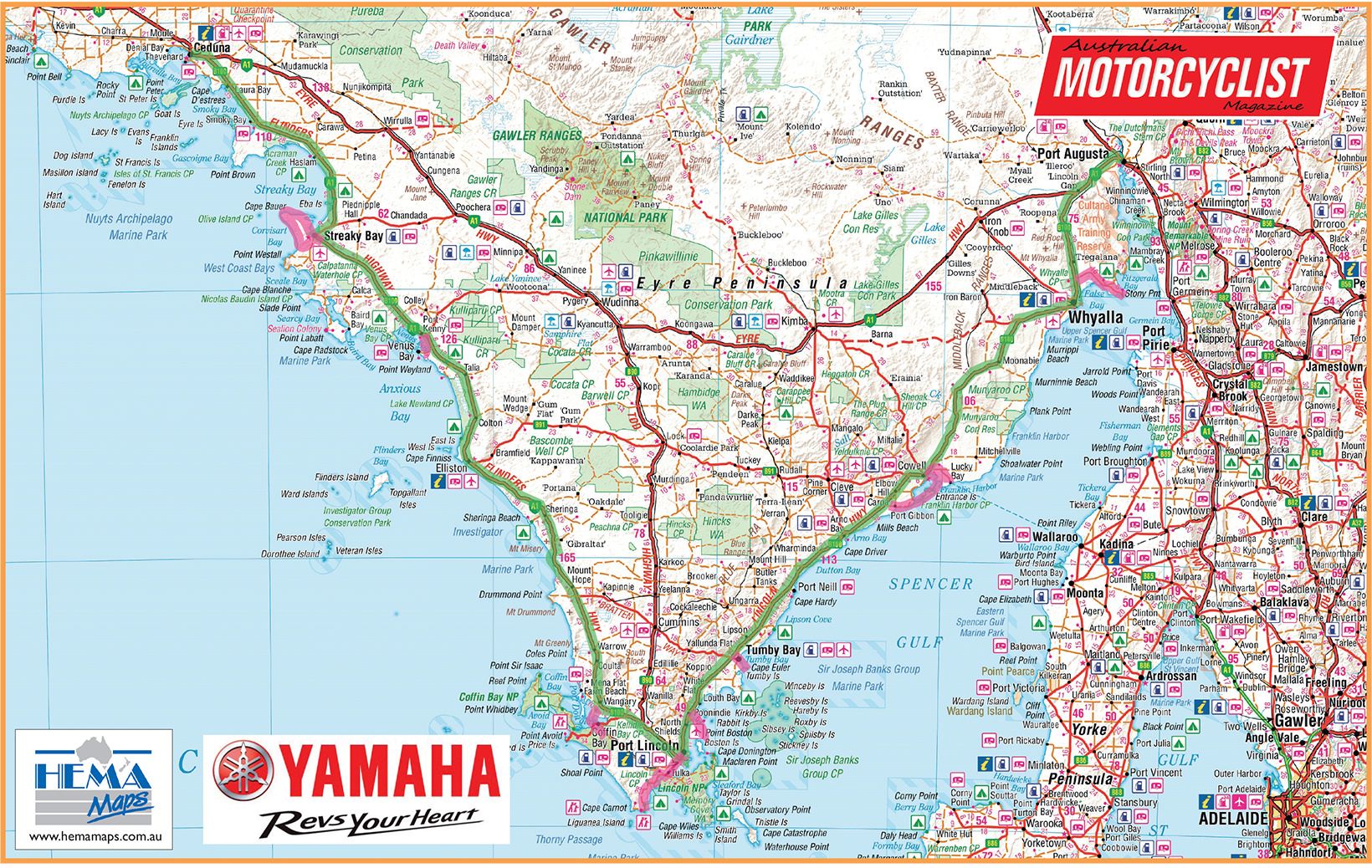 Distance – 750km
It’s fairly hard to get lost along this route, as with the last couple of pullout maps we’ve done, making things simple so you can maximise the fun. This is sometimes the best way, not having to constantly look at your map or GPS every five seconds! Head south out of Port Augusta on the Eyre Highway and continue straight around 25km out following the signs, “B100” and “Pt Lincoln”. The name of the road changes here to the Lincoln Highway which you continue to follow all the way down to Whyalla.

Continue on the Lincoln Hwy down to Cowell and then all the way down to Port Lincoln. Once you’ve freshened up and/ or filled up head northwest on Western Approach Road which is a kilometre or so out of the main town centre.

This soon turns into the Flinders Highway which takes you all the way to Ceduna.

Options
There are many options you can take for even more scenery along this route, just be wary of the sharks! Most of these routes are along dirt or sandy roads (but not all), so please keep this in mind. We’ve highlighted them in Pink for you and they entail…

Wangary to Kellidie Bay and Coffin Bay (Just don’t get in one!)