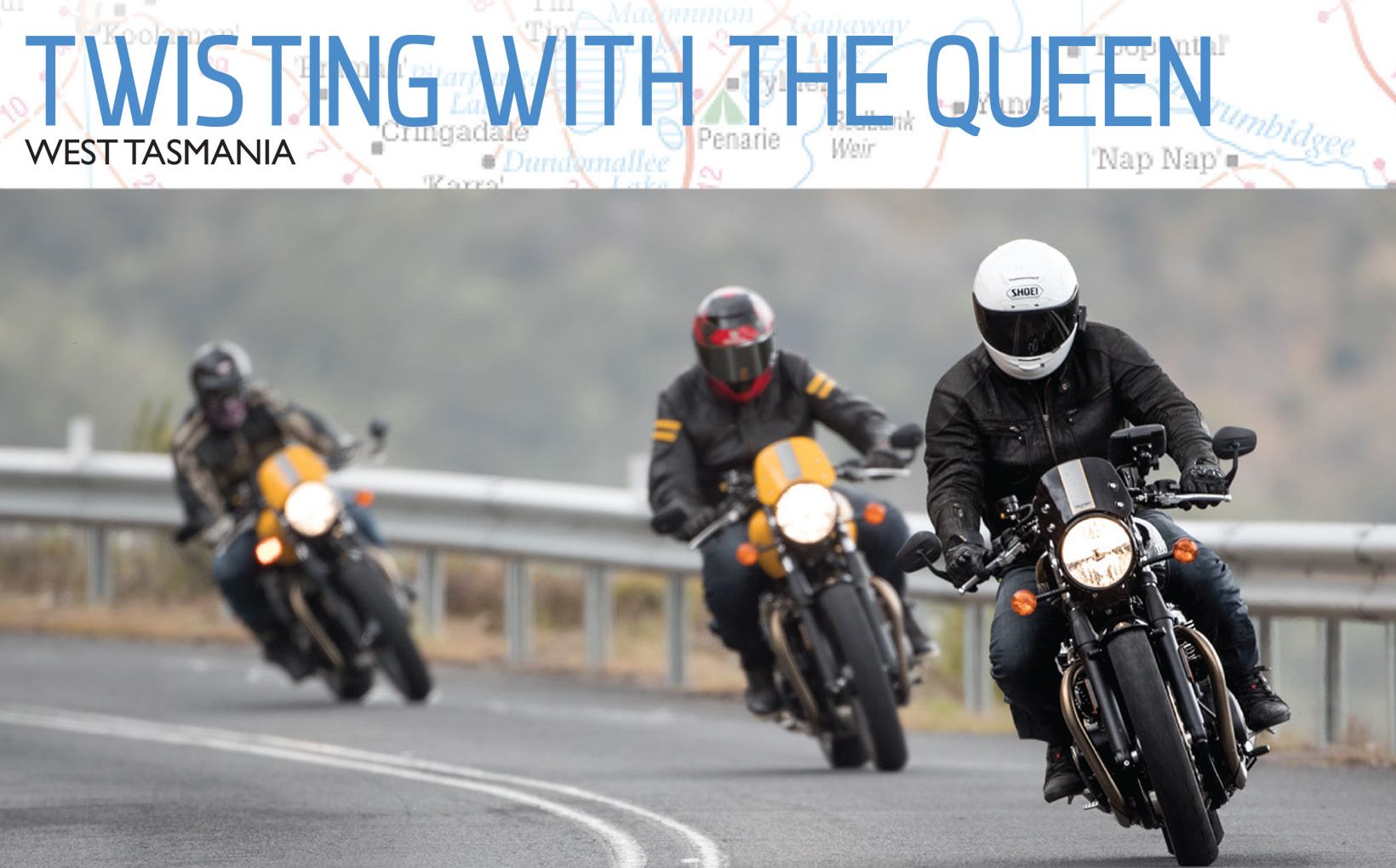 A man walks into a bar and and says "What do 'Zee', Bridge', ‘Queenie’ and ‘Straw’ all have in common?” The people in the bar all stare back with blank faces thinking that this bloke has lost his mind. He then pipes up and says, “Twisties! What else do you think Zeehan, Queenstown, Strahan and Derwent Bridge all have in common!” Okay, so I won’t give up my day job to become a comedian any time soon, but this month’s map is all about some of Tassies finest twisties which centre around Queenstown.

You can ride this map in whatever configuration you want.

I did the Queenstown, Strahan, Zeehan, Queenstown, Derwent Bridge and back to Queenstown way, but depending on where you base yourself, it is always massively enjoyable. Maybe ride it one way, then do it the other!

Queenstown’s history has long been tied to the mining industry. This mountainous area was first explored in 1862. It was some time after that when alluvial gold was discovered at Mount Lyell, prompting the formation of the Mount Lyell Gold Mining Company in 1881. In 1892, the mine began searching for copper. Due to the extensive mining the mountains surrounding Queenstown have unusual pink and grey hues that come from the conglomerate rocks on the two most adjacent mountains - Mount Lyell and Mount Owen. Owing to a combination of tree removal for use in the smelters and the smelter fumes (for about 40 years), along with the heavy annual rainfall, the erosion of the shallow horizon topsoil back to the harder rock pro? le contributed to the stark state of the mountains that you see today. If you’ve got time, at the top of the ’99 Bends’ there’s a viewing platform on Iron Blow Road, it’swell worth stopping and having a bit of a look.

All services are available in Queenstown and as with most of Tassie, there’s some quaint little places to stay.

Zeehan, like other West Coast mining towns, has seen many booms and busts, making it a living museum full of character and fascinating stories. Today, Zeehan’s Main Street is lined with grand old buildings like the Gaiety Theatre, supposedly visited by Dame Nellie Melba, beautifully restored and still entertaining locals and visitors. The mining museum is a gem.

And for something different, at the end of the street you’ll find the Spray Tunnel, a 100-metre abandoned railway tunnel that you can walk, ride or drive through.

Fuel and beautiful places to stay are available.

A lovely fishing town, Strahan is full of stories from the days of convicts and pioneers toughing it out in Tassie’s wild west. Nearby in Macquarie Harbour is Sarah Island, once a notorious convict prison and a powerful reminder of the brutal treatment of Tasmania’s convicts. In fact, Strahan reminds me a bit of the fishing village from the movie, Perfect Storm. You go into the pub and there’s many reminders of the fishermen that have lost their lives at sea. It’s not called the Wild West for nothing, I guess.

All services are available in Strahan, along with some very nice restaurants.

There’s three things at Derwent Bridge that you’ll want to consider. The first is fuel: no matter what bike you’re on, fill up the tank. Second is your stomach which brings us to the other two options. At the service station there is The Hungry Wombat Café which has plenty on offer, or just up the road is the pub with its carved wooden interior and selection of pub grub. I’ve always enjoyed the Café because there’s usually plenty of other motorcyclists to talk to, with everyone grinning from ear to ear from the wonder that is Tasmania. 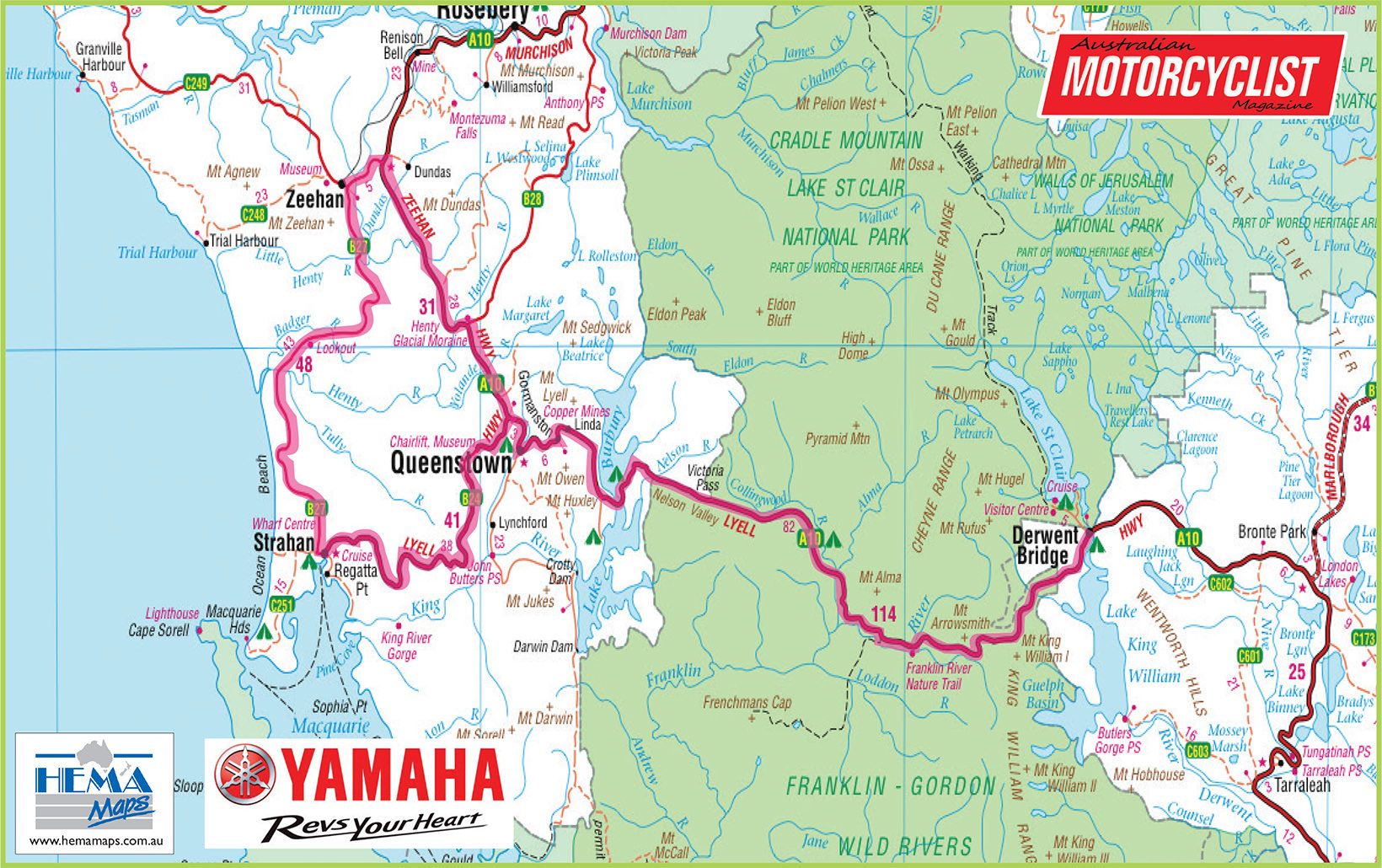 Starting out of Queenstown, head up north. Once you get up the top, turn left to head for Strahan, which is well signposted. You’ll still be on the Lyell Hwy and it’s effectively impossible to get lost on this route.

When you come into Strahan there’s a BP service station on your right. To head down into the village, turn left after the BP and then left again at the roundabout. To head for Zeehan, follow the Esplanade around the water and jump onto Henty Road which takes you all the way.

Once you’ve had a good look around Zeehan, get onto the Zeehan highway which takes you back to Queenstown where you need to head up the hill (99 Bends) and out to Derwent Bridge. Enjoy the stunning scenery along this part of the ride, which looks even better on your way back!

So, that’s it for the directions, pretty hard to get lost, hey, other than getting lost in the moment. LOL!