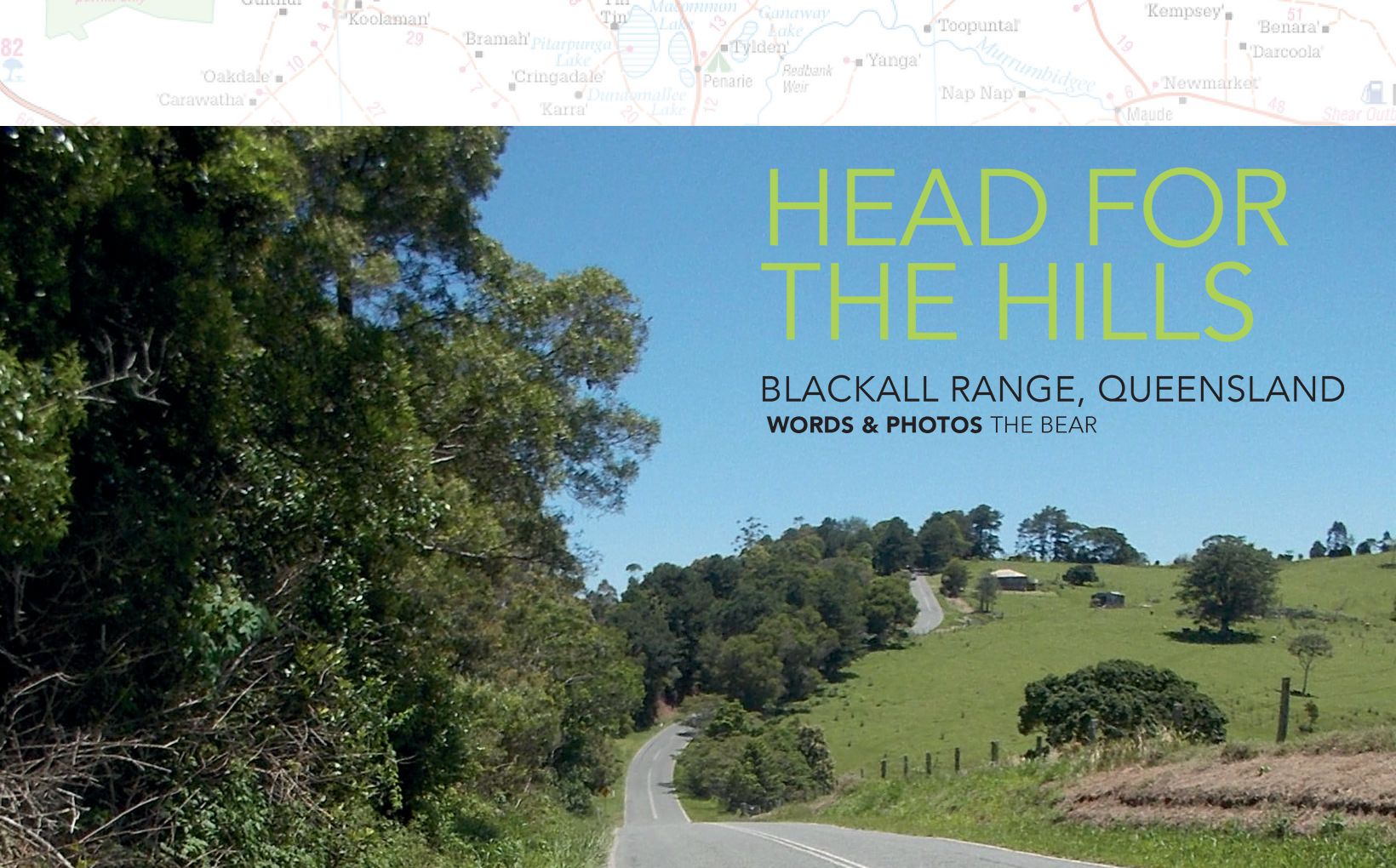 Much to the disgust of the locals (who were mostly blow-ins themselves) the Sunshine Coast is ?lling up with refugees from Victoria, NSW and even Tasmania. I seen ‘em meself! Indeed, several of them are friends of mine. What that does mean is that roads are becoming pretty crowded along the coast. As well, summer temperatures down there are not conducive to motorcycling unless you intend to participate in the sport of Near-Nude Motorcycling which takes you straight from home to hospital.

But despair not. Just a few kilometres inland lies the Blackall Range. Up to some 500 metres high, the range provides cool relief from the coastal frypan without dropping you into the ?re. In fact, the range offers many excellent motorcycle roads. I’ve selected a few of the more obvious ones for this map, but it’s probably true to say that any road you take up here is going to be a good one. There is some gravel, but it’s generally in good condition and shouldn’t worry even cruiser riders.

A word of warning. These roads are not a secret. On weekends and during holidays, the Blackall Range ?lls up with more motorcycles than FNQ has cane toads. Some places are so popular that you can’t get a parking space for your bike within comfortable walking distance. Avoid the range on these days and save your fun for the times when the roads are yours but for the few local commuters and delivery vans.

But let’s take a look at some of the towns and other places of interest in the range.

The main attraction here is the services station; if you haven’t ?lled up recently, do it here. The turnoff at the pub takes you onto the Mount Mee Road which eventually, after a terri?c ride, deposits you in Dayboro on the way to Brisbane.

A tourist town somewhat like Berrima or Mogo in New South Wales, Maleny nevertheless manages to be less arti?cial than either of those places. Despite all the tourist shops the atmosphere in the main street is more like that of a genuine working town, and it’s a pleasure to stop for a coffee. Mind you, the warning against weekend visits applies here, too. At other times there is plenty of room to park a bike and there are interesting things in the shops. On Sundays there’s a country market.

Just outside Maleny, on Mountain View Road which really does overlook mountains – in this case the Glass House Mountains – is King Ludwig’s German Restaurant and Bar. Opening times are limited, but the food, beer selection and service are excellent. Views from the terrace are spectacular. Call 07 5499 9377 to ?nd out if they’re open, and to book. Tell them The Bear sent you.

One of the smaller towns up on the range, Mapleton has the Mapleton Tavern with its wonderful views out along the Sunshine Coast from Maroochydore to Noosa. Fortunately you can’t hear or smell the traf?c down there…

Much like Maleny in its reliance on tourism, Montville has even more of a homey feel to it. The shops tend to sell genuine crafts rather than the standard Chinese-made tchotchkes that ?ll the establishments on the Gold and more often than not Sunshine Coasts. This is a good place to stop for a break and even overnight. On the Mapleton Road, Montville has two interesting restaurants which are both worth checking out. Altitude has excellent, if relatively expensive, food served in a silver service atmosphere while down the road, the hokey Relais pretends to be a French highway stop.

Down in the lowlands, Nambour has its own attractions but you just pass through it on your way to or from the range; it doesn’t really belong in this story. Except for one thing, and that’s The Basement bar, run by Your Mates Brewing Co. It’s downstairs at 35 Currie Street off Short Street.

Turn off the Bruce Freeway at the Big Pineapple and take the Kiel Mountain road to reach Palmwoods from the east, or the Razorback Road down from Montville. The town is not, strictly speaking, in the Blackall Range – it’s almost at sea level – but it holds one of the prime motorcycle destinations north of Brisbane.

Ricks Garage is a two-storey American-style burger bar which offers, among other things, a gigantic burger that’s almost a foot tall. You’ll see it in the photo with The Frog showing his appreciation. It was good, too, although it took both of us to eat it. Ricks is licensed and has a good range of both Scotch and beer; you can eat or drink inside or out and there are even a couple of the new Indians on display. On sunny weekends, I’m told, the entire town is full of bikes.

It’s the location of the annual music festival and it has a tourist of?ce tucked up against the base of its water tower, but otherwise Woodford is pretty much just another highway town. Please note that there is no petrol station in Woodford; the nearest one is in D’Aguilar just past the turnoff to the Mount Mee road.

Roads in the Blackall Range vary considerably in quality. In many places they offer the usual high-quality Queensland tar, while in others they would (and do – The Frog imports Fournales shock absorbers from France and tests them here) serve well as suspension test roads. The standard can change even on the same road, so I’ll just suggest that you look ahead. Let’s start from the north. 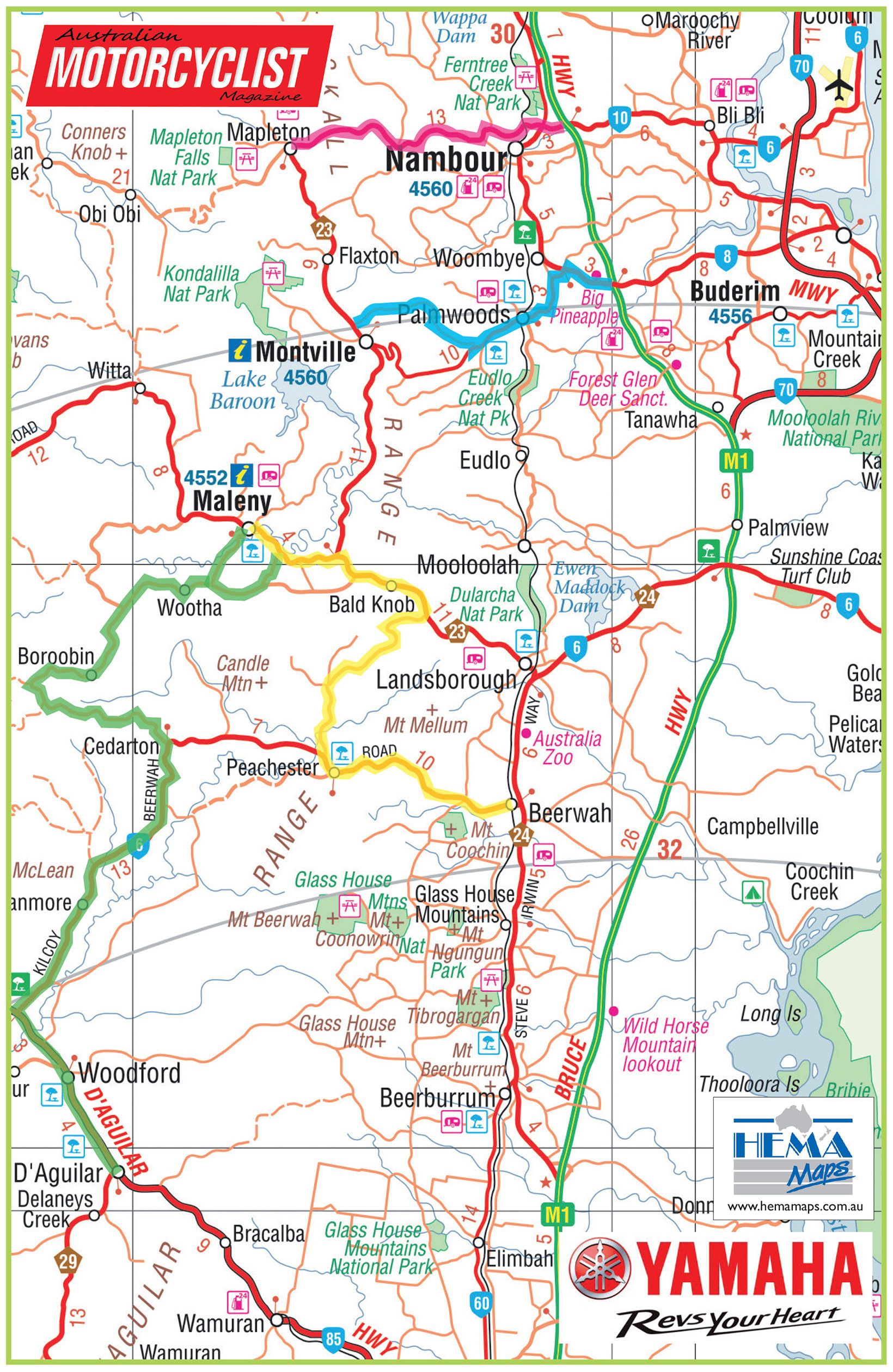 The Pink route takes you from the Bruce Highway up to Mapleton, by way of Nambour. It isn’t long after you’ve left Nambour behind before you ?nd yourself out in the country. There is a bit of traf?c on this road – but it’s also a terri?c run. There are even hairpins. As you get closer to Mapleton the road becomes steeper and you ride up through forest. You’ll know you’ve reached the top when you see the Mapleton Tavern in front of you!

The road begins in Montville as the Razorback Road, and I doubt that there’s a much better motorcycle road anywhere in Australia. It is a bit bumpy, but that just lets you show off your skill! Halfway down it becomes the Hunch Road, and then you join the Palmwoods Montville Road to take you into town and past Ricks Garage. The Woombye Palmwoods Road will take you out to the Bruce Highway and the Big Pineapple. The best bit is Razorback, but the Hunchy Road and even the Palmwoods Montville Road are also good riding.

A variety of roads will take you from Maleny to the main roads of the coast, but my favourite is the Landsborough Maleny Road to just beyond Bald Knob and then the Bald Knob Road down to Peachester. From here it’s a very pleasant run down to Beerwah on the Steve Irwin Way, which connects to the Bruce Highway both in the north and in the south. All good and beautiful routes, but the Bald Knob Road takes my prize – except for some potholes which it’s really time to ? x; is anyone listening?

You can take either Coral Street or Bunya Street from Maleny at the start of this run. They meet at Maleny Botanic Gardens and Bird World after the latter becomes Mountain View Road. King Ludwig’s Restaurant is along here, on your left. The roads join up to form Maleny Stanley River Road and after a terri?c run through Wootha and Boroobin (there’s

not much at either place) take you down to a junction with the Kilcoy Beerwah Road. This eventually meets the D’Aguilar Highway just short of Woodford. Follow that to D’Aguilar and you have the choice of taking the wonderful Mount Mee Road or the highway to Brisbane.