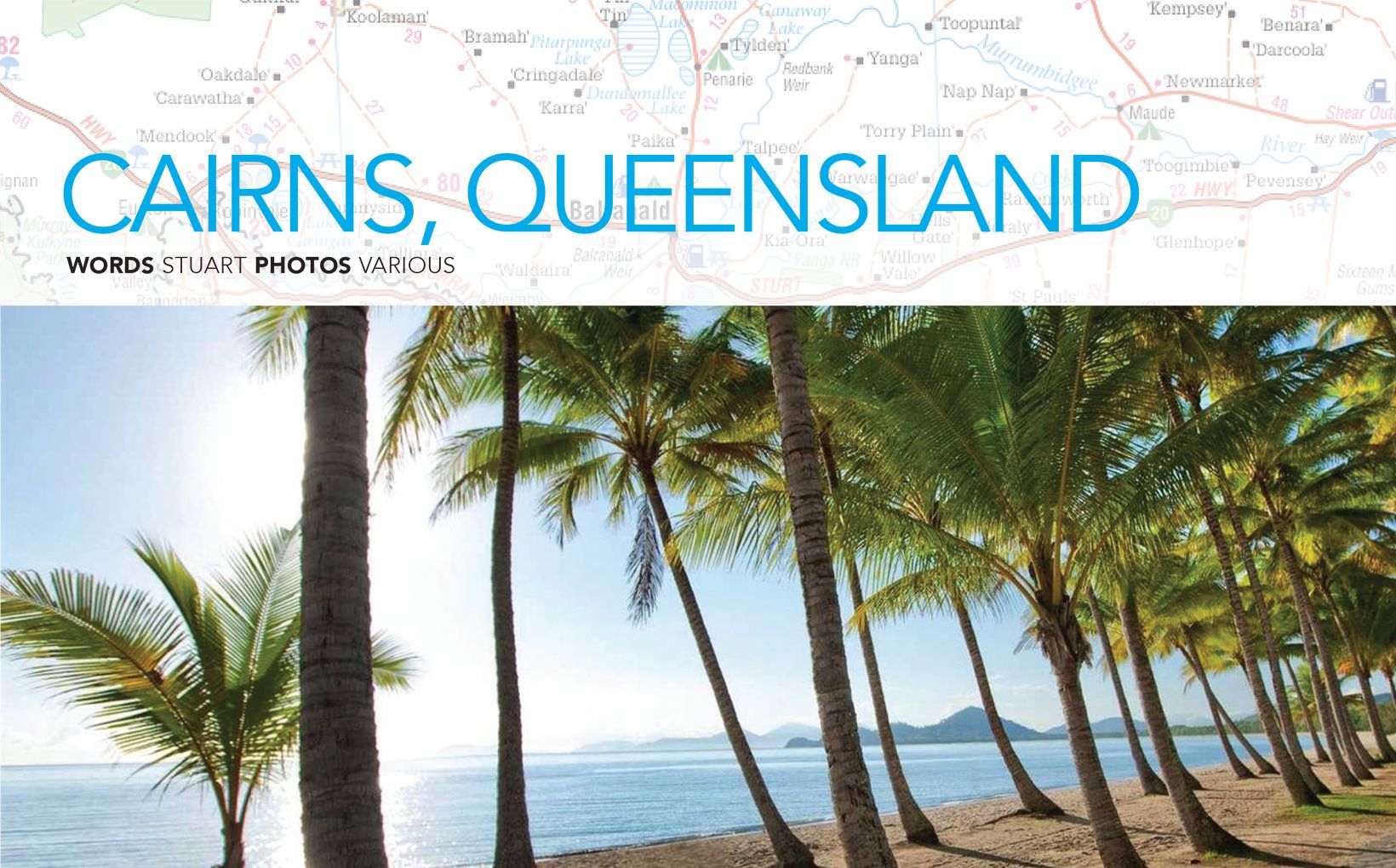 We head north this month to the Cairns region for a nice little loop with the option to continue further north up towards Port Douglas to, possibly, make the ride a figure eight. Since Cyclone Debbie the northern regions of Queensland need to be shown some love in helping businesses get back on their feet and who but the most awesome people in the world to do that – Australian motorcyclists! As you will know the major area that got hit was the Mackay region. If you’re coming from anywhere other than west of Cairns, you’ll be able to spend a bit of time and money in the area. Once you’ve made it to Cairns, you can rest up before away we go for this month’s ride…

The major city among the humidity of the far north Queensland region. You can anything and everything you would want, there are also a number of motorcycle shops and mechanics if you need repairs or parts.

A small sugar growing town which has sort of been subsumed by the outer reaches of Cairns. For this ride it’s mainly a landmark to let you know you need to turn right onto Gillies Range Road.

Mainly a landmark for this ride once again, so you’ll know that it’s not long until the real fun begins!

This tranquil and picturesque village is situated 720 metres above sea level and has beautiful natural attractions: crater lakes, waterfalls and World Heritage rain forest including Curtain Fig National Park where you can go and see the Curtain Fig Tree if you’ve got time. A terri?c place for sel?es.

Pretty much anything and everything is also available at Atherton. The region itself has many waterfalls you can go and see but I think the major attraction is the Crystal Caves where you can do walks under the Earth to see the amazing beauty of thousands of years of underground ‘life’.

Most things are available in Mareeba, but for this route it is a guide to turn right to continue the main route, or to continue north for the optional route.

A couple of tourist attractions at Kuranda are Birdworld or for some art, visit Emu Ridge Gallery. If you love to ride motorcycles, not far out of Kuranda on the way back down to Cairns are some more great twisties!

Make sure you stop at the National Hotel for a refreshment and remember not far out of town you need to turn right.

A holidaymakers paradise, Port Douglas is heavily populated with tourists, but the town is worth checking out if you’ve got time.

A unique, quiet and relaxing village by the sea where centuries old “paperbark” Melaleuca trees line the casual esplanade, you’d almost think you’re on a tropical island somewhere. Palm Cove is a tropical paradise which numerous world class and award winning beach resorts, restaurants and spas. So if I were you I would say to hell with riding back to Cairns just yet and set up in Palm Cove. Or is that Alana telling me that?!

Almost the same as Gordonvale where you’re back to ‘suburbia’ and the outer reaches of Cairns itself. This is also where the main route joins back in to head back into Cairns. 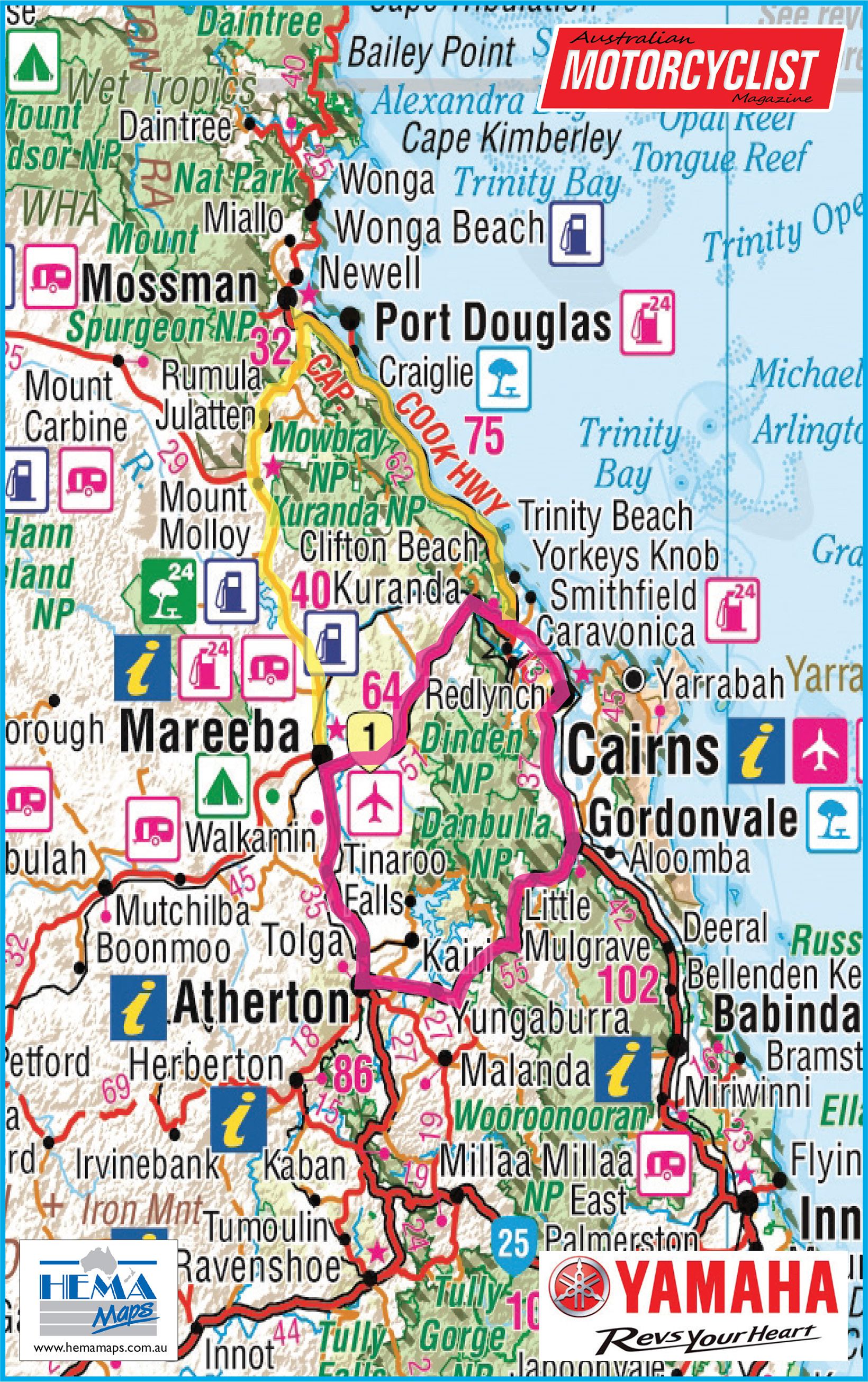 Obviously, you can do this route either way but we headed south. Jump onto the Bruce Highway and head for Gordonvale where you need to turn right onto Gillies Range Road. Enjoy the beautiful twisty corners which take you over to Yungaburra, continuing on over to Atherton.

Jump onto Kennedy Highway and head north which takes you up to Mareeba where you turn right onto… Kennedy Highway! Once you get over to Kuranda there’s a nice little section of corners to enjoy before heading back into Cairns.

Fuel: Cairns, Atherton, Mareeba, Kuranda. However if you ?ll up in Cairns just about all bikes should make it around this loop.

If the weather is nice and you’re feeling great why not continue on with the optional route we have included.

Once you get to the right turn at Mareeba, don’t take it but continue heading north on Byrnes Street which turns into Mulligan Highway. Follow this all the way up to Mount Molloy where you need to turn right about 1-1.5km just out of town onto Mossman Mount Molloy Road. There’s a great little twisty section just before arriving in Shannonvale. Continue on until the T-intersection with the Captain Cook Highway where you want to turn right and follow the amazing Captain Cook Highway south along the coastline to Smith?eld before following the signs back to Cairns.