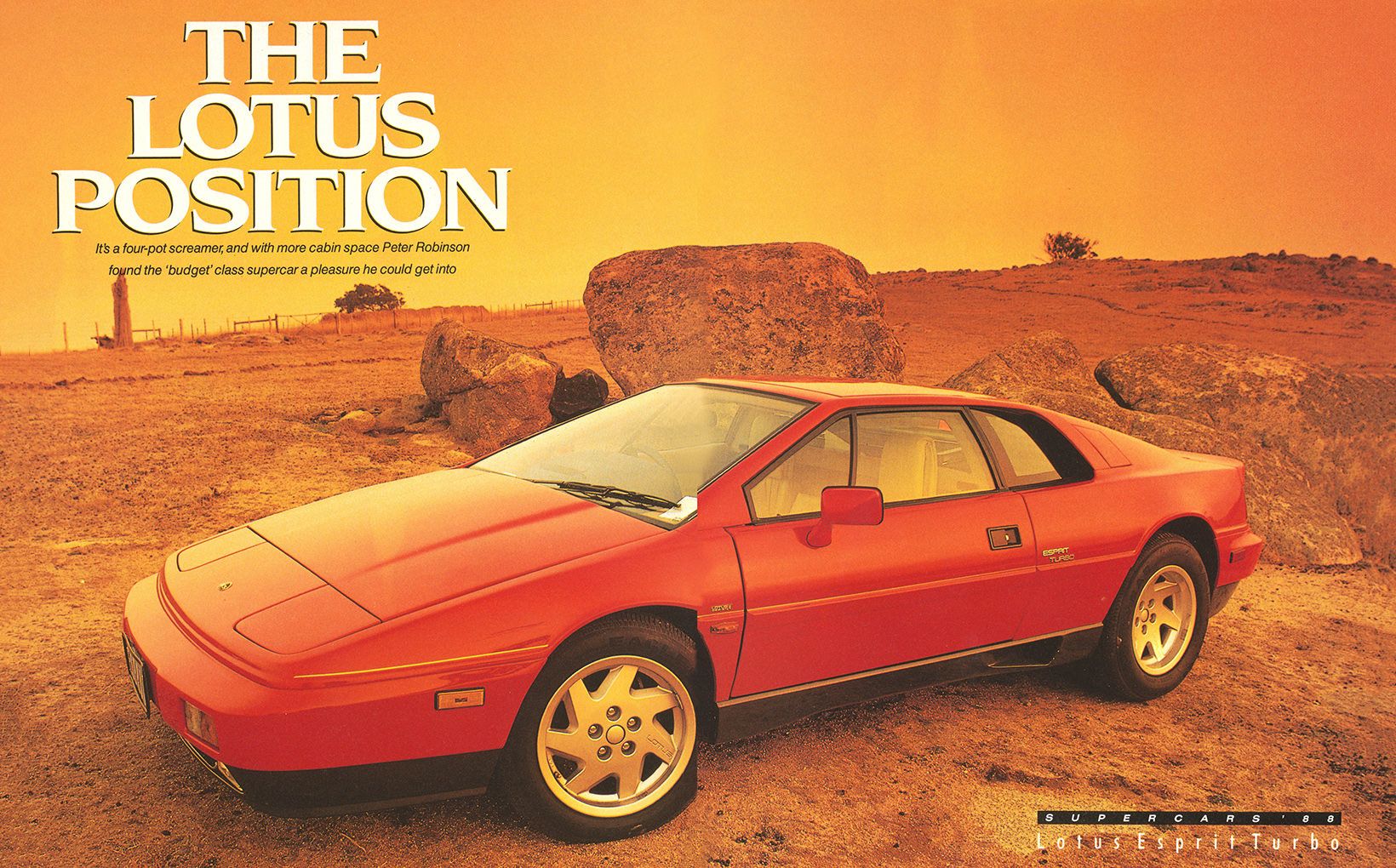 Andrew told me later he could hear the Lotus coming, winding out through the gears, accelerating hard up the hill towards his camera, hidden around the sweeping, third gear, left hander. Twice he heard the exhaust note change, the induction rasp giving way to turbo whistle and crackle in that brief moment on the overrun before power was applied in a higher gear. He knew, then, the Esprit was in third gear, so he knew it was going to enter the corner very, very fast.

We had doubted the speedo's accuracy all day. Surely even this car couldn't be going as fast as the small white needle indicated. His tripod on the verge of the road, Andrew could see a Valiant dawdling down the hill in the centre of the road. The driver stared ahead completely unaware of the cameraman who now waved his arms in warning. Finally, at the very instant the red Lotus burst into view, the Valiant driver noticed Andrew and moved further to the right. Was it instinct that made him veer back to the left so quickly? Or simply the onset of double lines. I don't care, at least he had started the movement when the Esprit wanted its rightful slice of road. 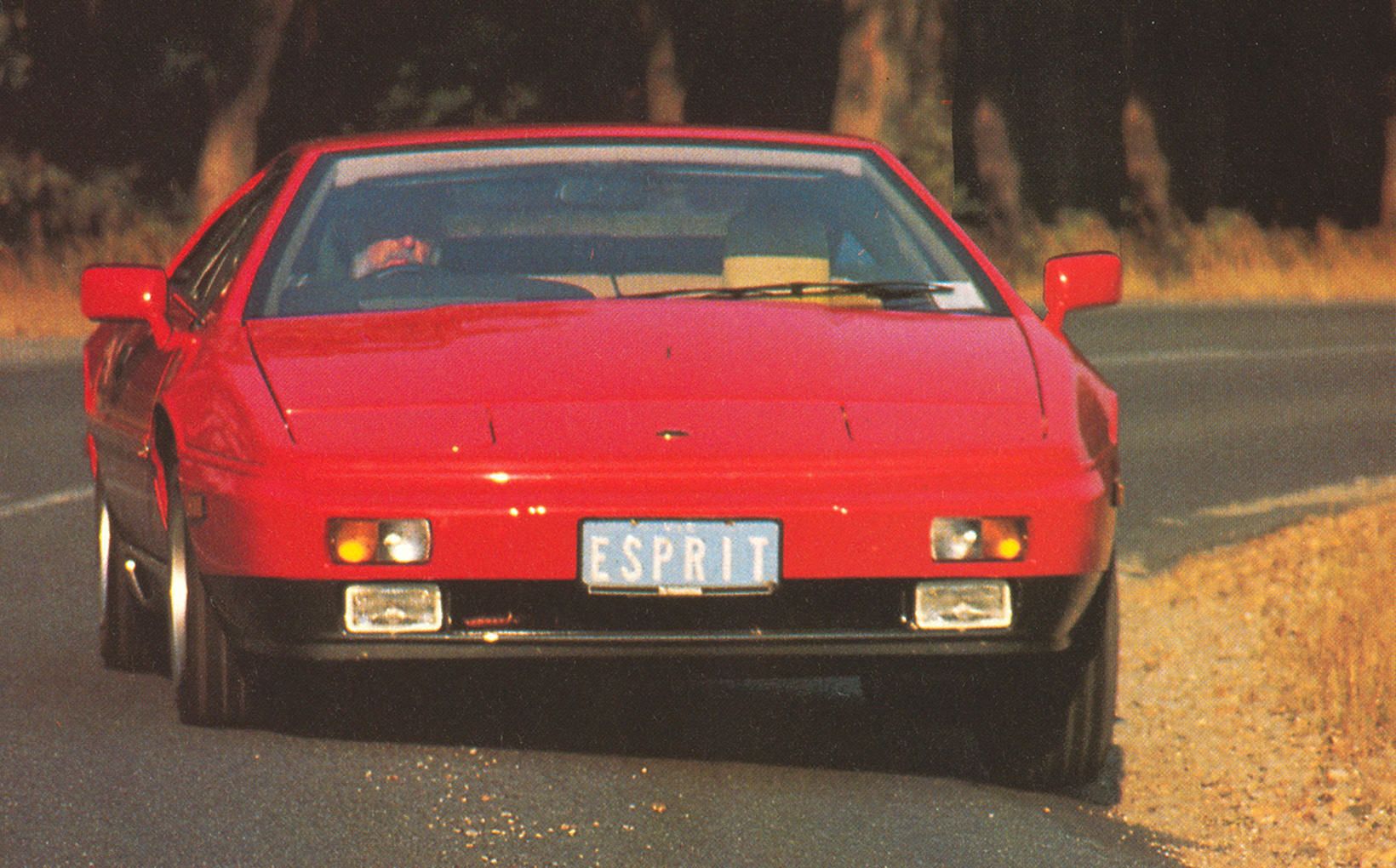 I'd rushed at the corner, changing up at 7000 rpm, the ultimate reading on a tachometer that lacks any visual warning segment, though there is a limiter where 7200 rpm would be if the graduations read any higher. First to second, second to third, I was aware for the first time of the change in exhaust note, be- cause the window was down. I pressed hard on the accelerator, knowing the engine would almost get to the cutout just before the corner.

Four cylinders may not emit the classic roar of an Italian eight or 12 but, by God, the little 2.2 litre four in this car gives abundant acceleration, sufficient to keep any 328GTS or 911 honest. The turbo, smooth and with less lag than we can remember from any other boosted engine, begins to build at 2500 rpm. It reaches peak boost of 0.6 bar at 3500 rpm and the revs rush headlong to 6000 rpm, the point where the peak power· of 160 kW is developed, and spins willingly to 7000 rpm. 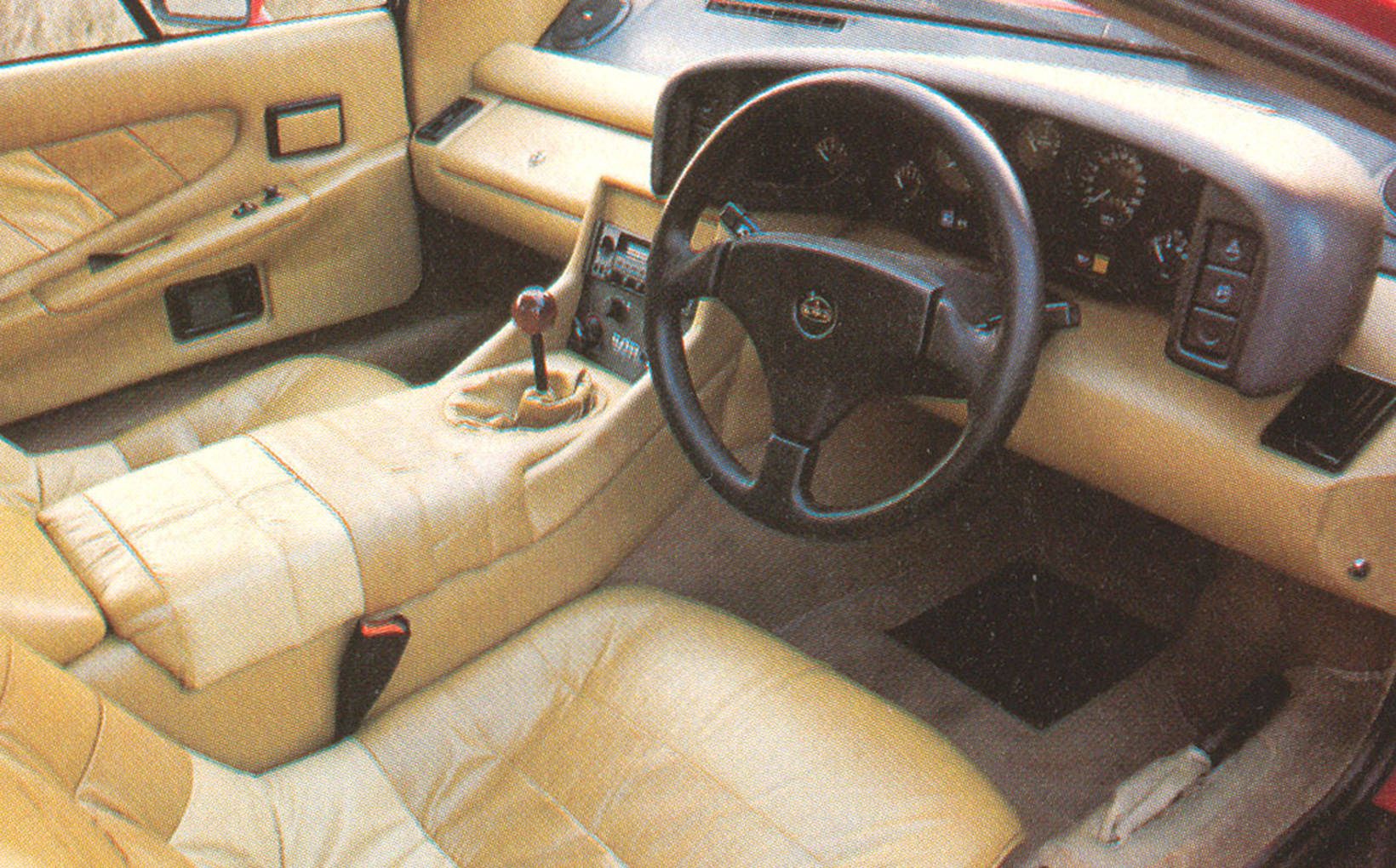 Interior room is slightly larger and surprisingly comfortable by Lotus standards. That heavily bolstered leather seat finally has a backrest adjustment, but tall drivers will remain in the knees up position

The corner I knew. Just lift off momentarily, no need to brush the brake pedal before getting back on the power, the rear end pinned to the road, the steering so communicative it begins to get heavy. The Esprit soared through, the Goodyear NCTs 235/60 VR15s at the rear and 195/60VR15s at the front providing tremendous lateral roadholding.

But you don't expect to be confronted by a slow-moving Valiant occupying your side of the road. The Esprit's moment of truth had arrived. No time for a down change. Besides, we were travelling too quickly. Remember what they've always said about midengined cars and sudden braking in a corner, no it had to be the steering and the Esprit's inherent dynamic qualities which would deliver us from this situation. 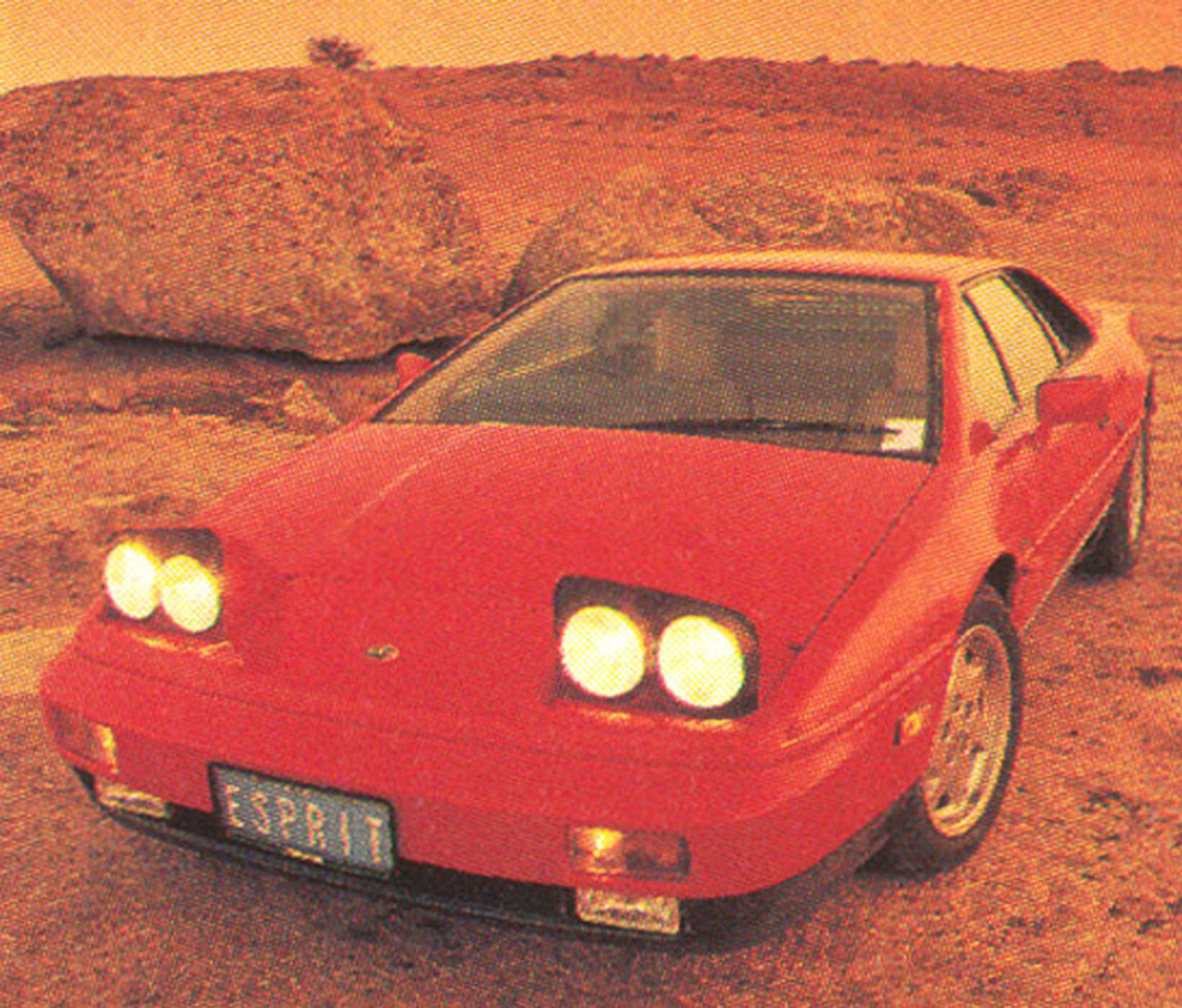 Mid-engined cars are normally agile. Up to their limits they remain friendly, beyond that they can become challenging. The gap to the left was small. Would the Lotus be narrow enough to fit? A snatch of left lock, in reality barely an eighth of a turn so sharp is the gearing. The rapid change of direction induced little body roll, the tyres clung like limpets, even as the two on the left whacked the gravel.

The back twitched abruptly, yet the Esprit did no more than flick momentarily sideways before finding grip again. Was it the front that started to lose traction? Too much right lock, perhaps, as all four wheels returned to the blacktop and security. We'd missed the Valiant but how close it was. Now we could revert to the superb, unmatched flow that allows this car to devour roads. Andrew and I were impressed, the more so when we did our calculations and discovered the speedometer was accurate, even at 150 km/h! 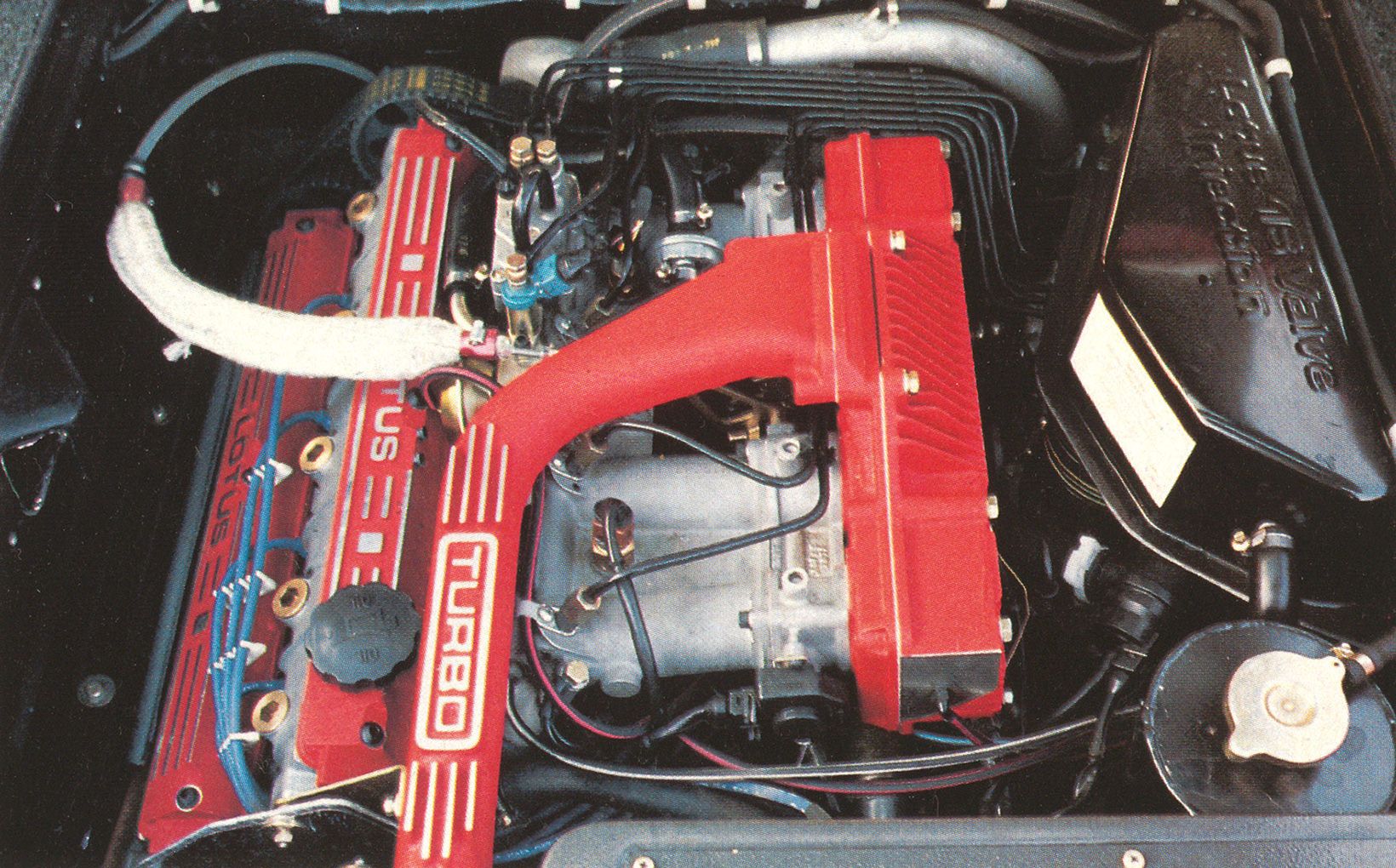 The new Esprit has been just 15 months from concept approval to production. It reflects the new-found financial security that GM ownership has given the chronically under-capitalised car maker which still suffers from its kitcar image. The '88 model Esprit, now sold by Jim Smith in Australia, centres around the new body that replaces the Giugiaro-designed foldedpaper styling originally shown at the Turin motor show in 1972, and which went into production in 1976. The brief for Lotus chief designer Peter Stevens was to update the appearance without moving any of the car's hard points - the key dimensions to which the newly developed vacuumassisted resin injection (VARI) body is attached to the backbone chassis. VARI was first used on the Excel (which goes on sale in Australia late this year), but is now manufactured more quickly and with greater consistency of quality and strength. To retain the excellent proportions of the old Esprit, Stevens kept the same A-pillar angle and managed to soften the car's appearance. The new model is dominated by surface treatment, rather than by lines. Every exterior panel and window has been changed, yet the car still has the distinctive profile of the Esprit. That nose treatment, however, is depressingly Japanese and the tail lights look straight from a Toyota. 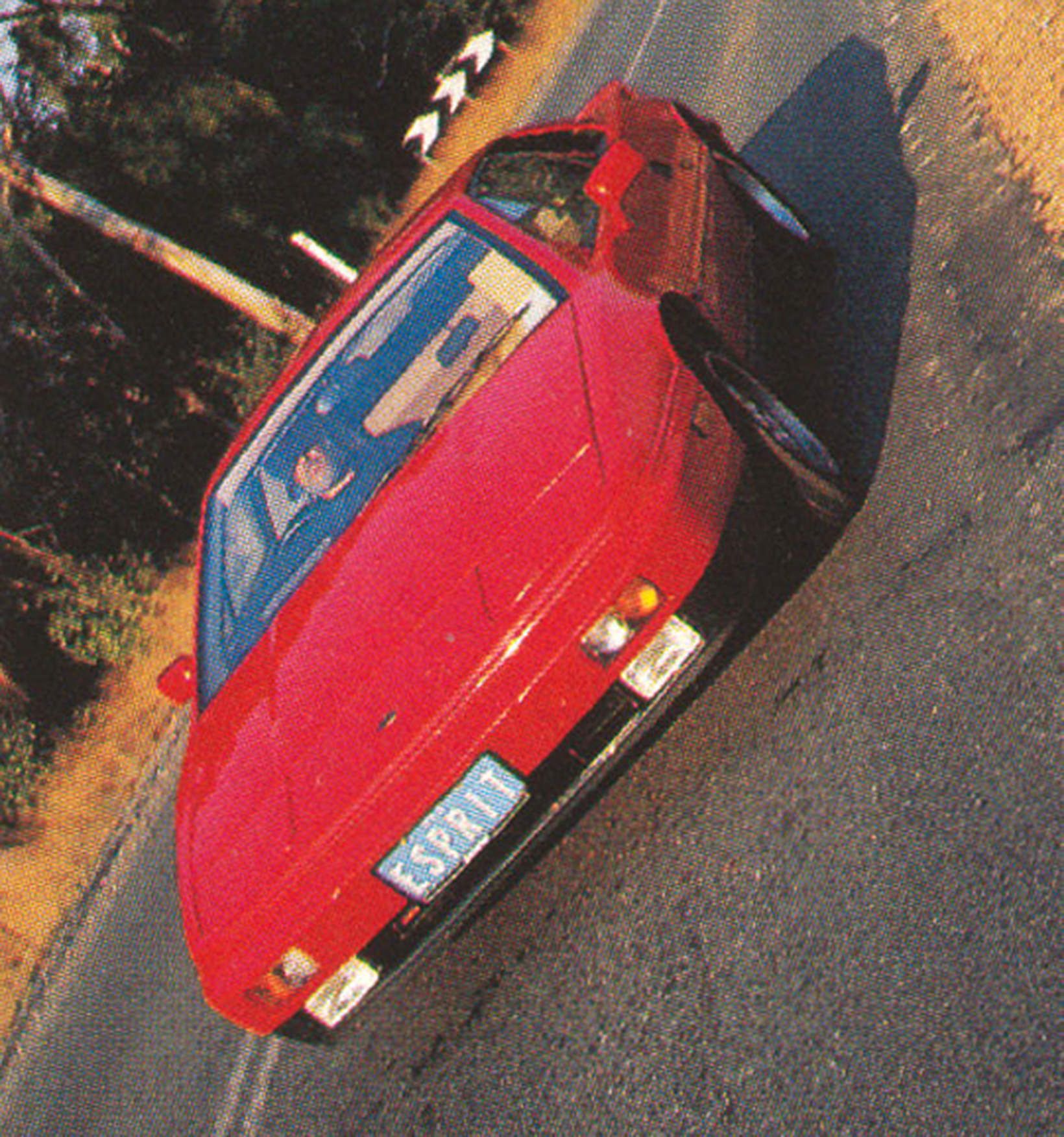 Lotus concedes the old Esprit's drag coefficient was a poor 0.40, while the new model, in unleaded Federalised form, has a drag factor of 0.345. The British version is even lower.

Lotus quotes the previous power figures for the new model yet the test car's performance was vastly superior to the old model we drove for the May '87 issue. This despite a 100kg weight increase, a small penalty when you realise that once body and chassis are bolted together the structure has almost double the torsional stiffness of the basic backbone chassis. Lotus's search for improved quality is obvious and the car feels much better screwed together than its predecessor.

Apart from the styling and construction method, little has changed. American and Australian Esprits retain the Citroen SM gearbox made by Colotti. Cars destined for Britain now use a Renault gearbox and their brakes have been moved outboard. 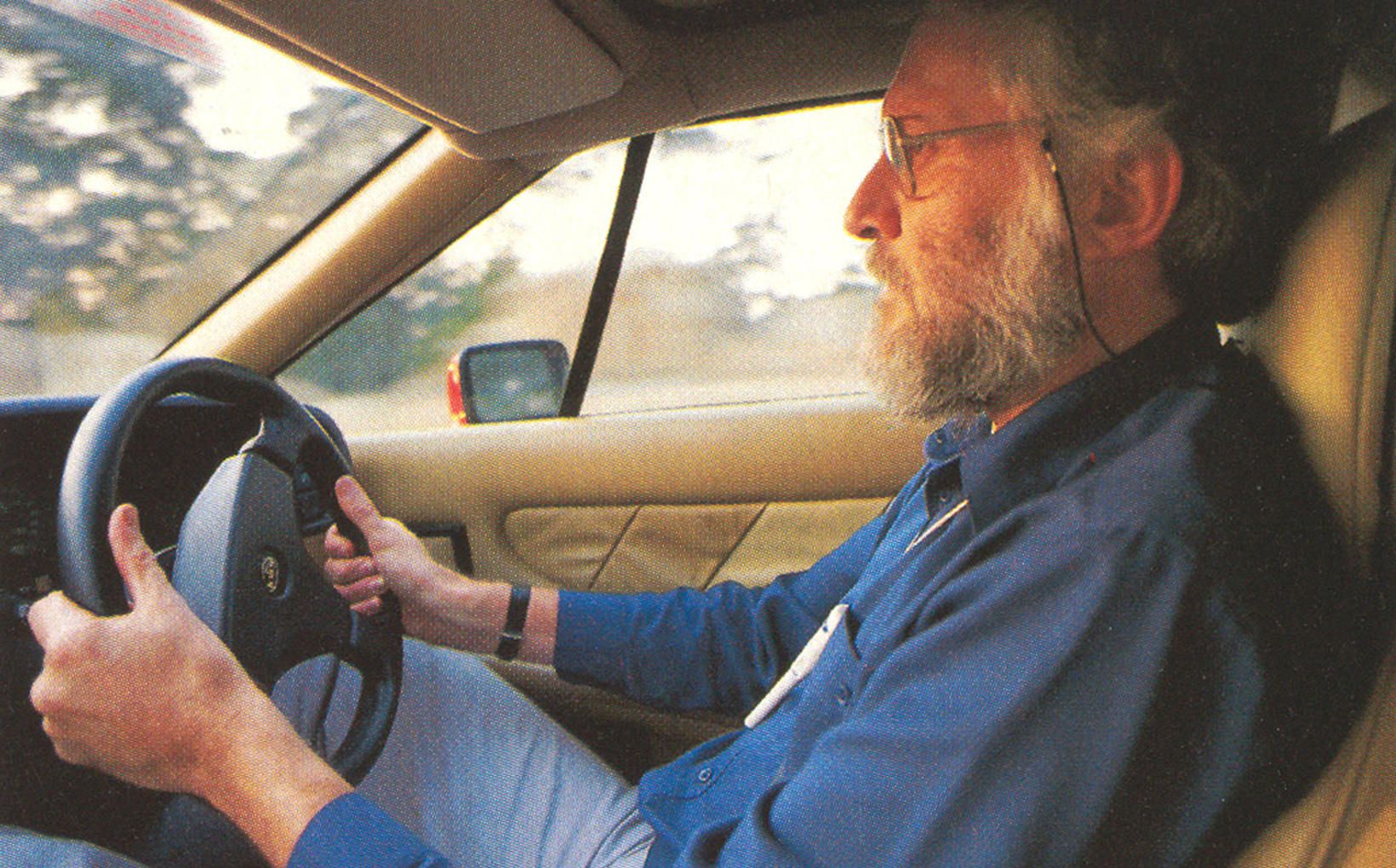 Author PR after his heart rate had come down from peak revs. Steering and handling he says, gets better as the car goes faster. But our rough roads were not to the car's liking.

Since Maserati killed the Merak/Bora there hasn't been a mid-engined exotic with a roomy interior. And the snug fitting Esprit isn't going to change that basic rule. There is, though, more space than the old model. The cabin has 20 mm more headroom, 15 mm more legroom and the seats are 25 mm wider. Every mm helps in a car like the Esprit, as any owner will testify.

The doors open narrowly because Australia's unique door intrusion bars demand added support at the hinges. Entry and exit isn't easy but once you slip down into the rich, leather-trimmed interior and sink into the heavily bolstered bucket seat (that finally has backrest adjustment) you'll find this is a surprisingly comfortable place. Tall drivers will sit with knees high on either side of the small three-spoke steering wheel that doesn't quite sit square on to the driver. 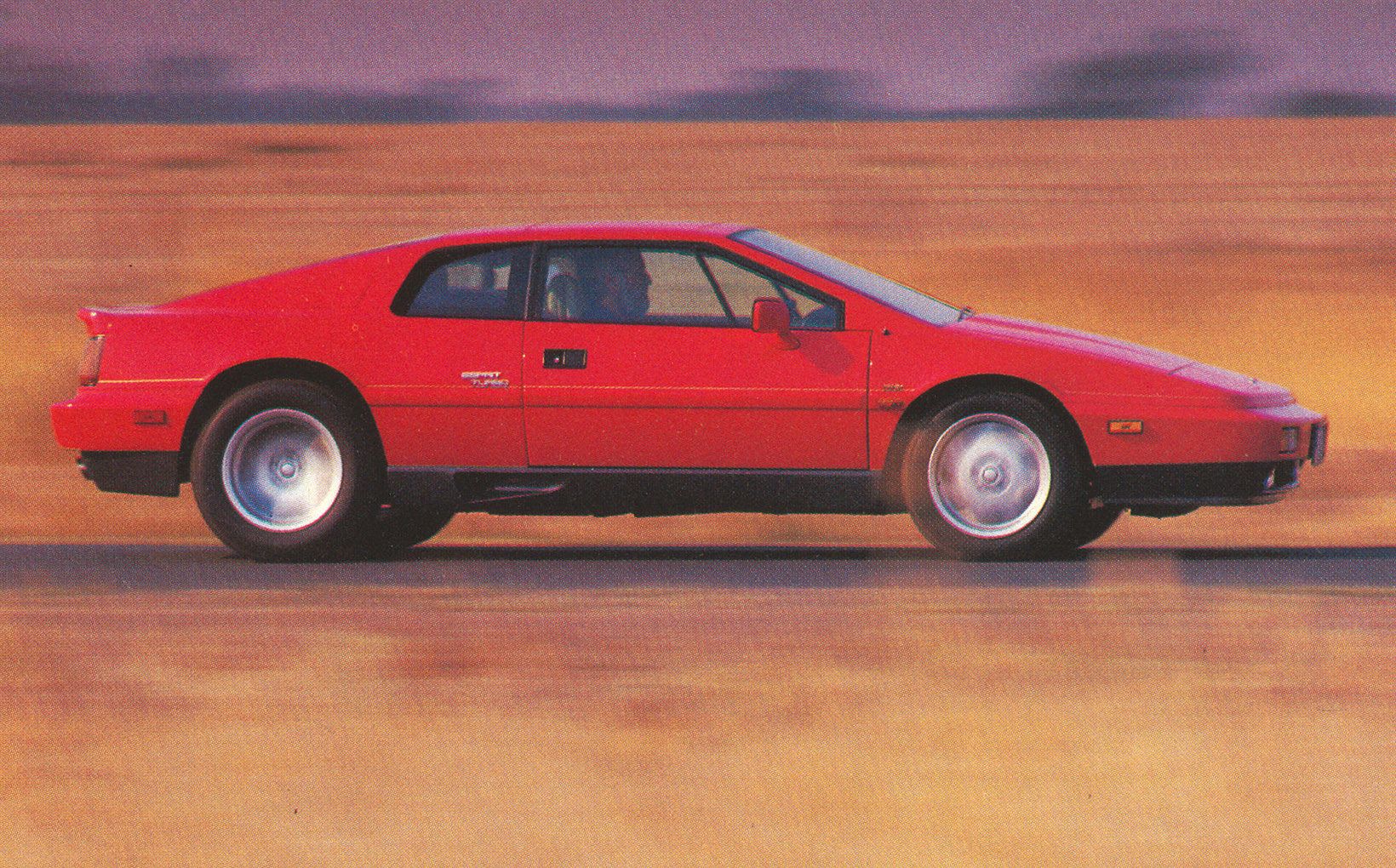 The gear lever has long, rather notchy movements and is especially difficult in the downward change from fifth to fourth. The basic layout of the dashboard is unchanged, though the instrument binnacle is smaller and VDO is now responsible for the gauges. The fuel gauge and the top left-hand edge of the tachometer are both hidden from view by the thick rim of the steering wheel. As with virtually all mid-engined twoseaters, visibility is poor over the shoulders, though it is better now than it was. Wind noise has been dramatically reduced and two people can now hold a normal conversation at very high speeds without having to shout.

You will know by now that the Esprit has devastating performance. Not quite enough, in unleaded form, to match the British version which Jim Smith says has another 9-1 OkW. Autocar magazine found the new car would cover the standing 400m in just 13.7 seconds and reach a genuine 240 km/h. Lotus claims 14.4s for the 400m for the Australian car and a top speed which matches the Pommy car. We don't doubt the assertion. 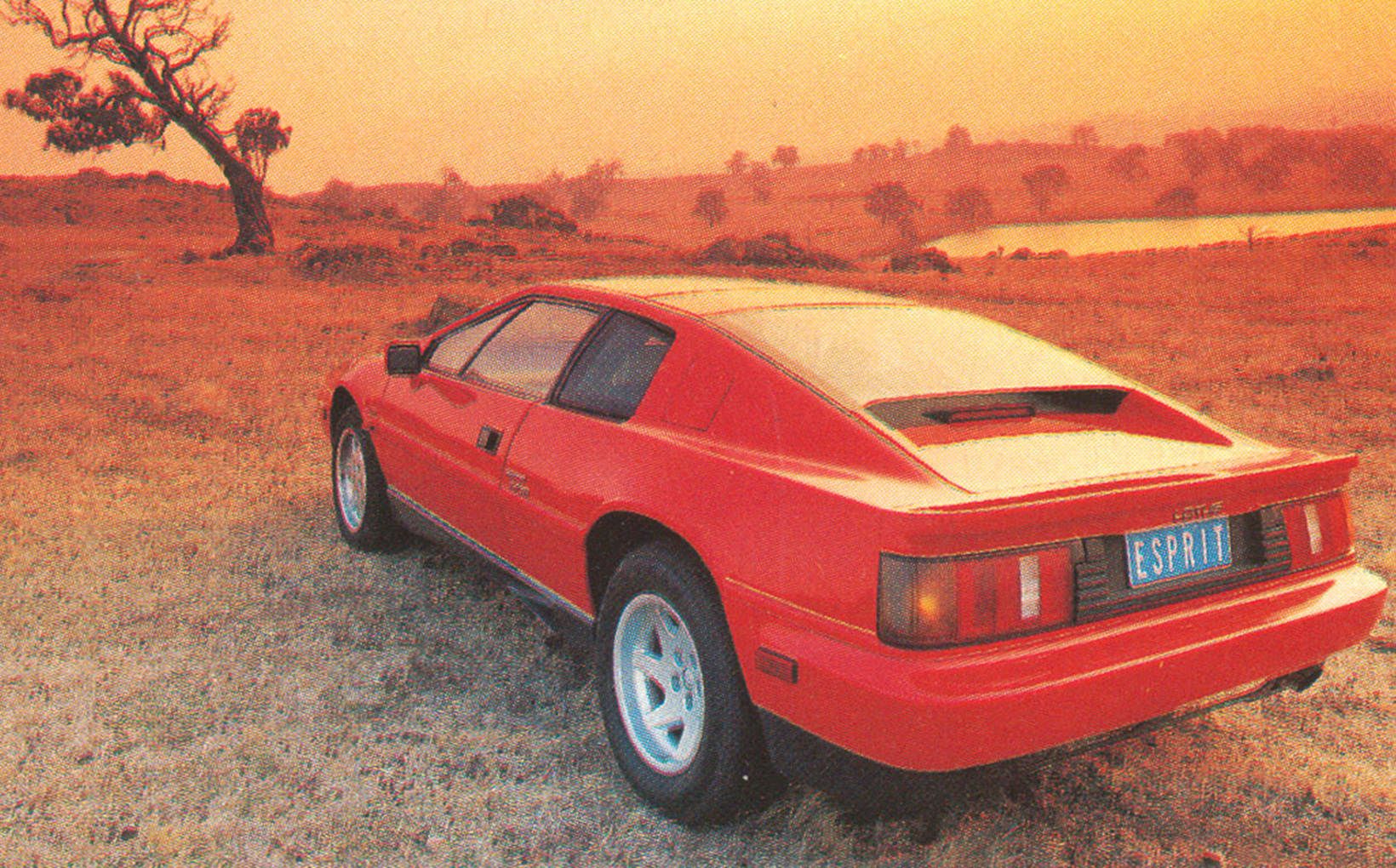 As $176,000 and abut half the cost of most supercars, the Lotus is effectively a budget sporty. The ne model has more power, better visibility and much less road noise.

What these claims can't tell you is the Esprit's wonderfully sensitive steering. Yes, it is heavy and a real chore at parking speeds, but once on the move and away from tight corners its intimacy with the driver is supreme without ever being nervous. This car gets better the faster it goes, the engine asserting its desire to spin out to 7000 rpm. On smooth roads this car's subtle energy, its decisive yet discreet manners are a joy. Pitted and rough Australian bitumen roads induce an occasional bottoming and a thump through the suspension that upset the car's poise and have the driver thankful for the new construction quality. Given half a chance on bet- ter roads and the Esprit can be searingly quick, a $176,000 indulgence for those who place driving pleasure above all other priorities.