LOTUS recently ended production of its Elise, Exige and Evora models, which contributed to almost half of all vehicles produced during the British sportscar marque’s colourful 73-year history.

The trio was photographed, along with many of the team members responsible for the assembly, design, engineering and sales of the brand’s three E-model mainstays, in Hethel, England, where the firm has been headquartered – on what was once a decommissioned airbase – since 1966.

The trio’s assembly lines, which were installed in 2000, are being replaced with modern production lines to support production of the all-new Emira – Lotus’ last petrol-powered production car. 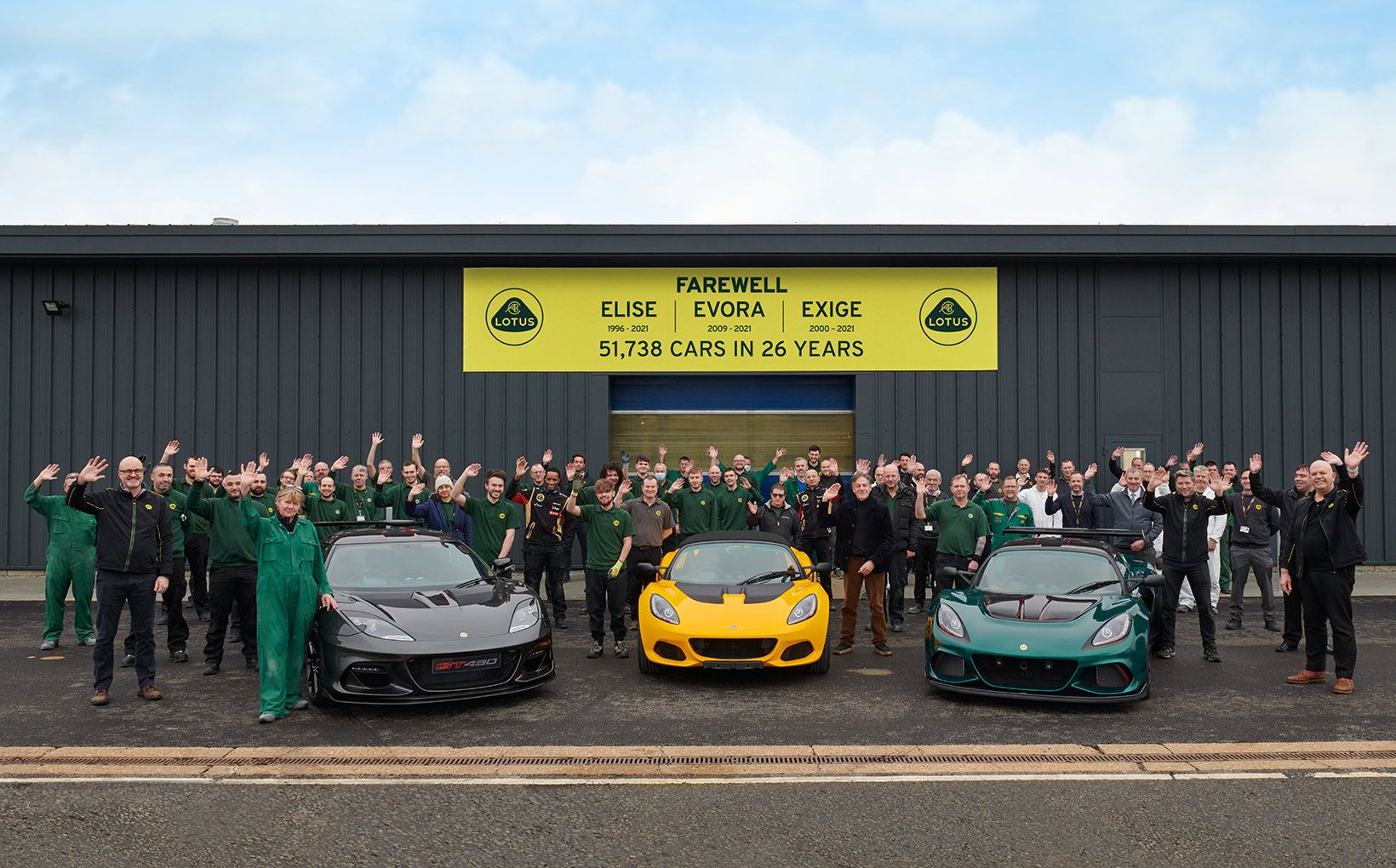 It is said when the firm’s legendary founder Colin Chapman, who died at the age of 54 in 1982, was looking for a new location for the company in the mid-‘60s, we took a map of the UK and drew a circle with a radius of 100 miles from the centre of London. Hethel was on the very edge.

Lotus’ facilities, which includes a boomerang-shaped 3.5-kilometre-long test track, have evolved substantially from those days, of course, but the company flirted with bankruptcy in the early to mid-‘80s, after which the ownership of the company changed hands between General Motors, a Luxembourg-based consortium, Proton, and, most recently, Geely, which took charge in 2017.

The Hethel factory has produced a slew of memorable cars, including the Europa, Elite, Eclat, the iconic Giugaro-penned Lotus Esprit, which become a household name after it starred in two Bond movies: The Spy Who Loved Me, For Your Eyes Only and the 1989 blockbuster Pretty Woman (notably produced in Turbo, Turbo SE and, later, V8 guises), Excel and the second-gen Elan. 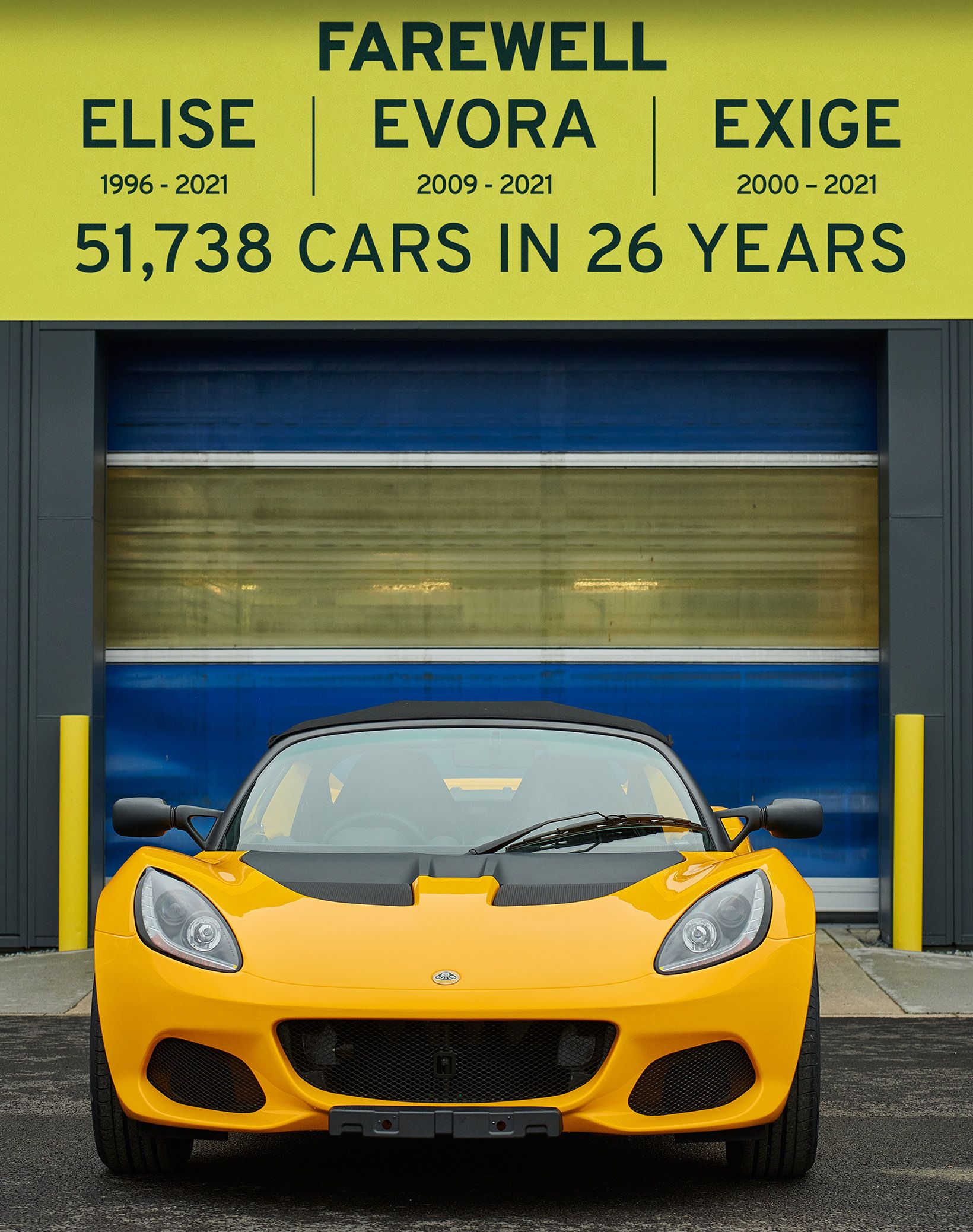 The Elise was largely responsible for the resurgence of the Lotus brand in 1996.

However, the brand had a resurgence when it introduced the Elise in September 1996. The pint-sized mid-engined, rear-wheel-drive roadster, with a fibreglass body mounted on a bonded aluminium chassis was a featherweight with a minimalist construction and marked a stunning return to Chapman’s ethos of “Simplify, then add lightness”.

Lotus said last year that since production of the Elise began in the mid-’90s, it had sold 35,124 examples of the elemental sportscar (Series 1, 2 and 3, including a slew of special editions, the fastest of which were powered by supercharged Toyota four-cylinder petrol engines). 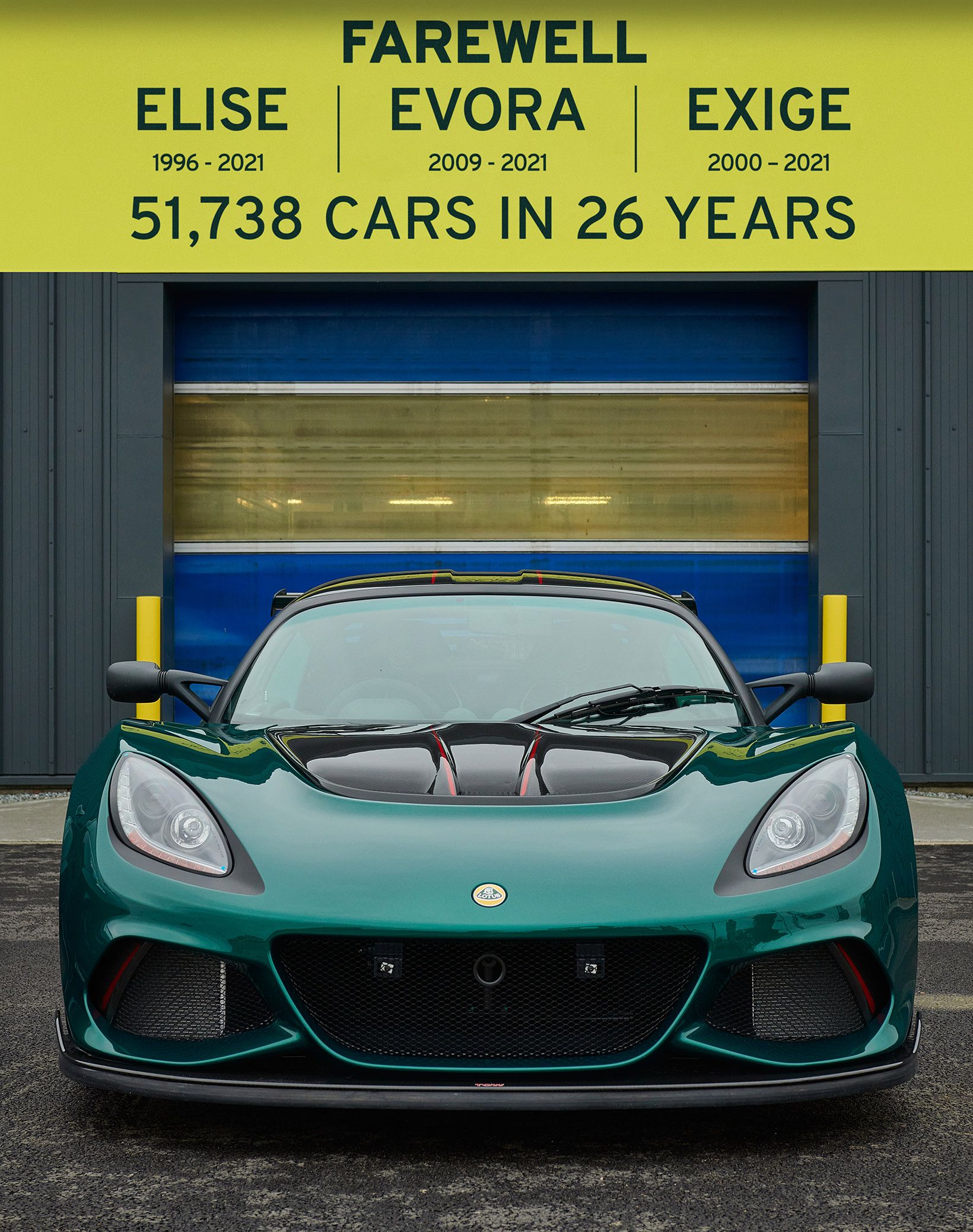 The Exige – a hard top version of the Elise – was introduced in 2000 and garnered a total of 10,497 sales. Lotus also produced three series of the Exige, the most potent derivatives of which featured a supercharged 3.5-litre V6 Toyota engine and a host of track-oriented enhancements.

Meanwhile, only 6117 units of the Evora, of which production began in 2011, were sold worldwide. Although provocatively styled, the Evora was a 2+2 seat mid-engined coupe that was meant to a practical road car, which meant it didn’t necessarily appeal to Lotus’s traditional clientele. It was offered in 3.5-litre V6 (later supercharged) guise and, notably, also available as a six-speed auto.

Lotus was famously involved in the development of cars such as the Lotus Cortina, the BMW M5-thumping Lotus Carlton, and provided chassis, suspension and engine turning for many brands. 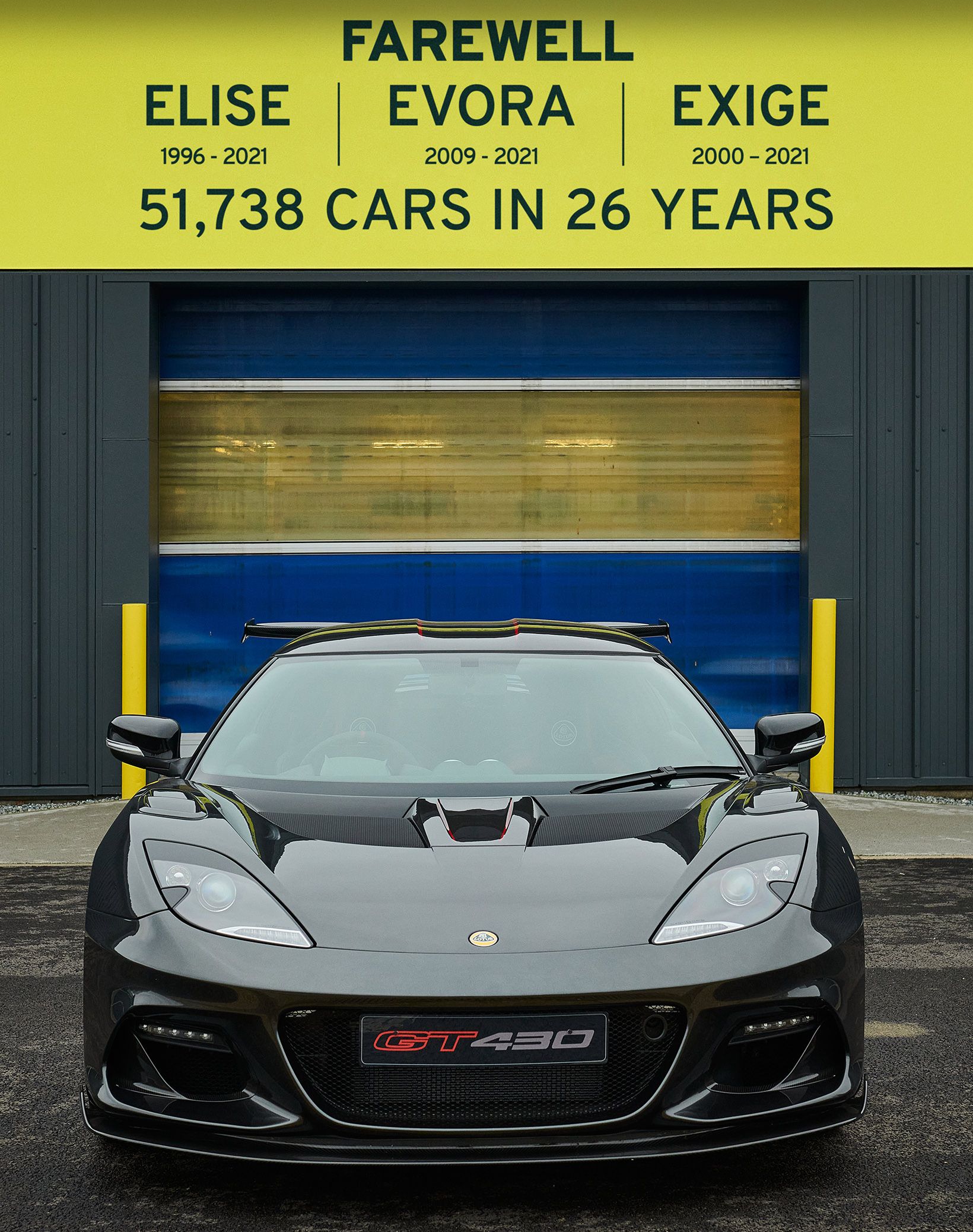 The British marque also produced 9715 vehicles for third-party clients such as GM and Tesla. These included 7200 Opel Speedsters and Vauxhall VX220s (from 2000 to 2005) and 2515 Tesla Roadsters between 2007 and 2012 – including the example that Elon Musk sent into space!

Production of the Emira will commence in Q2 this year after the new model’s prototype- and test phases have been completed. The new production line will be capable of churning out as many as 5000 examples of the Emira annually, based on a single-shift pattern. 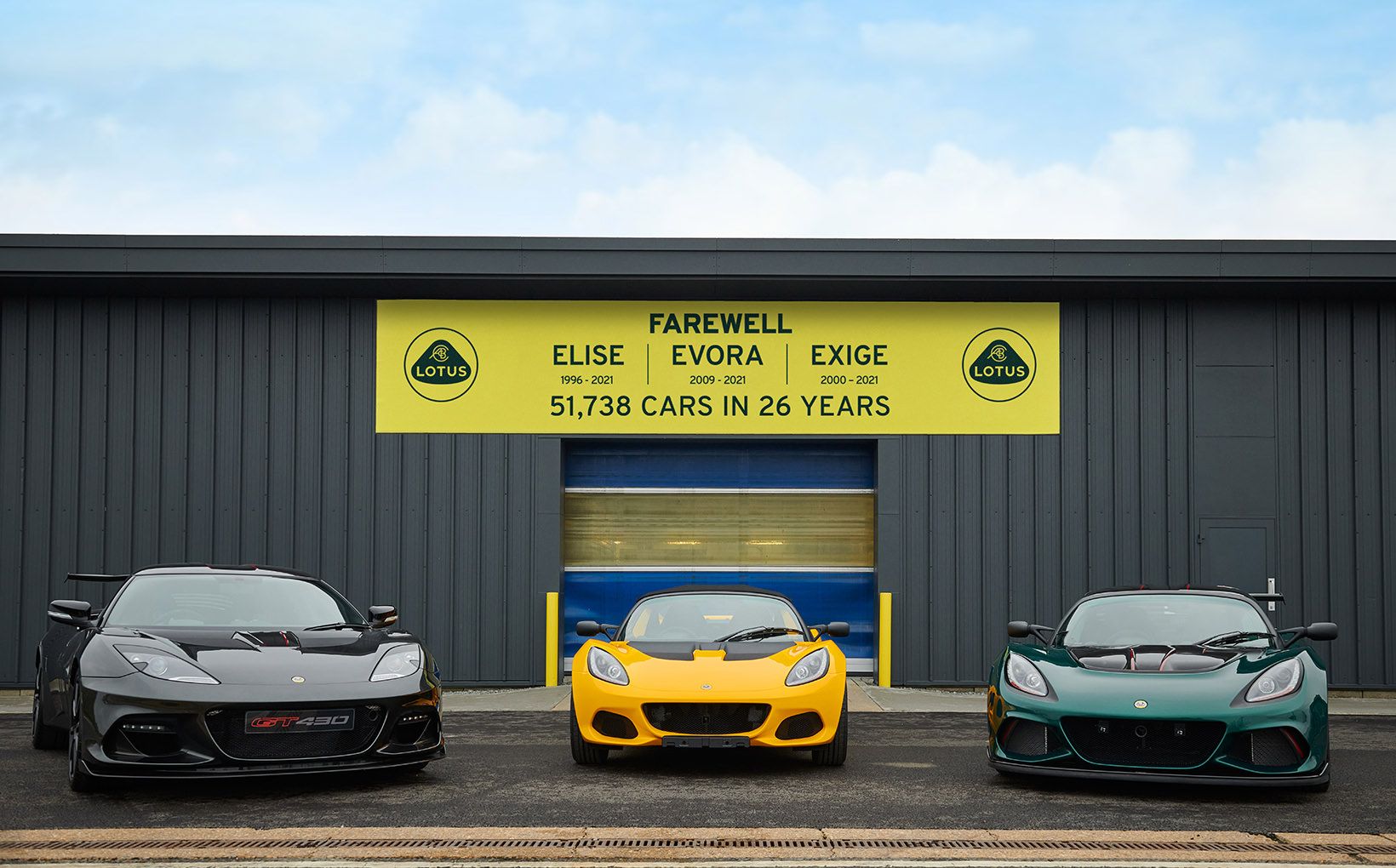 The ‘E’ trio will be replaced by the Emira in Q2 this year, and electric models thereafter.

The Emira will be joined by the Evija electric hypercar and the all-electric Type 132, Lotus’ first SUV, which will be revealed to the world around the second quarter of 2022.

The final examples of the Elise, Exige and Evora now form part of Lotus’ heritage collection.