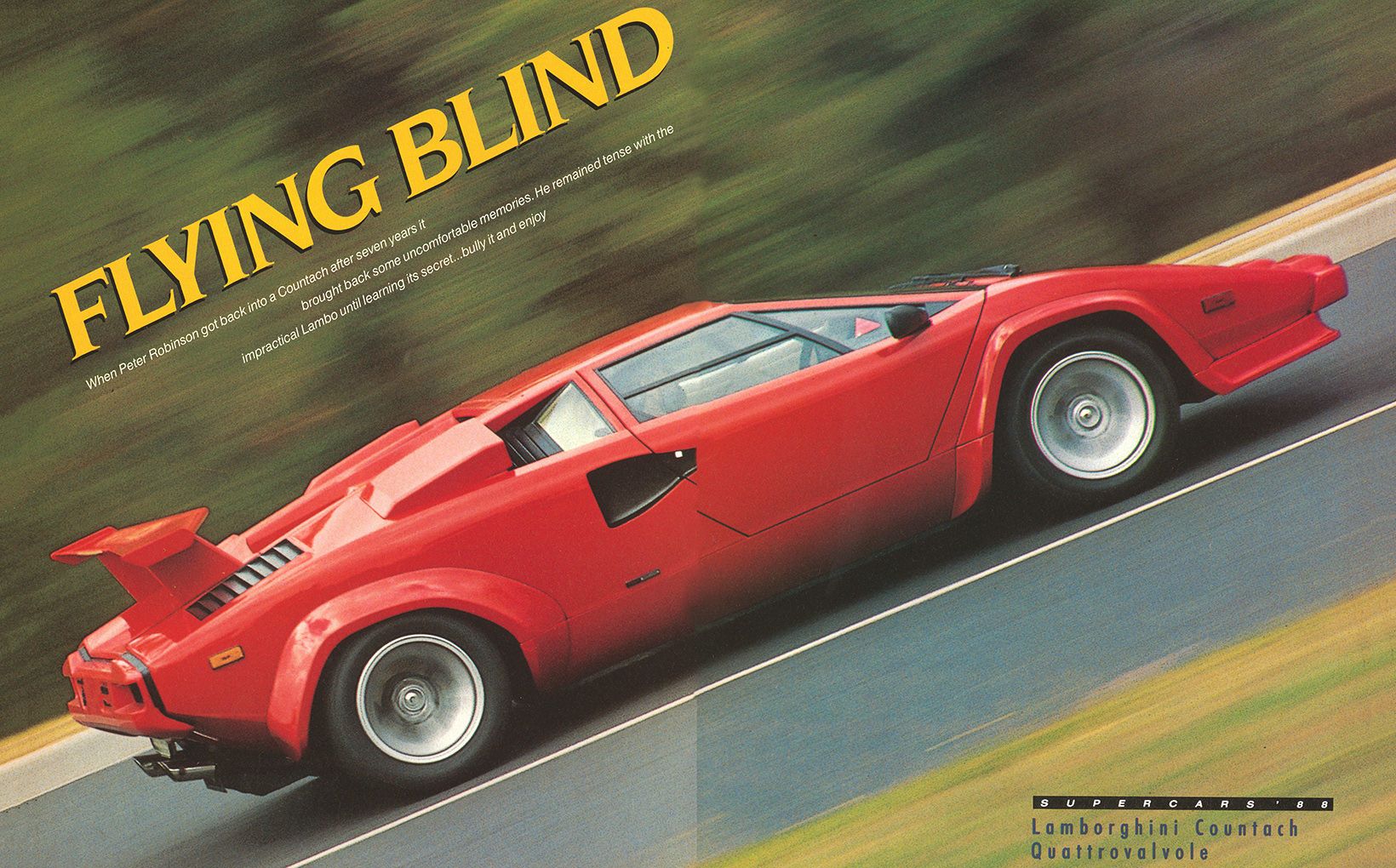 The last time I drove the Lambo Countach it left me totally intimidated. After two days behind the wheel on Victoria's thrilling Great Ocean Road I knew the Countach was beyond my driving skill. I understood this fantastic machine required a completely different technique. It was not a driver's car in the same manner as a Porsche 944 or a Mazda RX -7 or Toyota Celica, something to fling about, to push easily, enjoyably to its limits.

No, it was clear the Countach couldn't be judged by any normal parameters. The Lamborghini's ability, and the driver's shortcomings, were realised when I was pushing hard on that marvellous sinuous ribbon of blacktop. The engine and gearbox boomed off the cliffs. The shriek from the cams and gears filled the cockpit. There was, I felt, no question of the car's exceptional speed. Point to point nothing could have beaten us. Between car and driver we were winning the Targa Florio. Or so it felt. Yet, all the time our photographer sat back in the 380SEL Benz camera car, effortless in comfortable pursuit, tape playing, air conditioning maintaining an even temperature. Under brakes on the damp road surface the front tyres of the Countach squirmed uneasily, locking up over small bumps, slowing us down and filling the driver with foreboding. The width of the car on that narrow road and the lack of visibility to the sides proved an immense barrier to ultimate cornering. Even as the road dried I still couldn't shake off the Benz, not until we came to the long straights west of Geelong. Only then did the sheer top-end muscle of the Countach allow it to pull ahead. Respectfully, I left the car in Melbourne conscious I had chosen the wrong road for this car, despondently aware of my limitations as a driver. 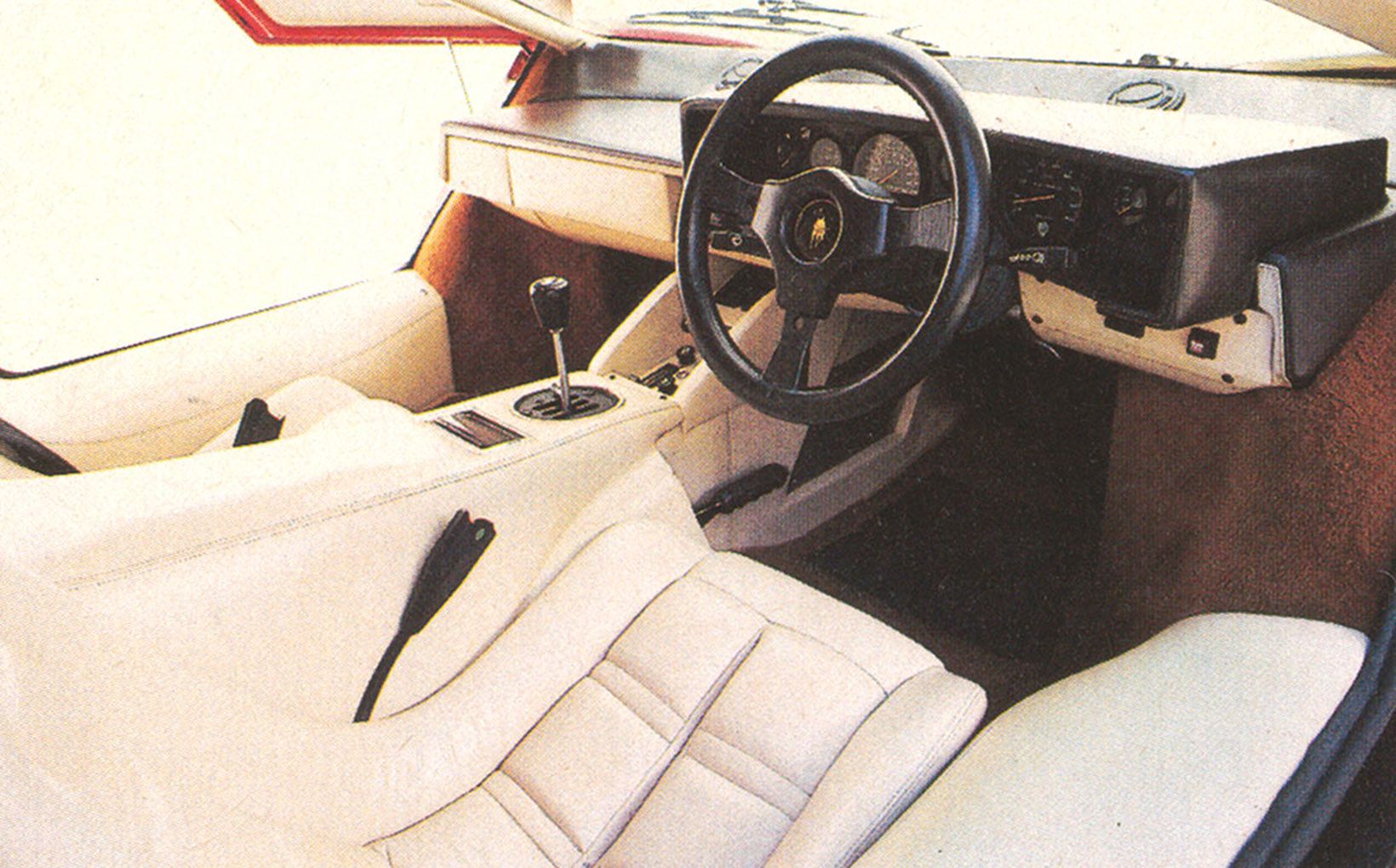 Seven years have passed since that previous encounter, now it was time to try again, on different yet still challenging roads. The Countach was the last Lamborghini in which Ferruccio, the company's creator, was involved.

And its breathtaking, even outrageous, styling is as provocative in 1988, a year before production is terminated, as it was in 1971, when it was first seen at the Geneva motor show. Even in its latest form, with awkward American crash standard bumpers, huge rear wing, wheel arch extensions, and front air dam hiding the purity of its sculptured lines, it inspires amazement. 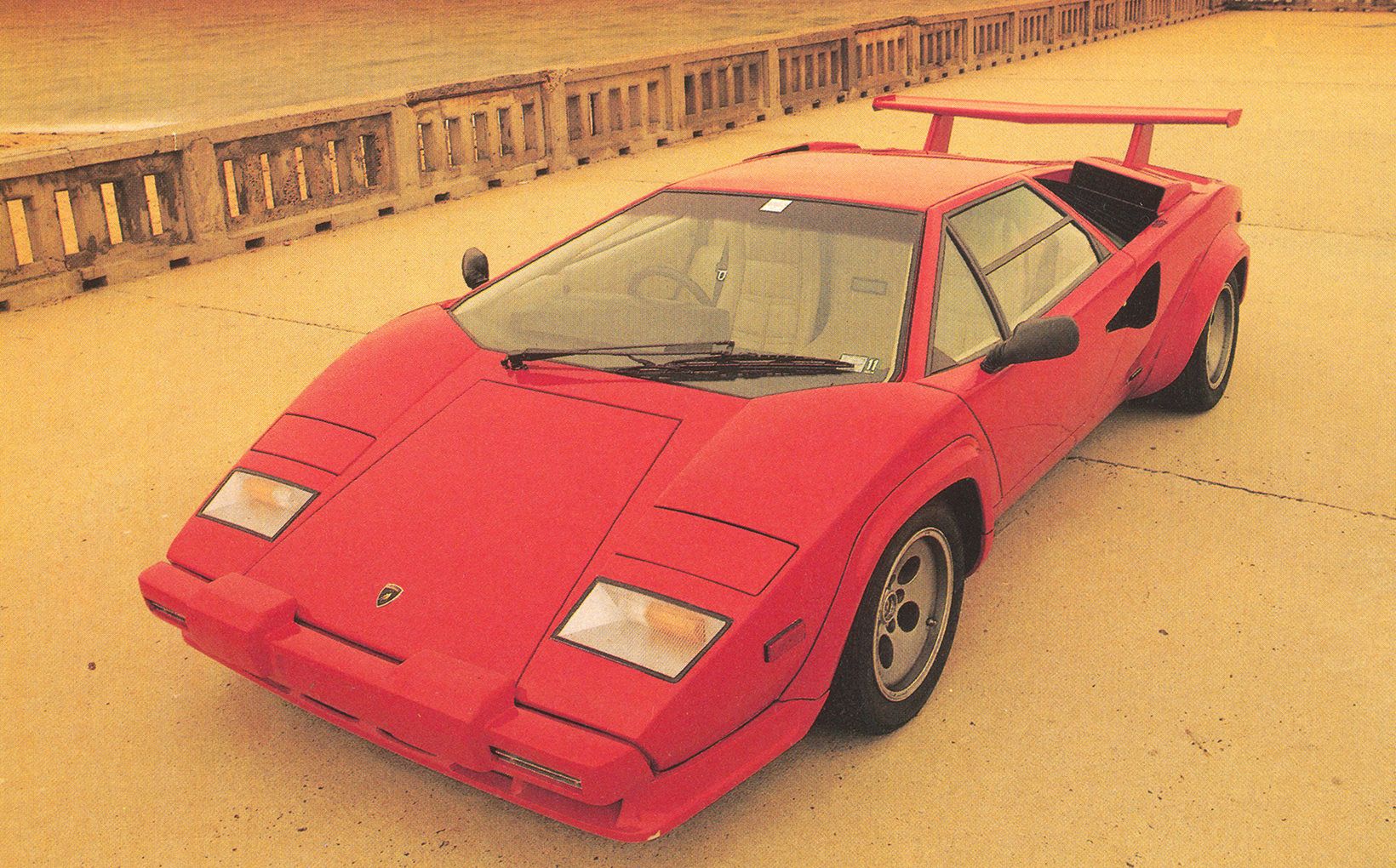 Daunting though it seems from the outside, nothing prepares you for the impact from behind the wheel. As most people know, the huge doors open up, not out. Sliding in over the wide side sills, which incorporate much of the car's tubular structure, is tricky. The one-piece bucket seat is small and now has a tilt mechanism to provide more effective room. The centre console, which hides the end of the engine and the five-speed gearbox, rises up to the rear and is also very wide.

You sit low, backside almost on the ground, knees up around the wheel. The view over the small, almost vertical steering wheel (adjustable for reach and height thankfully), to the vast dashboard in front of the driver, is extravagant. But you're even more conscious of the severely angled windscreen with its A-pillars just above the driver's head and the base of screen down near your feet. There is no sight of anything beyond, except the road. Three-quarter visibility is poor, and the engine's air-box bulging above the carburettors blocks out the rear window. In the rain, and at night, it is almost impossible to do any more than creep along in your chosen lane. The single wiper only reaches halfway across the glass, and light reflects on the seemingly flat windscreen and in the mirrors. 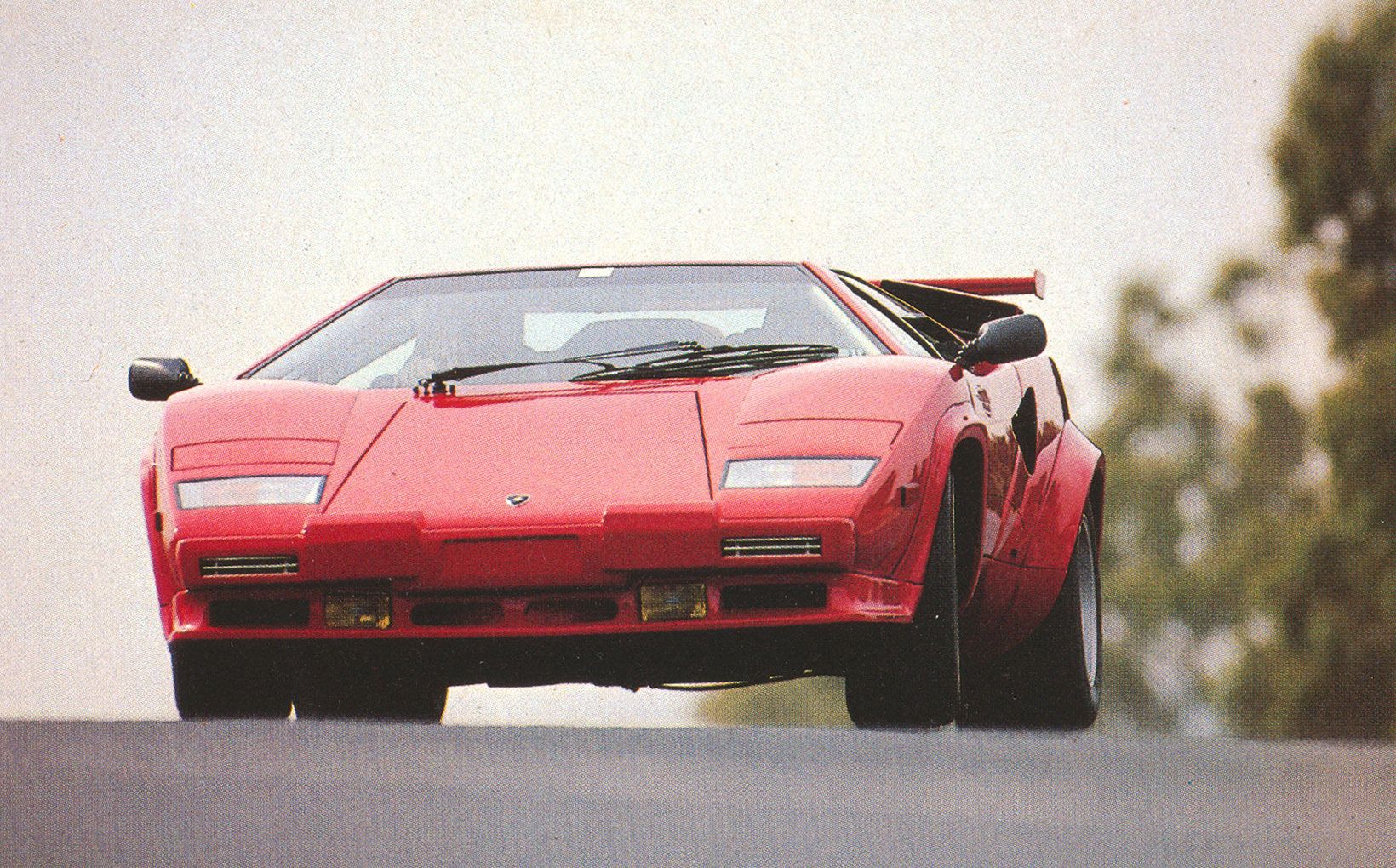 Nobody ever claimed the Countach was practical. This is a very wide car, squat and short, with tiny front and rear overhang because all the mechanicals are within the wheelbase. But it's still wide to the point of being intimidating. The car we drove, courtesy of the new Victorian distributors, Dutton Performance of Richmond, was the last of the 5000S models. It carried a December '85 compliance plate and was built just before the launch of the 5.2-litre Quattrovalvole. The Quattrovalvole has just been superseded by the $380,000 unleaded fuel-injected model and is marginally slower and less flexible than the 5.2 litre, 48-valve V12 when fitted with the six Weber 44 DCNF carbs.

We won't pretend the Countach is an easy car to drive initially. The accelerator is stiff and you learn to ease out the clutch at the 1300 rpm idle speed, so the engine almost stalls, before squeezing down on the accelerator. The alternative is to push through the resistance immediately and take off with a flurry, just on the respectable side of wheelspin.

Everything about the Countach's dynamics is firm, even heavy. The steering at parking speeds is a chore and the turning circle is embarrassingly wide. While the steering does become lighter, it is never less than tense. The gear lever needs a positive push/pull through its stiff-gated change. First is down on the left, opposite reverse which has a small lock-out. The clutch is heavy and has a very long travel. Even the brakes, spongy initially, demand a determined push at high speeds.

The engine bursts into life almost simultaneously with the turn of the ignition key. The cockpit is filled with sound, the driver with an urgent sense of anticipation. Twelve side draught throats suck air into the engine. There is a healthy whine from the gears and four camshafts. Overcome the throttle resistance by blipping the accelerator and the revs soar. This engine, bred from the original four-litre V12 used in so many Lamborghinis, is vibrant, energetic, the exhaust note strident.

Compared with the four-litre S Countach we tested in 1981 , this car has considerably more torque and flexibility. It's less demanding to drive at low speeds because there is now no need for high revs before changing gears. Where the old car needed 4000 rpm before changing, the 5000S pulls beautifully from less than 3000 rpm, the exhaust note growing deeper, the suction just behind the driver's head drowning the cabin in a tumult of glorious sound. The car we drove had an expensive Alpine sound system, I can't imagine any driver taking it seriously, no music could compete with Giampaolo Dallara's V12 masterpiece. 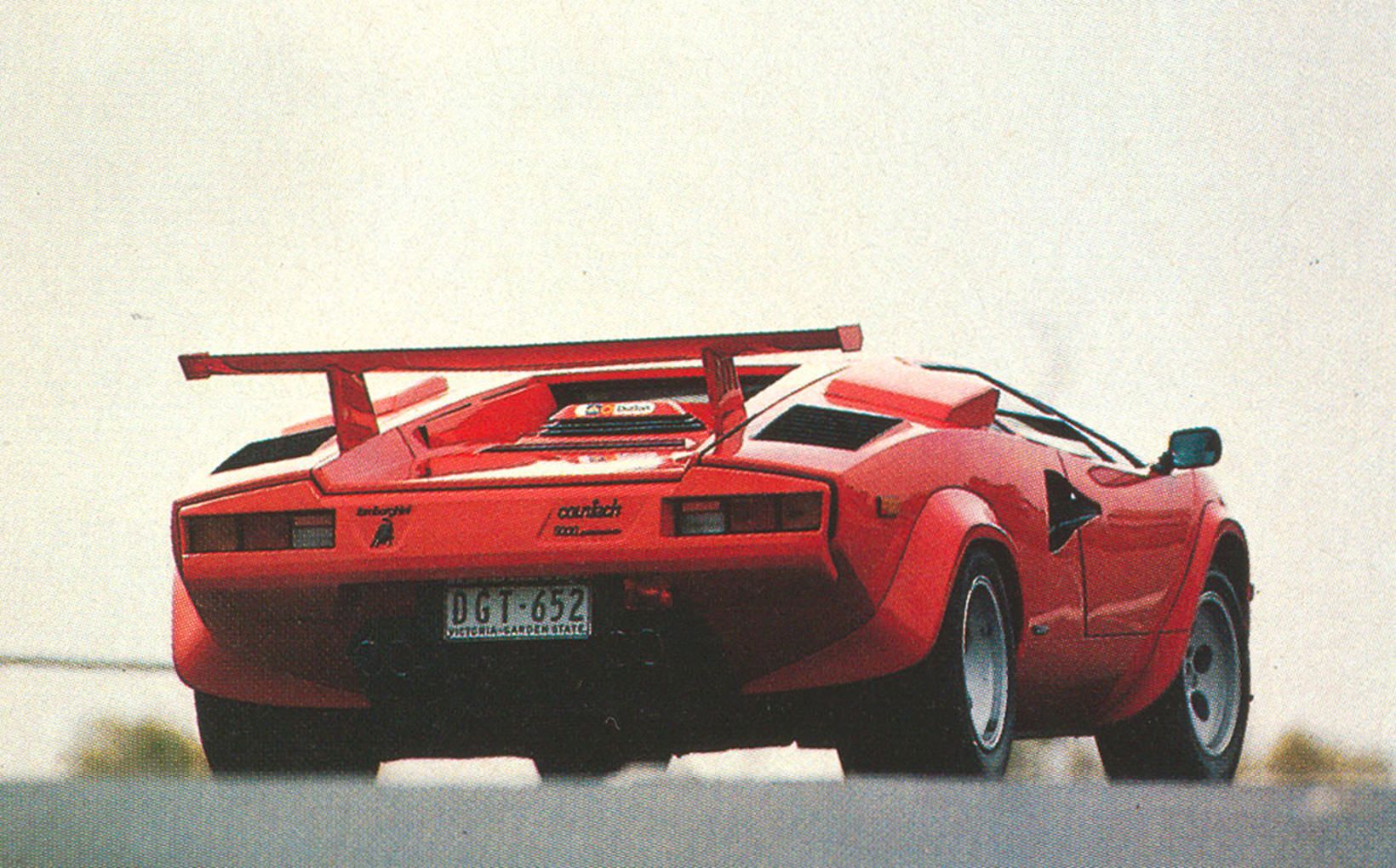 There is always power in the five-litre Countach, for there is no sudden point at which it becomes alive. It is constantly strong and willing, pushing the driver back in his seat, urging him to go harder, to use more revs and exploit the chassis. If anything, the 5000S has a greater tendency to understeer than the previous model. There is, as a trade-off, improved stability. The nose pushes hard, steering effort increasing through corners, though the actual roadholding on the massive Pirelli P7 tyres is formidable. At the front there are 225/50VR15s, at the back huge 345/35VR15s. Yet the ride, always firm, and damped so there is virtually no body movement, is never uncomfortable, or harsh, despite those ultra-low profile tyres.

So the Countach grows on you. It becomes less  formidable. The width less significant. The visibility no longer impossible. It all came together exiting a fast left hander when the road went right then left, its verges lined with Armco for this sudden and artificial slalom. Snatching third gear, right foot hard down on the power, the huge rear tyres biting hard into the bitumen but with no apparent loss of traction, I flicked the wheel hard right, lined up the apex of the left hander and accelerated away, the engine bellowing with pleasure. Abruptly the Countach became positively agile, the heaviness disappeared and in that instant I knew why it has always been the world's ultimate supercar, why it is the product of genius. It is as if the Countach has been asked to rise above normally mediocre demands and it responds with impatient brilliance. Turning effortlessly, naturally, demanding more of the same. Abruptly you realise it doesn't matter that the pedals are too close, the air conditioning inadequate, the turning circle monstrous, the instruments unreadable at night. This car needs a strong hand, it needs to be bullied, dominated by the driver. 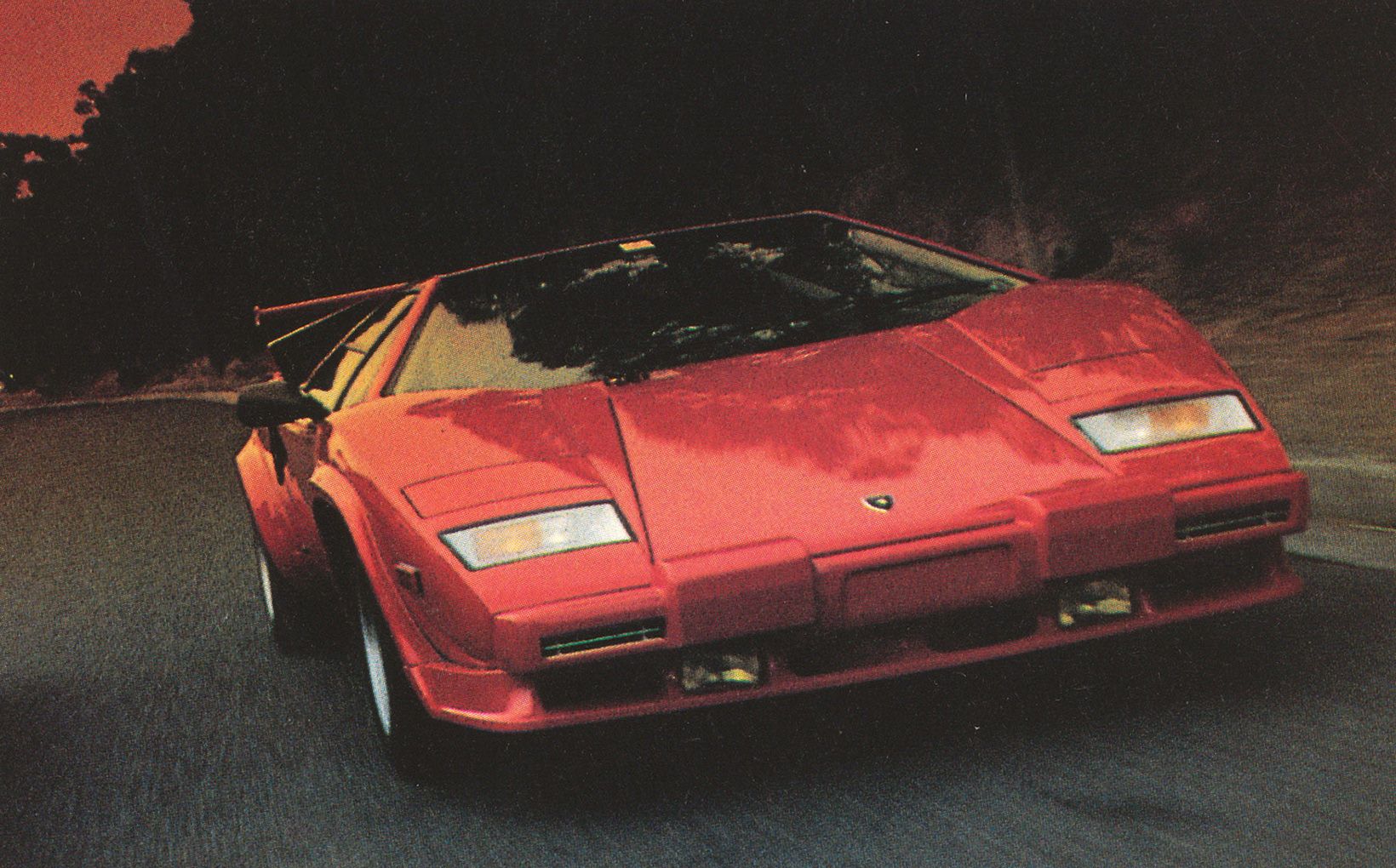 It may seem impossible to believe the Countach was first shown to a stunned motoring world more than 17 years ago. It is easy to forget that its rivals from the '70s - Ferrari's Boxer and Maserati's Bora- are long since dead. For the Countach remains the world's premier exotic, beyond anything Ferrari or Porsche or Maserati or Lotus or Chevrolet have yet had the courage to build. The Countach shuns its age with an arrogant shrug.

When the daring yellow prototype turned up in March 1971 it was regarded as a pure dream car. Surely it couldn't replace the still-striking Miura, only five years old? Yet, production of the Countach began in 1974 and they still trickle out of the Sant’Agata Bolognese plant at the rate of around 200 a year. 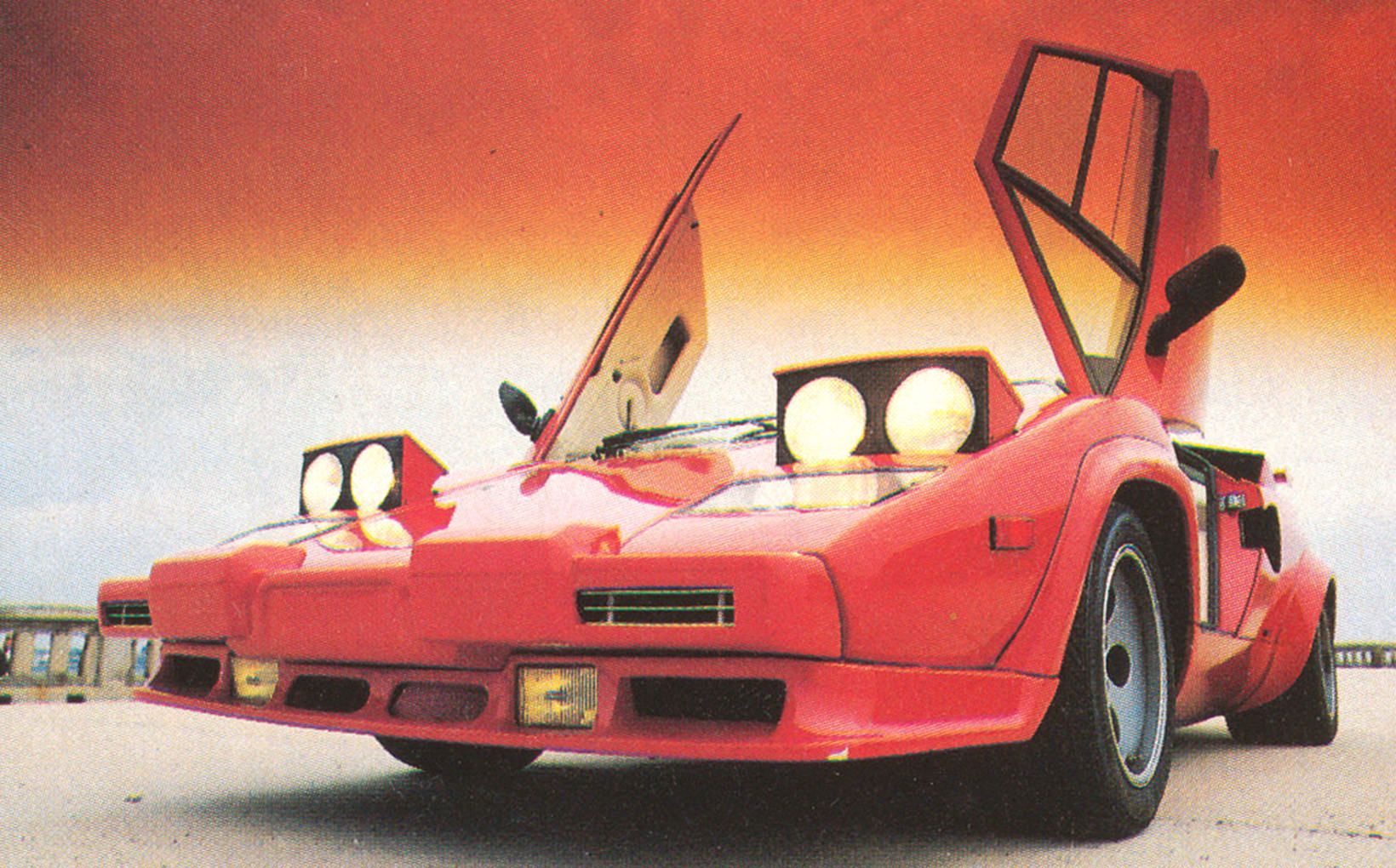 Today, it is an open secret that a replacement is being developed at the now Chrysler-owned Lamborghini, though few believe any car could make the same impact as the Countach. Already the revolutionary prototypes are being tested and the new car, scooped in our Foreign File pages, will be powered by the fuel injected, 5.2-litre V12 engine. It will aim for a top speed of between 320-340km/h, and is due to be shown in September '89.

So respect this car, certainly, for its stirring appearance, but also drive it hard. Wring it out, come to terms with the sheer excellence of its chassis and the breadth its engine. Take charge and you will have discovered why, after 17 years, it is unsurpassed.