The Hummer name is back as big and brash as ever, just a whole lot greener

HUMMER is back bigger, brasher and greener than ever with the iconic American nameplate reimagined by GMC into what could be one of the most capable cars in recent memory, perhaps even ever.

Due to go into production in 2022, the Hummer EV is being described by GMC as the world’s first ‘supertruck’ with a “GM-estimated” 746kW of power and 15,592Nm of torque on tap, enough to propel the enormous pick-up from 0-100km/h in “approximately” three seconds.

We put those phrases in inverted commas because these are what General Motors is quoting with all of the key outputs and performance figures yet to be officially confirmed. 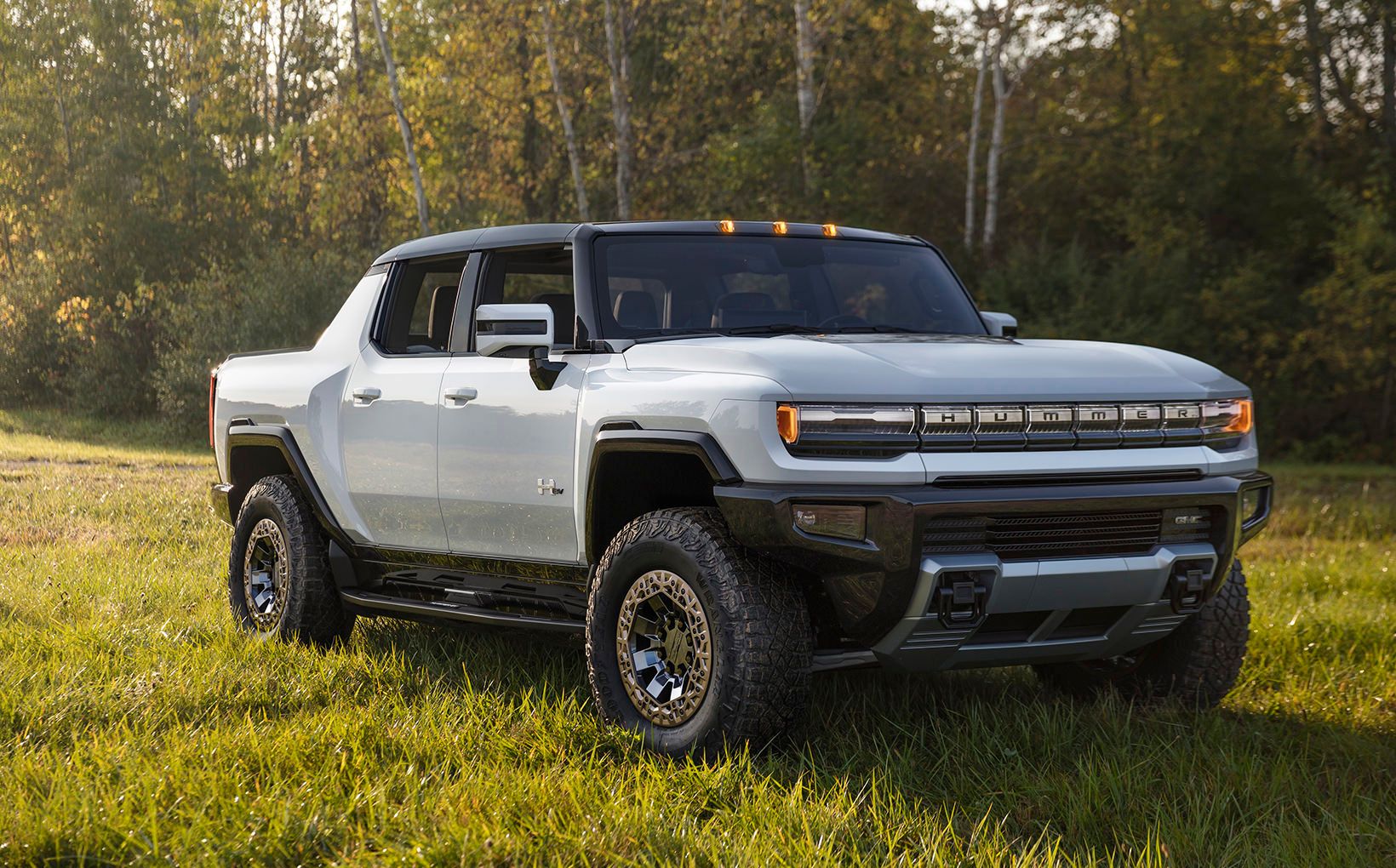 Big bold and brash, the Hummer has been reimaged as an electric ‘supertruck’.

Should they ring true, the GMC Hummer EV will be launched straight to the top of General Motors’ power charts, period.

Visually, you would be hard-pressed to mistake the Hummer for anything else with its massive, uniquely proportioned profile and bold styling cues.

The trim, accents and body cladding on the Edition 1 version features black and gold inserts, while the grille follows a piano-key motif with each segment containing a letter as it spells out ‘Hummer’, all of which are backlit, joining a set of flanking LED headlights to create a full-width light signature. 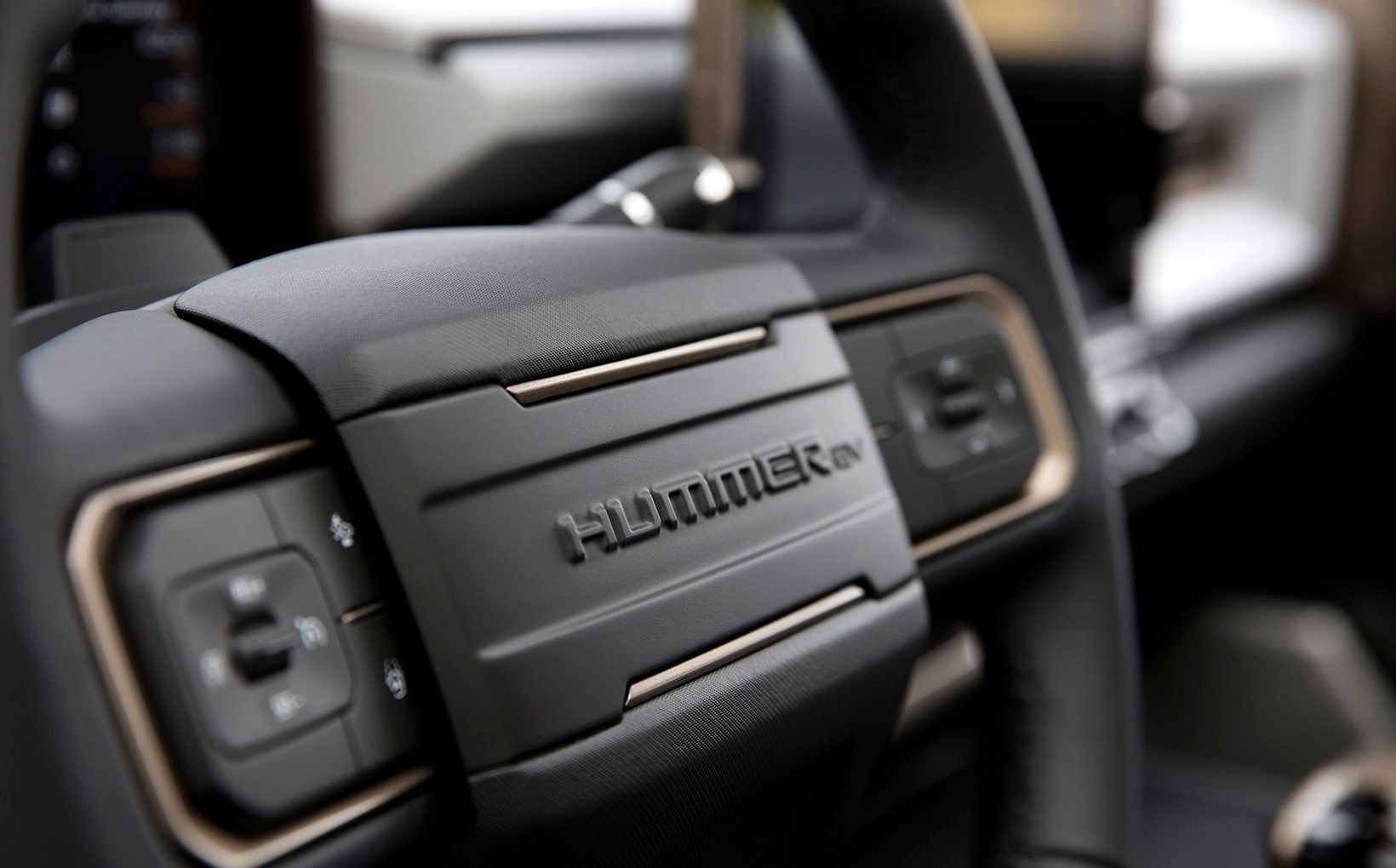 Black and gold accents set the tone for both the interior and exterior on the Edition 1.

The front fascia itself is narrow and squinty but the defining feature of the front end is the bulbous front bumper adorned with a chunky skid plate containing two exposed recovery points.

The contrasting black and gold theme is continued on the interior too with the dash, seats, door veneer and centre console all being two-tone while gold is used for the air vent surrounds, door inserts, infotainment screen surrounds and seat embossing.

In an elegant and clutter-free design, all of the infotainment, climate and drivetrain controls are accessed via the 13.4-inch infotainment screen and two underlining rows of buttons. 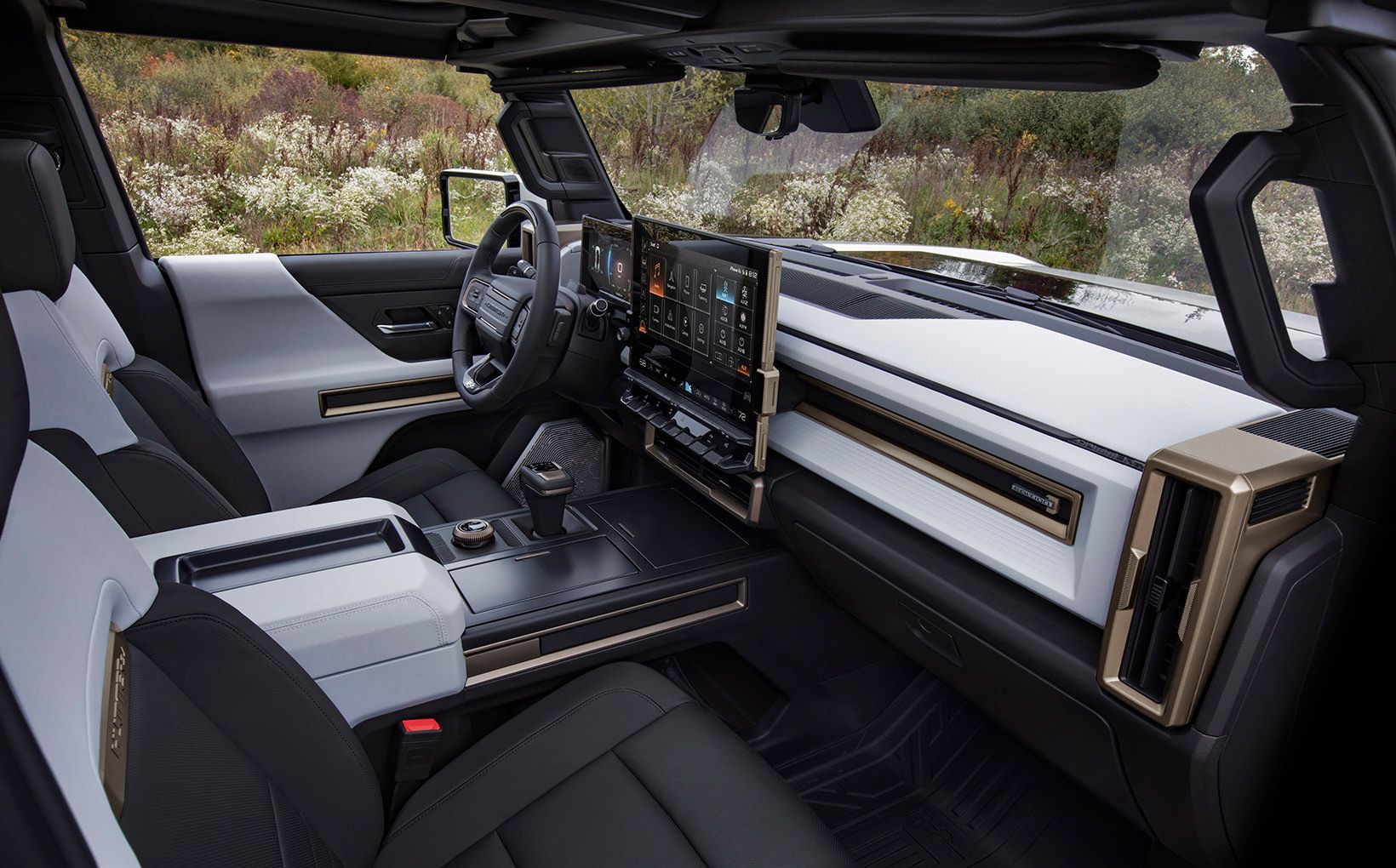 The interior is elegant and largely clutter free.

Originally launched as military vehicle of the US armed forces, the Hummer nameplate has always been synonymous with ruggedness and this looks set to continue on here too. 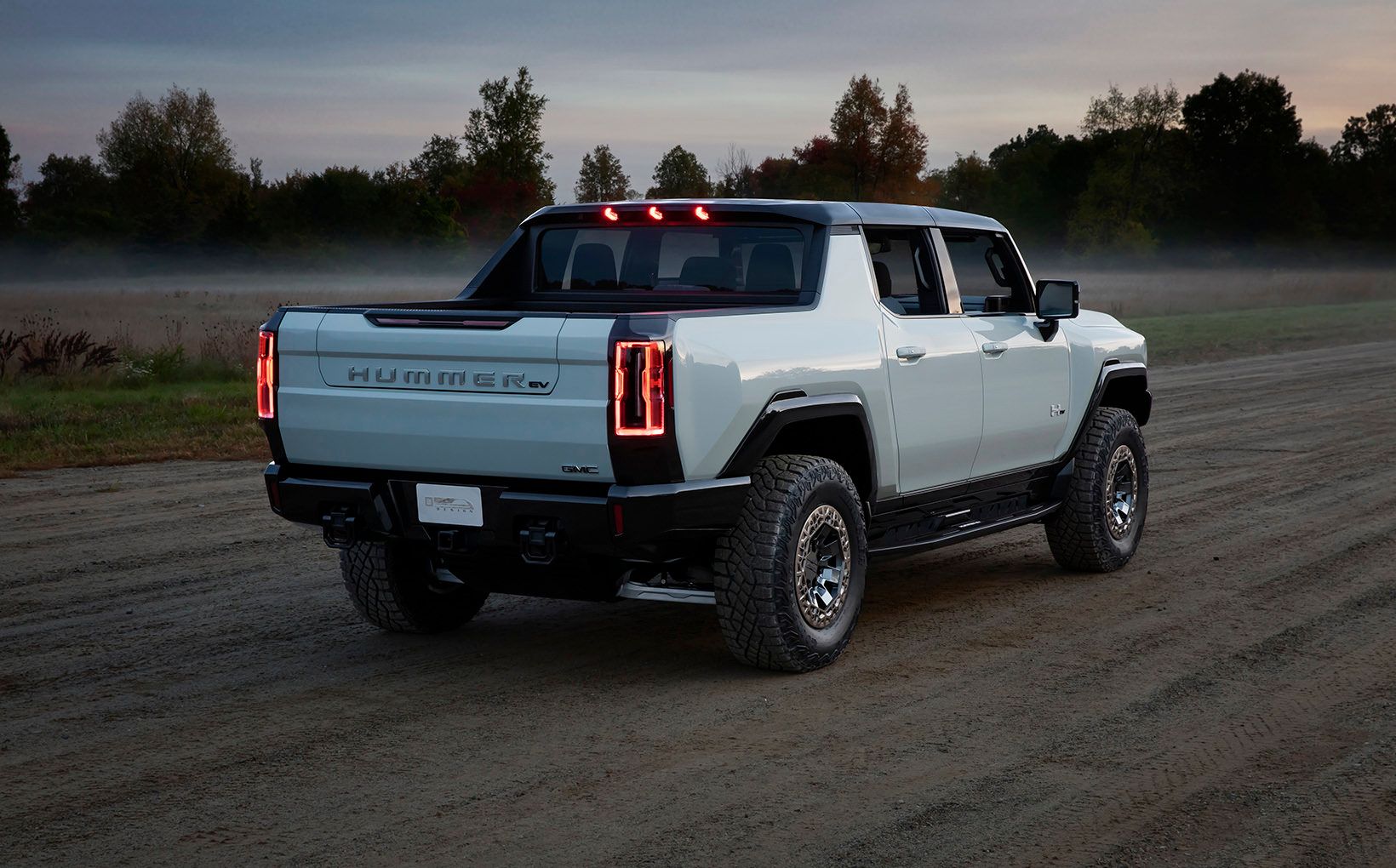 Blistering on-road performance and epic off-road ability is not a common combination.

Those black and gold wheels are wrapped in 35-inch tyres and the air suspension is height adjustable, meaning drivers can literally rise above severe obstacles using Extract Mode. Full underbody guards and rock sliders are fitted as standard, as is an industry-first ‘CrabCrawl’ function, allowing the car to move diagonally courtesy of its all-wheel-steering system.

It is all impressive stuff and surely has off-road fans licking their lips.

Those more interested in the greener details of the supertruck may be interested to know that GMC is expecting a full charge to net the driver up to 563km (350 miles), however much like the power and performance figures, an exact battery capacity is yet to be confirmed. 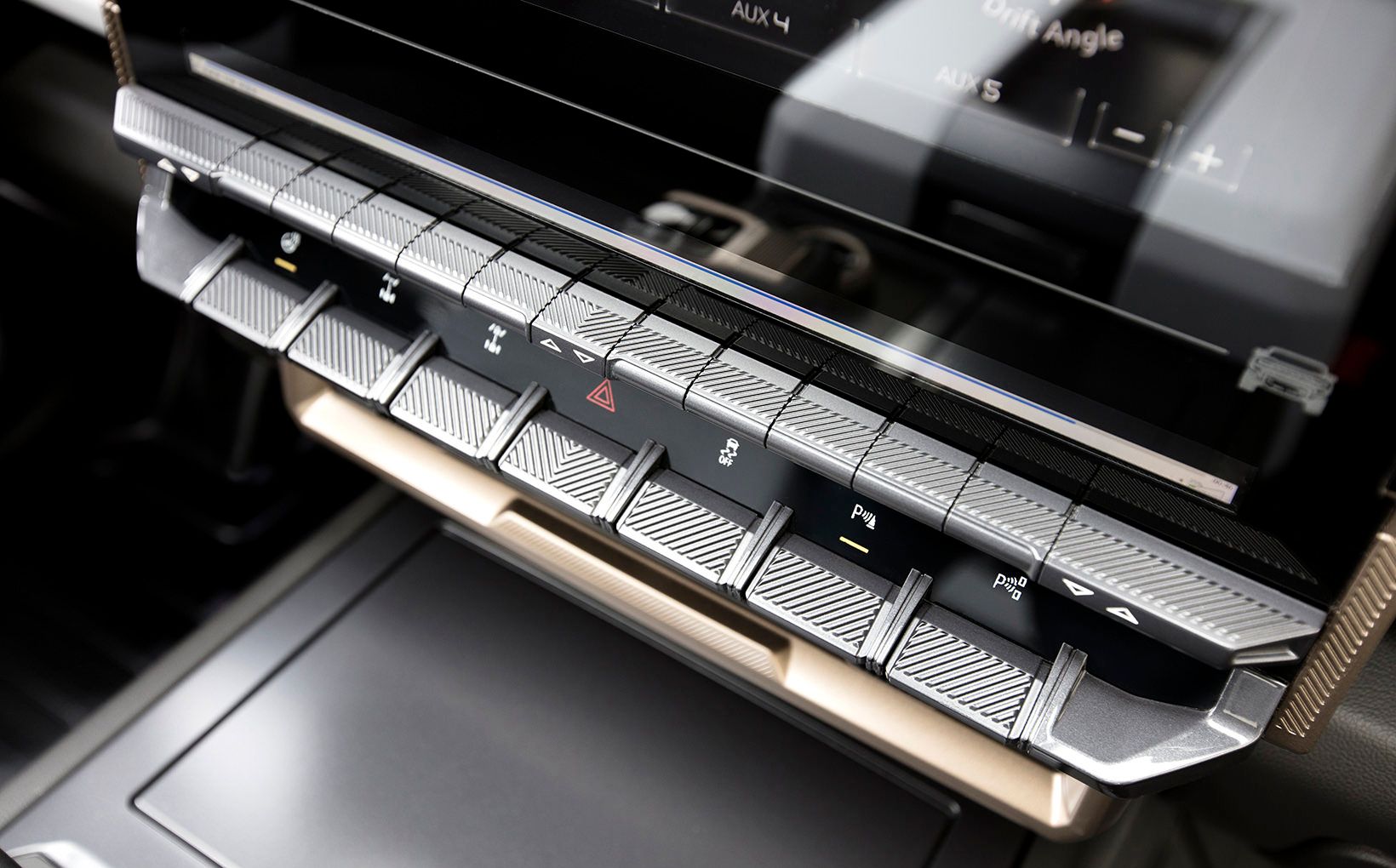 A lot of important details are yet to be detailed or confirmed.

According to GMC, the Edition 1 will be the most expensive version of the Hummer EV with the 3X, 2X and 2 all due to follow in 2022, 2023 and 2024 respectively, each one getting progressively cheaper.

Those hoping for an Australian launch will have to be patient and hope for the best at this stage with General Motors Specialty Vehicles (GMSV) keeping its cards close to its chest but said it is pleased with the amount of global excitement surrounding the new model. 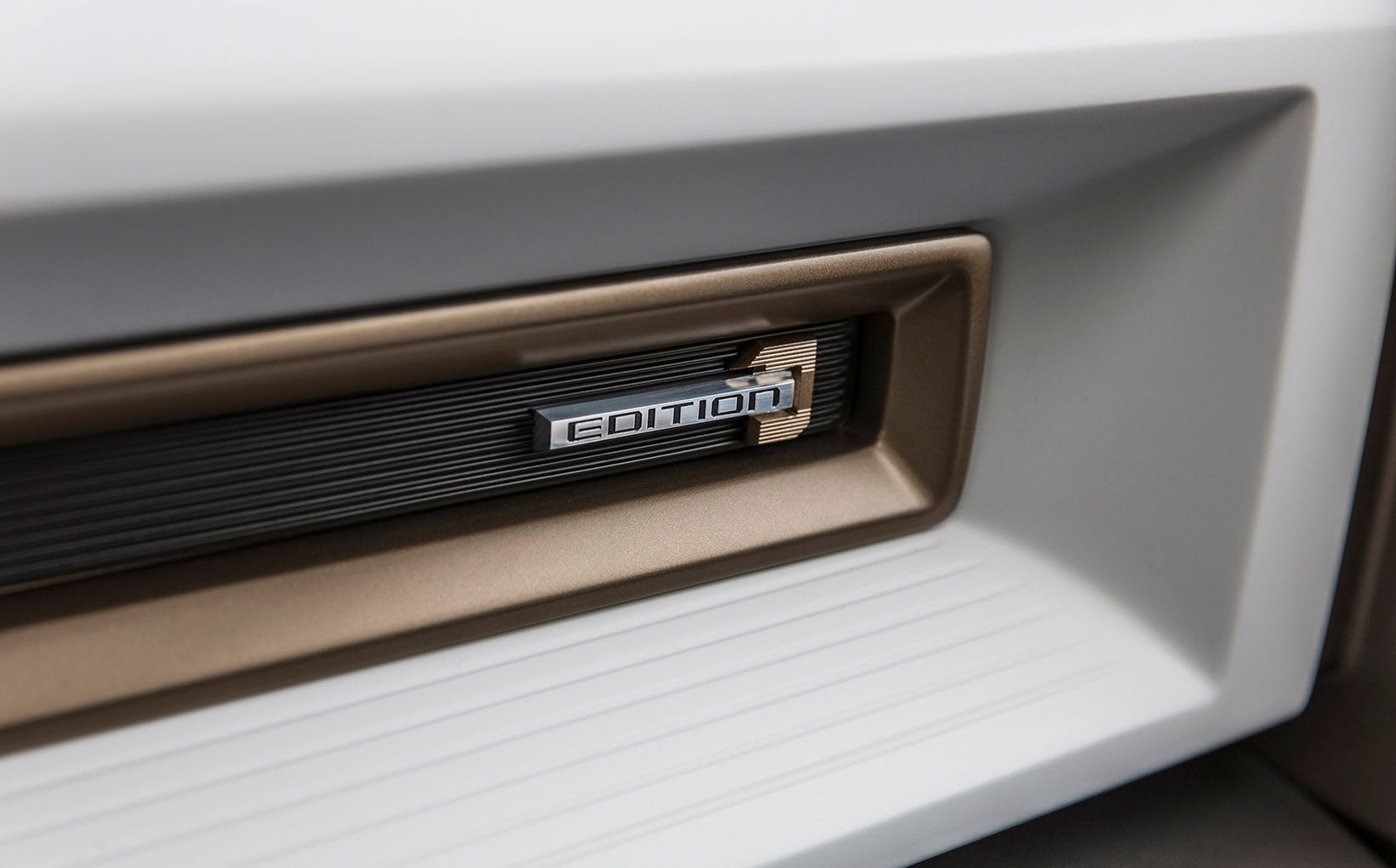 The Edition 1 does what it says on the tin and is the first version to go into production.

“It is another vehicle in the General Motors line-up that demonstrates our vision of an all-electric future,” a spokesperson said.

“We are not making announcements at this stage in relation to global markets outside of North America.”

Given GMSV’s previous emphasis on offering niche vehicles in Australia like the Chevrolet Silverado and looming Chevrolet Corvette, the Hummer EV certainly fits the bill as a plausible offering Down Under but it remains to be seen if the big EV will be engineered with right-hand-drive compatibility in mind. 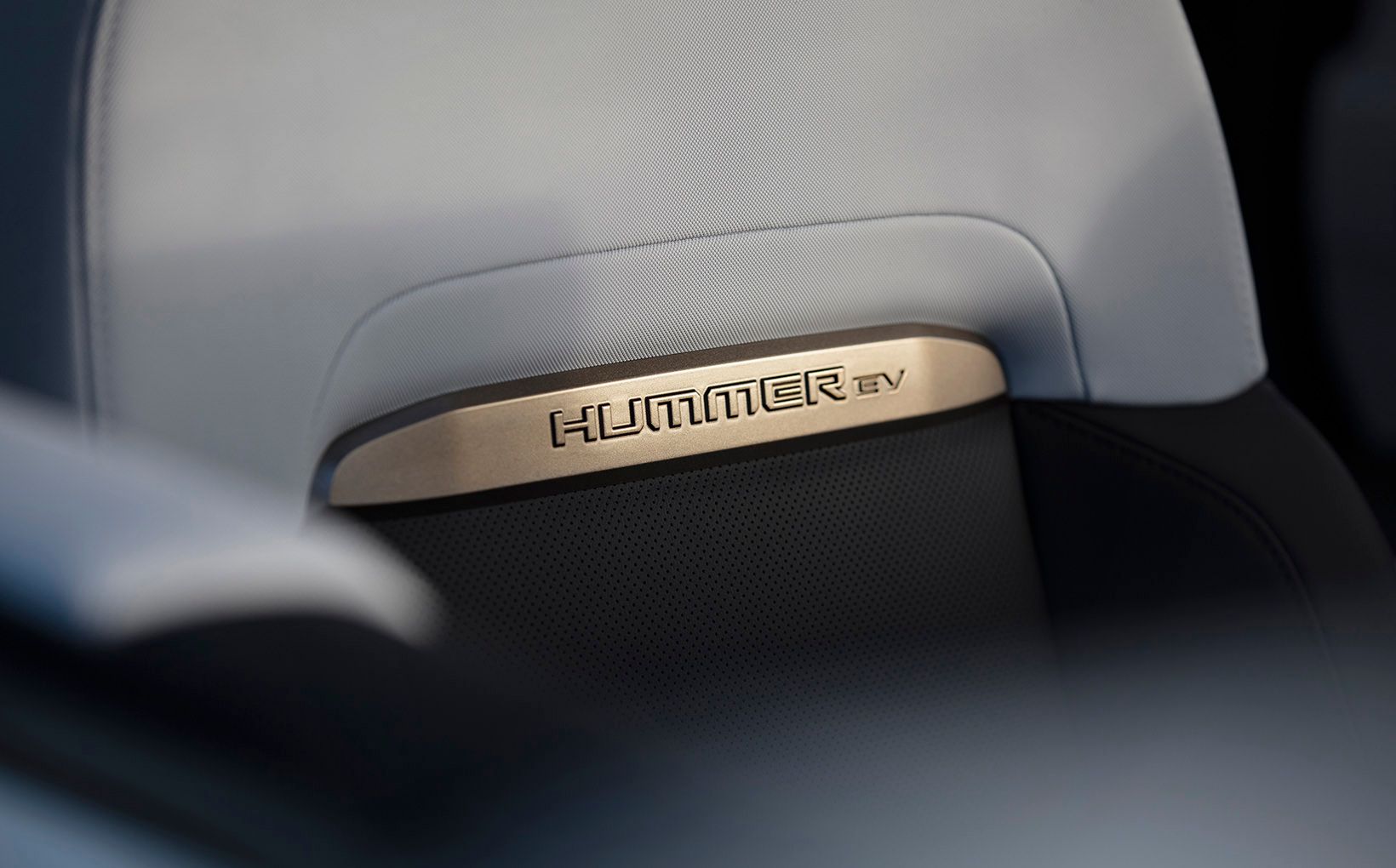 Three more versions after the Edition 1 are going into production between next year and 2024.

Back Stateside, global Buick and GMC vice-president Duncan Aldred was thrilled to have finally debuted the new EV and said it would defy the traditional perception of what a pick-up truck was and what it was capable of.

Protect your Hummer. Call Shannons Insurance on 13 46 46 to get a quote today.