For some time now, EV trailblazer Tesla has had somewhat of a stranglehold on the high-performance, all-electric sedan market, however that may be set to change with the reveal of the production-spec Lucid Air.

Having been teased since as far back as 2016, the Air has been a long time coming, however the figures released by the Californian start-up are set to give Tesla a fright. 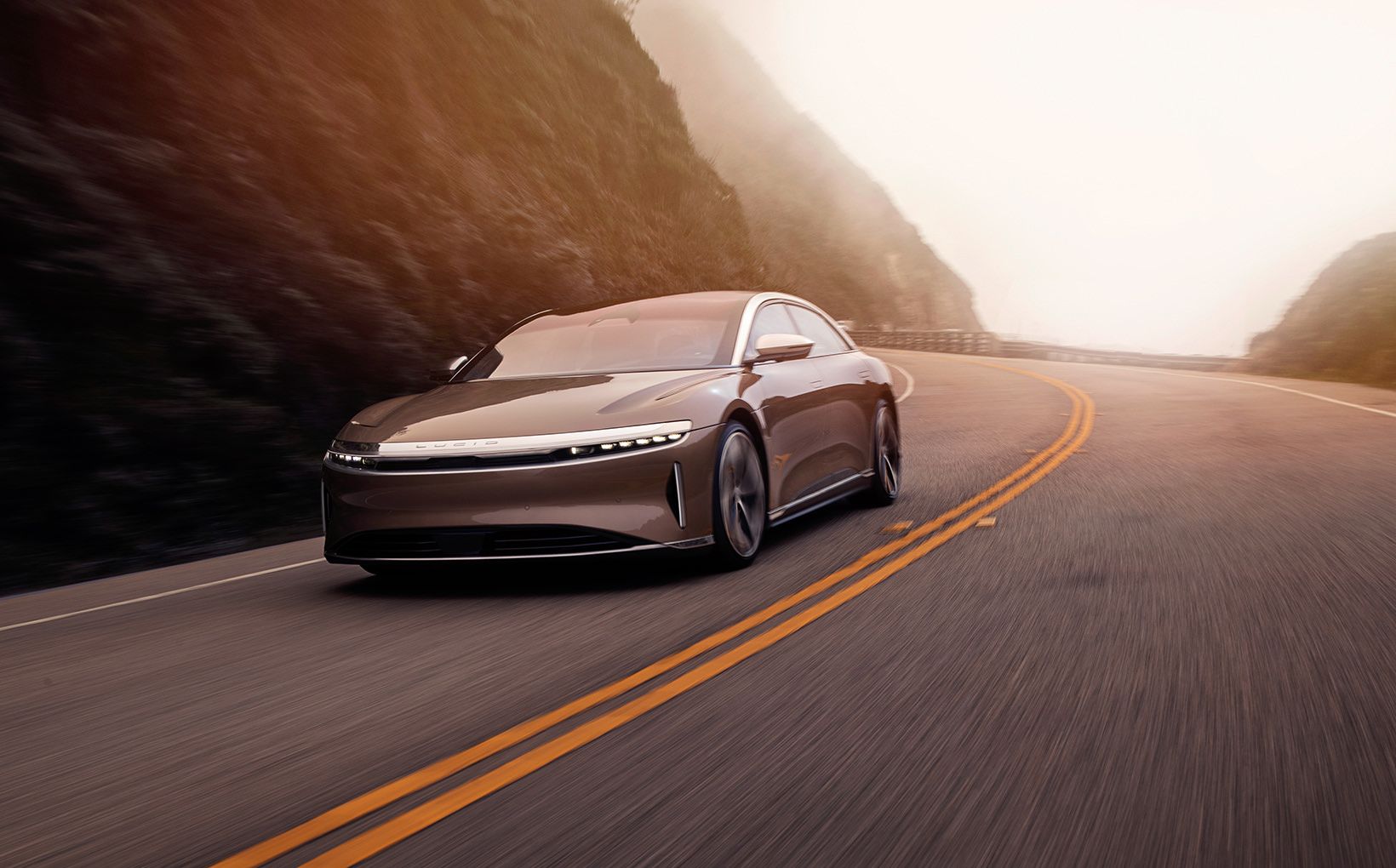 All versions of the Air are underpinned by the brand’s proprietary Lucid Electric Advanced Platform (LEAP), with power drawn from a meaty 113kWh battery pack (in top-spec guise at least).

The brand has not revealed performance figures for its entry-level offering, however the second variant in the line-up is the $US95,000 ($A130,512) Touring, which is able to pump out an impressive 462kW from its dual-motor, all-paw driveline.

Capable of a sprint from standstill to 97km/h (60mph) in 3.2 seconds, the Air Touring can reach a V-max of 250km/h and sports an estimated driving range of up to 653km. 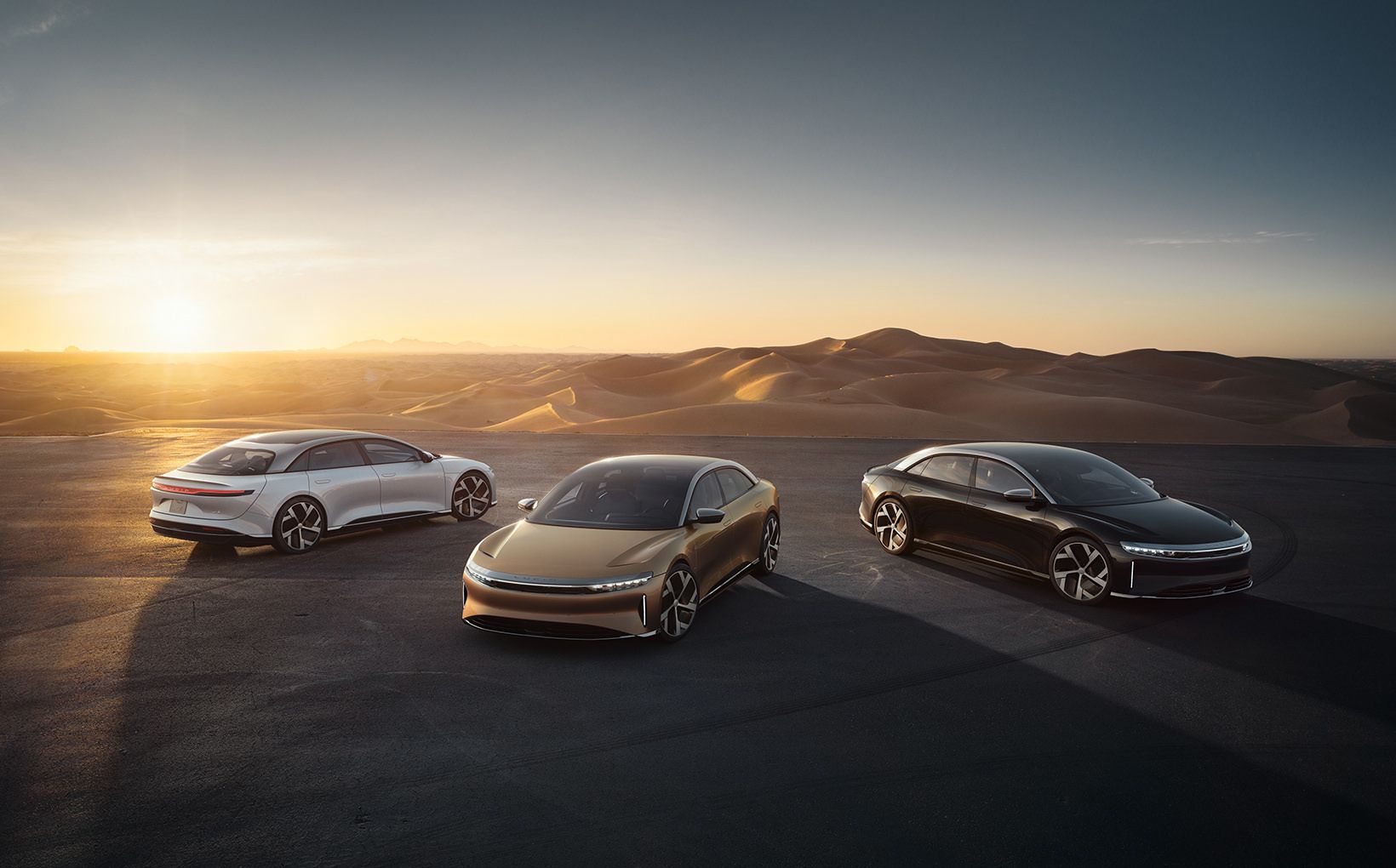 The Air will be offered with a range of variants, topped by the brutal Dream Edition.

The Dream Edition tops the range and as such, is the most powerful variant with a very healthy 805kW on offer, however range suffers slightly, down 22km on the Grand Touring to 810km.

Reaching 60mph takes only 2.5s, while top speed comes in at 270km/h – an impressive figure, but still well off the 378km/h claimed by Lucid during the testing phase. 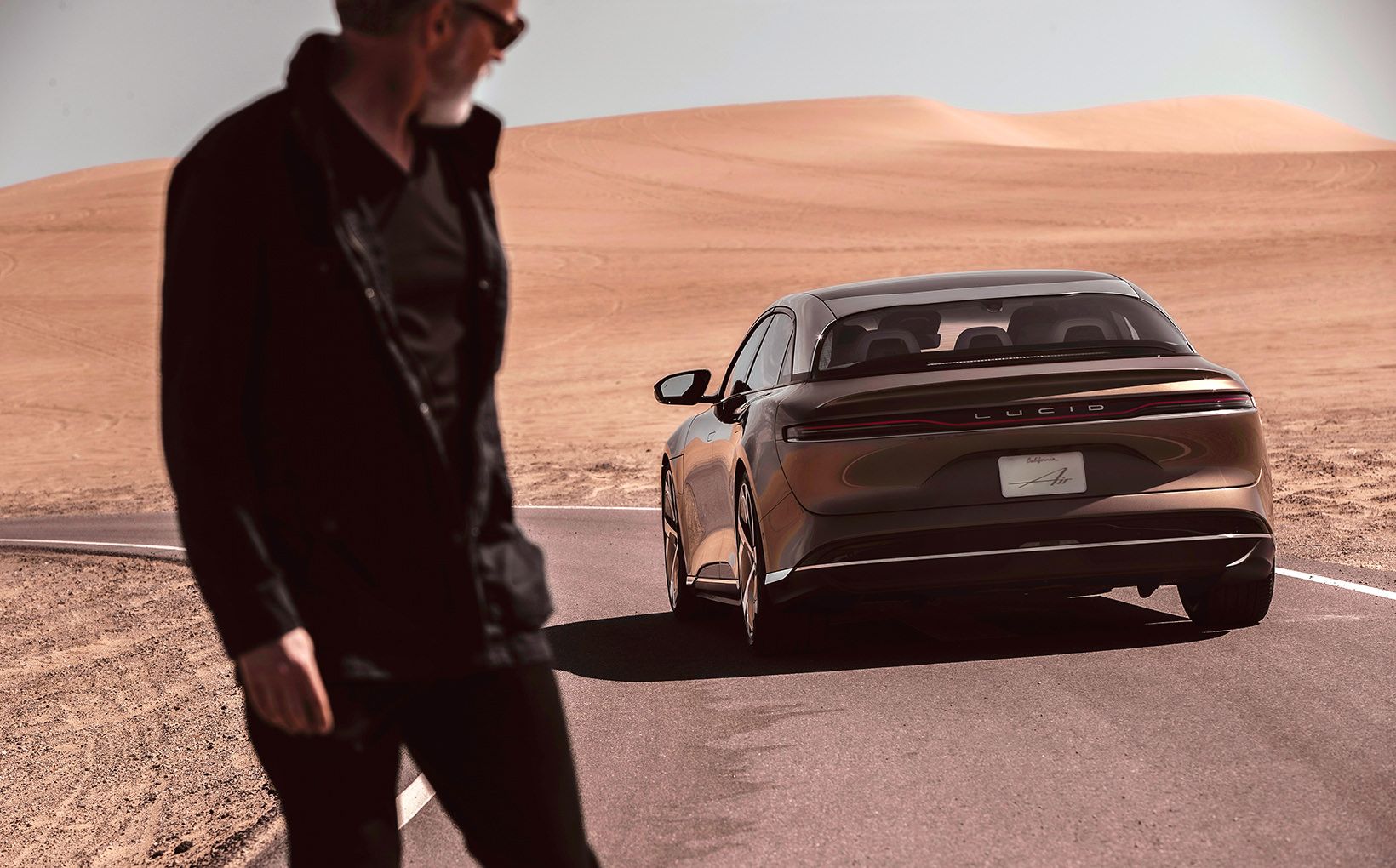 Regardless of variant, the Air’s batteries can be charged to provide 482km of range in just 20 minutes, making it one of the fastest-charging EVs in the world.

The sizeable range of the Air is due not only to its large battery pack but its particularly slippery drag coefficient of 0.21, which the brand claims is the best of any luxury vehicle.

When viewing the Air, it is not hard to see why its drag coefficient is so low, with a decidedly smooth, rounded design with soft edges and flowing surfaces. 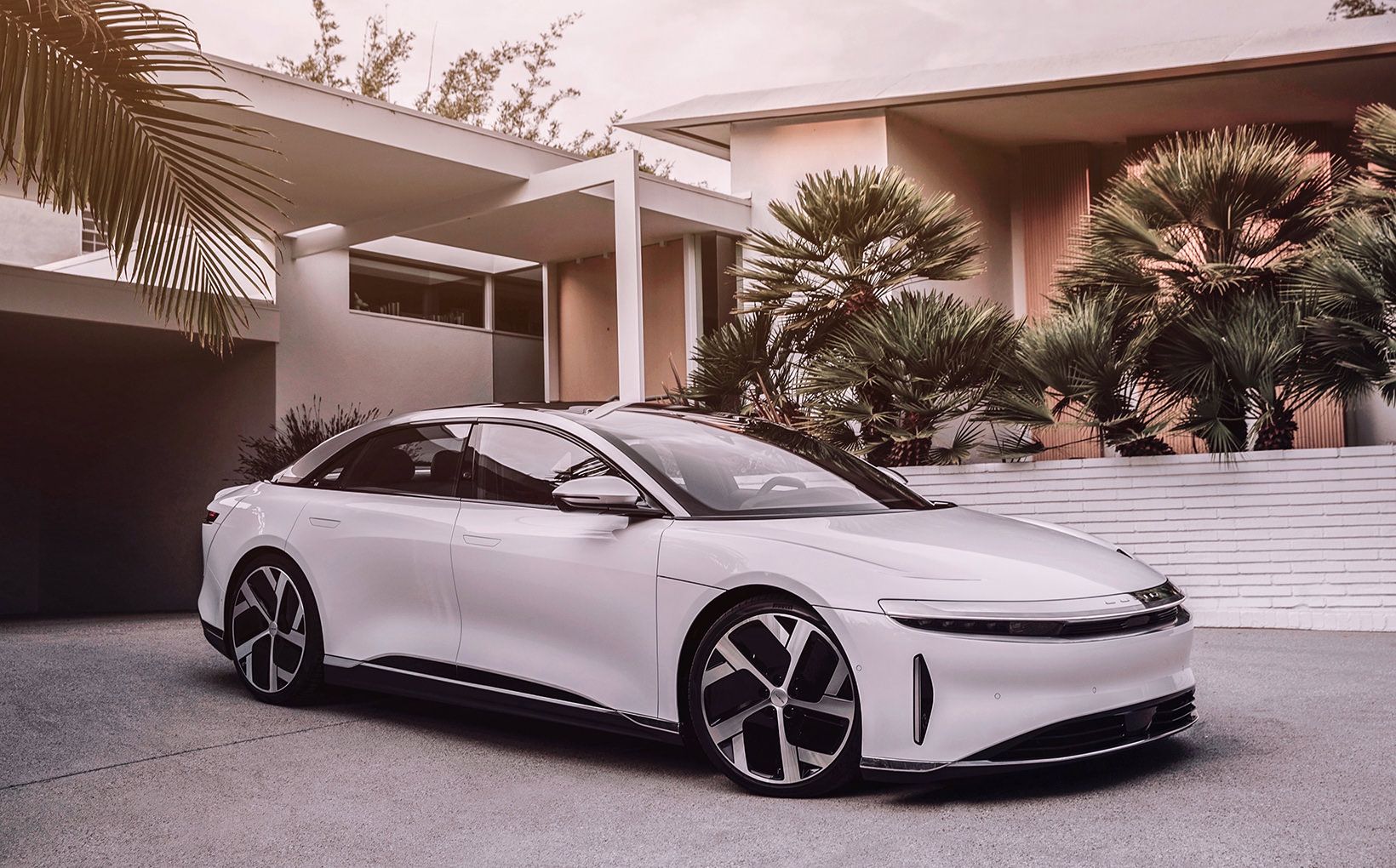 Lucid designers tried to make the Air as aerodynamic as possible, resulting in smooth, unbroken lines and surfaces.

From the front, the Air is given a sense of width by a thin chrome strip running along the bonnet line that almost acts as a sun visor for the slimline LED headlight cluster.

A smooth, clamshell bonnet sets the tone for the rest of the car’s bodywork, highlighted by a panoramic sunroof and thick chrome rails that frame the silhouette from the A- to D-pillar. 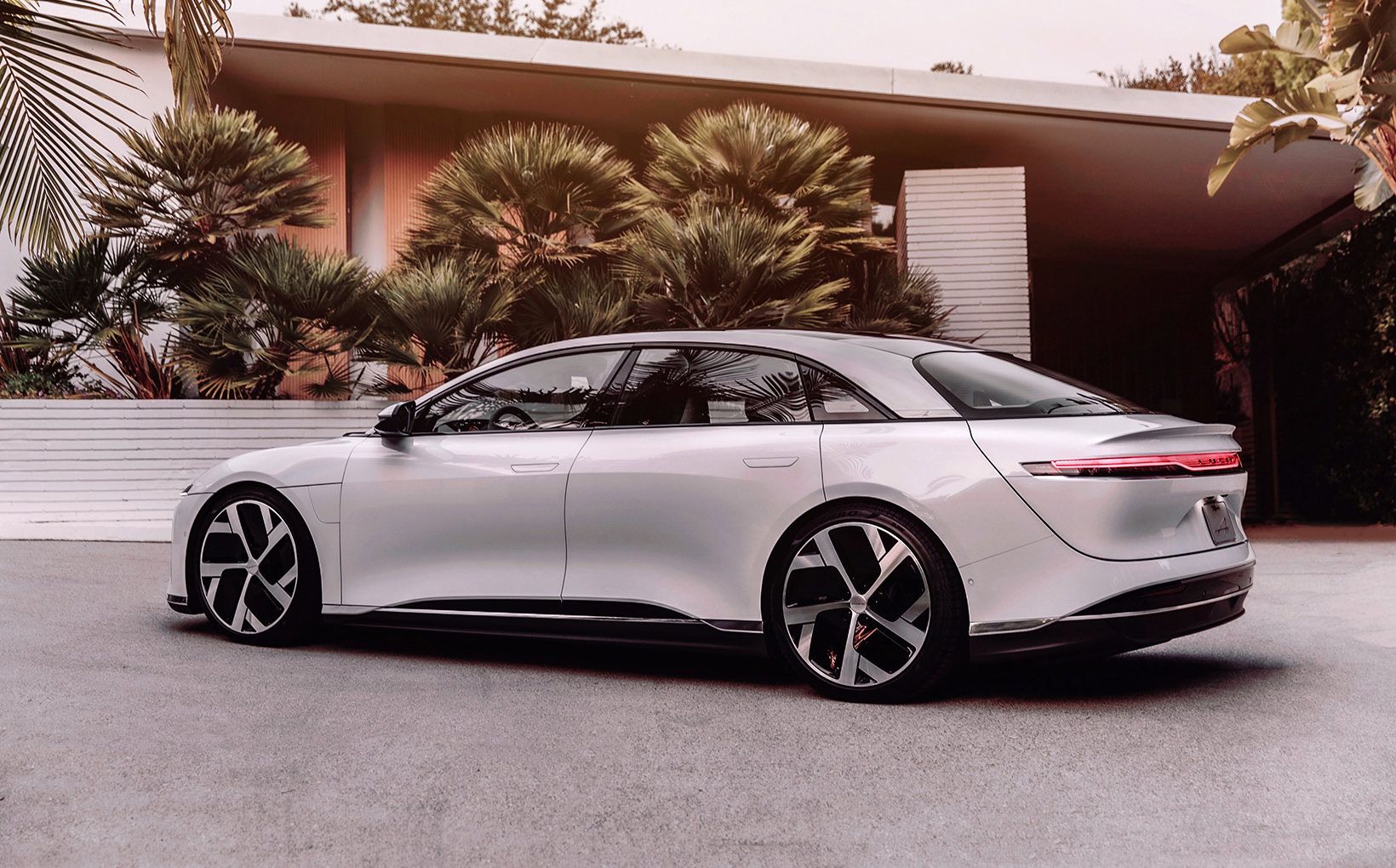 The Air’s rear styling is just as sleek and smooth as at the front.

At the rear, slim LED tail-lights follow the form of the headlights, with a subtle rear spoiler the only part of the car that breaks tradition with its smooth, slippery shape.

Inside, the design brief was to make the Air’s cabin as spacious and roomy as possible, with the end result being an interior the brand describes as having “a full-size luxury-class interior while maintaining an agile, sport sedan footprint”, along with the largest ‘frunk’ of any EV, however exact storage capacity has not been revealed.

The roomy interior has been made possible due to the LEAP sitting the car’s batteries low down in the vehicle floor, while stretching the wheelbase to maximise interior space. 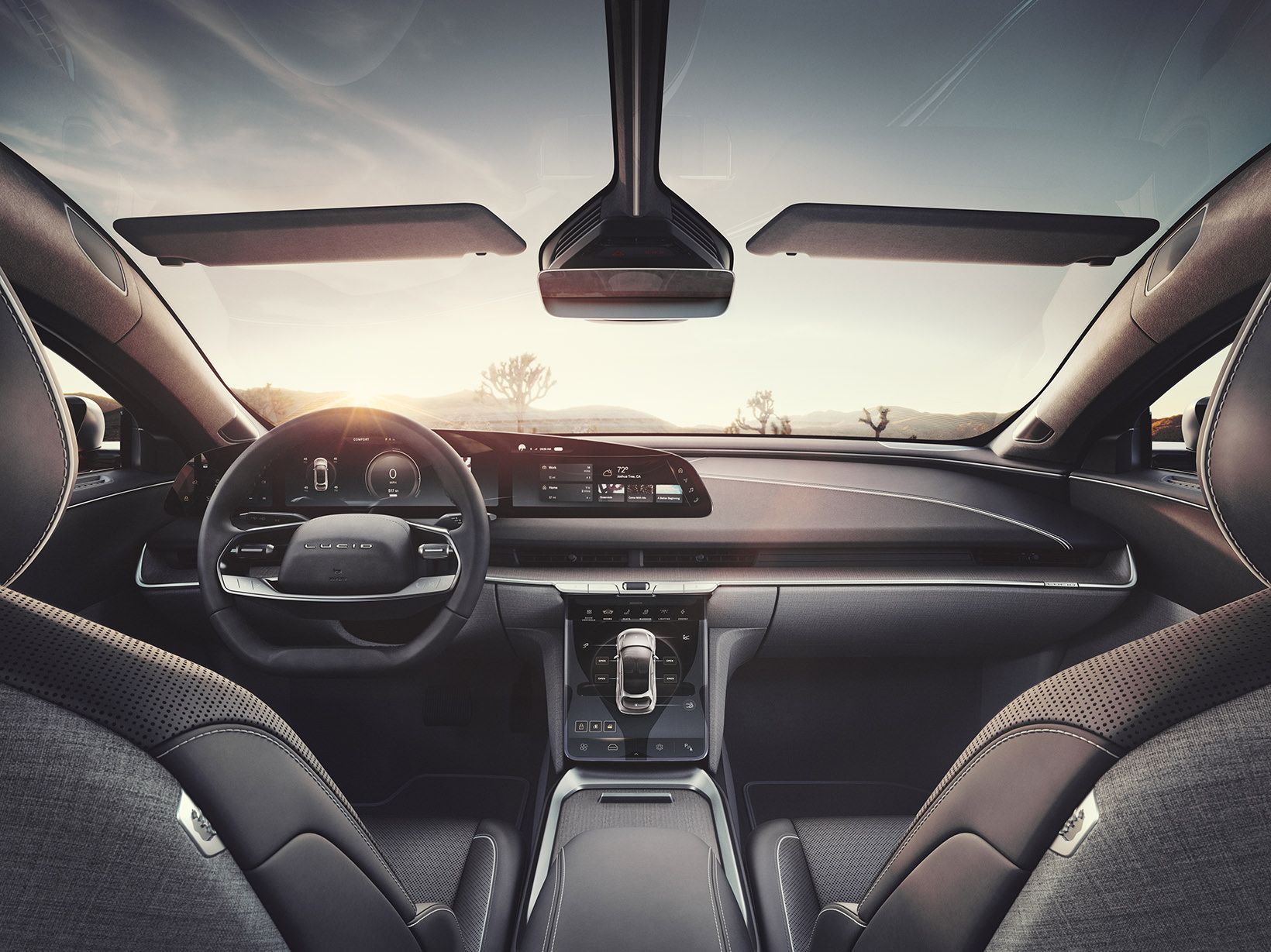 Inside, the Air’s cabin is both roomy and technologically advanced.

As for the driver, a massive, floating 34-inch curved digital cockpit is on offer, while a second touchscreen connects the dashboard with the centre console.

Lucid Motors vice-president of design Derek Jenkins said consumer preferences in the luxury car market are shifting towards a more environmental and progressive mindset, which the Air is ready to capitalise on.

“We are heading into a future where conscious consumers see sustainability, advanced design, and technical innovation as equally important to more traditional luxury values of quality and craftsmanship,” he said. 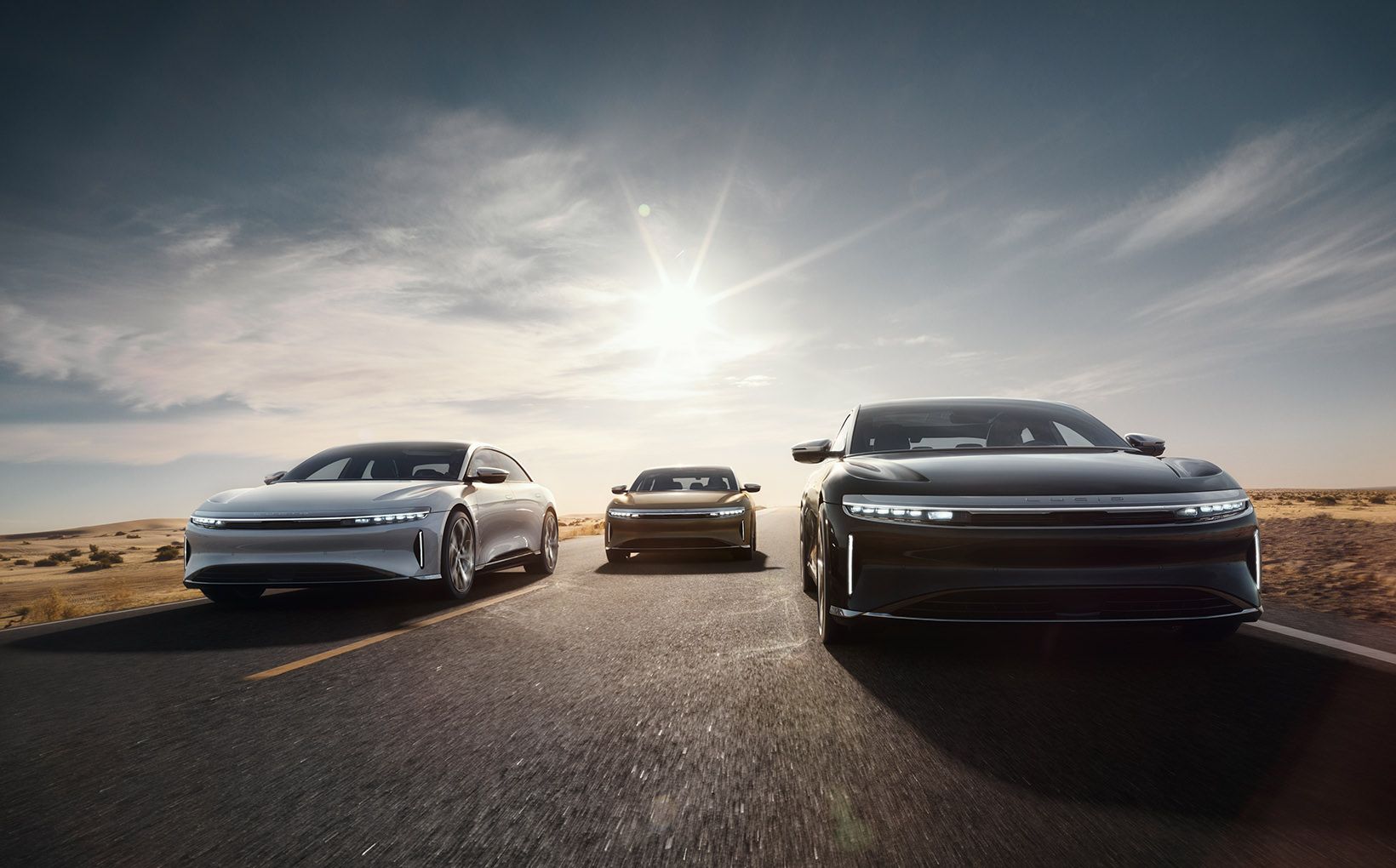 it remains to be seen whether the Air range will be offered in Australia.

“We consider Lucid to be at the forefront in a shift in consumer preferences toward new brands that offer direct relationships alongside products featuring entirely new levels of technology, performance, and design.”

The Dream Edition and Grand Touring will be the first grades released to the North American and European markets, with the Touring to follow at the end of the year and the base model in 2022.

While Tesla still rules the roost for performance EV sedans, its contenders are rapidly catching up.

The Hummer name is back as big and brash as ever, ...