One of the most recent crazes to sweep the automotive world has been the concept of the enhanced pick-up truck, with multiple car-makers taking their workhorses back to the drawing board to create something skewed far more towards play than work.

Models like the Ford Ranger Raptor, Nissan Navara N-Trek Warrior and Toyota HiLux Rugged X have been given both mechanical and styling upgrades to increase the appeal and capability of their donor models, and have been met with a generally positive reception.

However a new contender has shown up that blows all of the aforementioned pick-ups out of the water, with Ram Trucks taking the upgrades to a whole new level to create the savage, range-topping TRX. 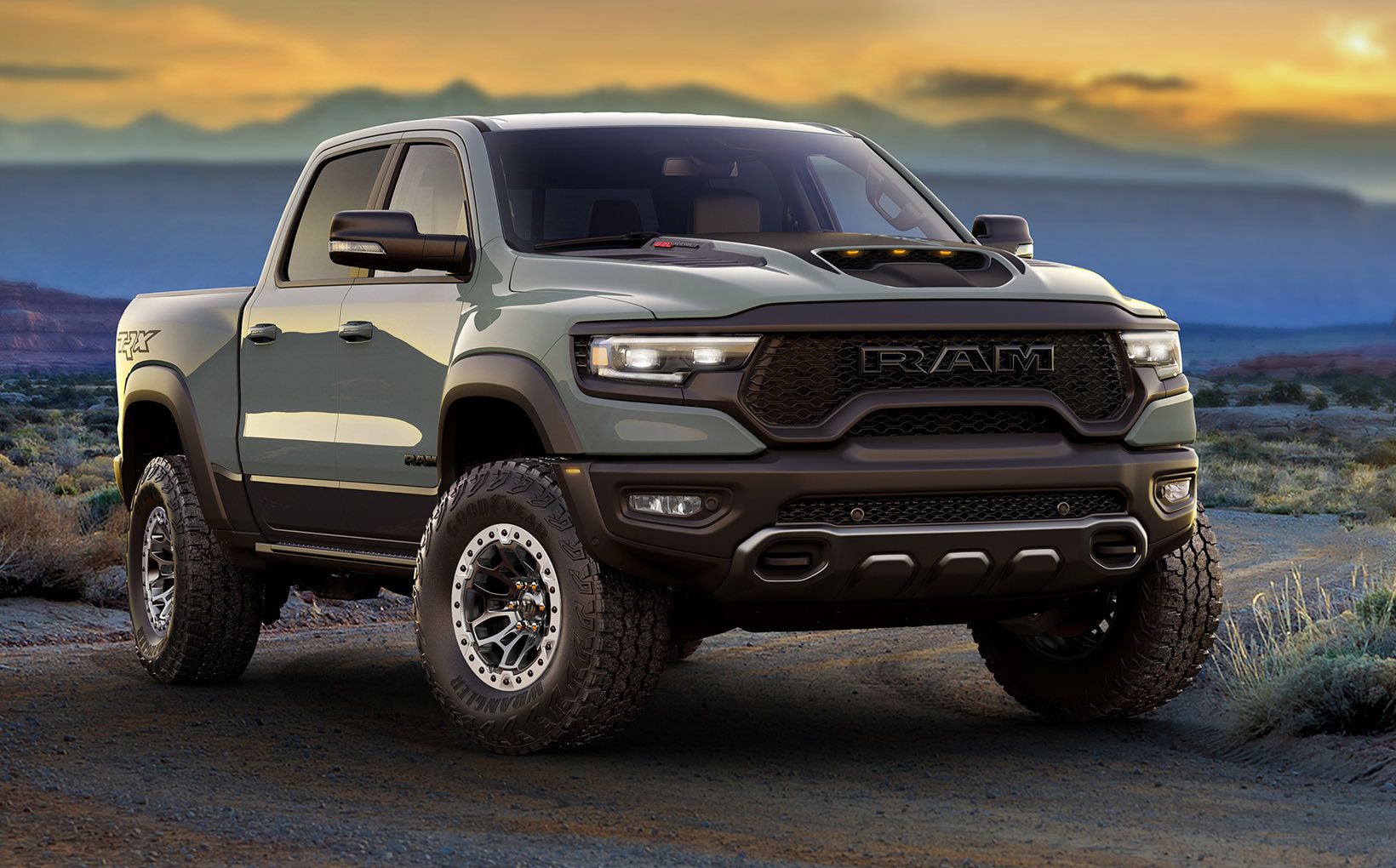 The Ram 1500 TRX is the brand’s take on an enhanced truck with both on- and off-road capabilities.

Current Australian examples of the 1500 can be had with a 5.7-litre V8 producing 291kW/556Nm, however the TRX replaces that mill with a 6.2-litre supercharged Hemi V8 capable of punching out a massive 523kW/880Nm.

Those enormous numbers would place it among the most powerful vehicles currently on sale in Australia, with most taking the shape of a track-honed coupe, not a full-sized, dual-cab pick-up. 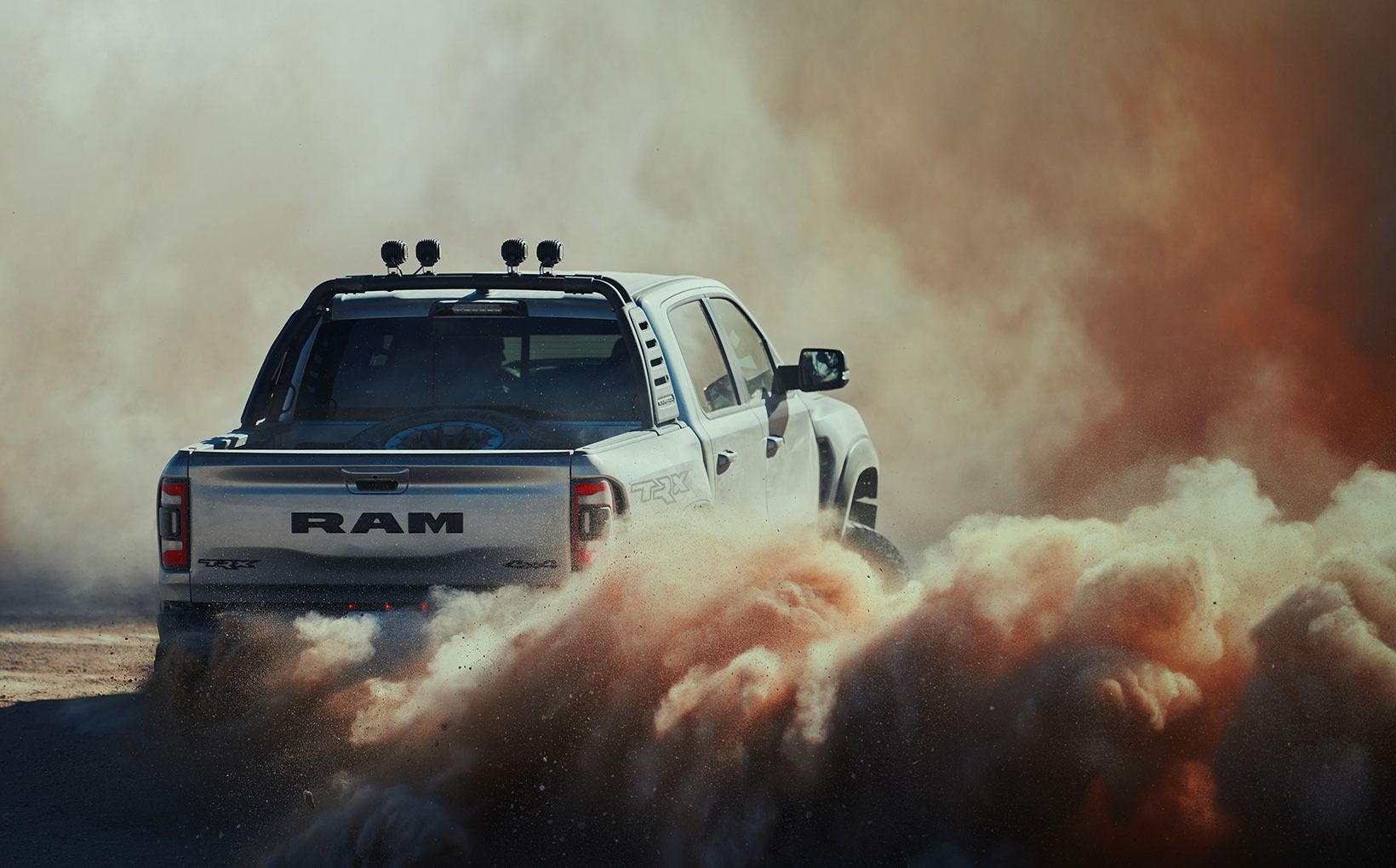 The TRX has been designed to leave other utes in its dust.

Drivers can select from five different drive modes – Auto, Sport, Tow, Snow and Custom – while for those who want to take the TRX off the tarmac, three off-road modes are on offer, comprising Mud/Sand, Rock and Baja.

Launch mode is also available to help the big hauler be the first off the line at the traffic lights. 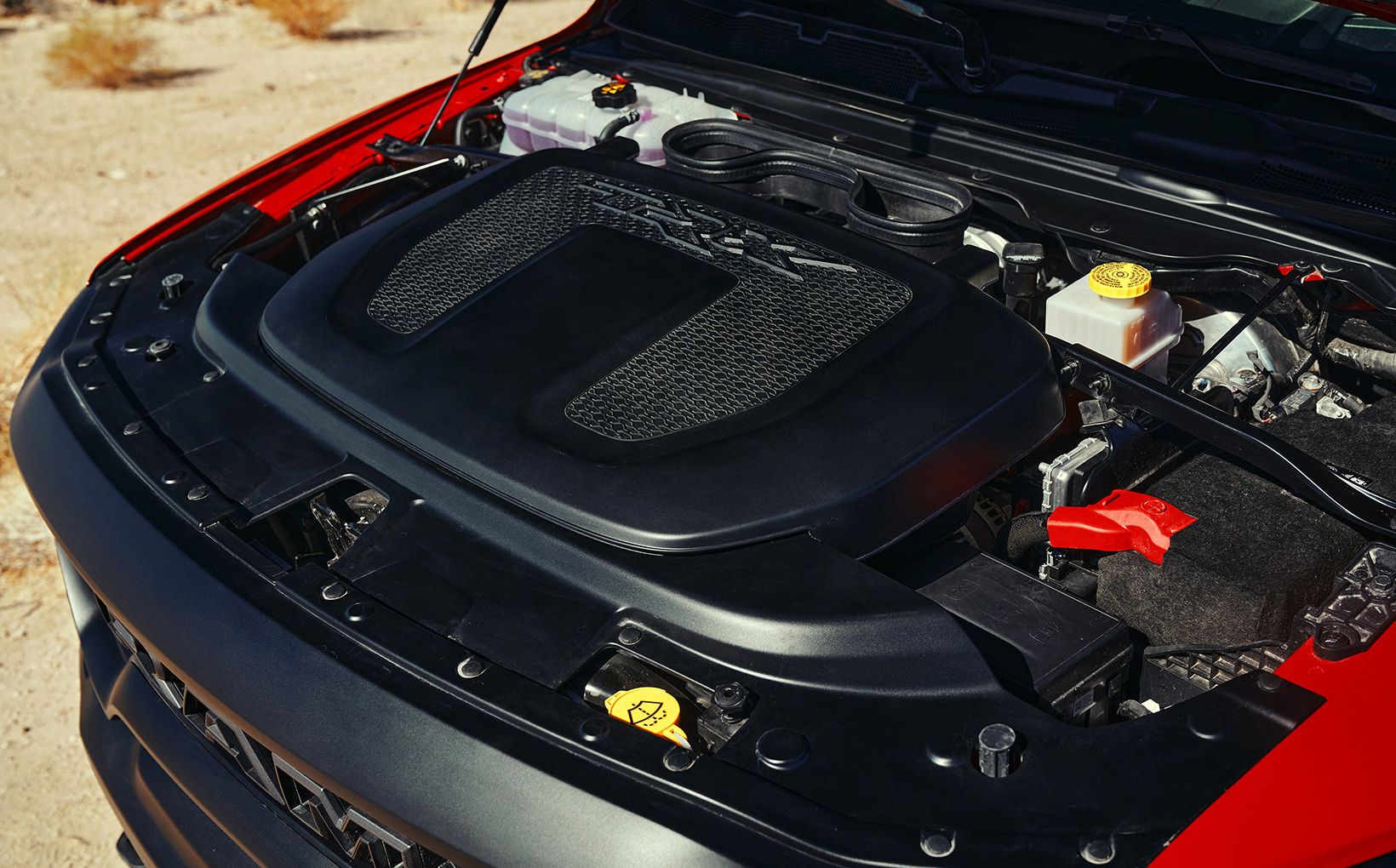 The aggressive hood scoop is only one of multiple visual enhancements Ram has made for the TRX, with other exterior cues including a larger, flow-through grille badge, functional air curtains sitting outside the LED headlights, chunkier fender flares and massive five-inch dual exhaust tips. 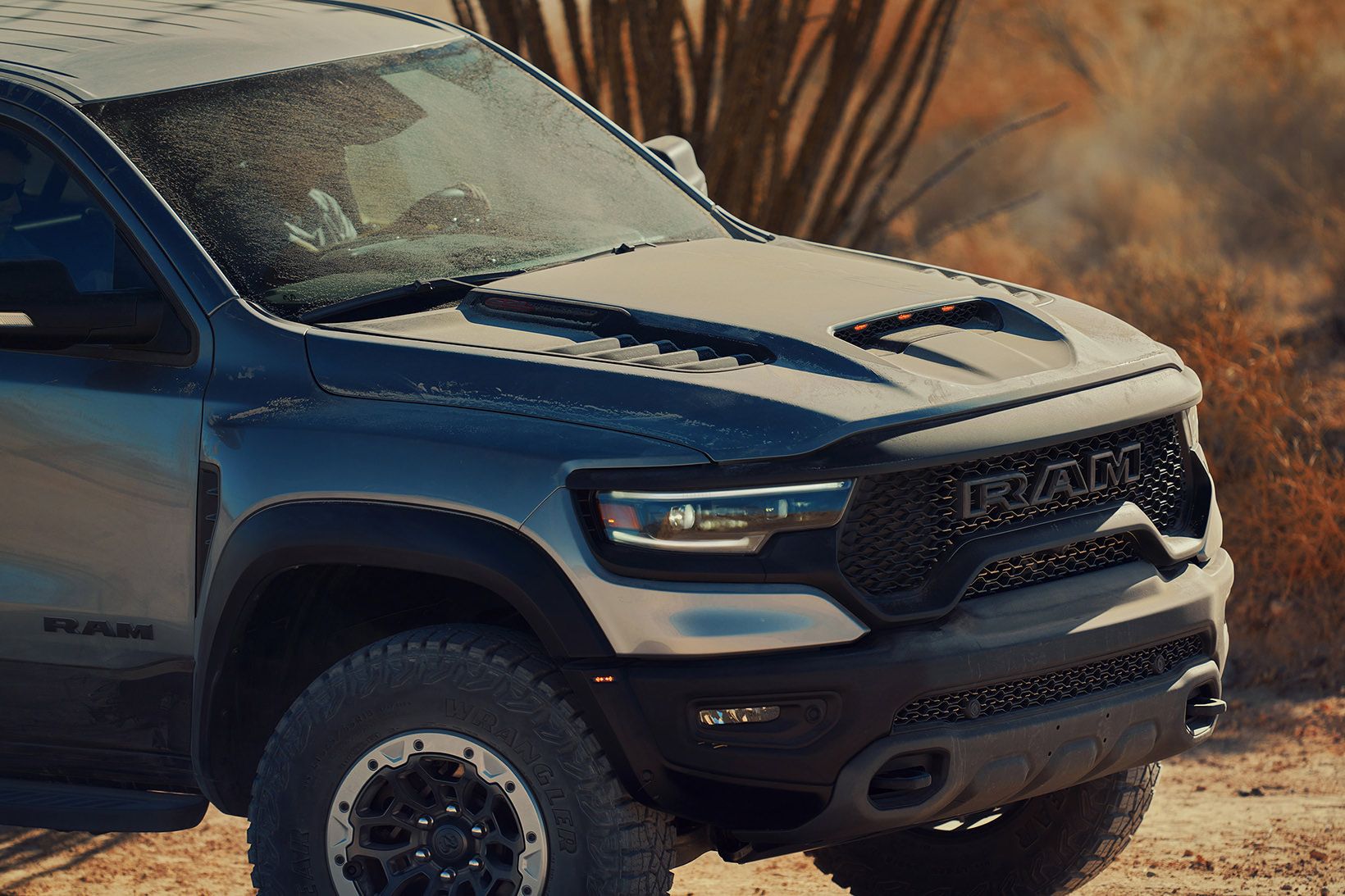 The functional hood scoop is one of many visual enhancements.

Compared to the standard 1500, the body of the TRX has been widened by eight inches with a six-inch-wider track, while the front axle has also been moved forward by 20mm.

Combined with a 2.0-inch suspension lift, the changes have been made to accommodate the chunky 35-inch Goodyear Territory all-terrain rubber, wrapped around 18-inch beadlock wheels.

Buyers can choose from full-length rock rails or powder-coated aluminium running boards, while side and hood graphics can also be optioned. 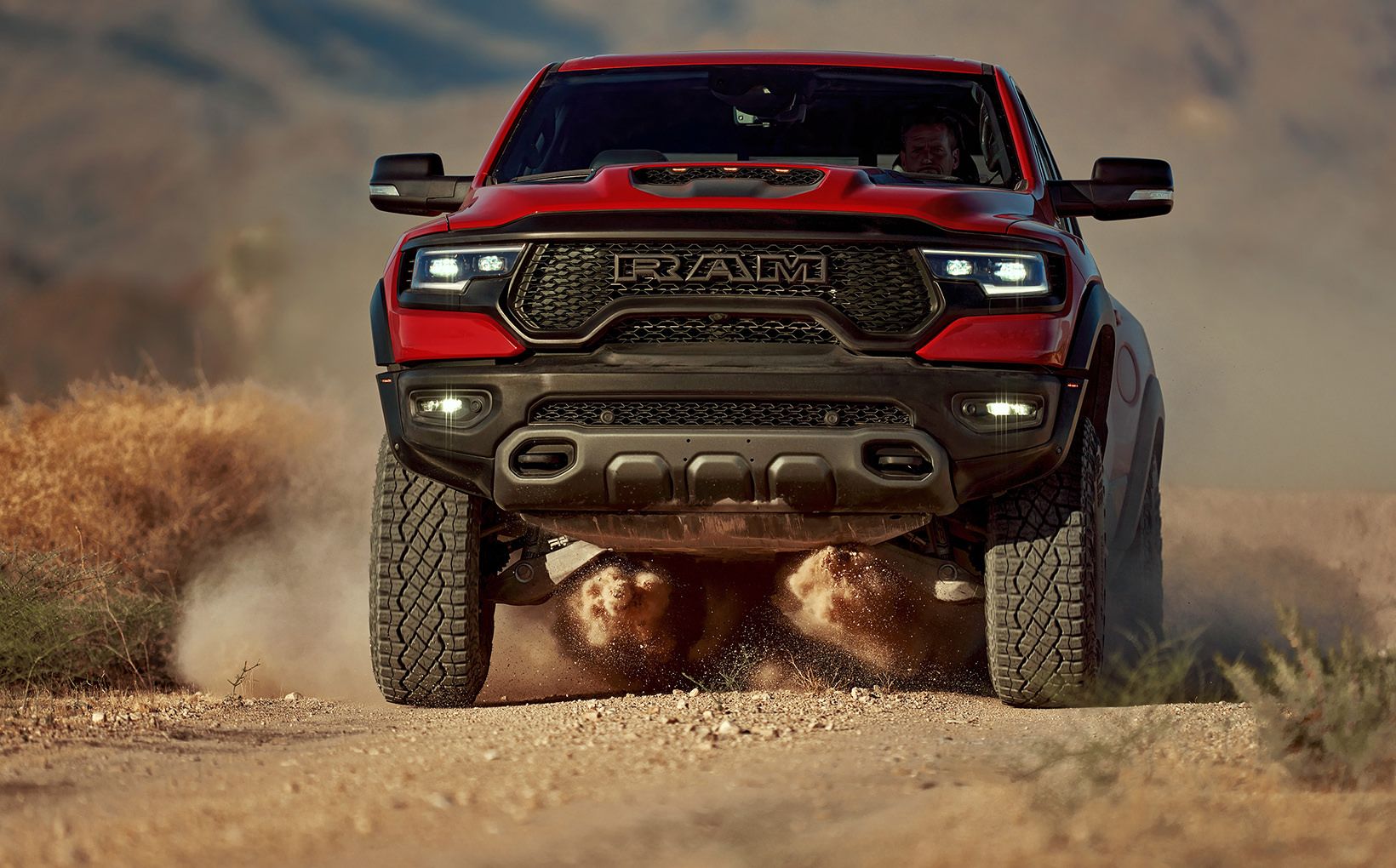 Like the Ranger Raptor and Navara N-Trek Warrior, the 1500 TRX has been made to be more capable in the rough stuff, with a thicker steel frame, five separate skid plates, a new independent front suspension system with adaptive damping, stronger control arms and upgraded components, and a new five-link coil rear suspension set-up with a Dana 60 rear axle.

Payload capacity is rated at 594kg, while braked towing capacity comes in at 3674kg.

Off-road performance is further aided by the fitment of a rear locking differential and a low-range transfer case with a 2.64:1 drive ratio. 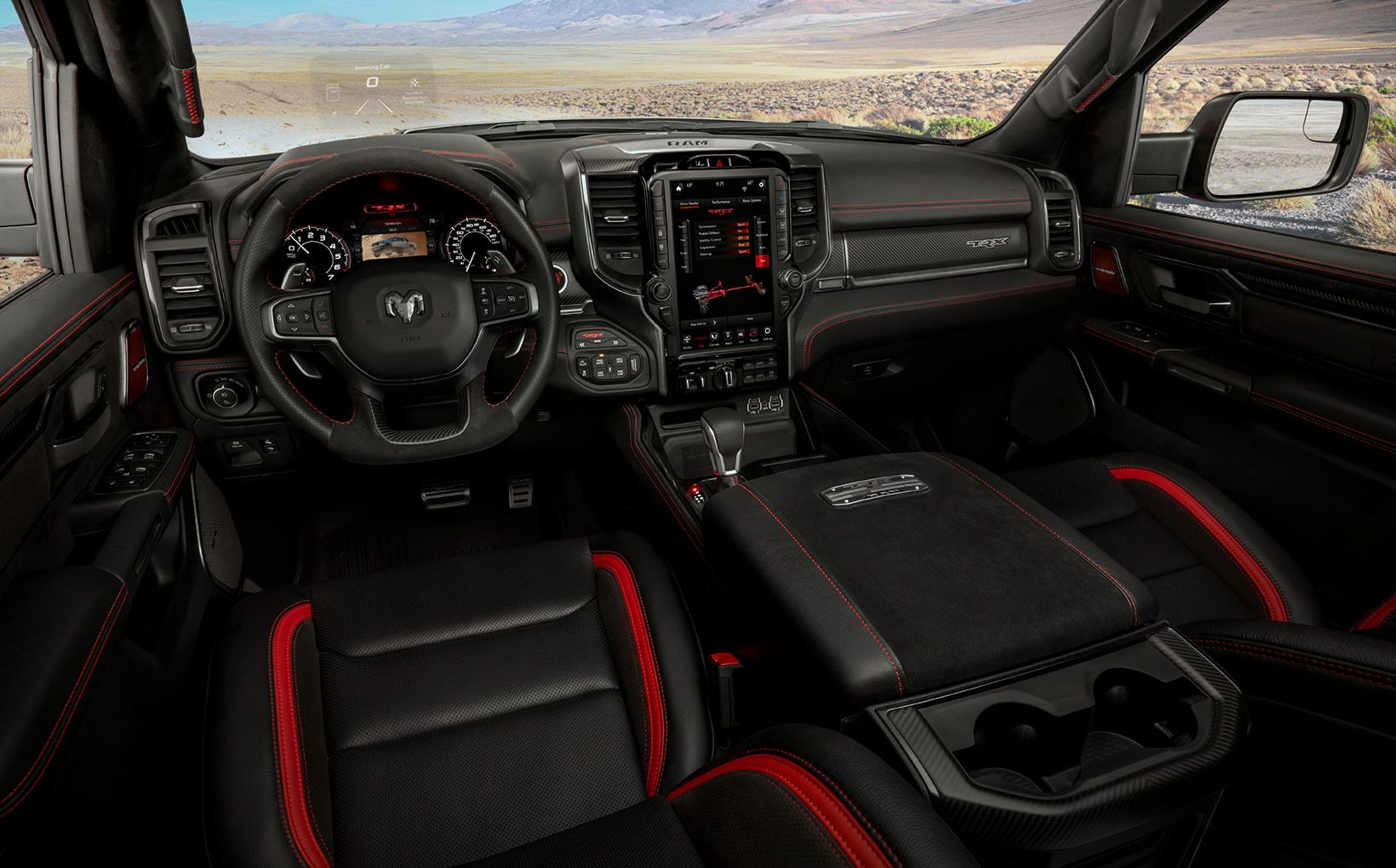 Buyers can choose from a range of interior upholstery options.

Moving inside the cabin, the TRX can be had with three different upholstery options consisting of cloth/vinyl, leather/suede and leather/suede with red and carbon-fibre accents.

Over 100 advanced safety and securing features come with the TRX, while a full suite of Mopar accessories are also available. 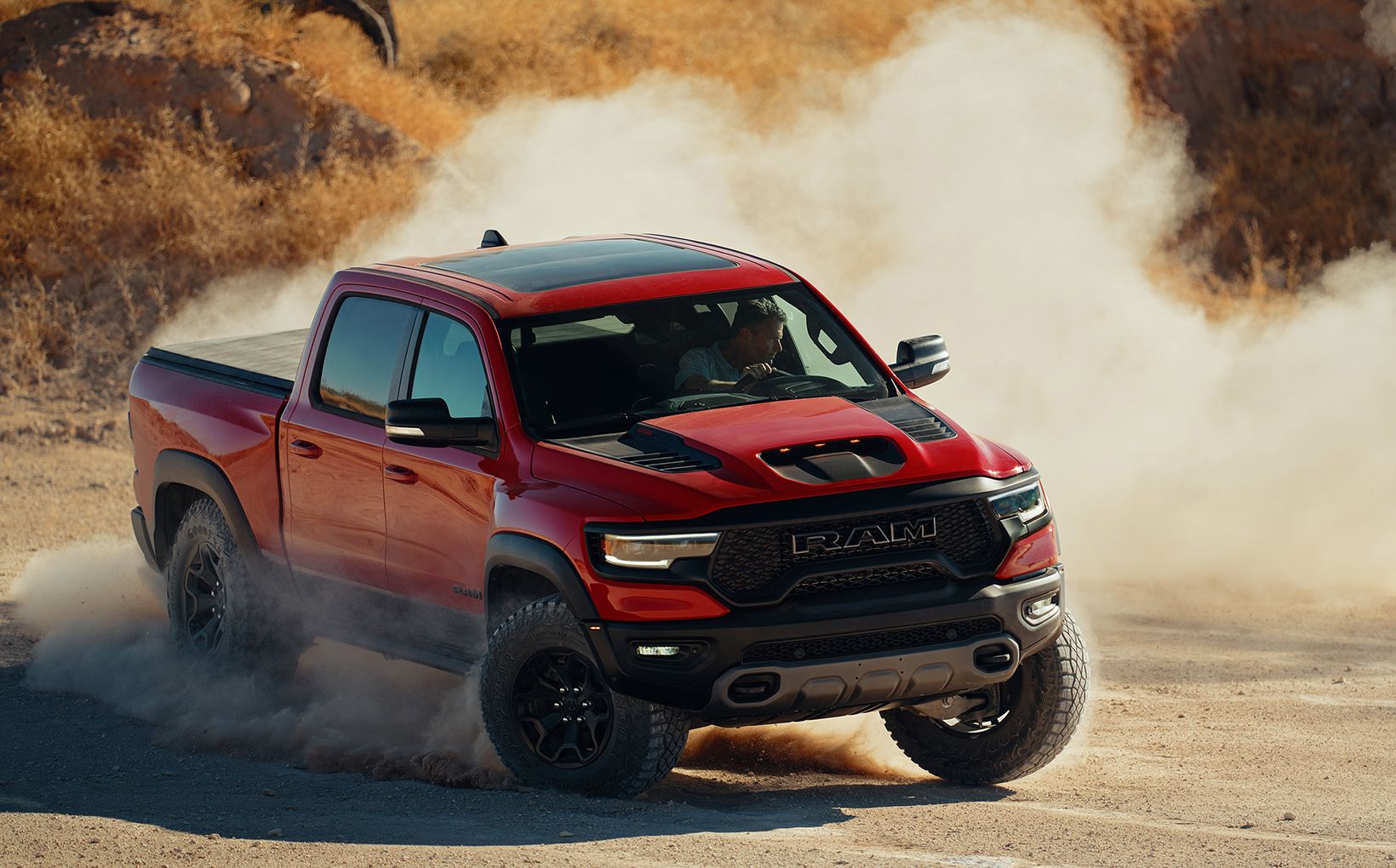 The 1500 TRX offers performance unlike anything else in the pick-up segment.

While the 1500 TRX is yet to be locked in for an Australian arrival, conversations between Ram Trucks Australia and its US head office are “progressing well”, with the company hopeful of securing the monster off-roader here albeit with no secure timeline in place.

If it were to come here, the Ranger Raptor and Navara N-Trek Warrior would surely have to concede that there’s a new sheriff in town – here’s to hoping some good news from Ram Australia comes sooner rather than later.

Protect your classic. Call Shannons Insurance on 13 46 46 to get a quote today.

Tradie Wars! Gloves are off as pick-up trucks step...

Does X mark the top spot for Mercedes’ pick-...