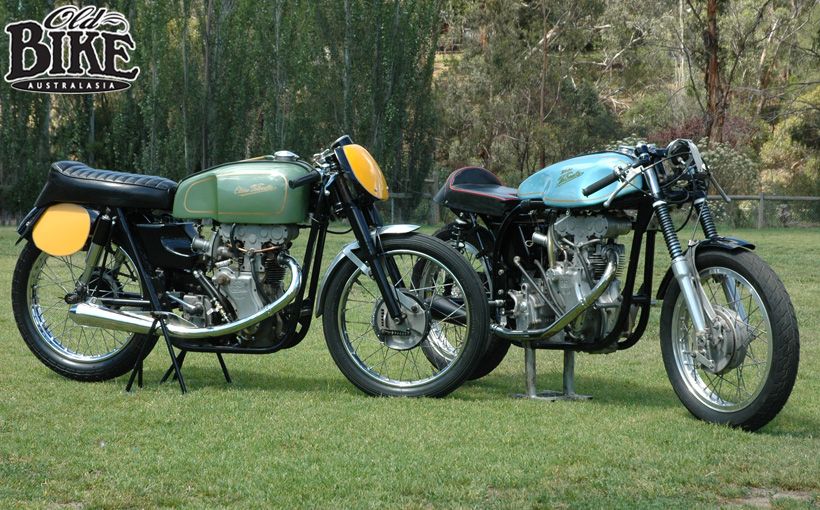 Edited from the original work by the late: Keith Hamilton

Born in Adelaide in 1921, Les Diener became the family bread winner, supporting his mother and two younger sisters at age 14 after his father fled town to escape debts. He found employment in an engineering machine shop and soon became a valued employee in the toolroom of Kelvinator Australia Limited on Anzac Highway Keswick in South Australia. 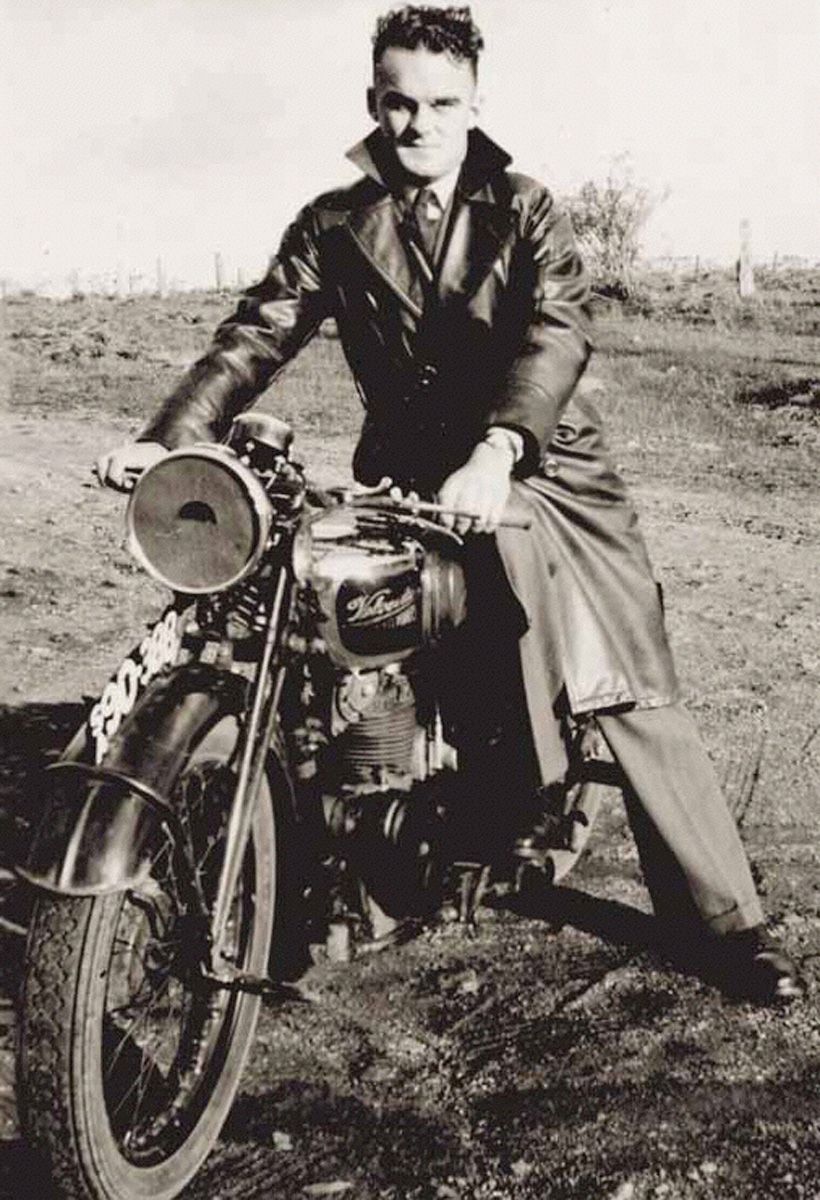 Around this time Les acquired a JAP V-twin. To us it was a huge powerful piece of machinery and we just had to get it running! I had also become apprenticed to the auto trade and managed to acquire an old Levis belt drive motorcycle which was thrashed around the paddock behind my home until we ran out of petrol. 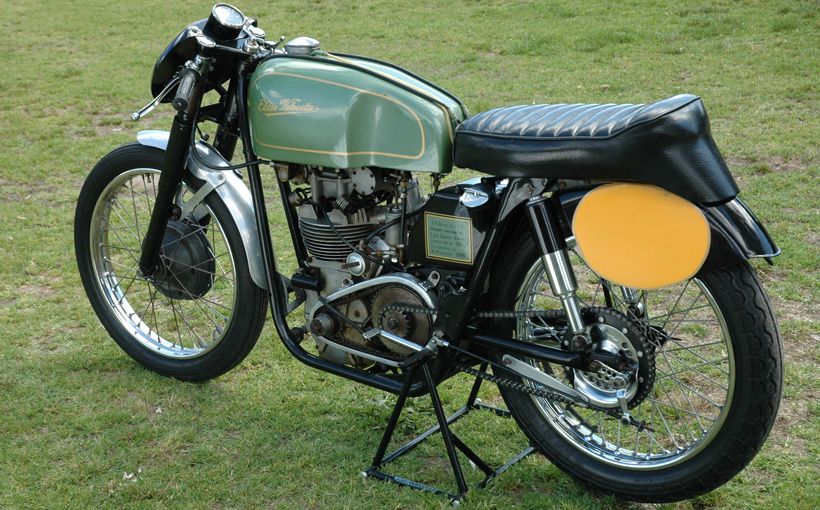 There was no place in Les's life for girls! His whole life was taken up with his passion for mechanical devices and he was forever making up new parts for the bike and working on improvements.  These times passed only too quickly and it was 1939 and WW2. We both attempted to join the fighting forces shortly afterwards but Les was firmly locked into wartime anti-aircraft production at Kelvinators, and his attempts to break away from munitions production were blocked at every turn. Then the war was over. Les had left Kelvinators and started a motorcycle business on Unley Road with a fellow enthusiast, Frank Tuck. The establishment was known as Clifton Motors, but more usually, Tuck and Diener, and it was here that I joined Les once more a few weeks after my discharge from the RAAF in March 1946. This was the time of the first post war TT races and we journeyed over to Ballarat for the Victoria Park events on New Years Day and again at Easter when Les rode his 250cc MOV Velocette which at that early stage was already a force to be reckoned with.  By this time he was in great demand for specialised racing parts and was fully active in the racing scene. 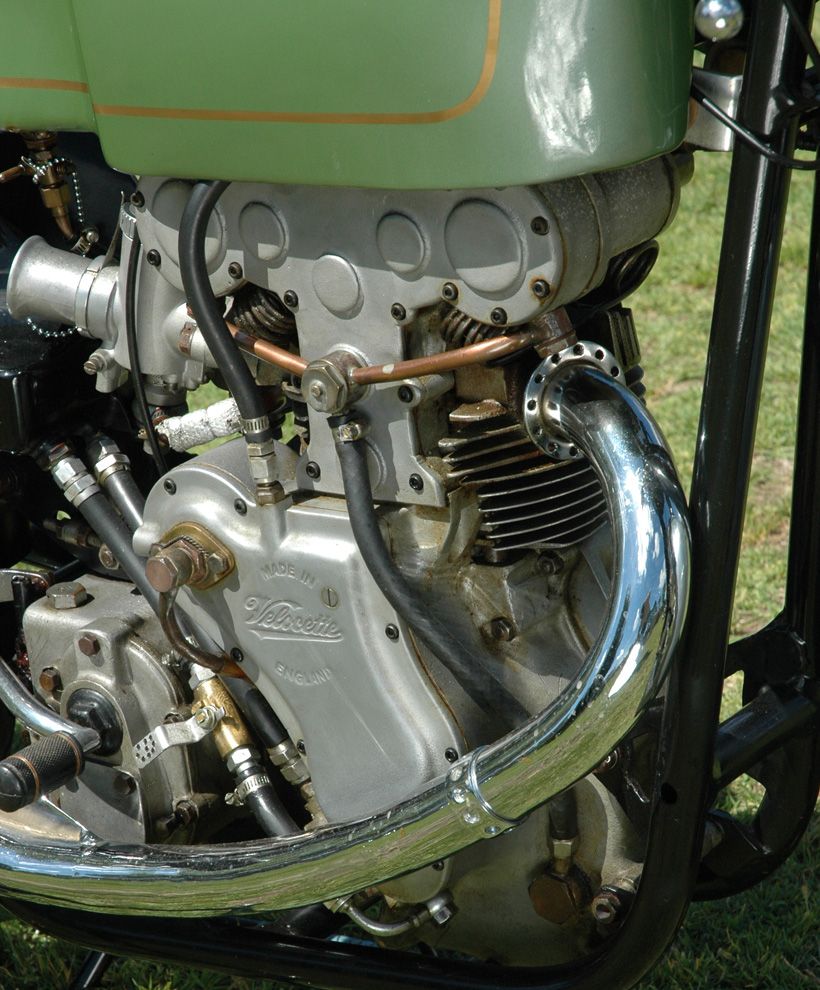 What became known as the Eldee Special began life as a 1936 250cc MOV Velocette, with 36,000 miles on the clock. Les acquired the machine in 1940, intending to go racing on it, but with the intervention of the war, the Velo was used as road transport until 1944, when it was converted for scrambles use. It was still in basically this trim when it was entered for the first post-war road race – the Victorian TT at Ballarat on New Year’s Day, 1946. Over the next few years, the MOV was increasingly developed into a potent and reliable little racer, bringing Les the Victorian TT at Ballarat in 1950 as well as state tiles in South Australia and NSW. Perhaps inspired by Sid Willis’ home-brewed DOHC 250, Les decided on producing his own double-knocker. The cylinder head and piston came from Ted Carey in Sydney, but the rest of the engine was built in Adelaide. A series of Velocette timing gears, nine in all and each carried on a double-row ball race, operated the twin overhead cams in a Benelli-style arrangement, with the inner timing case welded to the crankcases. A vernier adjustment on the final gear wheel allowed valve timing variation of three degrees. Camshafts were made from 60-ton steel, mounted on ball and roller bearings, with a short stellite-faced tappet between the cam and the valve. Solid mild steel flywheels were turned, along with chrome-moly mainshafts and a Symco conrod with a two-piece crankpin. The light-alloy gear-drive case and the cam case were spigoted into each other and bolted together, with the whole assembly mounted on the cylinder head studs. The exhaust valve was sodium-filled, with a chrome-moly inlet valve, both in bronze guides with 140-pound springs. A British Wellworthy Alfin barrel was used. Inside the timing case a mechanical breather was fitted, driven by the magneto spindle. Inside the gearbox were KTT ratios, with a standard Velocette clutch. 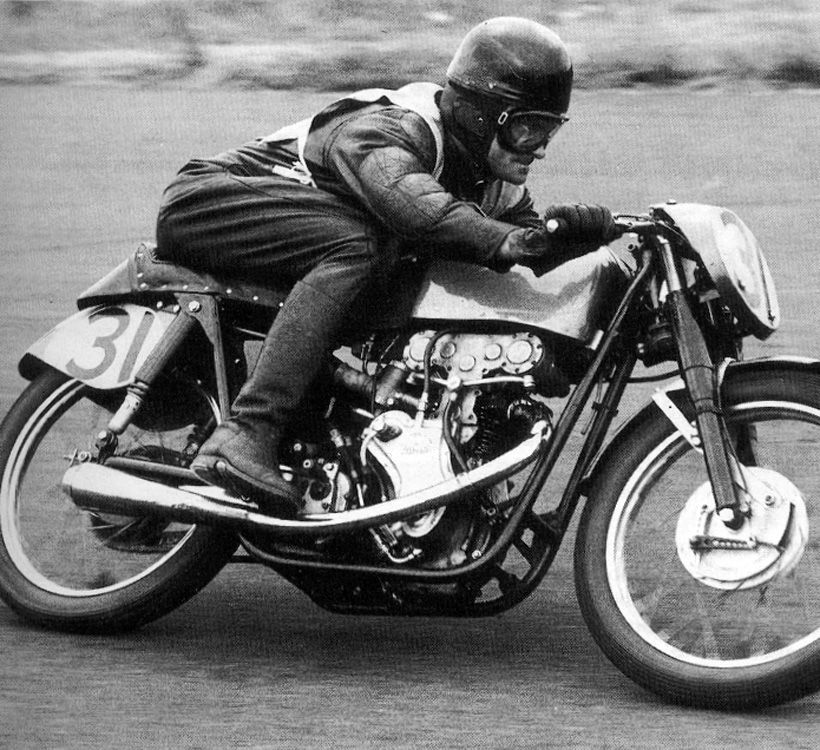 Les Diener on his own creation, the DOHC Eldee 250.

Still in the 1936 rigid frame, the new engine proved a winner from the start, notching up six title wins in a row, and the next development centred on refining the handling. The design was based on what Les considered the best features of several designs, with a Norton Featherbed-type double loop and the rear section and swinging arm modelled on the AJS 7R. The steering head design was copied from the Doug Beasley frame brought back to Australia by Sid Willis. The front forks were sourced from a BSA C10, shortened by four inches and fitted with Diener’s own design of hydraulic damping. Front brake came from an early KTT with a standard Velo rear wheel. A steel oil tank, again on 7R lines, was fitted, along with a four-gallon fuel tank constructed from hand-beaten alloy sheet. The new Eldee was an even more formidable device on the track, revving to 9,000 rpm, and with the addition of a glass fibre fairing built by Charlie Rice and Rob Edmunds, capable of an astounding 116 mph (186 km/h). In Diener’s capable hands, the Eldee racked up win after win, including the 1956 Australian TT at Mildura, but on Easter Monday, 1957 Les suffered a serious accident at Port Wakefield when the gearbox of his 350 Manx Norton locked up, leaving him with a broken pelvis.

The accident left him totally disillusioned with motorcycles, and he made a clean split, selling the Eldee to Ken Rumble, who took it to a fortunate win at Bathurst after leader Sid Willis retired on the final lap. Rumble continued to race the Eldee until 1961, when it was sold to the Riley brothers, noted sidecar racers, in Hamilton, central Victoria. It was there that the Eldee, and several other machines, was badly damaged in a fire in the Riley garage. After laying around and becoming something of a kids’ plaything, it was in a sorry state when Keith Hamilton began a rebuild for the Riley brothers in 1979. The rebuild took over two years, but try as he might, he could not get Les interested – at first. At the time of the fire, the fuel tank still contained alcohol, and was virtually destroyed, along with the carburetor and other alloy parts. Keith, a master with sheet metal, built an exact replica of the tank, salvaging the original filler neck, and after much painstaking work, Eldee was once again a runner. Hereafter the bike passed through a number of hands before being sold to the UK, where it remained briefly until purchased by noted Japanese Velocette collector Akihiko Kato. Far from a static exhibit, Akihiro-san raced the Eldee in Japanese classic events from time to time, but admitted to English ex-pat Humphrey Smith that it “didn’t really fit his theme”. Smith lost little time in contacting Franc Trento in Melbourne, and after some negotiations and a not inconsiderable amount of money changing hands, the Eldee arrived back in Australia in March 2008. 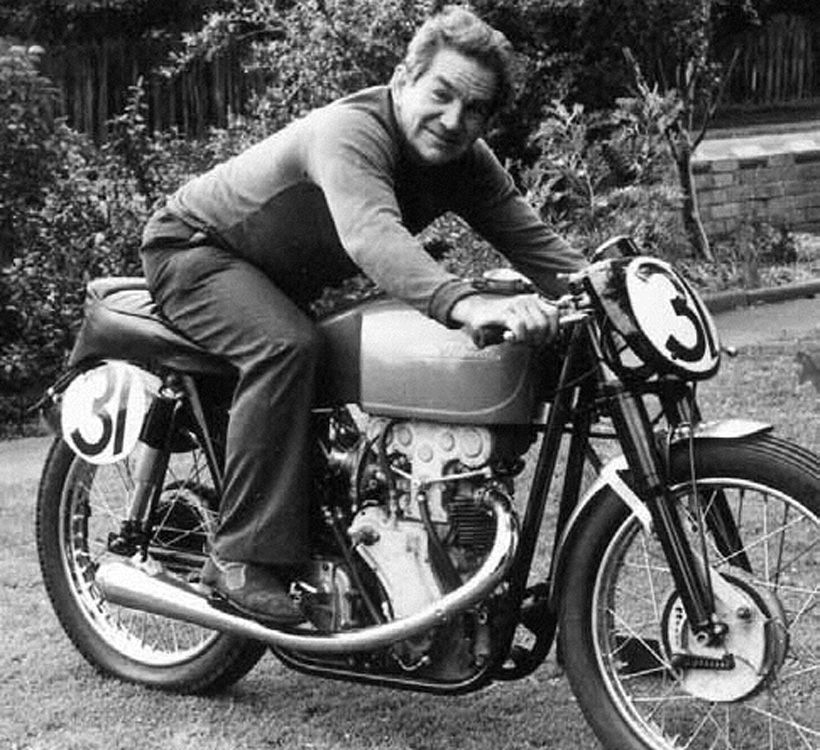 Keith Hamilton with Eldee 1, which he restored from a wreck in 1979.

At this point, we return to Les Diener, who had gradually succumbed to Keith Hamilton’s invitations to get involved in the rebuild of the Eldee. He was even coaxed into doing a few laps on a Manx Norton at a club race day, and by the time he pulled into the pits, the old flame was burning again. When Keith donated a heap of spare MOV and MAC parts for Les to fiddle with, the die was well and truly cast, and the idea of constructing a second DOHC Eldee formed. Fortunately, the original patterns were still in Adelaide in the hands of Peter Westerman, and in 1987, work began on what became Eldee 2. The inspiration came about after Les was invited to the Historic Racing Festival at Pukekohe and managed to obtain another Carey head. It was all he needed to fire the enthusiasm, and for the next two years, Les, now retired, could be found in his small workshop toiling away. Externally, the new machine’s engine looked identical, but inside, there were several changes, including a titanium conrod running a German INA bearing and a US-made Arias piston. Instead of making the timing gears from scratch, modified BSA cogs were employed. A new drive-side crankcase, with extra strengthening ribs, was cast in CP601 alloy by Adelaide foundry Castech, who also did the valve gear cases and covers, hubs, brakes and fork yokes. Speedway Jawa valves with S&W coil springs replaced the hairpins used on the original Eldee. Inside the magneto, Les modified the armature to accept an electronic triggering device from a Mitsubishi car, powered by a small 12-volt battery with a Yamaha coil. The Norton Featherbed frame and fork legs came from a batch of parts that Keith Hamilton brought back from Malaysia, with the rear section cut off and replaced to give a lower seating position. Keith also made the steel oil tank. With the second Eldee, Les took to the tracks again at the age of 68, and showed he could still cut it with the younger blokes in the Historic Racing ranks, winning many races at Mallala and Mt Gambier. 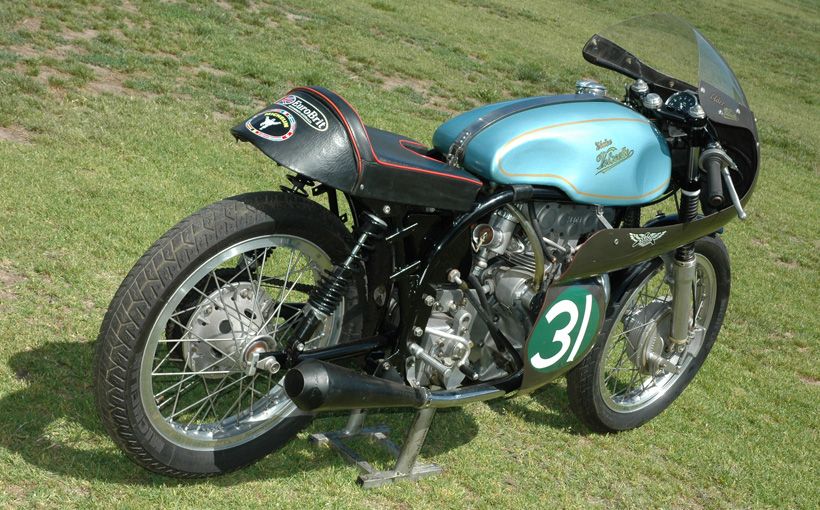 Eldee 2, a much more modern machine, completed by Les Diener in 1987.

Keith Hamilton, who spent considerable time working in South East Asia, brought back numerous bikes and parts, among them a 175cc Gilera, which he restored. The process seemed to spark some interest from Les, and when the bike was finished, Keith gave it to his old friend. On Wednesday 16th November 1994 whilst riding the Gilera on the South- East Freeway, Les apparently suffered a heart attack and died. He was 73 years of age. 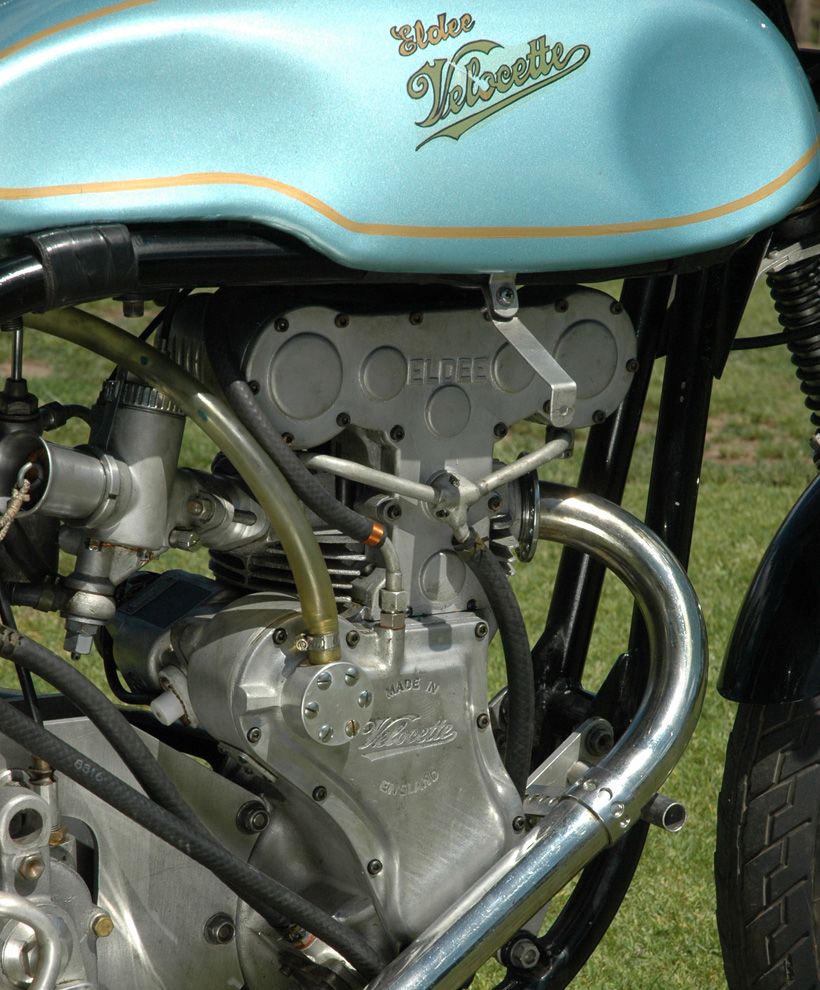 Following Les’ death, Eldee 2 was also acquired by Franc Trento, who ran the bike on several occasions, before selling it to Phil Price in New Zealand. The original Eldee was sold to Motorcycling Australia where it forms part of the Museum & Heritage collection.

Protect your Classic Bike. Call Shannons Insurance on 13 46 46 to get a quote today.