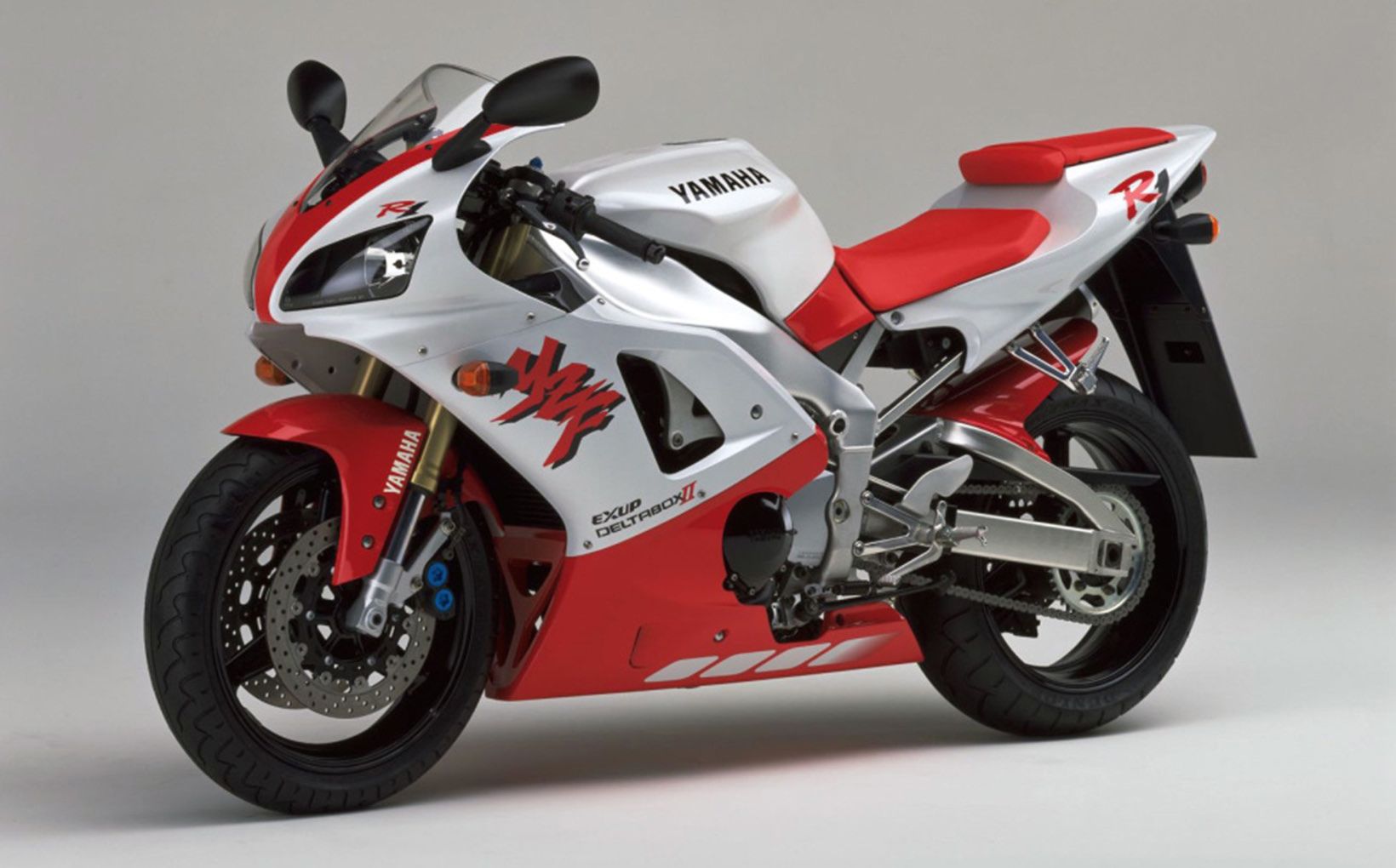 The Yamaha YZF R-1 is undoubtedly one of the great motorcycles of the final years of the twentieth century. Along with peers such as the Suzuki Hayabusa and the original 1992 Honda CBR 900 RR Fireblade, it redefined the parameters of a whole category, in this case one-litre sports bikes.

If the Fireblade effectively launched the category, the R-1 took this to the next level just half a decade later. Yamaha’s advertising headlines told the tale well:

The copy then continues:

When engineers design a motorcycle, they work to strict design parameters for that class of machine – such as engine and suspension configuration, materials and budget. Not this time. In designing the R-1, we gave our project team three goals, and let them create the machine they longed to create, a 1000cc sports bike engineered without compromise.

Nevertheless, for those unfamiliar with the motorcycling world, the R-1’s advantages over its rivals might look minor. For example, the 1998 Honda CBR 900 RR Fireblade weighed 179kg (just two more!) and the Kawasaki ZK-9R Ninja hardly seemed gross at 183kg. As for power, the Ninja made 145 brake horsepower at 11,000rpm, compared with the Yamaha’s 150 at 10,000. Yes, the R-1 did have the shortest chassis in its class but only if that class is confined the Japanese machines; the Ducati 996SPS was five mm shorter in the wheelbase! 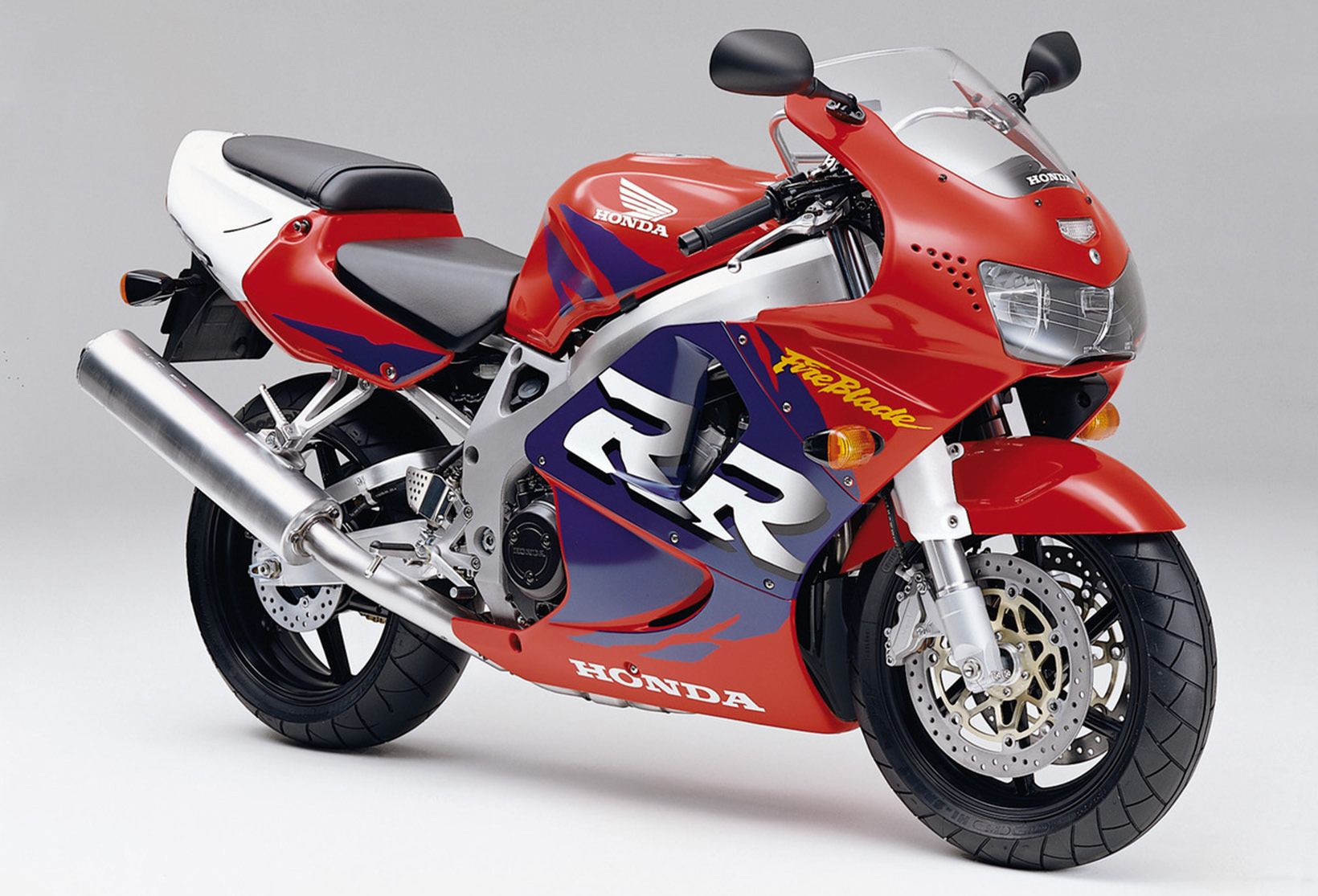 The reigning sports bike champion in 1997 when the R-1 made its debut was Honda’s CBR 900 RR Fireblade. The Yamaha’s extra capacity was a big factor, but it was also fractionally lighter when every kg counts.
Image: https://en.wheelsage.org/

The story grows more interesting – and the YZF R-1 more radical – when you look beyond the simple figures to the engineering story. Because the gearbox mainshaft is above rather than in-line with the crankshaft (for a vertically stacked gearbox), the engine itself is considerably shorter, which allows for a longer Grand Prix-style swingarm for superior traction. The in-line four was also remarkably light at 63.5kg. So, the R-1’s brilliance was not so much to do with the shortness of its wheelbase – which could have been even shorter again were it not for that special swingarm – but in the configuration of its mechanicals.

The R-1’s predecessor, the somewhat under-achieving Thunderace, is best seen as merely the starting point for the newcomer. Its engine weighed 73kg and was 81mm longer. If the Thunderace was a starting point, making a superior machine to the Fireblade was always the goal.

Despite retaining some Thunderace elements, the R-1’s powerplant essentially began on the proverbial clean sheet of paper, which allowed the engineers to develop some outstanding new design features. This 998cc DOHC unit featured five valves per cylinder. A one-piece cylinder and upper crankcase assembly added not only lightness (to invoke Colin Chapman!) but strength, sufficiently so that the engine itself could be counted upon as a stressed member to the chassis, meaning the frame itself could be lighter. Yamaha, having conceived a new way of electro-plating the cylinder bores, sought and gained a patent for it. Forged pistons, carbonised lightweight conrods and a thin-web crankshaft all contributed to a superbly smooth-running and torquey engine.

Both the water pump and the starter motor were integrated into the crankcases.

The engine itself is nothing short of extraordinary. It pulls so very cleanly all the way from 2000rpm and gathers momentum through a strong midrange to a useable and adrenalising top end. To give you some idea just how powerful this engine is, with the throttle held anywhere past ¾ the front wheel starts to lose traction from as low as four grand on the tacho – despite the trendy swing-arm, continuing to move upwards in a beautifully crested arc all the way to flipping point about four thousand rpm later. 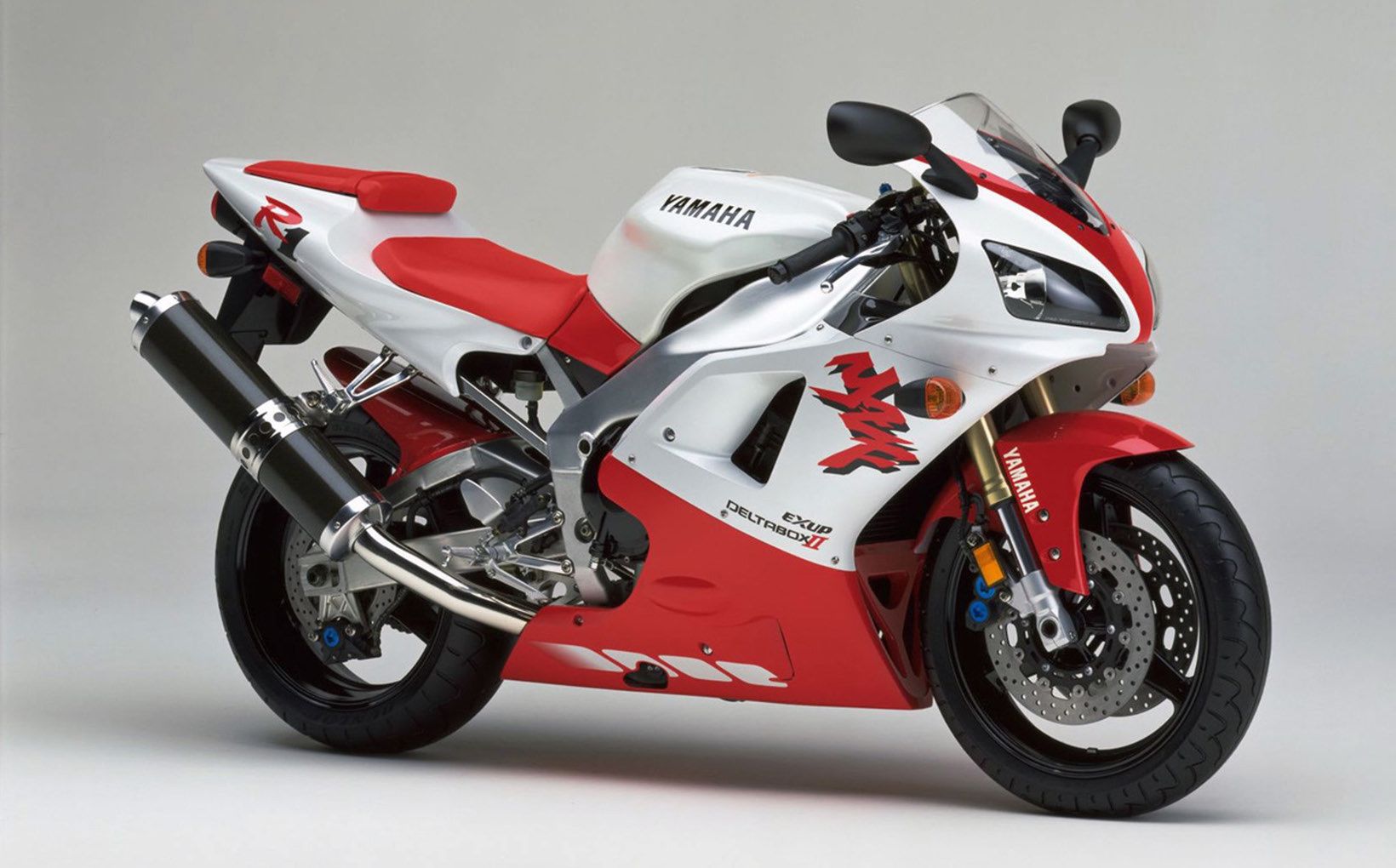 How could you resist this red and white beauty with that distinctive red seat?
Image: https://en.wheelsage.org/

The 1997-98 R-1 was offered in two colour combinations – red and white with an alluring red seat, or blue.

This new flagship sports bike was so immediately popular, that Yamaha executives saw no reason to make many changes for model year 1999. The gearshift linkage was revised so that racers could adopt a one-up/five-down pattern) and the colours and graphics were different; the bold red seat was already history!

Some reports mention some difficulty in getting the original R-1 to turn in. There is even some mention of instability. But very few criticisms were made of the bike in contemporaneous road tests; the negatives mainly came later when the bike had been made even better! 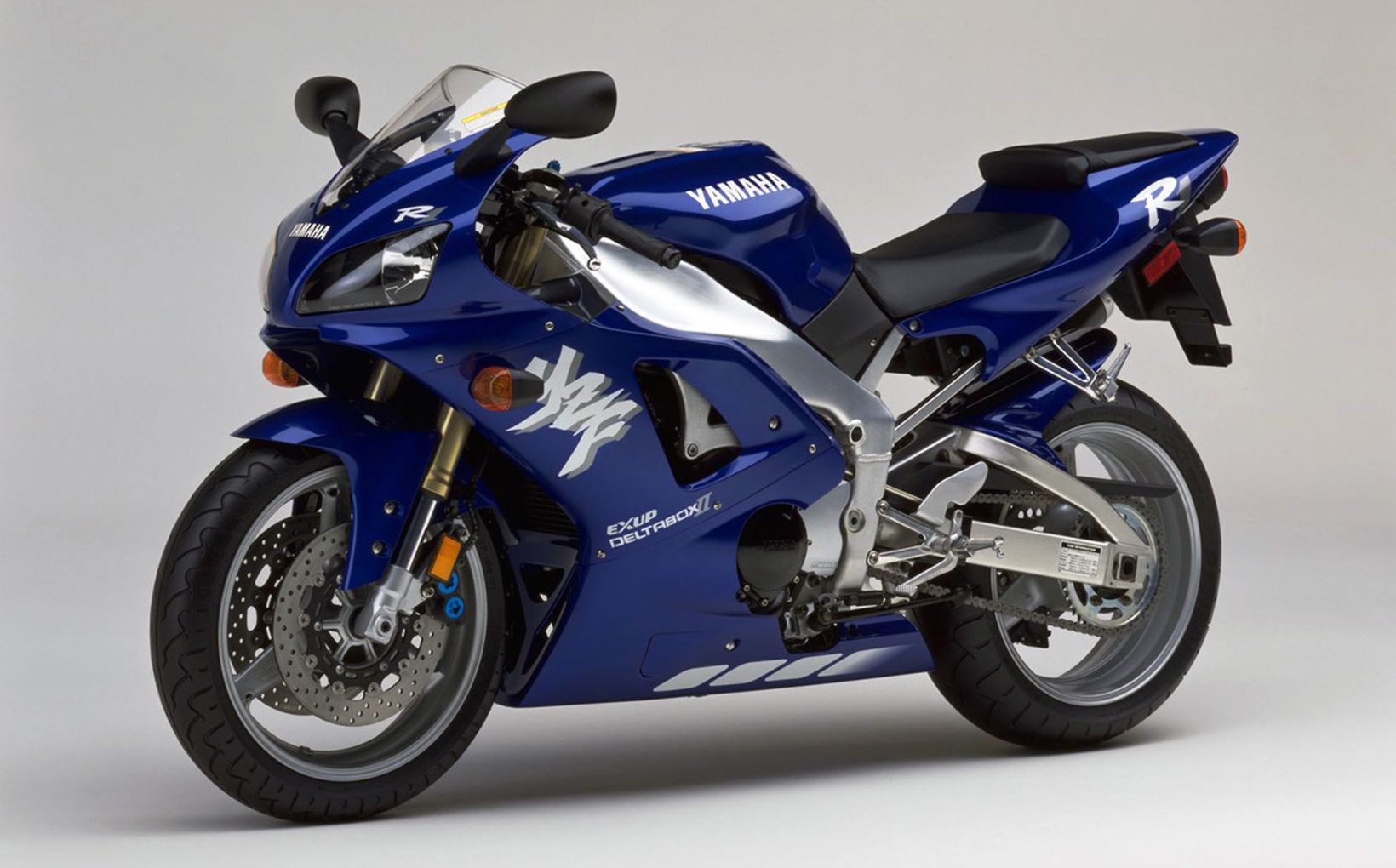 Or you could have a more conservative blue R1, as favoured by UK buyers.
Image: https://en.wheelsage.org/

A key to understanding the character of the original YZF R-1 is its manufacturer’s insistence on the term ‘without compromise’. For example, at the international launch, journalists were warned:

Yamaha build R-1 without compromise. It’s not so good for town riding or taking pillion. It’s a supersports bike, that’s all.

The consensus among the world’s motorcycling journalists was that throughout its two years on the market, the original R-1 remained the benchmark 1000cc sports bike, even though its Japanese rivals made gains. And the changes made for model year 2000 were mainly intended further to reduce weight. Even taking five kilograms away proved a challenge for the engineers. Mark Hoyer, writing in the March 2000 edition of Cycle World summed this process up well:

Thumbing through the press materials, the five-pound weight loss looks hard-won – you know, how hard it is to lose that last five pounds! Obvious light items are the titanium exhaust can and a pair of magnesium side covers, one for the shift shaft, the other for the pick-up coil. Exotic materials are the short, if sometimes expensive, way to light weight. But every other little thing counts. The tenth of a millimetre shaved off the fork-spring-wire diameter, for instance, or the reduced number of buttons (was 10, now eight) and thinner discs on the front brakes. Or the once-cast but now-forged (for lightness, of course!) rear shock body that also features a lighter-weight spring. Or the lighter, thinner tach. Or the smaller rear brake master-cylinder reservoir. Or the smaller starter motor. Or the increased number of hollow bolts peppered about the bike. Or the five bolts that hold the gas cap in place of the seven used before. All this for five pounds? Not exactly. The net loss was actually nine pounds, but the necessary addition of an air-induction system to clean up exhaust emissions ate four of those. ‘Ouch!’ said the army.

Additional changes included a revised gearshift and a taller first gear. A redesigned fairing and sharper nose brought a three per cent reduction in the coefficient of drag. The rear sub-frame boasted a steeper angle for improved rider support under hard acceleration. The screen was raised. 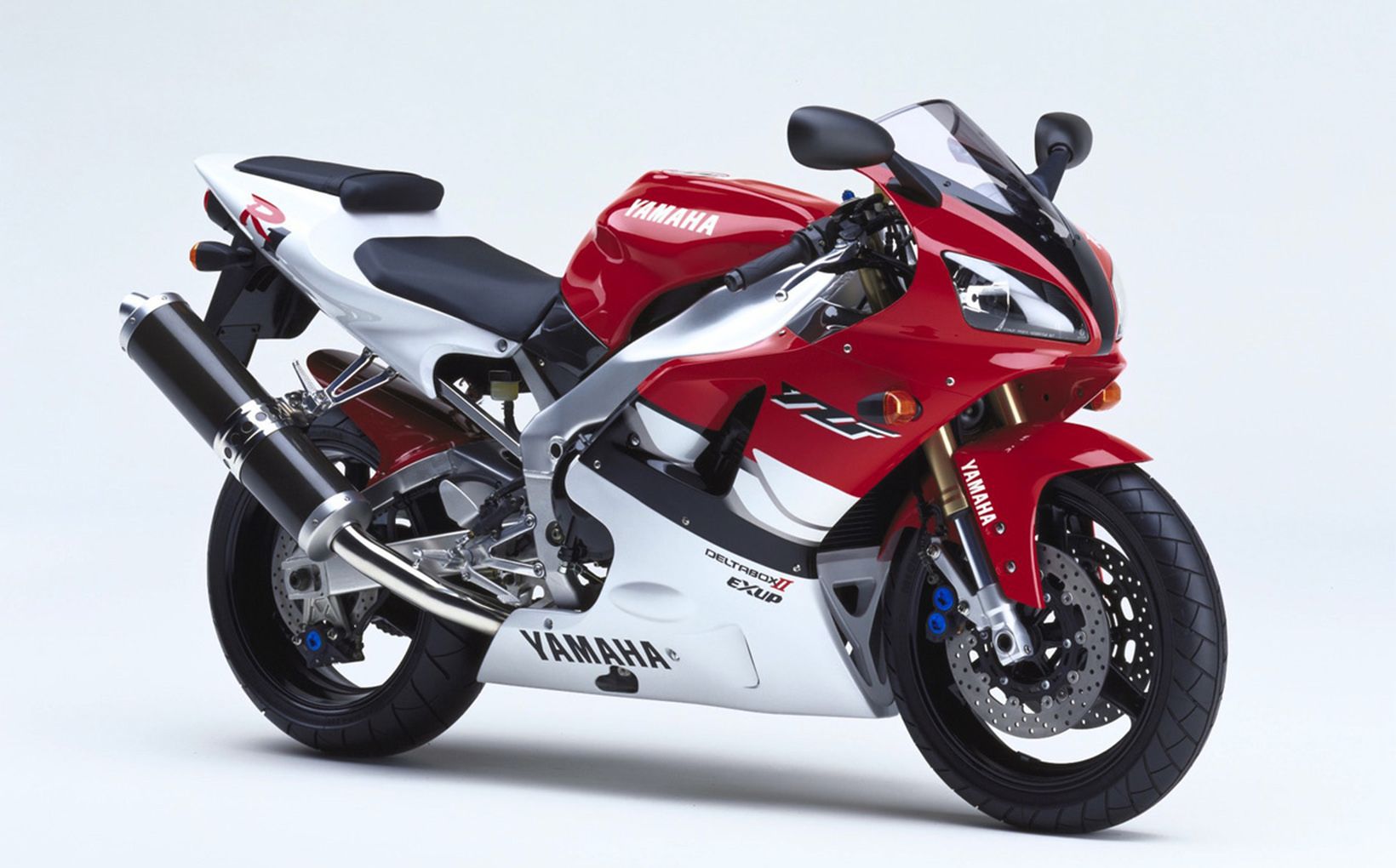 The 1999 R-1 was visually unchanged except in paint and graphics; the lovely red seat was gone.
Image: https://en.wheelsage.org/

Colour choices were still red and blue, although different and called Red Cocktail and Blue Metallic.

Shrink-wrapped horsepower, leaping frantically from corner to corner, as happy diving to the apex as launching off. Brutal, yet manageable, not some unwieldy beast to ride, yet it performs like an absolute monster. It’s proof that there is no such thing as too much performance. 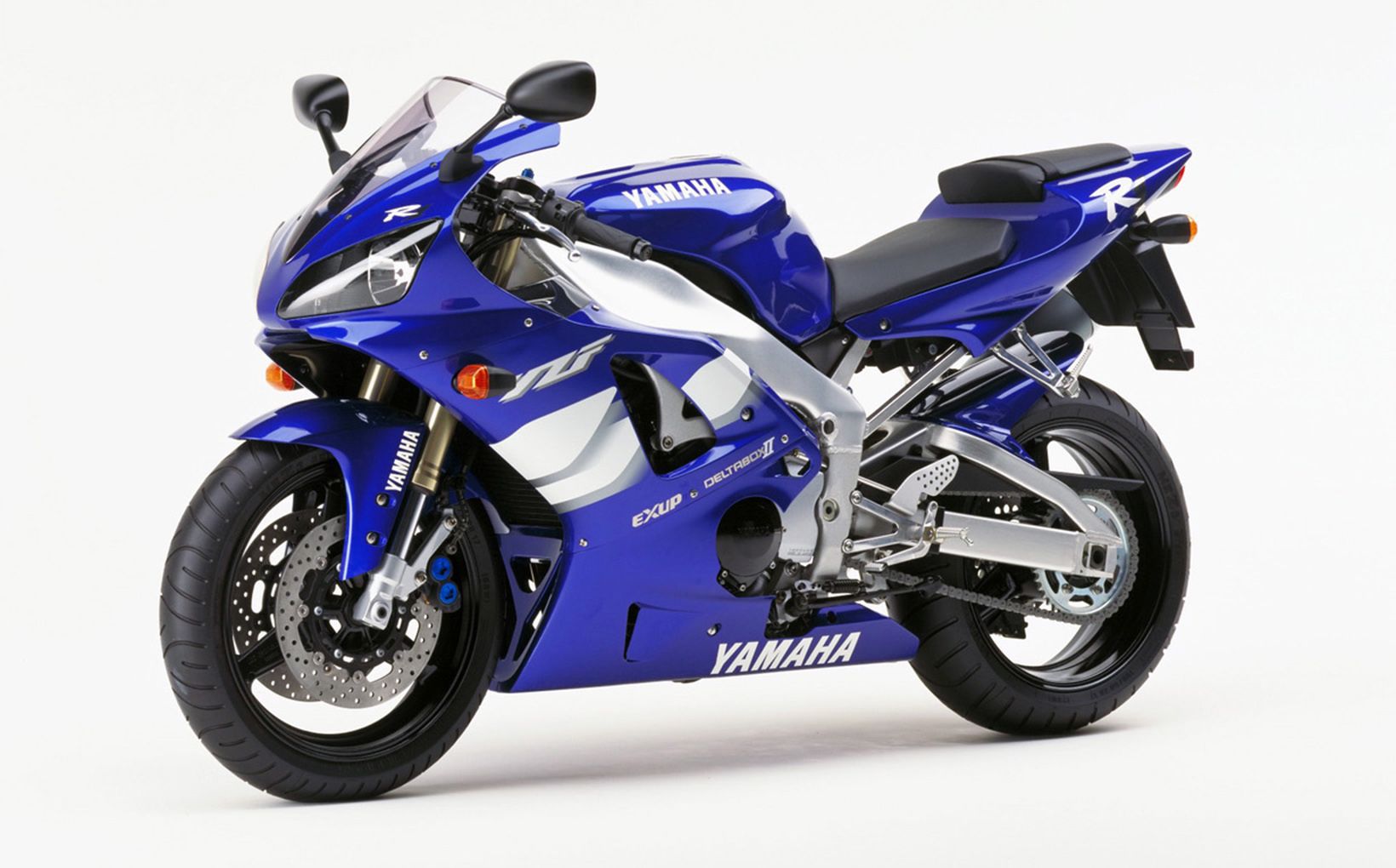 The 2000 R-1 featured a sharper nose and a weight saving of five kilograms. It was still dux of the super sports bike class.
Image: https://en.wheelsage.org/

Very few cars or motorcycles continue for more than a very few years as the undisputed champions in their category and the R-1 met its nemesis in 2001 in the guise of the bold new Suzuki GSX-R 1000, which was almost identical in weight but had more power and torque. Throughout the automotive world the process of technological catch-up may be seen but it is more blatant with motorcycles where, generally, the competition is close and buyers are perhaps more likely to switch brands to obtain the newest hero – certainly many Honda, Suzuki and Kawasaki owners swapped to R-1s in the final years of last century and the early part of this one. 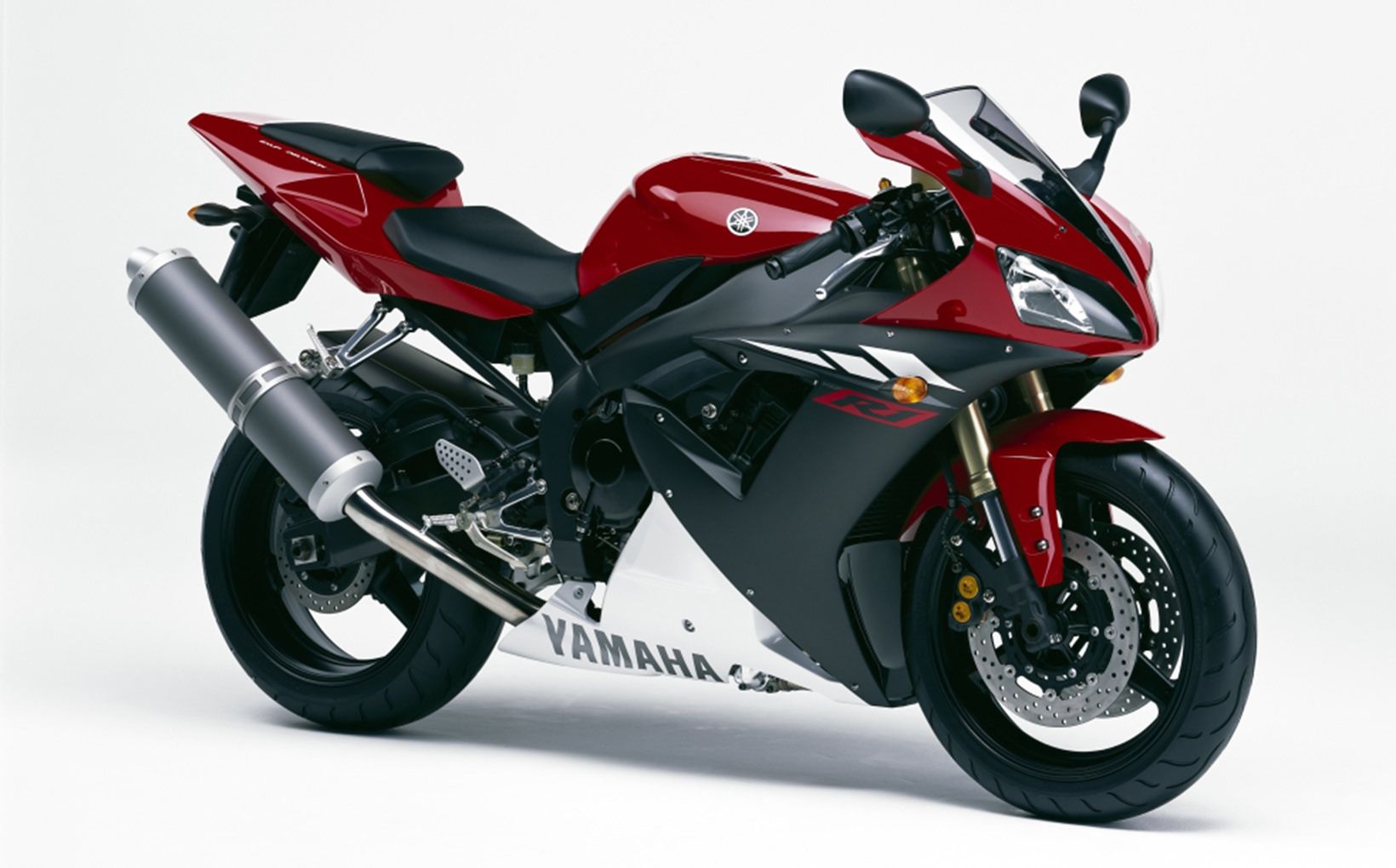 For the 2002-2003 model, electronic fuel-injection replaced the quartet of carburettors.
Image: https://en.wheelsage.org/

The 2002 R-1 ditched its quartet of carburettors for electronic fuel-injection. That same year, the new ‘Deltabox III frame with its hydroformed construction was stronger and more torsionally rigid; Yamaha claimed it was 30 per cent stiffer.

A major upgrade followed for model year 2004 with all-new styling highlighted by a swoopy front fairing and under-seat exhausts. Perhaps more importantly, it got a brand new and markedly oversquare engine, still displacing 998cc but now making 172 brake horsepower to become the first 1.0-litre motorcycle to offer a power to weight ratio of one horsepower per kilogram; in cars of this era, one kW for 10kg was regarded as laudable! 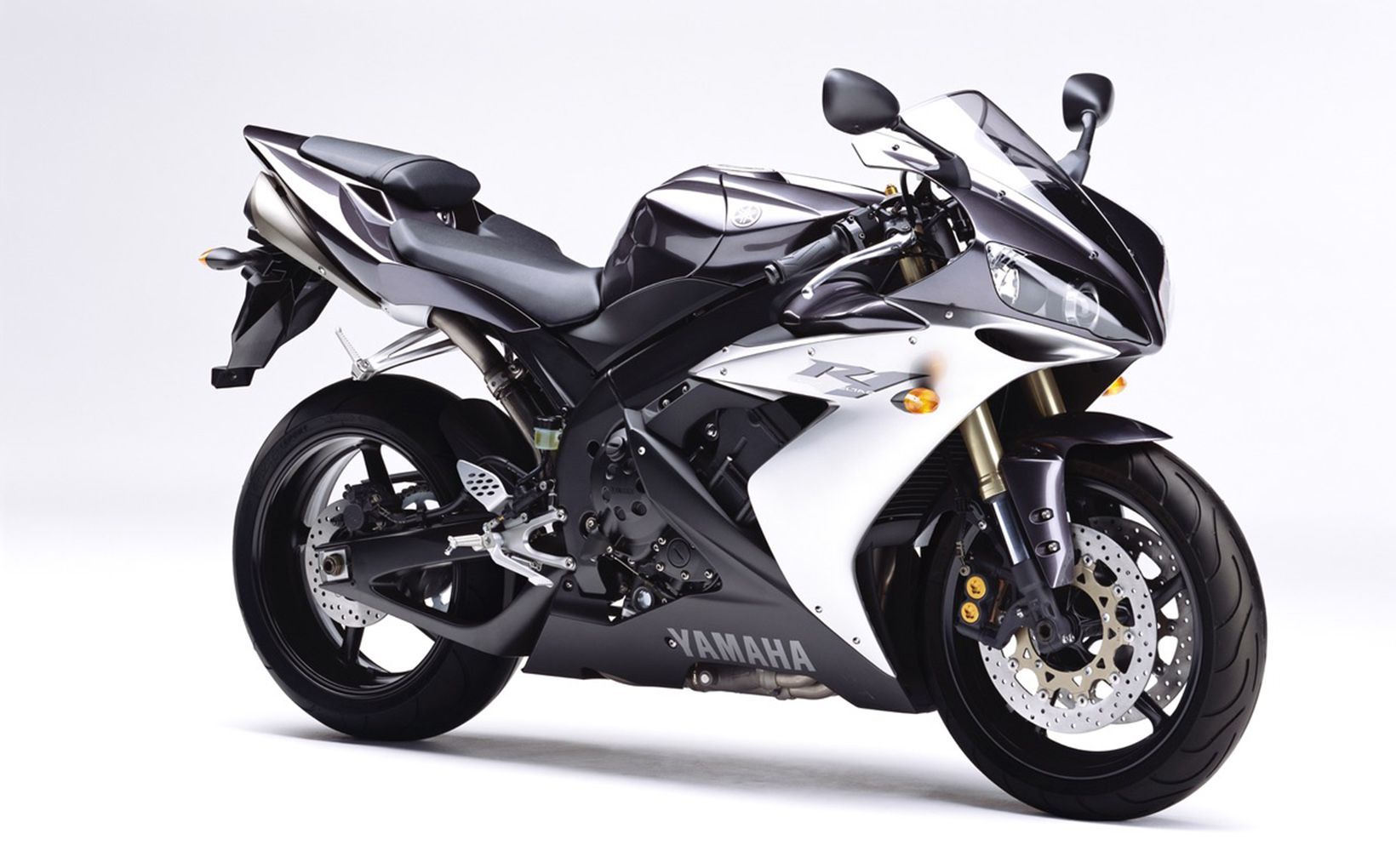 The 2004 R-1 featured an underseat exhaust and brakes improved from their already excellent standard.
Image: https://en.wheelsage.org/

Between 2004 and now, the R-1 has continued to evolve, although its fair to say that none of the subsequent models produced the same level of excitement as the 1997 original. Perhaps in tacit acknowledgement of the iconic status of the 1997 bike, Yamaha offered a retro edition in 2007 complete with the red seat! 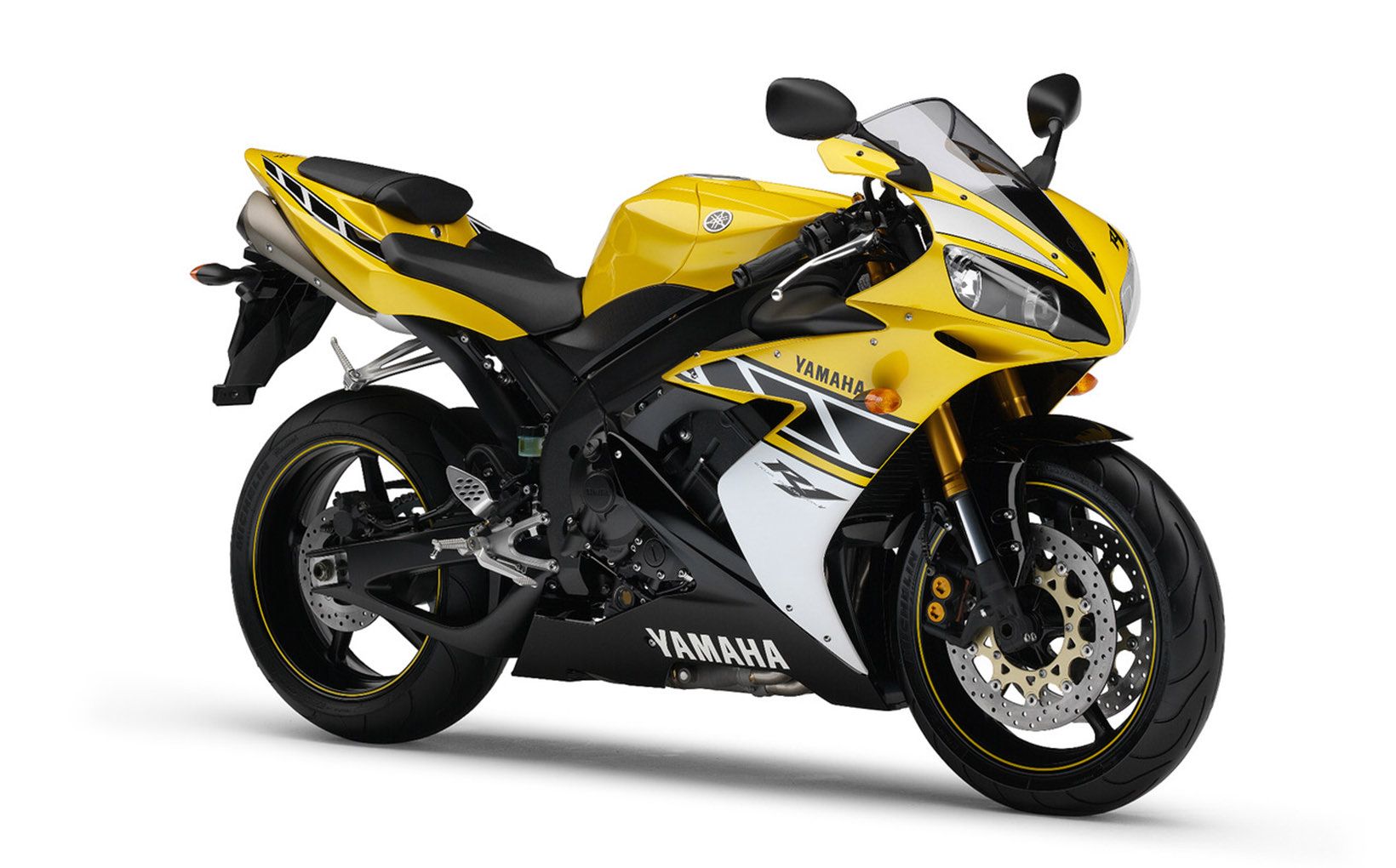 The 2005-2006 model made 180 horsepower and featured a 20mm-longer swingarm for improved stability under (stupendous) acceleration.
Image: https://en.wheelsage.org/

Among the most significant developments came in 2009 when the R-1 acquired a unique new engine with cross-plane crankshaft. By 2015, this once-pure sports bike was equipped with a small dictionary’s worth of acronyms, including traction control (TCS), Slide Control System (SCS), Launch Control System (LCS) and – unthinkable in 1997 or even in 2007! – anti-wheelie Lift Control System (LIF). 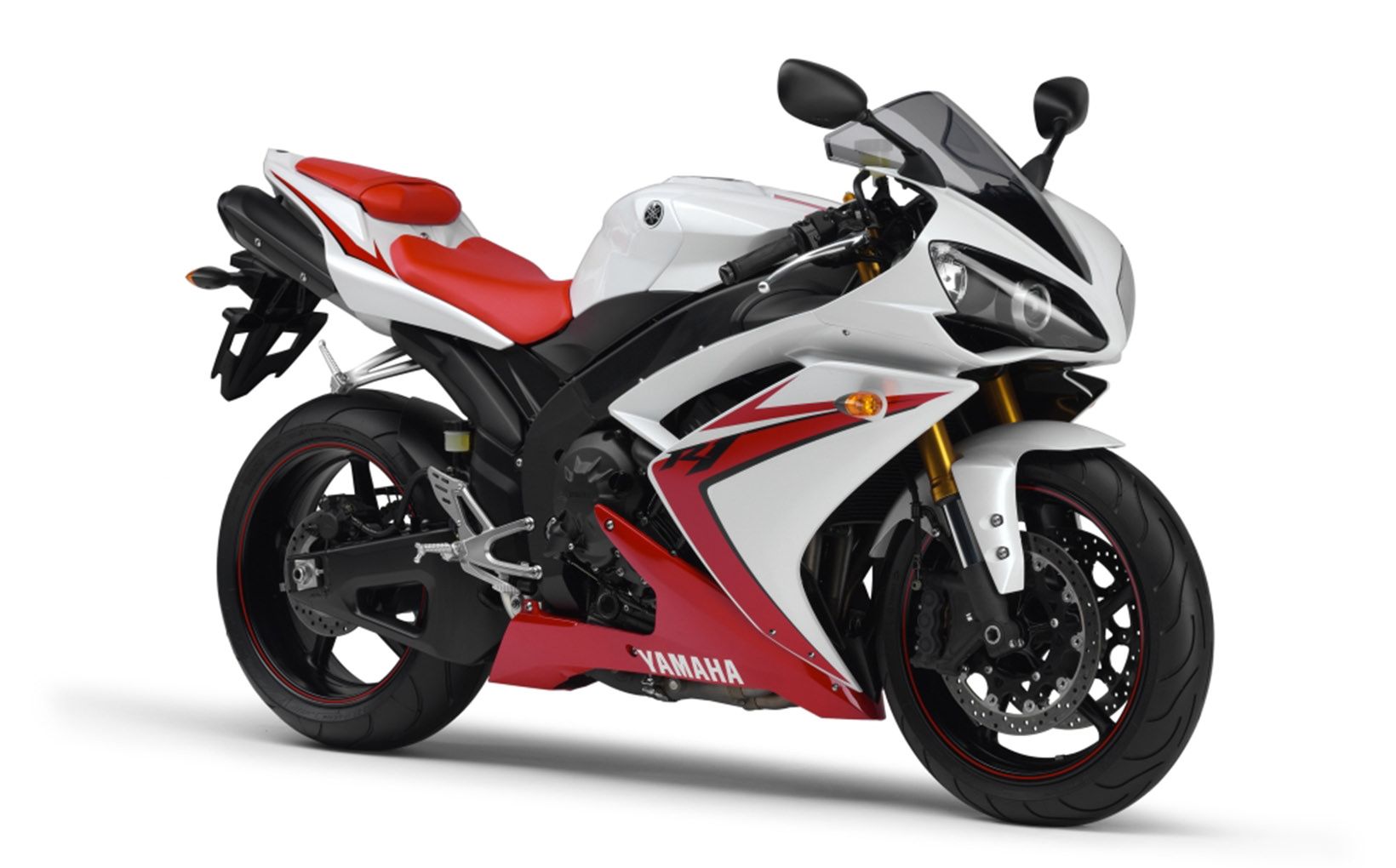 The R-1 still rides at or near the pack of 1.0-litre super sports bikes in 2021, but in the 1997-2000 window, it was undoubtedly the best of its kind, inspiring rival manufacturers to strive for more power, less weight and sharper handling. 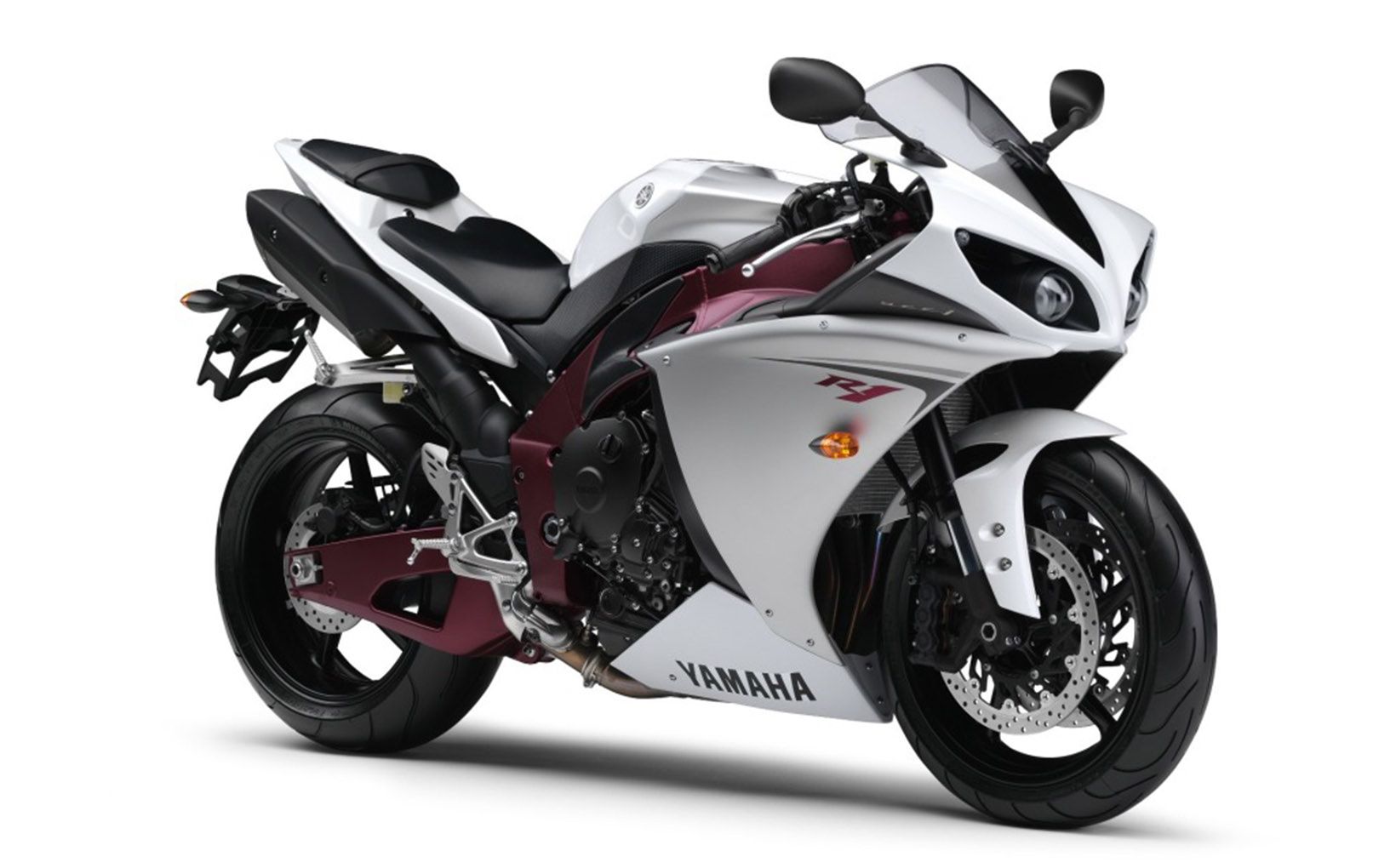 The 2009-2011 model boasted a cross-plane crankshaft. This generation continued without major changes until 2015.
Image: https://en.wheelsage.org/

If some genius inventor conceived the first motorcycle not in the nineteenth century (Gottlieb Daimler, 1885) but the twenty-first, he would never be allowed to put it into production. But, thank goodness, when Yamaha gave the world the inspirational wheelie-prone and utterly exciting YZF R-1 three calendar flips from the end of the twentieth century – and despite the Nanny State’s increasing challenges to the freedoms of motoring – the world was mostly very grateful! 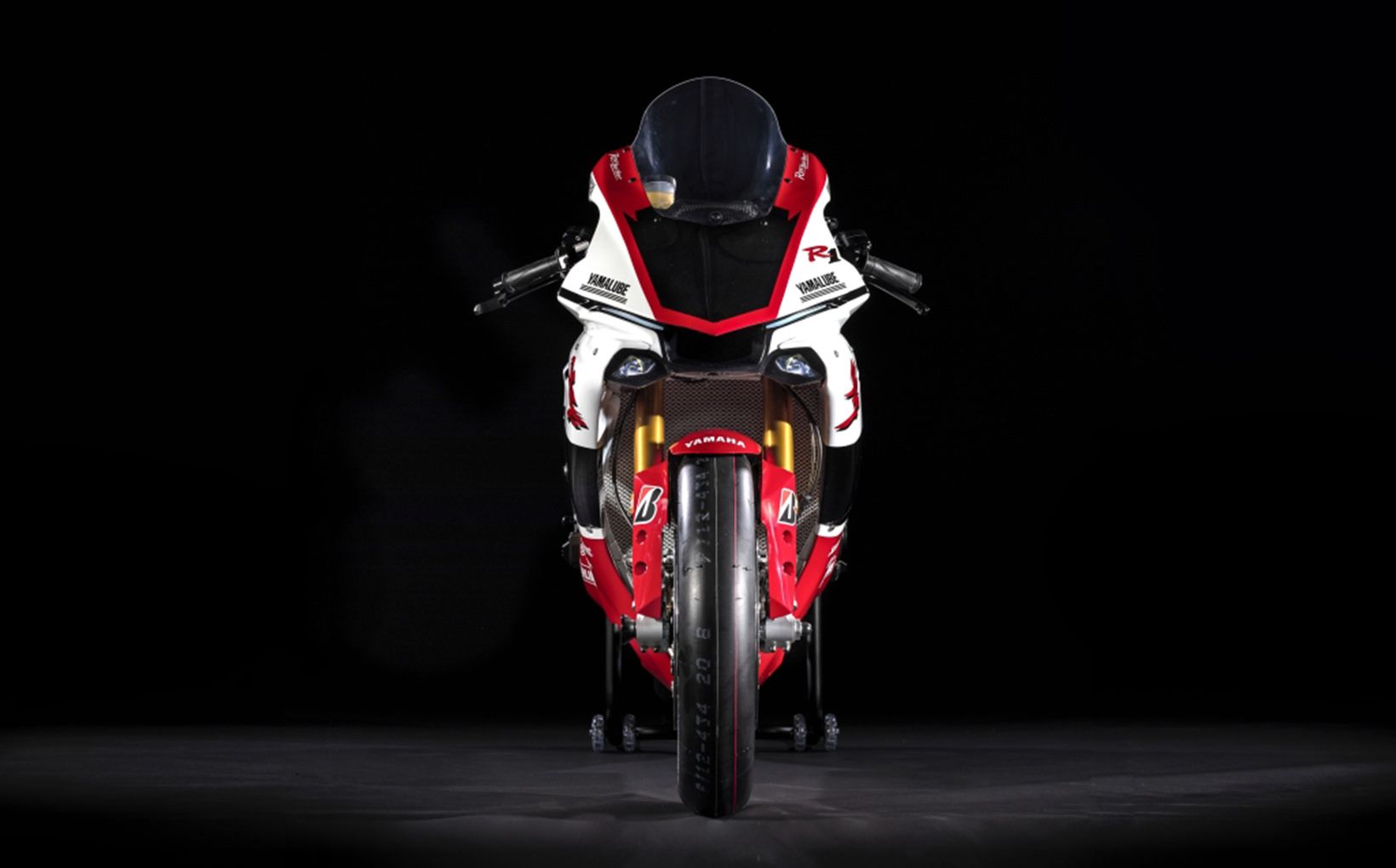 For 2015, Yamaha launched a new-gen R-1 with the expected complement of acronyms. This is the 20th Anniversary edition of 2018.
Image: https://en.wheelsage.org/ 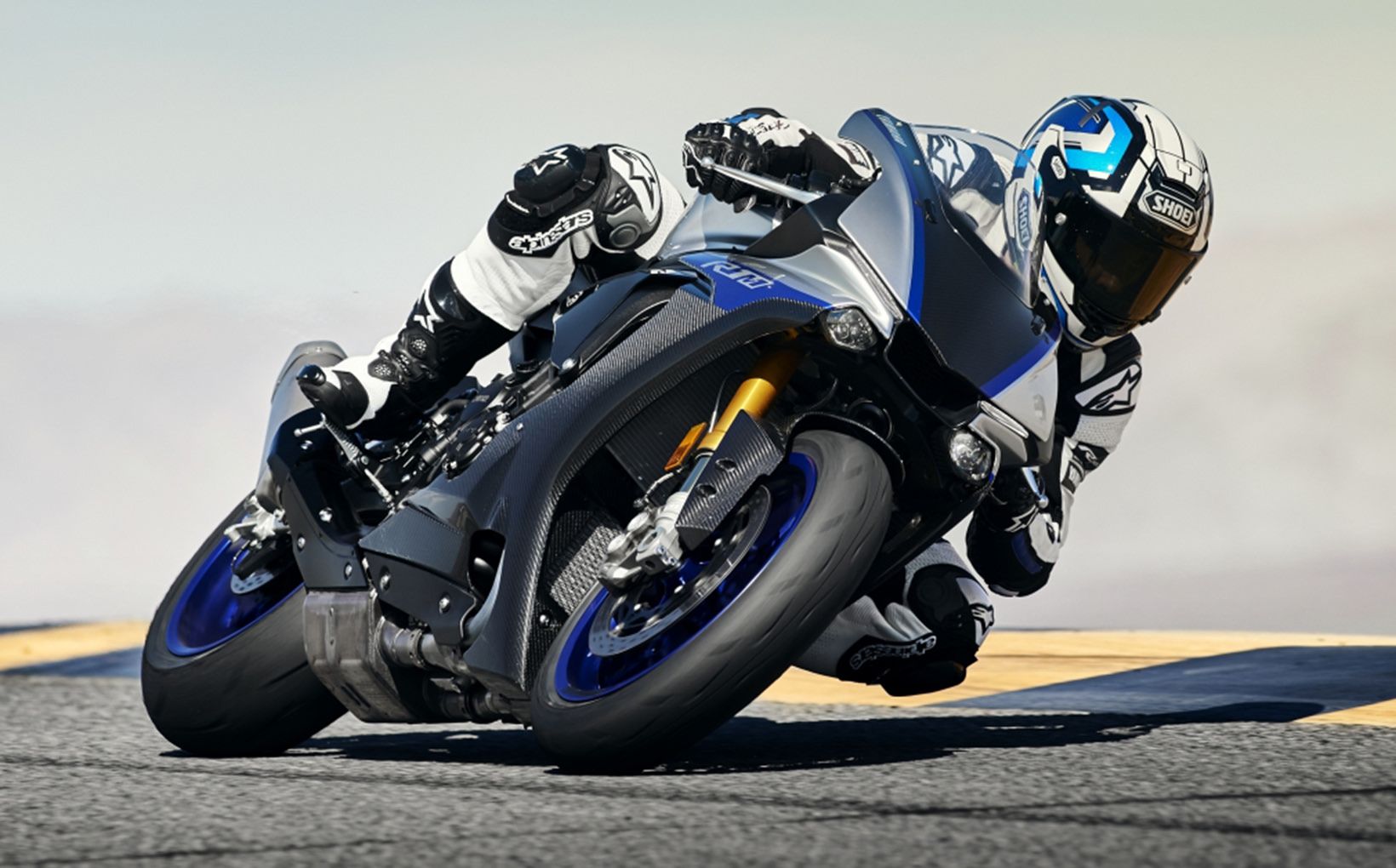