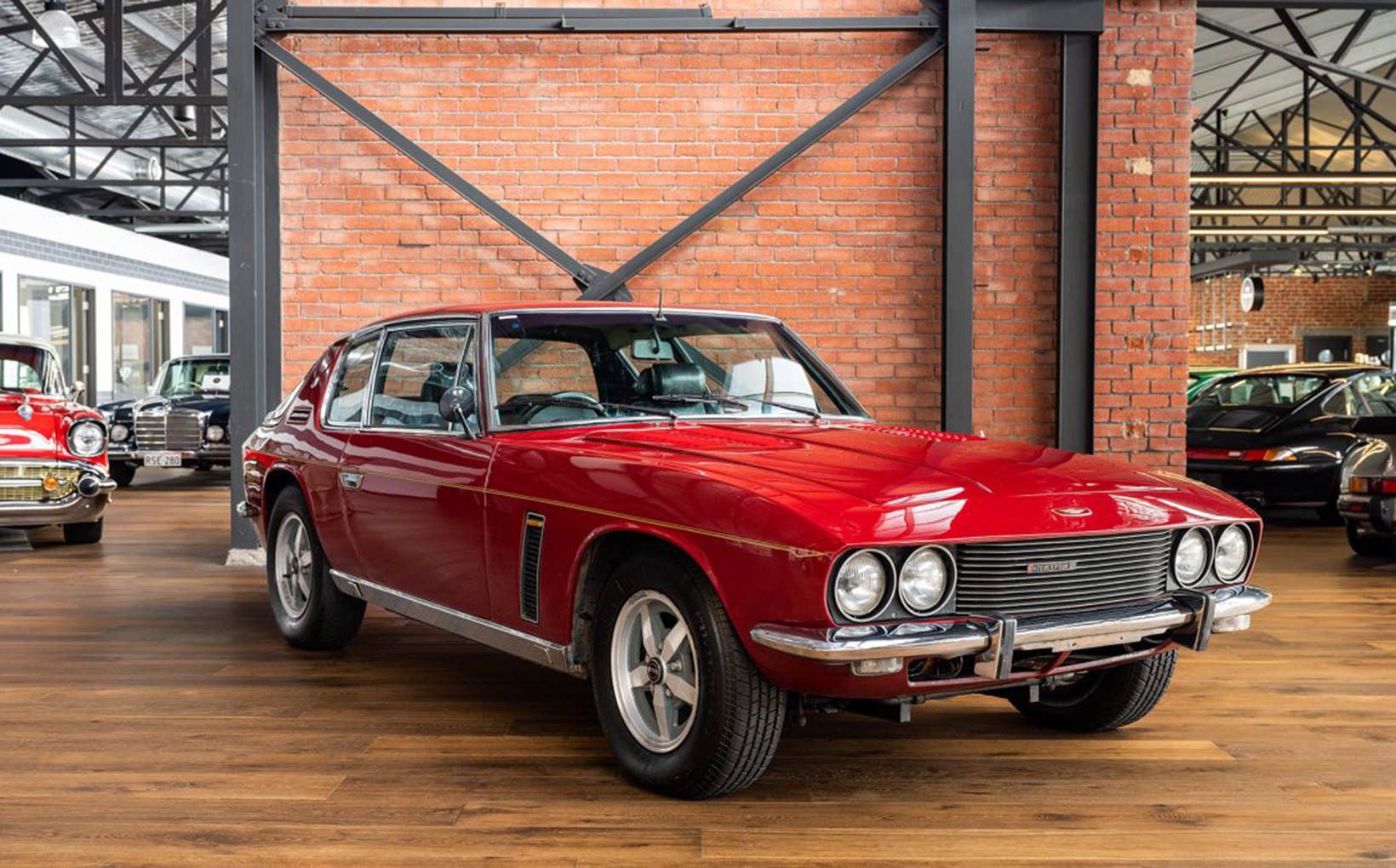 As well as being a fascinating vehicle in its own right, the Jensen Interceptor reflects the major change in the classic car market which began a decade or so ago and accelerated during COVID 19. Difficult though it is to believe, as recently as about 2012, this gorgeous GT was widely regarded as just another used prestige car. Less than $30K would buy you a very tidy example. While some of the cars to show dramatic appreciation in recent years seem undeserving, the Interceptor was desperately underrated for too long. Imagine having been able to secure one of these for about twenty-five per cent of the price of a 1960s or 1970s Aston Martin!

Yet in almost every respect the Jensen Interceptor is the equal of, say, a DB6, albeit slower in top speed (133 miles per hour, compared with 150) and not available with a manual transmission – apart from 24 of the ‘Mark I’ models – which doubtless sent many prospective customers elsewhere. The car was a bargain when new, though not to the same extent as the extraordinary Jaguar E-Type.

British coachbuilder brothers Alan and Richard Jensen became part of the automotive world in the 1930s and achieved a measure of fame in 1934 when actor Clark Gable invited them to create a body for the Ford V8 chassis he shipped to the UK. By the outbreak of World War 2 in 1939, they had built some 65 rakish sports tourers. But during the late 1930s their main business was commercial vehicles and during the war they produced components for the military.

Although the Jensens first used ‘Interceptor’ in 1949, the cars to carry the charismatic sub-brand were commercially unsuccessful and thus most enthusiasts think of the 1955 fibreglass-bodied 541 as the first Jensen. Initially, it came with a 4.0-litre six-cylinder Austin engine and struggled to reach the ton, an achievement mastered by the DOHC XK-powered Jaguar Mark V1I half a decade earlier! It seems likely that the successful example of the prestigious French luxury car maker Facel Vega in using Chrysler V8 engines in its gorgeous grand tourers provided inspiration to the brothers. In 1962 they introduced the CV8 (still with fibreglass body), which was powered by a 383 cubic-inch Mopar V8 and could reach 130 miles per hour. 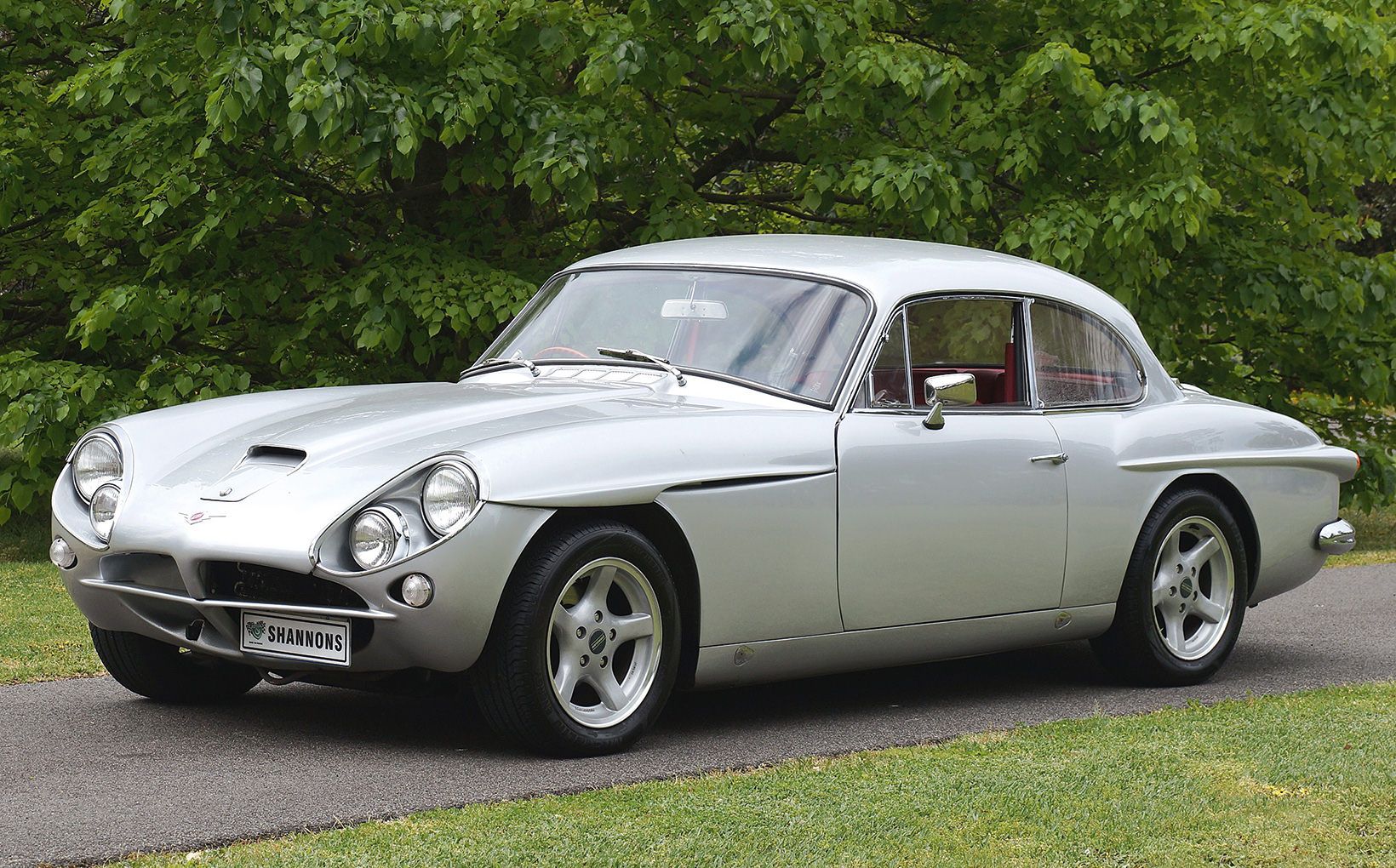 While the CV-8 (Chrysler V8) was not beautiful, it has become highly collectible.
Image: Shannons

But the CV8, widely regarded as being ungainly of style, was not a big success and they both retired from the board in 1966 after failing to convince their fellow members to back their favoured design for the next car. The new board took the collective view that their future lay with a car that combined the best Italian design with a Chrysler V8 and Torqueflite automatic transmission. It was hardly a breakthough idea though, since Iso had introduced its Chevrolet V8-powered Rivolta in 1962 and Bristol built 88 407 coupes with 5.3-litre Chrysler V8s and Torqueflite transmission. Jensen appointed leading carrozzeria Touring, with Vignale to build the unitary all-steel body. Three cars were shipped from Italy for the 1966 Earls Court Motor Show.

The design was great but the quality of the body was poor and Jensen soon decided to manufacture it in house at the Kelvin Way factory in West Bromwich. This has had the effect of making the rarer Italian-built cars more highly sought. 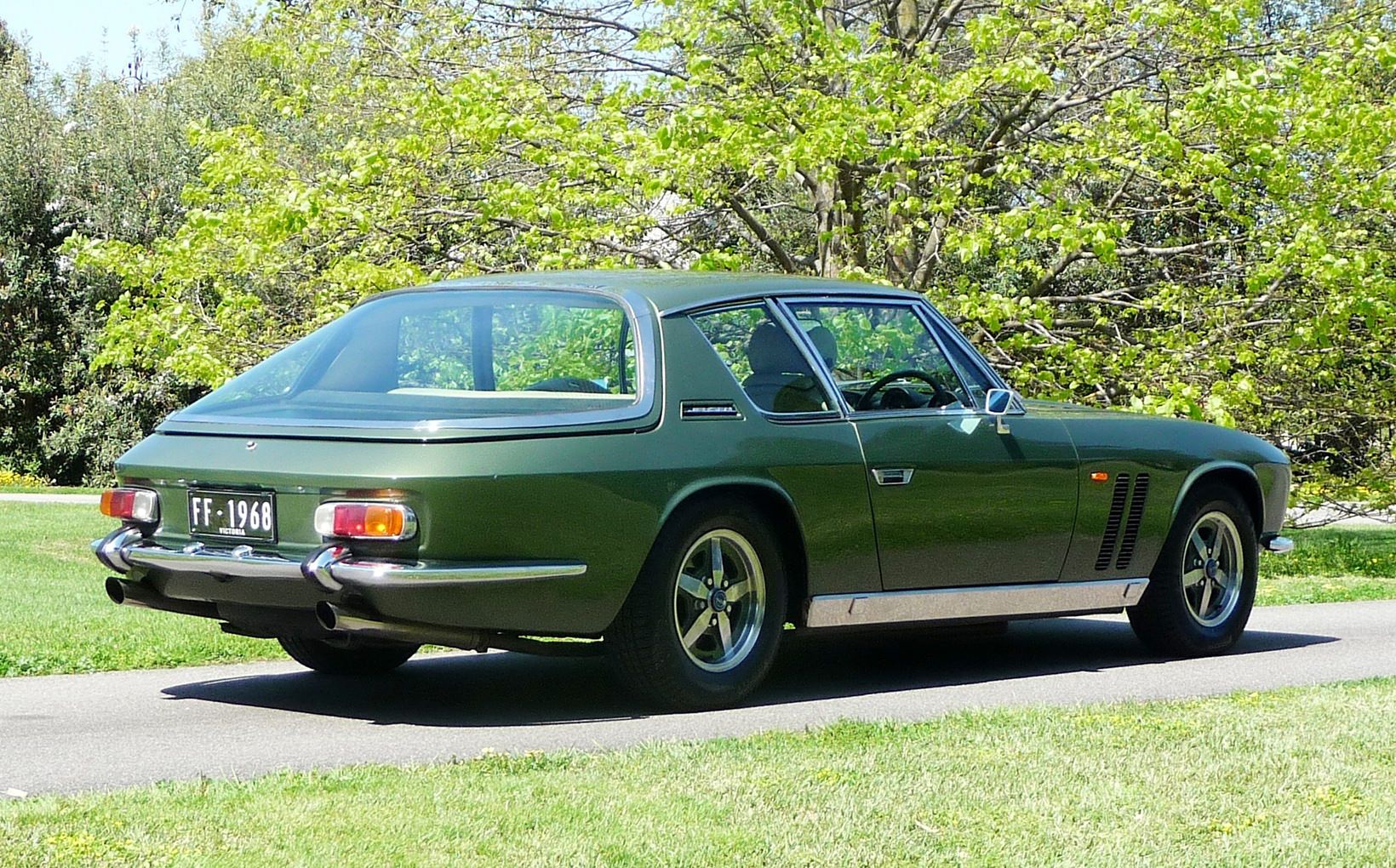 Huge glasshouse is part of the aesthetic brilliance of the Interceptor and FF. This is a 1968 FF.
Image: Shannons

Its interior was magnificent and contemporary road testers liked to note that six entire hides were required to upholster one car! The leather and walnut ambience was the equal of (well, probably) the ponderous and highly priced Rolls-Royce Silver Shadow which made its debut the previous year. 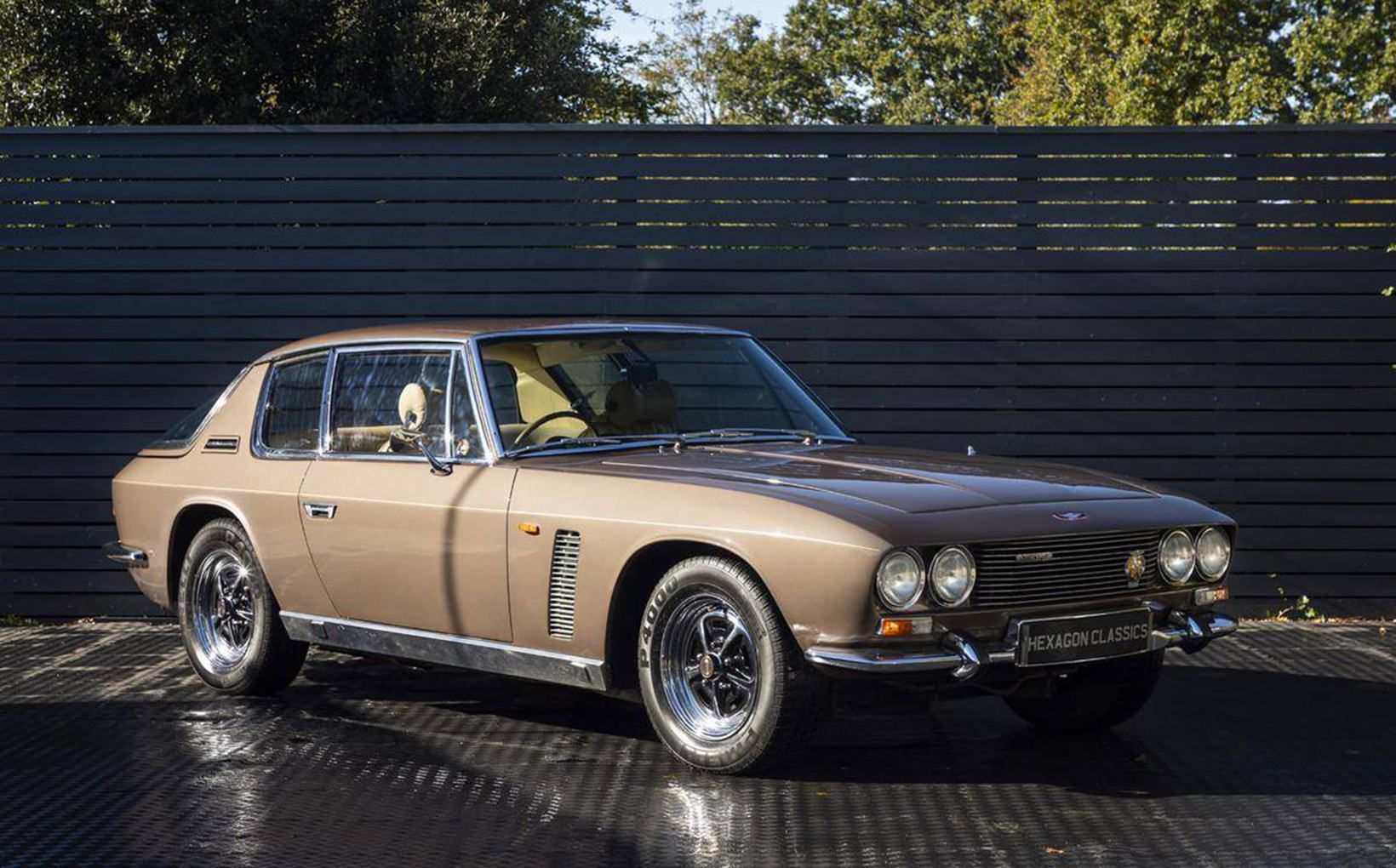 The Interceptor continued almost unchanged until 1969 when the Mark II arrived. One thousand and twenty-four of the ‘Mark I’ were produced. The Mark II – much more covetable with its power-assisted rack and pinion steering, power brakes and fast glass – just eclipsed this with a tally of 1128 until yielding to the Mark III in October 1971. The majority of Interceptors sold (and subsequently offered on the used market) are this variant with an impressive 4255 finding homes in a five-year period; even so, Jensens were never thick in the traffic! The Mark III had alloy wheels which replaced the classic Rostyle steel rims of its predecessors. A convertible was available from 1973 to 1976 but Jensen produced just 456 of them.

The Mark II was also offered in SP guise with a 440-cuber pumping 385 brake horsepower. 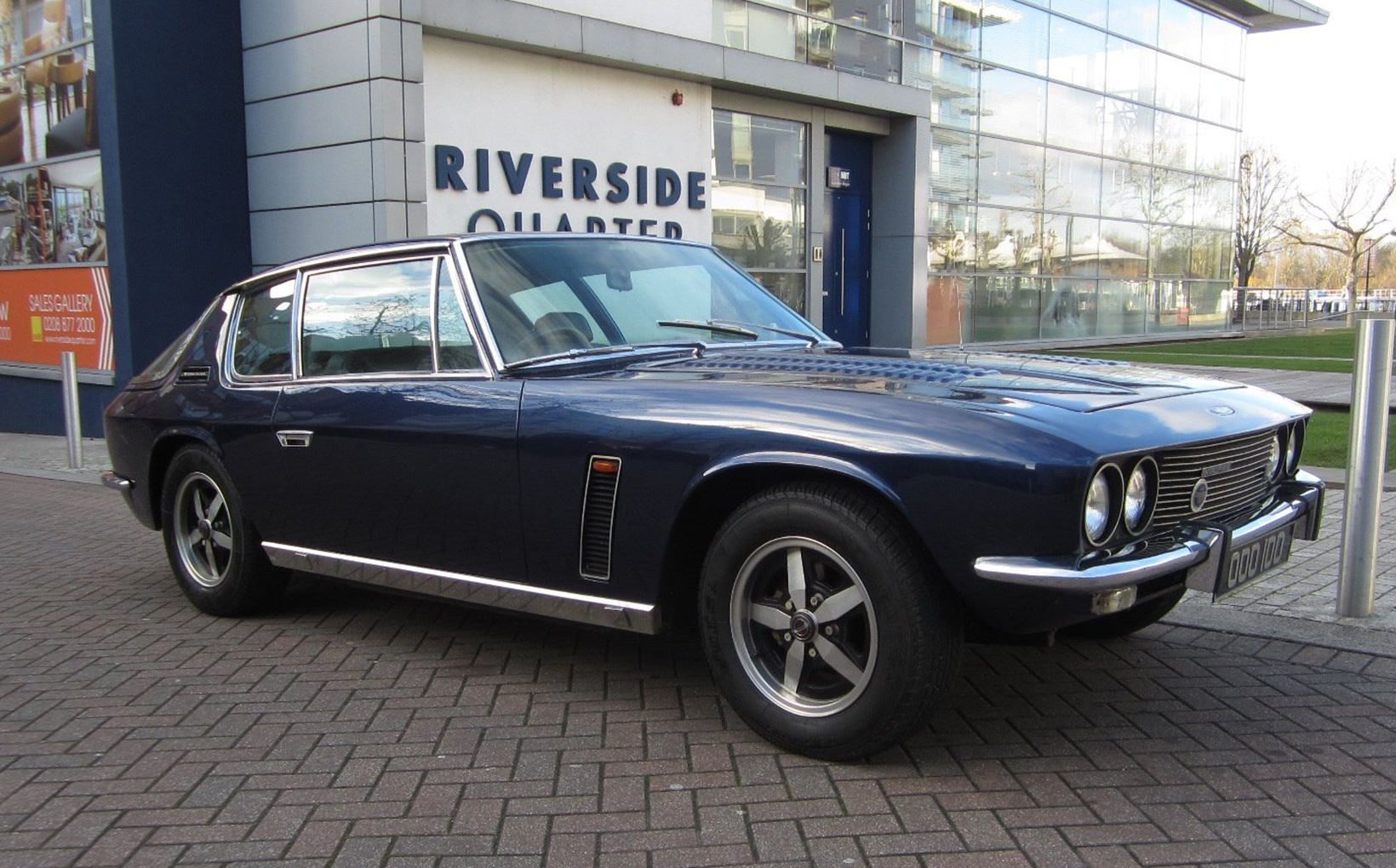 The SP offered even more power from its 440 cubic-inch Chrysler V8. This one dates to 1972.
Image: classicdriver.com

The respected British journal Motorsport tested this latest version in its February 1974 edition and observed:

By current standards of prices for luxury cars, £7,000 makes the Jensen almost the best value for money on the market, excelled only by Jaguar’s unbeatable value. It is almost £2,500 cheaper than the DBS V8, partly justified by the Aston’s coachwork, more sophisticated suspension and racing specification, hand-built, complex V8, offering superior performance, but not really by its overall impression from behind the wheel in automatic guise, and is roughly £1,400 cheaper than a BMW CSi or CSA if equipped with the options which are standard on the Jensen, a price differential which isn’t justified at all in relative terms. It is capable of more than 135mph, will accelerate from 0-60 mph in not much more than eight seconds and drinks fuel slightly more heavily than the Aston, at 10 to 14 miles per gallon. All this is in spite of the massive engine being hampered by the fitment of US emission equipment, even for the British market, although one benefit is that the 8.2-to-1 compression ratio V8 will absorb happily almost any rubbish that the mechanical fuel pump will throw at it, right down to 88 octane two-star, which can mean quite a saving every time the 20-gallon tank is filled. 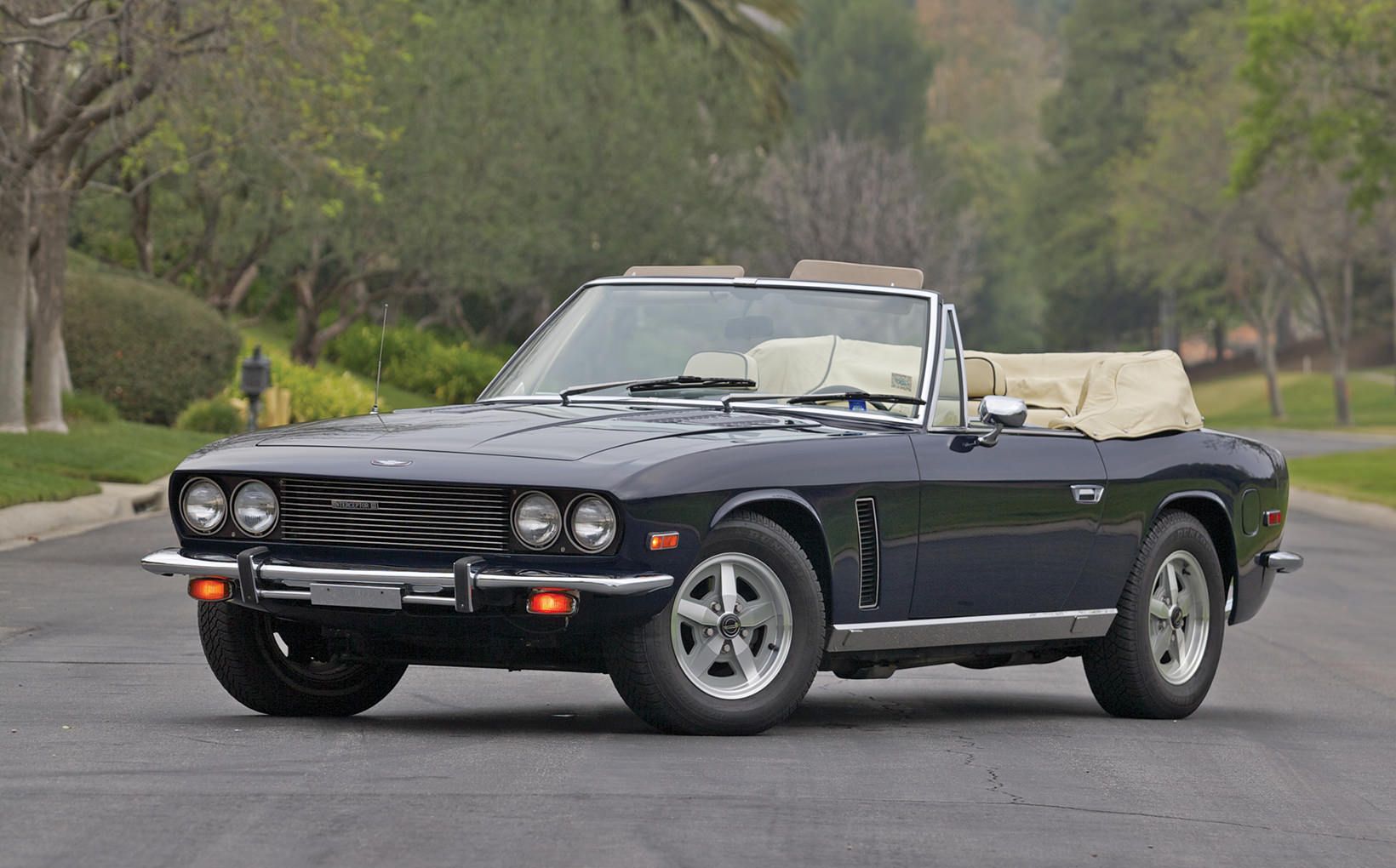 The convertible (1974-1976) was made in very small numbers and cannot match the torsional rigidity of the coupe.
Image: Hemmings Motor News

In conclusion, the tester compared the Interceptor briefly with some esteemed rivals:

After more than seven years, the almost futuristic Vignale body style is almost undated and the Jensen Interceptor remains the epitome of the high-speed executive express. It would benefit from a more sophisticated chassis design to improve its high speed cornering behaviour (not that it does a great deal wrong—it just feels that it might) and beyond that this hand-built West Bromwich product rivals that product from Crewe in terms of comfort and silence, is more relaxing to drive because it is more compact and has far more precise handling and is faster. What more could a man require who doesn’t want an out-and-out sports car, but wants something more individual that an XJ12. 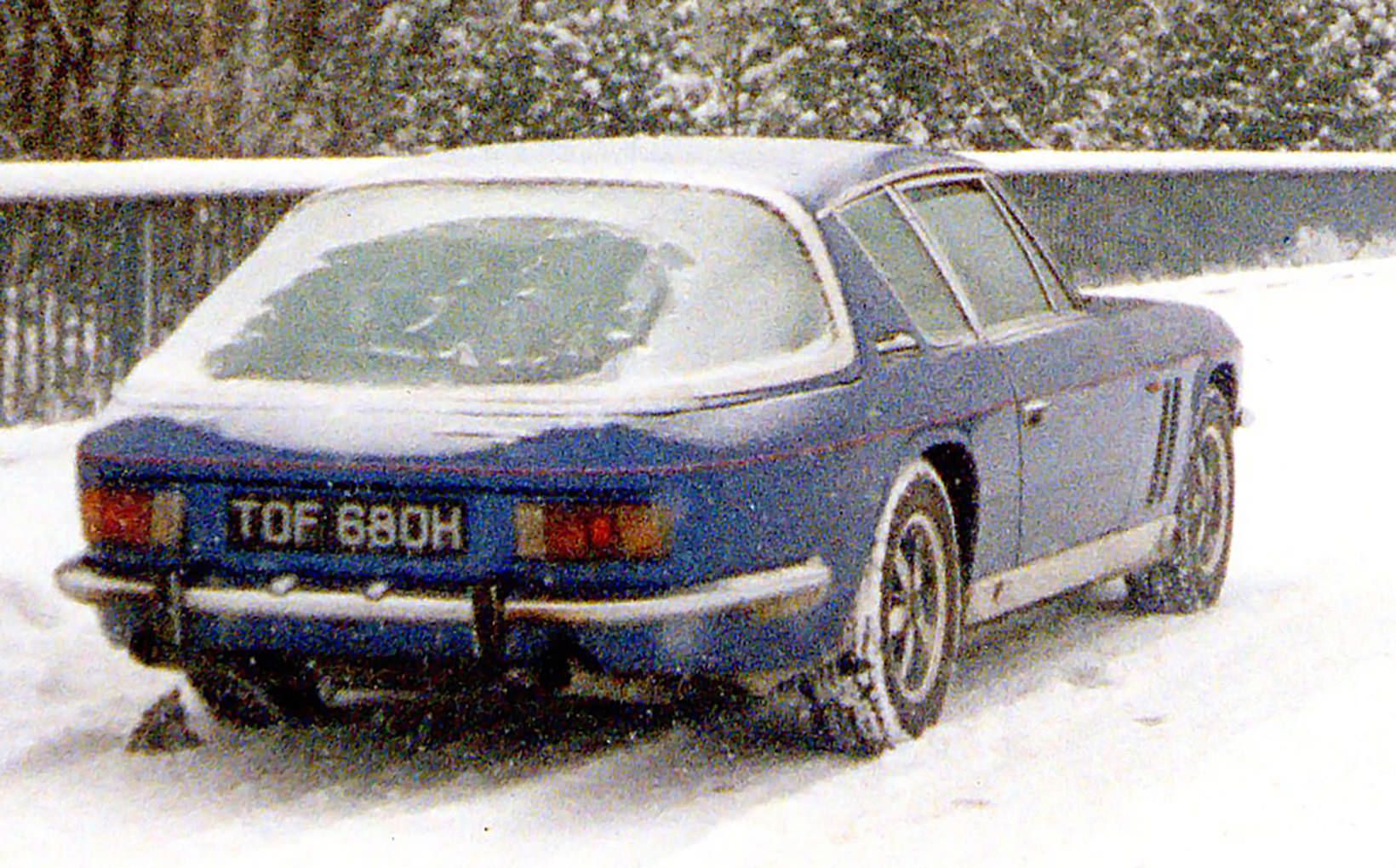 Jensen FF was the most technically advanced car in the world in 1966.
Image: Wikipedia

Excellent as the Interceptor was, there was an even more special Jensen that can claim to have been unique in its day. Fourteen years before Audi astonished the automotive world with ur-quattro, Jensen produced a premium grand tourer with permanent Ferguson Formula drive to all four wheels (with a substantial 4WD transfer case bolted to the back of the Torqueflite transmission). Thirty-seven per cent of the drive went to the front wheels. Unbelievably for 1966, it also had brilliantly effective Dunlop Maxaret anti-lock brakes. The FF was seven inches longer than an Interceptor with four of these inserted into the wheelbase.

The FF is recognisable by two vents on the bonnet sides instead of one on each side and an air-intake on the bonnet lid. Its frame tubes are also further outboard to accommodate a wider transmission tunnel.

Four of the FF’s additional seven inches of length went into the wheelbase.
Image: Wikipedia

No lesser luminary than Motorsport founding Bill Boddy opined in the January 1969 edition:

Fortunately, going up to Silverstone for the VSCC Driving Tests the roads were wet, and I was able to appreciate the FF’s superiority over conventional motor cars. It is possible to turn on the power of the 325bhp Chrysler V8 engine with impunity. Corners can be negotiated under power – you just turn the front wheels and the FF goes where it is pointed. This is not only impressive and reassuring, but makes for excellent cross-country average speeds.

The Maxaret braking is of immense value on slippery roads. The knowledge that the wheels will not lock gives great confidence; you approach a road junction, or tuck in between two moving vehicles, and just stamp on the brake pedal, no matter how wet or greasy the road surface. Kick-back from the pedal on slippery going is no worse than we used to experience on certain vintage cars whose chassis frames flexed – a 6½-litre Bentley, for example.

Couple this braking with 4WD and you have one of the safest cars on the market. The FF costs £1809 more than the Interceptor; whether this is worthwhile will depend on how a driver rates his skid-avoidance skill. From limited experience I can say that the FF transformed my method of driving.

Never especially plentiful, Interceptors are now quite rare in Australia and there may possibly be no FFs at all. Despite costing very much more than they did a few years ago, one of these cars can deliver enormous joy. As with all classics, buy absolutely the best example you can afford and make sure the body is essentially sound. Personally, I would as soon own an Interceptor as an Aston DB6 or a V8 Bristol.