A bevy of fabulous Australian Muscle Cars will be crossing the block at Shannons upcoming Melbourne Spring Auction on September 23. 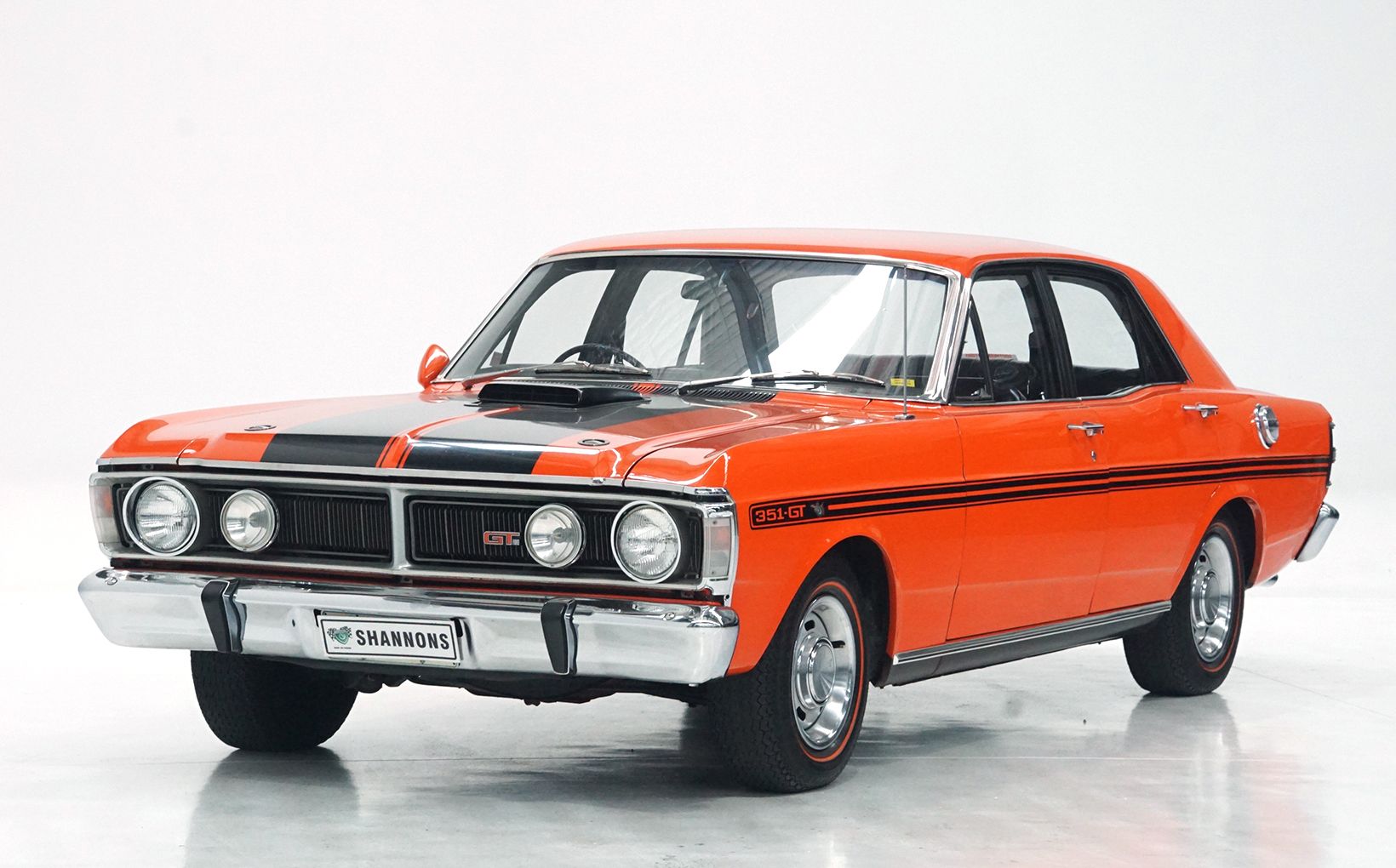 The most desirable of them all is a 1971 Ford Falcon XY GT sedan that is widely regarded by enthusiasts as one of the best ‘unrestored’ example of its type.

Finished in the model’s ‘hero’ colour of Vermillion Fire, the GT being auctioned is rare as one of 18 models sold by Hobart Ford Dealer, Southern Motors and one of just 14 of the 1530 examples built to its particular specification.

Having covered just over 58,000 indicated miles at the time of cataloguing, the Falcon comes to auction in increasingly rare, original condition, with its factory paint largely unblemished, while inside, its factory black vinyl trim remains in great condition. All of its original hardware remains under the bonnet, although age-related patina is much more evident here.

Still wearing steel five-slot wheels and red-wall tyres, the GT also comes with a set of driving light covers, its original factory vinyl wallet with owner’s manuals, a period Ford Falcon GT brochure, plus a spare set of keys, making it ideal for the serious collector.

Because of its rare, original condition and its status as one of the greatest Aussie muscle cars of all time, Shannons expect this special XYGT to sell in the $240,000 - $280,000 range. 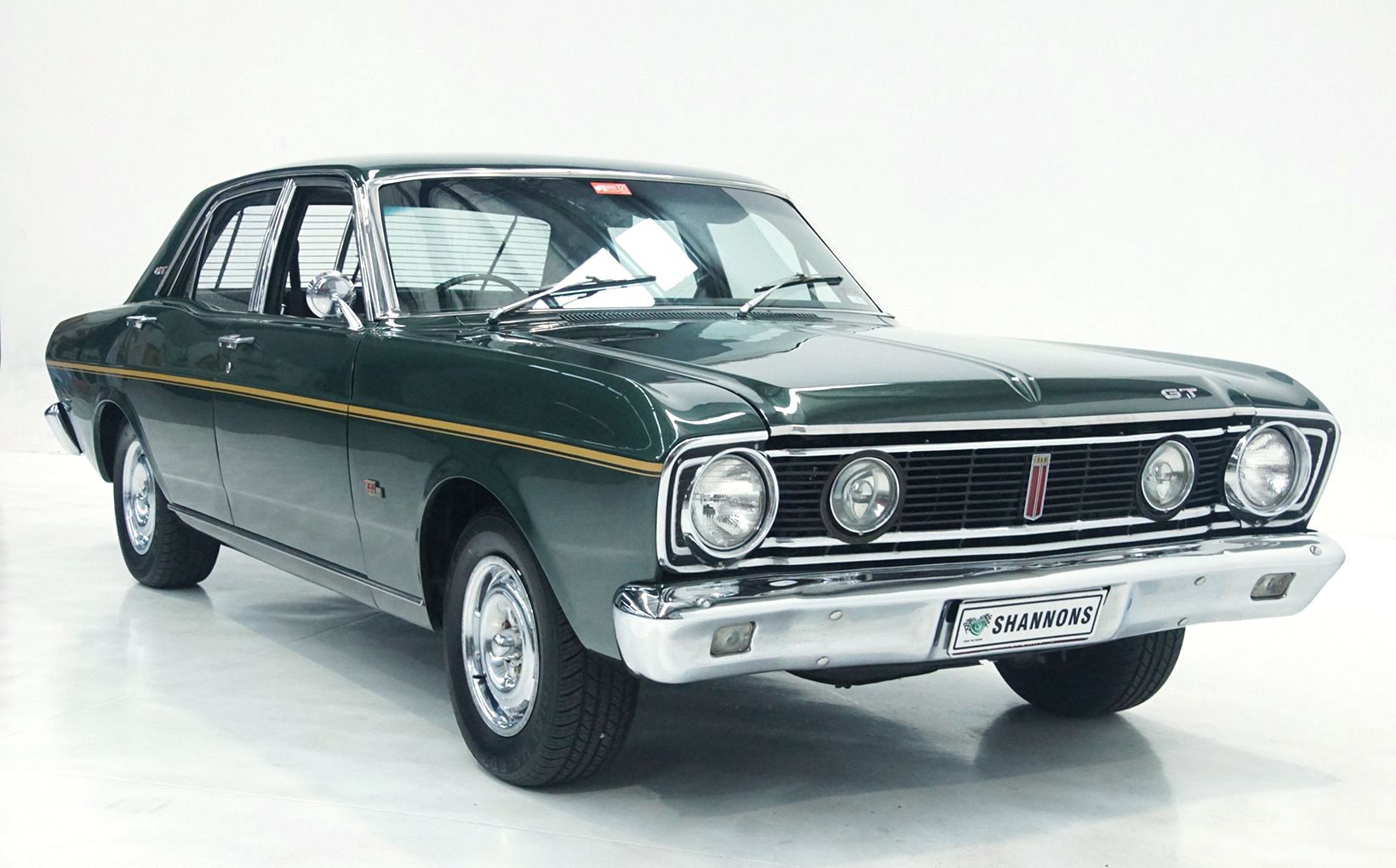 Finished in refreshed Zircon Green paintwork with black vinyl interior, this XT-model GT presents well and has a real presence, while its 302 V8 has also been rebuilt and upgraded with roller-rockers.

Holden Muscle Car enthusiasts have the choice of a 1985 Holden HDT VK Group A SS Commodore and a pair of 1970 GTS Monaros. 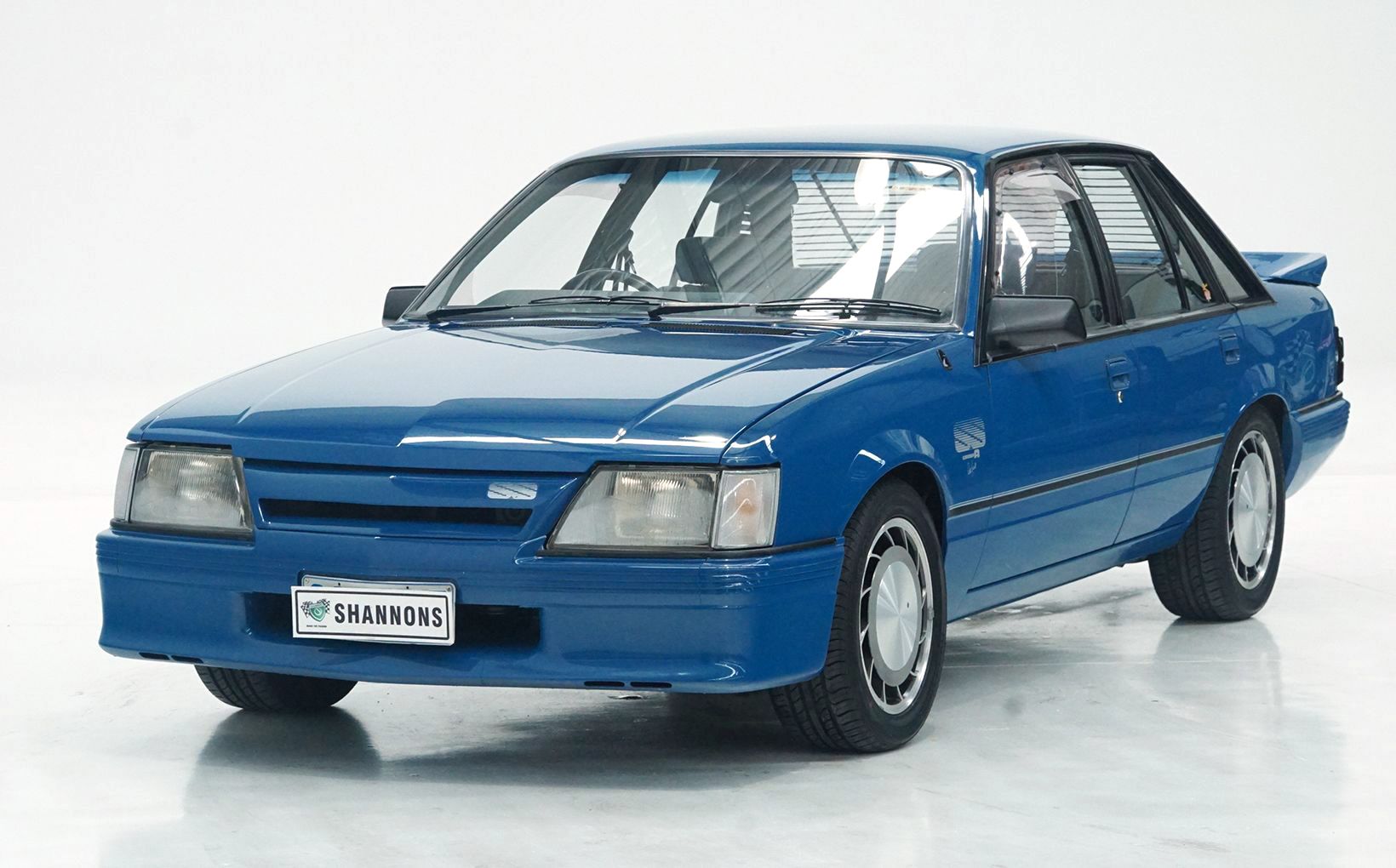 The Peter Brock-developed VK is a very early build (No 6), low kilometre, three-owner and original example, presented in well-loved condition throughout.

Its signature Formula Blue paintwork and grey-blue velour trim both remains in good condition, commensurate with its age.

Giving it further gravitas, the late Peter Brock, his brother Phil and HDT teammate John Harvey have all signed the car’s glovebox lid.

With values of these special Commodores now making them a proven investment, Shannons expect this excellent example to sell in the $140,000 - $155,000 range.

Monaro lovers have a choice of three – a pair of 1970 Monaro GTS Coupes and a final edition 2005 Holden CV8-Z Monaro Coupe. 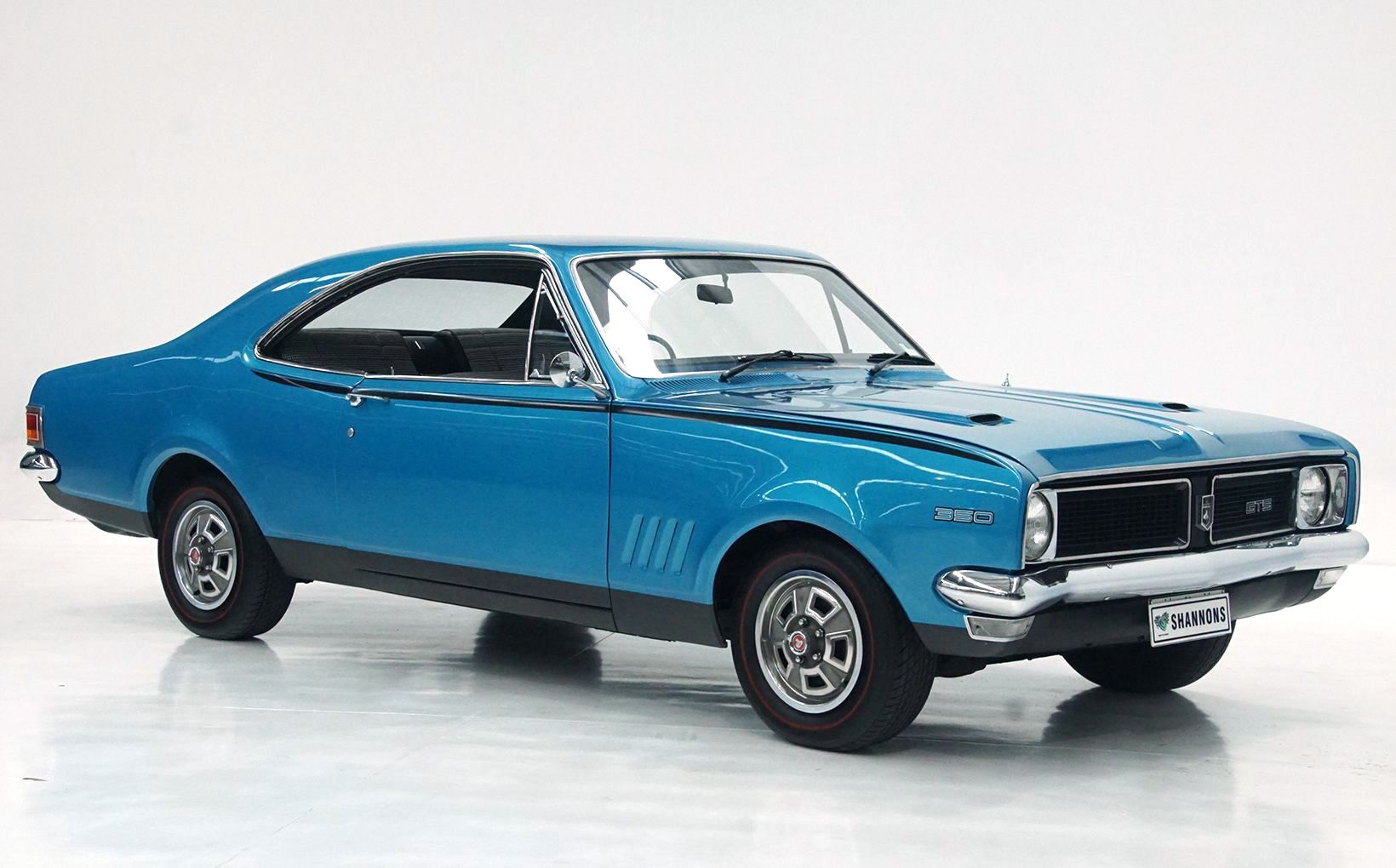 For traditional Monaro lovers, the pick of the trio is an HG Monaro GTS 308 now reconfigured as a GTS 350 coupe.

Leaving the factory as a 308ci V8-engined car, the Monaro now runs a period-looking 350ci Chevrolet V8, hooked up to a TH350 automatic transmission. Meanwhile, its original Burnished Bronze paintwork has been changed to Monza Blue Metallic, and its cabin has been re-trimmed in black vinyl, with the iconic Holden 1970’s ‘Hounds tooth’ black and white cloth inserts.

An alternative for early Monaro buyers is a rare 1970 HG Monaro GTS 186S six-cylinder manual GTS that has been unusually factory- optioned, or retro-fitted early in its life, with both a heavy duty ‘Saginaw’ four-speed manual transmission and a ‘10-bolt’ limited slip differential.

Finished in its now-refreshed original Silver Mist Metallic, the Monaro now exhibits some patina, while its Antique Gold interior has also been refurbished with new vinyl.

Modern Monaro enthusiasts meanwhile have the opportunity to acquire a two-owner and completely stock final edition 2005 Monaro CV8-Z showing just 20,603km on its odometer at the time of cataloguing.

The last of 250 manual Monaros built and finished in the hero colour of Fusion with matching black/gold leather trim, with its condition reflecting its cared-for life as part of a private Holden collection.

Finished in the hero colour Fusion with matching trim black/gold leather trim, it is expected to sell in the $55,000 - $65,000 range, making it an affordable addition to any Holden enthusiasts’ garage or as a great 'daily driver'. 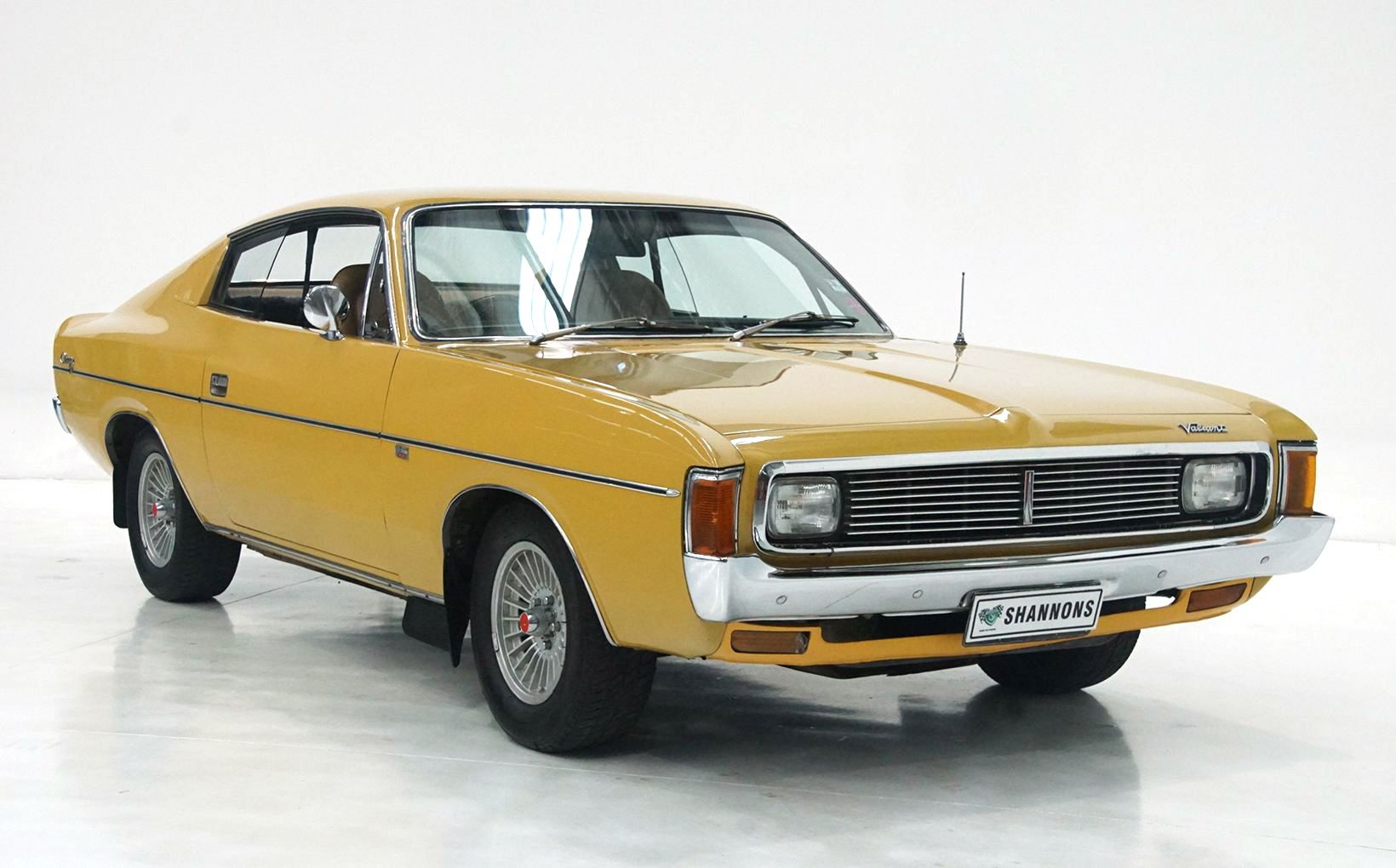 This great entry-level collectable Charger is equipped with classic period accessories such as its factory mudflaps, towbar and fitted sheepskin seat covers front and back.

Along the way, the Charger’s original 245ci straight-six engine has been reconditioned and the Mustard paint resprayed, otherwise it is just as it left the factory including its column-shift, three-speed automatic transmission.