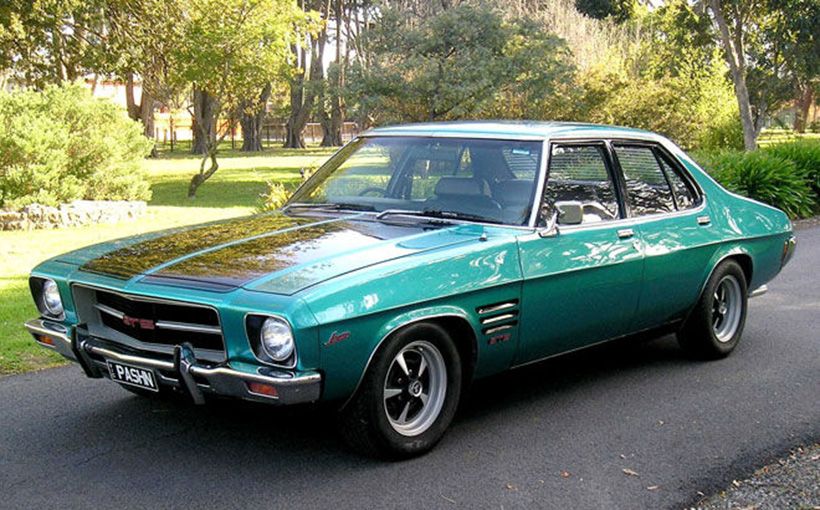 This HQ GTS four door looks unusually striking in Aquamarine, a new colour introduced in 1974, combined with the extra GTS body accents introduced in 1973. FPV designers needed to only look here for inspiration for the GT-F bonnet. The overriders and passenger’s side mirror on this car were optional while the wheels would normally have been supplied with polished trim rings. The 350 decals on the front guards of the earlier HQ GTS 350 were replaced by Monaro badges after March 1973.

The Holden HQ was the first Holden that wasn’t a direct evolution of the original 1948 model. Its dramatic new styling presented something new every time you saw it for months later. Its unprecedented body and structural strength with all-coil suspension not only smoothed-out the roughest Aussie roads but extended longevity. The Monaro GTS 350 four door that arrived almost two years later in March 1973 should have been the most desirable version of all. The reasons why it could never match its Falcon GT rival in the desirability stakes and still doesn’t, can also explain the beginning of the end of Holden as Australians knew it.

The HQ reflected unmatched engineering expertise and experience in dealing with outback Australian roads under the legendary Australian body engineer Reg Hall, known for telling the Americans a thing or two when they got it wrong. Holden’s new sixes that arrived in 1963 with the EH had been steadily improved and Holden’s locally-developed V8 was knocking on the door of the de-toxed imported Chevrolet V8 without the weight and fuel consumption.