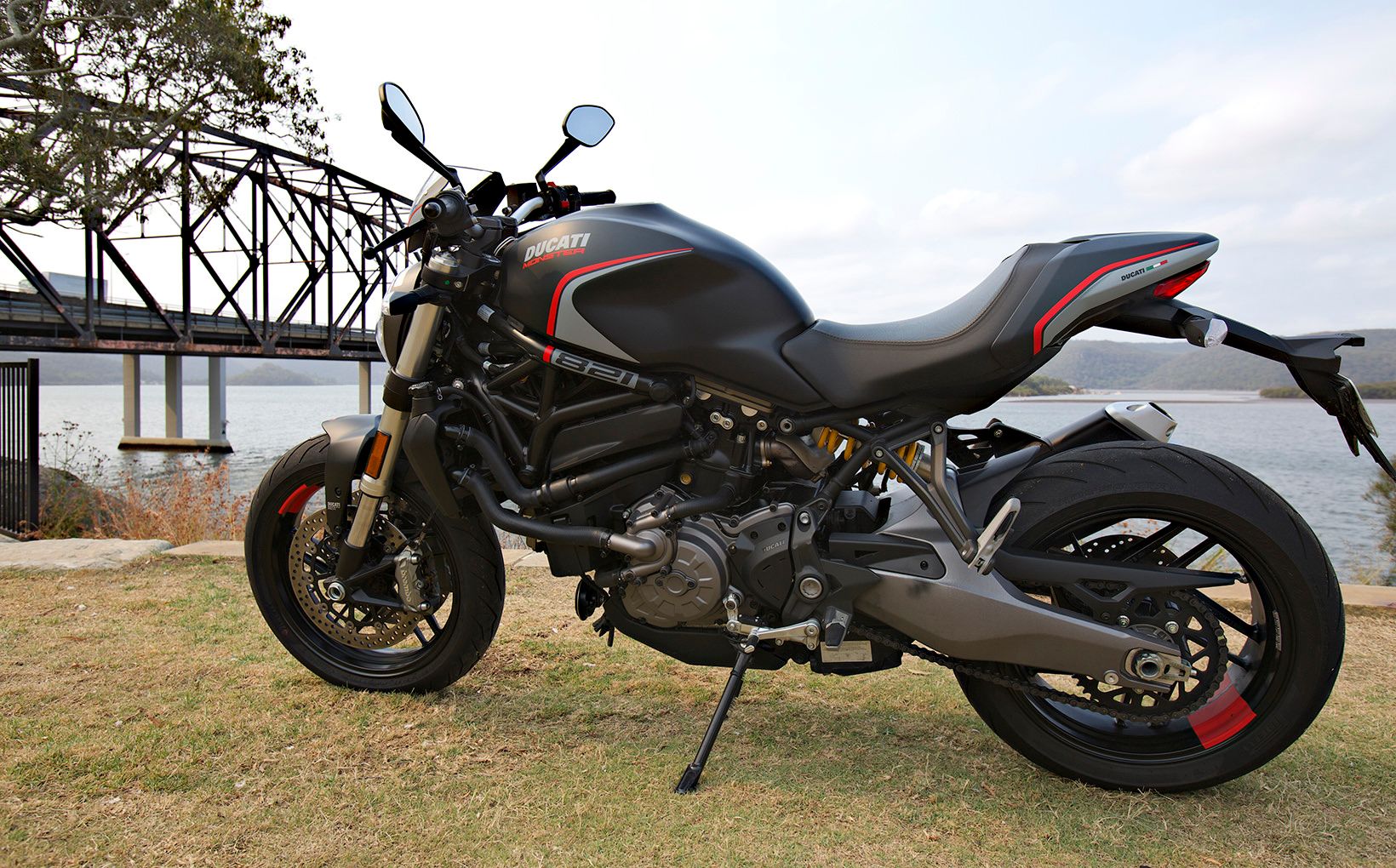 In one form or another, the Ducati Monster has been with us for 27 years. These days its original mantle as a back-to-basics motorcycle may have largely been appropriated by Ducati’s own Scrambler range, but that’s no bad thing. The current Monster has evolved into an excellent and sophisticated motorcycle that’s hard not to fall for. Wearing a moody new paint job, it’s even more desirable.

I last slung a leg over an 821 Monster back in early 2016, which seems like a lifetime ago now, although I enjoyed it so much the memory remains fresh. It was pretty much a brand-new model from the wheels up then, built around the utterly superb 11-degree Testastretta L-twin motor inherited from the then updated Hypermotard, which was definitely the icing on the big red torque-flavoured cake. 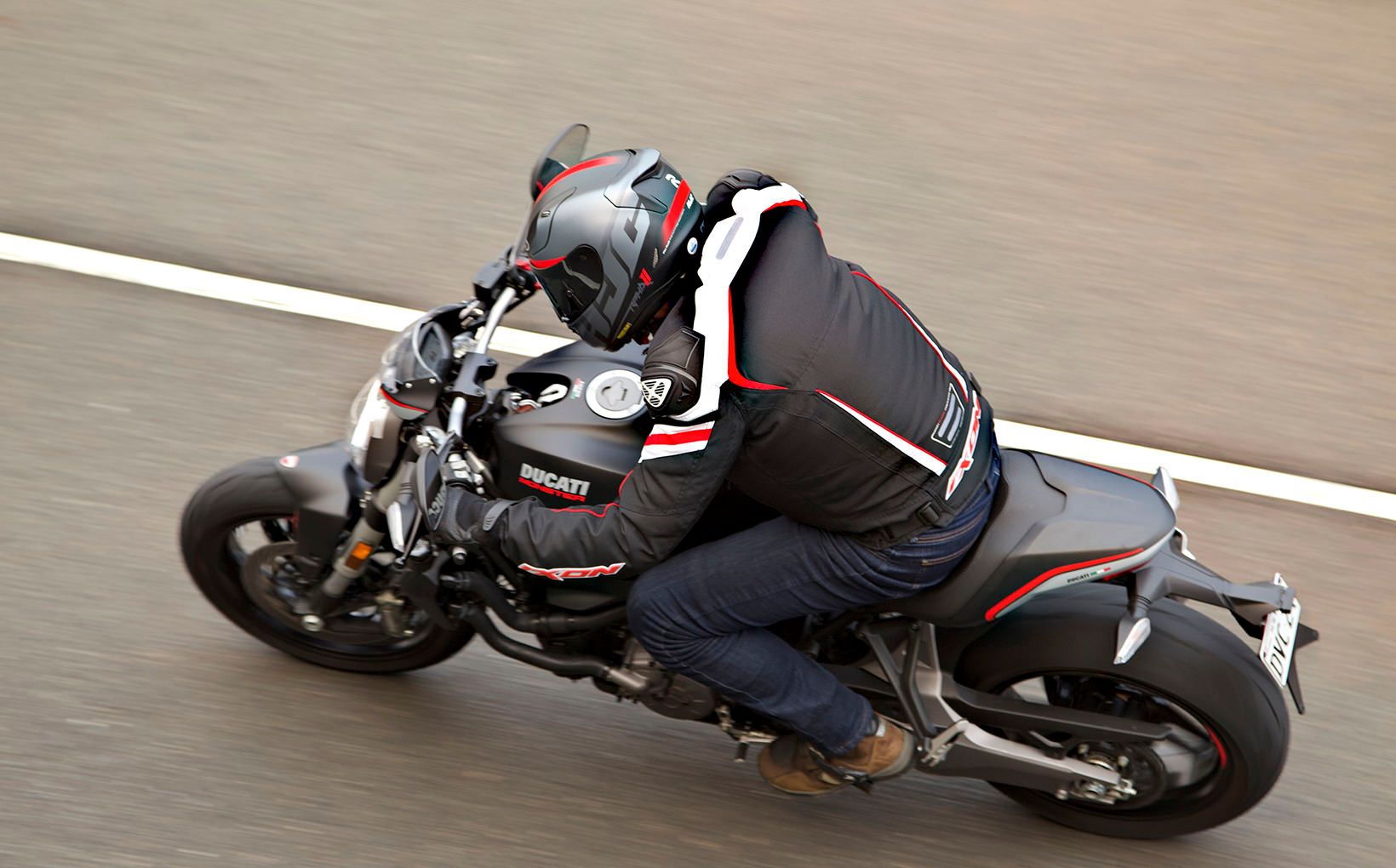 Back then we declared it the best Monster ever made, featuring excellent revisions to the geometry and ergonomics that totally eliminated our previous gripes with the range, those being an unnaturally wide and low handlebar position and a seat that sloped markedly towards the tank, making it hard not to continually slide forward. Hitting the brakes on a bumpy road would almost always result in unwanted tank/scrote-bag intimacy, and no matter how often you shuffled your bum around to find a comfy spot on the freeway, you’d always end up right back where you started.

What’s more, the utterly peachy engine matched the bike’s riding style so perfectly it was like it had been specifically crafted for the job all along, rather than being something of a hand-me-down. In case you’ve been living in a cave for the last few years, the naming of the range of 11-degree engines, used on most of Ducati’s non-sportsbike models, refers to the valve overlap, and while these engines might make a bit less power for a given size, they produce much more torque and a lot less vibration: perfect for the road. 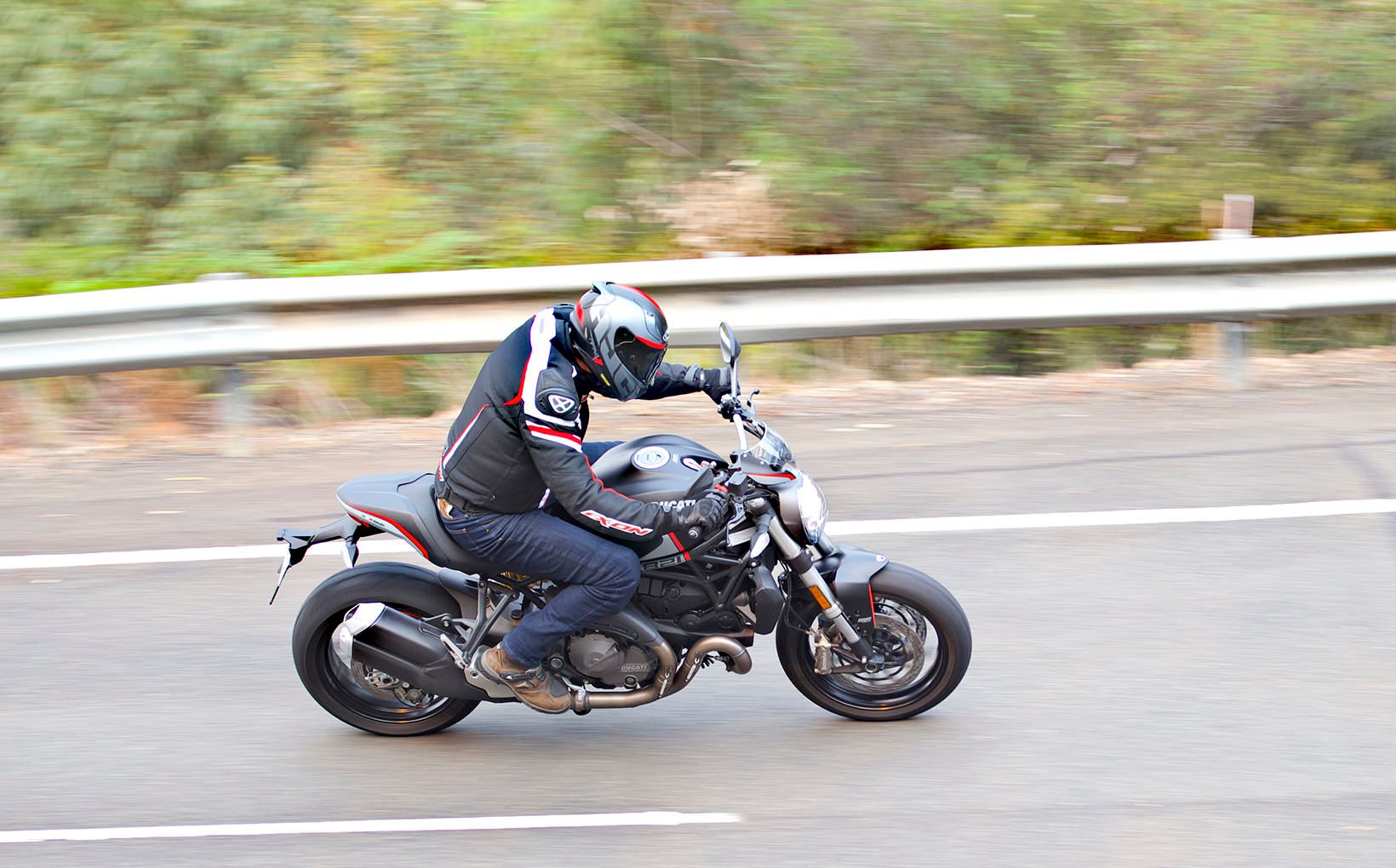 DON’T MESS WITH A GOOD THING

Well good news people: none of the above has changed on this, the Stealth version of the Monster. What’s more, the colour scheme looks even cooler than the red one I rode all that time ago. The way the stripes and 821 logo flow across the upper frame rail is pretty unique, matched with the similar logo in the bold red splashes of colour on the wheel rims. I’ve always liked non-red versions of Ducatis and the matt-black finish on this is bang on trend, if a little harder to care for than regular gloss paint.

When you wash your pride and joy, be sure not to dry it with a synthetic cloth like I did. The copious amounts of yellow fluff that stuck to the paint left the bike looking like I’d rubbed it down with Big Bird and meant I had to hose it off (tank water of course) and start again. Use a proper chami-leather and it buffs up a treat. I’d also be sticking a tank protector on it straight away as scratches seem to show more easily. 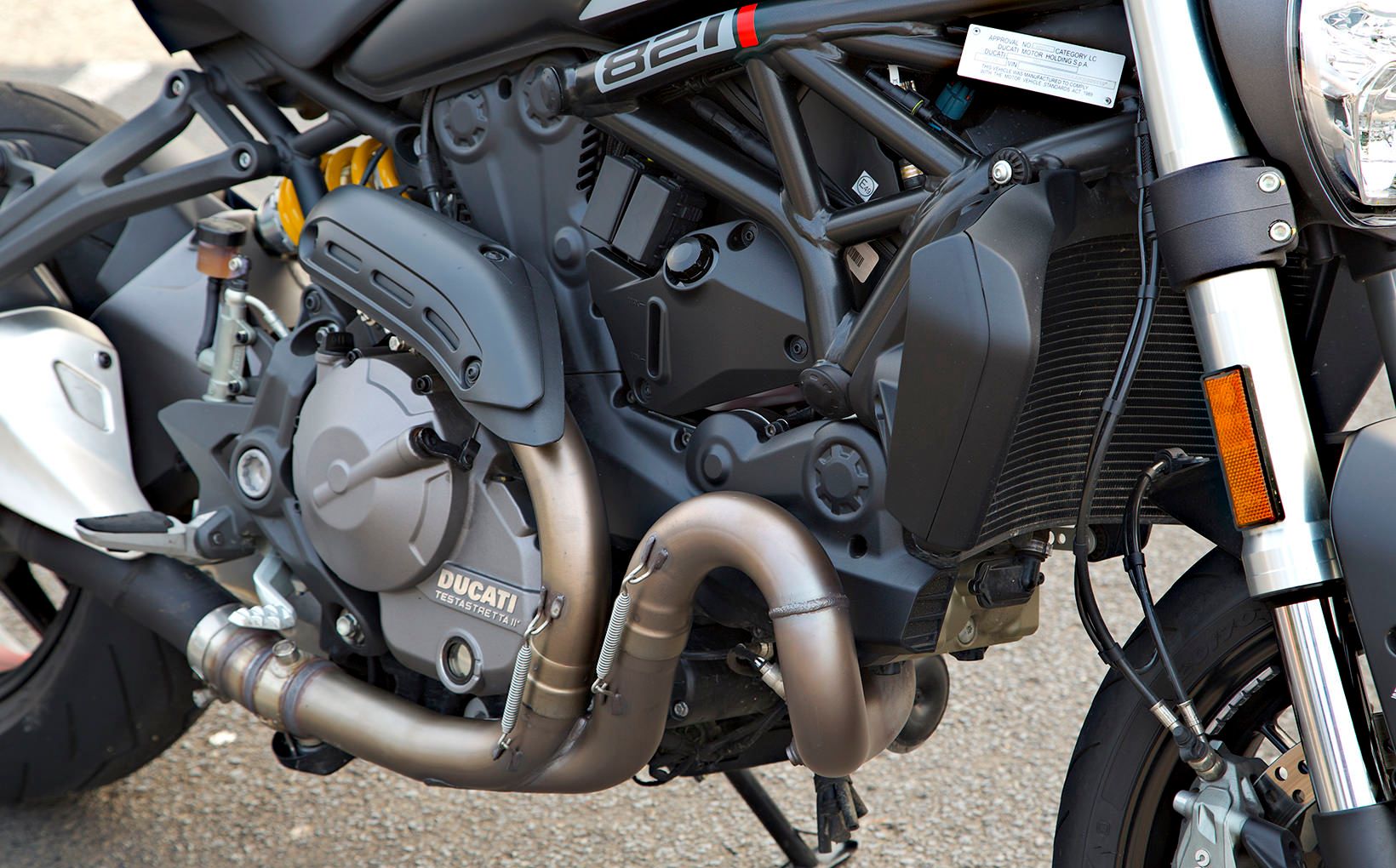 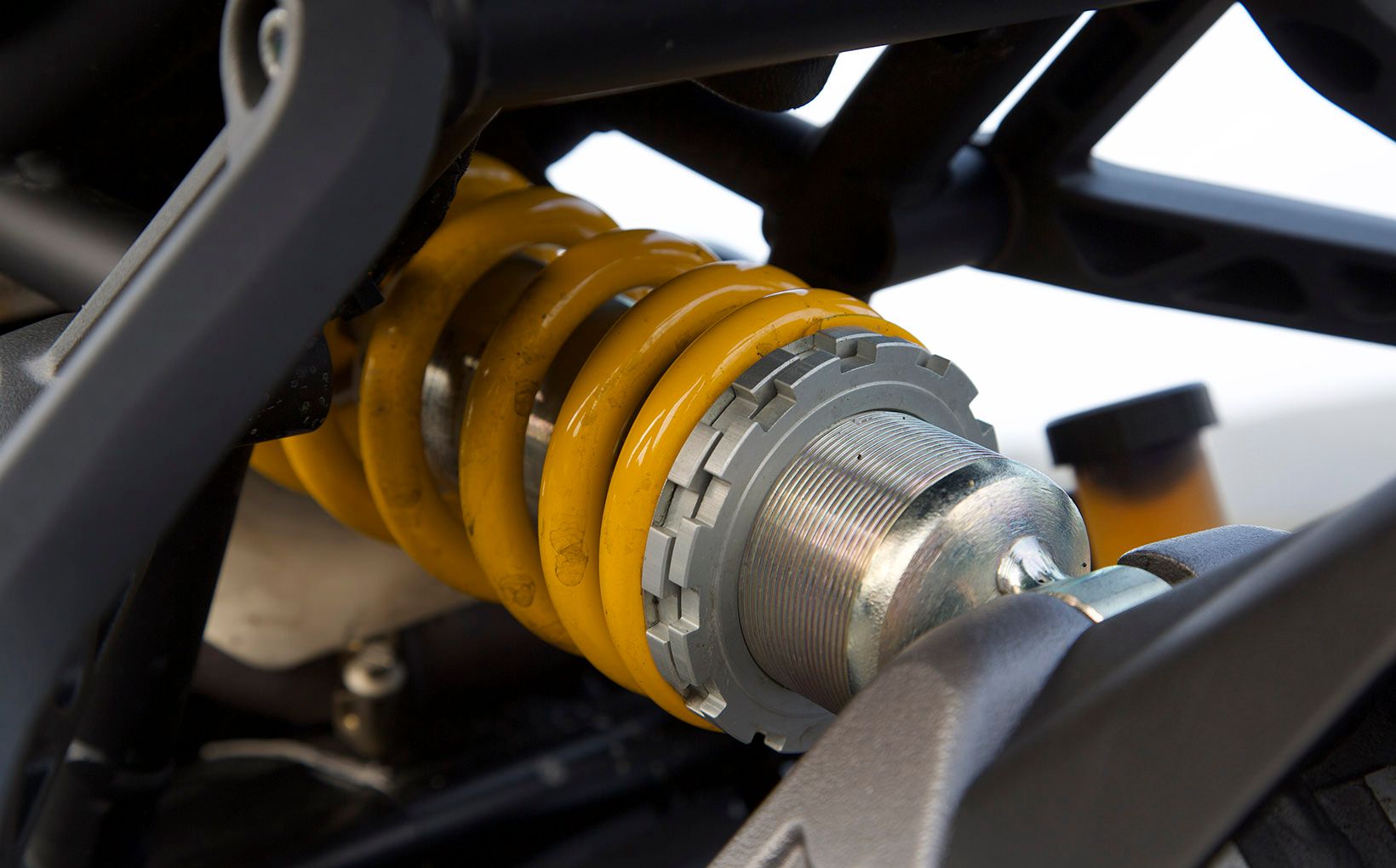 At $18,590 ride away, the Stealth is $1090 more than the standard version but for that you get the special paint, a small flyscreen fairing, a removable seat cowl, adjustable forks and an excellent bi-directional quick shifter. On the freeway the diminutive screen does push some air over the top of your helmet and, with its vented design, also seems to help reduce buffeting and noise by making the airflow more laminar. The pillion-seat cowl helps finish the back-end off nicely but is a little fiddly to remove, requiring an Allen key to undo two bolts under the seat (screw the bolts back in the holes for safe keeping while the cowl is off). I’m reliably informed the rear seat is pretty comfy for grown-up-sized buttocks and the passenger-pegs aren’t too high either. There are also hidden grab handles moulded into the underneath of the seat to ensure your better half stays put when you’re demonstrating the bike’s fruity 86Nm away from the lights.

The quick-shifter is excellent and works extremely well where you’ve got space to stretch the bike’s legs towards the top half of the tacho, although less well in town where you’re better off using the cable-operated clutch lever the old-fashioned way. On the mend from a pair of recently busted wrists, I very much appreciated being able to bang up the light-action box on full noise without bothering my left hand, and stomp down a bunch of gears without having to blip the throttle with my right. Once you’ve tried it, you’ll be ruined for bikes that don’t have this feature.

As on previous versions, the 821 comes with a suite of electronics controlled through an intuitive TFT display. An up/down toggle switch on the left ’bar moves between various menus and options while long or short presses on the indicator switch select and confirm changes to individual settings. I managed to figure it out without reference to the manual and, once you’ve been through the menus a few times, you will too. Nit-picking, my personal preference would be for the scrollable information windows to be a bit bigger and the time-of-day clock permanently displayed.

Within the de-rigour electronic safety package on the 821 are three rider modes. In order of most fun to least: Sport, Touring and Urban. They have a progressively softer throttle response linked to more intervention from the ABS and TC. Urban might just as easily have been called Rain as not only does it make the throttle feel like an elastic band, it also cuts power output to a very pedestrian-feeling 75 horses, ramps up the ABS to maximum and TC to level six of eight.

Touring mode has full power but a slightly soft throttle take up, which I found to be excellent when carrying a pillion to avoid clacking helmets every time I got on or off the gas. Sports mode is as direct as it gets and winds the ABS and DTC settings back too. The level of intervention in any mode can be edited by the rider and stored as the default. So if, for instance, you’d like your Sports mode to be as hairy-chested as possible, you can turn the ABS to level-1 and TC off entirely and it’ll stay that way. 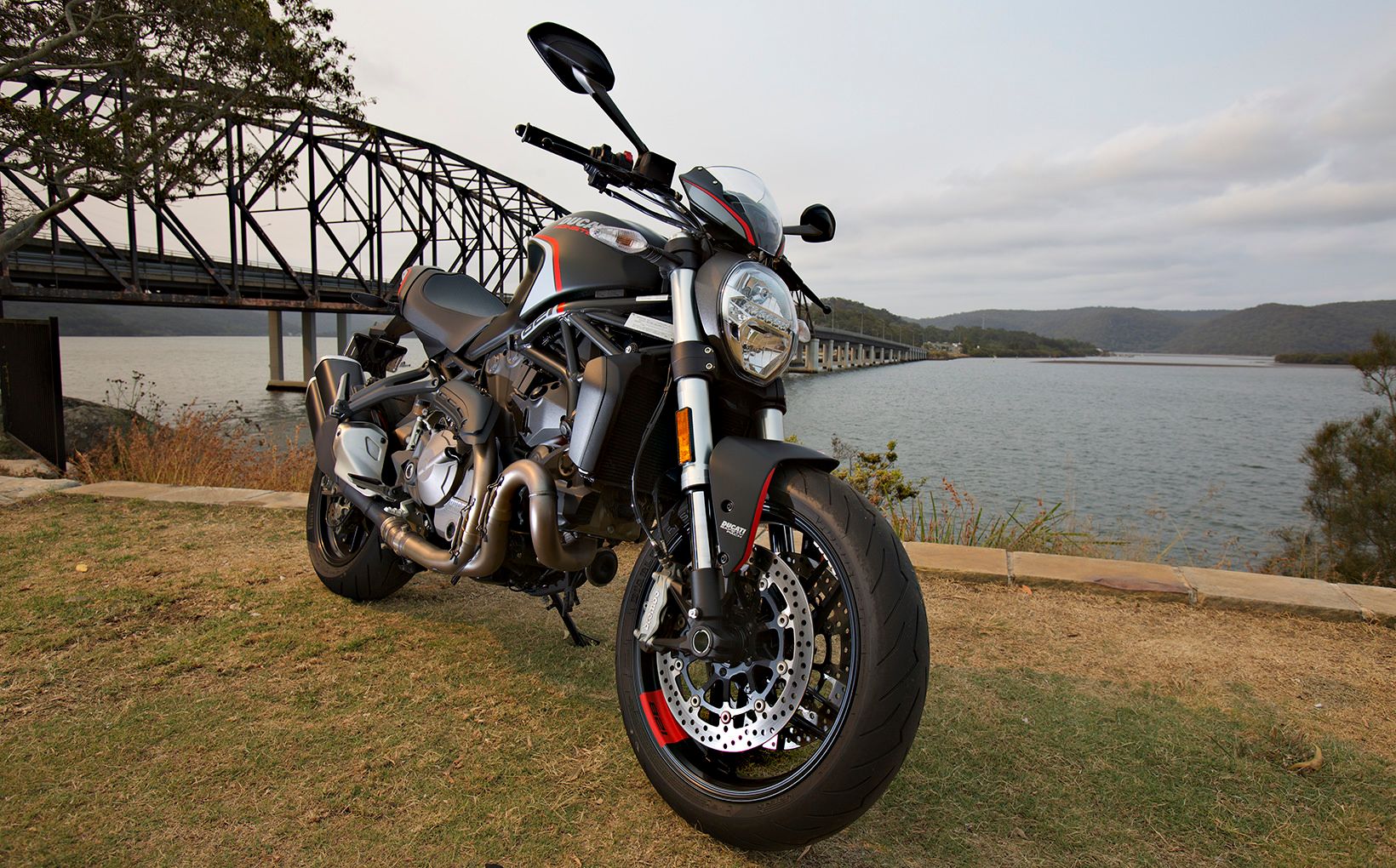 Aside from the most sensible ergonomics of any previous Monster, seemingly drawn round a human rather than a gibbon, the two characteristics that really drew me to the 821 right off the bat were the handling and, as intimated, the engine. This version is no different and the bulging bottom-end, giving way to a real punch in power once you get above 7000rpm, makes it easy and fun to ride in any circumstance. Add in the quick-shifter and it’s simplicity itself to keep this thing on the boil when you drop the hammer.

The immaculate fuelling helps keep the thing composed when on partial throttle openings mid-corner and the smooth pick-up getting on the gas at the apex means you don’t even notice the transition. Sadly, the standard twin pipes don’t make much of a racket to announce your heroic efforts to the world, but the intake roar from the airbox fills the void, egging you on to open the throttle harder and hold it on longer just to hear the glorious bellow. None of which would be much use if the thing didn’t go round corners: worry ye not then, as this Monster has just about the sweetest and most neutral steering of anything we’ve ever pointed at an S-bend. It may not be the quickest thing on the planet from bolt upright to dragging a ‘peg (in part due to the very rounded, rather than pointy, profile of the grippy Pirelli Diablo Rosso III tyres), but once in the turn, the rider has nothing more to do: it’ll hold a line perfectly and I’m pretty sure you could let go of the ’bars and it’d still get around.

It feels so confident on the edge of the tyre you’ll find yourself using big lean angles and loads of corner speed at every opportunity. The suspension also comes to the party with excellent damping rates out of the box (carrying an 80-kilo rider), making it plush to ride in a straight line and totally composed everywhere else. If anything, I’d just wind some preload into it if I was planning on taking a pillion regularly.

I haven’t mentioned the brakes yet simply because they just do the job without making a song and dance about it. Running very cool radial M4.32 Brembo monoblocs and 320mm rotors, they’re not overly aggressive, perhaps due to the conventional master cylinder at the handlebar, but there’s bucket-loads of power when needed and superb feel at the lever, which is exactly how brakes should be. 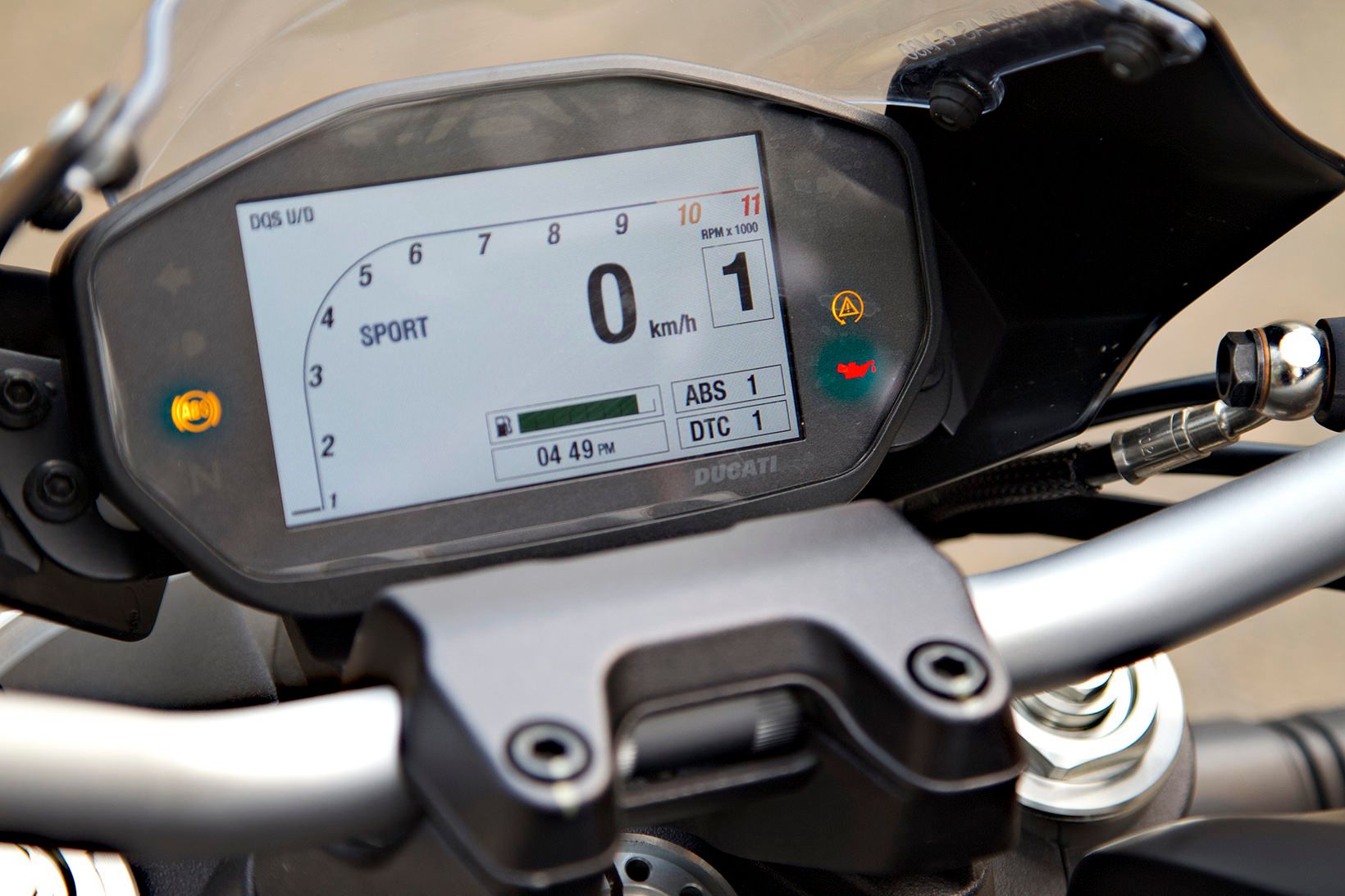 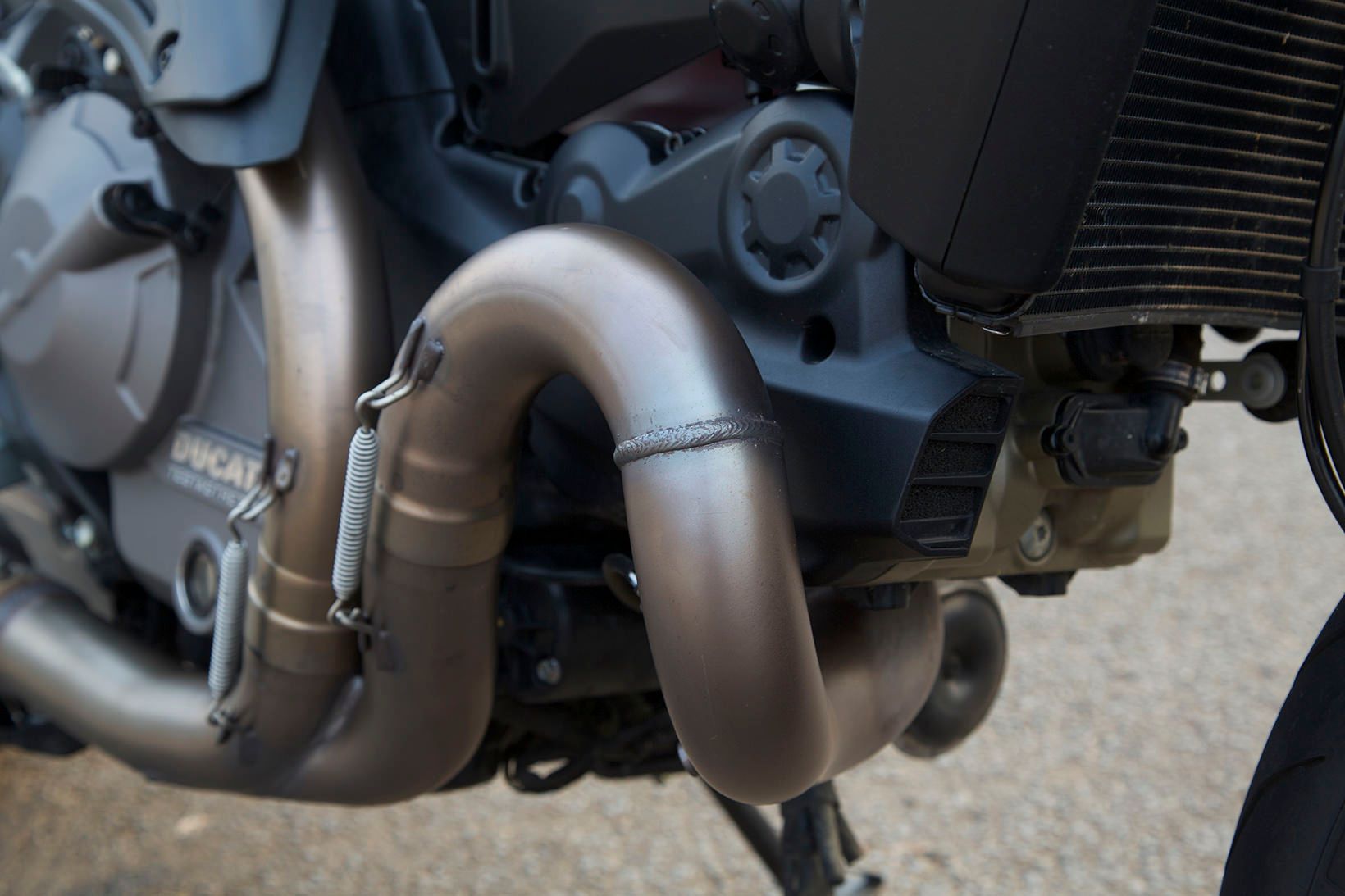 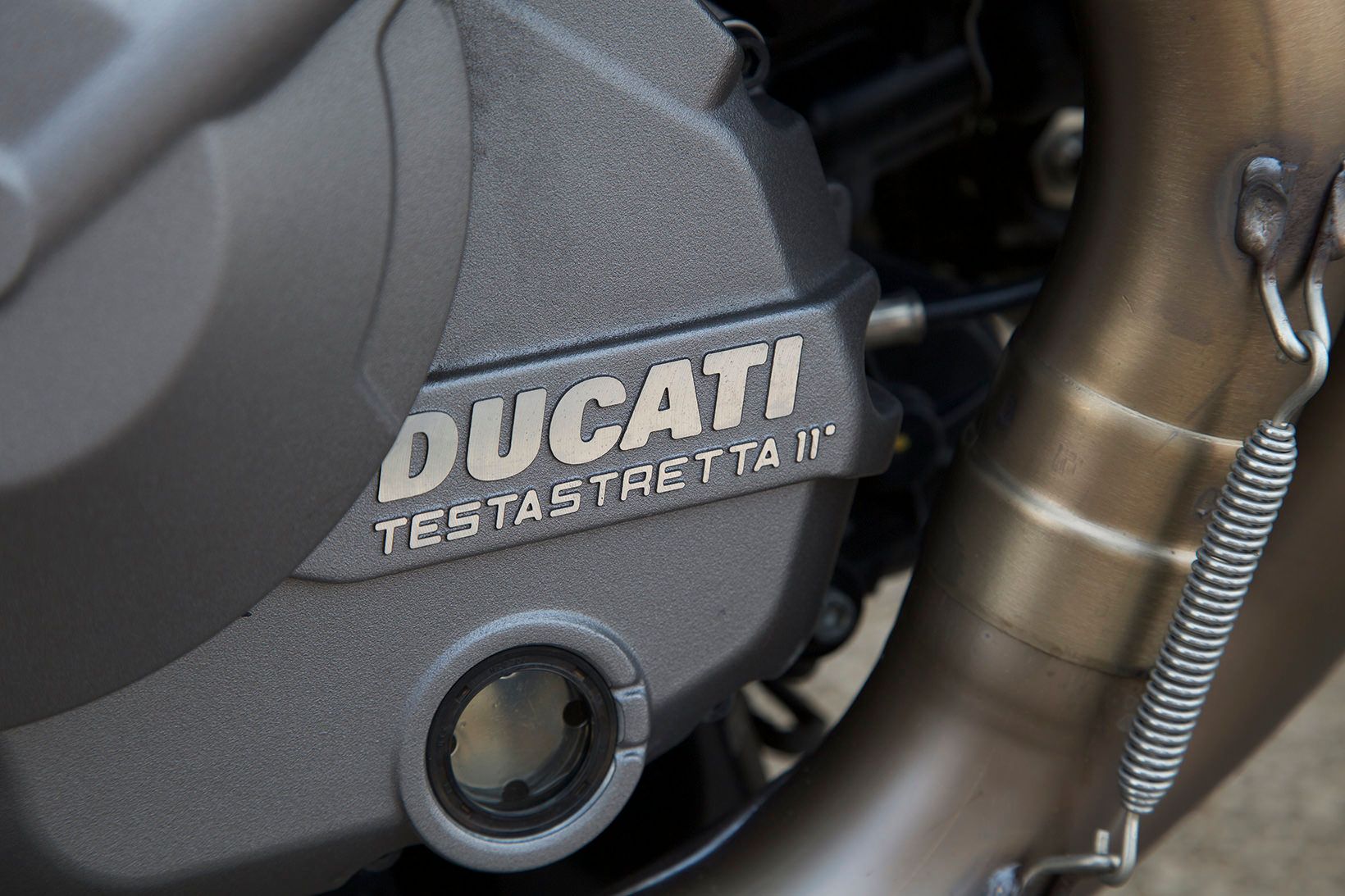 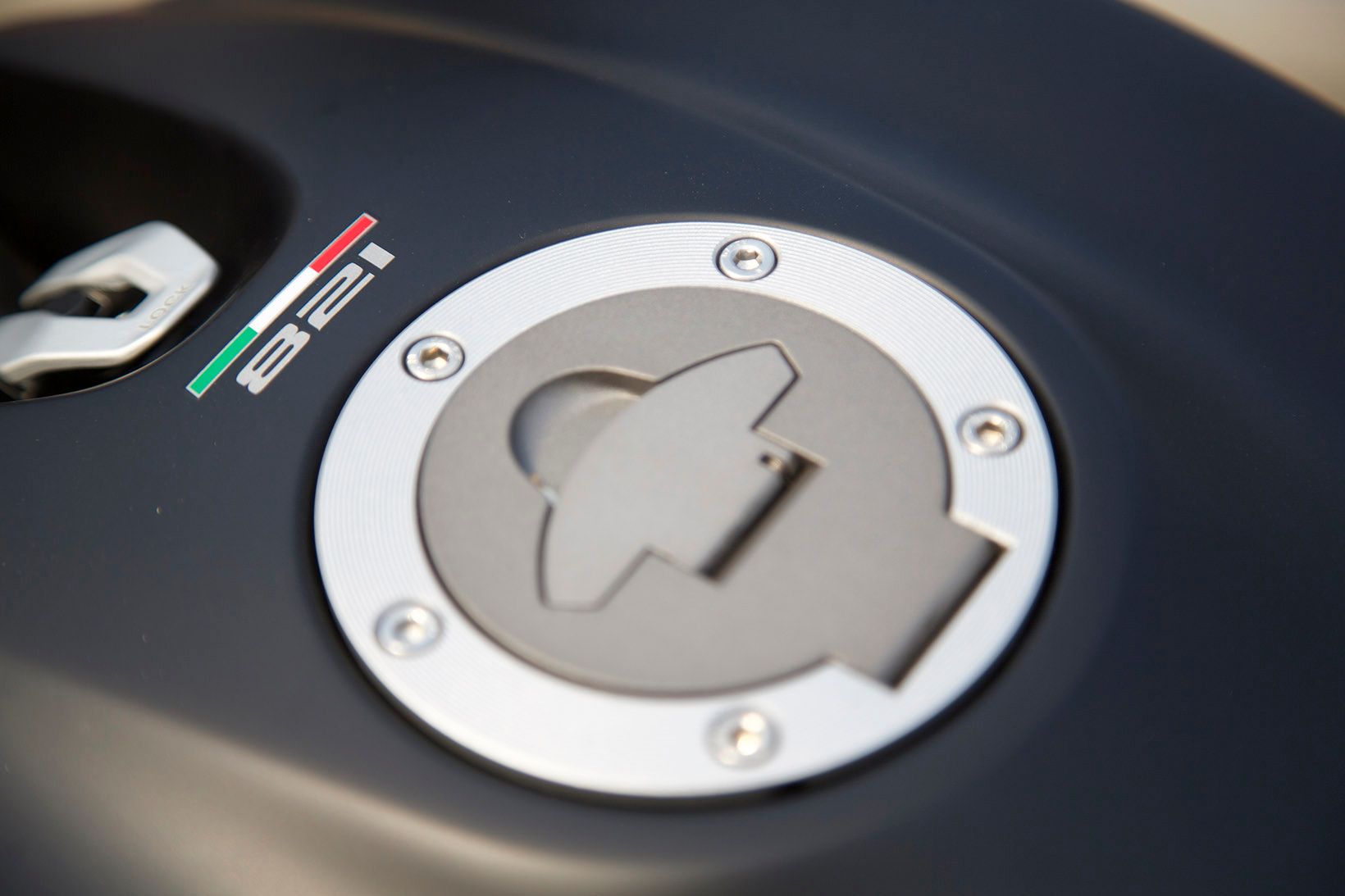 The bike’s 16.5-litre tank gives a range of about 200km from fuel light to fuel light at the 6.4l/100km rate we achieved in mixed riding, with about another 50km to bone dry. The luxuriously padded and broad seat is easily comfortable enough to make this achievable in a single sitting … pun intended. A full day in the saddle is totally realistic, especially with the lack of vibration from the motor, making this a viable tourer if you can find a way to carry some luggage beyond the tank and seat bag offered in the accessories list.

As a commuter, the Monster scores big points with excellent low-speed balance and handlebars narrow enough to let you squeak through most gaps in traffic. The upright riding position gives the rider great vision and the healthy grunt makes it easy to surf from one gap to the next without bothering the gearbox overmuch. The mirrors could do with an extra inch in the stalk mind you, as half of the view is just elbow. Also, the steering lock is slightly less than expected, meaning you’ll be up against the lock-stops sooner than you think if you’re really threading the needle.

Refinements and thoughtful inclusions to this current Monster are everywhere you look. For instance, the seat has a two-position height adjustment, being either 785mm or 810mm, facilitated by simply removing riser blocks under the seat. It’s a two-second job, so well worth investigating how it feels for you. At just under six old-fashioned-feet tall, the higher position was my preferred option, with my knees bent about as much as I’d like when riding on the balls of my feet. Even the tool kit comes to the party, with an Allen key to fit the seat cowl and a braided wire rope that allows you to attach your helmet securely to the bike when you’re parked up. Nice touch. 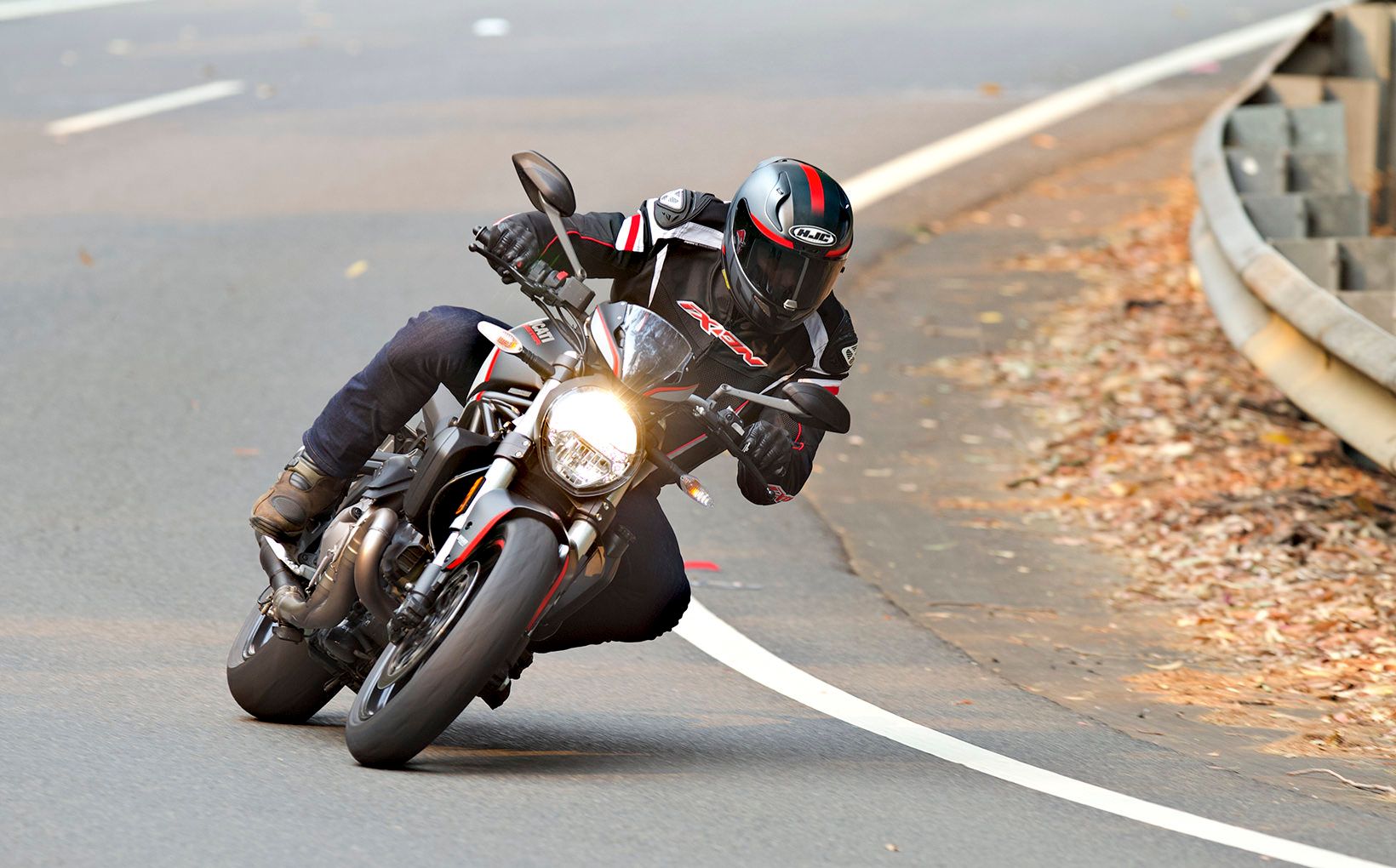 Often when a model is reaching its end of life, a bunch of snazzy special versions start appearing to help boost sales and get rid of all the left-over units. Given that the Monster 821 has been around since 2016, you’d be forgiven for assuming the Stealth is just such a marketing ploy. Well I’m very happy to report that that’s not the case and you can rest assured that, in our humble opinion, the best, most capable and accomplished middleweight Monster ever will be with us for some time yet. That shouldn’t stop you racing to the shop asap for a test ride mind you — you’ll love it! ARR