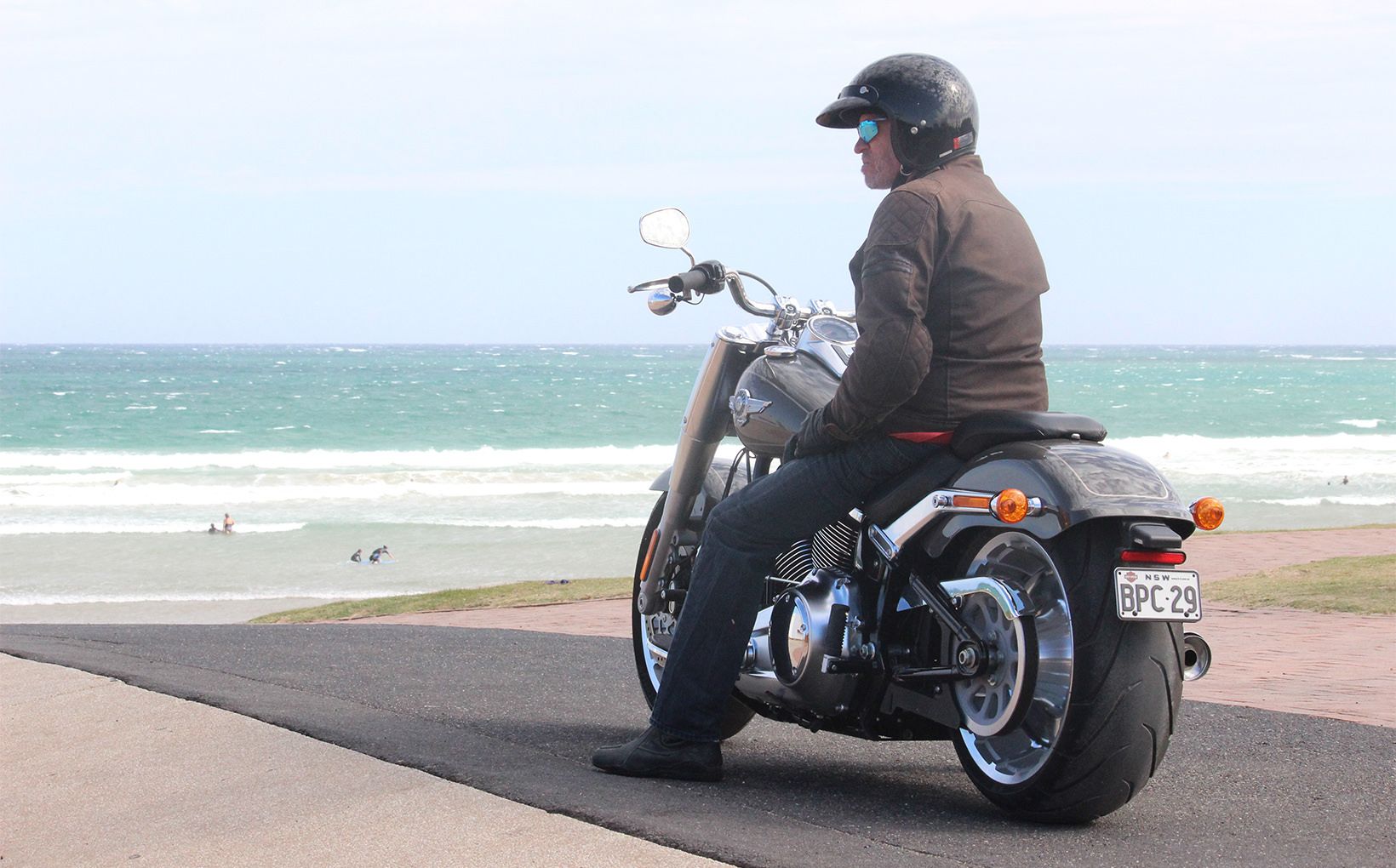 When the Fat Boy landed down underway back in 1990, there were a few sniggers about that name. You have to remember that was 28 years ago — yes, we know — and there were plenty of blokes known for a second helping of Christmas pudding rusted on to the H-D shield. Would they get the subtlety of the gag?

Well, the resounding answer was and remains “yes”. In fact, the bike went on to become the brand’s best seller in Australia for most of that time. Yep, it sold like high cholesterol hotcakes.

There was a good reason for all that because the Fat Boy strategically repositioned the H-D phenomenon. It was all about toughness. From the cast-solid wheels to the muscular masculine lines, the bike screamed Alpha Male and a lot of blokes like that sort of thing. 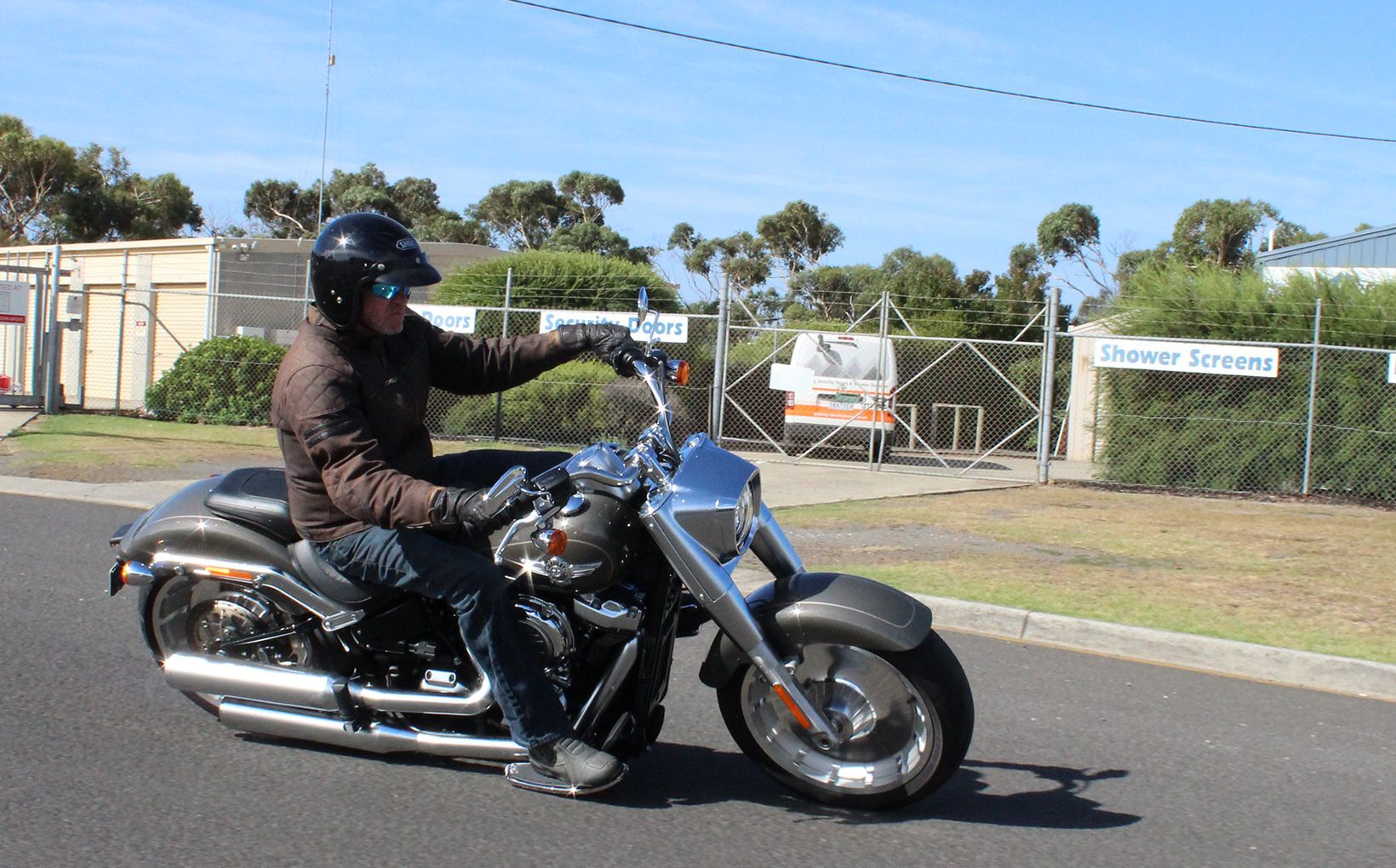 "It's all there in the numbers; turn-in ain't gonna be this fella's long suit. And it's not."

The bike stayed true to its roots, undergoing some modifications over the years and gaining the new twin cam 1450cc engine in 1999. The 15th anniversary in 2005 was marked with a custom version for one year only with custom paint options, custom wheels, Screaming Eagle engine and added accessories. In 2006 the Fat Boy got a larger twin cam 1584cc donk and a much-lauded six-speed gearbox.

Fast forward to 2018. The bike is a very different beast to that first 1340cc jobbie that plumply rolled off the production line in Milwaukee, late last century. The new model is offered in two variants: the FLFB 1746cc (107 cu in) and FLFBS 1868cc (114 cu in).

The 45-degree V-Twin persists. The engine still uses the old pushrod system, but instead of just a pair of poppets in each head, the engine runs four for a total of eight, hence the descriptive moniker. Eight-valve tech is a giant step for Harley-Davidson so going very literally there was the go. Americans? Literal? Who’d have thought! 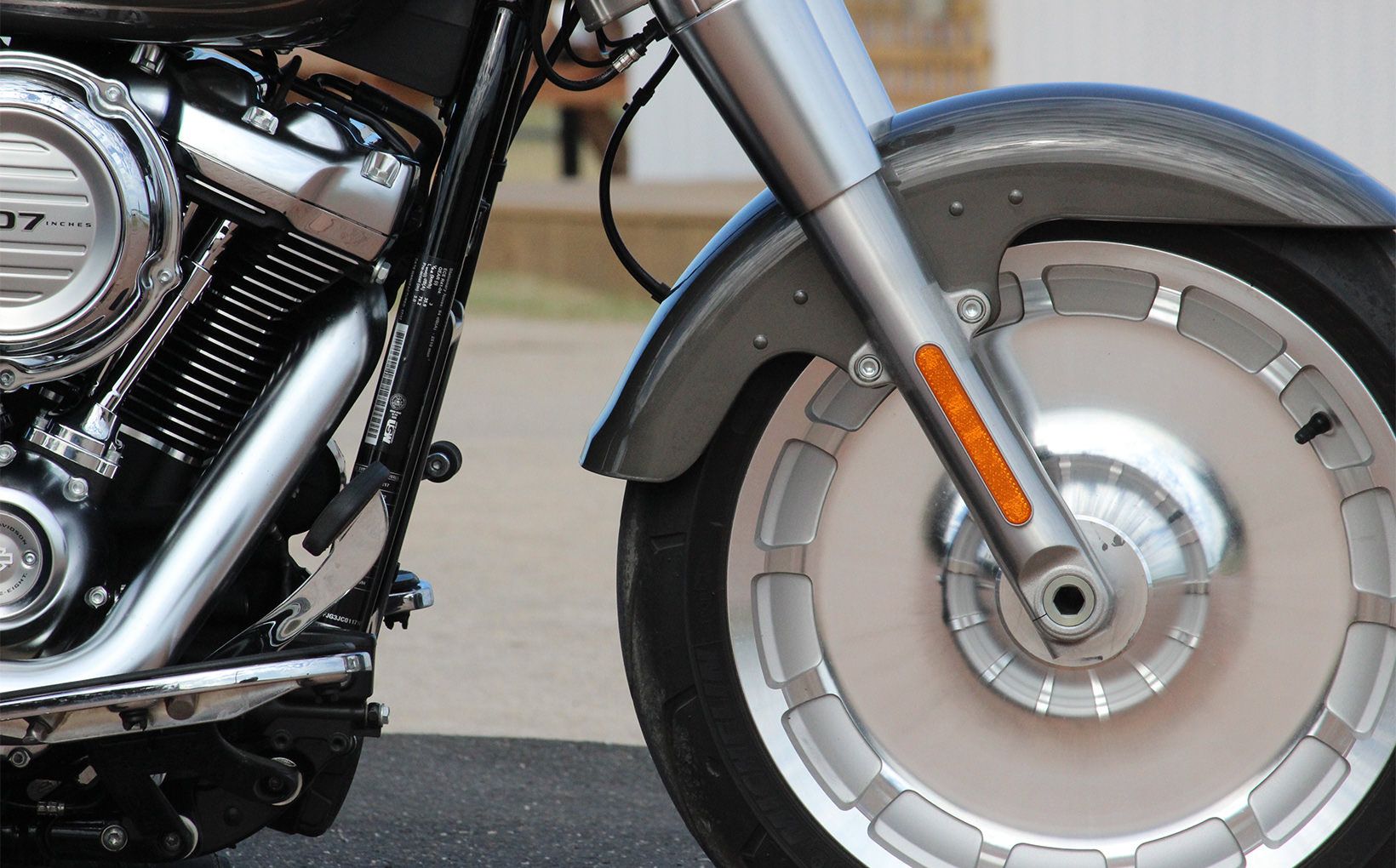 The solid disc wheels announce the bike as a Fat Boy, loud and clear.

A lot has been said about the new Milwaukee Eight engine, in these pages especially, so we won’t labour things too much.

What I am prepared to say is that this donk is a massive leap forward for the motor company. It is smooth, looks the duck’s guts in situ and pulls better than any before it. I reckon this is the most significant mechanical step Harley has made since the Evo, and that’s a big fat call. I love this engine. Simple as that.

Our test bike was fitted with the 107 variant, which offers 145Nm, and that’s where the fun is to be had. Redlining the crapper outta this thing is a little pointless, but there are add-on bits (natch) from the massive H-D catalogue to get more for your money and raise that redline. I wouldn’t bother, but squillions will. To each his own, as the great Cicero conciliatorily opined. 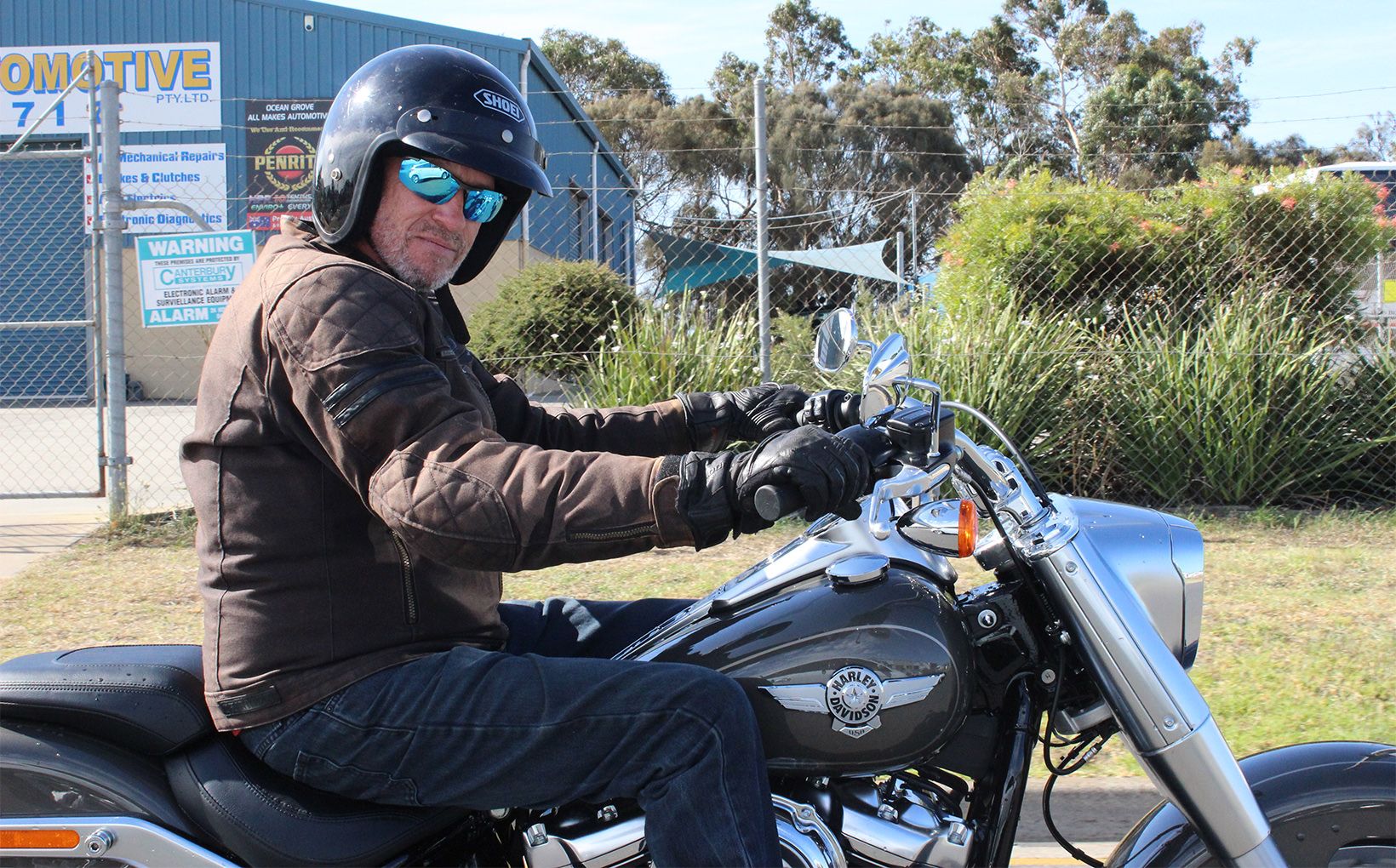 The 2018 bike sports new suspension, wheels and tyres, while a new and stiffer steel tubular frame is featured on the entire Softail range.

The 2017 Touring models saw the introduction of dual-bending valve front suspension and the set-up has now reached the Fat Boy. H-D boffins reckon it delivers damping performance similar to that of a cartridge fork, offering more responsive damping dynamics.

Suspension response is quite the highlight. The bike is easy to sit on for long periods of time and the low-speed damping (an area that is particularly hard to get right on a heavy motorcycle) is impressive. Once you are up it for the rent, there are no wallows or rowing at the tiller, inspiring as much confidence as you dare. 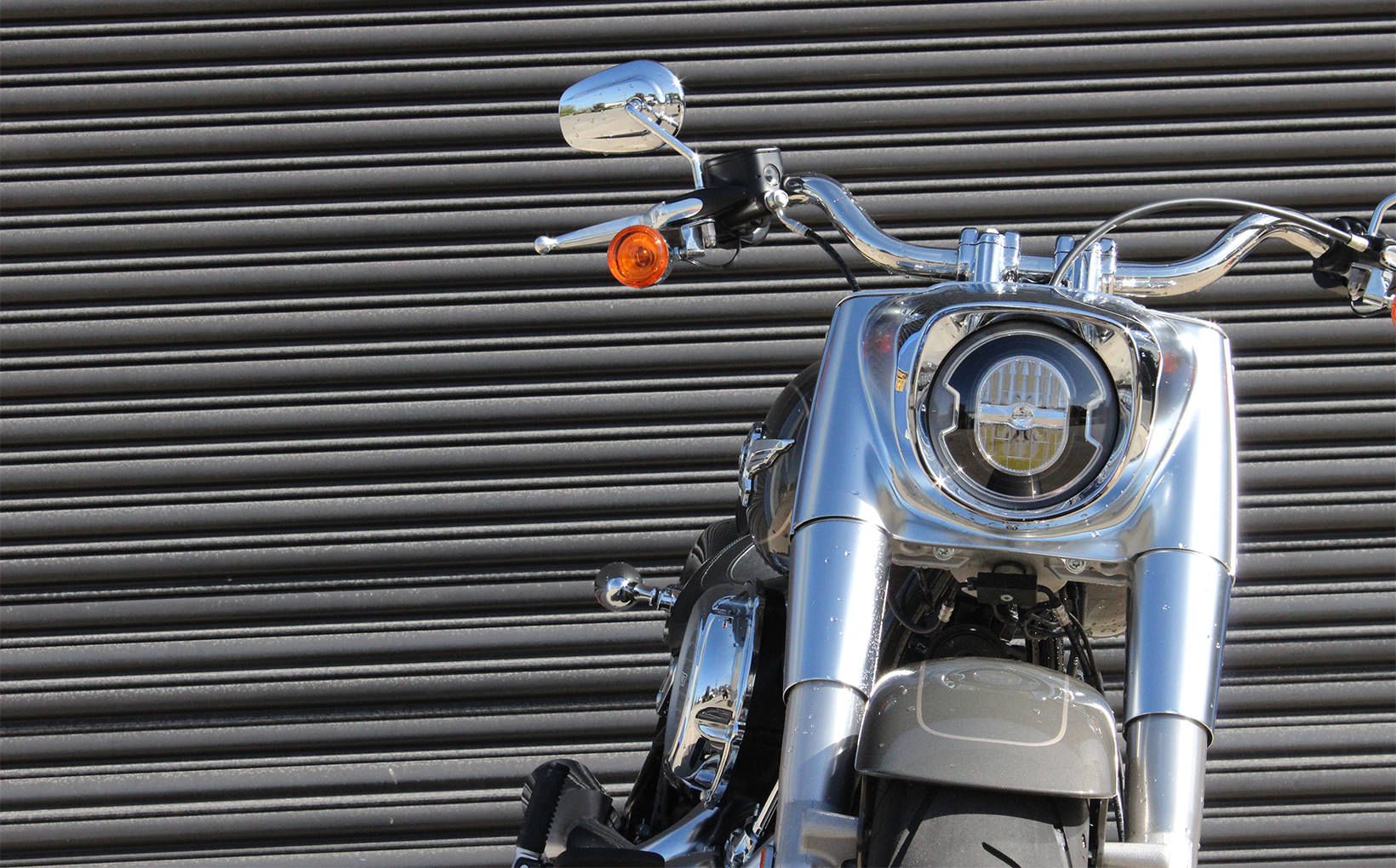 The new headlight shroud polarises opinions. What do you think?

There are always those footboards and their proximity to terra firma to consider and you’ll be leaving scrapies all over the shop if you are having a real dip. In short, this is one that loves its going long-legged. Bung it into a series of sharp mountain bends and it cries “enough” pretty early and you’d best just get along at a satisfying clip, rather than scratching  hard. Still, that’s exactly what this thing is all about. Loping along, with that ever-satisfying mechanical orchestra playing your favourite exhaust ballad beneath you. The bike is evocative. And, there are some brands that would kill for 10 per cent of the road presence that is to be accessed by the owner of a big H-D. Especially a Fat Boy.

As mentioned, the new frame is 65 per cent stiffer than the previous arrangement, and the chassis is 5.89kg (15 per cent) lighter. All that adds up to a bike that is 15kg lighter. Harley- Davidson weight conscious? What the hell? 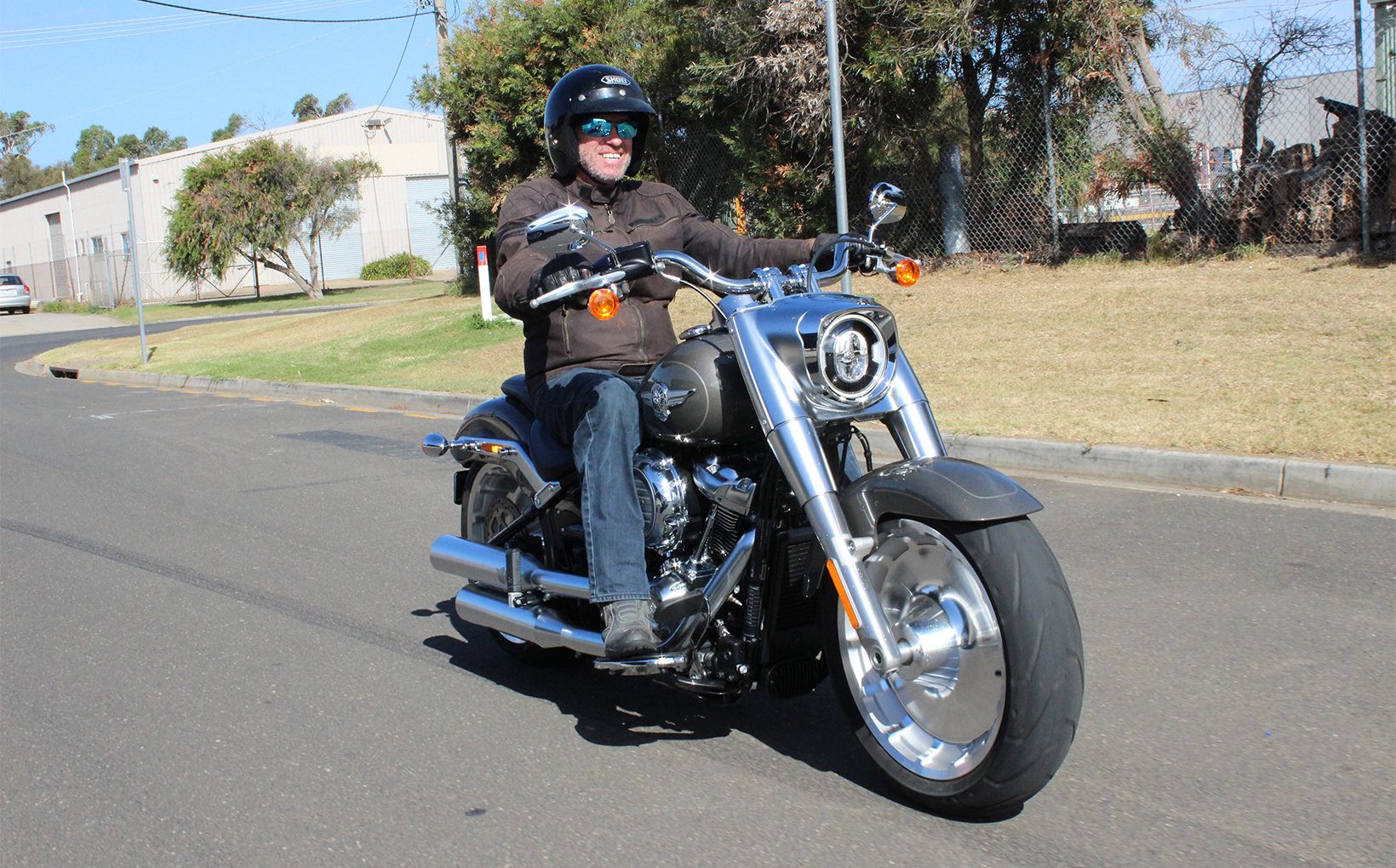 “I reckon this is the most significant mechanical step Harley has made since the Evo, and that’s a big fat call. I love this engine. Simple as that”

Harley is keen to point out that the monoshock rear suspension has been reworked to “improve ride quality, traction and control” and it’s now preload adjustable via a pretty simply accessed knob below the seat.

Turn-in is pretty lazy. Let’s face it, that front hoop is 160/60 on the 18in Lakester rim, the biggest that Harley has ever placed on one of its models and the rear is a 240/40, again, on an 18in solid rim. It’s all there in the numbers; turn-in ain’t gonna be this fella’s long suit. And it’s not. If you are looking for sporty handling, I’d almost certainly be looking elsewhere in the H-D catalogue.

Left: Clear and bold. Instrumentation doesn't stray from the tried and true. Middle: The Badge. Still carries a lot of red, especially when adorning a Fat Boy. Right: Easy preload adjustment for the rear suspension is via this knob below the right side of the seat.

Where it does shine, though, is on freeway and sweepy going, where that wheelbase offers remarkable stability and confidence-inspiring motorcycling. It comes alive in such operations and who doesn’t get a fat smile when that sort of running is well negotiated?

Now to the styling of the big bugger. At first I wasn’t sure of that front-end look as the chrome fork legs blend away from the headlight shroud of satin chrome. It has grown on me, though, and the whole frontal area satisfies a very high-end fit and finish demand. 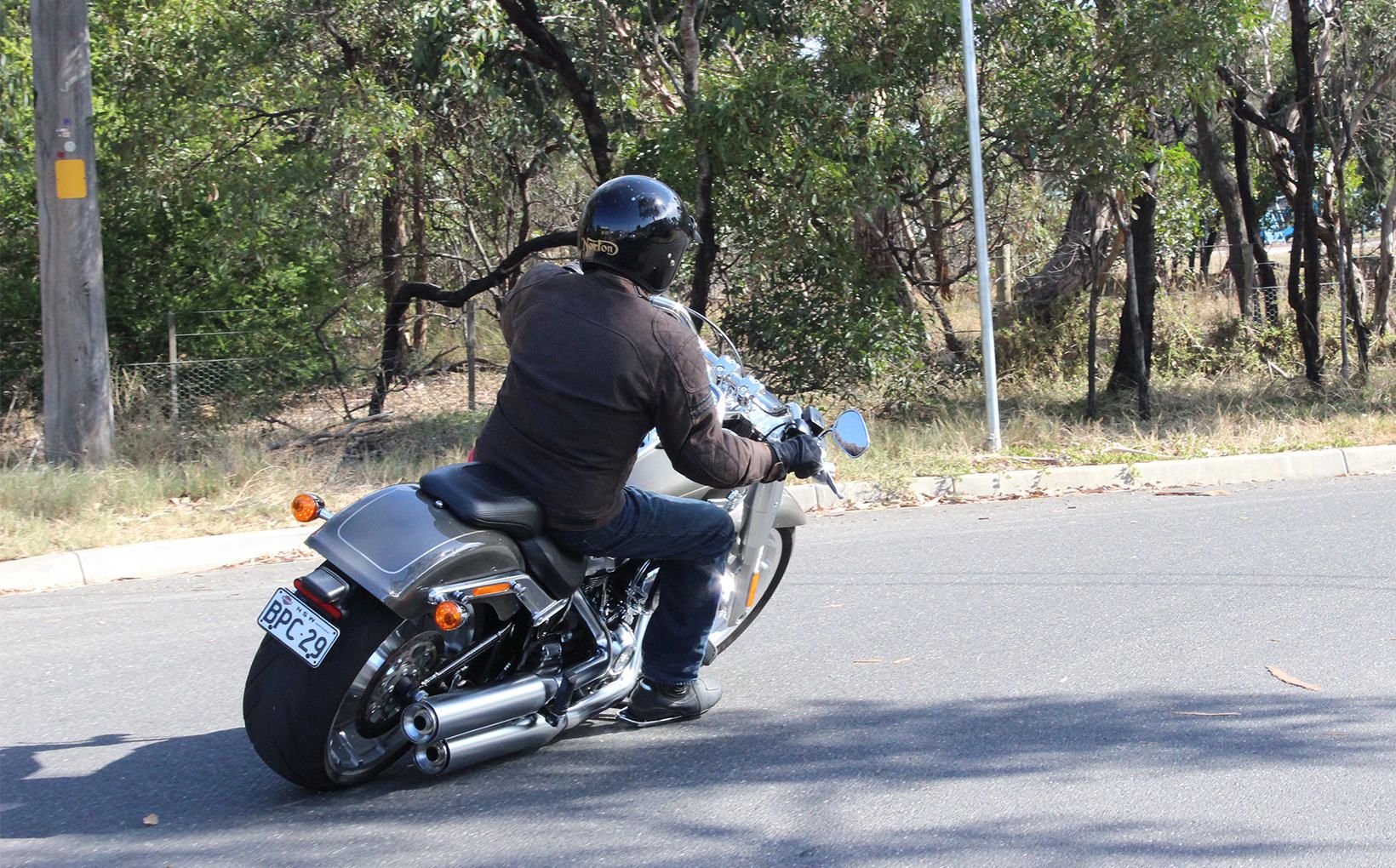 Clearance is improved with the new Fattie, but you'll be makin' sparks when having a dip.

Things that have jarred with me in the past with regard to finish have been well addressed with the new bike. Cabling is cleverly routed to minimise its visibility and there are few nasty lumpy fasteners and the like on show.

The seat rolls back beautifully and supports your toilet region like a Japanese dunny. It looks great and the line from the tank back to the upsweep of the seat is delightful.

The stacked pipes look super and there is a degree of rortiness that is louder and deeper than standard cans of old. This is because the testing system has changed and stock pipes now offer a bit more blurt than they ever have. Must be hurting the aftermarket industry a bit, but I’d be leaving the stockies in place. Jeez, am I getting old?

Road presence. This one has it in spades. It’s big, refined, and by far an improved motorcycle on its predecessor. It’s less brute to look at than in the past but holds its head up with pride. It has kinda grown up.

The engine is a peach and suits this application perfectly. It’s no sports bike, which might frustrate some, and if you are coming from a sportier part of town and considering a Harley, be aware of clearance shortcomings. They are there.

If, however, you want to get along at a good clip with your mates, hit the wide, open spaces or be the most popular dad or mum in your street, buy a Fat Boy. It’s a great thing.

Claimed maximum power: Not given