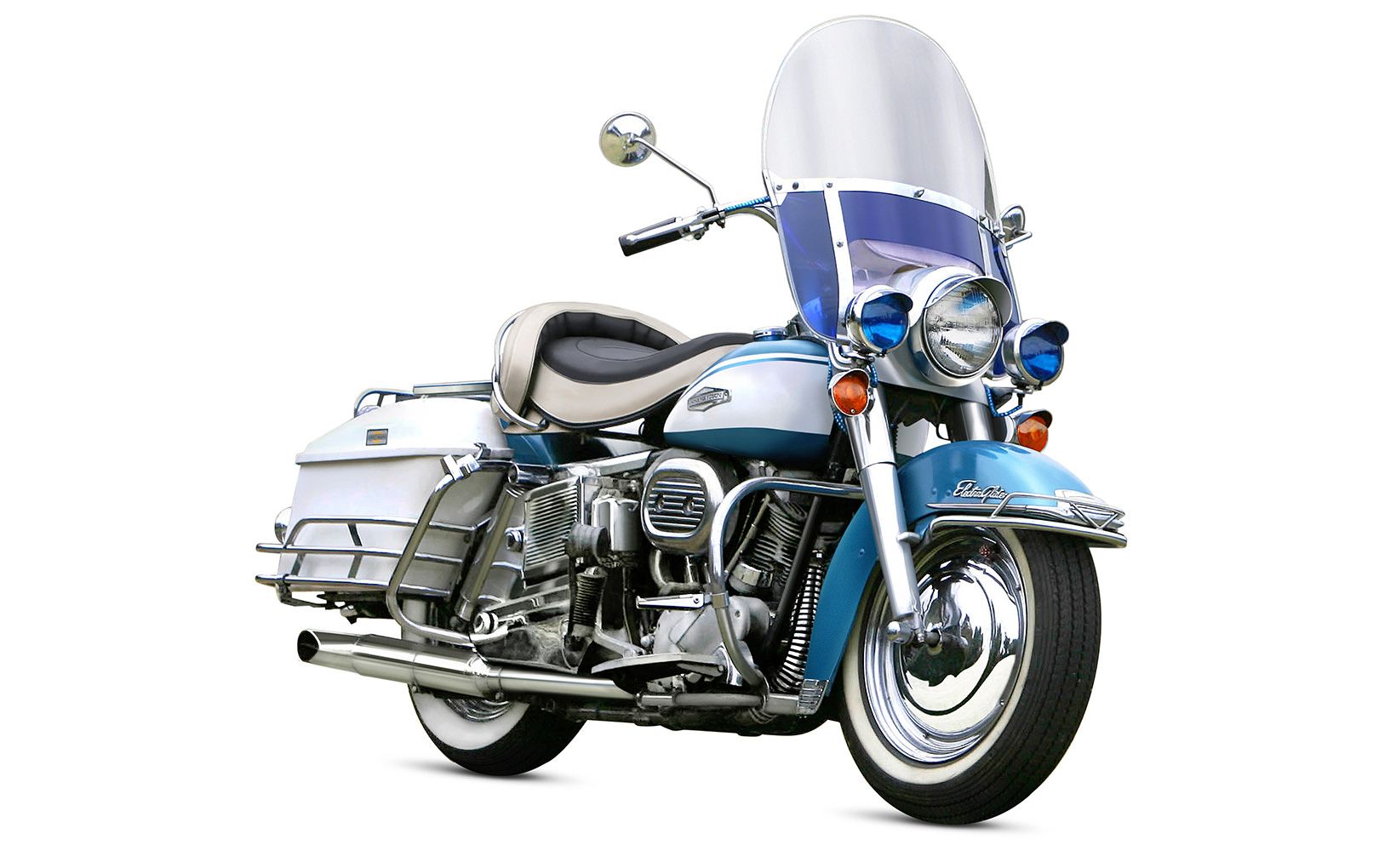 Many people don’t even think, ‘I am getting a motorcycle’, but rather, ‘I am getting a Harley.’ Harley Davidson is thus among the most revered names in the automotive world and ‘Harley’ means a certain style of motorcycle as ‘Jeep’ means an off-road vehicle. The all-American company has made many enduringly famous models and the Electra Glide, which has remained in production continuously from its 1965 launch to the present day – placing it fourth among the longest-enduring motorcycle models (the Harley-Davidson Sportster is second) – ranks high among them.

When Harley-Davidson launched its continent-crossing Electra Glide in 1965, a young actor was planning a new type of motorcycle for a movie called Easy Rider to celebrate the youth revolution. While the Easy Rider Chopper, designed by Cliff Vaughs and Ben Hardy to Peter Fonda’s prescription, was far removed from the luxurious Electra Glide, the two became inexorably bound up in Harley-Davidson’s future. 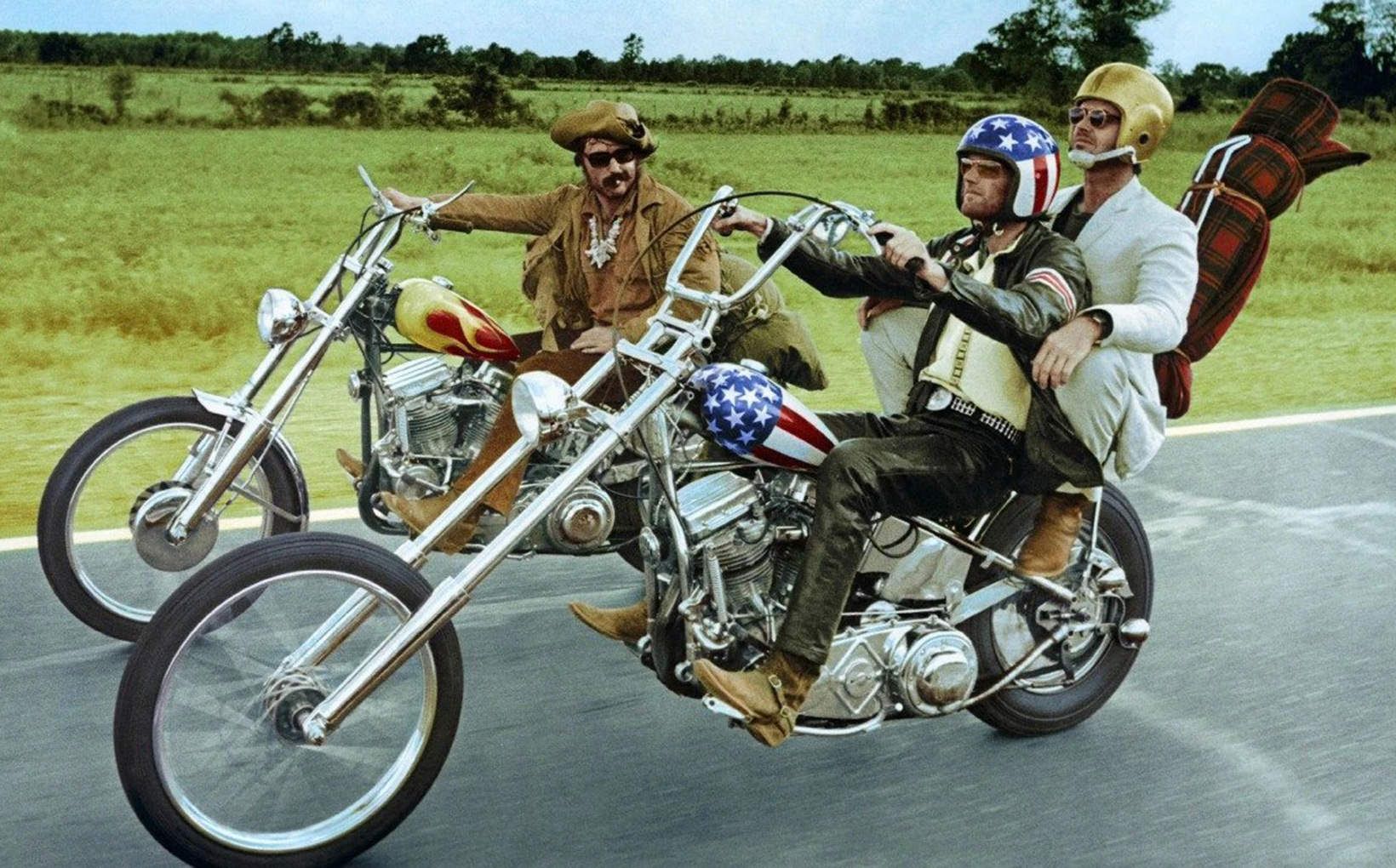 The 1969 cult movie Easy Rider celebrated youth and escapism like no other movie before it. As well as Peter Fonda and Dennis Hopper, it starred Harley-Davidson.
(Image: Hollywood Reporter)

Peter Fonda, son of Henry and sister of Jane, bought several used Los Angeles Police Department Harley-Davidsons at auction. These were low-compression 1200cc 1962 Model FLs. He got two of them dismantled and heavily chromed. He had the front forks sharply raked to a near-45-degree angle and another twelve inches of steel welded into them: Fonda was dreaming up his Captain America motorcycle. So-called ‘ape-hanger’ handlebars were mounted on the Wide-Glide front end. The Harley-Davidson Easy Rider Chopper was born and who could possibly guess how many buyers of the stock standard H-D Electra Glide in the decades re-imagined themselves as Peter Fonda and Dennis Hopper riding to freedom? Indeed, who could possibly guess how many Electra Glide sales right through until two-plus decades into this century, were related to Easy Rider? 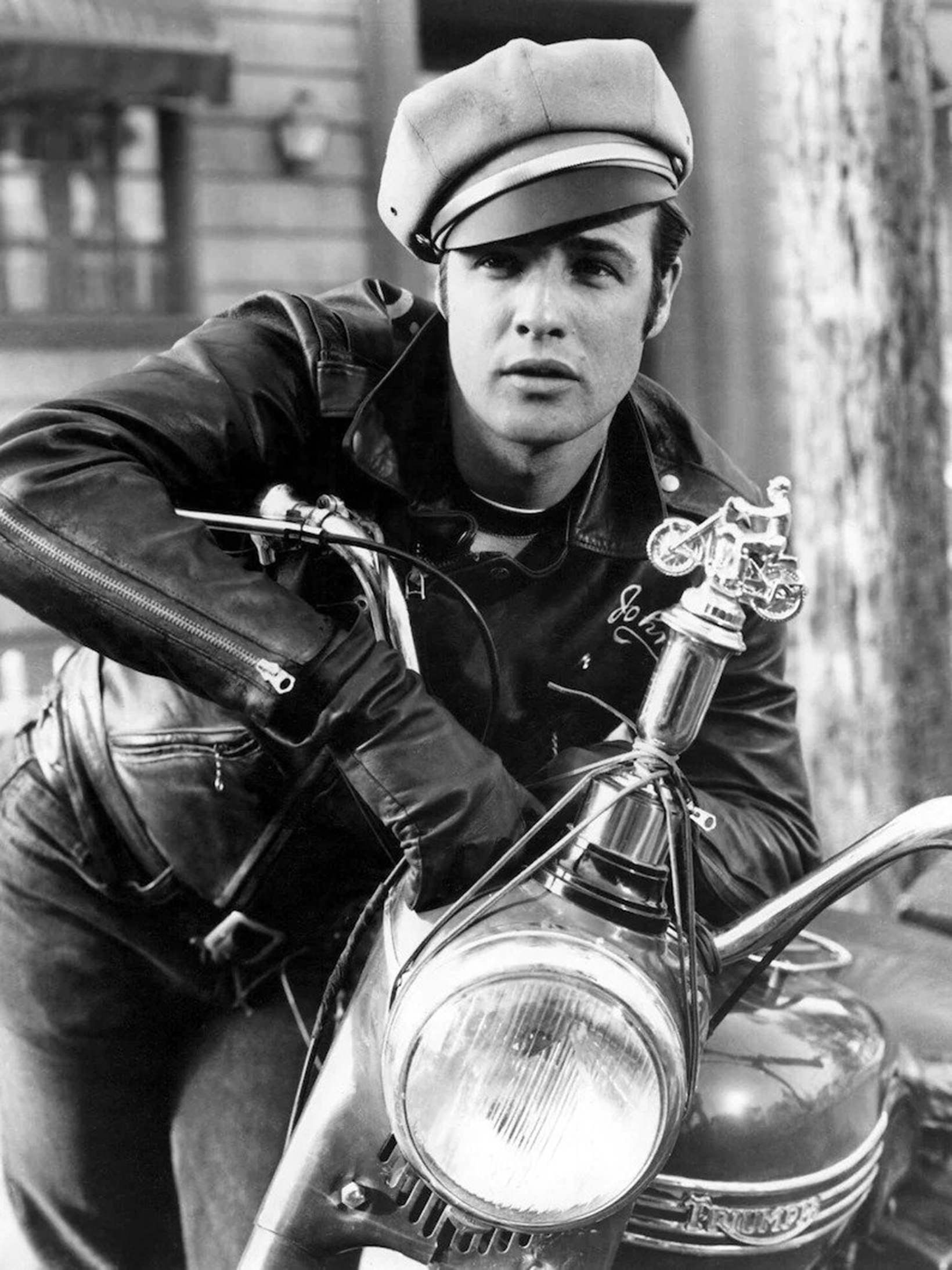 When The Wild One, starring Marlon Brando was released in 1954, motorcyclists were viewed as a fringe (and sometime hostile) element of US society.

In 1969 when Easy Rider was screened, motorcycling had a very different relationship to mainstream American culture than it had in the early 1950s: the motorcycle had become an object of a more widespread appeal rather than a symbol of menace. When Marlon Brando and his Triumph hit the screen in black and white in 1954, motorcycles were nowhere near as frequently sighted in the traffic as they were in continental Europe. The Wild One depicted the motorcycle rider as a cult member and anti-social, a rebel.

In the straitened years following World War Two, many Europeans bought motorcycles as their first form of mechanised transport; by the middle of the decade three-wheeler bubble cars began to bridge the gap between two- and four-wheeled vehicles. Thus the motor scooter and the motorcycle essentially superseded the bicycle as cheap transport. But in the US, relatively cheap used cars had been available since the mid-1920s, meaning motorcycling was more a matter of choice than necessity. In the aftermath of World War Two, as the US rode its enormous wave of prosperity, motorcycling remained essentially out of the mainstream (which doubtless helps to explain the menace depicted in The Wild One). 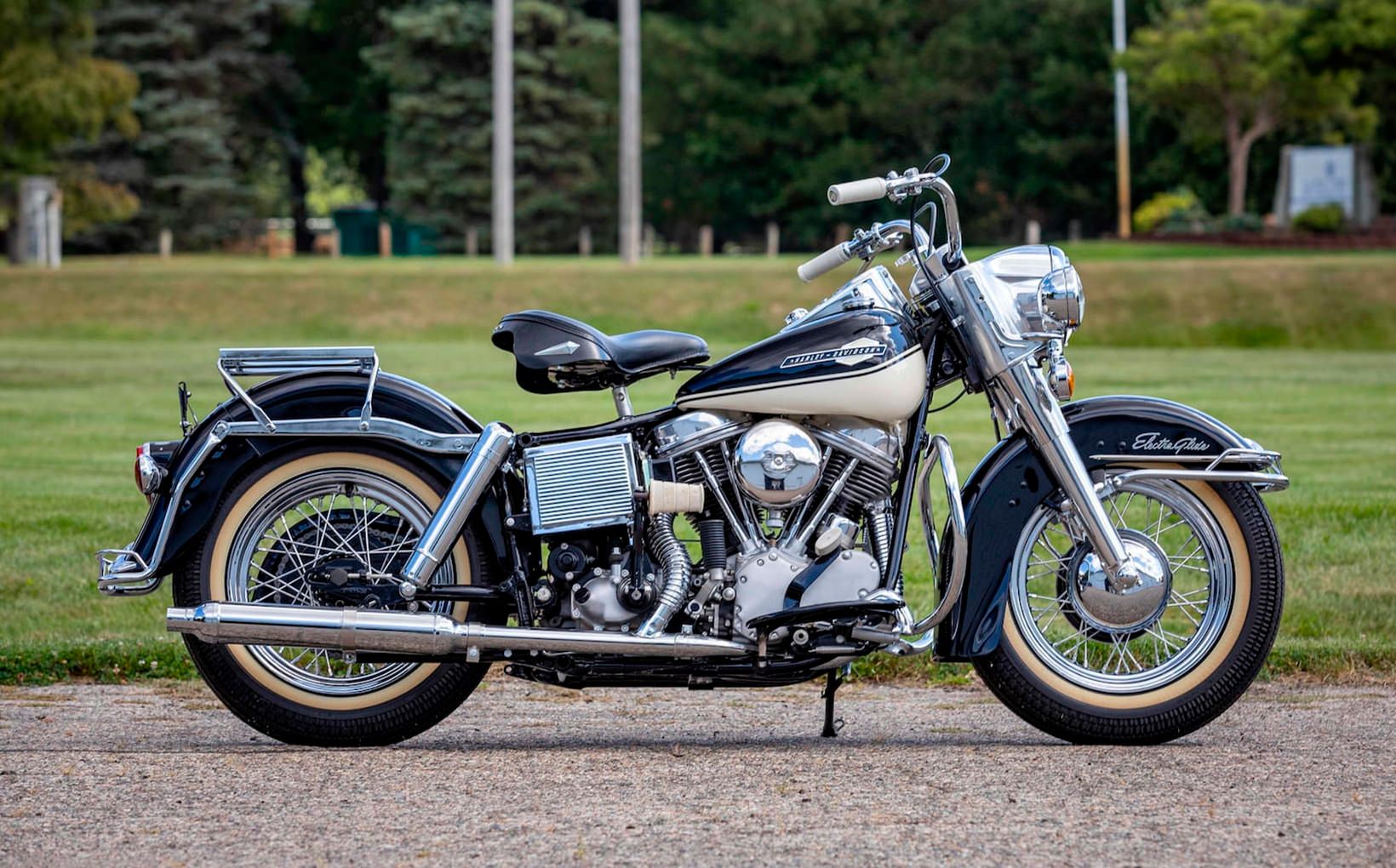 In 1965 the Harley-Davidson Electra Glide was to US motorcycles something like Cadillac was to cars – a kind of two-wheeled Eldorado!
(Image: Mecum Auctions)

It was not until the 1960s that motorcycles became fashion statements, along with mini skirts, recreational drugs and the coming of the counter-culture. (Remarkably, when one considers today’s ubiquitous Nanny State, in the making of Easy Rider, they smoked real marijuana!) Honda promised you would ‘meet the nicest people on a Honda’ – as if to counter the image of bad-boy motorcyclists as immortalised in The Wild One – and sold its small-capacity bikes in vast numbers. By the middle of the decade, not only Honda but also Kawasaki and Suzuki were dreaming up high-performance machines potent enough and of high enough quality to mount a major assault on the British industry. American enthusiasts, who had previously loved Triumphs and Nortons, began to buy the new breed of Japanese motorcycles. In 1969 Honda revealed its radical new CB750 Four, which was about as different a motorcycle from the Easy Rider Chopper as could be imagined and designed especially for the burgeoning US leisure motorcycling industry. 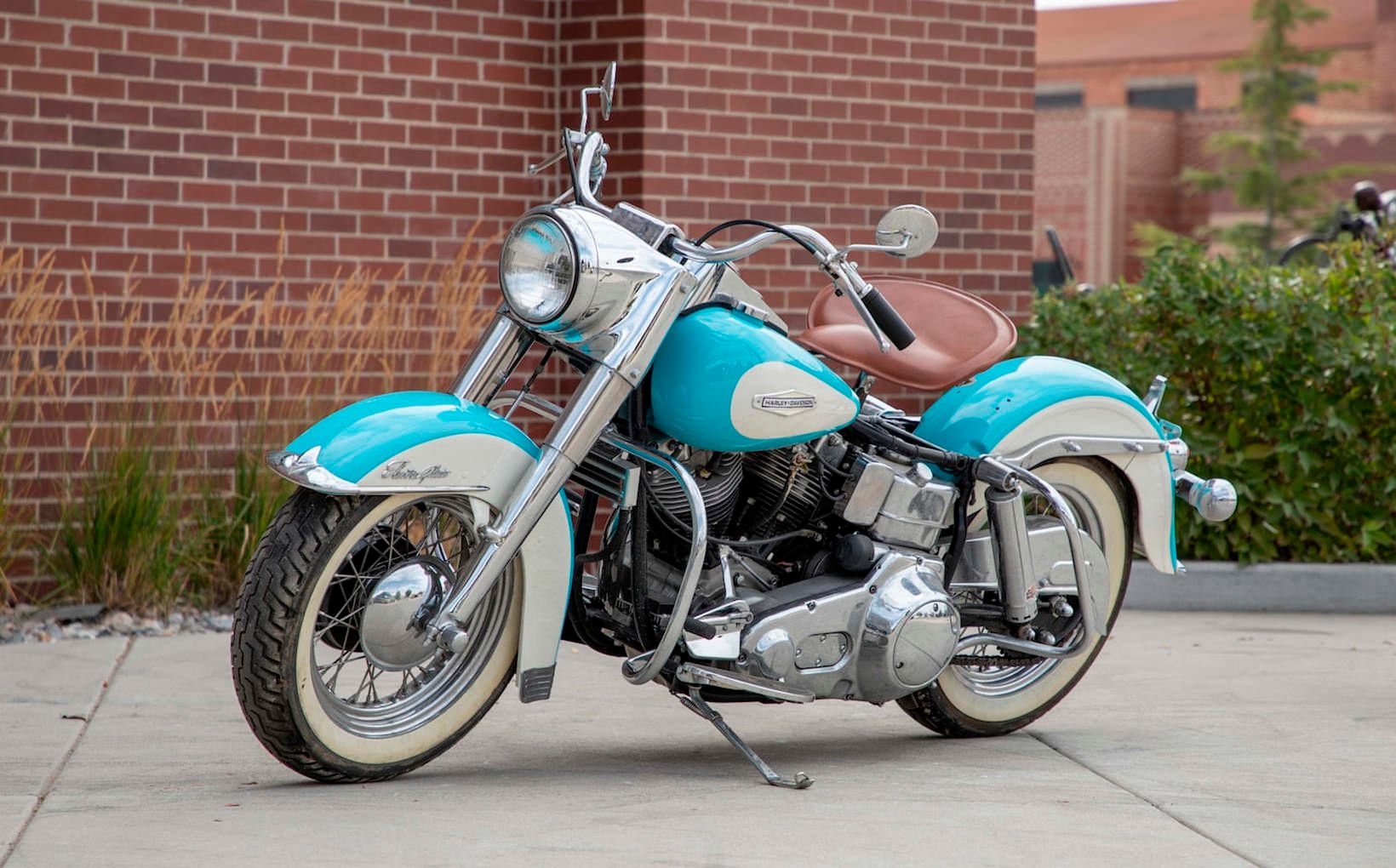 With its major rival Indian having produced its last motorcycle in 1953 (until being successfully revived in 1999), Harley-Davidson became the sole American manufacturer and was struggling. It seems reasonable to suggest that the enormous prominence given to the brand by Easy Rider was a key factor in the iconic American brand’s survival. And while the Electra Glide did not have the care-free larrikin speedster quality of the Easy Rider Chopper, it certainly was ideal for tackling immense US distances. It went into production for the 1965 season and is still available 57 years later!

The Electra Glide retained the FLH model designation introduced by Harley-Davidson in 1949 when the company fitted its first hydraulic front forks. The 1949 machine was called the Hydra Glide. Elvis Presley owned a 1957 FLH, the last year of the model.

Then in 1958 the FLH was renamed Duo Glide and boasted the addition of rear brakes and hydraulic rear suspension. The Duo Glide got a sprung seat and the rear suspension had three settings – solo, heavy and tandem.

The Electra Glide was essentially named for its electric starter. Kick-starting the heavyweight H-D V-twin had been hard work and this change was much appreciated, although there was no way H-D customers would have countenanced any smoothing-out of the engines inherent harshness and vibration! Never a manufacturer to depart too far from the tried-and-true, Harley equipped the Electra Glide with a kick-starter as back-up, while the four-speed gearbox could be changed by hand or foot – an arrangement that lasted for decades. A 12-volt electrical system replaced the traditional six-volt arrangement and the frame required modification to accommodate the bulkier battery. Hard lockable saddlebags and lace-spoke wheels shod with whitewalls were characterful elements. A five-gallon ‘Turnpike’ fuel tank was fitted and the instruments were streamlined into it.

This was the last Harley model to use the famous ‘Pan Head’ engine.

With a compression ratio of 8:1, the air-cooled four-stroke 1207cc V-twin engine produced 60 brake horsepower at a leisurely 5200rpm.

Top speed was 100 miles per hour and in 1965 this was still considered a creditable achievement. But four years later in the new era of motorcycling ushered in by Honda’s 750 Four, expectations began to change swiftly. 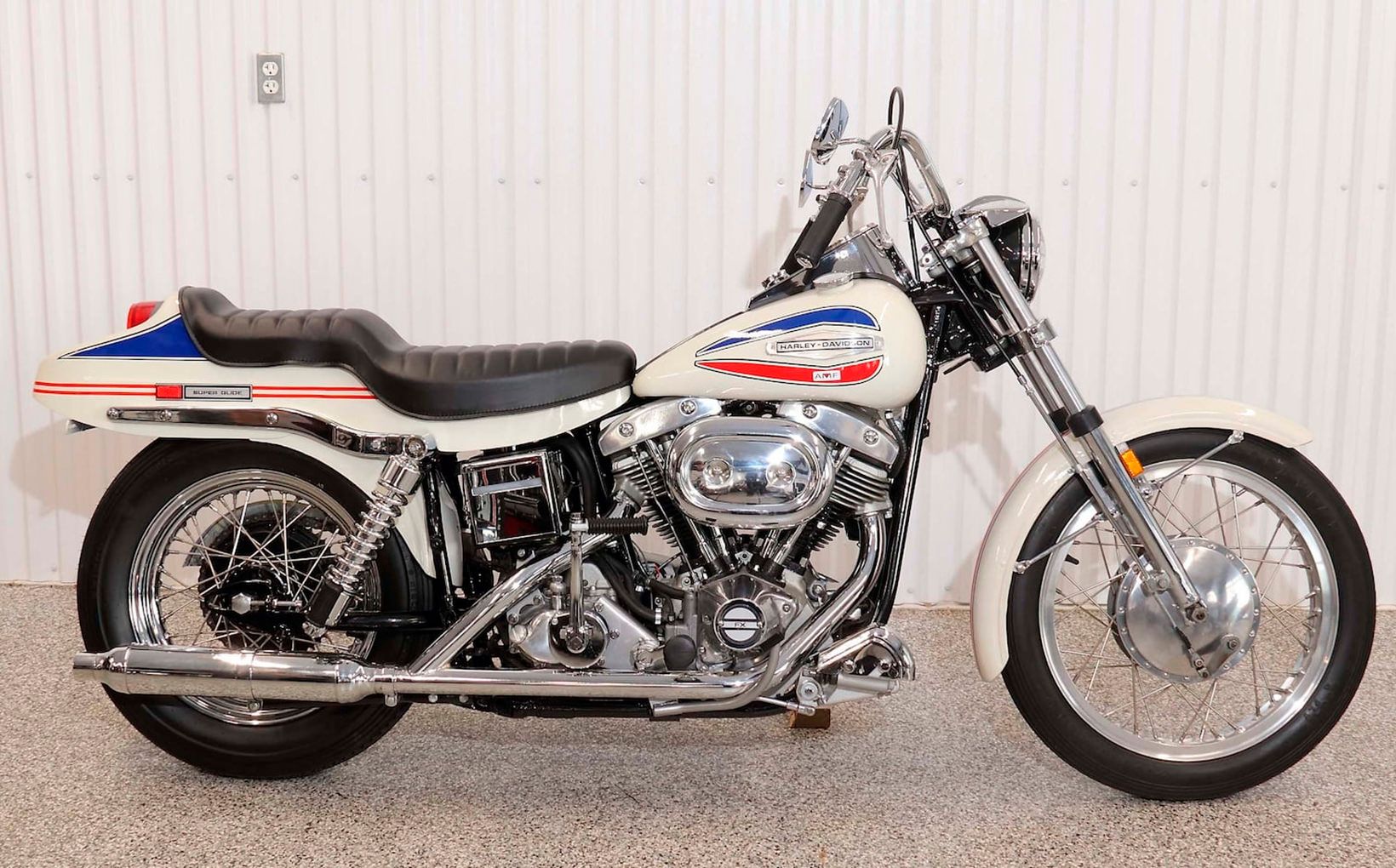 In 1966 H-D replaced its long-serving Pan Head engine with the Shovel Head (because the rocker covers resembled an upturned shovel!).

The 1969 Electra Glide is among the most celebrated of the long series, characterised by the new removable front-mounted ‘batwing’ fairing.

For 1970 the front and rear drum brakes were replaced by discs, doubtless a most timely move!

In 1971 Harley-Davidson introduced a new niche model partly inspired by the Easy Rider Chopper and the independent chopper customisers of the day. This was the FX Super Glide Night Train. It was created by William (‘Willie G’) G. Davidson, H-D design boss and grandson of one of the co-founders. The Super Glide was the first factory custom motorcycle. Willie G started with an FLH frame. By raiding the Sportster options bins, he was able to dress this frame with a fibreglass seat, tapering rear fender, Sportster front fork and oversized and smaller headlight. The Super Glide Night Train was offered in vibrant colour schemes, most notably a red, white and blue combo known as Sparkling America: it was the distilled essence of the brand. Sales were never especially high but the Night Train drew many prospective new customers to Harley showrooms, more than a few of whom signed up instead for an Electra Glide. 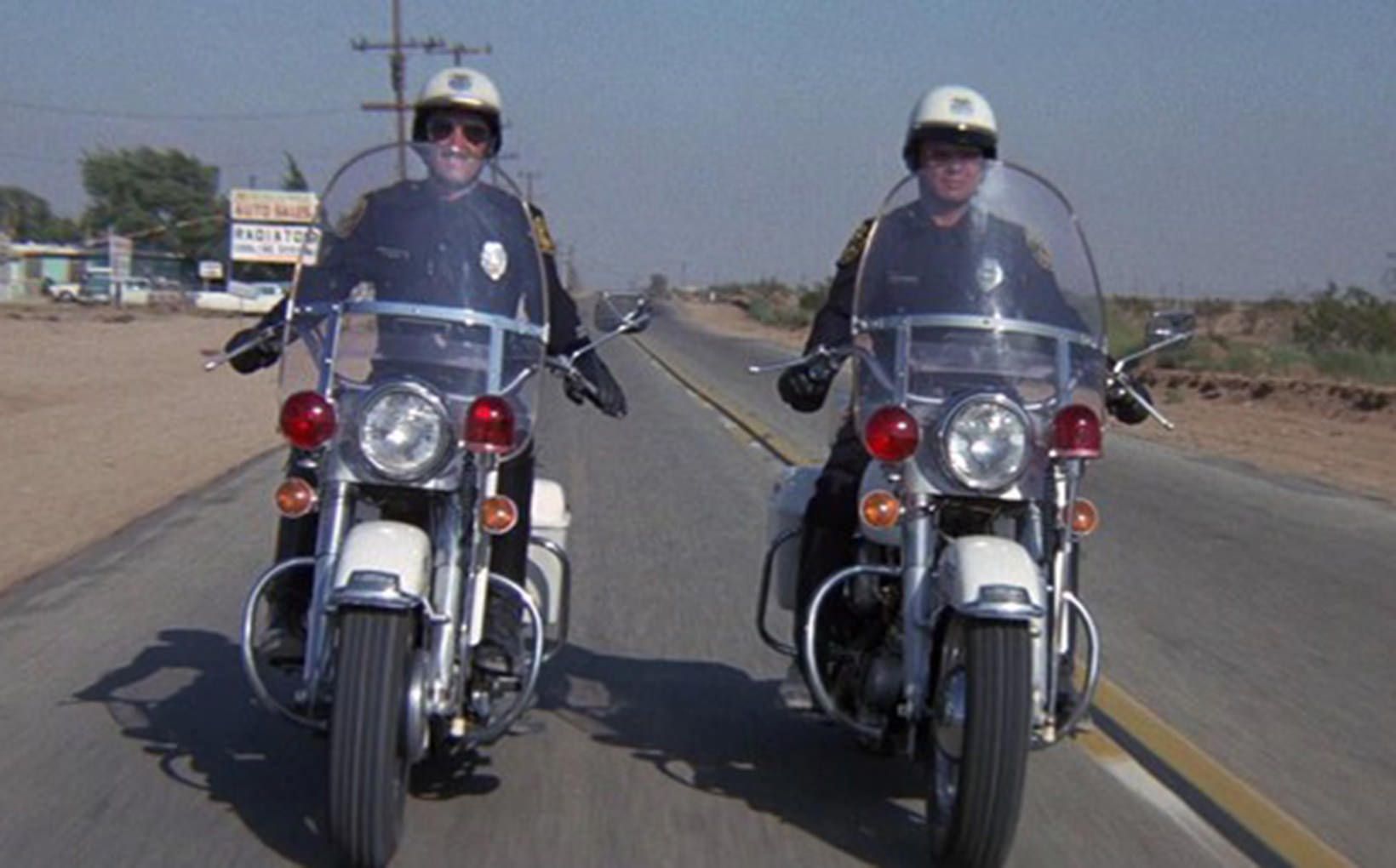 The 1973 movie Electra Glide in Blue was another Harley celebration.

In 1973 The Electra Glide received dual front disc brakes. This was the year in which the celebrated H-D flagship played a starring role in its own (eponymous) movie, Electra Glide in Blue (1973), named for the motorcycles used by US police. 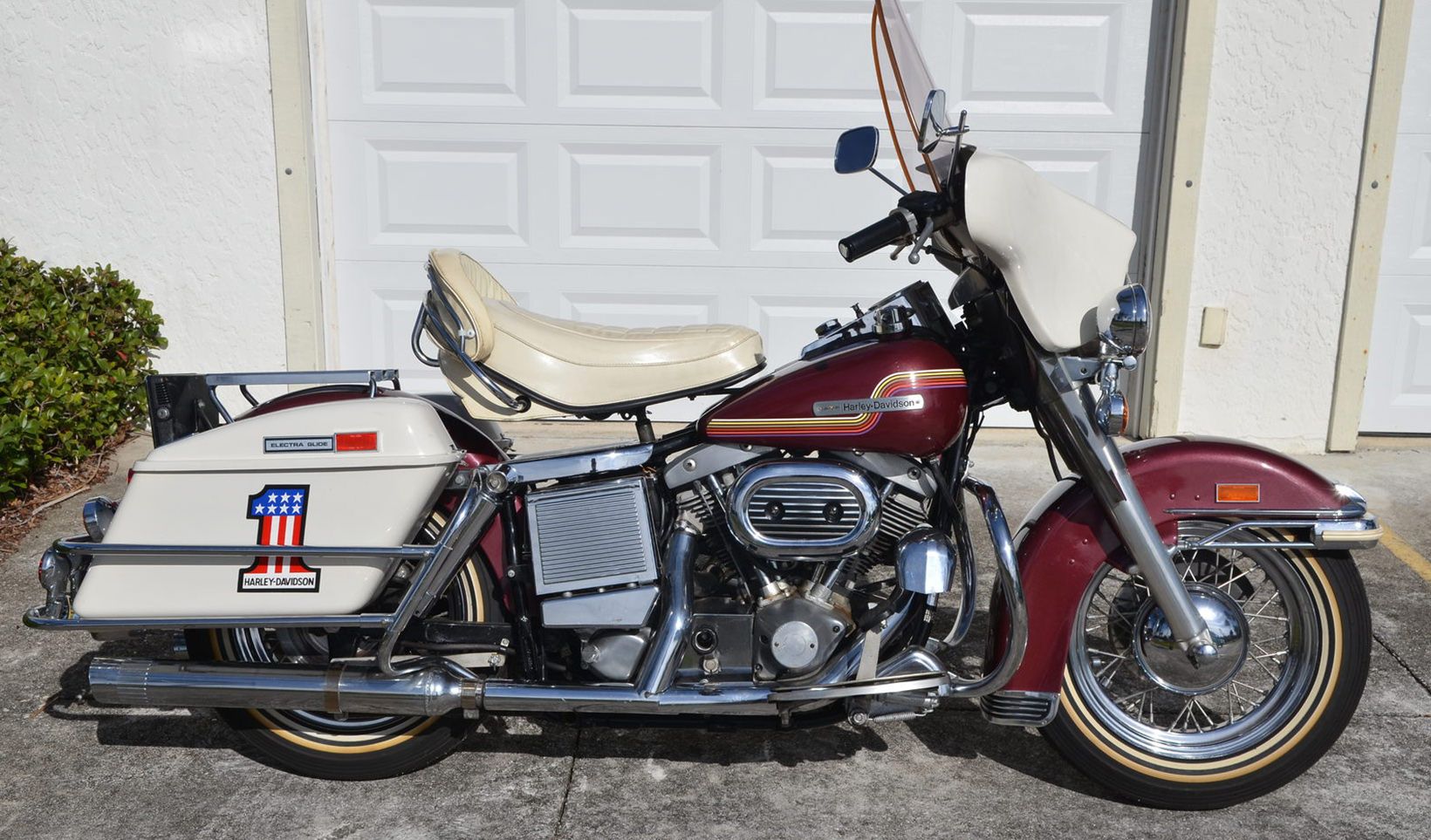 By 1975, the Electra Glide had dual front disc brakes but still made do with a four-speed gearbox.
(Image: Mecum Auctions)

In 1978 the V-twin received a 130cc increase in capacity to 1337cc. Equally welcome was an extra ratio in the gearbox. A new dual-seat was fitted.

Over the coming years, many more changes took place. Electronic fuel injection replaced the carburettor (variously Keihin, Mikuni, etc) in 1997. Two years later the engine was given a capacity increase to 1449cc (67bhp), then to 1584 in 2006 when the five-speed gearbox made way for a six-speed unit.

There have been numerous special editions and one of the standouts among these is the 1988 Classic 85th Anniversary. 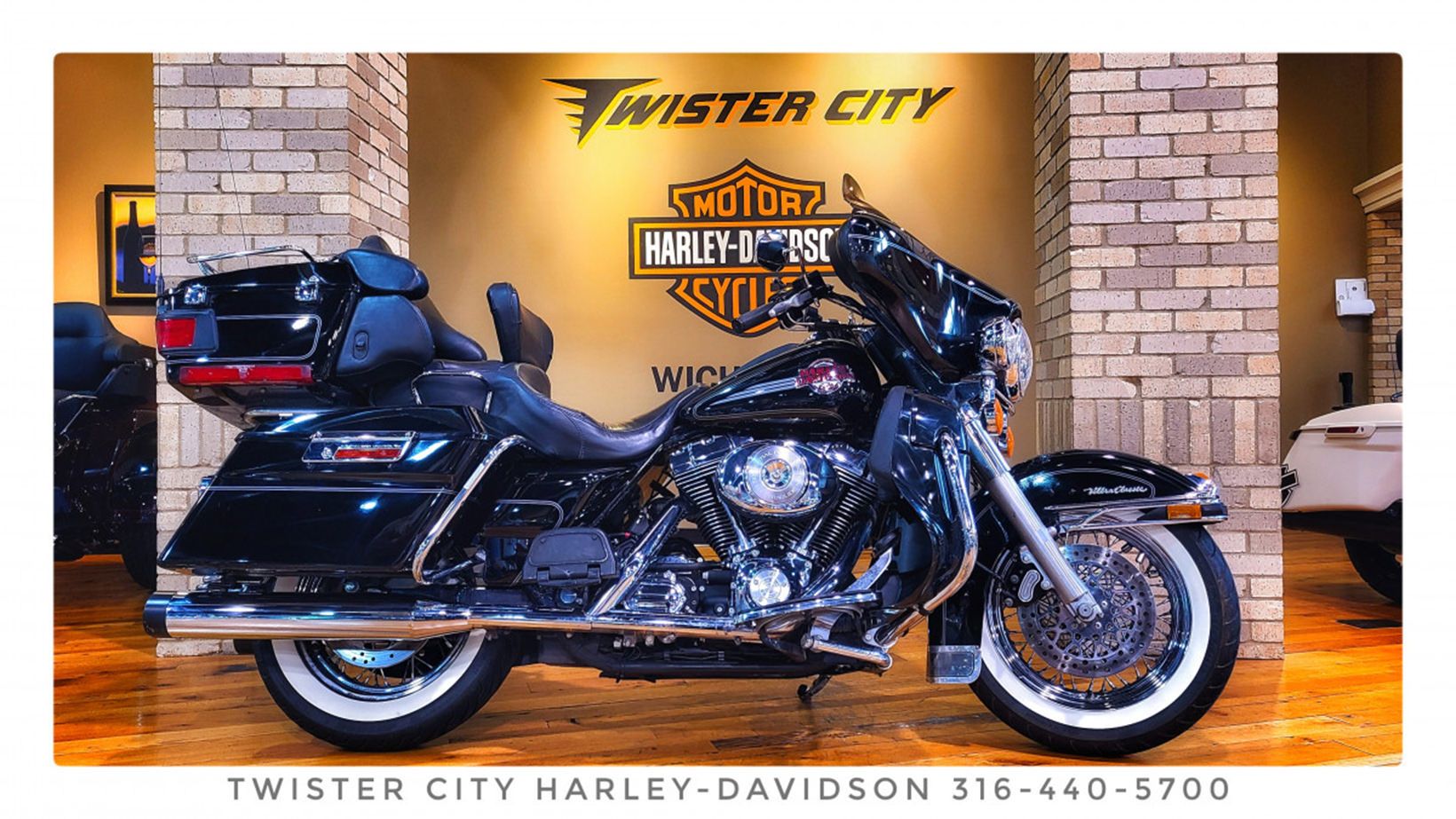 2005 Electra Glide looks ready for a cross-continental holiday, but wouldn’t you be anxious not to get it dirty?
(Image: Twister City Harley Davidson)

The Electra Glide evolved slowly over the next two or more decades. Highlights included the 1979 Classic and the 1988 Classic 85th Anniversary.

There is probably no sound in motorcycling as recognisable as the distinctive note of a Harley-Davidson V-Twin. Harley-Davidson’s research showed that its buyers prioritised styling and reliability over high performance. No wonder, that when the Japanese motorcycle manufacturers began to build cruiser-style machines, they emulated the Electro Glide for choice of engine (V-twin, of course!) and style. For many purists though, there can be no substitute for a Harley! 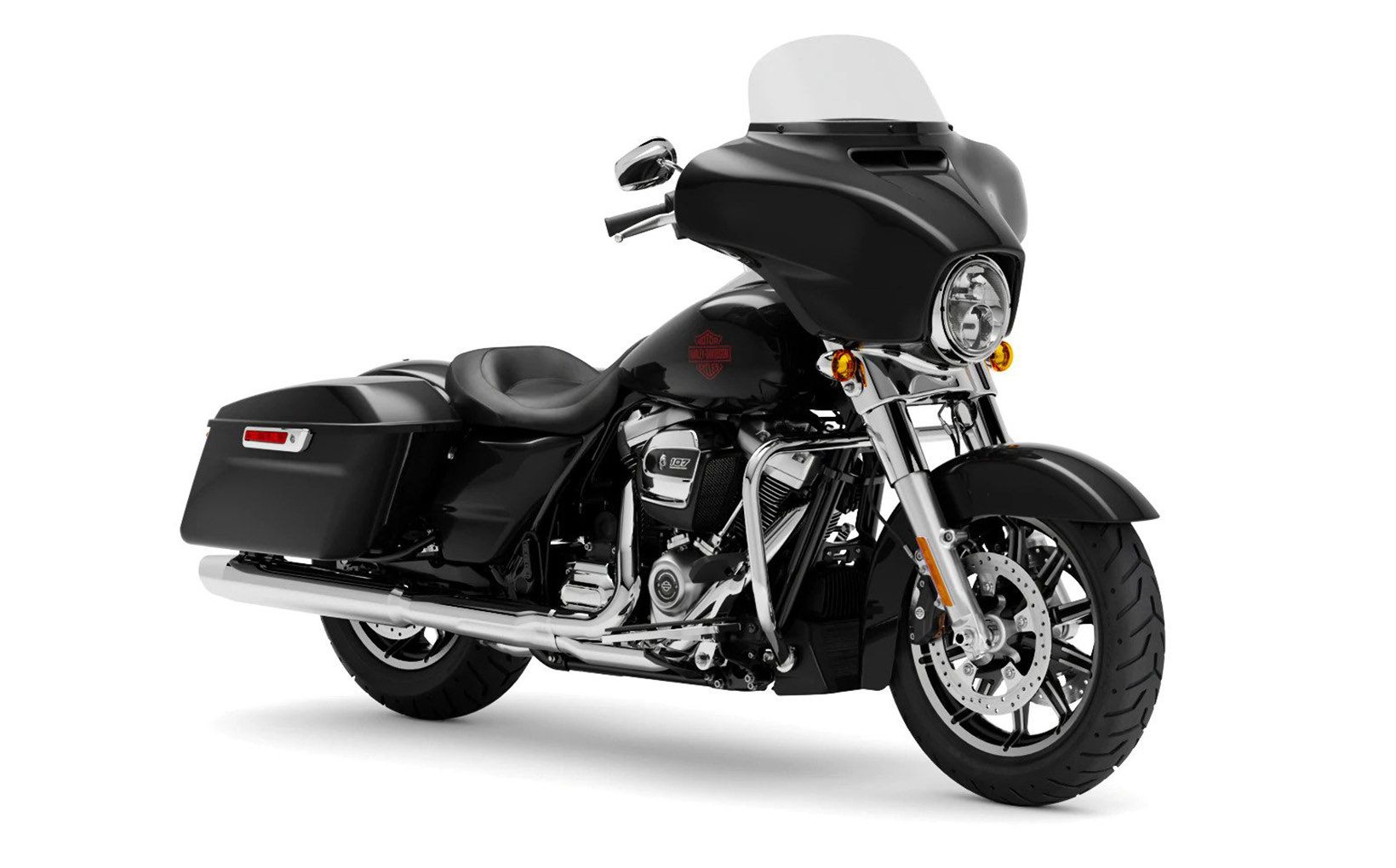