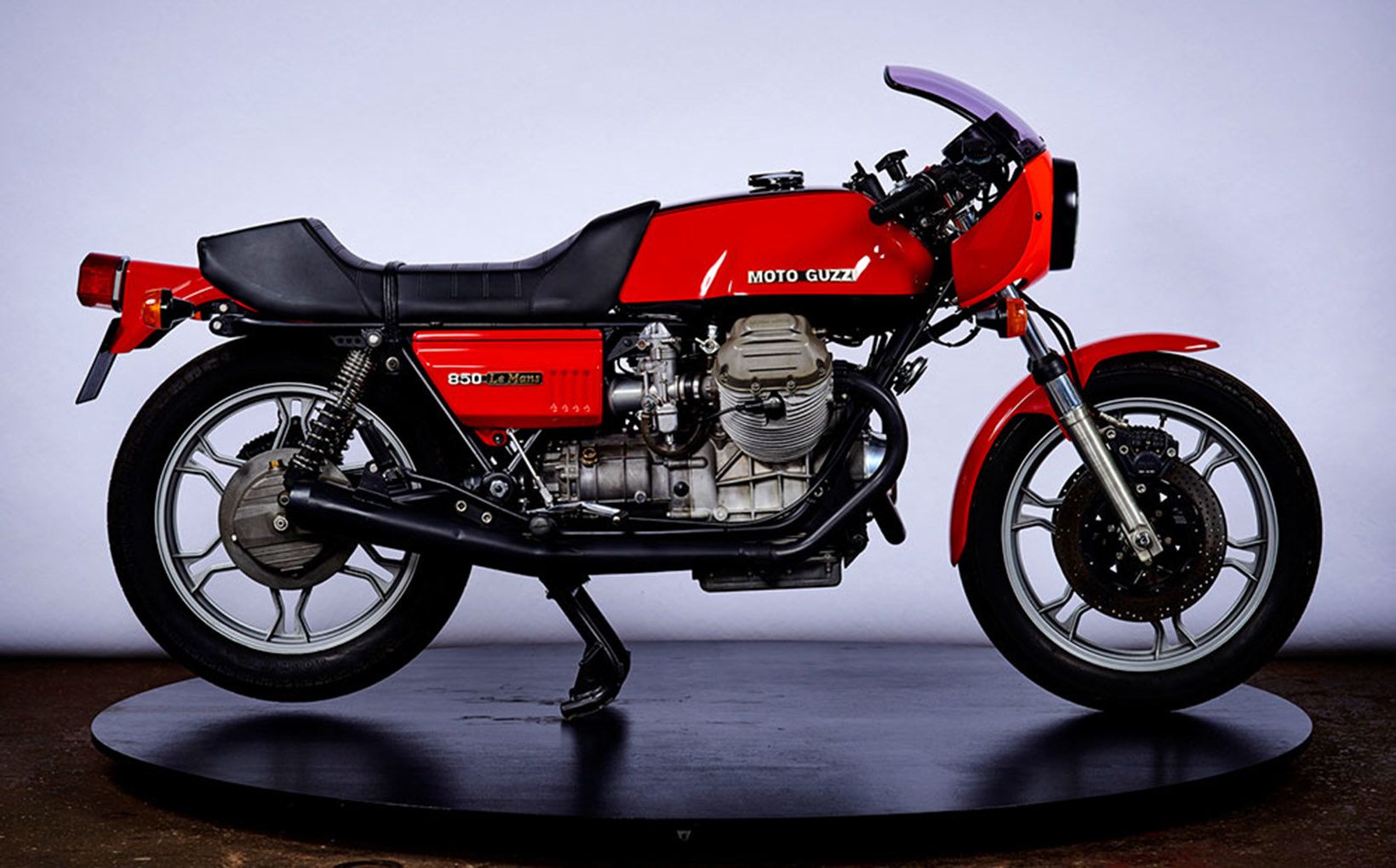 In 2021 Moto Guzzi celebrates its centenary and for most of these 10 decades the famed Italian manufacturer has been at or near the forefront of European motorcycle technology. Among the most significant of its bikes is the Le Mans, which was essentially a roadgoing edition of a 1971 racer.

Guzzi engineer Lino Tonti created a special machine with an 844cc 90-degree V-twin for the 1971 Bol d’Or Le Mans 24-hour race, which it led for 10 hours until slowed by a broken rocker. Tonti prepared a race version but Moto Guzzi owner Alejandro De Tomaso had another pet project he wanted done first, so the roadgoing Le Mans had to wait until the 1975 Milan motorcycle show; Moto Guzzi had its headquarters at Como, 51 km north of Italy’s fashion capital.

When the 850 Le Mans made its debut for model year 1976, it was categorised by some reviewers as a ‘flashbike’. In its December 1976 issue, Motorcyclist Illustrated said:

The Moto Guzzi 850 Le Mans is one of a handful of motorcycles referred to sometimes affectionately as ‘flashbikes’. To qualify for this terminology a motorcycle must be rare, expensive, European, quirky, handsome, high-performance and a bit of a technical or stylistic oddball. The qualifiers? Ducati 900 Desmo; MV Agusta 850-four; Laverda 1000 and 750; BMW R100RS; Benelli Sei; and the Moto Guzzi. There is no such thing as a Japanese flashbike; the Japanese manufacturers’ world is too real; and the quantities in which even the most technically spectacular offerings are produced nullify any hope for rareness or the required expense.

It seems that ‘flashbike’ was a coinage that failed the test of time: a quick Google question yields no answers! Much more durable is ‘café racer’ and this seems perfect for the Le Mans. 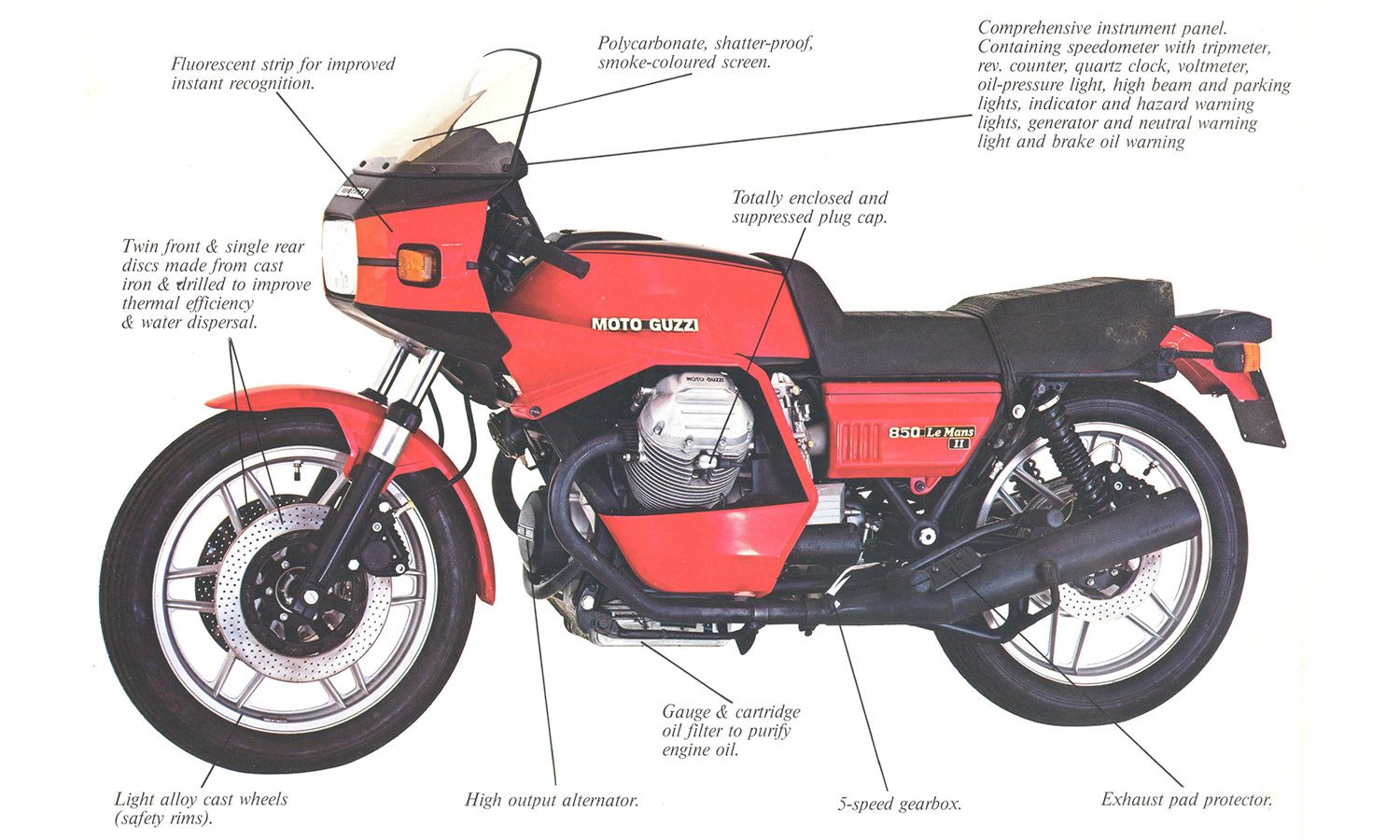 Moto Guzzi was keen to convey the practicality of its new Le Mans. Even side-on, it is easy to see how far the V-twin protruded laterally.
Image: Moto Guzzi

Café racer came into the motorcycling lexicon in London in the 1960s and was soon applied to four-wheeled machines as well. The café racer applied as much to the rider or driver as the machine. Significantly this evocative coinage reflected the major changes that came with the swinging sixties. In the era of postwar austerity in European countries such as Germany and Italy and even the UK, motorcycles were in a majority of cases a cheaper alternative to an entry level car – a three-wheeled BMW Isetta  or Heinkel, a Fiat 500, a Ford Popular. But heading into the new decade the rate of car ownership had risen significantly and as well as offering a more economical alternative to a cheap sedan, the motorcycle could also be an expression of leisure, desire, even rebellion – the perfect way to sprint from one street café to the next with your mates! Arguably, the Moto Guzzi 850 Le Mans was one of the first manufacturer interpretations of the café racer. 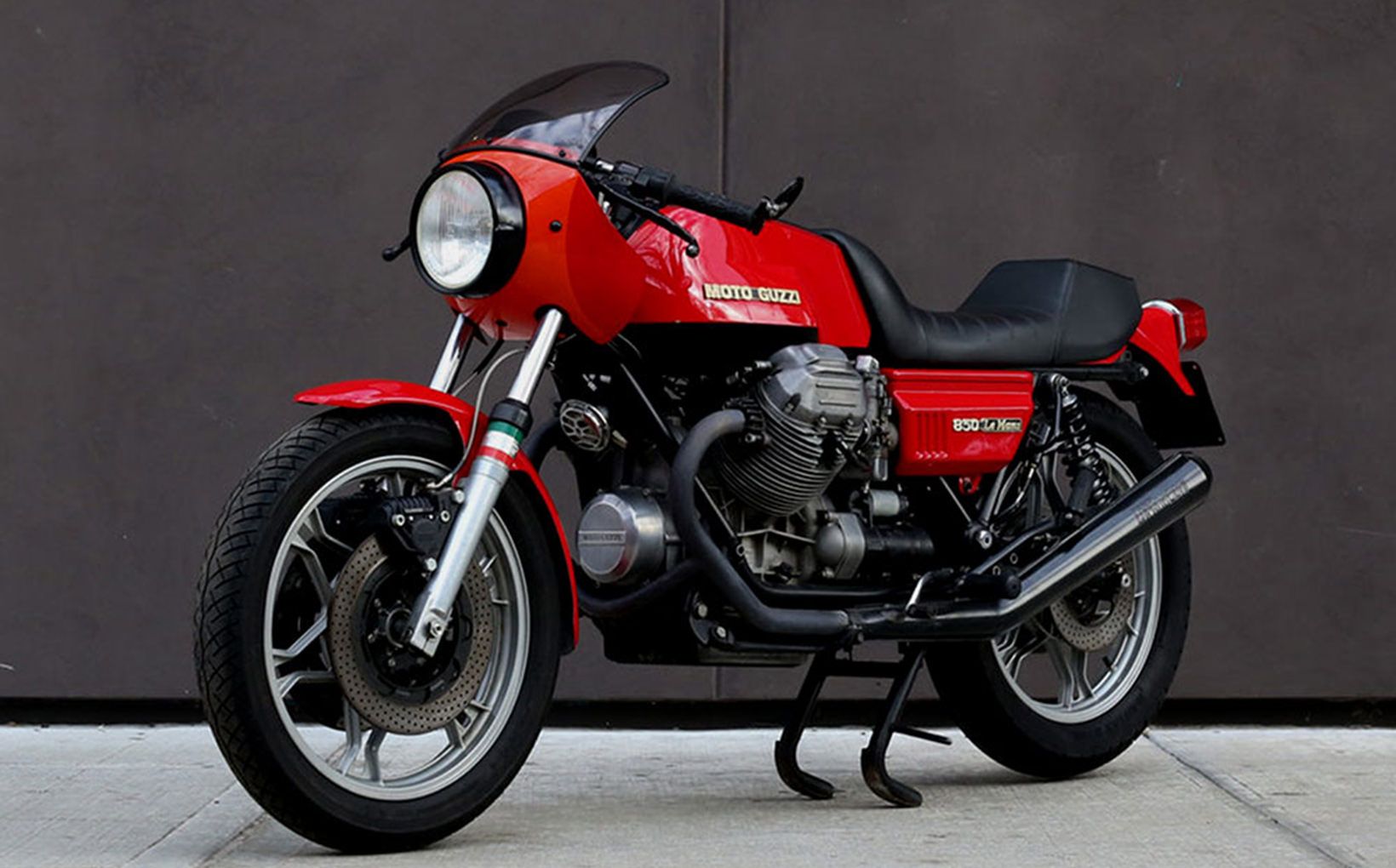 The late great American novelist and journalist Hunter S. Thompson (most celebrated for Fear and Loathing in Los Vegas) expressed this mood better than anyone. He was reviewing a Ducati 900SP for the March 1995 edition of Cycle World but it could just as easily have been the Guzzi Le Mans almost two decades earlier. He called his essay ‘Song of the Sausage Creature’.

‘Balls,’ I said. ‘Never mind the track. The track is for punks. We are Road People. We are Café Racers.’

The Café Racer is a different breed, and we have our own situations. Pure speed in sixth gear on a 5000-foot straightaway is one thing, but pure speed in third gear on a gravel-strewn downhill ess turn is quite another.

But we like it. A thoroughbred Café Racer will ride all night through a fog storm in freeway traffic to put himself into what somebody told him was the ugliest and tightest decreasing-radius turn since Genghis Khan invented the corkscrew.

Café Racing is mainly a matter of taste. It is an atavistic mentality, a peculiar mix of low style, high speed, pure dumbness, and overweening commitment to the Cafe Life and all its dangerous pleasures…I am a Café Racer myself, on some days – and many nights for that matter – and it is one of my finest addictions…

I am not without scars on my brain and body, but I can live with them. I still feel a shudder in my spine every time I see a picture of a Vincent Black Shadow, or when I walk into a public-restroom and hear crippled men whispering about the terrifying Kawasaki Triple… I have visions of compound femur-fractures and large black men in white hospital suits holding me down on a gurney while a nurse called ‘Bess’ sews the flaps of my scalp together with a stitching drill.

Ho ho. Thank God for these flashbacks. The brain is such a wonderful instrument (until God sinks his teeth into it). Some people hear Tiny Tim singing when they go under, and others hear the song of the Sausage Creature. 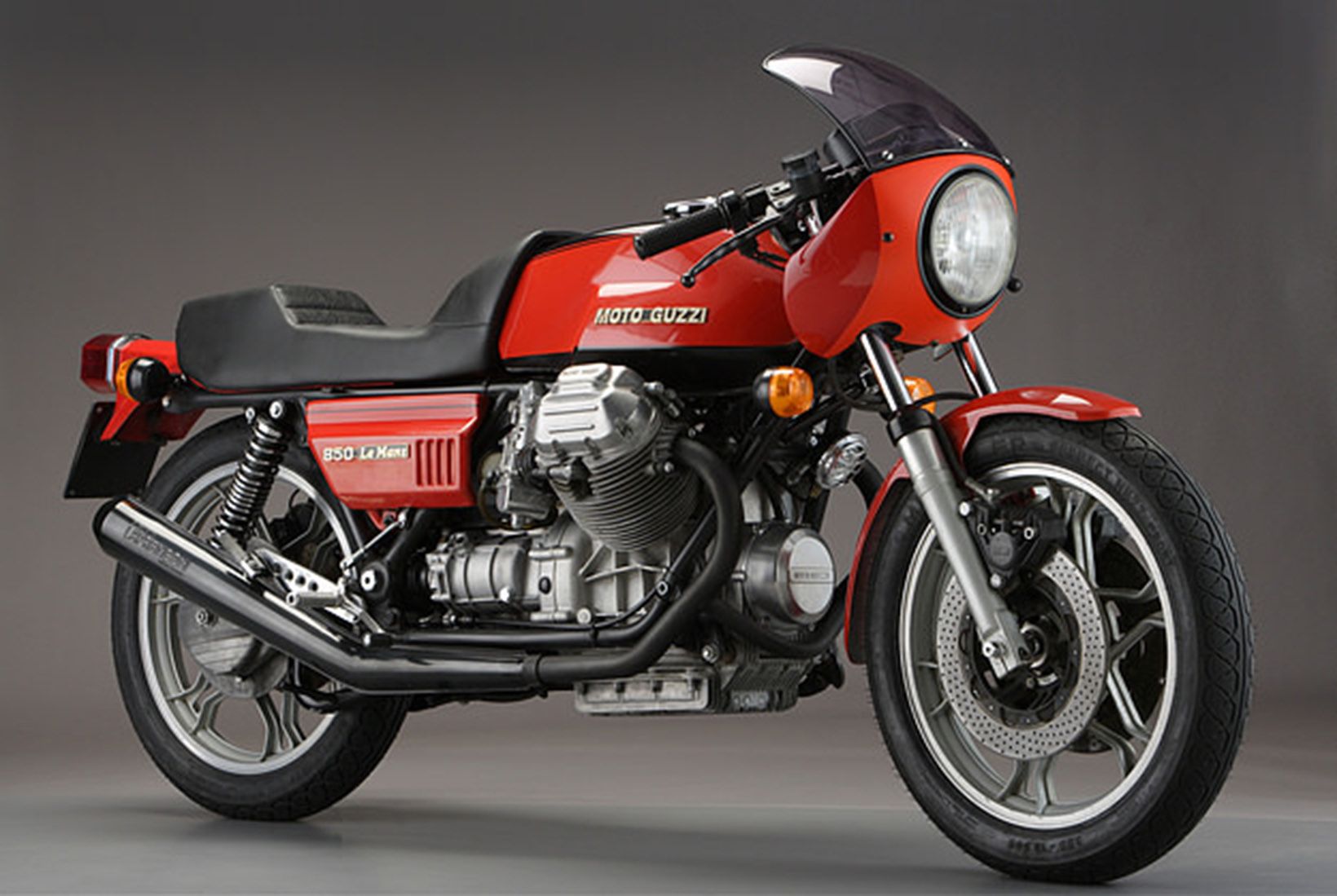 Sometimes the earliest examples are best and the original 850 Le Mans is the most collectible of the series which lasted from 1976 to 1993.
Image: bikeexif

Every contemporary road test of the new Le Mans contained one or two – sometimes more – negatives, but these were usually overwhelmed by virtues. The September 1977 issue of Cycle World concludes (after criticising the footrests, difficulty in finding neutral, and a cramped position for two-up riding):

But the very nature of these criticisms is so niggling as to warrant ignoring them. Moto Guzzi have a real prize fighter to wage battle against machines which are a lot more expensive. The Le Mans carries Italian flair for styling with a nonchalance found only in the Ducati Desmos and Laverda Jotas of this world. It looks like 130mph standing still and it’s undoubtedly the sort of bike many of us would part with hard earned cash for.

Beneath the smart cast alloy FPS wheels with WM3 rims were Brembo discs – twin 11.8s at the front and a single 9.5 behind. The stopping distance from 30 miles per hour (48km/h) was 28 feet, equal to most cars of the day. Interestingly, the front brake lever managed the right front caliper while the other had custody of the left and the rear. Blessedly, a pressure-limiting valve was fitted. Cycle World noted that this valve allocated 70 per cent of pressure rearwards and said: ‘In general, the longer we rode with the Guzzi’s braking system, the better we liked it.’ Some reviewers said it had the best brakes of any motorcycle in the world!

Braking, high-speed handling and performance were the undoubted strengths of the Le Mans. The suspension was essentially of racing specification. Engine highlights included a forged crankshaft, special pistons, fiercely aggressive valve timing and big valves manufactured of a superior grade of steel. 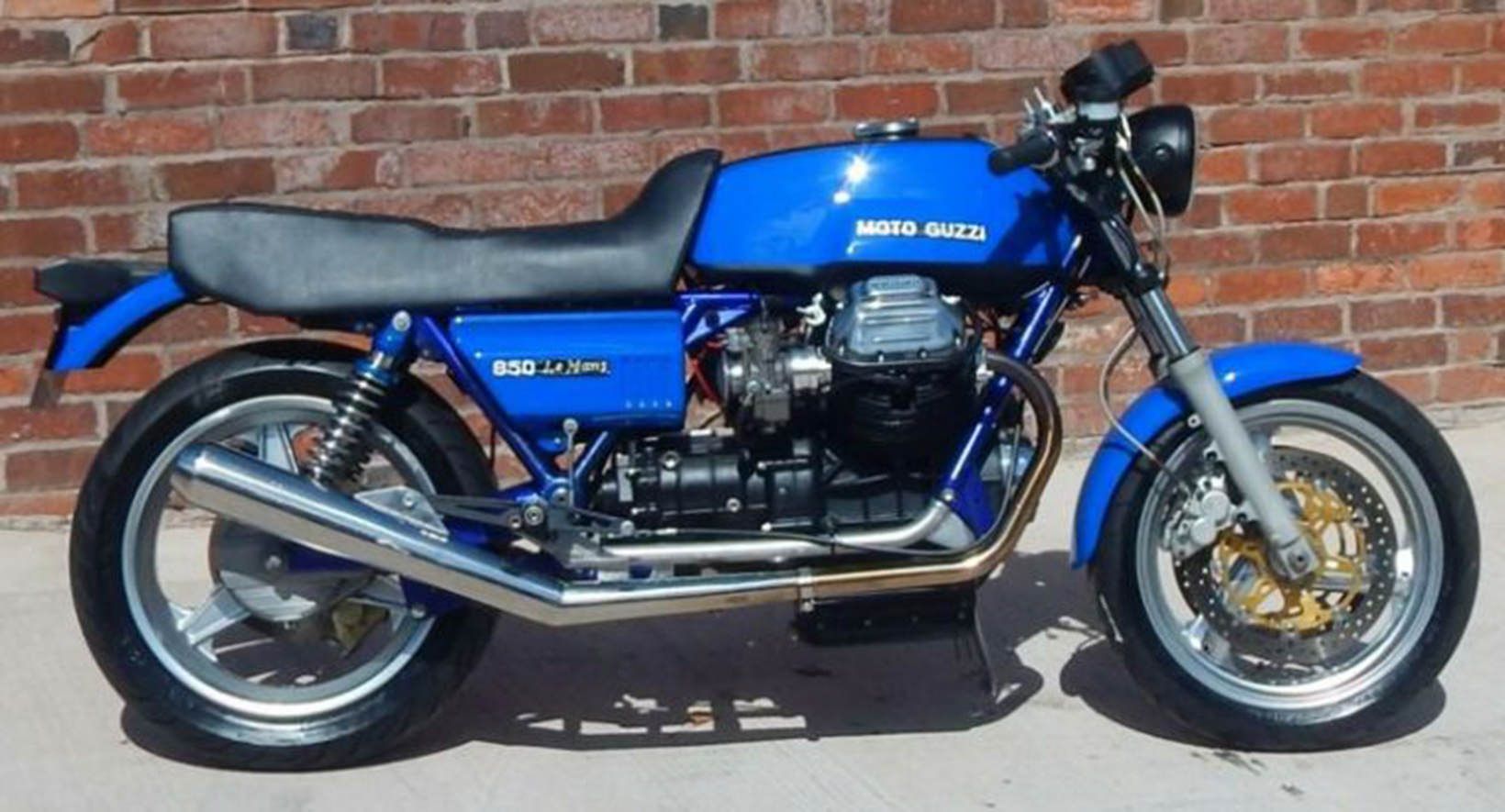 This Le Mans 850 Mark II in outstanding condition and with extensive modifications was available for sale at £8995 in June 2019.
Image: the custommotorcycle.com.uk

But in some respects, it was hardly a one-size-fits-all machine.

The rider sat very low on a seat just 30 inches above terra firma and clip-on handlebars, but the position was best suited to those shorter than five feet eight inches (173cm). Motorcyclist Illustrated did not mince its words:

Then there are the handlebars, of clip-on style, but much too flat, and too far forward, to promote anything but discomfort…

Finally there is that sporty little flyscreen. It’s a horror. Its aerodynamics are appalling, promoting shocking turbulence immediately behind it and thus dissuading you, and most certainly me, from getting down with my belly on that big, flat, and partially padded tank top. Finally, it removes that cushion of air on which all fast riding clip-on users must lean if they are to remain comfortable for long.

One of the most overt expressions of the café racer theme was the bikini front fairing which was pure racetrack and served to minimise lift at speed and, as one pundit observed, was just big enough to shield the ignition key from the wind!

From 1979, when Moto Guzzi released the Mark II, until its discontinuation in 1993, the Le Mans evolved steadily but without dramatic change. The major distinguishing feature of the Mark II was a new full frontal fairing, comprising two sections, the bottom one coming straight from the manufacturer’s flagship Spada. The top half was home to a rectangular halogen headlight. 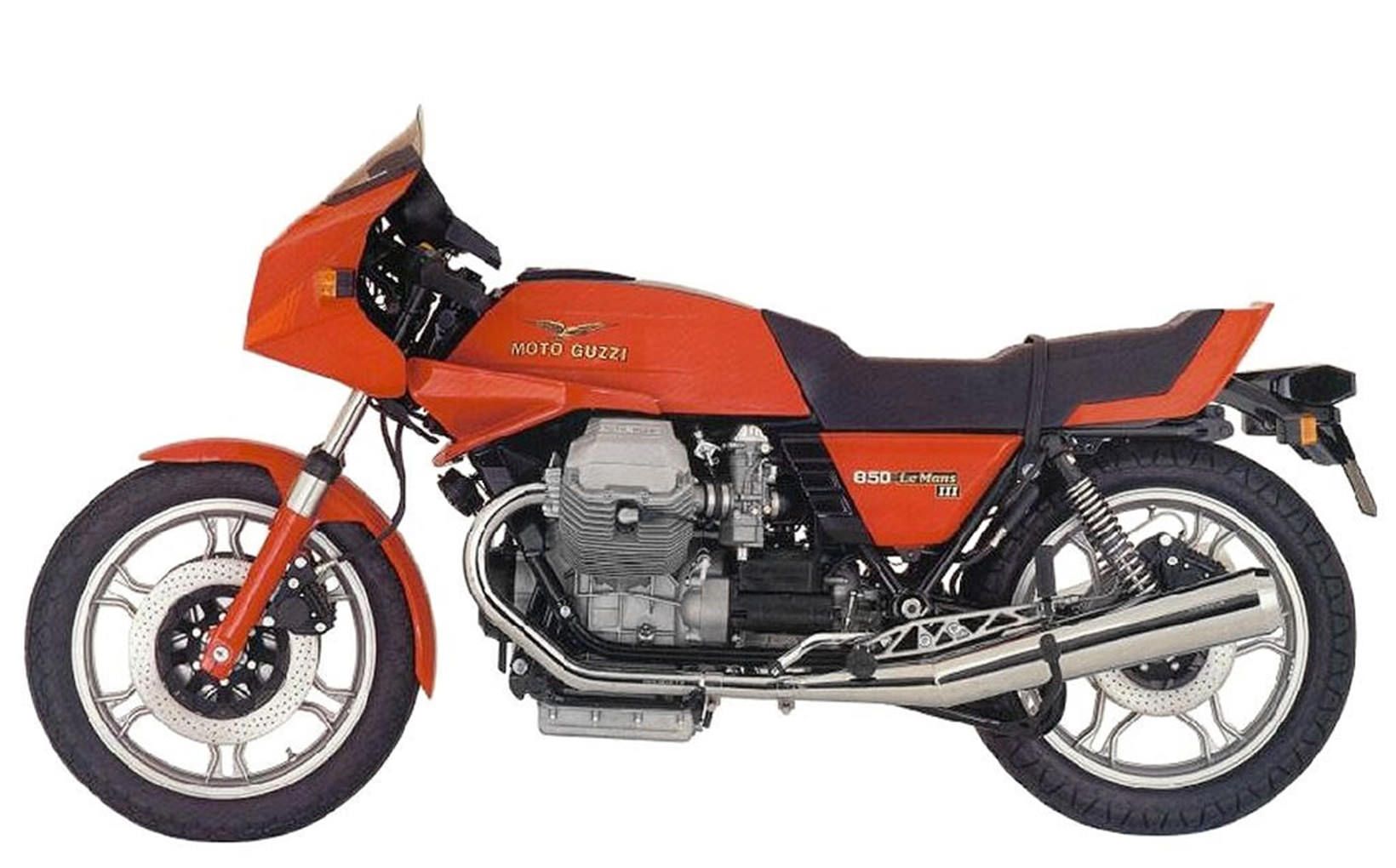 The most impressive new feature of the Mark III was a huge white-faced Veglia tachometer which John Perkins said in his test for the November 1981 issue of Which Bike? ‘would grace a Bugatti. It is a classically beautiful design which prompts the question, why aren’t they all like that?’ Nevertheless, Perkins criticised the instrument layout (and this was, of course, the third one!) for not being of the same style as the tacho.

A redesigned cylinder head with improved porting permitted the V-twin to approach 8000rpm. The bores were Nikasil-coated. The Mark III featured a smaller screen. There were air filters for the twin 36mm Dellorto carburettors and a fully chromed and quieter exhaust system (to meet US emissions regulations). 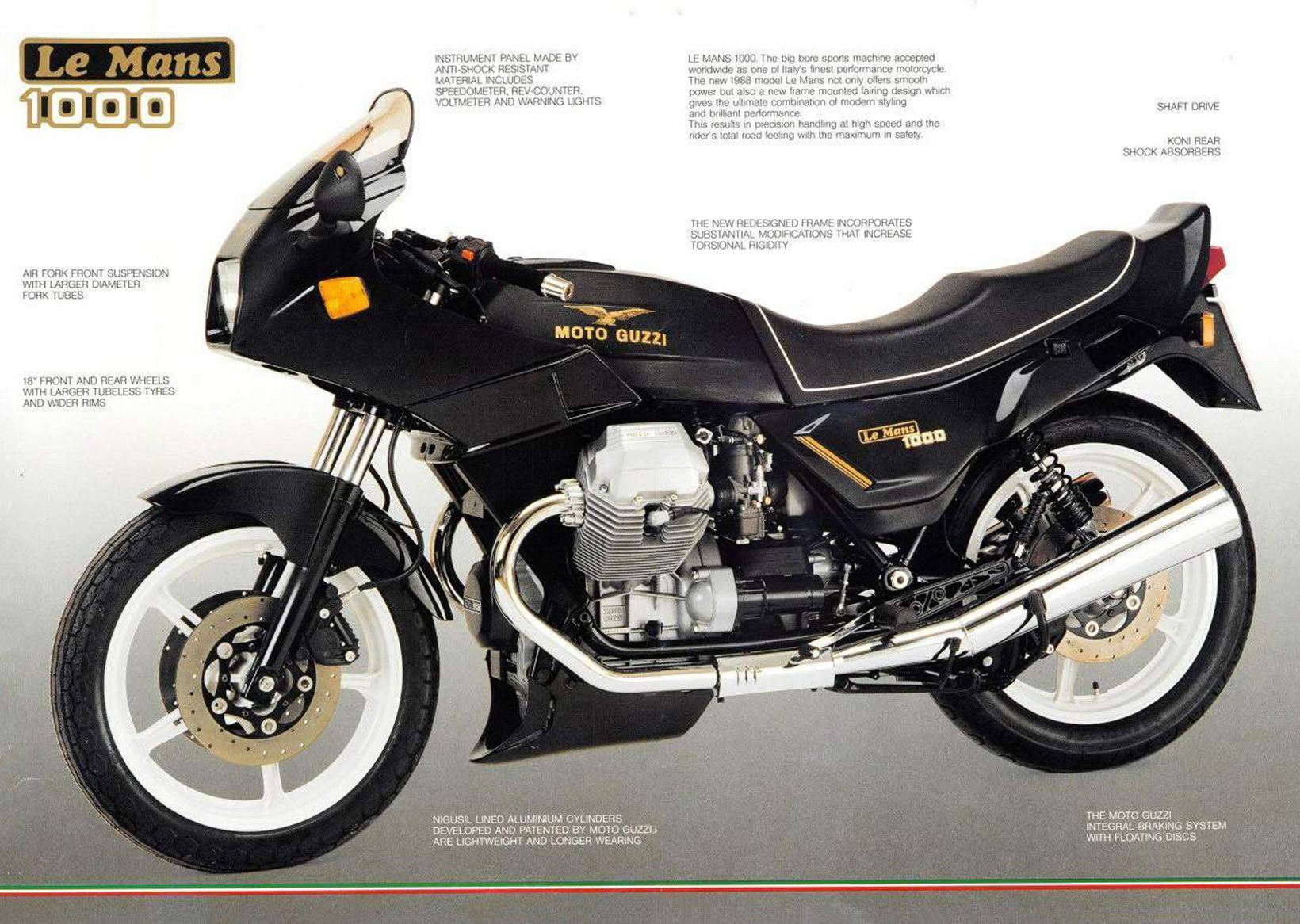 Under increasing pressure from the new breed of Japanese superbikes, Moto Guzzi modified the front end. A wider 2.5-inch front wheel of 16 inches diameter replaced the previous 18 X 2.15; rumour says De Tomaso himself insisted on the change! The rear wheel was still an 18 but up from 2.15 inches to an even three with a wider swing arm to suit. There were new Koni twin rear dampers with four settings for rebound and three spring pre-load positions.

Additional frame gusseting gave the Le Mans greater rigidity and the front fork was up in size from 35mm to 40.

But there was heavy criticism of the new front end with claims that the small-diameter front wheel – without accompanying modifications to the frame to allow for the changed suspension geometry – undermined the renowned high-speed stability of the earlier versions.

It was not until 1987 that Moto Guzzi tacitly acknowledged this mistake by offering an 18-inch wheel as an option. In 1988, the 16 disappeared altogether and the 18-inch front wheel became standard. A steering damper was added.

Tellingly, the Le Mans 1000 has been described as the bike that ‘became better and worse in roughly equal measure’. Weight and size were up, which effectively meant the extra power was needed to achieve the same performance as the original. 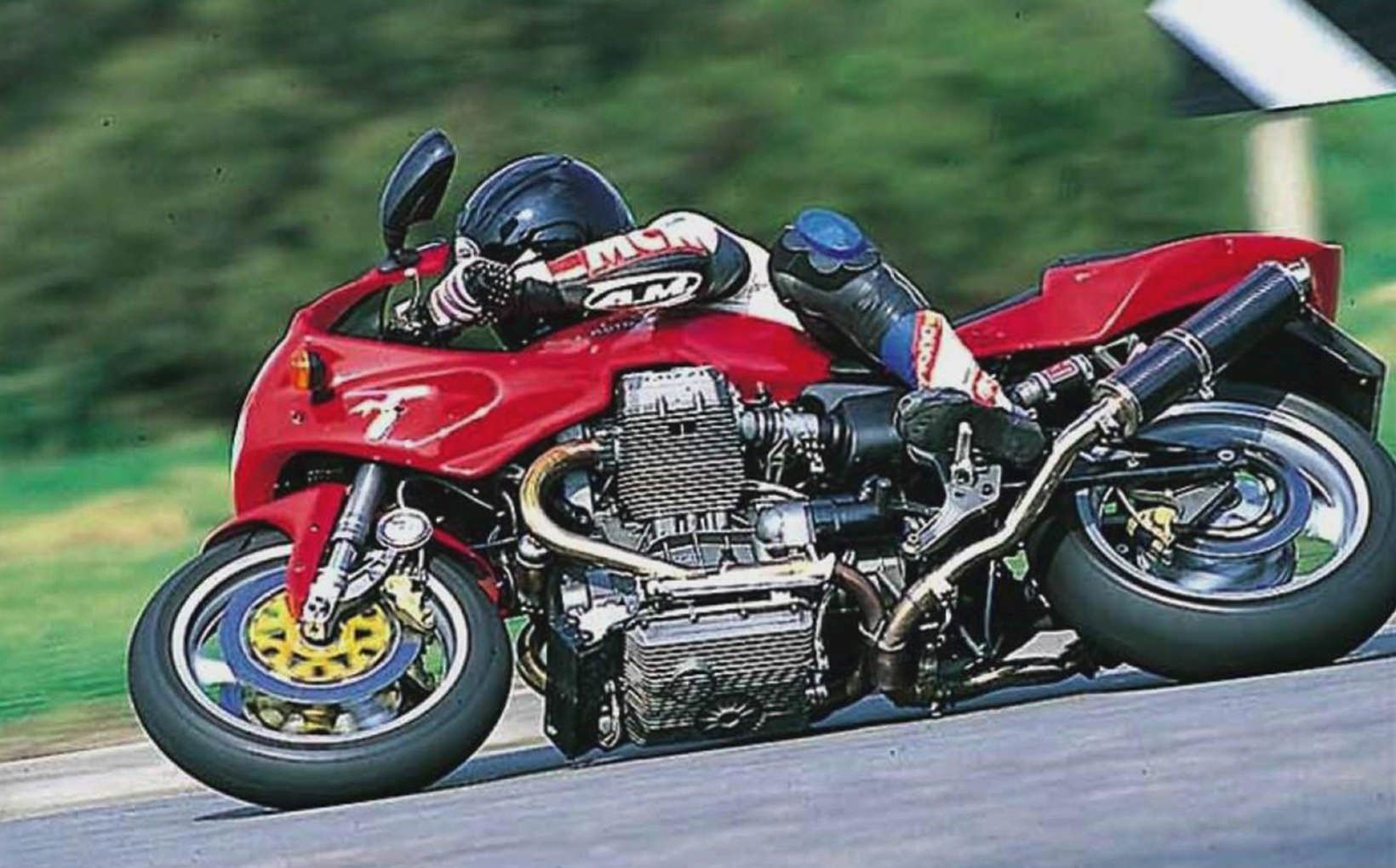 A Le Mans 1000 showcasing its sporting credentials to the max
Image: onlymotorbikes.com

The evolution of sports-oriented motorcycles from 1976 to 1993 was phenomenal. Japanese manufacturers built their new-gen machines in dizzying numbers. The British industry virtually collapsed; other non-Japanese makers suffered to varying degrees, although BMW fared better than many. Throughout this period, the Le Mans evolved in a relatively glacial fashion (remembering its design essentially dates back to 1971!) and with the passing years became more of an acquired taste. In its early years the Moto Guzzi Le Mans was lower and sleeker than most bikes but before the end of the 1980s, it was less state of the art and more of a middle-of-the-range sports tourer; victim to the new breed of Japanese superbikes. Devotees, however – purists shall we say? – would mostly not have had things differently and any Moto Guzzi Le Mans – and the earliest examples are probably the most desirable – exudes a unique café racer character.