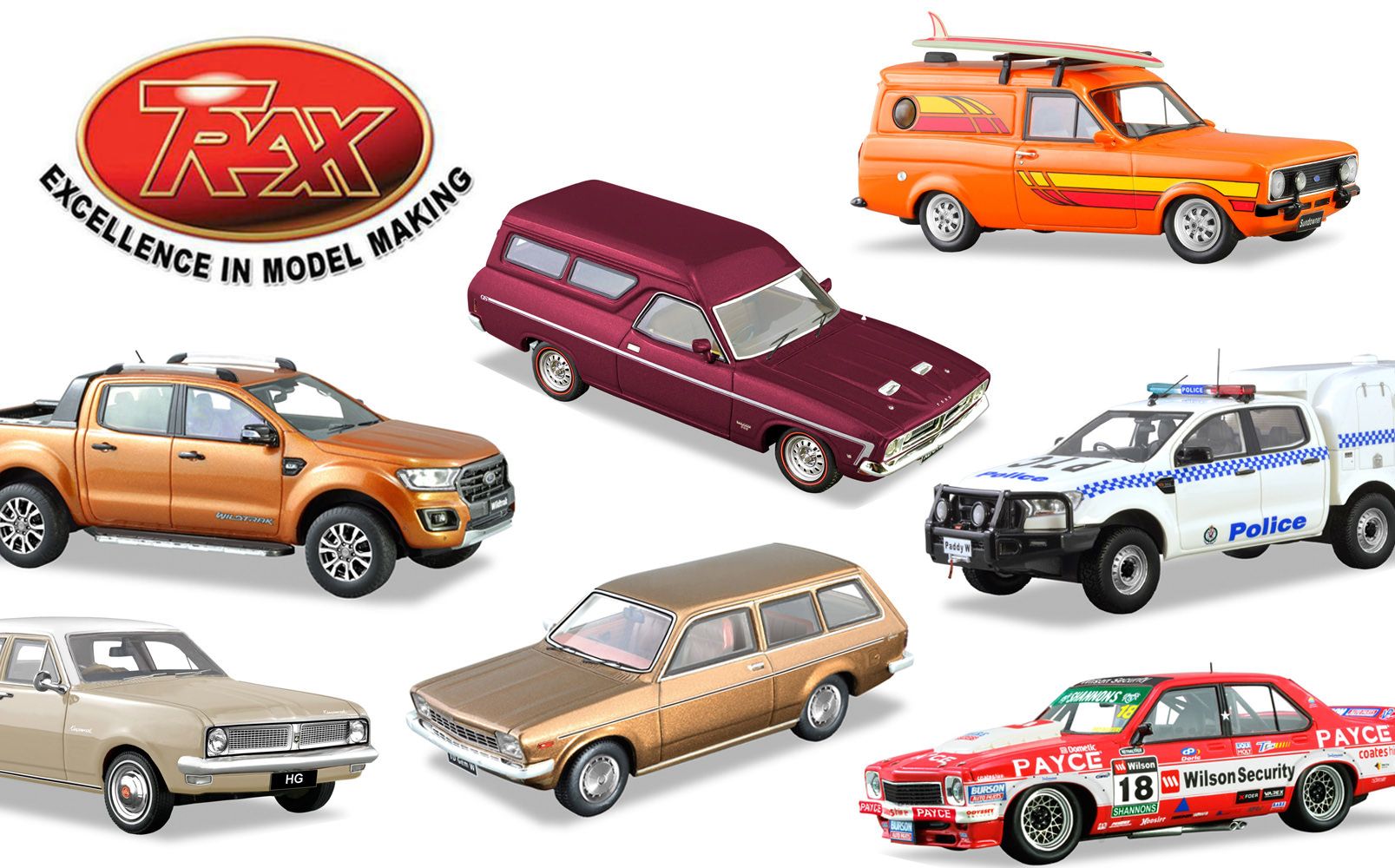 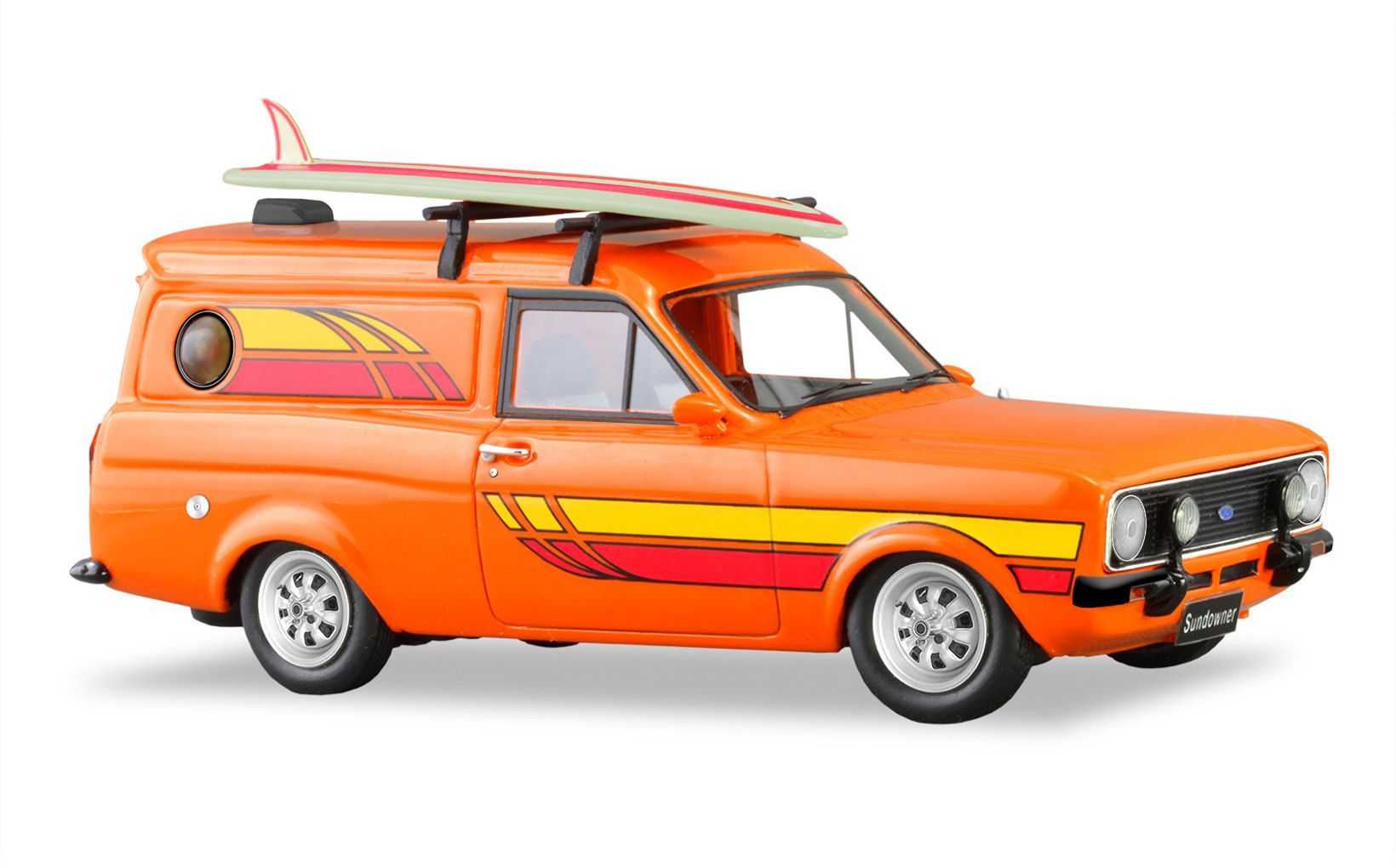 During the 1970’s the van craze was sweeping Australia. Unlike our American cousins, who were customising large, forward control type vans, the Australian panel van craze was typified by car based commercial derivatives. Ford had a strong presence in this segment (along with all of the Big 3), offering not only Falcon vans but also the small Escort. This 1/43rd scale replica really captures the era perfectly with bubble side windows, Sundowner decal package, driving lights and sports wheels. Finished in bright orange and complete with roof mounted surfboard, this excellent model will stand out in any collection. Limited stocks so grab yours today. 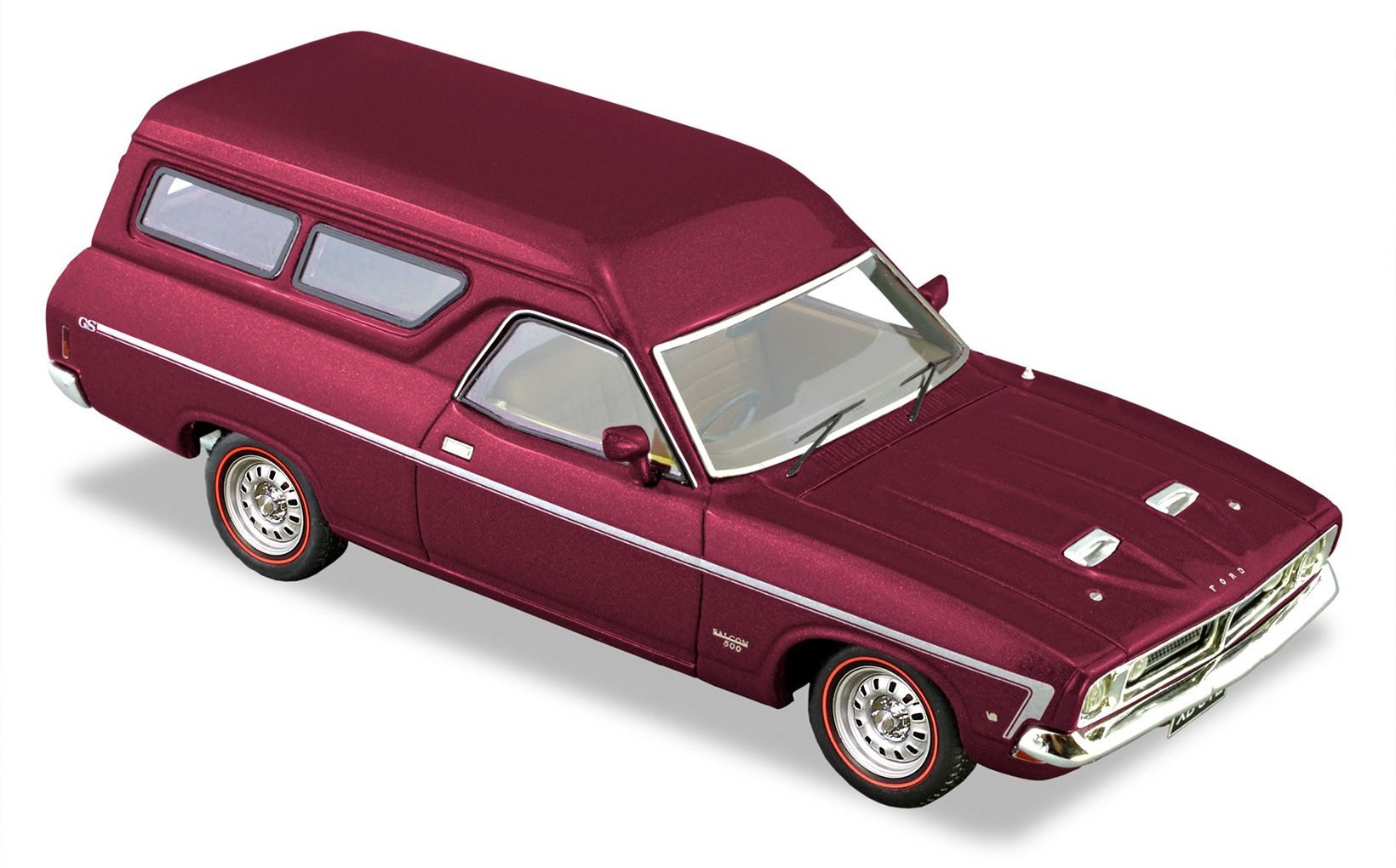 The panel van evolved in the 1970’s from a commercial only segment to more of a “lifestyle” positioning. Holden and Ford were the main players, with Chrysler coming to the party a little later. This XB GS model has been wonderfully replicated by Trax in 1/43rd scale, complete with GS striping package, rally wheels, bonnet scoops, driving lights and redline tyres. These vans were available with the 302 V8 or the mighty 351. Highly sought after today, these panel vans are few and far between. Make sure you add one (or two) to your model collection. Like the original, stocks are strictly limited, so get em while they last! 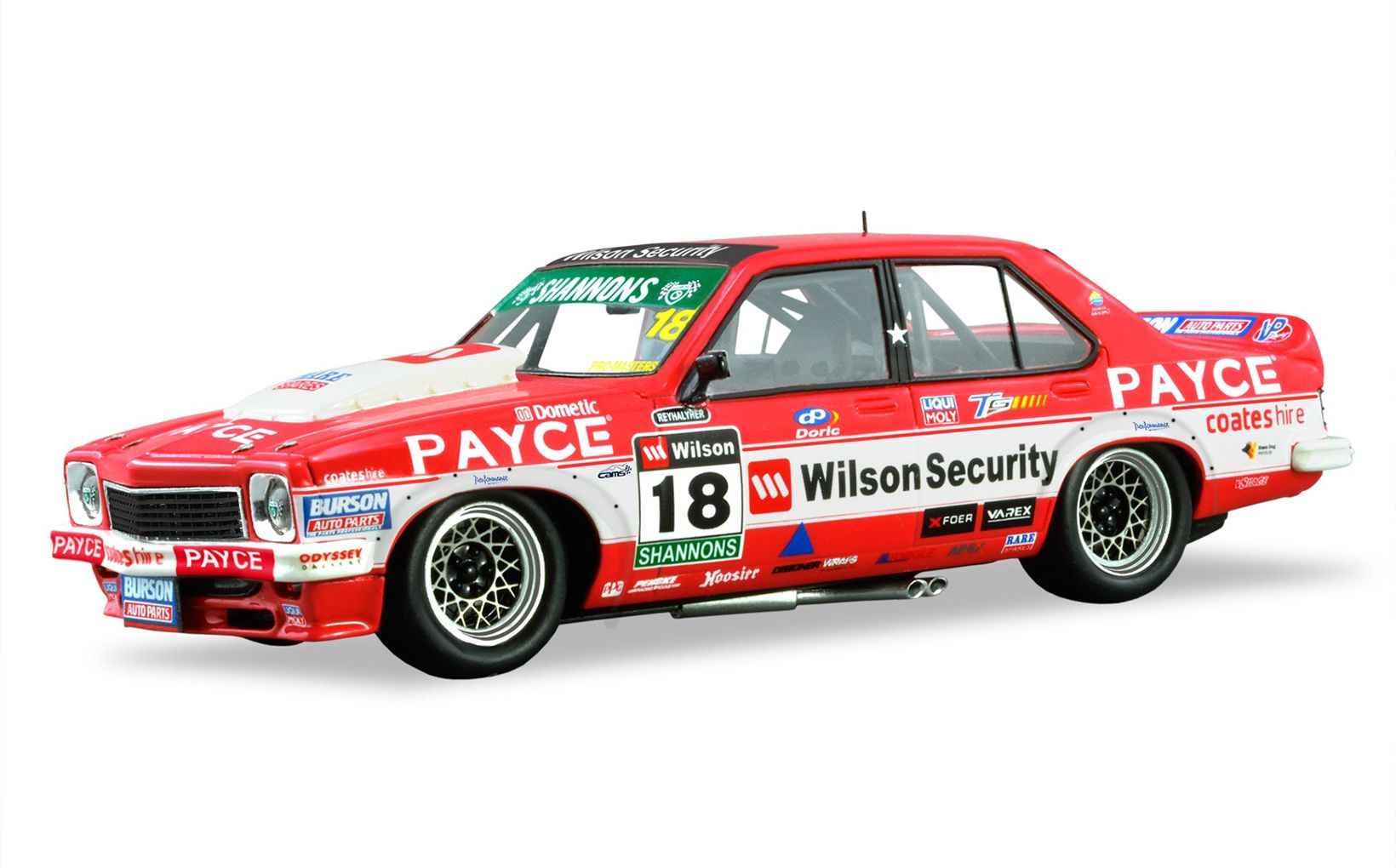 Legendary driver and Shannons Ambassador, John Bowe, has an illustrious racing history, including Bathurst wins. John is still very active today in historic touring cars and this 1/43rd scale replica by Trax faithfully captures his mighty Holden Torana A9X. The detail includes roll cage, communications aerial and exquisite racing wheels as well as excellent livery and sponsor decals. A 1/43 scale model of John Bowe is not included, however, you can communicate with the real person on the Shannons Club! Race to get your model today as they’re going fast. 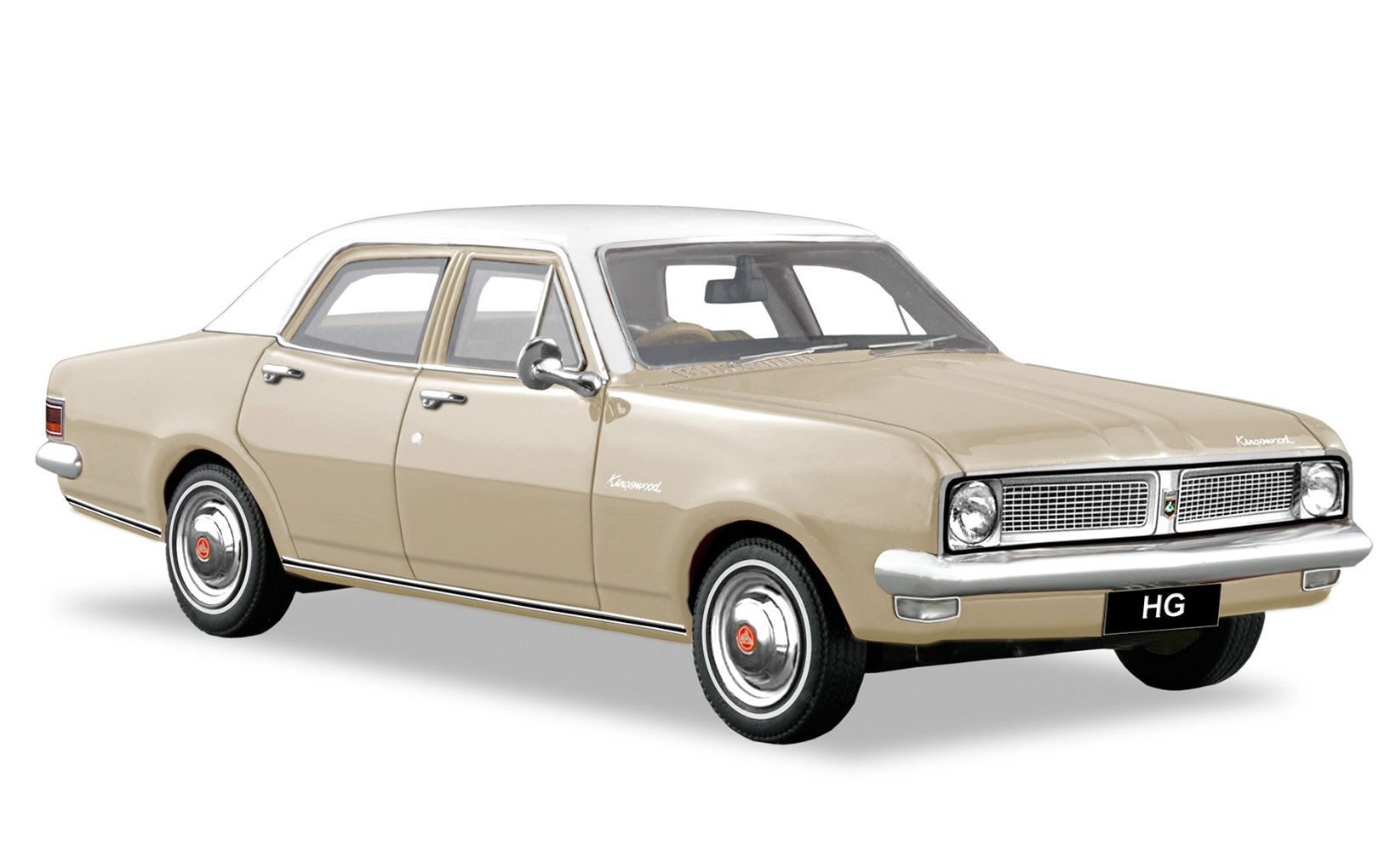 The Kingswood model was launched in the HK series and soon became a family staple in terms of transport right across the nation. This HG model in 1/43rd scale represents the last of the series, prior to the immensely popular HQ. Available in six cylinder form or a choice of 253 and 308 cubic inch V8s (a 350 V8 was available in the Monaro and Brougham), these big Holdens were a very popular choice - cementing the Lion’s domination of the car market for many years. Finished in period colours, including the popular white roof, which kept the car cooler in summer - before common place air conditioning. Order your piece of Aussie motoring history today! 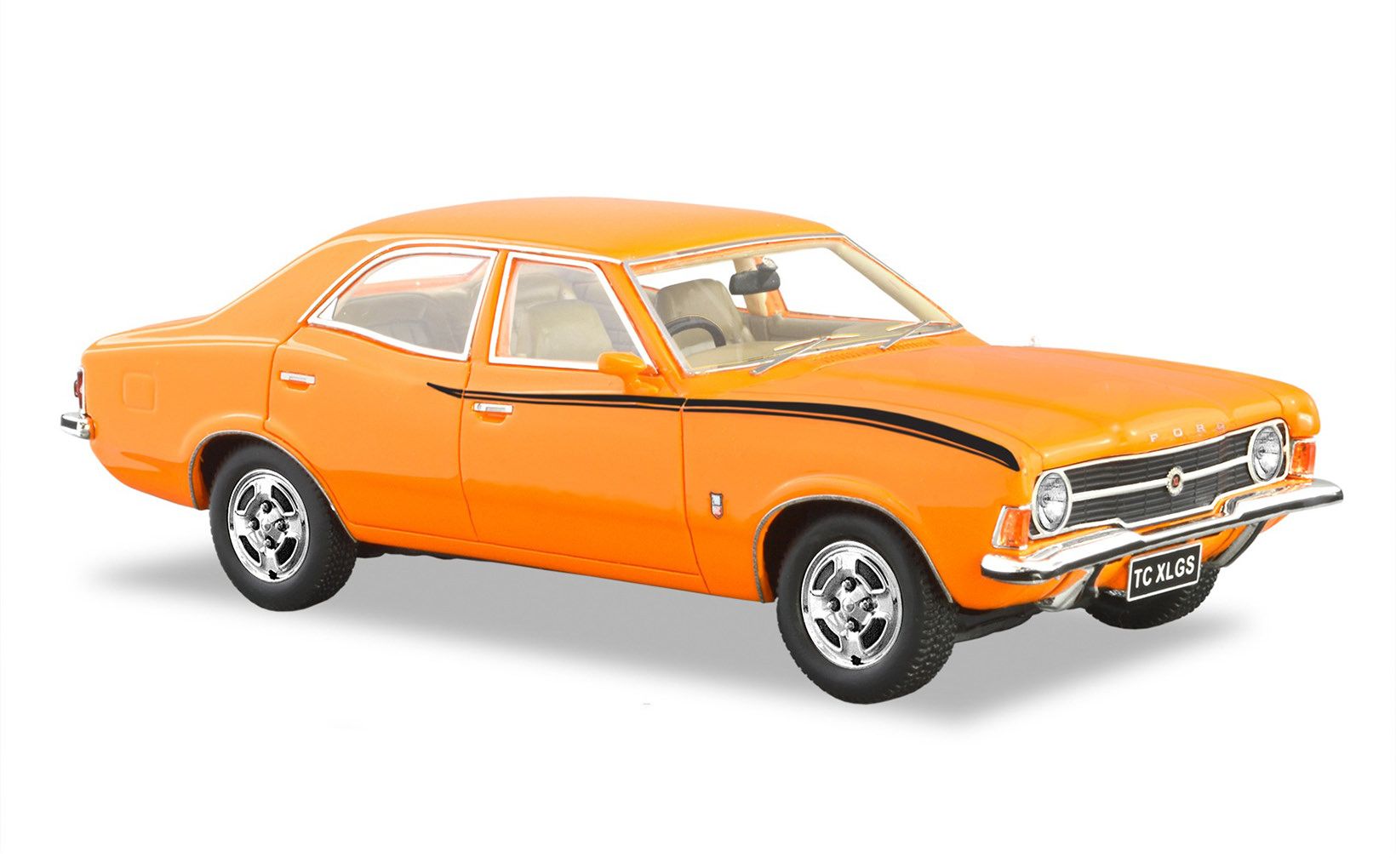 During the fuel crisis of the early 70’s more manufacturers were turning to smaller packages to appeal to this growing market. Ford in the UK re-styled its popular Cortina range, offering more of an American appearance with “coke bottle” rear quarters. The Cortinas made in Australia offered a choice of four cylinder or six cylinder engine options - the latter offering blistering acceleration in a straight line, while being somewhat of a “lead tipped arrow” in the handling stakes. A “power bulge” in the bonnet denoted the models fitted with the six. The TC Cortina was a popular car in Australia and was offered in a series of trim levels as well as in station wagon form. This XL variant in 1/43rd scale really captures the unique look of the car very accurately, including rallye stripes (similar to the XA Falcon) and sporty wheel covers. A great addition to any Australian streetscape collection. Order yours today! 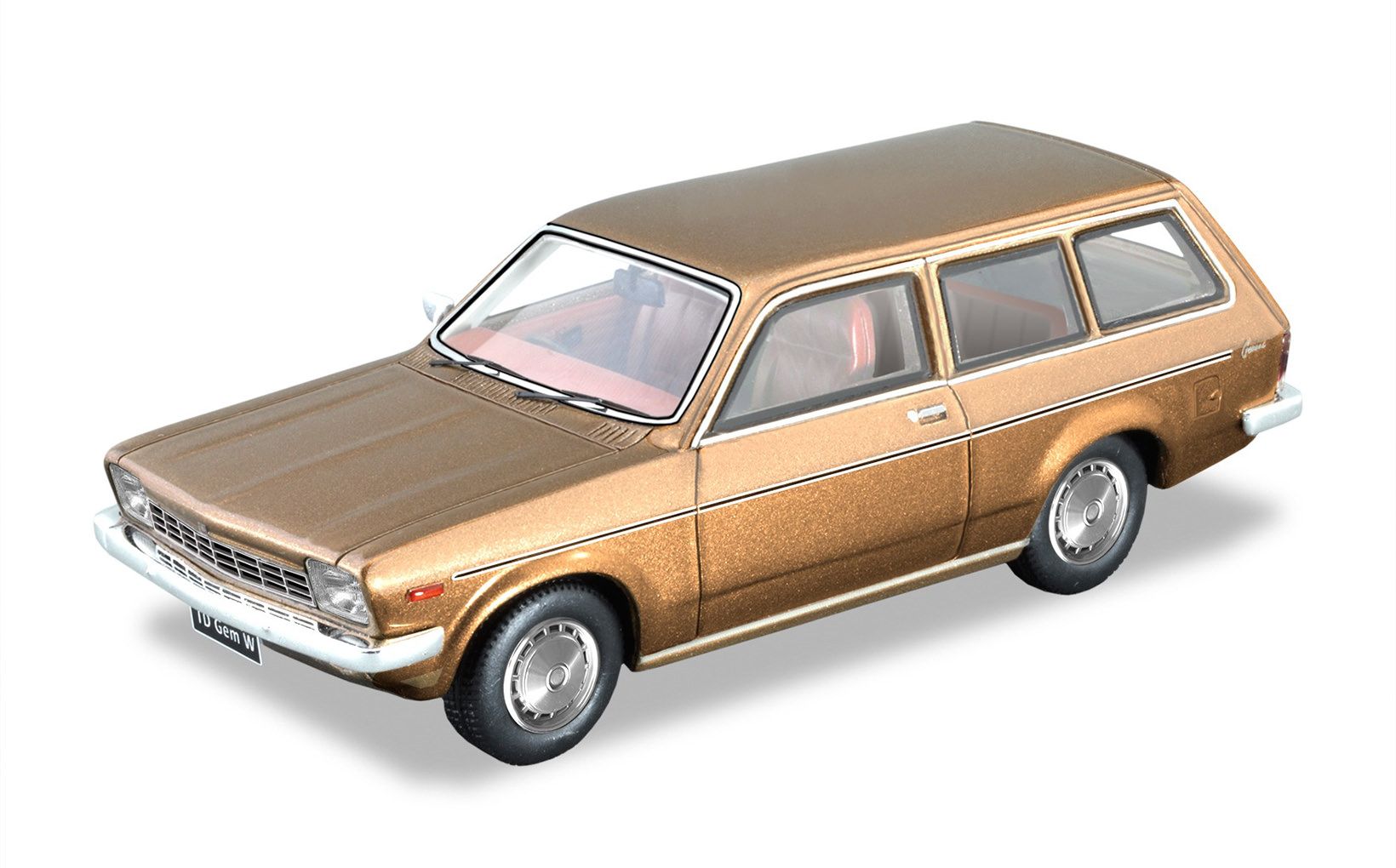 “You and I and Gemini” or so the jingle went in the Holden advertising of the time. The Gemini was a very popular small car offering from Holden. The company leveraged its relationship with Isuzu (partially owned by parent General Motors) to secure a small car in sedan, coupe, wagon and panel van form. While a two door station wagon may seem somewhat counter intuitive, the little Gemini wagon was popular with those people who may have used the car for delivery duties during the week and as a family hauler on weekends. Trax has captured the look of this car very well in 1/43rd scale, even down to the gold finish on this example, which was atypical of the 1970’s. Load up with yours today! 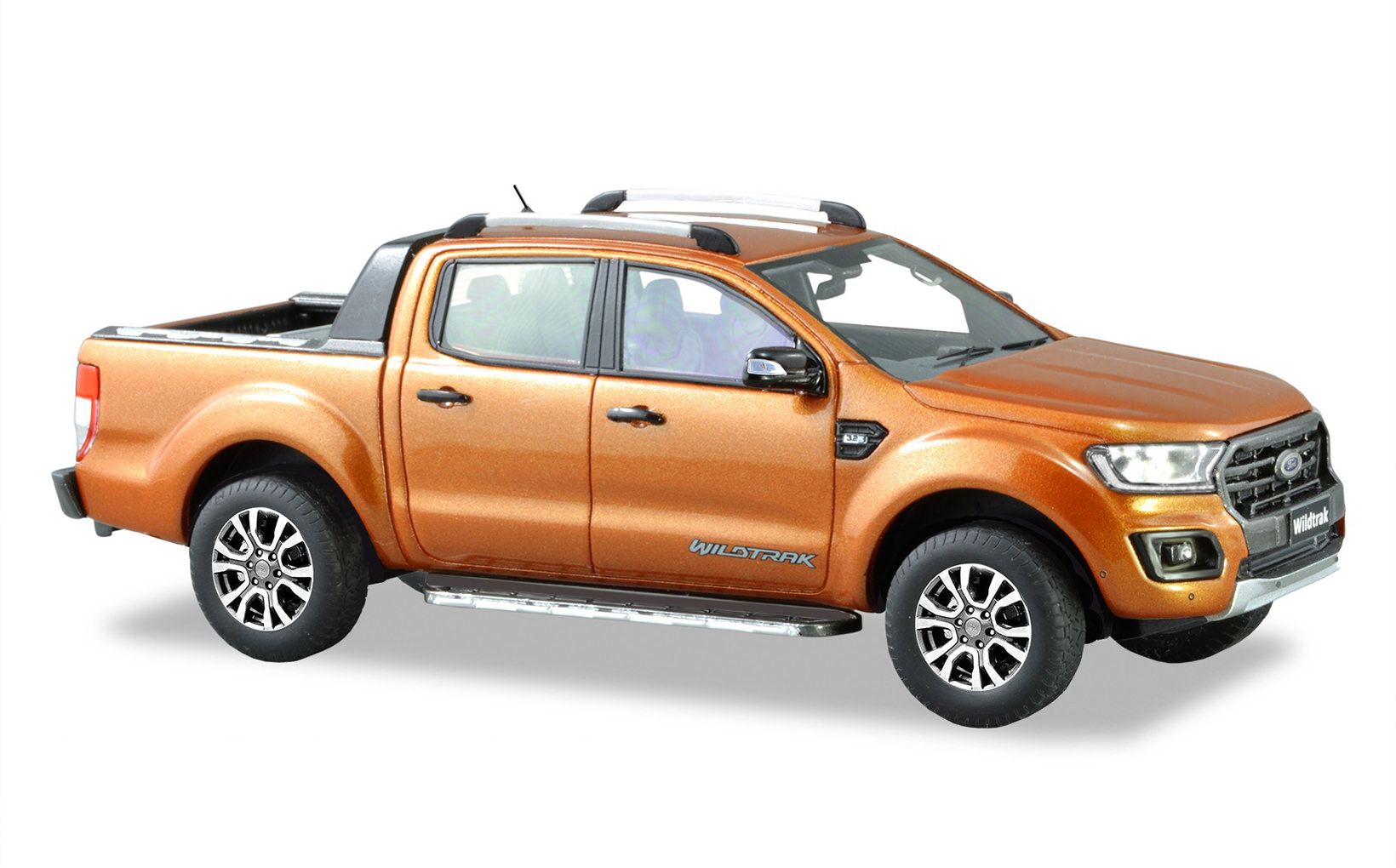 The Ford Ranger has been a smash hit success in Australia - at times knocking off the Toyota Hilux. The Ranger is a global vehicle that was actually designed right here in Australia, by the talented team at Ford Australia. The Wildtrak is a dual cab, 4x4 that blends comfortable motoring with great working capacity - a dual purpose role that has no doubt led to its success. Trax has done a superb job with this 1/43rd scale model which includes roof racks, tonneau cover, aerial and much more. “Trak” yours down today! 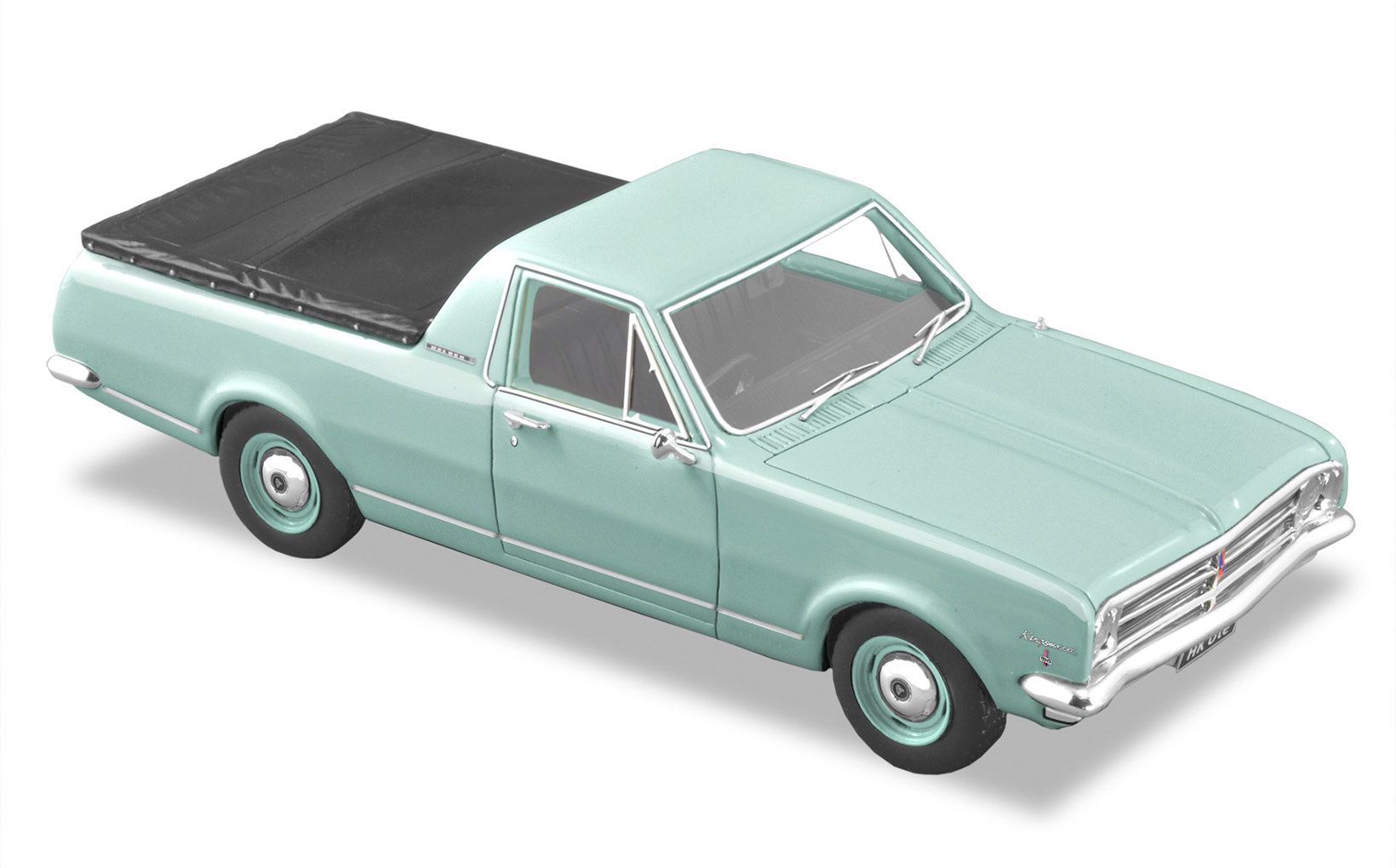 The Aussie ute is synonymous with our car culture, especially in the form of a Holden ute. The HK was the first of a new body style from Holden - one which was larger and more contemporary. The HK offered a choice of six cylinder or V8 engines and reflected a coming of age for the Australian motor industry, when consumers had more comfort, more power, more technology and more choice. This Aussie icon has been faithfully reproduced by Trax in 1/43rd scale and even includes an optional soft tonneau. Secure yours today! 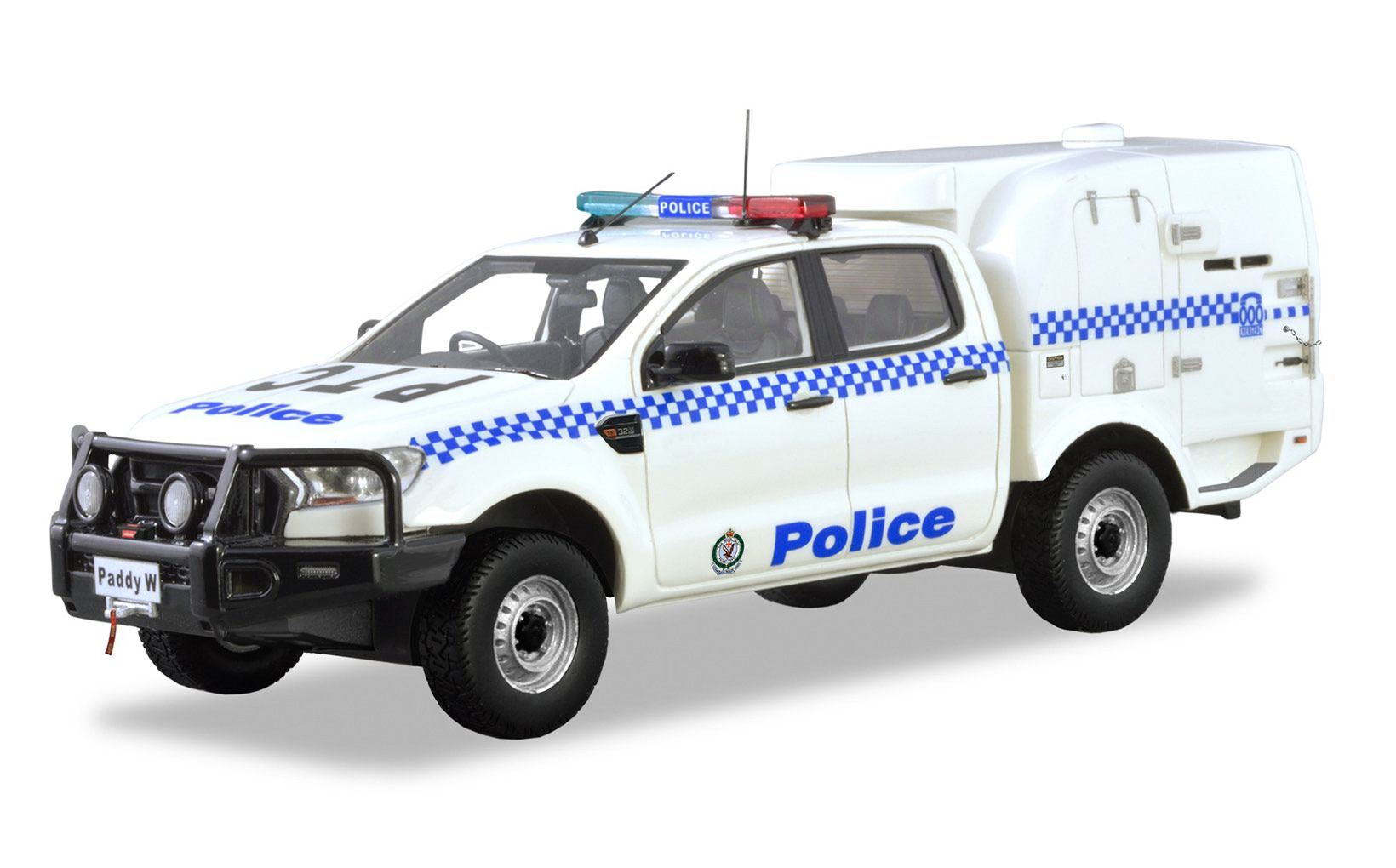 This 1/43rd scale model accurately portrays the latest in Police equipment. The Ford Ranger offers a rugged platform for the movement of the disorderly and is a common sight on the streets of Sydney and its surrounds. Complete with aerials, emergency lights and graphics as well as a custom built rear “pod”, this uniquely Australian vehicle is a great addition to any Police and emergency model collection. Apprehend yours today!