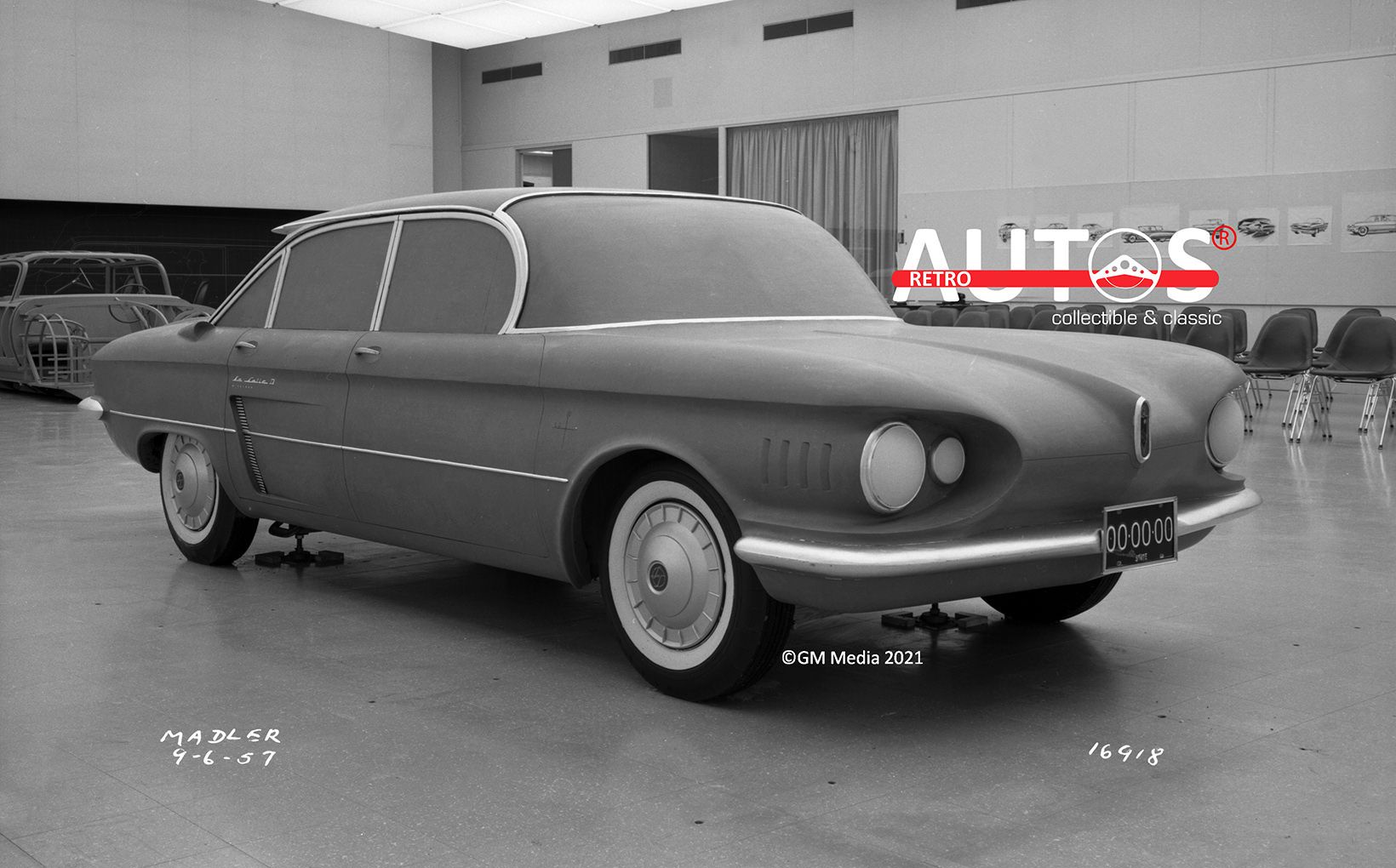 In early 1958, when Chevrolet was well advanced with the development of the Corvair, GM’s Pontiac and Oldsmobile divisions were under pressure to market their own version of the rear engined automobile. But it never happened. Retroautos has been given access many previously secret photos of these two cars. Here’s the behind the scenes story of why we never saw them.

The Corvair’s story has been told and retold many times. I doubt there is any car enthusiast who has not read, heard or seen something of the Corvair and its legacy. I wrote an extensive feature about the Corvair in the November 2018 edition of Retroautos. The story showcased previously secret photos of the many styling proposals for the car. Click on the link at the end of this story to read it. 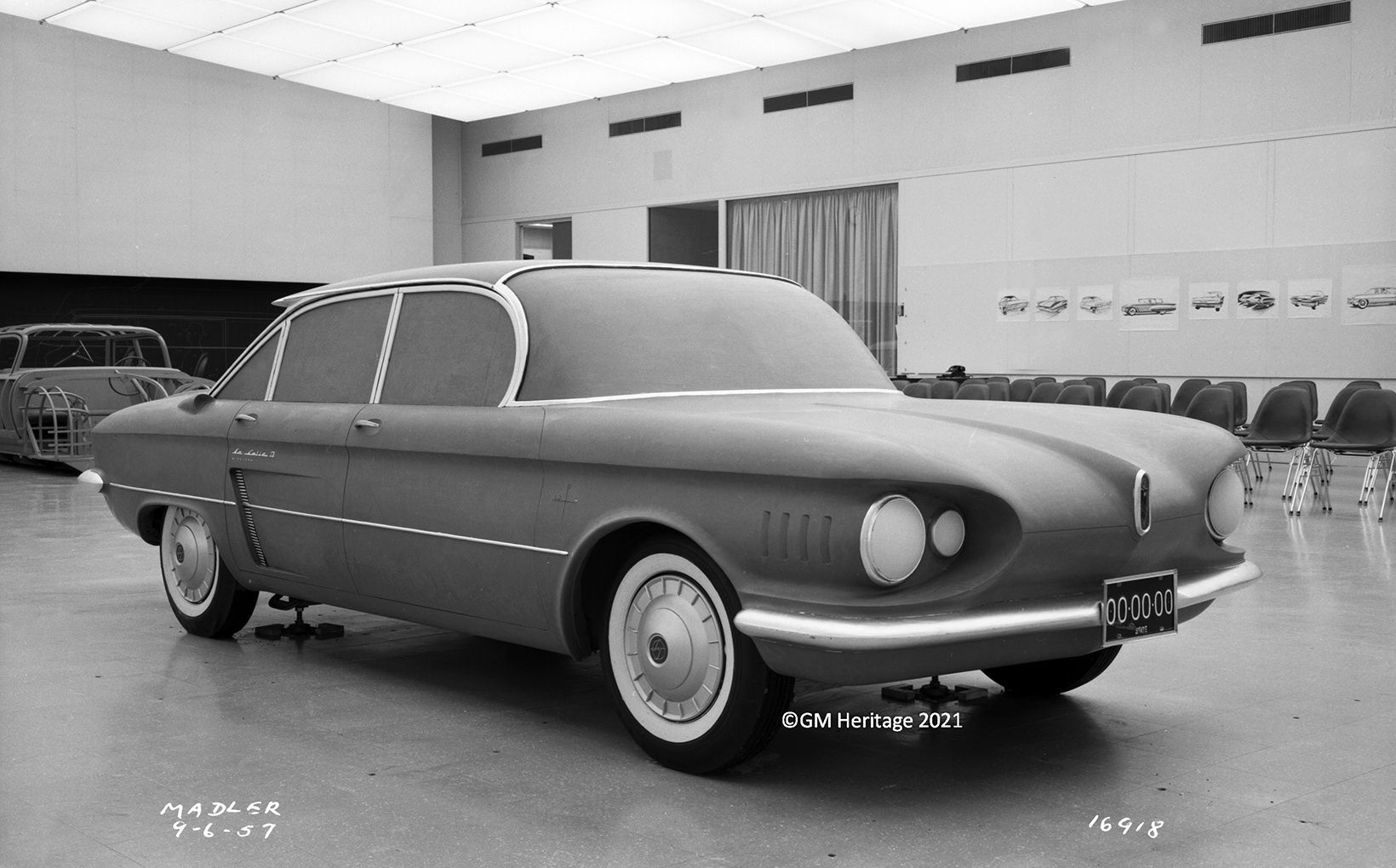 From September 1957 comes this Corvair styling proposal. A major challenge for the Chevrolet styling team was how to give the car a distinctive “grille” when it did not need one. A similar challenge now arises with electric cars.

The 1960 Corvair, Falcon and Valiant were the first serious attempts by Detroit’s “big three” car makers to offer economical, roomy and stylish compact cars. They were aimed at the increasing sales of imported smallish cars. In 1950 imports had comprised a minuscule 0.32% the US market and no one was worried. By the start of 1959 imports accounted for almost 10%, a little less than Oldsmobile’s share, and was growing. The profit and loss statements of all US-based car makers were being threatened.

Ford and Chrysler, along with American Motors and Studebaker, approached the idea of the compact as a scaled down version of traditional larger cars. Not Chevrolet. It’s general manager, Ed Cole, had long been fascinated by rear mounted air-cooled engines.

The opportunity to develop a compact car meant Cole did not hesitate to champion his preferences.

He admitted in Karl Ludvigson’s book Corvair by Chevrolet that the car was his version of an American Volkswagon. 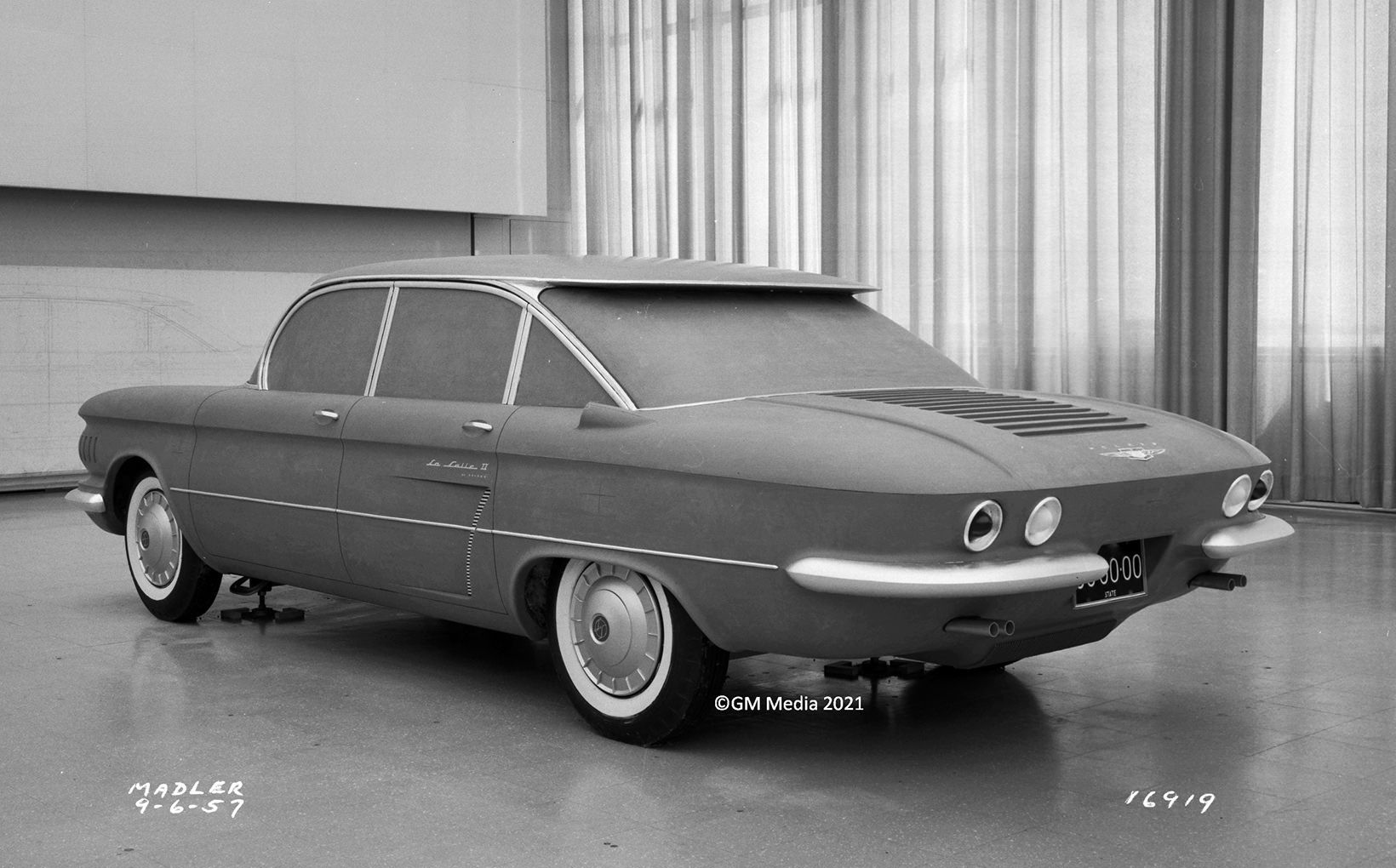 The flat top roof and a high belt line which encircles the car were early design themes which made it into the production. Note the small air scoops on the top of the fenders just aft of the rear doors.

In January 1960 Kai Hansen, the head of the Corvair project, made a presentation to the Society of Automotive Engineers in the USA. He summarised the rationale for the Corvair’s layout.

“Merely shortening the wheel base and front and rear overhang was not acceptable. To permit lower overall height and to accommodate six adult passengers, the floor hump for the drive shaft had to go. Eliminating the conventional drive shaft made it essential then that the car have either rear-engine, rear-drive or front-engine, front-drive. Before making a decision, all types of European cars were studied, including front-engine, front-drive designs. None measured up to our standards of road performance.” 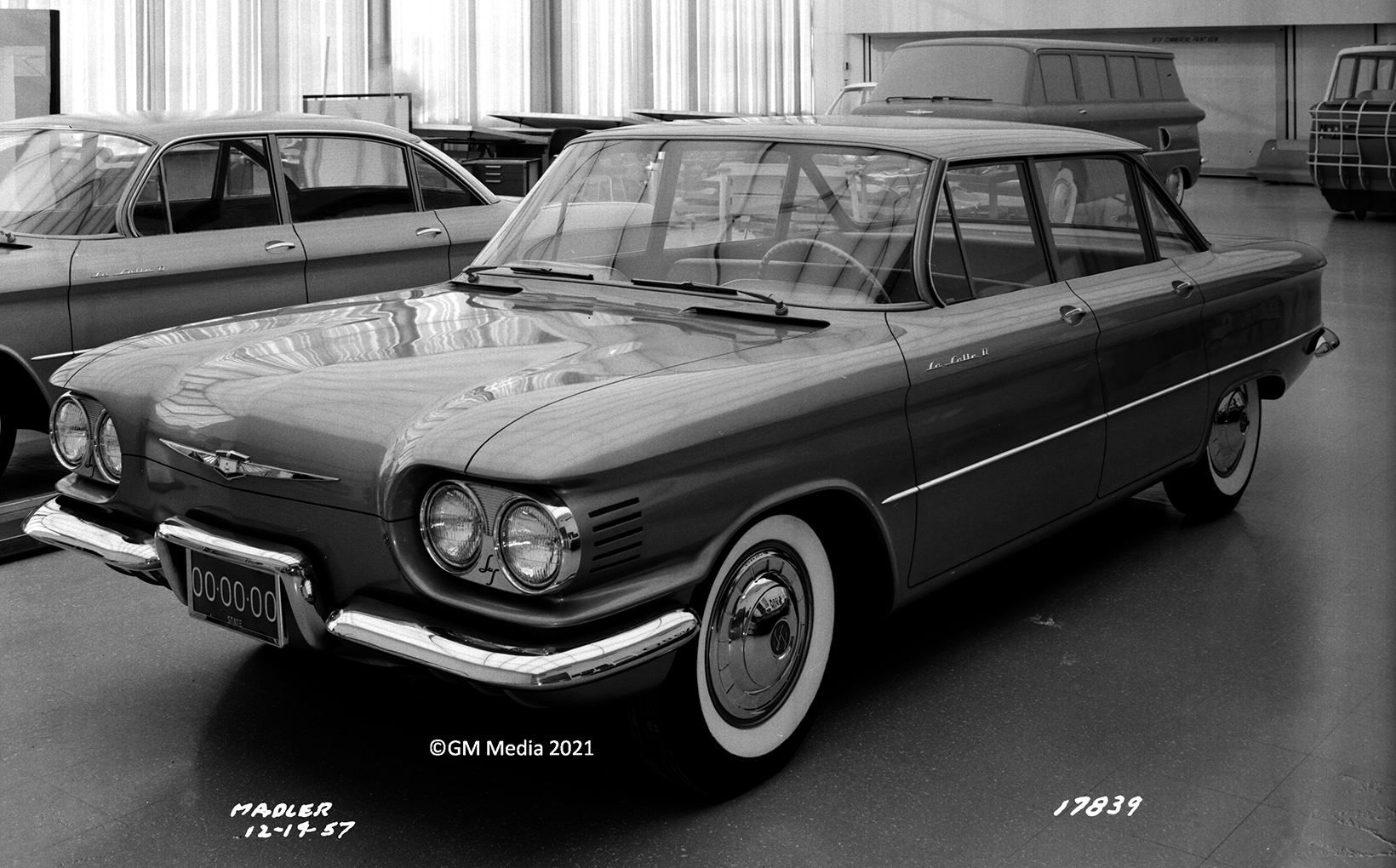 By December 1957, when this photo was taken, Chevrolet’s designers were evaluating two roof lines over a six-window glass area. Work on the Corvair-based Greenbrier van was also well underway, as seen in the background.

The Corvair programme was expensive and risky because it involved so much new, to GM, technology and engineering. GM was naturally looking for ways to spread the development costs and mitigate the risk across as many divisions as possible. And so it was that in early 1958 Pontiac and Oldsmobile executives felt the corporate pressure to join Chevrolet’s program with their own versions. You and I would call it badge engineering.

GM’s styling department was tasked with developing design proposals. By September 1958 they had come up with a fibreglass model, which looked minimally different to the Corvair and featured interchangeable Pontiac and Oldsmobile badges. Pontiac would call their car the Polaris. Oldsmobile chose Sixty-Six for theirs. Internal GM documents I have seen show the Polaris was given the project code XP707 and, as with all Corvair paperwork, was referenced as an “experimental Holden” to maintain secrecy. 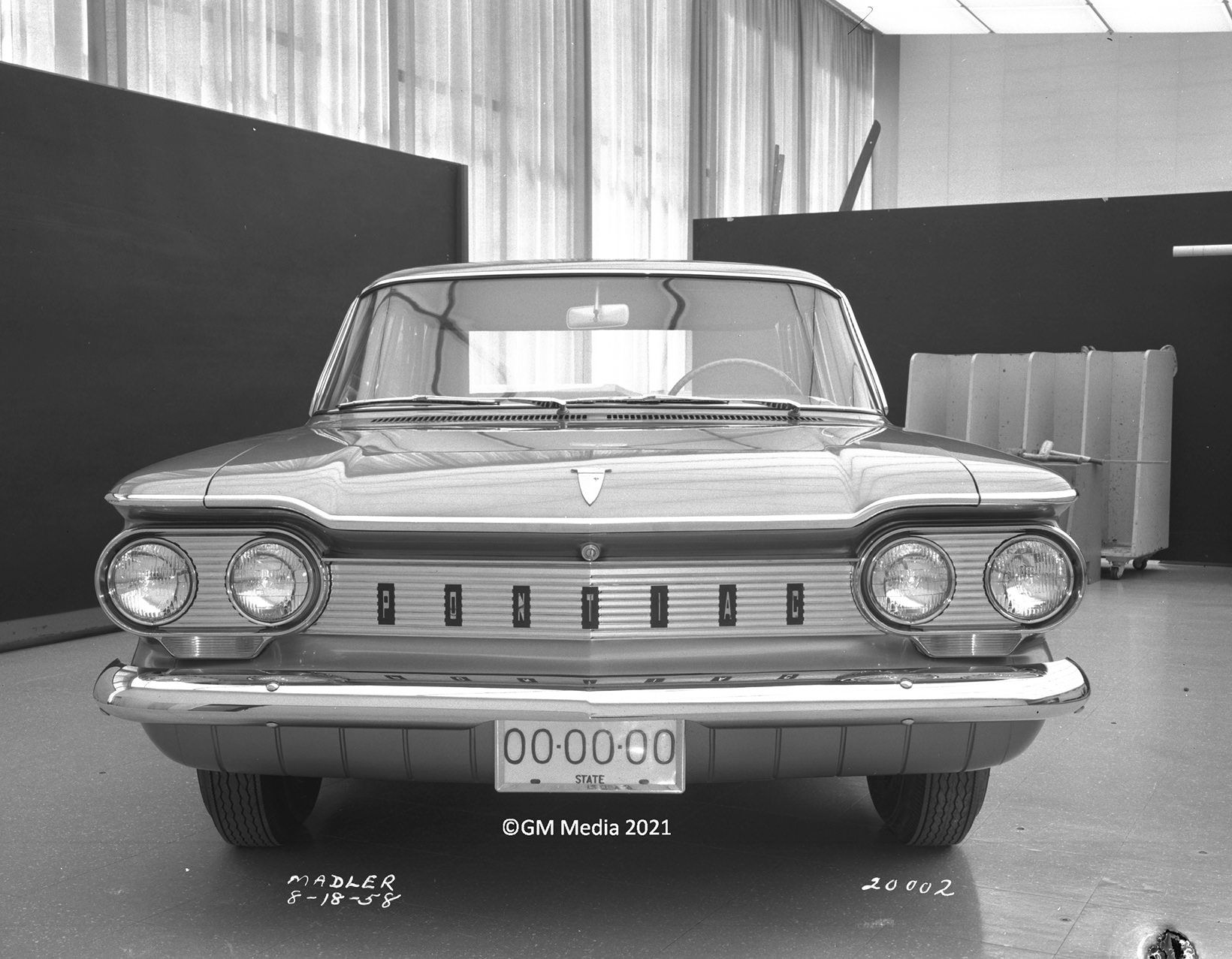 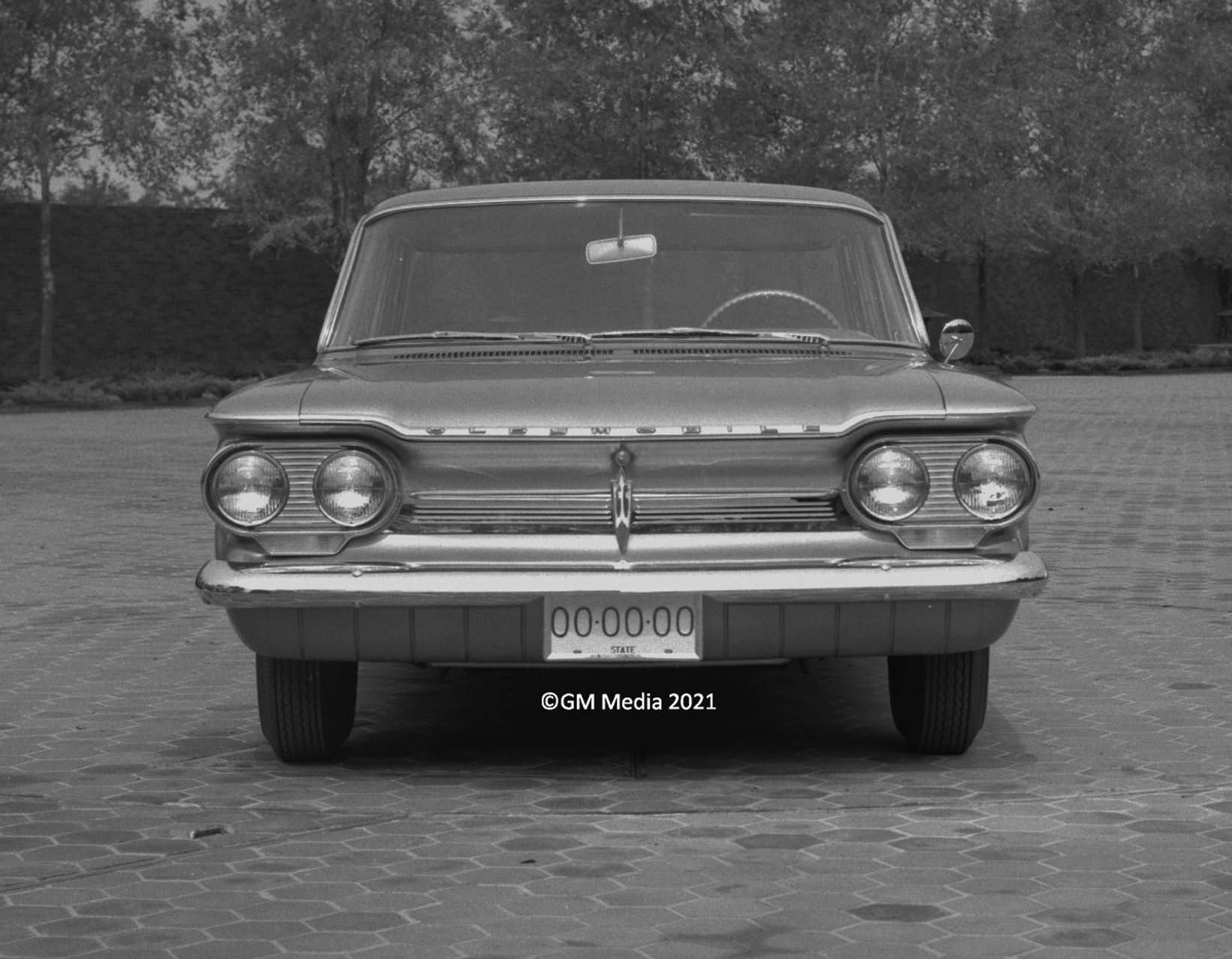 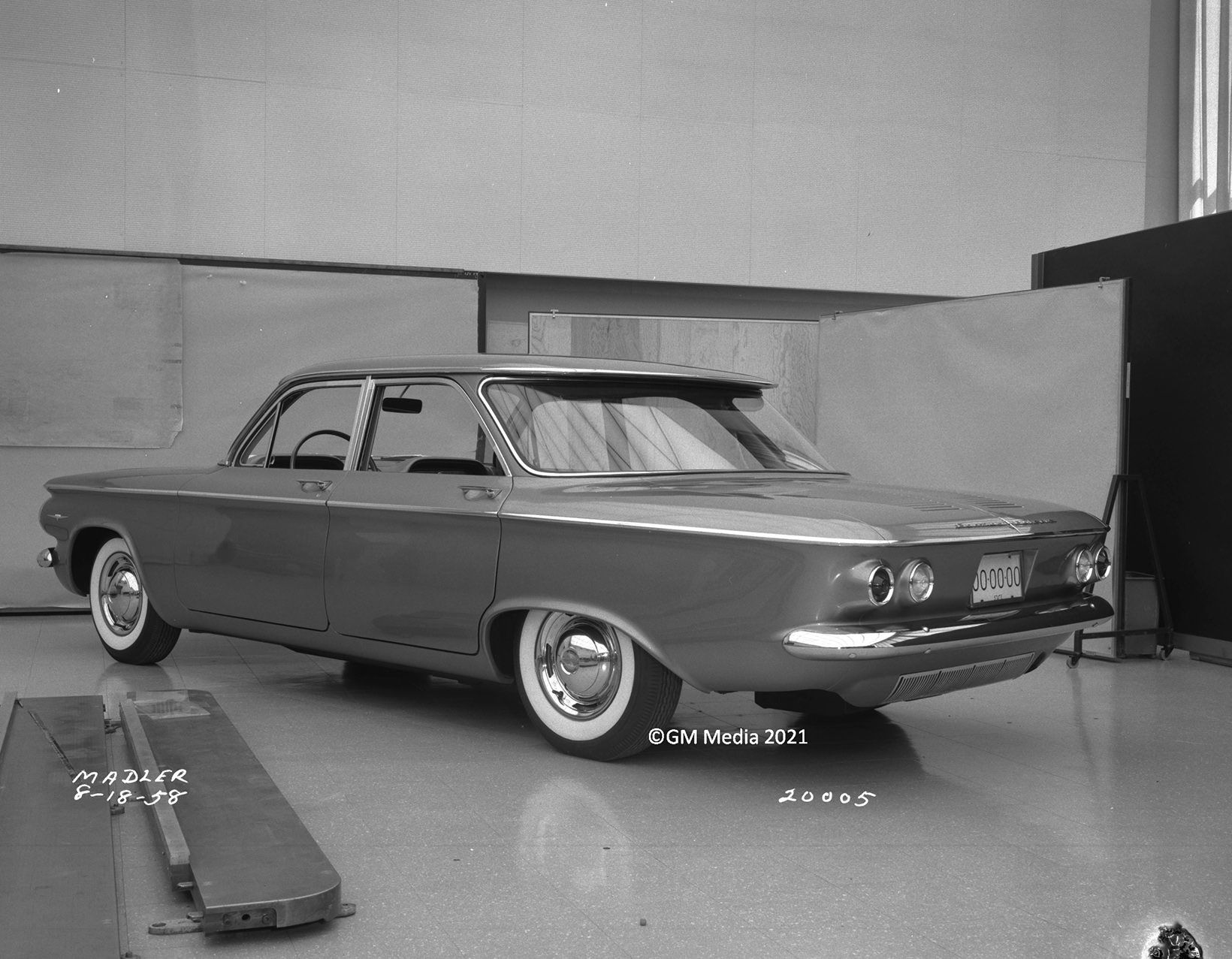 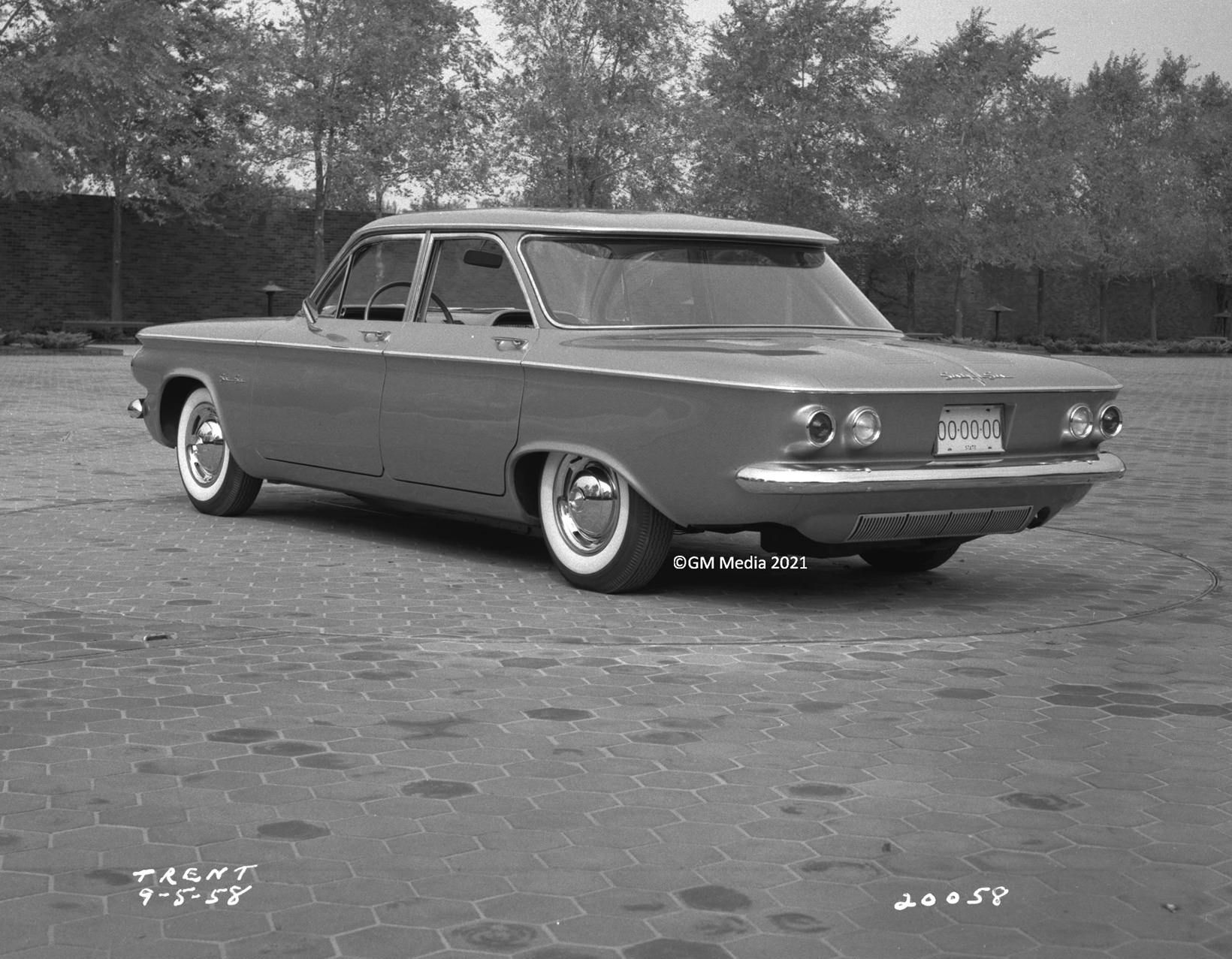 It is hard to distinguish between the first proposals for the Pontiac Polaris and Oldsmobile Sixty-Six in this series of comparison photos. Here’s the key: The Polaris is inside GM design studios. The Sixty-Six is outside in the large courtyard that adjoins the design area. The Polaris photos were taken in August 1958 and the Sixty-Six images one month later. The same fibreglass model was used.

The lack of brand differentiation led Pontiac to request a re-work and in January 1959 a clay model was shown to executives. It featured Pontiac’s split grille (yet to be seen on its full-sized cars) and a heavily revised rear end. A fibreglass model was also constructed, but that’s as far as it went. Pontiac’s newly appointed boss, Semon “Bunkie” Knudsen, and his chief engineer, John Z DeLorean, had other ideas.

The two executives were not impressed with the Corvair for a number for reasons. DeLorean identified one in his book On a Clear Day You Can See General Motors. He said that Bunkie and he had seen a Chevrolet engineer roll a Corvair at GM’s proving grounds. This alerted them to potential safety issues. 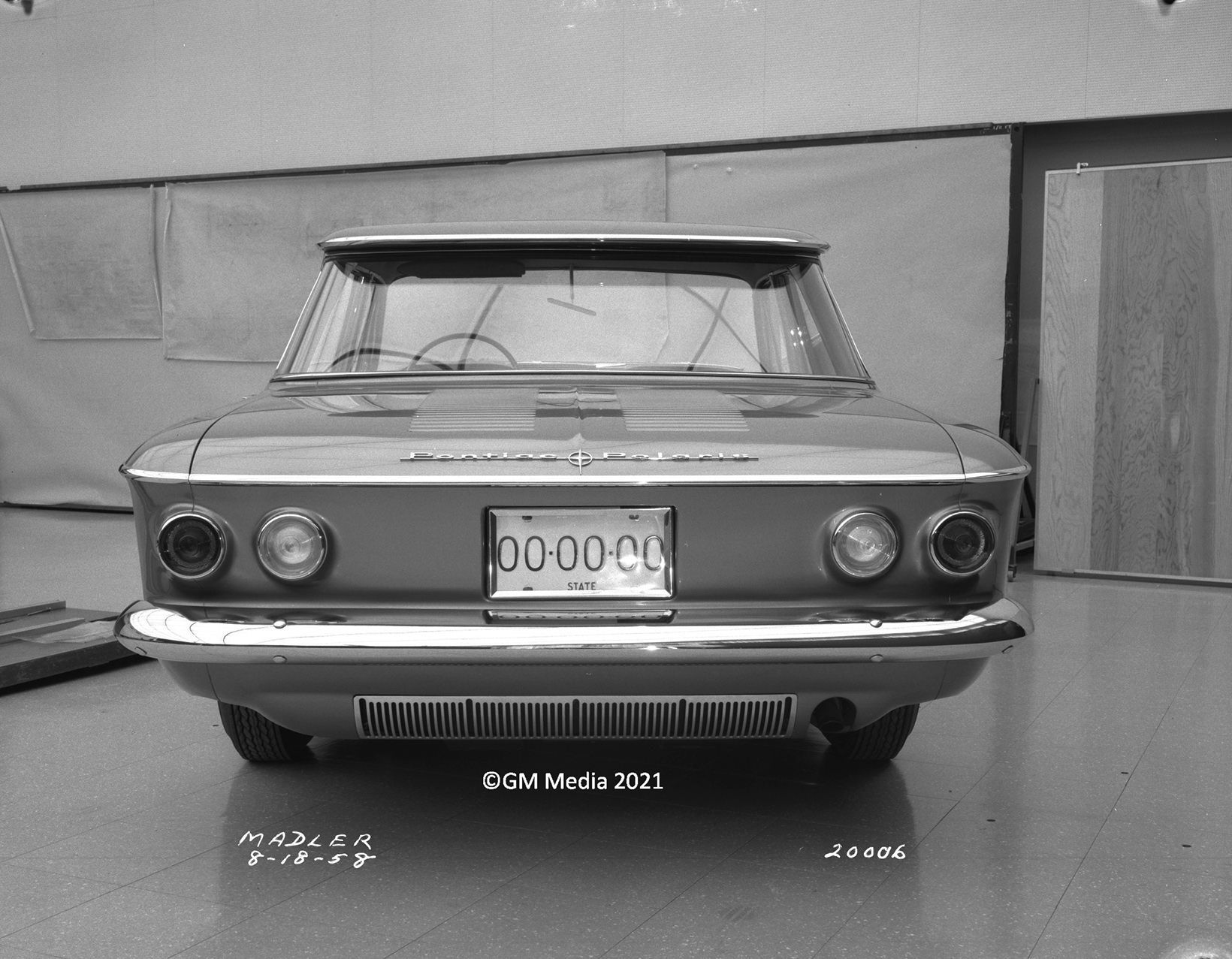 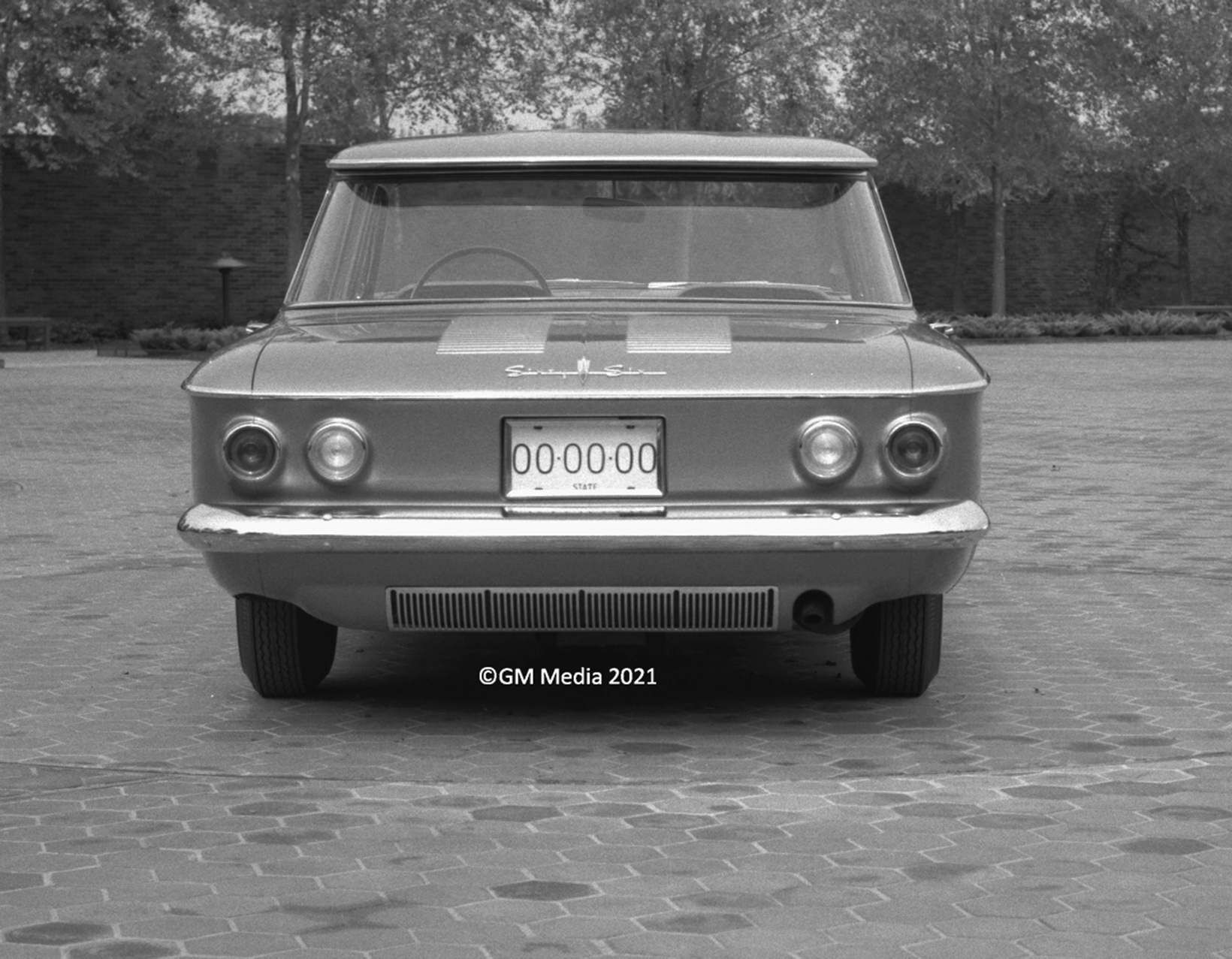 From the rear the Polaris and the Sixty-Six are identical to the Corvair, yet they would have retailed for 10-20 % more.

In addition to the safety concerns, Knudsen could not see what marketing benefits could be extracted from a Corvair badged as a Pontiac nor justify the higher price that Pontiac traditionally charged over Chevrolet. For a start, it would have to use the Chevrolet engine. It was not bigger, longer nor more powerful—all Pontiac attributes that supported its price position. Knusden envisaged the tough questions that his dealers would be asked by loyal Pontiac buyers when trying to sell them a Polaris. “This is not a real Pontiac? It does not have a Pontiac engine! Show me where it is different to that Chevy which costs 10% less? Is every new Pontiac going to have the little motor in the trunk?”

On top of that, the Corvair could not accept a V8, restricting its marketing viability just as Pontiac was ramping up its wide track, big engine, high performance image. So, Knudsen pushed back. No Corvair clone for him! 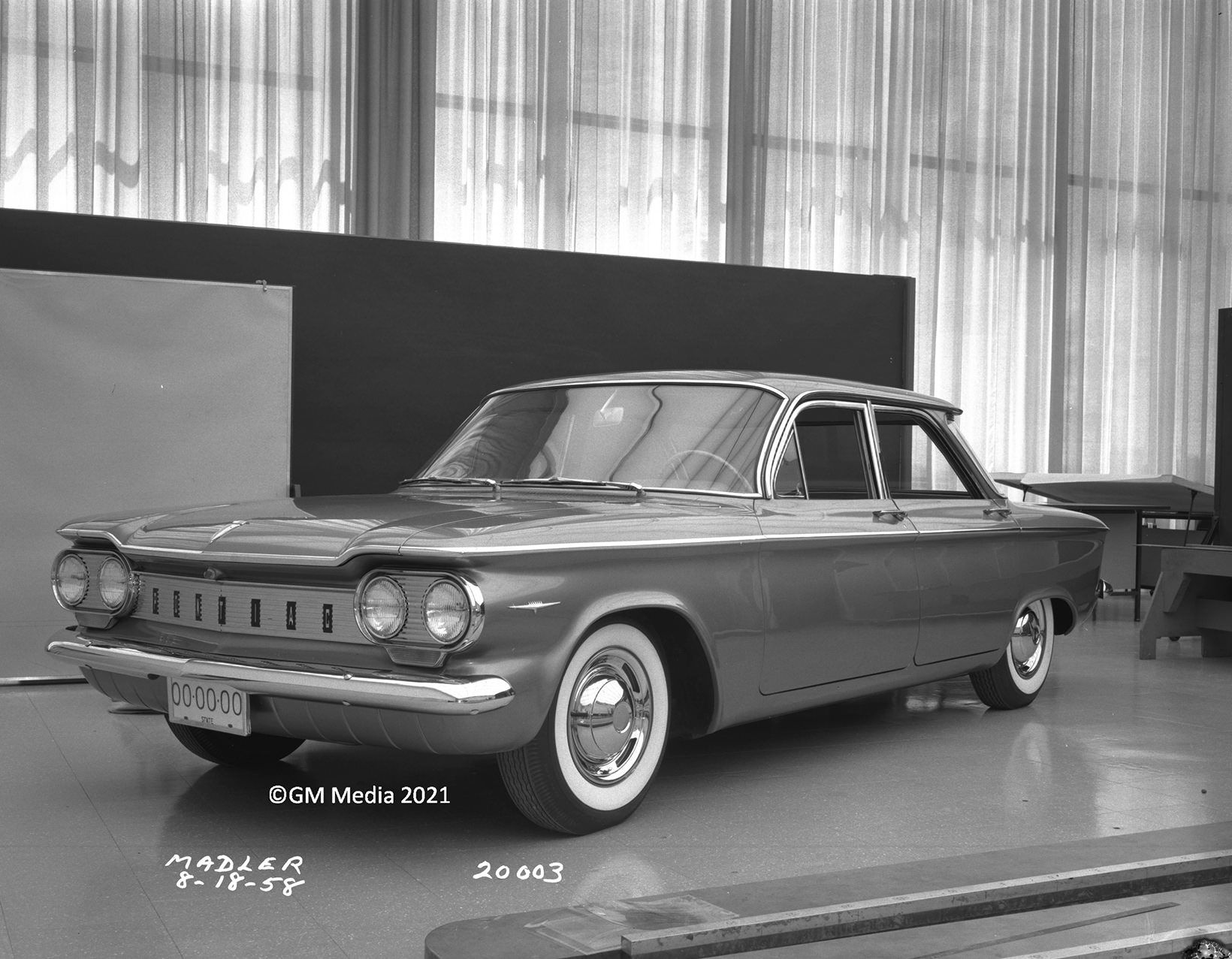 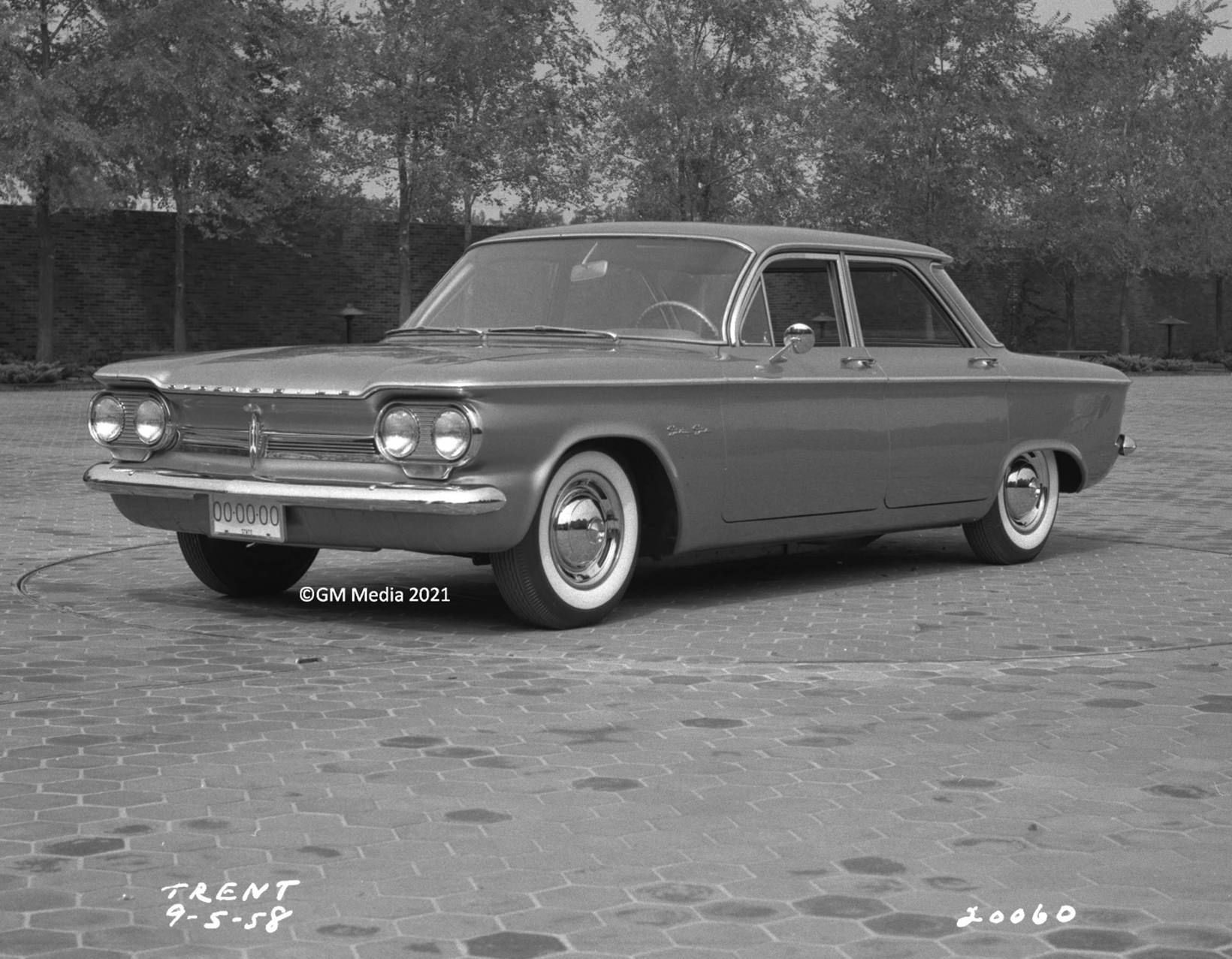 The only way to tell them apart is by the badges placed on various panels around the cars. Even the hub caps are the same. 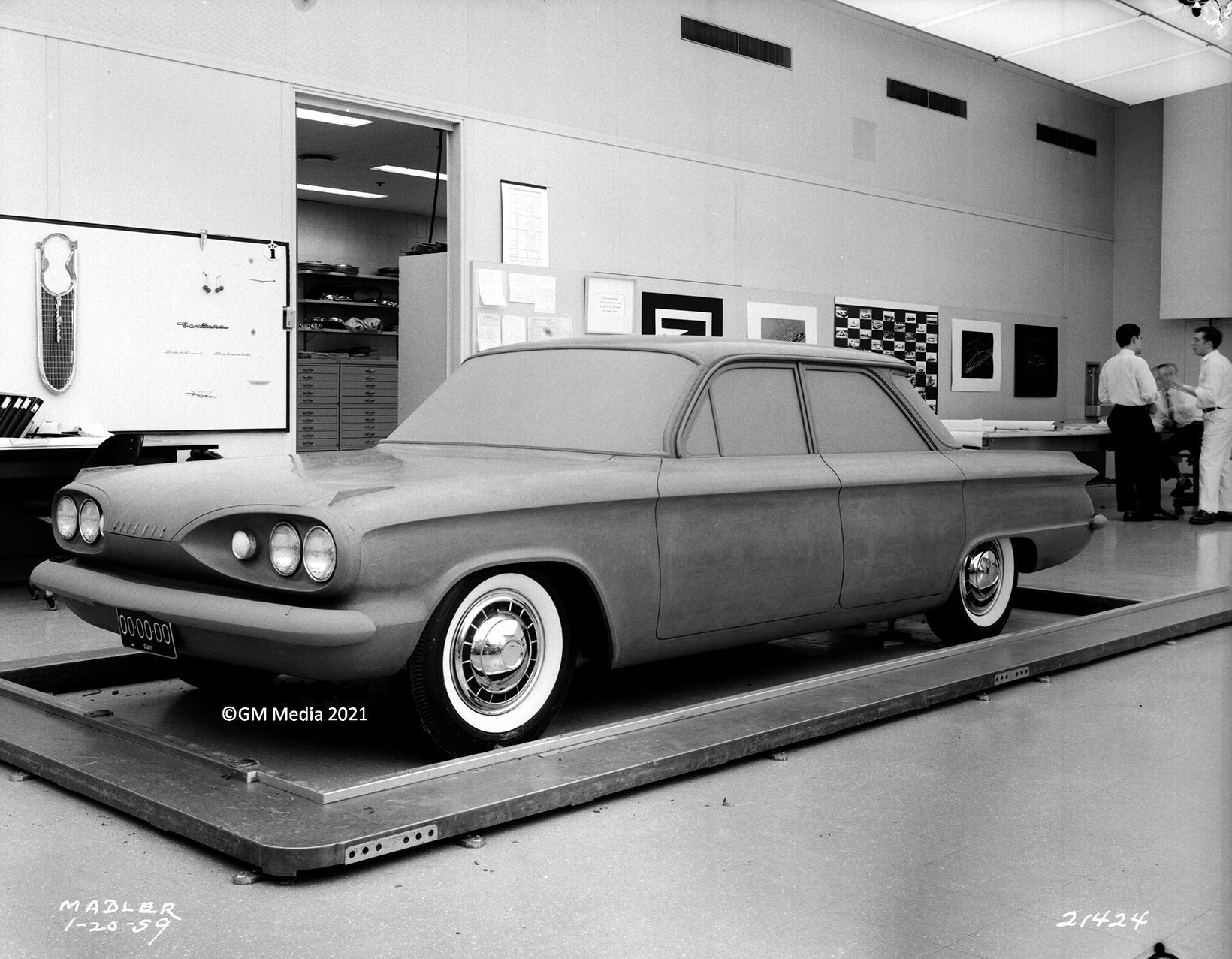 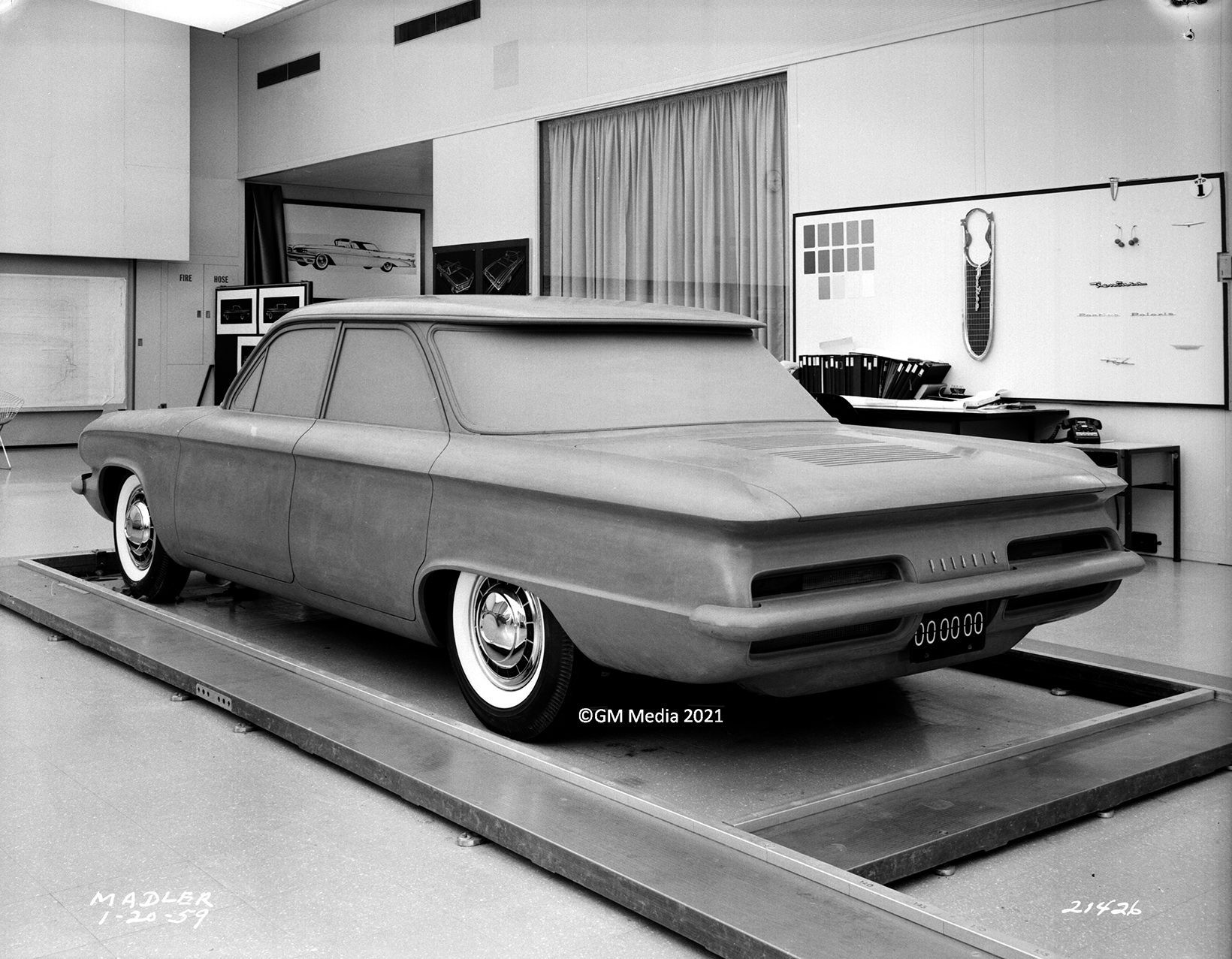 In January 1959 Pontiac revised its Polaris to increase the visual difference with the Corvair. Using a squared off theme, the Pontiac styling team has created an attractive automobile while still using the Chevrolet’s roof, pillars and doors.

Oldsmobile executives, led by general manager Jack Wolfram, shared Knudsen’s views. How could their dealers convince Oldsmobile buyers to pay up to 20% more for a Corvair? It is not that Knudsen and Wolfram were against selling a compact car. What they wanted were smaller cars that embodied their specific brand heritages. 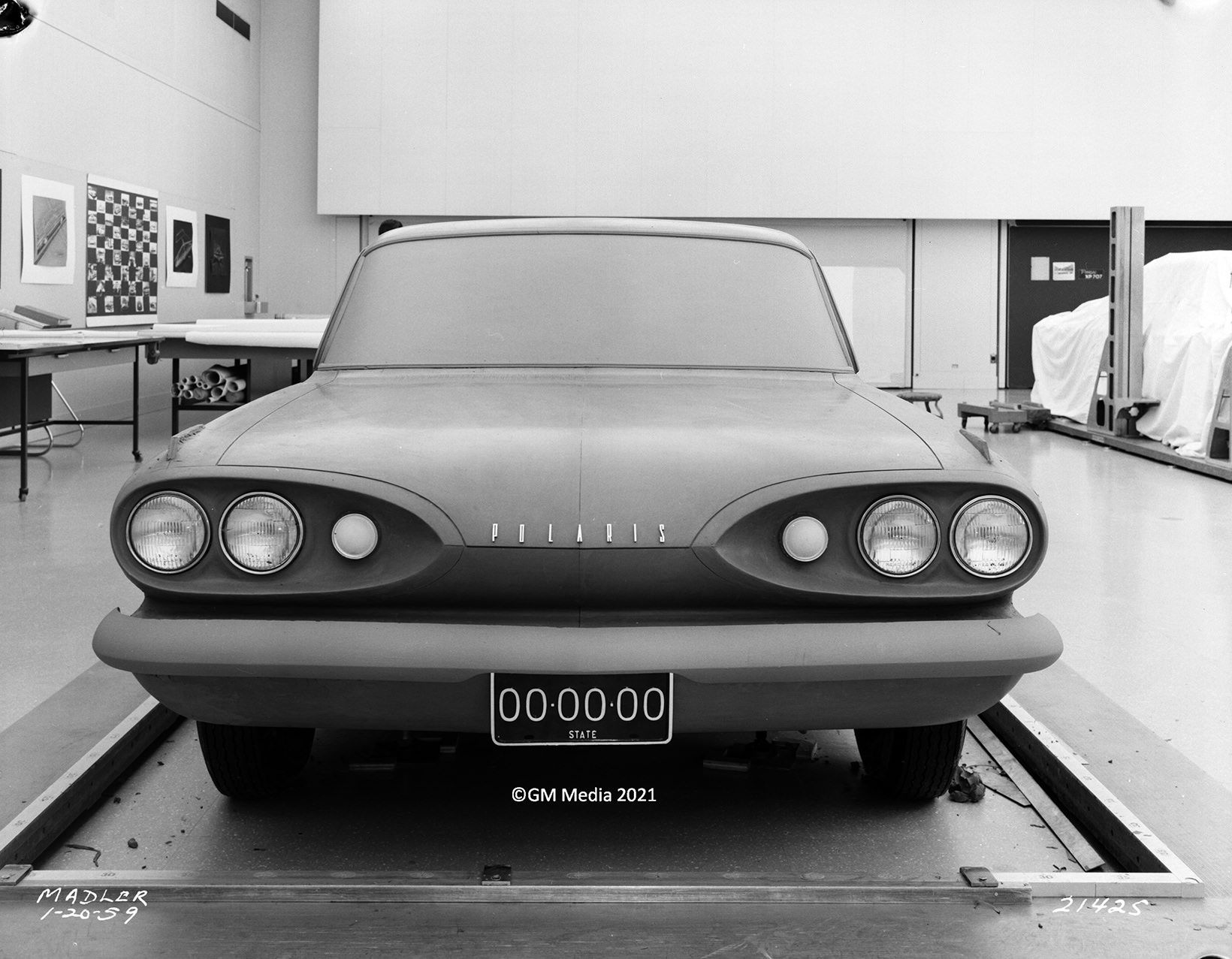 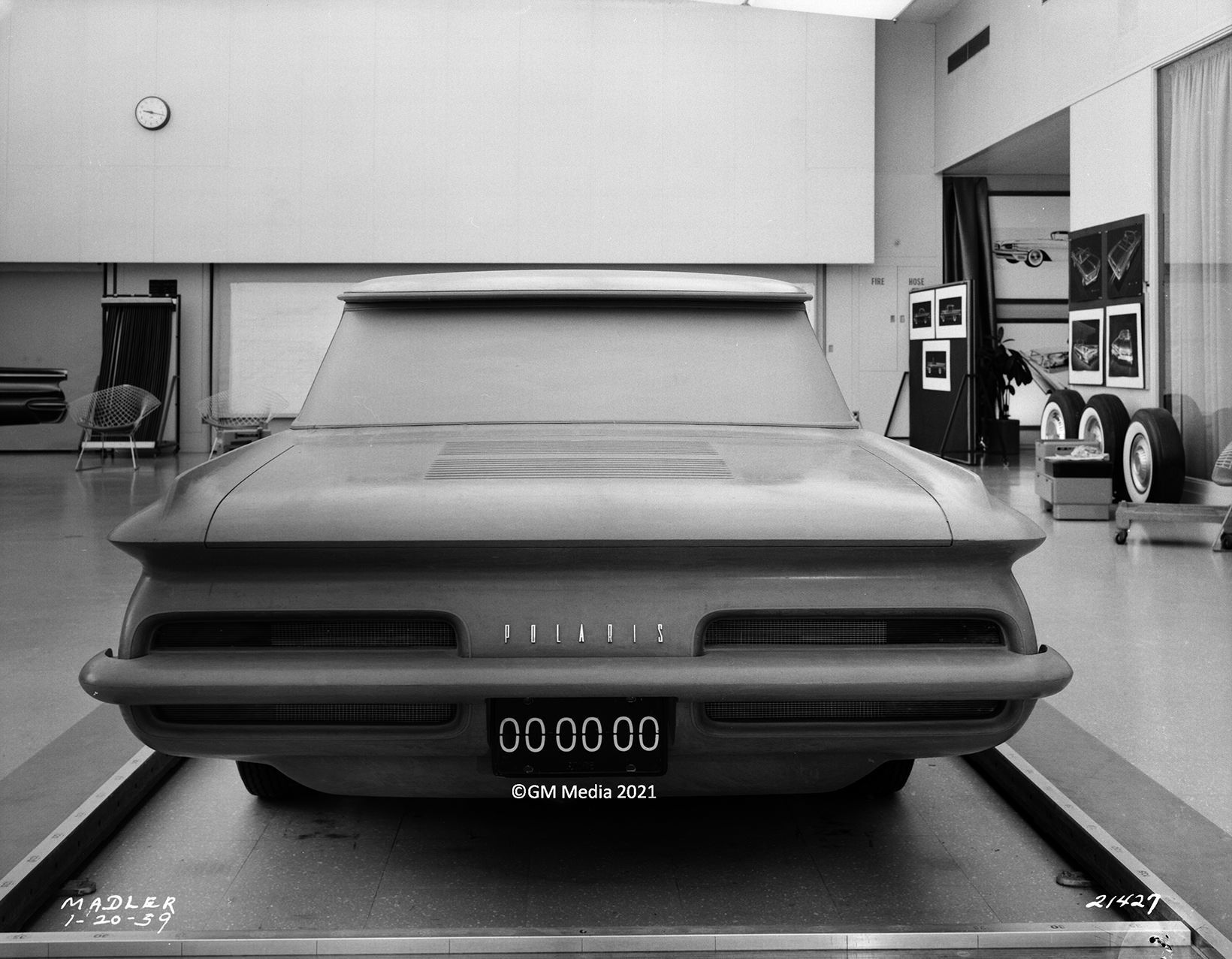 The split grille and wide flat rear end attempt to evoke Pontiacs wide-track performance image. A fibreglass model of this design was built but the project was terminated.

Such was the power of the divisional general managers at GM back in the early 1960s that the company agreed to their demands. The “senior compacts” arrived for the 1961 model year: Pontiac Tempest, Oldsmobile F85 and Buick Special.

Pontiac led the styling and platform packaging for the three divisions and that’s why these cars look similar with their six-window roof line. They were based on the Corvair unitary frame and shared a 112 inch/2845mm wheelbase with water-cooled engines and rear wheel drive. All could be ordered with a V8 and each was technically innovative for the times.

You can read more about the technical innovations of the Tempest, Special and F85 in a previous Retroautos about the new cars of 1961. The link is at the end of this story. 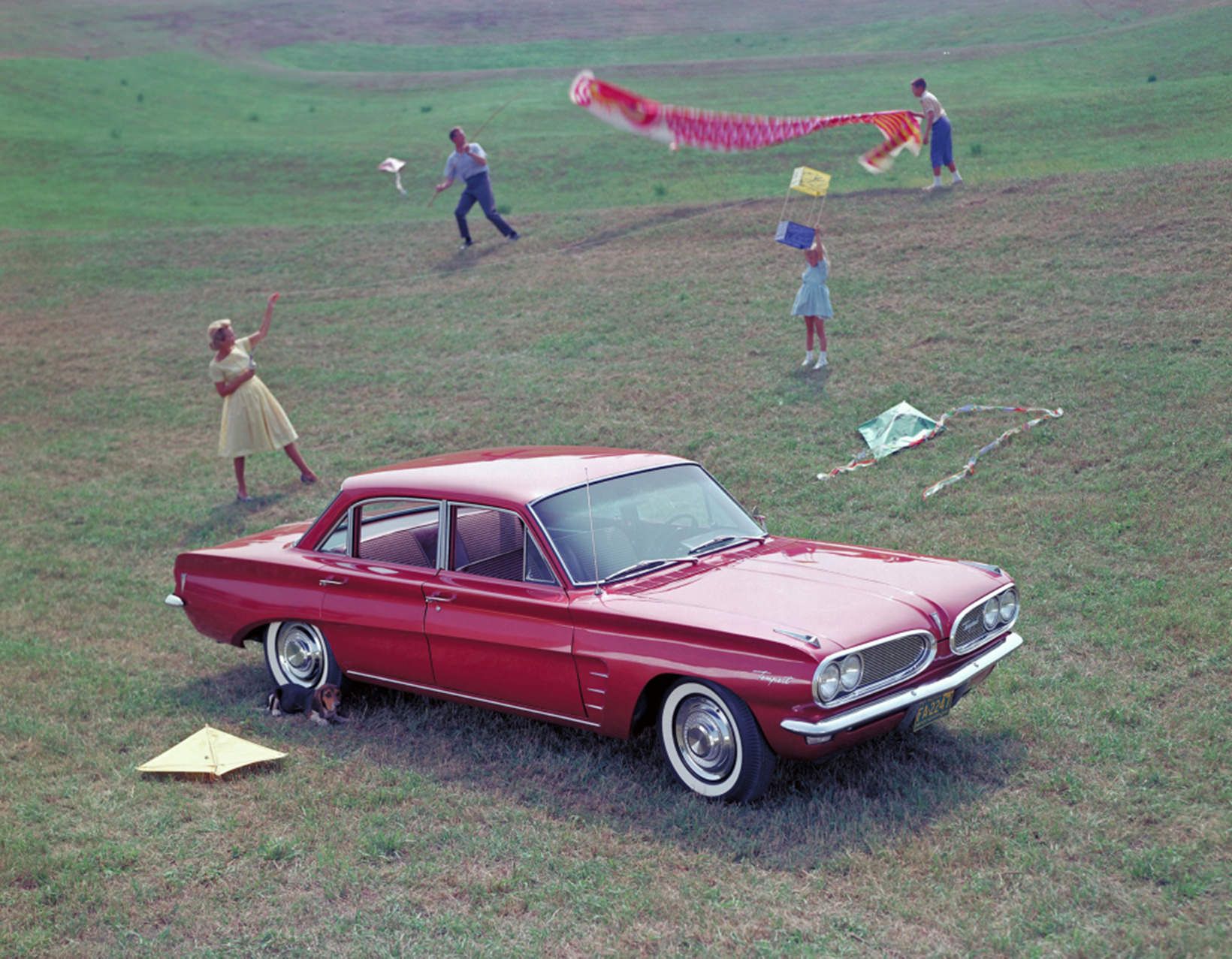 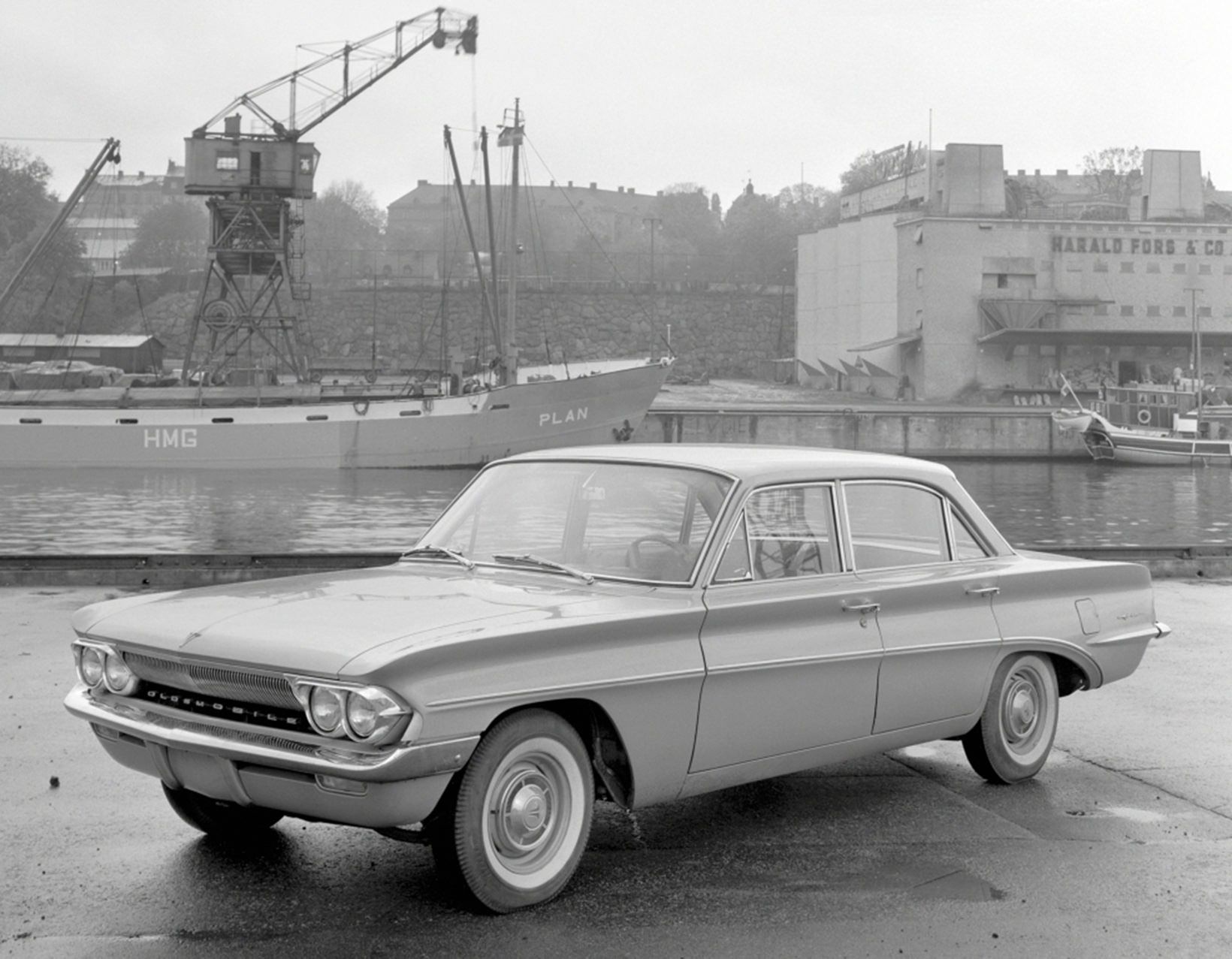 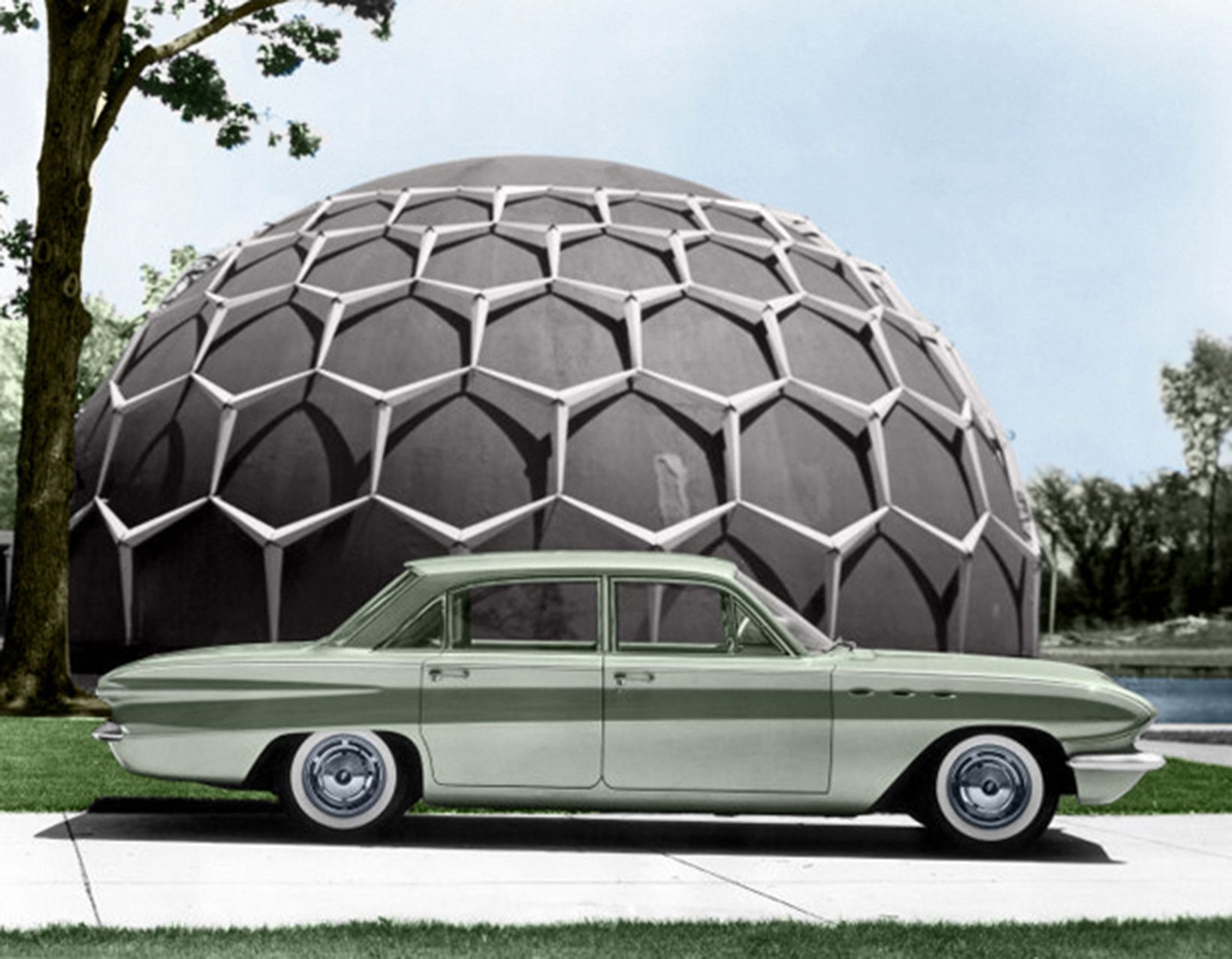 The Pontiac Tempest, seen here in red, shared its six-window body design with the Oldsmobile F85 and Buick Special. The green Buick was photographed next to the black and white Longway Planetarium in Flint, Michigan.

What do you reckon? Would the Pontiac and Oldsmobile Corvair clones have been successful?

Well, I’m with Knudsen and Wolfram. Other than styling and interior appointments, what extra value could Pontiac and Oldsmobile have applied to the Corvair to entice customers to pay 10-20% more for one?

The numbers, as always, provide the insights that determine the narrative. In the period 1961 to 1963 the senior compacts went to more than 1,000,000 buyers. By comparison, the Corvair reached sales of around 650,000 for that same period.

Based on those statistics it is hard to imagine that sales of the Polaris and Sixty-Six would have matched Corvair’s. Most likely they would have been perceived as poorly executed and cynical badge engineering exercises with significant potential to damaged Pontiac’s and Oldsmobile’s carefully crafted images.

But there’s more. We need to be very grateful for Bunkie’s rejection the Corvair. Had it not been for the Tempest, Special and F-85, we would not have had the Pontiac GTO, Buick GS and Oldsmobile 442 muscle cars.

Thanks to John Kyros at GM Heritage for his research. Retroautos is written and published by David Burrell with passion and with pride. Retroautos’ stories and images are copyrighted. Reproducing them in any format is prohibited, unless combined written permission is granted by the author and Shannons.

Read an extensive Retroautos feature on the development of the Corvair.