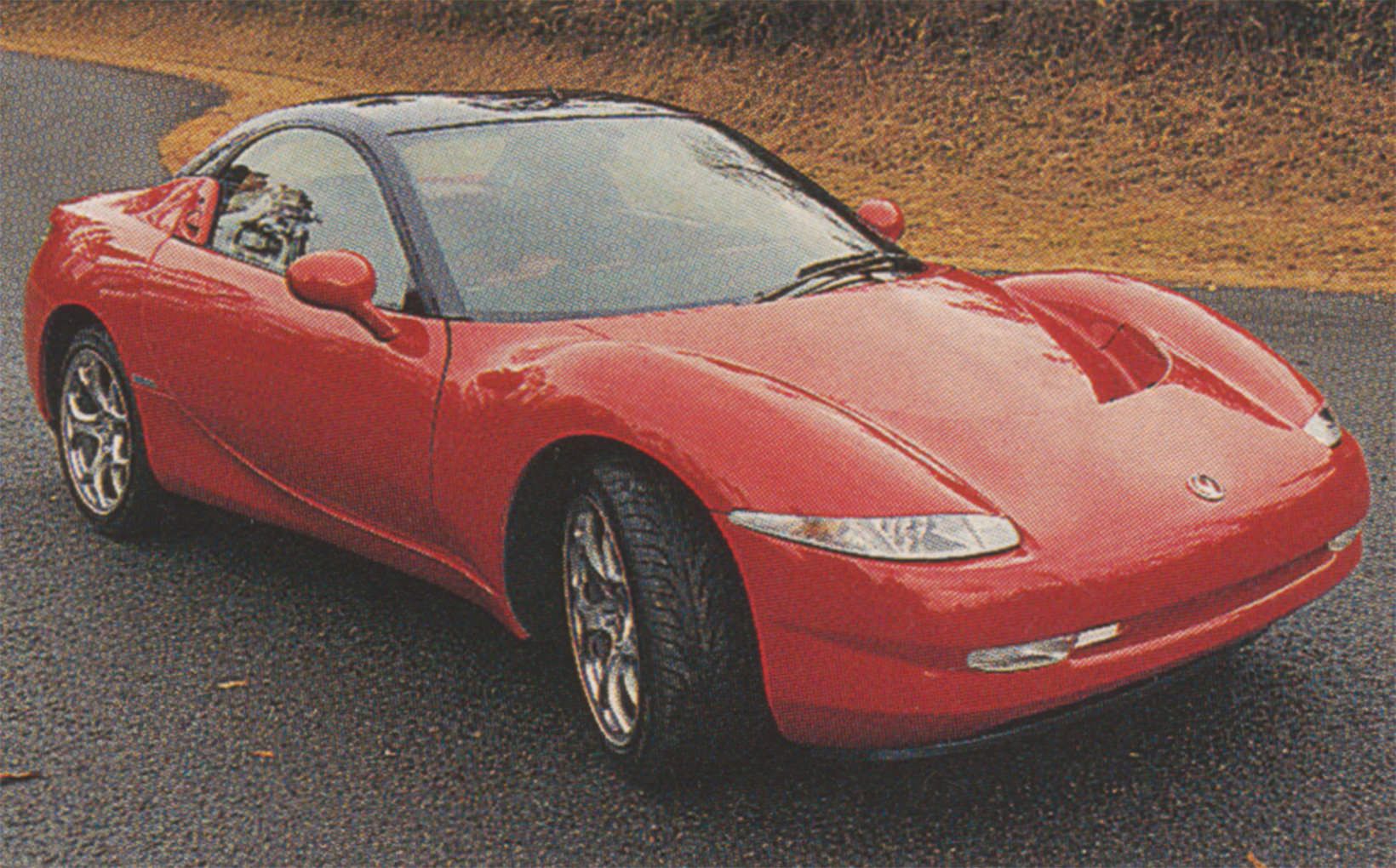 There is only one car like this on earth so please keep the speed down," say the engineers, loosening their collars. Sporadic rainfall clearly wasn't helping them to relax.

With a company test driver - a man introduced to me simply as Mr Ohta - at my side, I tum the ignition key. The RX-01's engine immediately jumps into life.

I prod the throttle a few times, spinning it ultimately to its 9500rpm redline. There's no mistaking the hum of the rotary, only in this case it has a deeper, fuller sound than usual. I place the shifter into first and cautiously creep off the line.

The five-speed manual gearbox feels solid and precise. Its short throws and overall feel remind me of the MX-S's.

At first I keep the speeds to about 70km/h, following the photo van in front of us through the twisty handling section of Mazda's Miyoshi test track.

It is immediately clear that Mazda's new rotary coupe is a car that begs to be driven hard - begging that goes sadly unrequited in the presence of Mr Ohta. 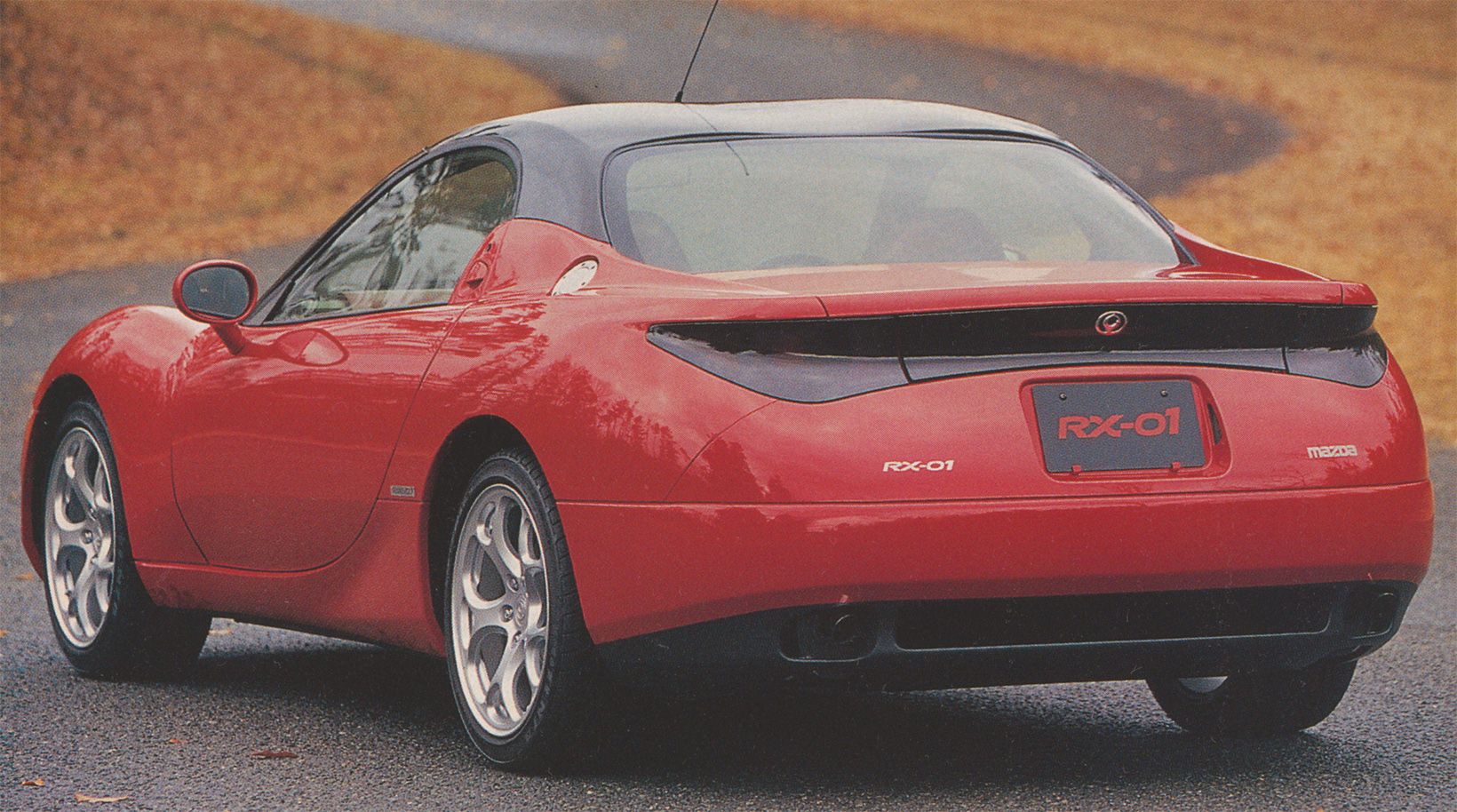 Nevertheless, I decide to tap, by minute degrees, into the car'sa potential. After each stop I push my foot deeper and deeper into the throttle pedal. Mr Ohta doesn't appear to mind so I keep pushing the envelope, always backing off when the speedo hits about 85km/h, so as not to arouse the suspicions of my companion.

Then, in an unexpected act of good futh, Mr Ohta allows me to drive the car alone for a brief time - a heaven-sent opportunity to test the car's acceleration and handling feel.

The RX-01 snaps off the line like a startled Serengeti gazelle, its acceleration smooth, steep and linear. Mazda estimates it will run to 100km/h in 5.7sec and reach the quarter mile in 14.2. After my brief stint behind the wheel, these claims seemed very believable indeed.

Turn-in feels crisp, with a slight bias towards understeer. But as the car plunges deeper into a turn, its balance improves exponentially. In mid-turn it feels perfectly neutral.

Body roll is virtually absent. The only way to break the rear loose is by stomping the throttle. Hard. 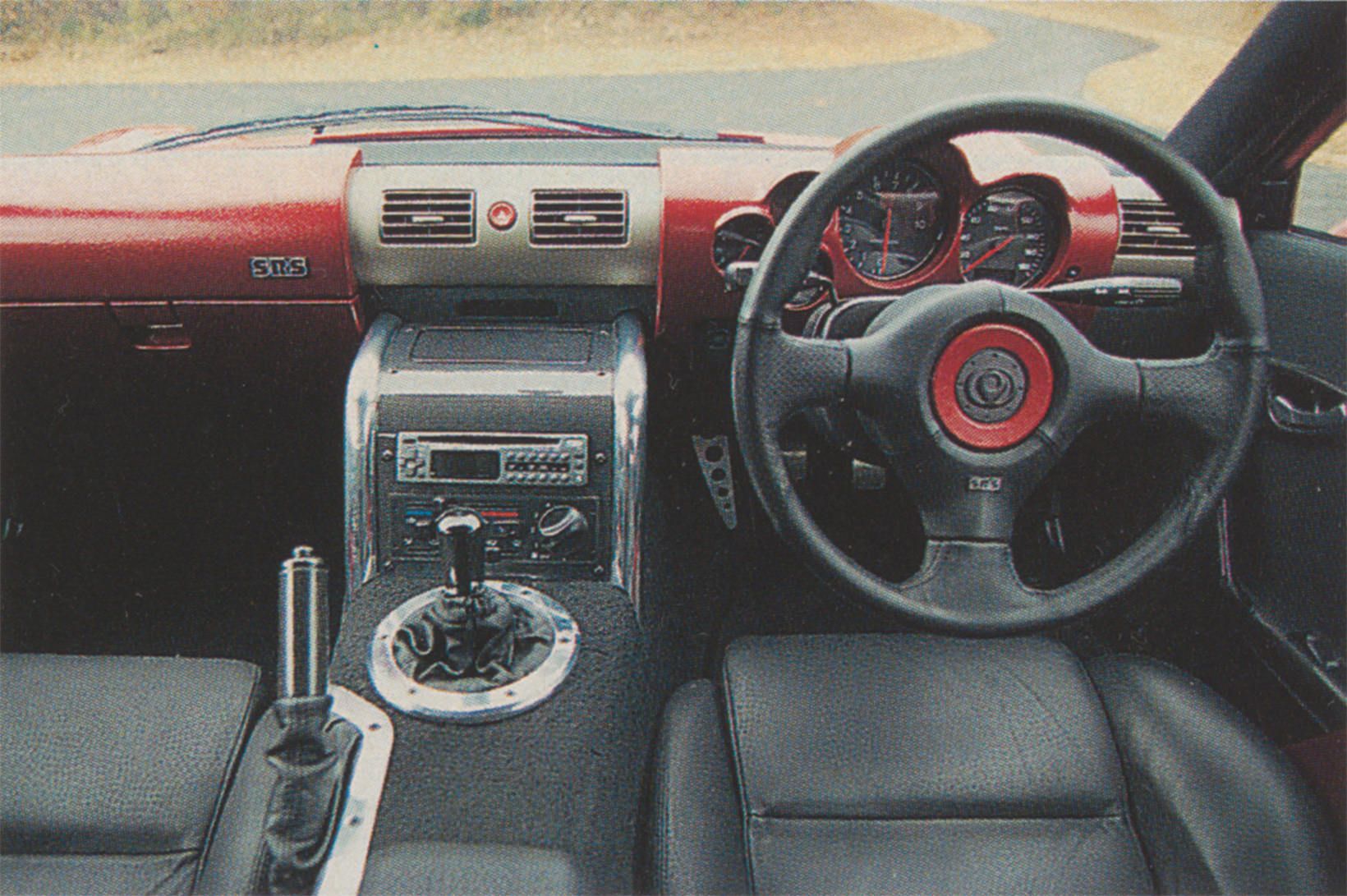 In a story by the lace Japanese novelist Keiichiro Ryu, a fierce warrior living in feudal Japan opts to live life by his own rules and refuses to follow tradition. In a time when one wrong word could cost you your life, he chose to live "as free as a drifting cloud".

In the automotive world, Mazda has been living by a similar code.

The company's tendency to fly in the face of convention began in the Sixties. While the rest of the motoring world was saying it wouldn't work, Mazda continued to refine the Wankel rotary engine, convinced it was the quintessential sports car powerplant. The company's passion for the concept still shows in its product line today.

But Mazda's maverick lifestyle has finally caught it out. The drifting cloud has become a financial storm, dark and imposing enough to threaten doom. Cars such as the current RX-7, despite being among the purest and best­handling sports cars in the market today, have all but lost their appeal to US buyers. Mazda is having to compromise to survive.

"Don't worry," insists Tadahiko Takiguchi of Mazda's product planning and R&D departments. "Although we understand that we must make changes, we have no intention of casting aside our identity.

"True, in the past we may have concentrated too much on engineering and not enough on marketing - such as with the RX-7 - but we realise now we must consider both, with equal emphasis. But Mazda will continue to produce sports cars, and it will go forward with die rotary engine.

"After all, chose are the attributes chat make Mazda Mazda."

Amid rumours of the subsequent demise of the RX-7, Takiguchi's words were confinned at the last Tokyo motor show. Mazda unveiled the RX-01, a prototype car that looked to be the heir apparent to the RX-7. Not only was it dynamic and sporty in appearance, it featured new ideas indicative of the company's new direction. 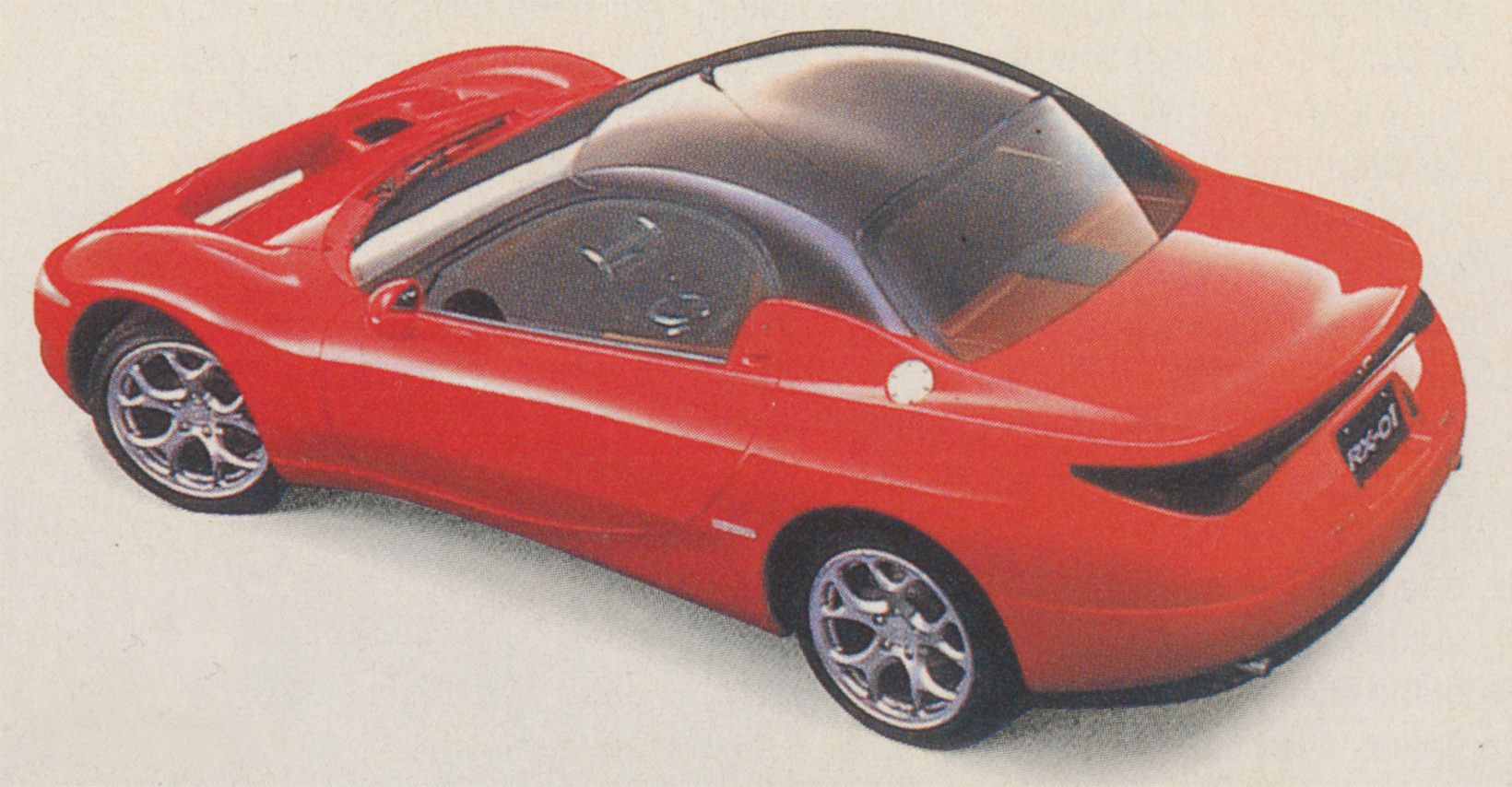 Innovation is the first word that comes to mind when attempting to describe the new RX. For starters, it's a 2+2, though the tiny rear seats serve as nothing more than a place to stow extra luggage. Although it is significantly smaller than the RX-7, there is more usable space inside. Remember, we're talking about a company that already has a couple of pure two-seaters in its line-up.

The first thing that strikes you on seeing the car for the first time is its mix of familiar and innovative styling. The RX.­Ts influence is obvious in the side and rear aspects. The doors look identical to those of the RX-7, their bottom cutline sweeping up into the C-pillar. At the rear is that familiar black tail light lens, running across the width of the body.

But there is no distinct rear spoiler. Downforce is instead provided by the car's overall shape, so as not to obscure rear Vison.

The RX-01's front end also leaves the RX-7 well behind. The front fenders are bulbous and have been integrated with flush, colour-keyed bumpers. Gone are the pop-up headlights and in their place are two slim central discharge units that are lighter and give the RX-0l's face an expression of calm intimidation.

Aside from looking aerodynamic and elegant, the centre nose cone and hood comprise one giant spoiler. Through two small openings between the tum signals, air passes under the nose piece and over the bonnet, which is angled to provide 0.50 CL downforce. The bonnet looks too low and steep to accommodate an engine. 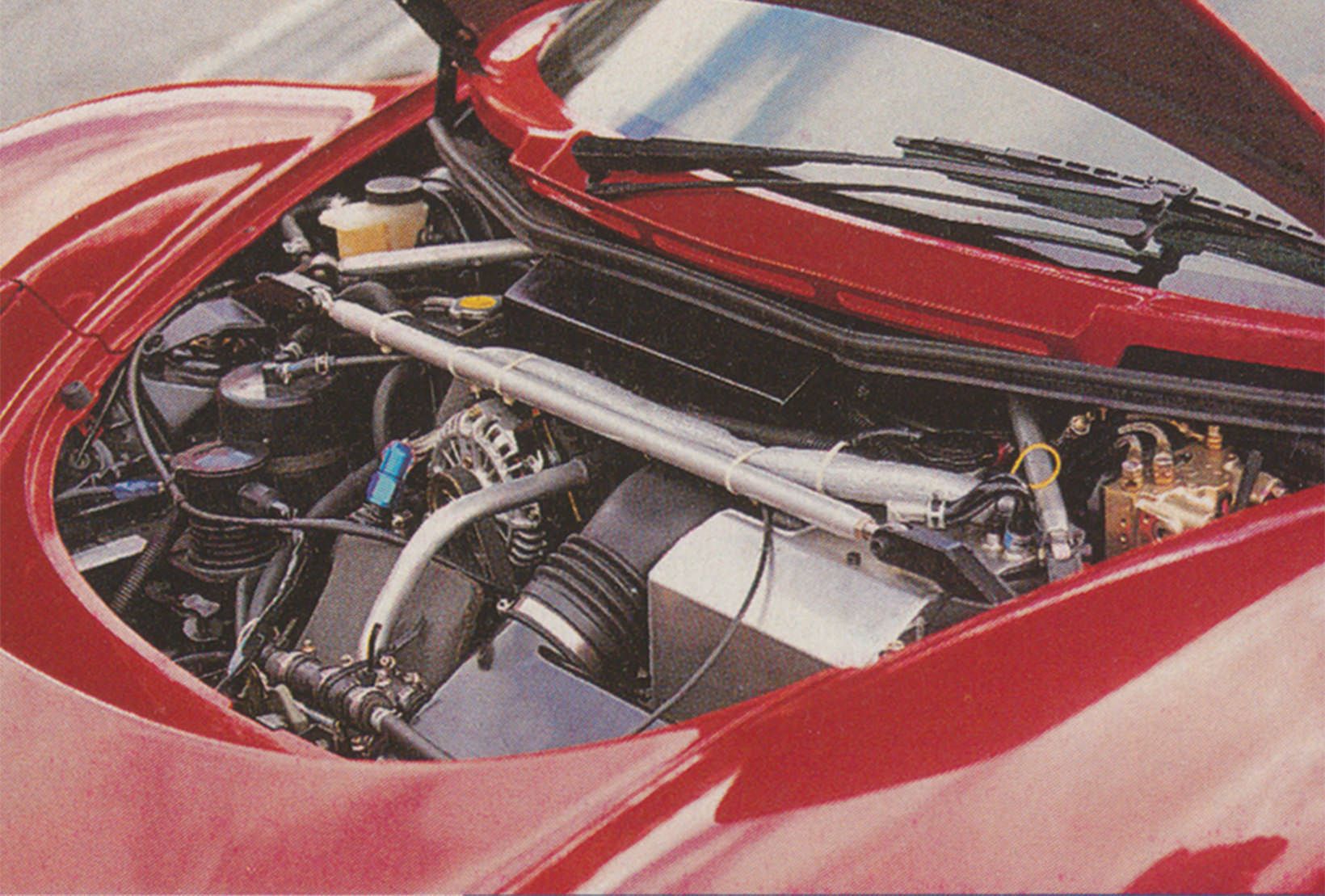 This is where the engineers took over. Beneath the RX-01 's hood is a new rotary engine based on the 13B powerplant found in the current RX-7. But the new engine, called the MSP-RE, (Multi Side Port Rotary Engine) is much more compact.

To save space, engineers converted the engine's oil­delivery system to dry sump. This eliminates the need for a large oilpan, allowing the MSP-RE to sit 56mm lower in the engine compartment. Also, by deleting the 13B's twin sequential turbochargers and changing the location of various components, the engineers found they could move the new rotary 201mm further back. Thus, the engine sits well aft of the front axle and almost directly alongside the driver's feet.

However, the most notable thing about the engine is its side exhaust ports. Mazda engineers discovered that changing the location of the rotary's exhaust ports from the periphery of the rotor housings to the side plates resulted in a significant overall efficiency increase.

The engine not only burns cleaner, but output is improved because the side exhaust location allows for 30 percent larger intake ports.

Thus, without the use of turbos, the engine produces 164kW at 8500rpm and 216Nm at 6000 (compared with the 13B's 123kW at 7000 and 191Nm at 4000, sans turbochargers). And because the new rotary engine will no longer need turbos, production of the MSP-RE will be significantly less expensive than the current RX-7 powerplant. 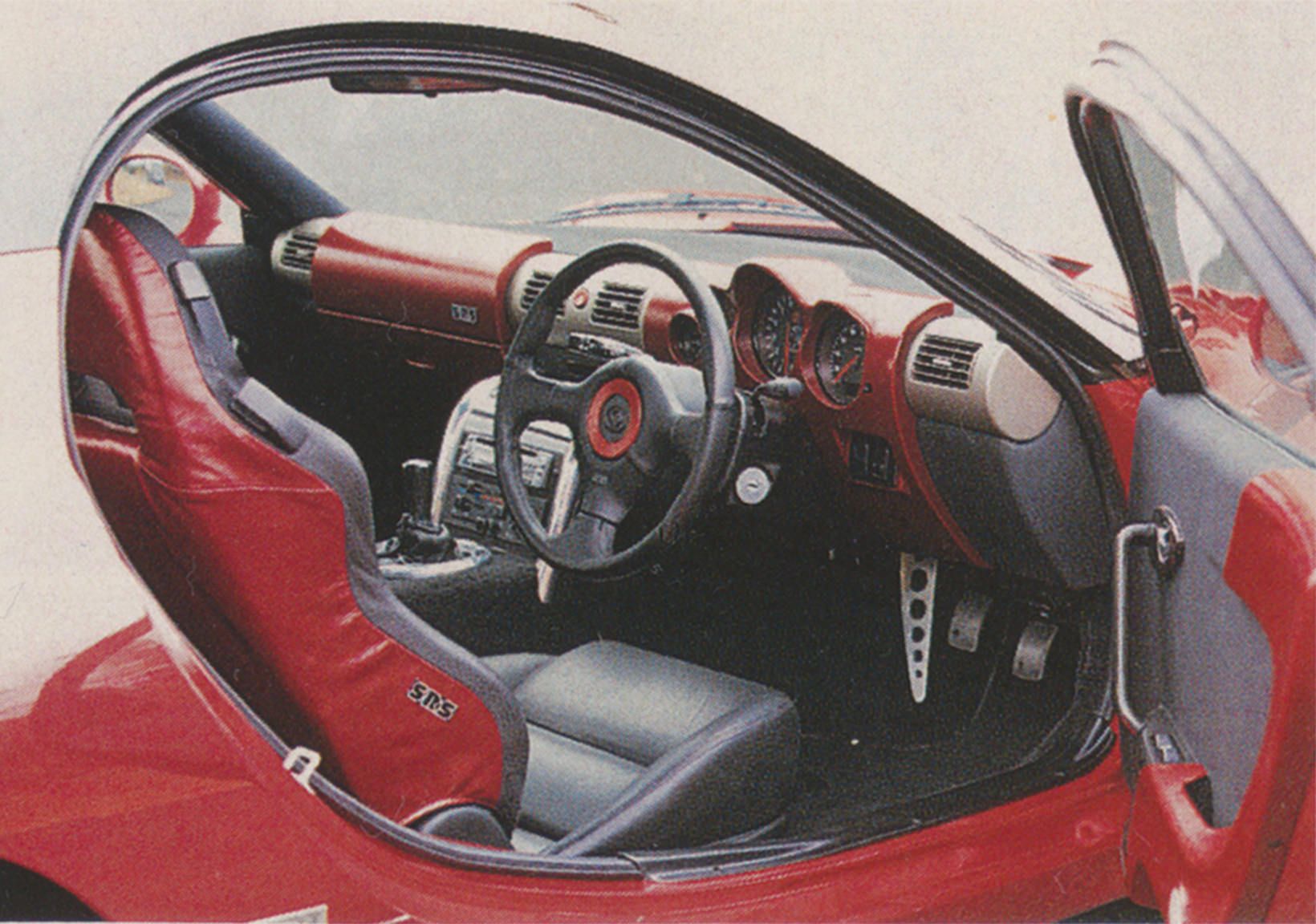 Significantly aiding its straight-line performance is a kerb weight of 1100kg, achieved mainly through the use of lightweight materials that include a carbon-fibre/fibreglass body and 17in magnesium wheels. The RX-01 's body is 80 percent stiffer than the current RX-7's, largely down to chassis configuration.

Although it uses the basic RX-7 frame, a large structural bar runs through the centre of the car, vastly increasing torsional stiffness.

The front suspension is a direct carryover from the current RX-7, but the rear - forged and pressure-cast aluminium upper and lower A-arms, coil springs, tube shocks and anti-roll bar - is new. Mazda engineers says they will soften the ride, which is currently too harsh. 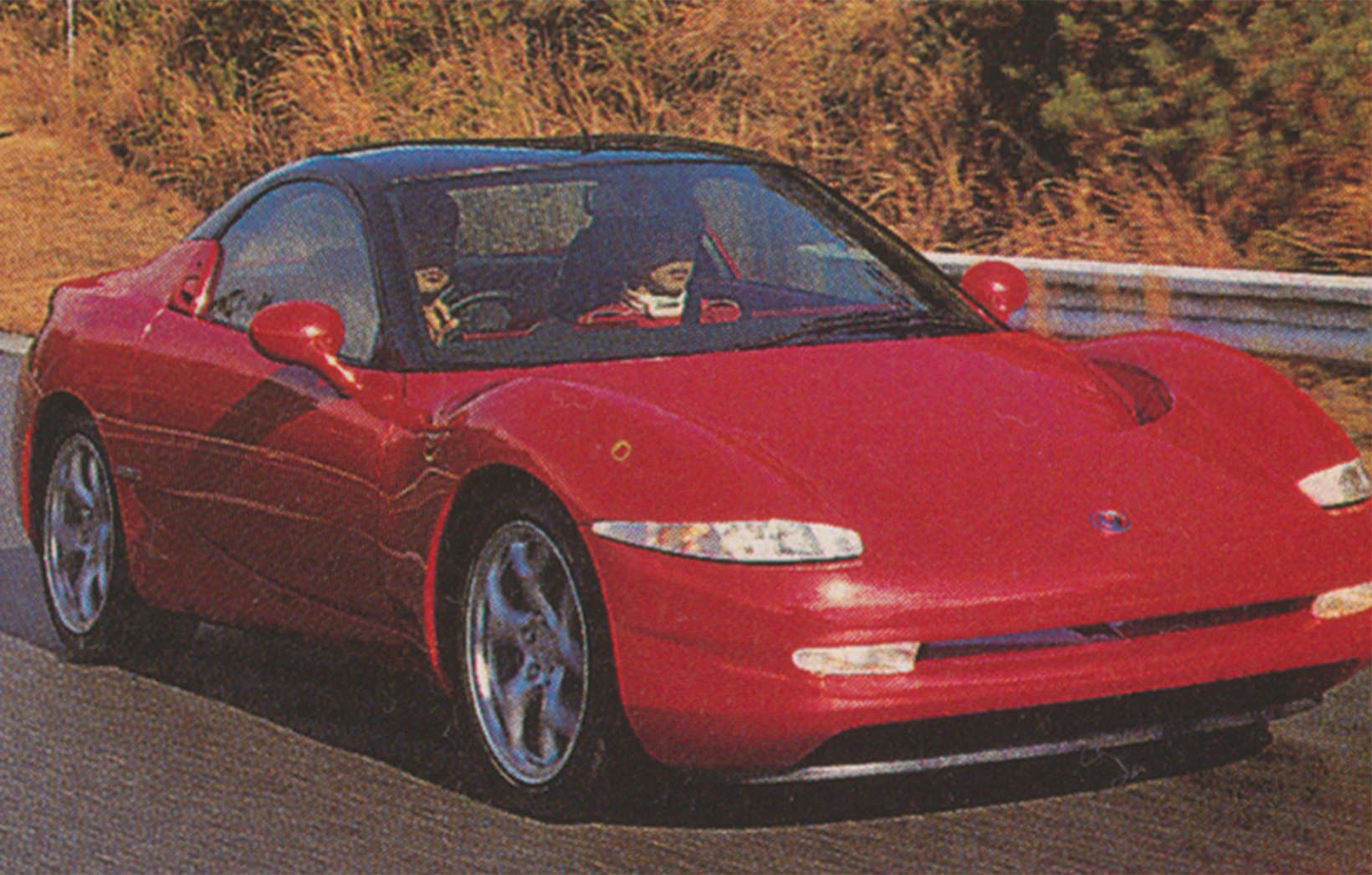 The RX-01 has a very worthwhile boot, and it gets bigger when the rear seats are folded down. But even with the seats up, the boot is deep enough to swallow a large suitcase or three overnight bags.

Perhaps the RX-01's most significant role, at least for the present, is to be a symbol of Mazda's intention to continue building exciting sports cars - and to keep perfecting the rotary engine.

Although the company realises it must drift along with the mainstream market more than it has done, it has not forsaken its image as a builder of exciting, innovative cars.

The RX-01 says that loud and clear, and hearing it pleases us no end.