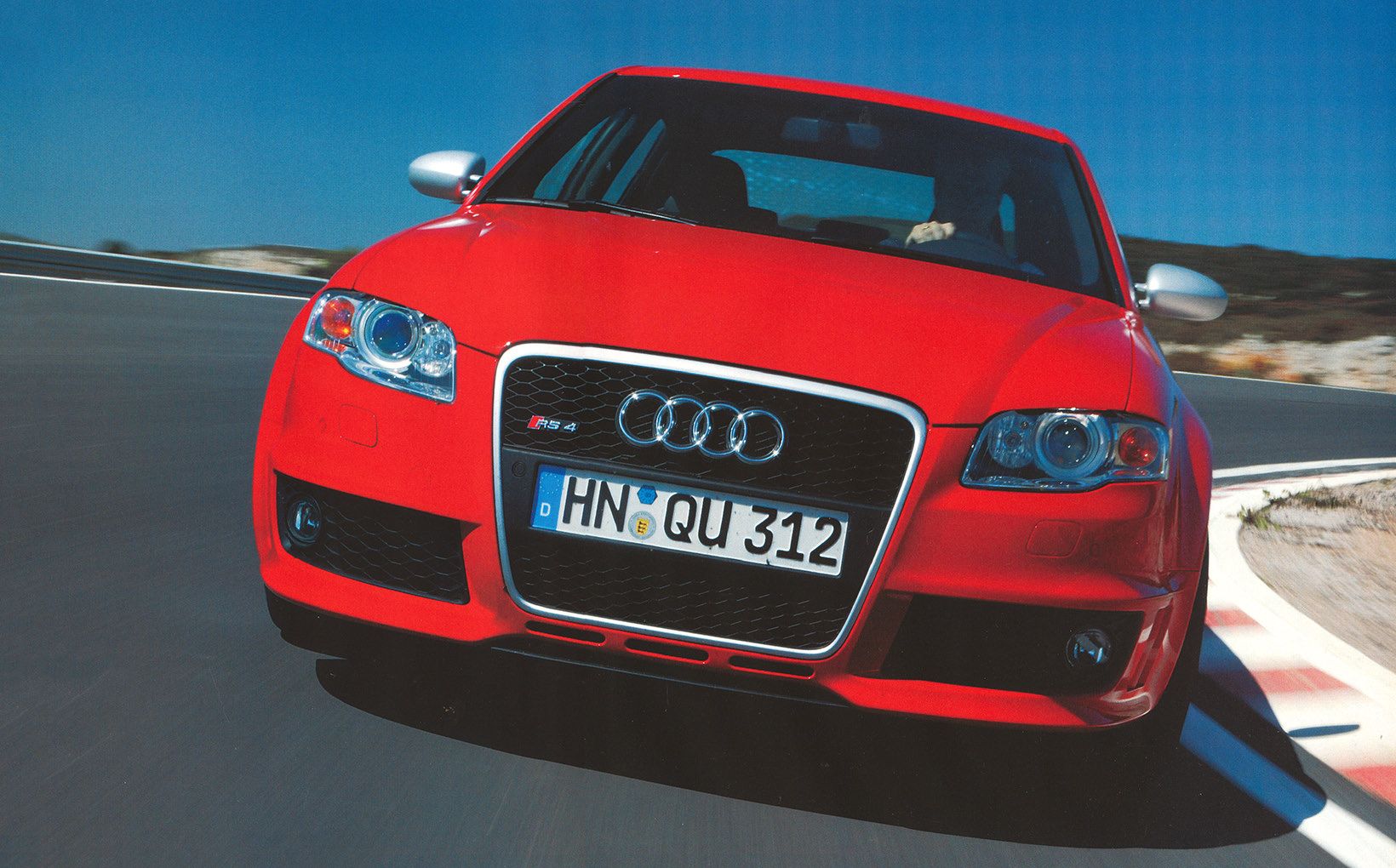 Someone at Audi has lost the plot. Or, quite possibly, recently discovered it. Having just stepped from the new RS4, we can report it’s a car as insanely fast and filled with a sheer love of life as some of the company’s other products are clinically and efficiently dull.

In how many other compact sedans would you find a direct-injections V8 capable of revving to 8250rpm, producing no less than 309kW along the way, with a drivetrain and chassis so easily able to handle the grunt? The RS4 has all that, but its quattro all-wheel-drive system has also been tuned to deliver more power to the rear wheels instead of Audi’s usual 50/50 split. And, rather than an uninvolving automatic or fiddly clutchless manual, there’s a conventional six-speed with clutch pedal. The RS4’s trick bits include lightweight panels, race style seats, and ESP and traction control systems that can be completely disengaged. Oh, and on full throttle, it bellows like a bull pissing on an electric fence. After years of promising excitement and almost delivering, first impressions suggest the RS4 is the car we’ve been waiting for from Audi.

The gents responsible for the RS4 come from quattro GmbH, which also delivered the current RS6 and the previous twin-turbo V6 RS4. Unlike that latter effort, the new RS4 has been introduced as a sedan and not a wagon, although the Avant version takes a bow in Europe mid-2006. And unlike their predecessor – the Porsche-designed and left-hand-drive-only, five-cylinder RS2 – this one is definitely heading for Oz, and is due to arrive early next year. Punters should take short odds on a sub-$150,000 pricetag. 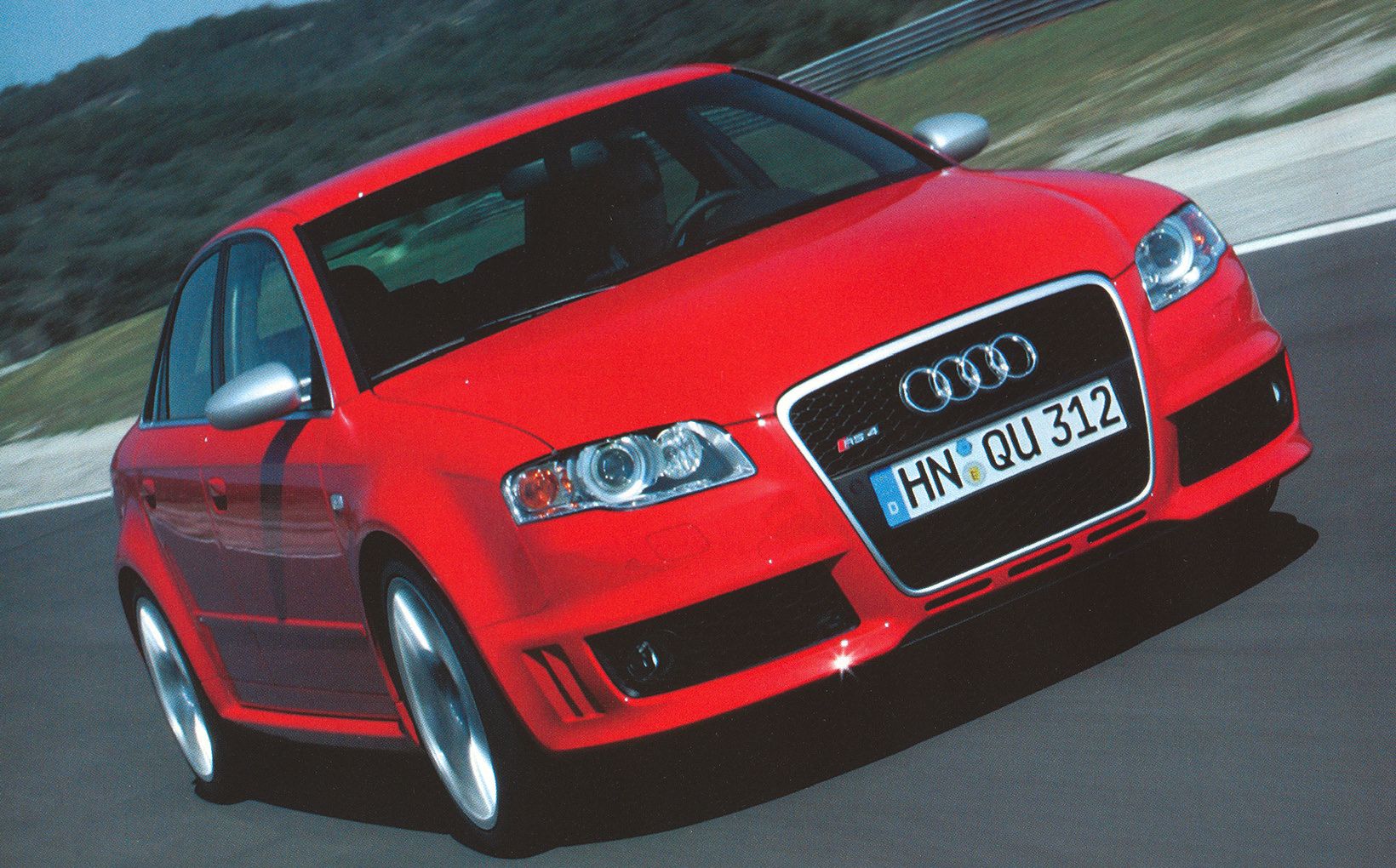 The RS4 was shown at Geneva this year, where – even while static on the plinth – the impression of a typically subdued Audi styling effort was cast. Alive in the sun, at Goodyear’s tyre-testing facility in the south of France, there much more to this car than the deep front airdam with its gaping, mesh-filled orifices and grouper-like full-frame grille. In fact, the only panels shares with the A4 are the front doors and roof: the front guards and bonnet on the RS4 are made from aluminium, and the rear doors reveal the start of the bulge that flares the wheelarches to accommodate the wider rear track. Even the rear quarter panel has a delicate kick just above the tail-lamp that becomes the subtle spoiler incorporated into the bootlid.

Heart of this car is the 4.2-litre, quad-cam V8 that is a development of the S4’s although in truth not much of the original is left. Audi calls its performance advantage the “high-rev principle”, and has used direct-injection FSI technology, together with continual phasing of inlet and exhaust-valve timing and some pretty strong bottom-end components, to combine V8 mid-range pull with an extraordinary willingness to rev.

The results are electrifying. Even without our own performance-testing equipment on this introductory drive before the RS4’s June European launch, gut feeling (and direct comparison with an S4 on the day) agrees with Audi’s claim that the uber-A4 will shave tenths off its lesser-nourished sibling.

Its V8 may well go down as one of the world’s great engines. The breadth and elasticity of its power delivery is immense, with real urge from as low as 2000rpm and an explosive, seemingly unending stream of power creating a very accessible usable top-end. It also sounds fabulous, with a distinctly V8 beat that becomes a warbling yodel higher in the rev range. Yet, despite this, at constant throttle there’s no boom from the twin system exiting below either side of the rear bumper.

More sensual overload comes from lifting the bonnet: with a red-crackle finish to the cam covers, the same in black down the centre of the engine’s vee, and a carbonfibre plenum chamber nestled back towards the firewall, the engine is as lovely to look at as it is to drive. 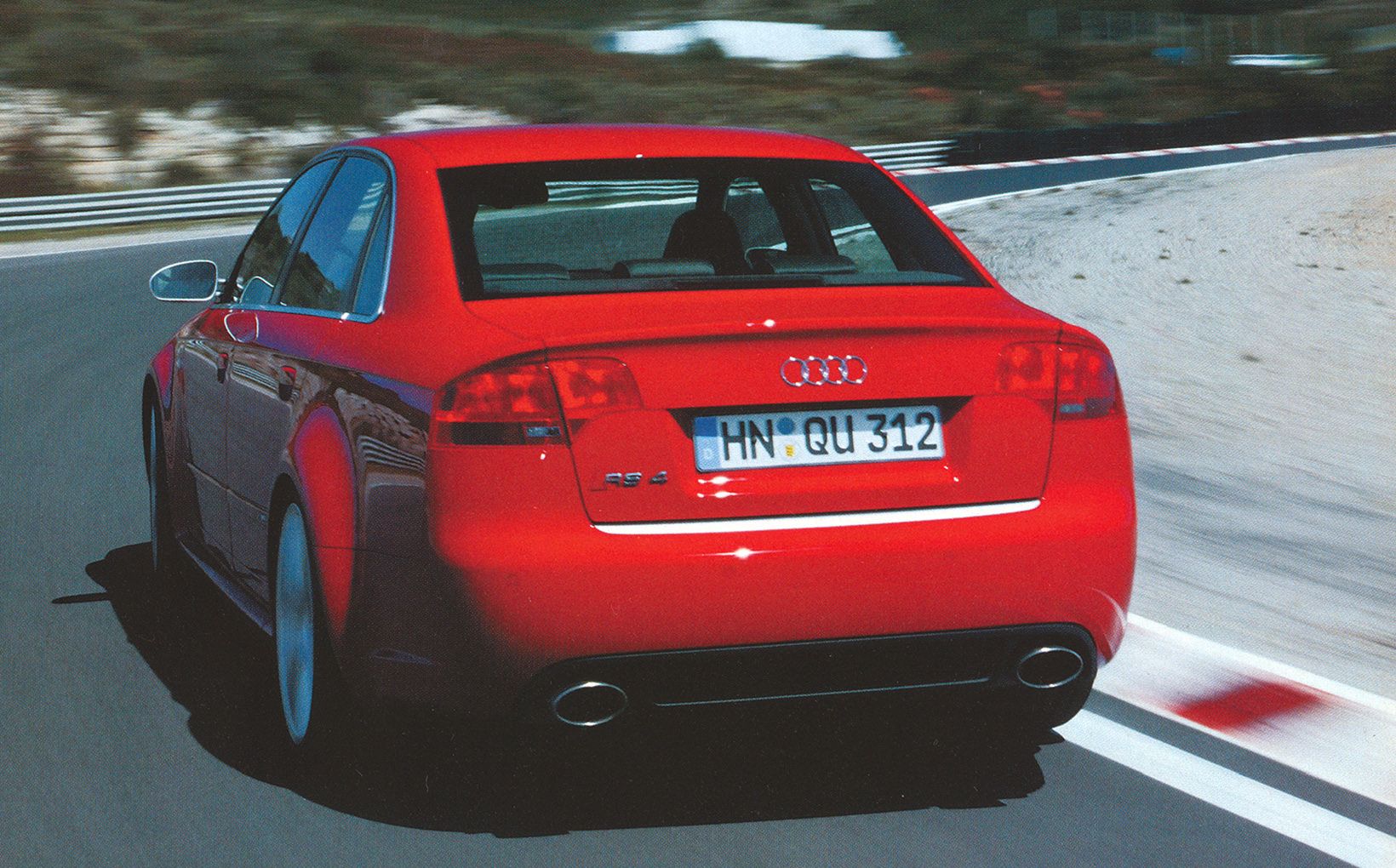 Bowl in with apporiate entry speed and the result is astonighing.

The RS4 is no lightweight at 1650kg, but neither is it as heavy as most similarly powered sedans. With 187kW for every tonne of its mass, it compares favourably with the BMW M3 and Merc C55 AMG (both around 164kW/tonne), and even the storming big-brother RS6 (180kW/tonne).

Weight saving, however, for straight-line performance wasn’t a priority for Audi’s engineers. The aluminium guards and bonnet are there to take weight off the front wheels, which have to contend with a V8 jutting forward of the axle line. The battery is also relocated to the boot to help in this regard. Still, a weight distribution of 58/42 front-to-rear doesn’t suggest anything but understeer.

But Ingolstadt’s performance arm has fitted the RS4 with a couple of fixes to take pressure off the front end. One is the DRC (dynamic ride control) system – first seen on the RS6 – that channels oil for the dampers diagonally from one corner of the car to the other through bends, aiding turn-in and limiting body roll by keeping an inside-rear tyre in play and the outside-front corner from compressing heavily.

The other is the new Torsen Z centre differential delivering a static 40/60 drive front-to-rear, or anything up to 85 percent torque delivery to the back axle depending on available levels of grip. It is one of the more significant mechanical features of the RS4, which, like any performance Audi, has the advantage of AWD traction but, in the past at least, a less-than-balanced cornering posture of one-dimensional understeer.

According to Stephan Reil, general manager for development at quattro GmbH, increasing the responsiveness of the front end, rather than appeasing potentially tail-happy drivers, was the reason for introducing Torsen Z.

“We don’t want rear-drive characteristics, because hanging out the tail in the curves is not fast,” Reil says. “The reason for changing the torque distribution from 50/50 to 40/60 was to reduce power understeer. The front wheels have to transmit the torque and the side forces for steering. If you reduce the torque, or the acceleration forces, you have more margin for side forces.”

In fact, the race track is where any past Audi performance car would trip over itself and expose some fundamental shortcomings, so this particular venue – with its mixture of second-and third-gear corners – was going to be the test. Not of ride, road noise or stereo quality, but whether the RS4 could deliver the kind of chassis response that has made the benchmark of its class, the BMW M3, so entertaining to drive. 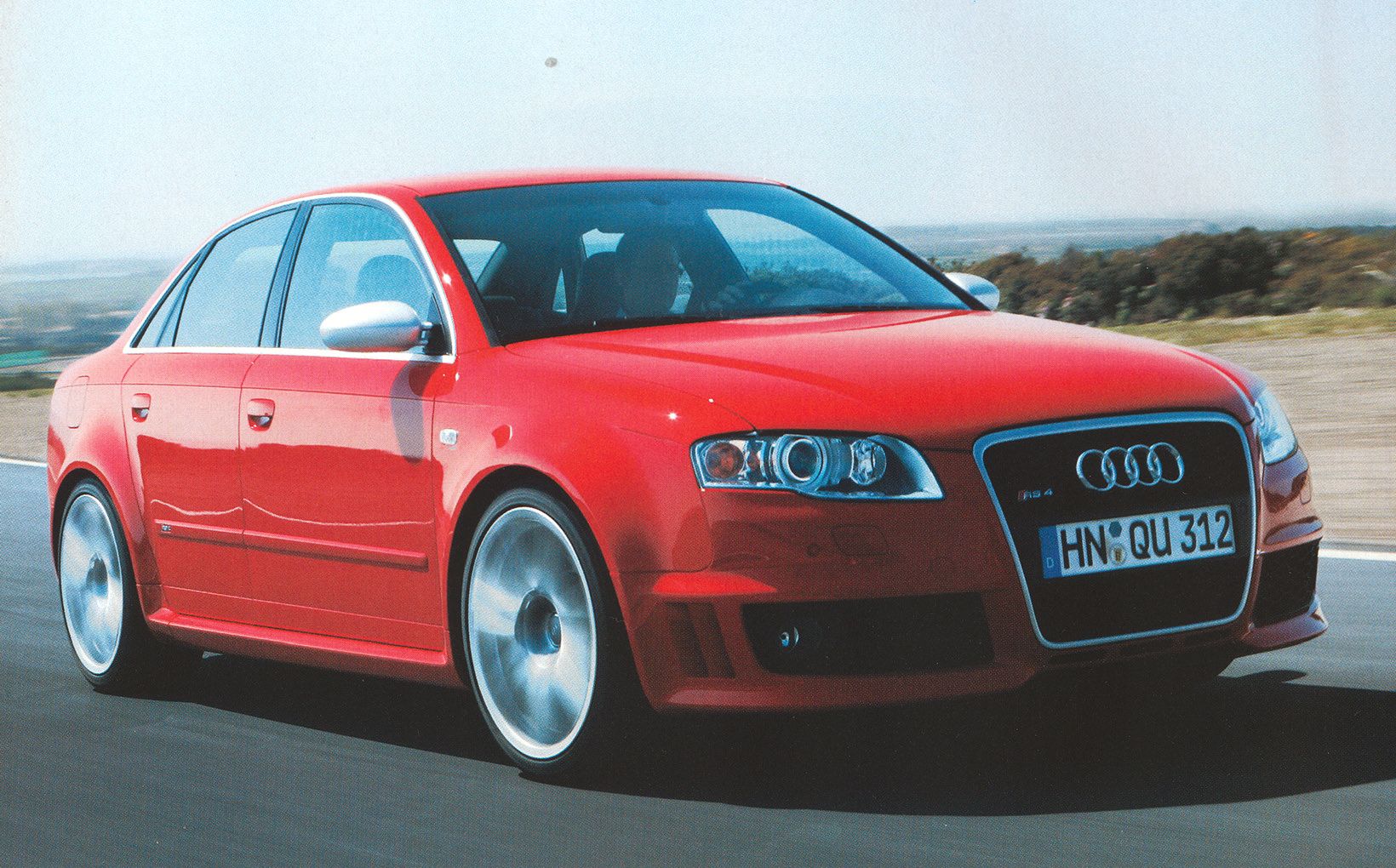 The engine sound fabulous, with a V8 beat that becomes a warbling yodel up high.

The short story is that if it’s power oversteer you’re after, no dice. Turn in and the RS4 reacts sharply enough. It will start to understeer if you push really hard, but if you bowl in with an appropriate entry speed the result is astonishing. Fitted with optional 255/35 Michelin Pilots on 19-inch rims, the RS4 has simply staggering amounts of grip at the rear, and even with the V8 bellowing and delivering its utmost while exiting a corner in second gear, there’s not a chance the rubber is going to budge laterally.

But the point is that, at this stage, the RS4 isn’t pushing wide at the front, either: it’s steering out from the apex and not asking for lift-off to tuck in the nose. An S4 driven minutes earlier on the same corner is comparatively ponderous, less responsive and far slower to pile on the power. The RS4 simply hooks up on immense traction, delivering just enough torque front and rear to both steer and deliver, then depart the scene. In a hurry.

There’s plenty more to like as well. Not forgetting that the V8 is delivering gobs of power through the range, and sounding wonderful in the process, there’s the quite fast and accurate gearshift that seems to have tall ratios until you realise the engine’s broad spread of grunt doesn’t just cope, it demands them to fully utilise the elasticity of its power delivery. The cross-drilled discs are huge and eminently capable of repeated stopping at the end of Goodyear track’s 190km/h back straight, and the steering seems well weighted and accurate – at least certainly enough to cleanly carve the tight chicanes presented on the day.

The interior is also fairly wild, and remarkably purpose-built considering there’s still plenty of A4 architecture evident. The leather seats have an enormous amount of bolstering for the backrest, while the squab has adjustable pads that further squeeze the driver’s hips and thighs. The seat bolsters can be inflated to suit the driver’s anatomy via the steering-wheel-mounted Sport button. The same button alters the electronic throttle’s map for more response.

There’s an engine-start button on the centre console that also requires the key to be turned in the ignition, but more successful is the extensive use of genuine carbonfibre on the dashboard, and aluminium trim on the flat lower edge of the steering wheel and its spokes.

It all hollers of rollicking good fun, and leaves the RS4 not only blitzing its lesser S4 sibling in a straight line, but it is also more vocal, way sharper and much nimbler.

Good enough to better an M3? For my money, very probably, with the proviso that Australian pricing and on-road behaviour and ability are yet to be determined. Yet, for the RS4 to do what it does on the track – a place littered with the carcasses of many a fast Audi’s ambitions – surely says it’s a great performance car, no matter with what it is compared. The compact-sports-sedan plot has thickened.