AT THE start of the year, Italian supercar specialist unveiled a new, high-performance version of its Huracan V10 coupe – the Evo RWD, which tied together the highest levels of Huracan performance with the driving purity of rear-wheel drive.

However, the Raging Bull brand decided a naturally aspirated V10 engine feeding power exclusively to the rear wheels would not be a sufficiently visceral experience, so its engineers took things one step further.

Enter the Huracan Evo RWD Spyder. Lamborghini says the drop-top version of the rear-drive Huracan Evo is all about “celebrating life in the open air” and provides occupants with more direct aural access to the screaming V10 engine. 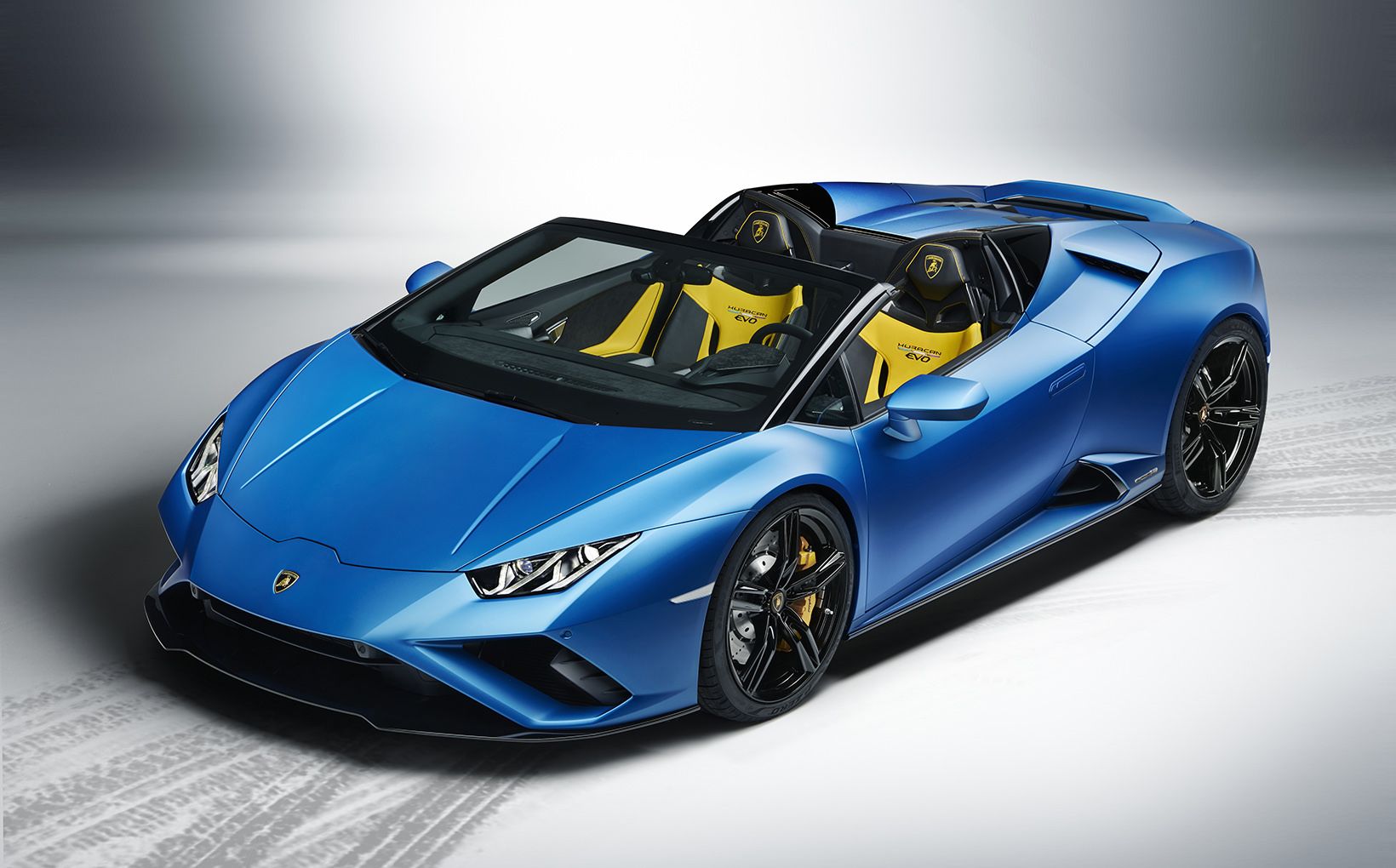 The Spyder grade largely matches the performance and specification of its hard-top sibling, headlined of course by the naturally aspirated 5.2-litre V10 petrol engine shared by Audi’s R8 supercar.

Tuned to a higher level of performance to the ‘regular’ rear-drive Huracan, the Evo punches out a fearsome 449kW/560Nm, which is 23kW/20Nm clear of the Huracan LP580-2, but 21kW/40Nm shy of the all-paw Huracan Evo – the most potent iteration of the V10 engine.

Of course, power is channelled to the rear wheels via a seven-speed dual-clutch automatic transmission, which helps the Evo RWD Spyder race from standstill to 100km/h in 3.5 seconds, on the way to terminal velocity of 324km/h. Make sure your toupee is securely tied down for this one! 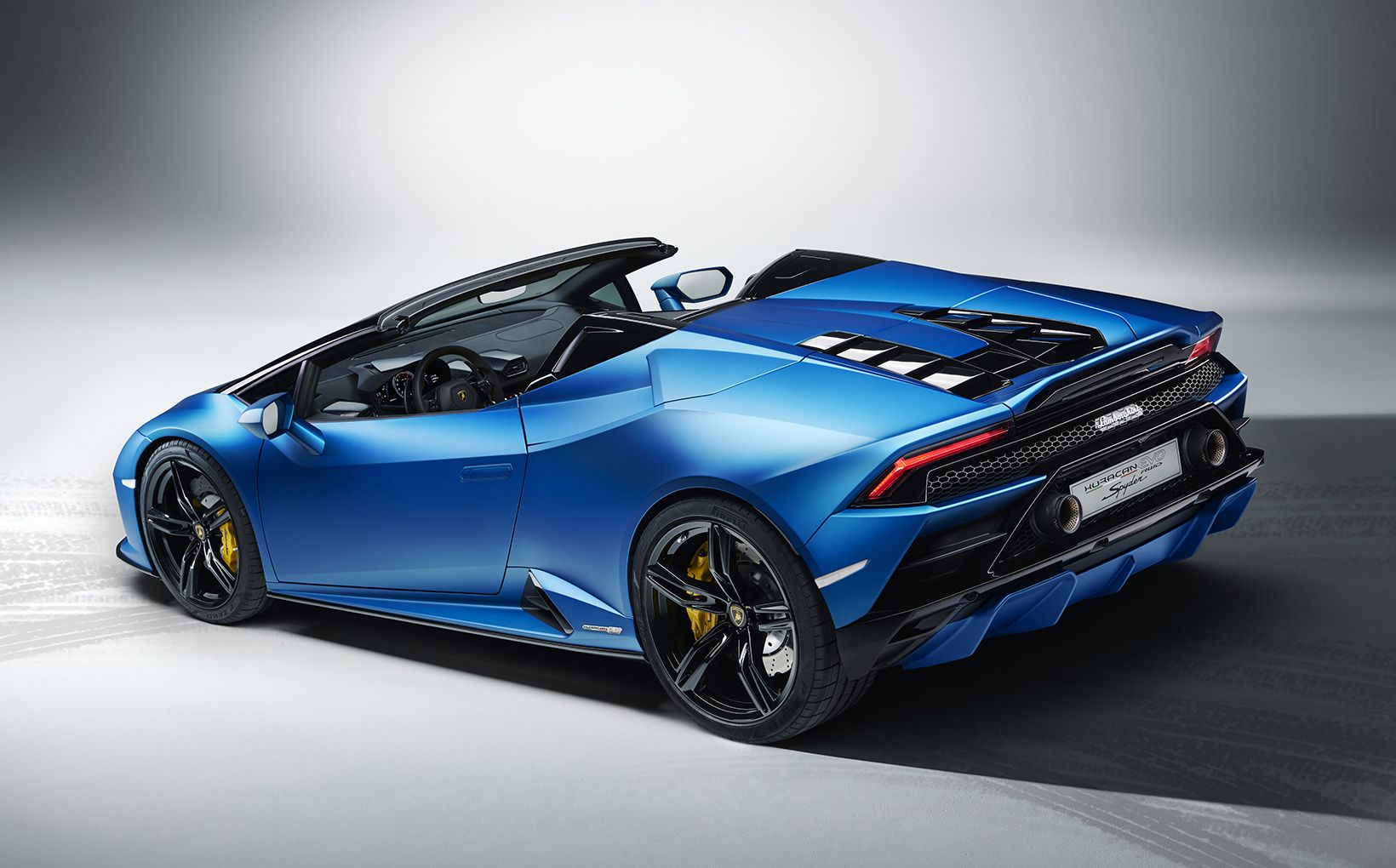 The soft-top roof can be opened or closed in 17 seconds at speeds of up to 50km/h.

Carrying a 120kg weight penalty over the coupe, the Spyder is 0.2s slower to the triple-figure landmark and trails the AWD Evo by 0.6s.

The weight penalty comes from the extra body stiffening and folding roof mechanism, which can be stowed and raised in 17 seconds at speeds of up to 50km/h.

Aside from the clearly distinguishable roof, the Evo RWD Spyder is also clearly set apart by a number of unique visual styling cues, such as a new front splitter, bigger front air intakes with vertical fins and a new rear diffuser. 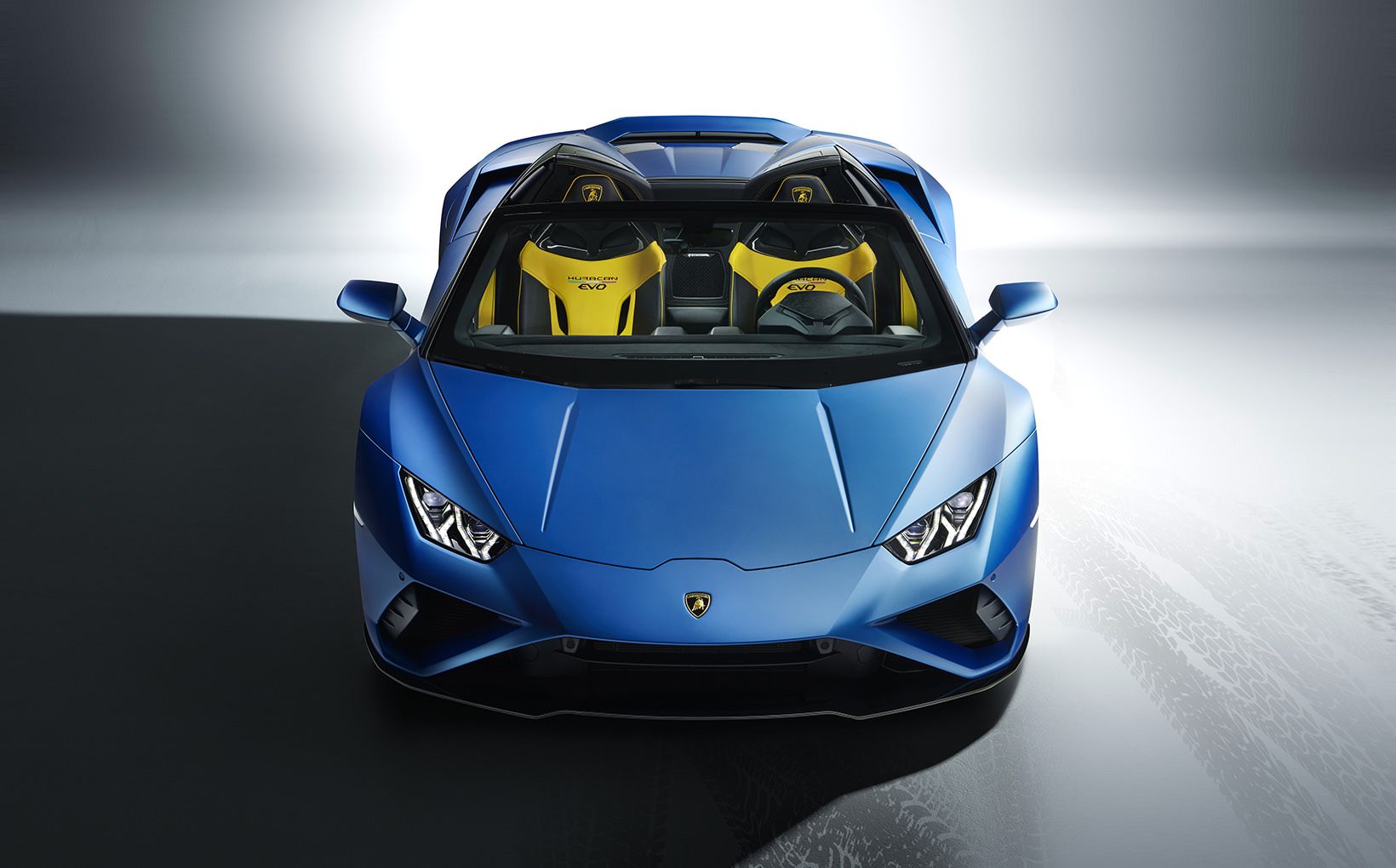 A number of exterior enhancements are unique to the Evo RWD Spyder.

Hiding behind the wheels are bright yellow brake callipers, which in the AWD Evo coupe help bring the car from 100km/h to standstill in 31.9 metres.

A number of Evo-specific features help increase dynamism and agility, including rear-wheel steering which turns the rear wheels against the front at low speeds to increase agility, and turns in the same direction at the front for greater stability at high speeds. 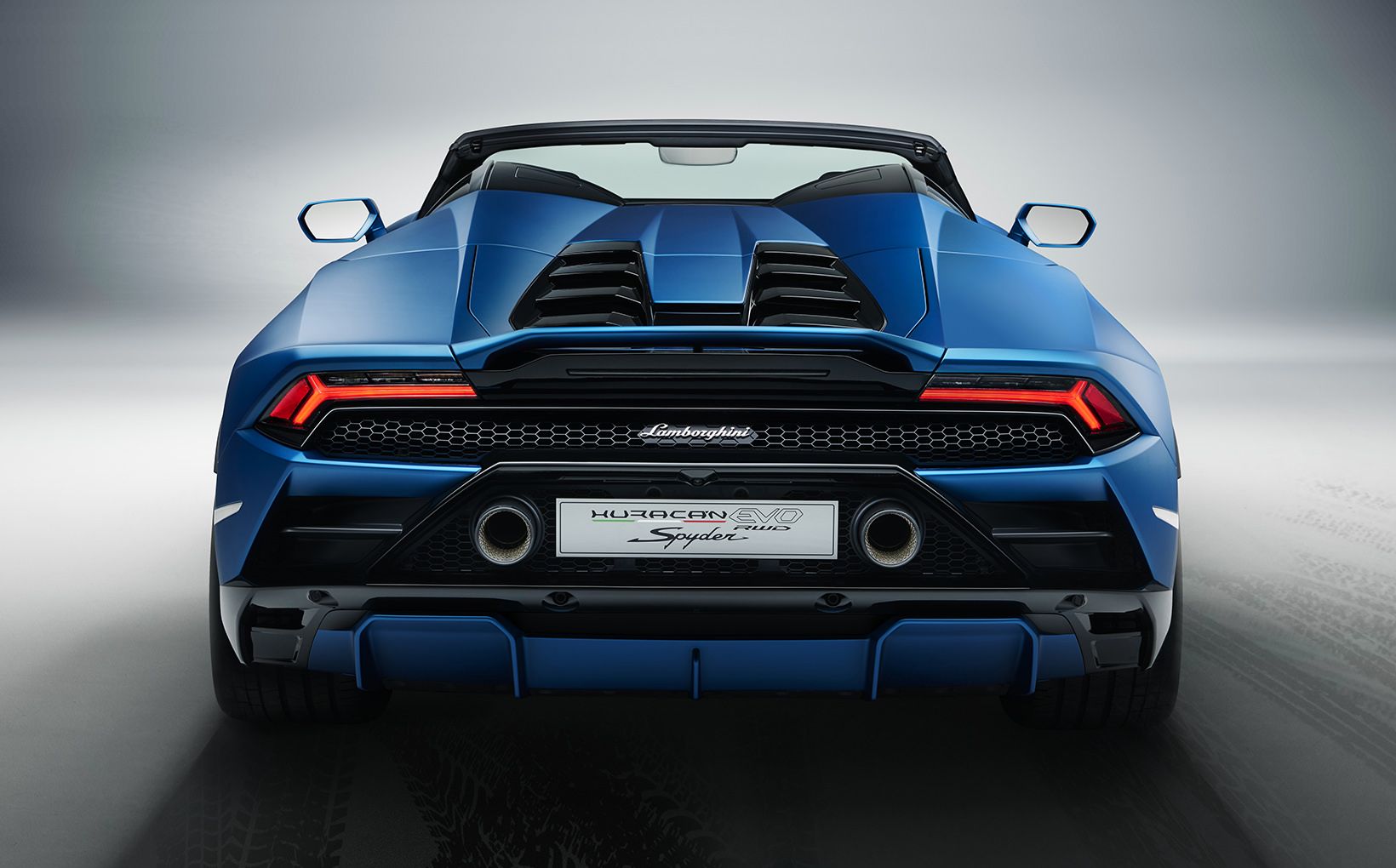 Lamborghini Dynamic Steering uses the rear-wheel steering to allow greater responsiveness through corners, while the Lamborghini Piattaforma Interziale (LPI) system makes use of a suite of gyroscopes and accelerators to constantly gauge the car’s dynamic abilities and work with the car’s adaptive damping system to ensure racecar-like abilities in the twisty stuff.

The car’s dynamic systems have been tweaked for rear-drive variants to allow a less intrusive traction control system – in other words, more oversteer and tyre smoke.

An electronic locking differential is mounted to the rear axle to help distribute the mountains of power coming down the driveline, while three drive modes – Strada, Sport and Corsa – are on tap. 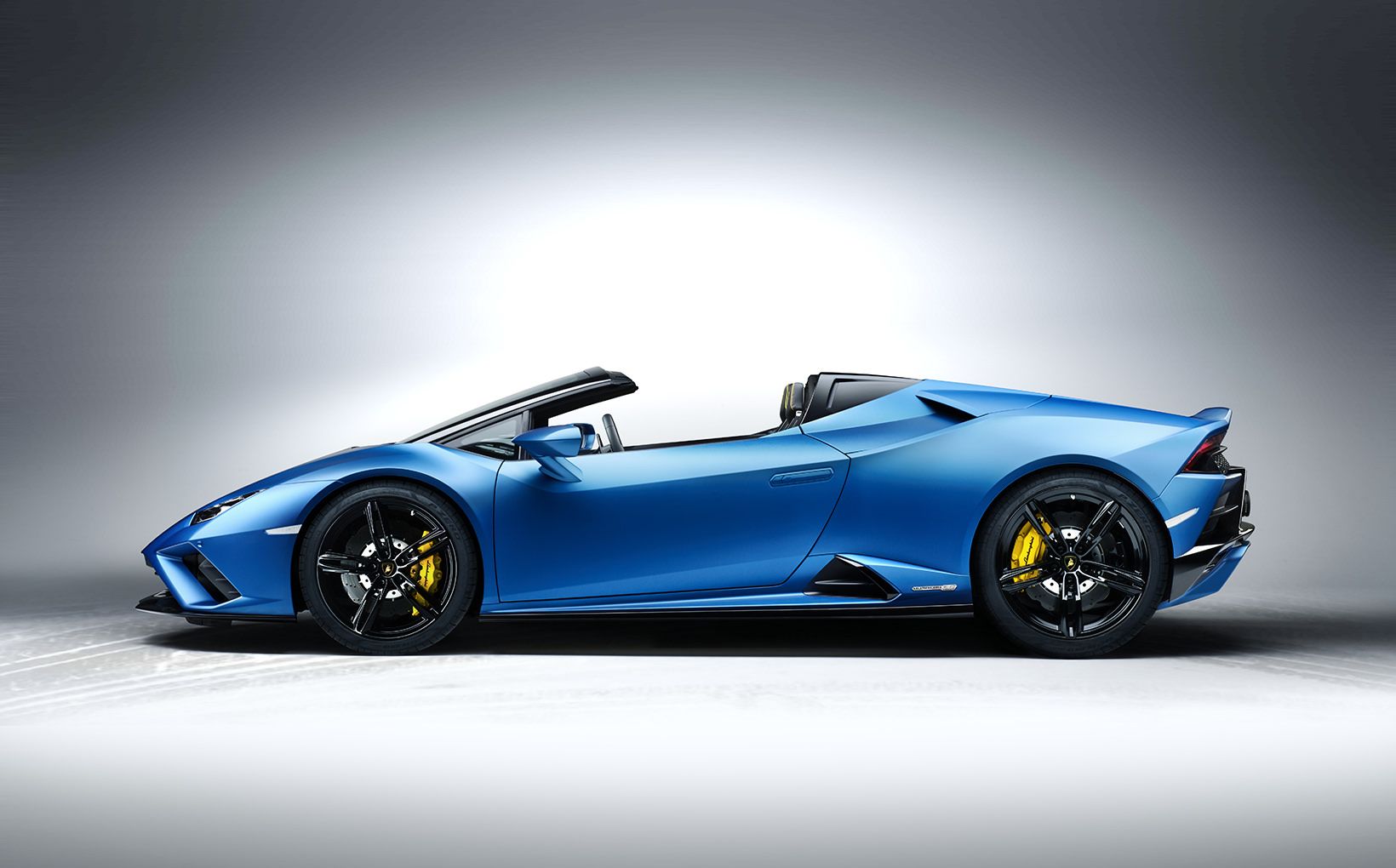 A number of traction control systems are fitted to make the Evo RWD Spyder as playful as possible in through corners.

Upholstery comes from a mix of yellow-dyed leather and Alcantara, while Lamborghini will provide a number of options inside and out for the buyer who really wants to stand out from the crowd.

Lamborghini CEO Stefano Domenicali said the Evo RWD Spyder would provide a visceral driving experience like no other. 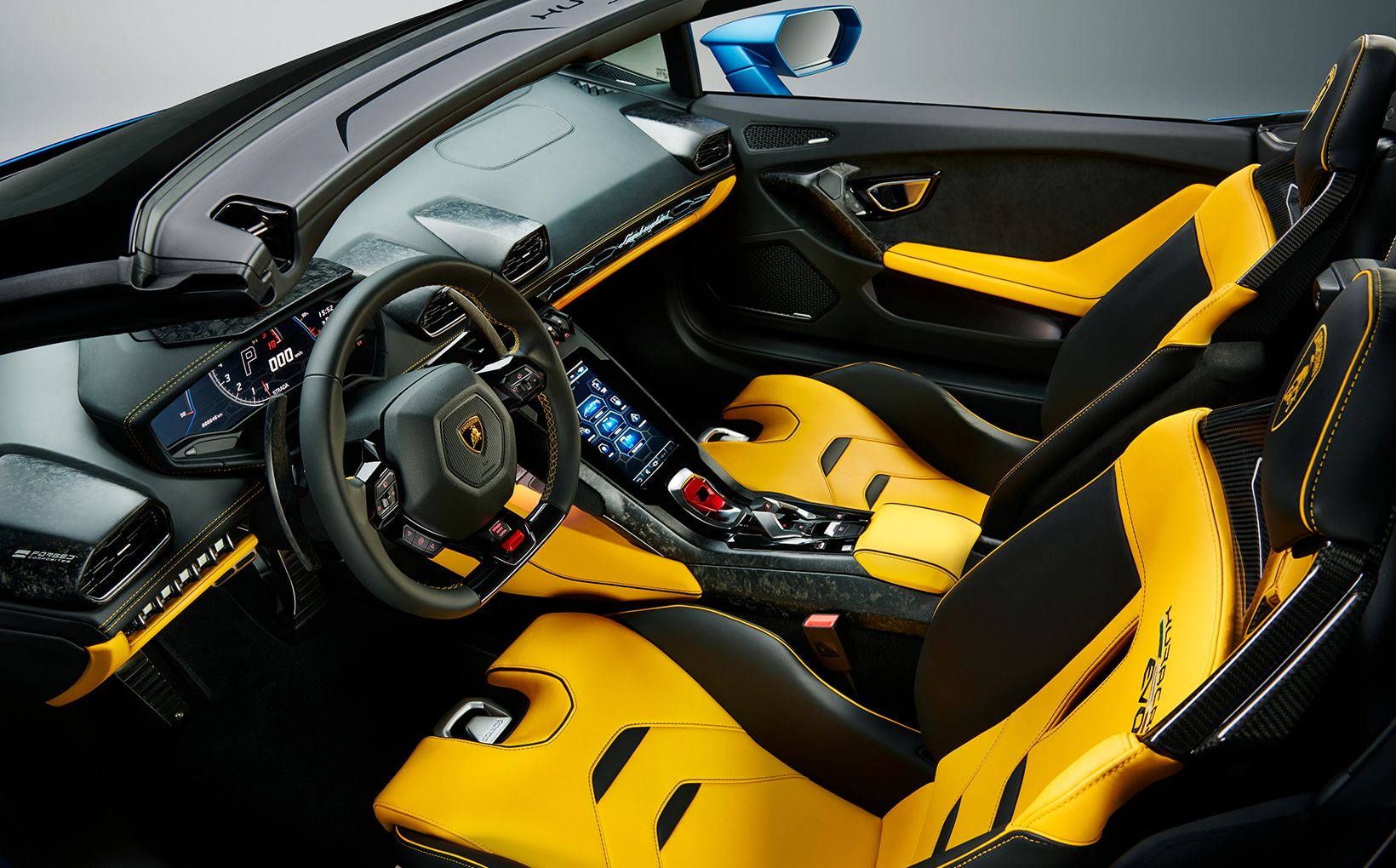 The interior of the Evo RWD Spyder is just as loud and eye-catching as the exterior.

“The driver is perfectly in touch with Lamborghini’s engineering heritage, experiencing the feedback and engagement from the set-up of a rear-wheel-drive car where electronic intrusion is minimised, while enjoying the sense of freedom and spirit of life that only open-top driving provides,” he said.

Local pricing, specification and availability is yet to be announced, however buyers can likely expect a pricetag somewhere in the $450,000-$500,000 range. Better start saving those pennies!

The Huracan Evo name first surfaced at the start of last year with the Huracan Evo AWD, which borrowed the same engine tune from the Nurburgring record-setting Huracan Performante. 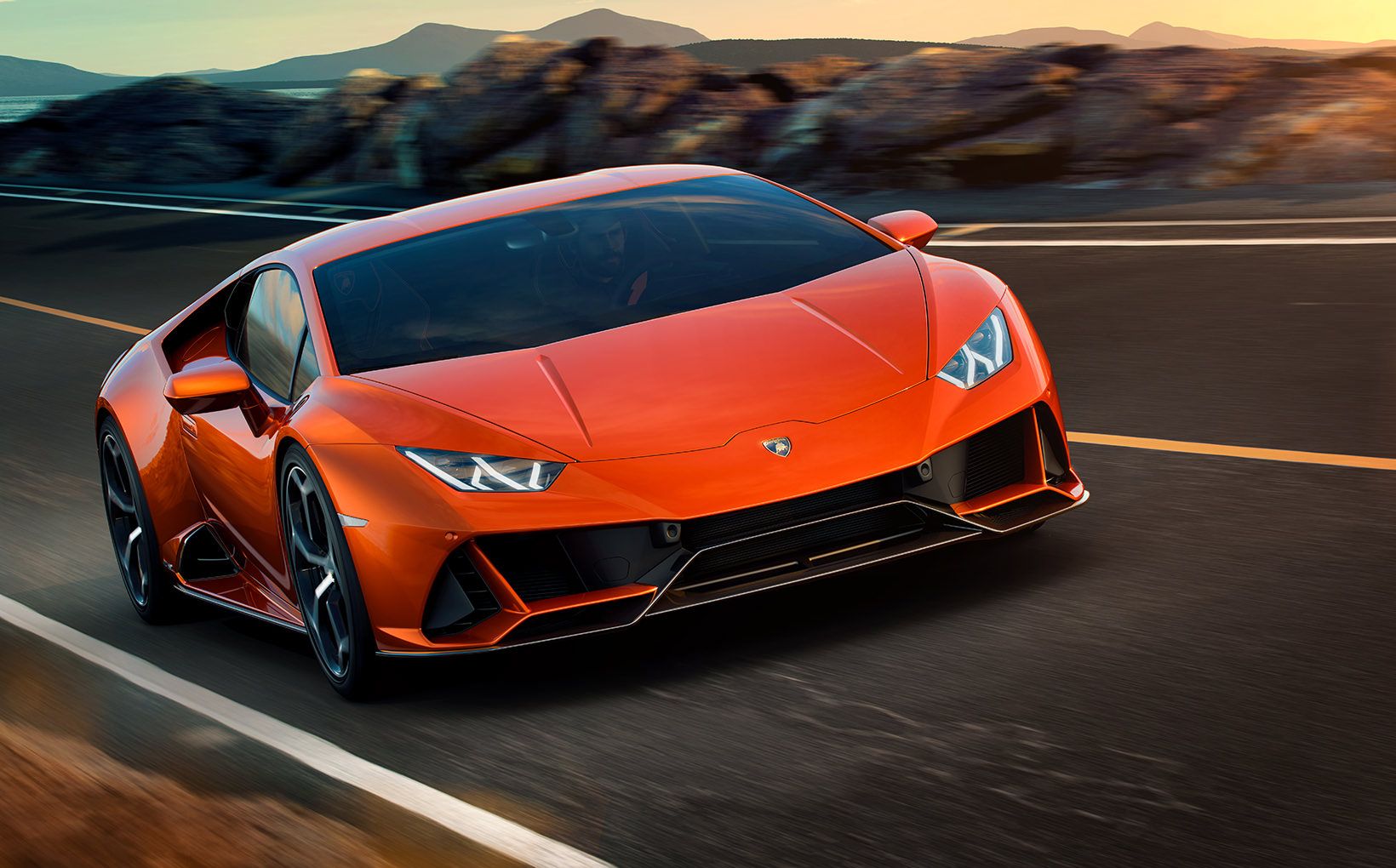 The Evo nameplate can now be had in rear-and all-wheel-drive guises, as well as with the choice of hard or soft tops – one each for the family mansion, beach house, hobby farm and ski lodge. Perfect!

Protect your Lamborghini. Call Shannons Insurance on 13 46 46 to get a quote today.