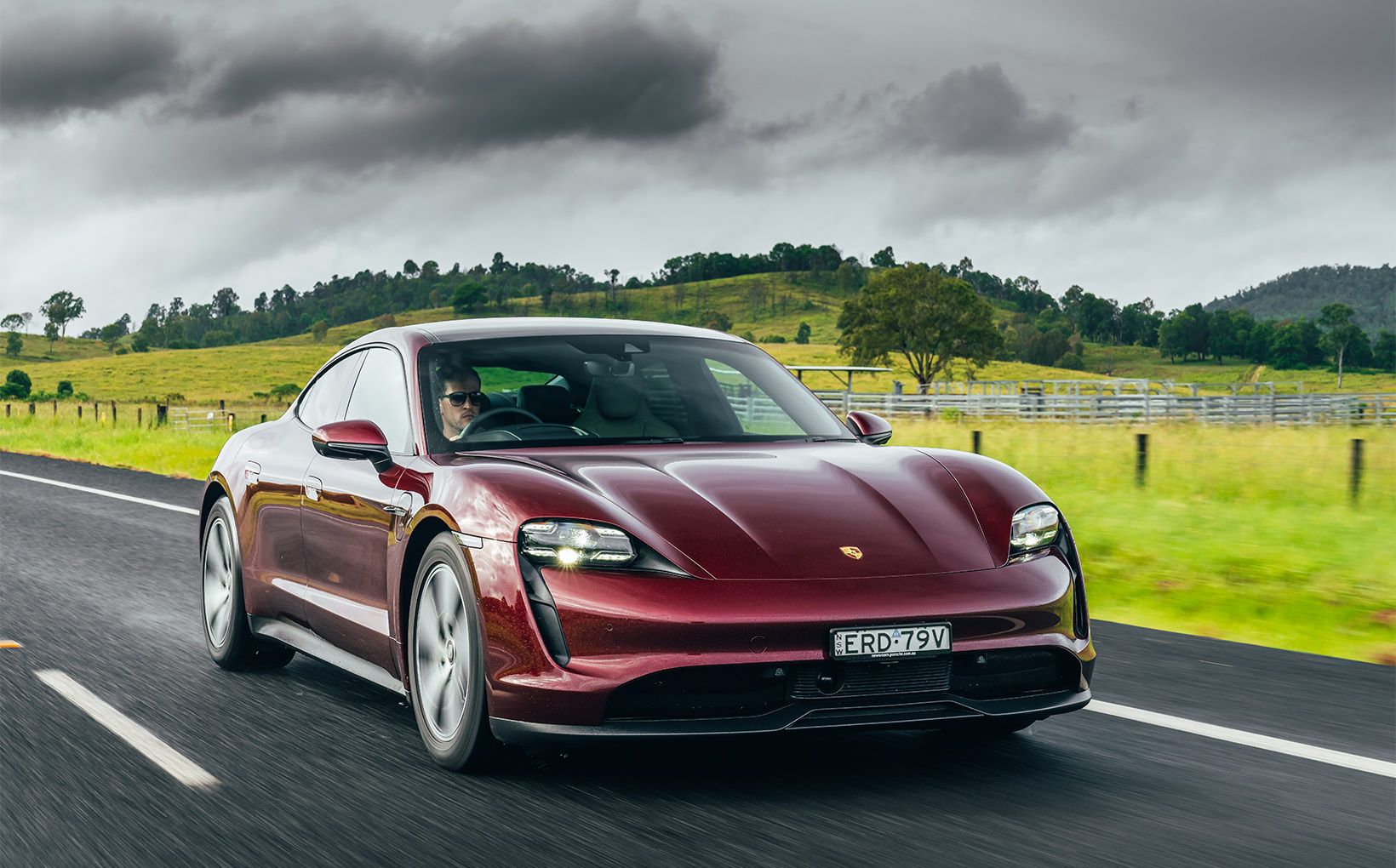 Slung lower than a Panamera and flaunting the familiar fastback profile of a 911 and Cayman – yet with two doorhandles on each side – the Taycan is literally a Porsche like no other before you even spy the lack of tailpipes and presence of a charge port, and while bystanders won’t blink at a 911 these days the Taycan prompts double-takes.

Since going on sale in 2021, over 749 Taycans, Porsche’s first pure EV, have left the company’s Aussie showrooms.

However, the majority of those have been the big-dollar all-wheel drive variants – the 4S, GTS, Turbo, Turbo S and Cross Turismo – as the dual-motor, all-paw driveline was the default from launch. Now, however, the range has expanded, and the price of entry moved downward with the arrival of the Taycan Rear Wheel Drive (or simply ‘Taycan’, if you ask Porsche).

The rear-drive Taycan opens the range at $156,300 before on-roads, giving it a $20,300 price advantage against the Taycan 4 Cross Turismo.

Naturally, performance takes a haircut: the RWD makes 300kW and 357Nm on overboost (ordinarily, it’s just 240kW/345Nm) relative to the 350kW overboost figure of the Taycan 4 Cross Turismo and 390kW of the 4S. 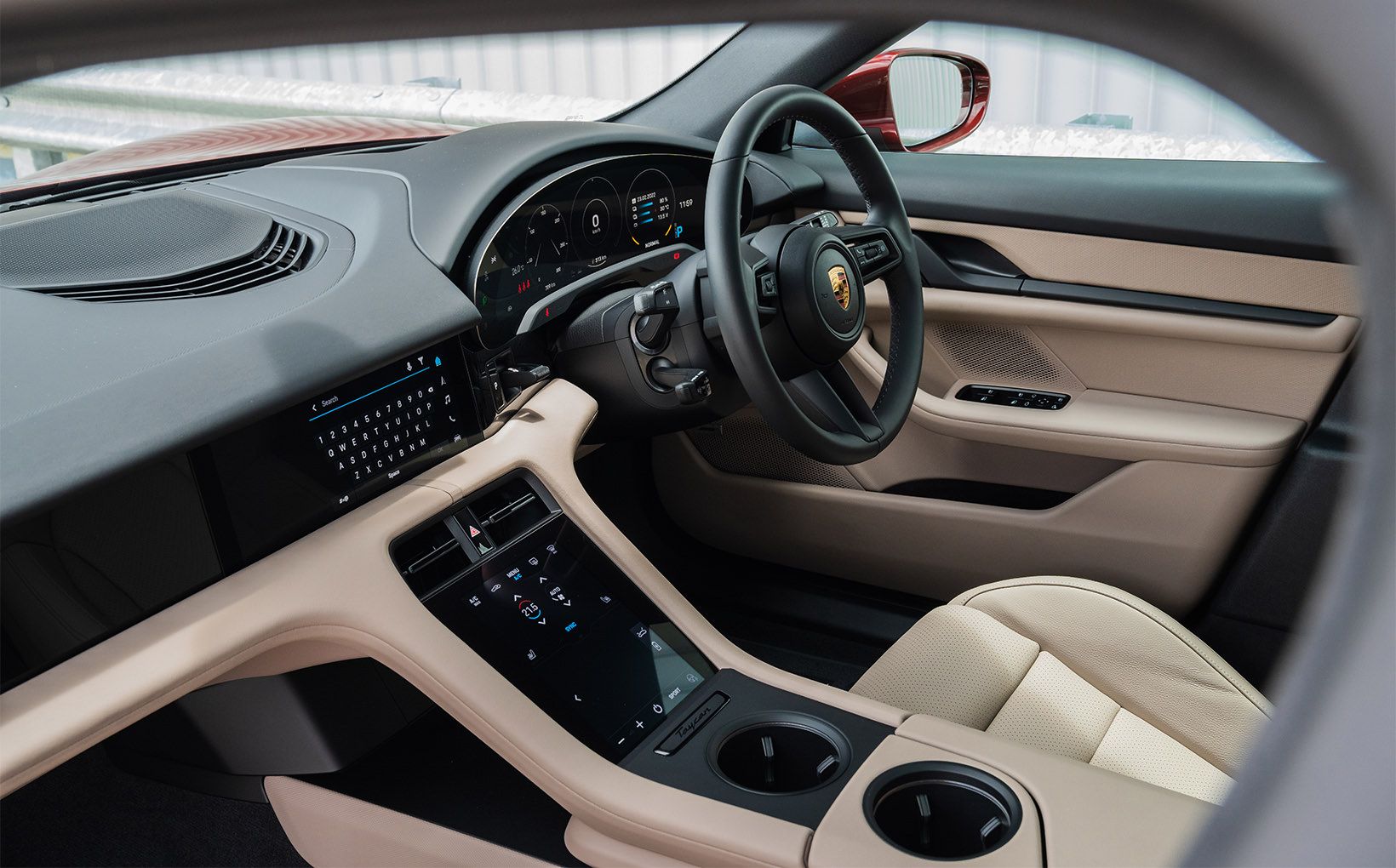 As stylish as it is, the Taycan packs a 300kW punch that’s also hard to ignore.

With the Performance Battery Plus option that number rises to 350kW for the Taycan RWD, but it’s still a long distance from the 560kW of the Taycan Turbo S flagship.

With just one motor driving the rear wheels, the Taycan RWD lodges a respectable 5.4-second 0-100km/h sprint – not especially fast in this day and age, particularly for a performance EV, but certainly not slow either.

Consider the fact that the aforementioned Taycan 4 Cross Turismo only trims 0.3 seconds off that number yet costs $20K more, and the RWD’s performance-per-dollar quotient doesn’t seem too shabby after all. Sure, the Turbo S monsters everything with a 2.8 second zero-to-hundred time, but at $345,800 it wears a monstrous price tag too. 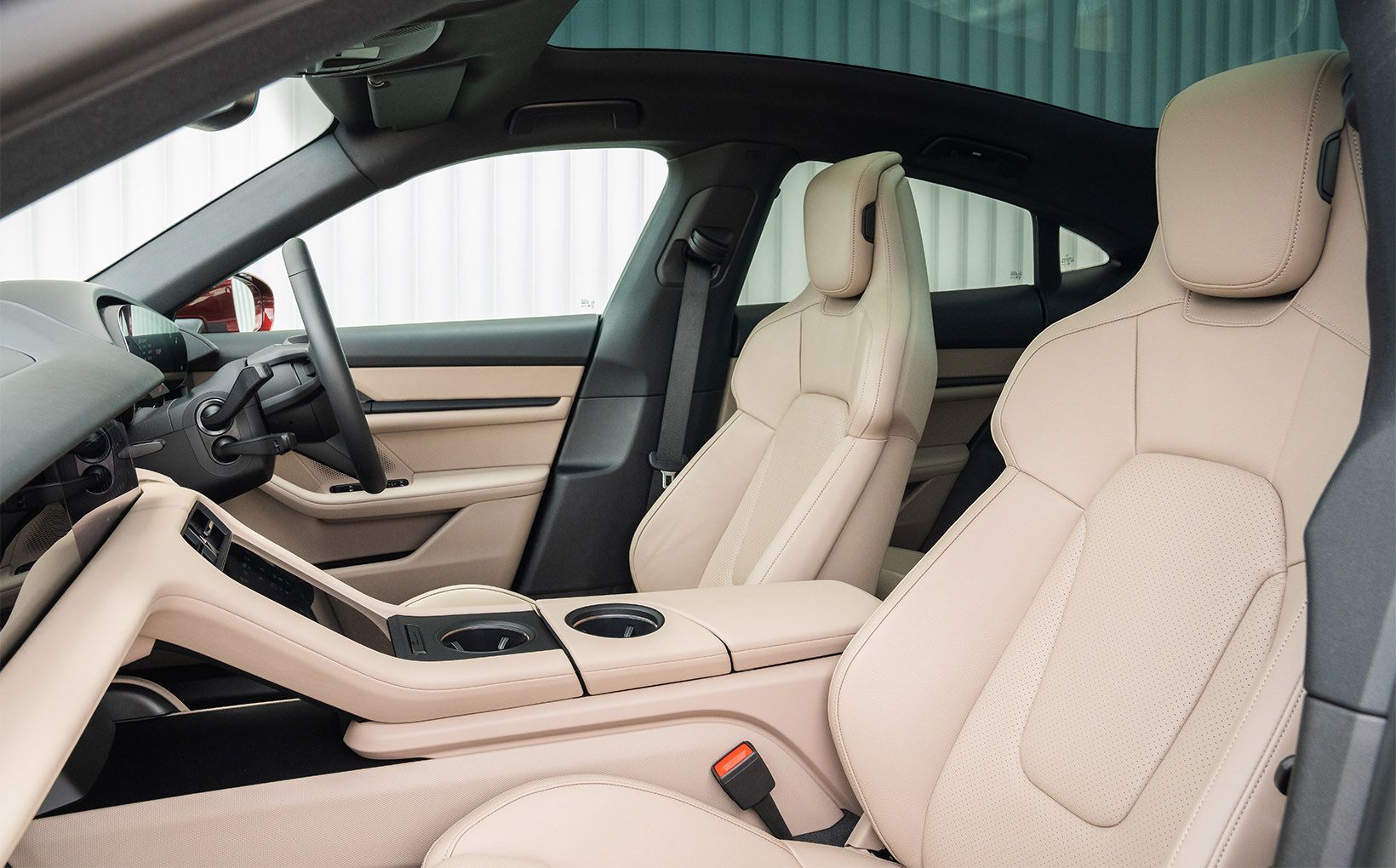 The rear-driven Taycan is considerably more affordable that the Turbo

Being an electric car, there’s another crucial performance metric that’s worth mentioning: range. With the standard 79.2kWh lithium-ion battery, the Taycan RWD can travel up to 369km on a full charge. That number steps up to 434km if you opt for the battery upgrade (a $12K option), which brings energy capacity to 93.4kWh but also adds 80kg to the kerb weight.

Another critical under-the-skin point of difference is the substitution of steel springs for the air suspension that holds up all-wheel drive Taycans. Adaptive dampers are still standard fit on the RWD, however, allowing it to tailor its ride according to conditions and driver preference.

Nineteen-inch alloys are also the default wheel for the single-motor Taycan, and while they look a little shrunken in its vast wheel wells (especially when seen next to the 20- and 21-inchers worn by other Taycans), the chunkier sidewalls they bring should also provide a little more compliance to offset the loss of air springs. 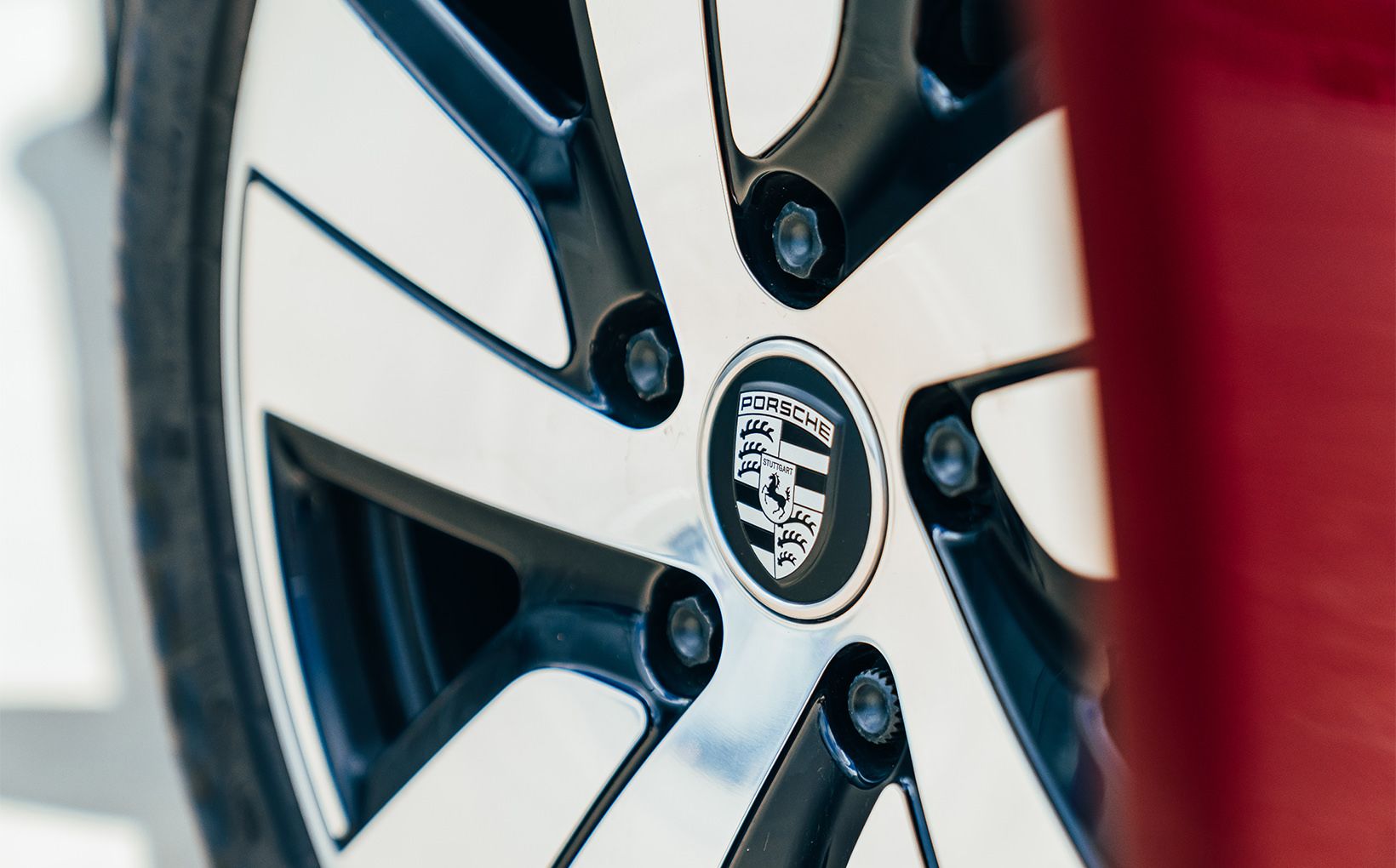 19-inch alloys are standard with larger wheels are available optionally

Yet while power is down and suspension hardware is less tech heavy, the base model Taycan does at least feature the same two-speed transaxle as its more powerful brethren. Most EVs, including Teslas, are single speed, often with a reduction ratio between the motor and the driven wheels.

The familiar performance EV trait of incredible acceleration off the line but asthmatic performance when rolling at high speed is largely down to this gearing strategy, but Porsche side-steps that by equipping all Taycans with a two-speed gearbox on the rear axle motor to extend performance.

Top speed for the RWD Taycan is a heady 230km/h as a result – just 30km/h shy of the top-tier Taycan Turbo S, though naturally it’ll need a longer run-up to get there. 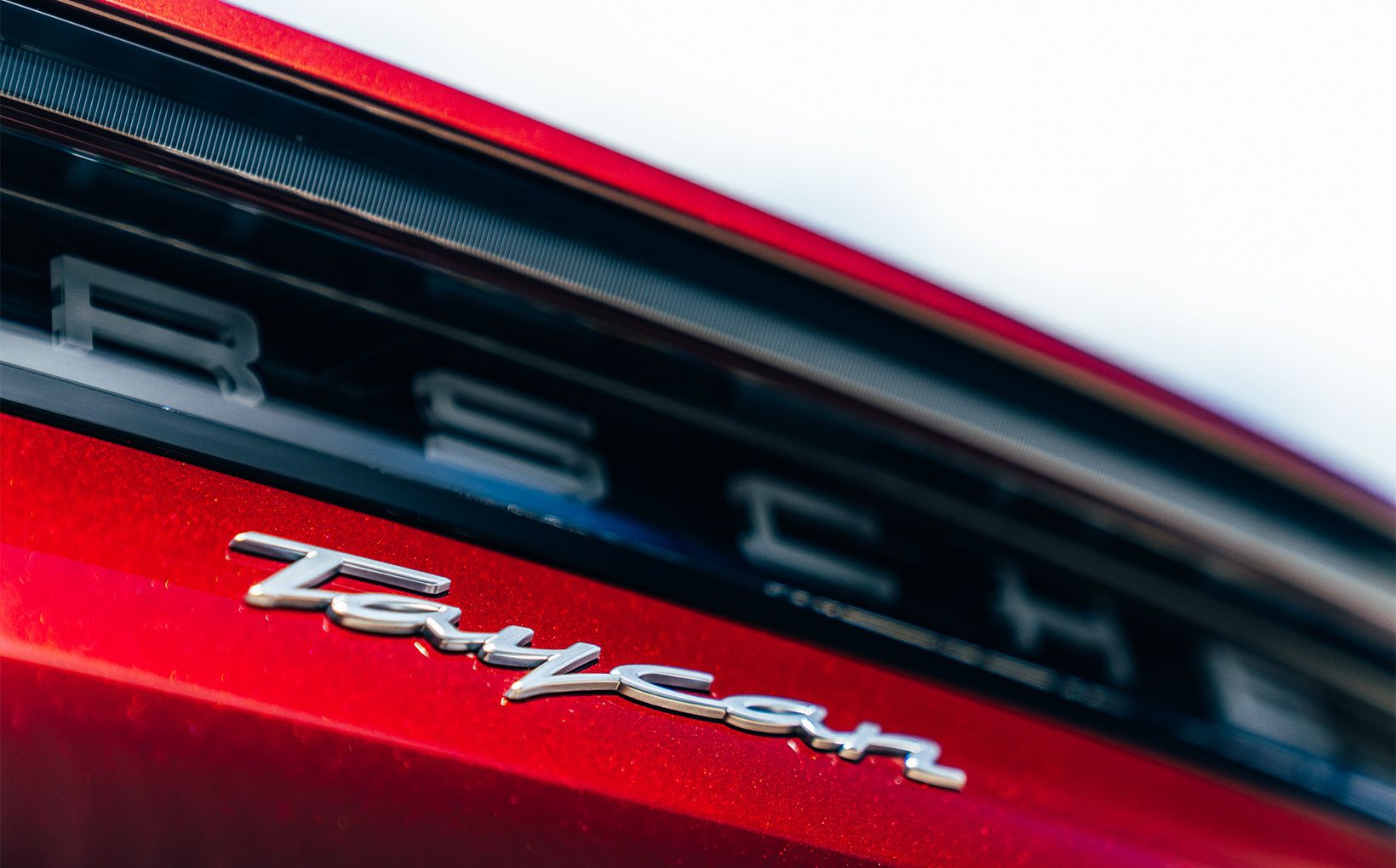 The Taycan looks amazing, no matter which angle you look at it from

Inside, the differences are less obvious. The Taycan RWD sports the same four-seat layout as the rest of the range (a 4+1 configuration is a cost option, and simply adds a centre seatbelt to the rear bench) and gets partial-leather ‘comfort’ seats as standard.

Other highlights include the all-digital instrument panel, standard-issue head-up display and a dual-screen infotainment/vehicle control arrangement that runs up the floating centre stack and onto the dashboard.

As befits a Porsche, a massive menu of options awaits buyers of the Taycan RWD. No fewer than 19 interior upholstery colours can be had (including five leather-free ones), the Comfort seats can be swapped out for Sports pews, the wheels can be upsized, air suspension fitted, and all manner of exterior body enhancements can be optioned in. 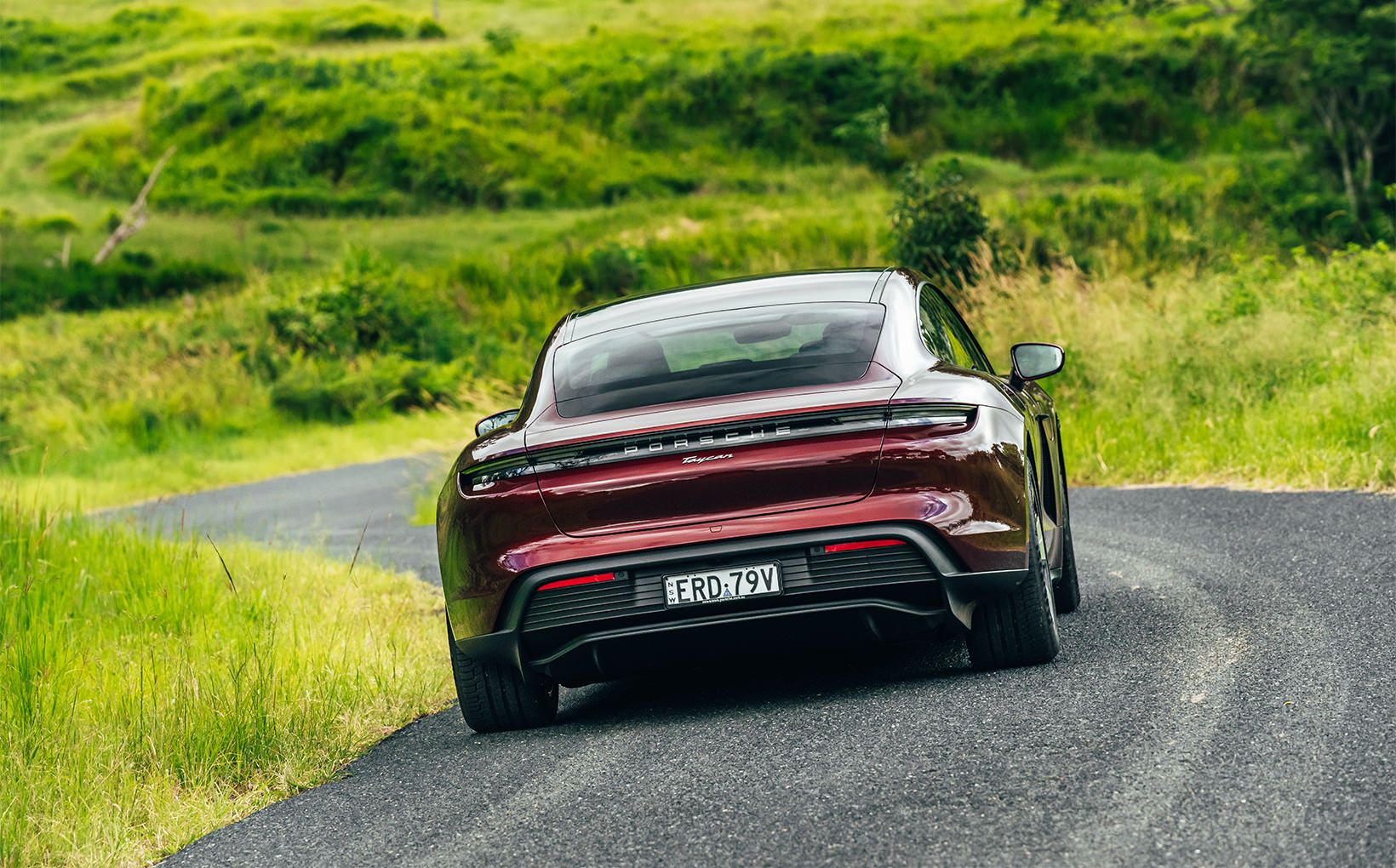 Our tip for keeping it affordable? Try to avoid the options – there are many!

Porsche options command Porsche prices (Want a carbon-fibre bodykit? That’s $17,240), but with the Taycan RWD costing significantly less than its AWD counterparts, going for the rear-driver might liberate enough dollars to get yourself an electric Porsche that’s truly unique.