Back in the day the Nissan Pathfinder was one of the stalwarts of the off-road scene, providing a decent blend of affordability and genuine off-road capability with that reputation sticking through the first three generations.

When the fourth generation launched in 2012 however, things took a turn and to many people, not for the better.

Having utilised the rugged body-on-chassis underpinnings shared with Nissan’s ute range in the first and third generations, the fourth-generation Pathfinder took a huge side-step of the traditional Pathfinder orientation – off-road ability – and became a cushy soft-roader designed to transport families to and from school and maybe down a gravel track.

It is now first and foremost, a big seven-seat family hauler. 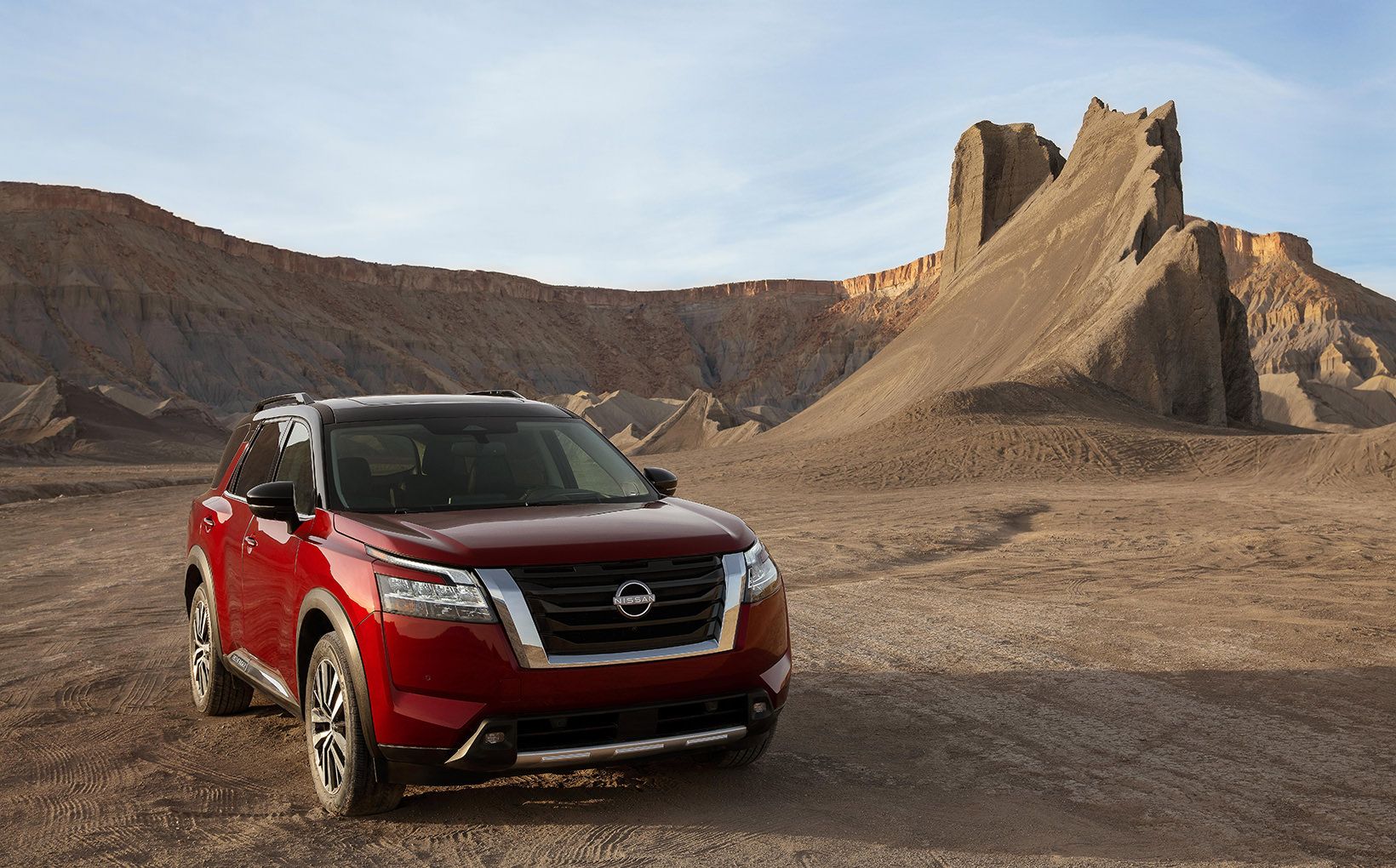 The Pathfinder has been to the gym, worked off some flab and come back with muscles.

With the increasing popularity of ute-based off-roaders, Nissan has scratched its head and tried something a little different with the new Pathfinder, looking to blend some of the early models’ rugged off-road ability with the comfort and on-road refinement of the current model.

The brand as even gone so far as to say the new model is returning “to its rugged roots” with a heap of updates and changes to the drivetrain, styling, interior packaging, underpinnings and technology.

Described by the brand as being reinvented, the new Pathfinder sheds the current model’s plump looking, rounded body shape in favour of a squarer, more Patrol-esque theme, a motion hammered home by the largely similar front fascia arrangement with the inverted trapezium grille being skirted on three sides by a chrome trim piece. 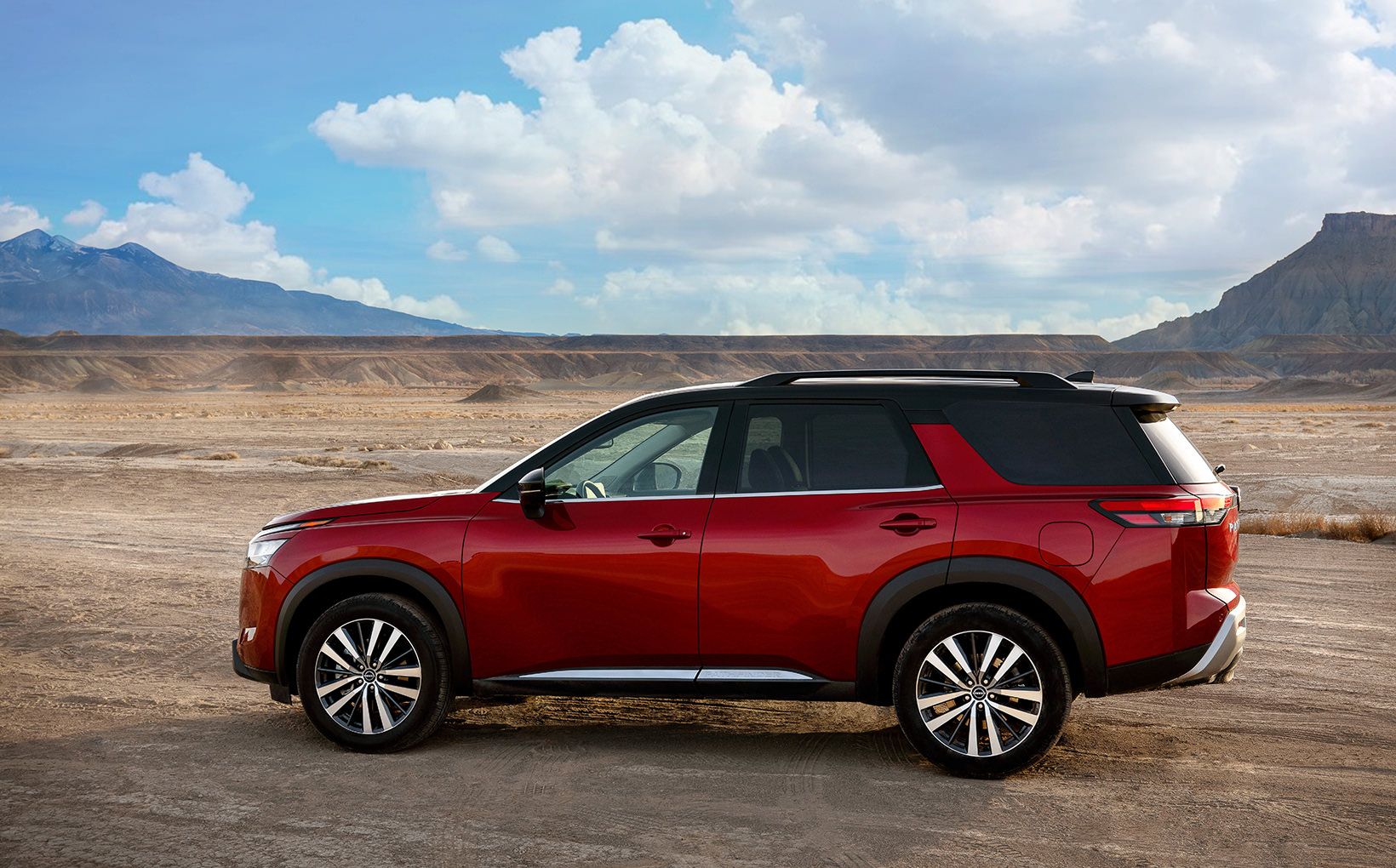 It’s big and square, just like every other seven/eight-seat SUV.

Below the lights is very little of anything, resulting in the Pathfinder scoring a chubby set of cheeks.

Following on from the overall Patrol-shape, some more of that promised ruggedness is injected into the front end in the form of a black cladding and a contrasting silver plastic skidplate.

From the side the new Pathfinder still retains some of the current model’s portliness, featuring the typical large SUV silhouette of a long wheelbase, short front overhang and a longer rear overhang.

The black cladding first seen at the front is present around the wheelarches, complemented up top by the matching roof rails. 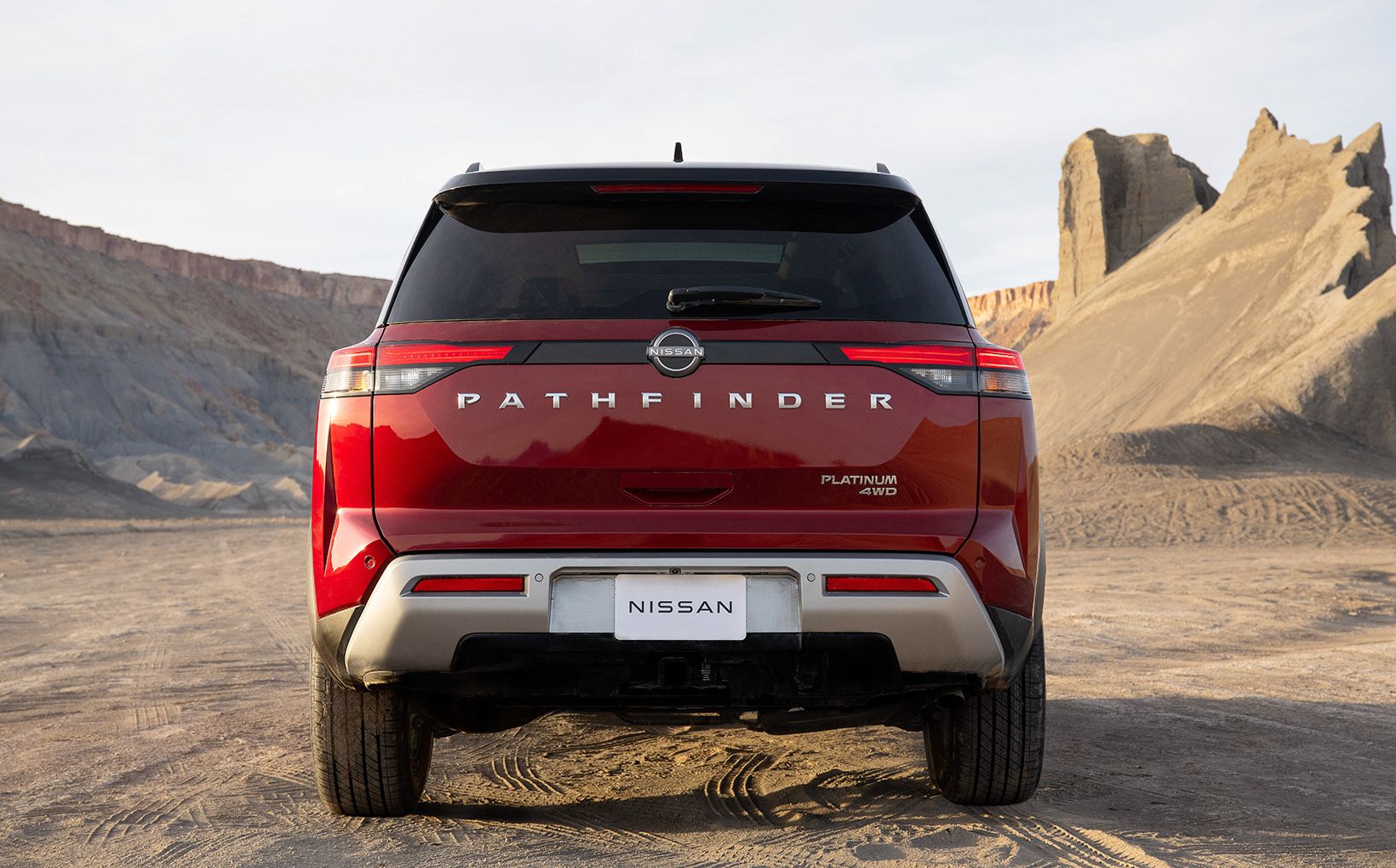 There is no mistaking the new Pathfinder for anything else.

At the rear we find a completely new tailgate design continuing the front end’s square theme with an abundance of white space while the contrasting silver bumper looks to have been designed as a mix between a rear skidplate and a diffuser.

In a move new to the Pathfinder lineage, the next-gen model will be offered (in its native US at least) in both seven- and eight-seat guises with the seven-seater utilising the trendy captain’s chair layout for the second row while the third row uses a three-seat bench.

Nissan says the new cabin has an “open” and “robust” design with buttons aplenty on the centre fascia underneath the 8.0-inch touchscreen infotainment system.

As is usually the way with an initial reveal, the Australian specification details have not been confirmed yet however the US market at least will get four different trim levels – S, SV, SL and Platinum. 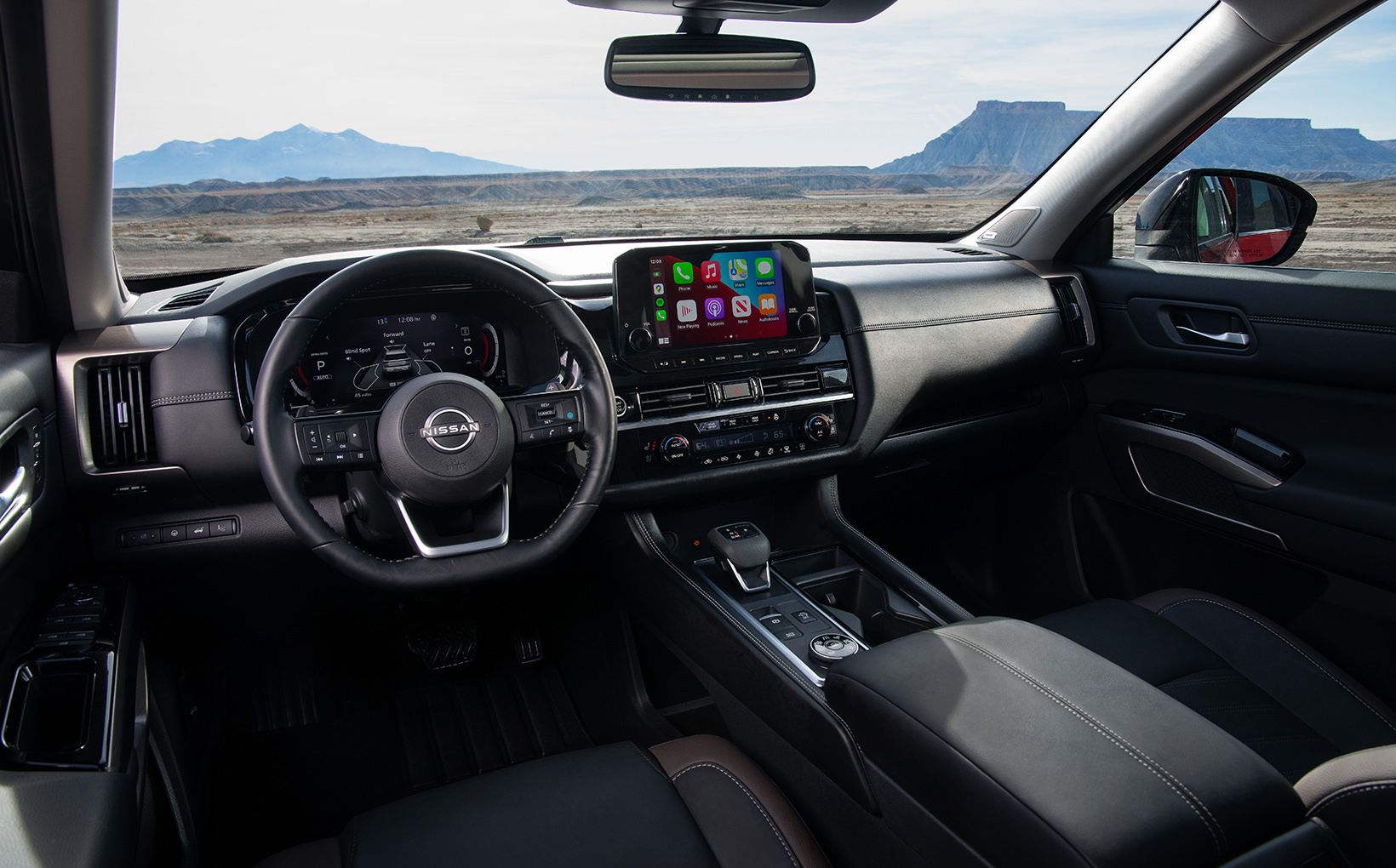 Nissan says the new interior is “open” and “robust”.

While the platform, body and interior may all be new, the 3.5-litre V6 petrol engine isn’t, however it has been tuned develop a bit more power and torque – now 212kW/350Nm – while the current CVT has been swapped out in favour of a new nine-speed automatic.

As one would expect, both two- and all-wheel-drive configurations will be offered.

To help make the “4WD” (all-wheel-drive) versions as capable as possible both on the black-top and off it, Nissan has fitted the new Pathfinder with a seven-mode ‘Drive and Terrain Mode Selector’ with the 4WD system able to be locked together when needed. 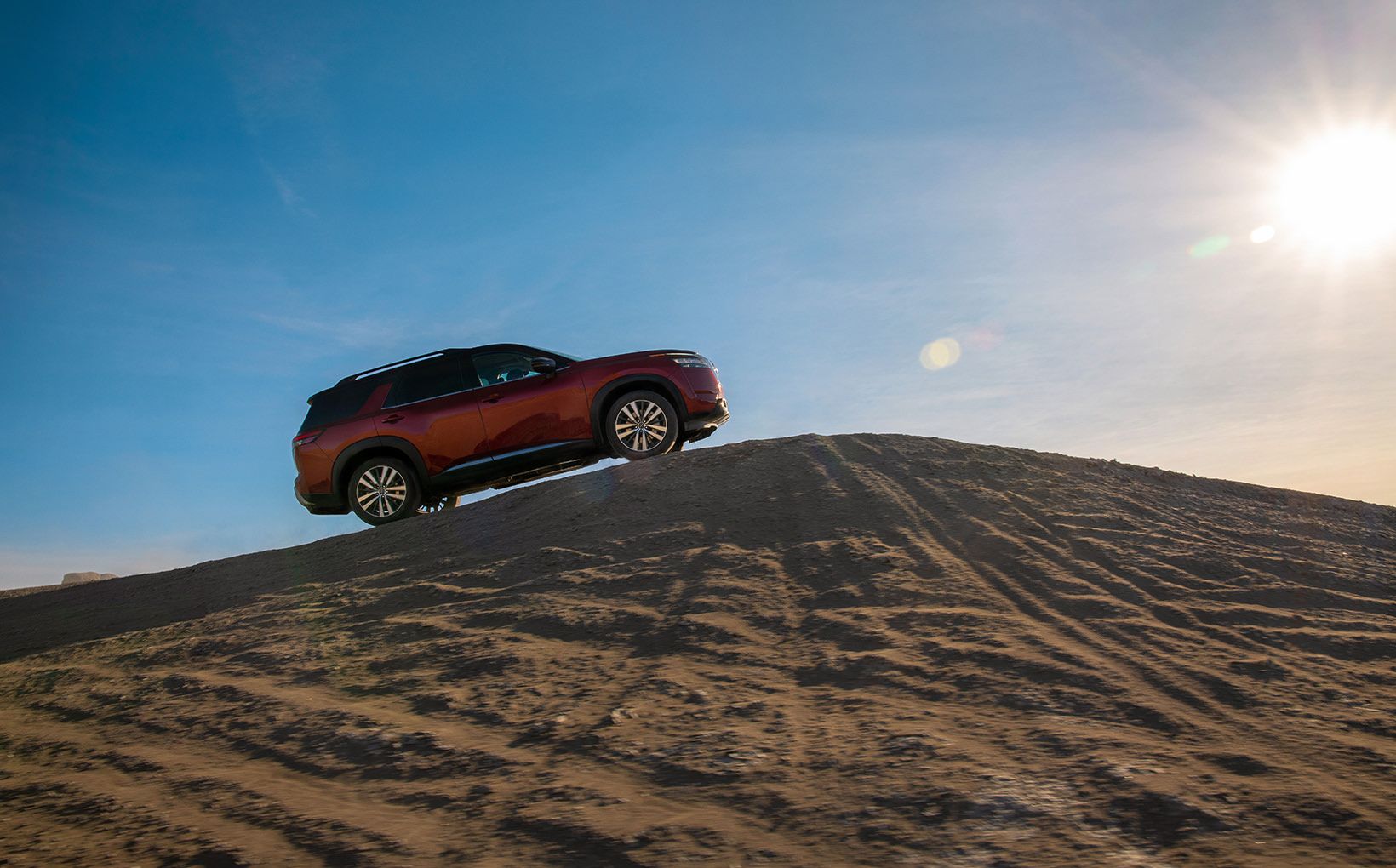 Time will tell if the Pathfinder is actually ready to go back out and find new paths.

Technology however has never been an issue for large SUVs when it comes to off-roading, the limiting factors are usually an inherent lack of ground clearance, wheel articulation and low-range gearing while large-diameter alloy wheels and road tyres only serve to exacerbate the situation.

While there has been no official word from Nissan, reports out of the US are quoting a 183mm ground clearance for the new Pathfinder – about 30mm too low to be competitive with the current crop of off-road minded SUVs.

For what it’s worth, the new Subaru Outback with which the Pathfinder will technically share a sales segment with offers 213mm, without being marketed as a dedicated 4x4. 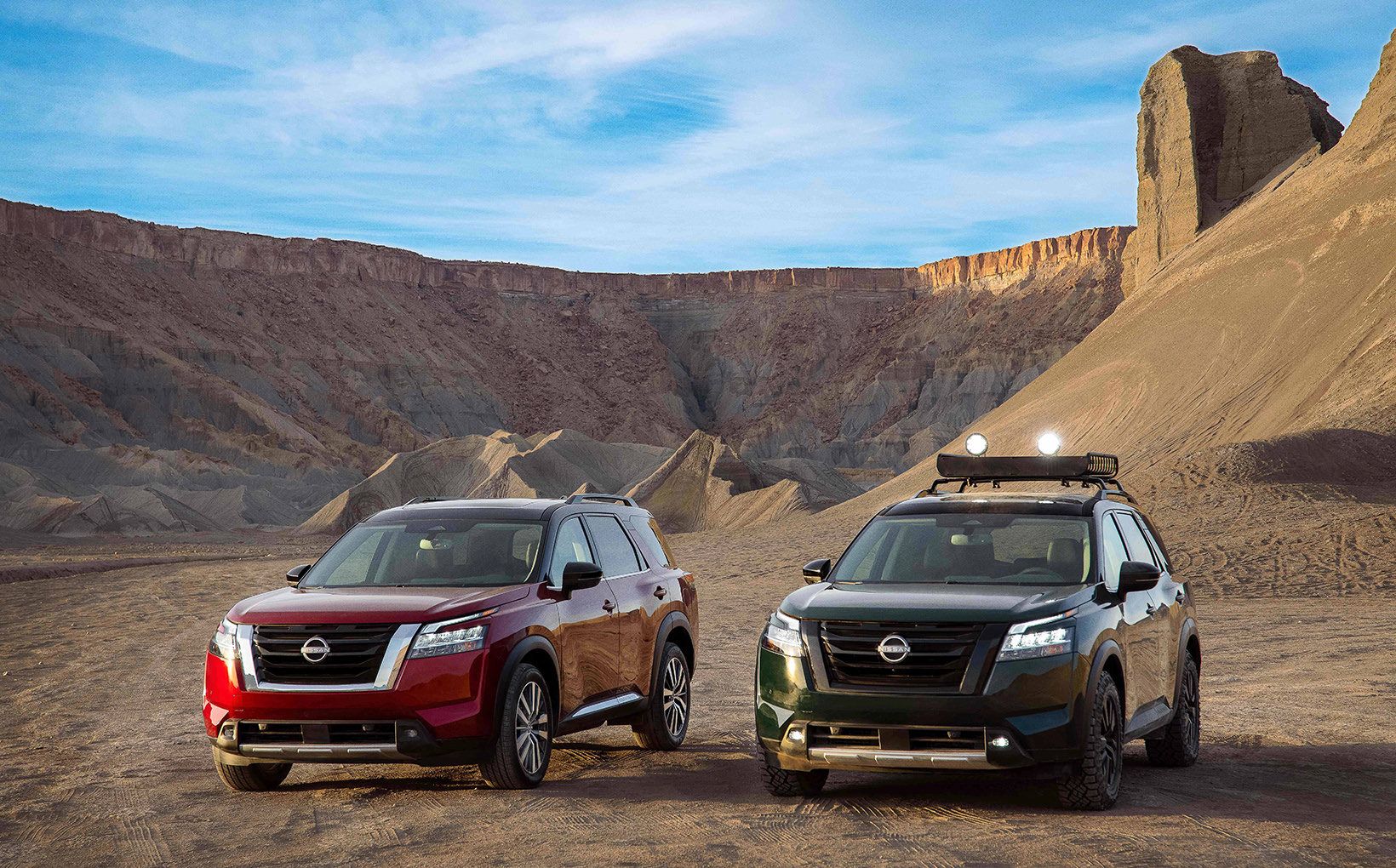 Nissan stands by the idea the new model is returning to its “rugged roots”.

Time will tell then if the new Pathfinder really has returned to its “rugged roots”, however some promotional images released by Nissan (above) have shown one example kitted out with aggressive mud-terrain tyres, so the brand clearly has confidence…

Morgan is recycling a batch of unused chassis to c...