It’s no secret that Australia has a clear love affair with pick-ups – since 2016, the best-selling vehicle in Australia has been a ute – with recent years seeing a number of brads release high-end, lifestyle oriented utes to cater for those who want to use their vehicle for work or play.

In recent years, models such as the Ford Ranger Raptor, Nissan Navara N-Trek Warrior, Toyota HiLux Rugged X, HSV Colorado SportsCat and even larger utes like the Ram 1500 and Chevrolet Silverado 1500 have arrived in Australia to a generally positive reception.

The latest competitor in the high-end ute market is the Jeep Gladiator – a brand-new vehicle from the American off-road specialist that blends the rough-and-ready performance of the Wrangler with a longer wheelbase and added utility of a tub in the rear. 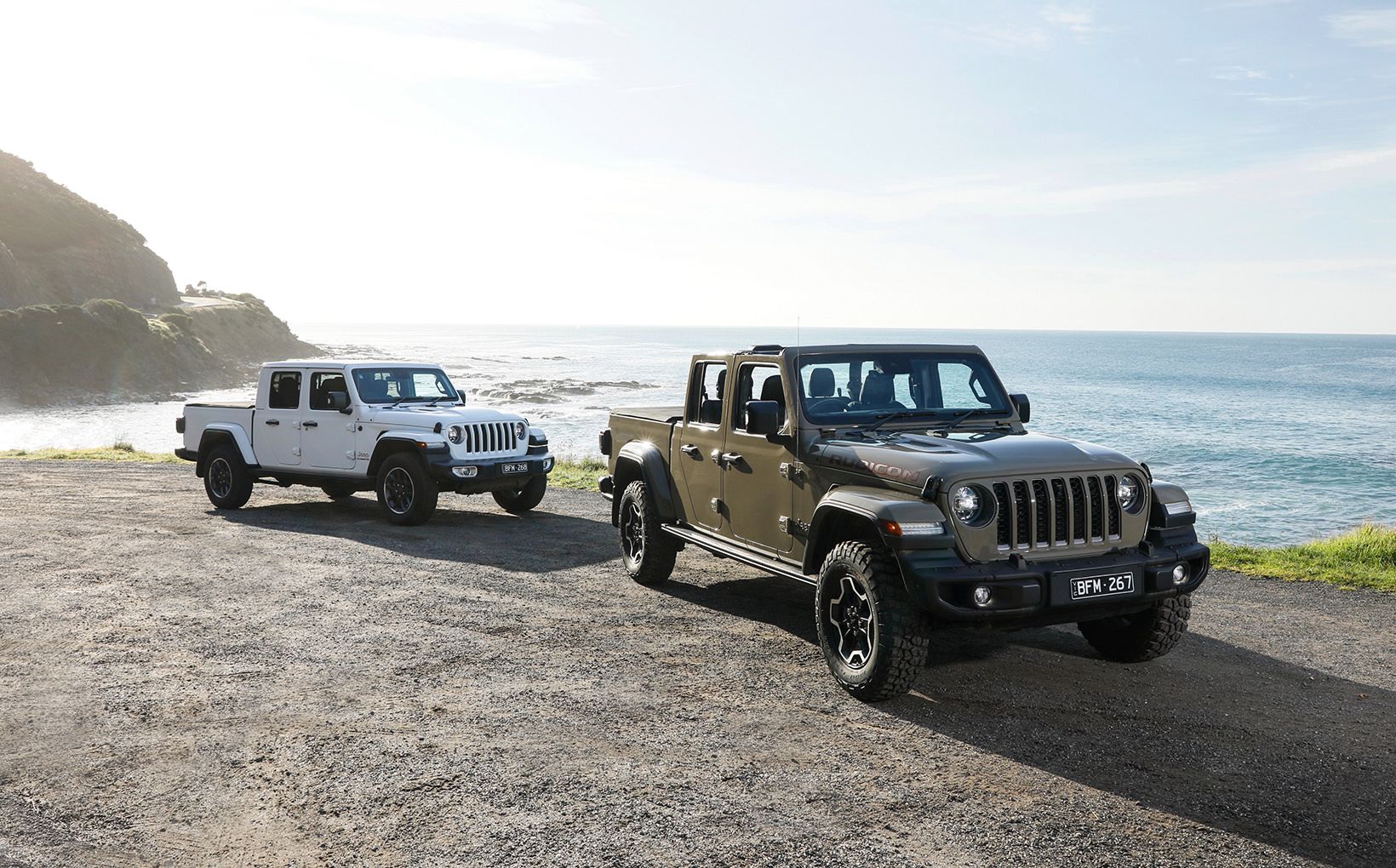 The Jeep Gladiator is the latest entrant to the high-end 4x4 pick-up market.

Many car-makers see the introduction of a pick-up their portfolio as an opportunity to see a large uptick in sales, however Jeep has stated it has no desire to offer volume-selling workhorse grades that would appeal to tradies and fleets, and will instead play solely in the high end of the 4x4 ute market.

“I don’t think we want to play into the ute markets, the product has not been designed for it, and we don’t want to be positioned exactly like this,” said Jeep Australia director of brand and product strategy Guillaume Drelon.

“And we are not intending to come and sell 15,000 cars in that market, because we know we have a product that is unique and specific and with a purpose.” 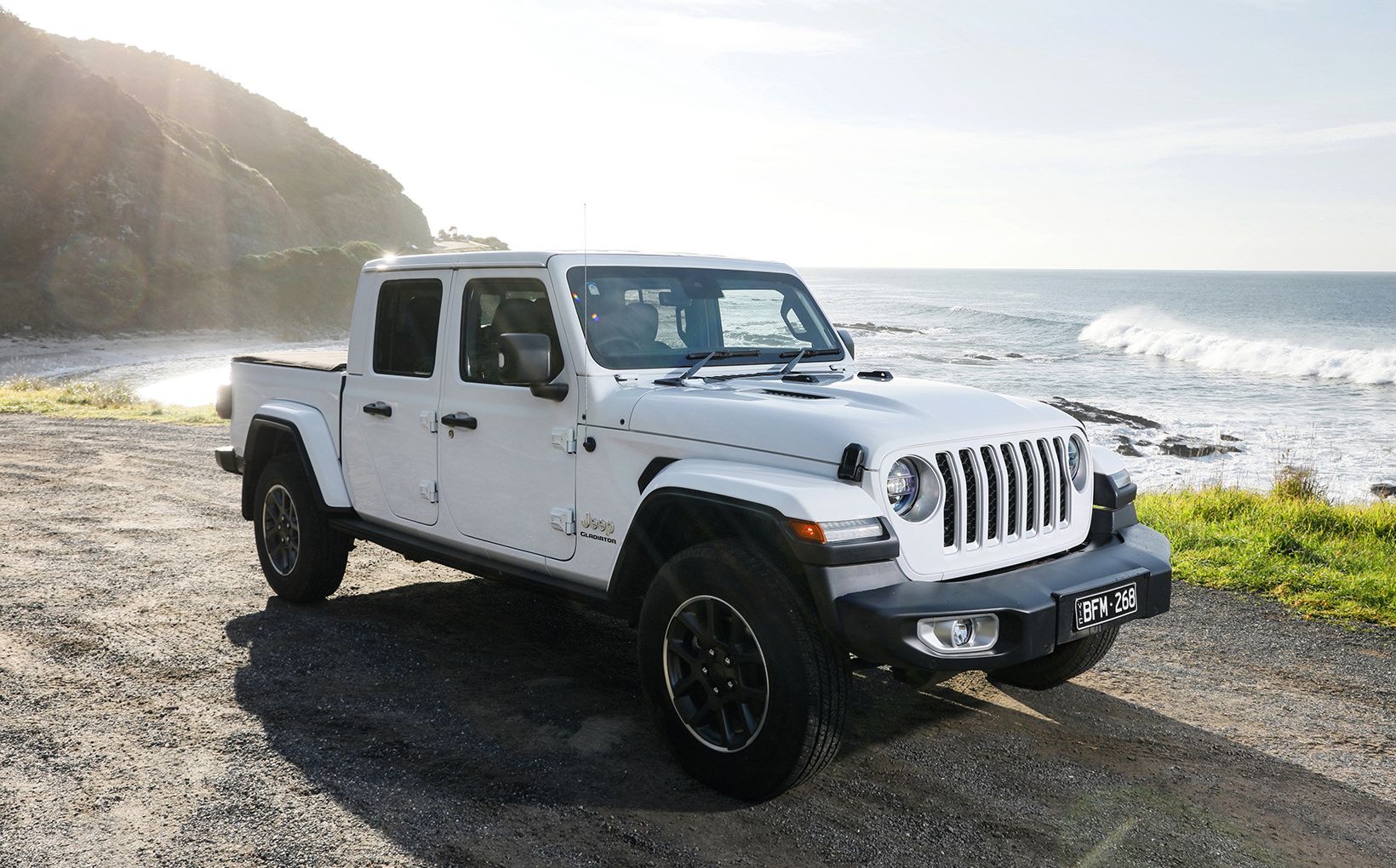 It is clear that the Gladiator shares much of its DNA with Jeep’s legendary Wrangler off-roader.

The Gladiator arrives in Australia with two full-time variants – the $75,450 Overland, and the off-road oriented Rubicon, which commands a $1000 premium.

A more affordable S-Limited grade based on the Overland will also be introduced before the year is out, and will undercut the rest of the range by around $10,000. 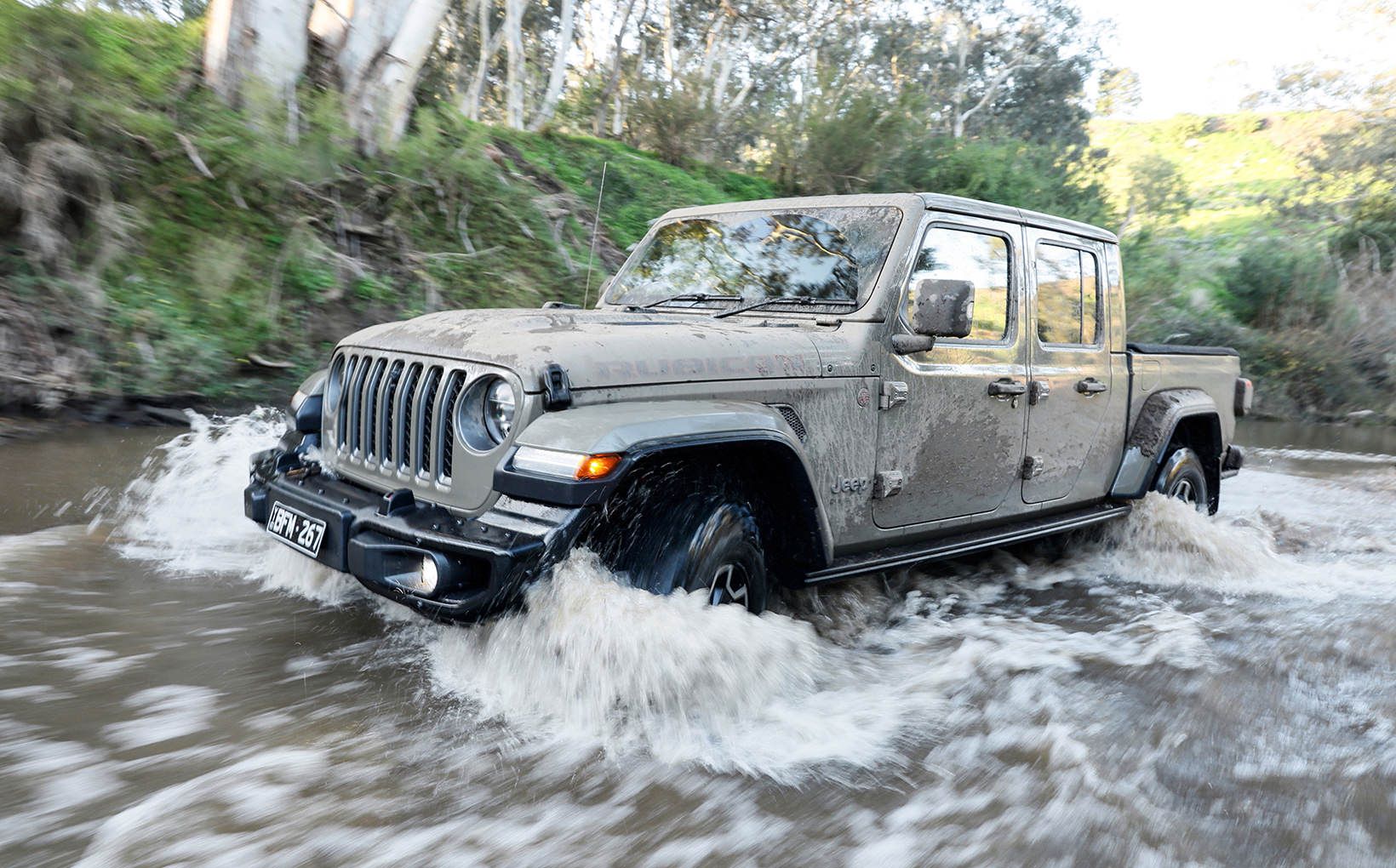 The Gladiator is aimed at lifestyle and off-roading enthusiasts, and is built for purpose.

With Jeep Australia only able to choose one engine to fit under the bonnet of the Gladiator, it has opted for the tried-and-true 3.6-litre Pentastar petrol V6, which pumps out 209kW/347Nm while driving all four wheels via an eight-speed automatic transmission.

Jeep chose the V6 due to its smooth power delivery and output, while also looking at Wrangler sales where 90 per cent of the volume came from the V6.

In the US, Jeep recently announced the Gladiator will be offered in future with a 194kW/600Nm 3.0-litre turbo-diesel V6 – a seemingly perfect fit for the Australian market – however it will not be offered Down Under, due to the high cost of re-engineering it for right-hand drive. 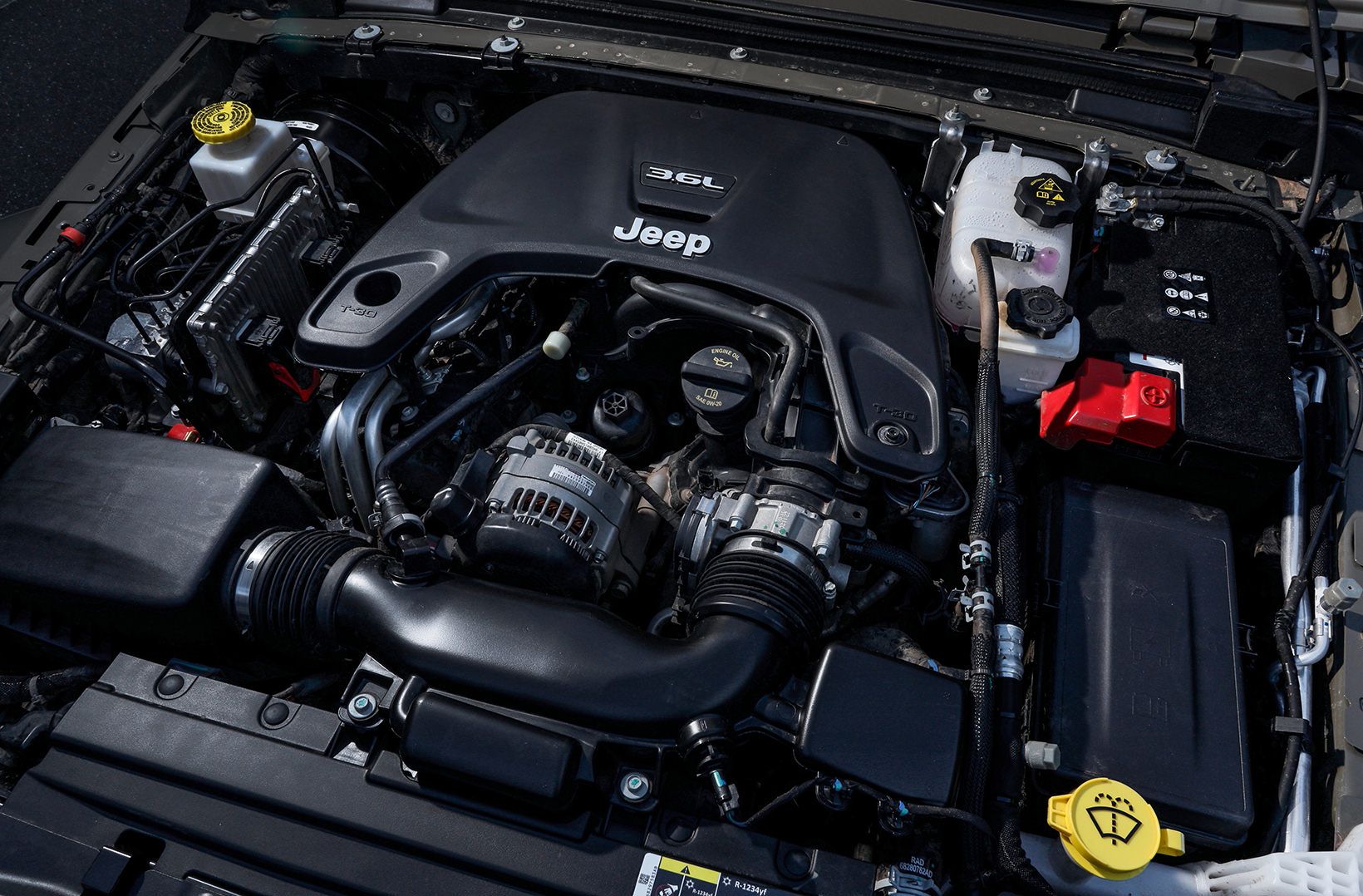 A 3.6-litre petrol V6 is the only engine option for the Gladiator.

Official fuel consumption for the V6 is rated at 11.2 litres per 100km for the Overland, up to 12.4L/100km in the heavier Rubicon, with CO2 emissions pegged at 260 and 288 grams per kilometre, respectively.

The Gladiator is underpinned by a tweaked and stretched version of the Wrangler’s ladder-frame chassis, checking in at an imposing 5591mm long with a 3488mm wheelbase, along with a width of 1894mm and height of 1905mm.

Its large rear tub (no steel or aluminium tray is offered) measures 1531mm by 1442mm with a full-size spare tyre underneath, making it big enough to fit a pair of dirt bikes in the rear. 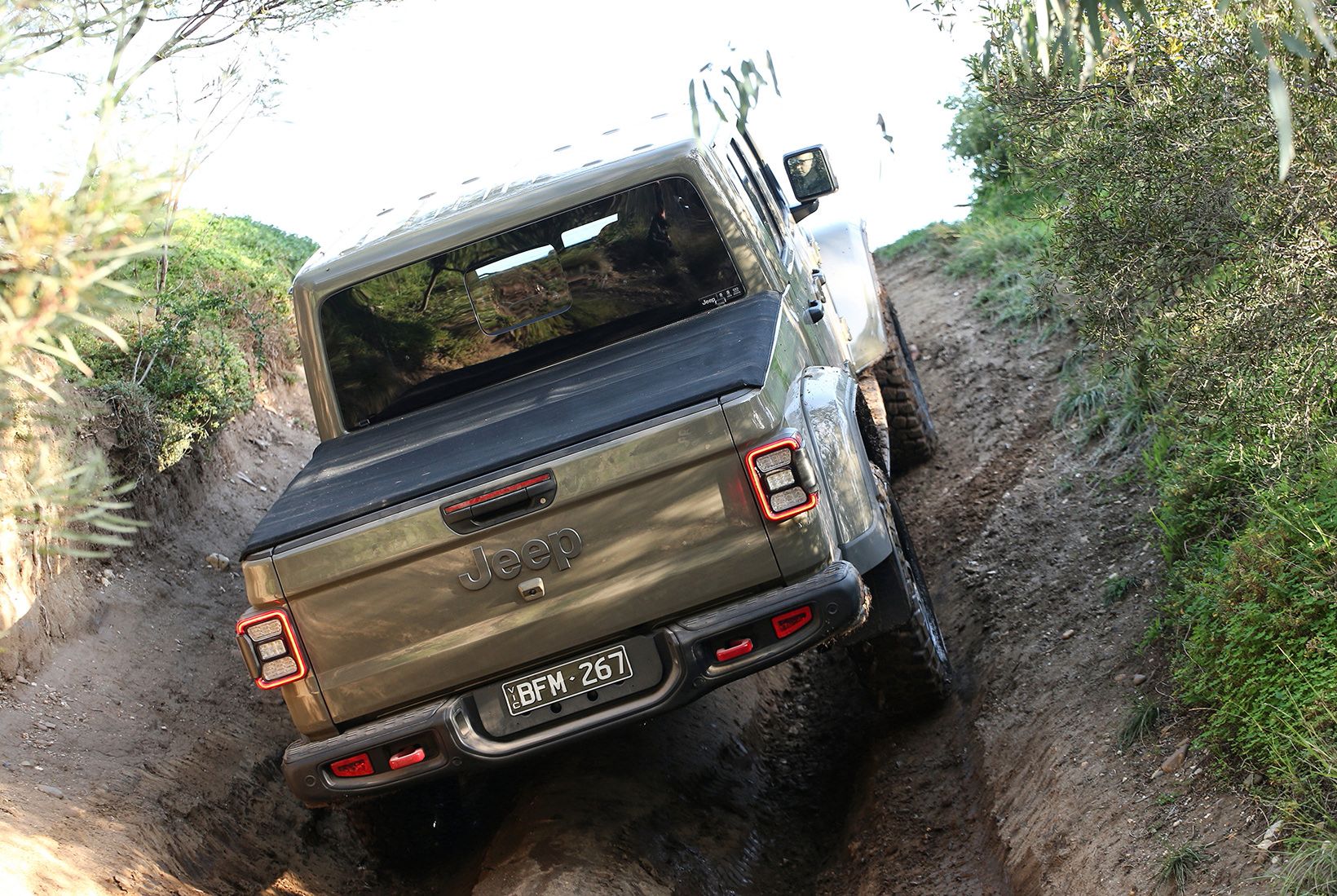 The off-road ability of the Gladiator is unmatched by its rivals.

Solid axles feature front and rear, as does coil-sprung suspension, with the five-link rear set-up borrowed from the Ram 1500.

Payload and braked towing capacity struggle against rivals with 620kg and 2721kg on offer respectively, however where it trumps its rivals is in its phenomenal off-road ability.

All grades come with a full-time low-range transfer case with the Overland scoring Jeep’s Selec-Trac on-demand 4x4 system and the Rubicon/Launch Edition stepping things up to the Rock-Trac system with front and rear locking differentials. 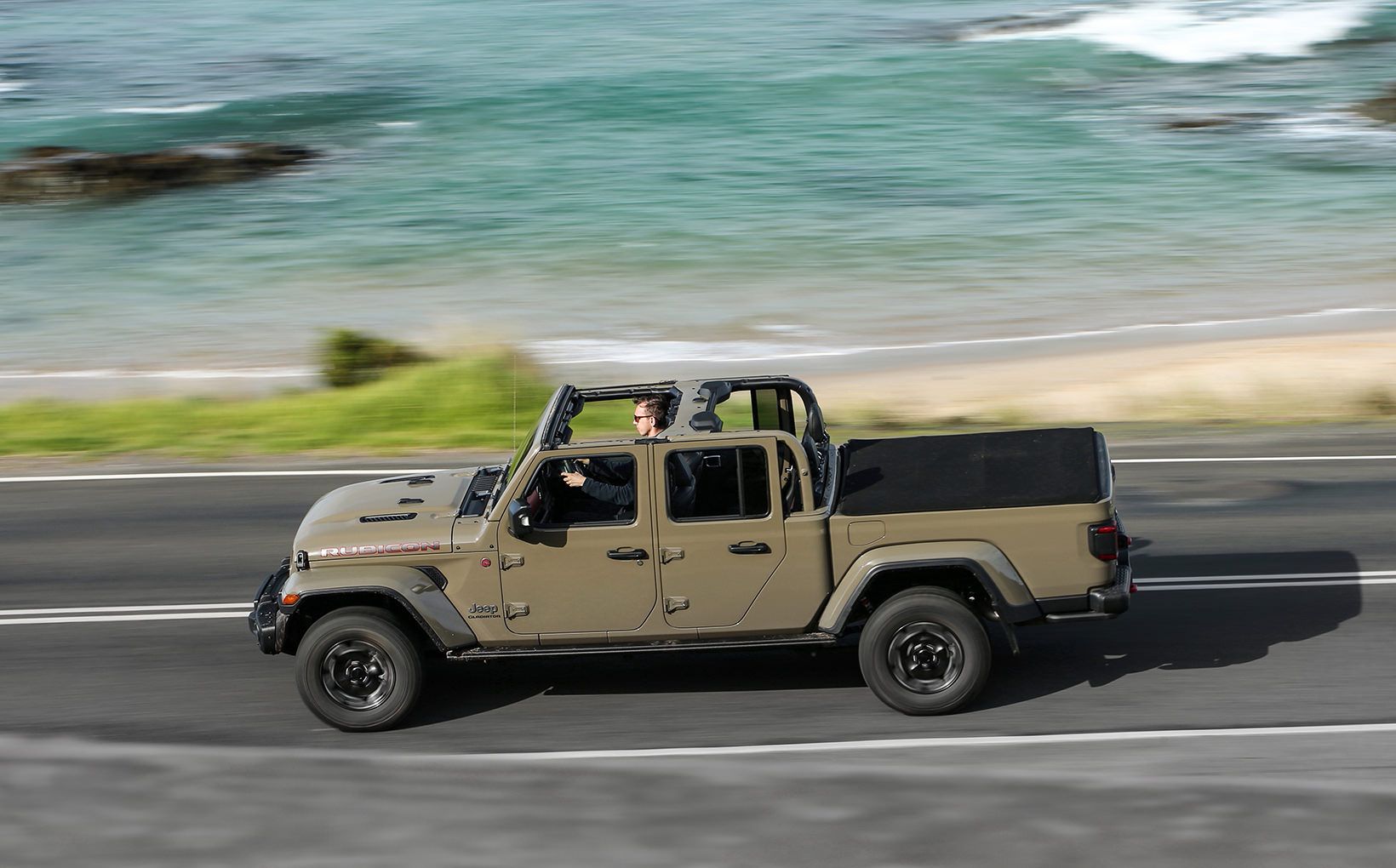 It’s not often that you see a 4x4 pick-up with a removable roof! 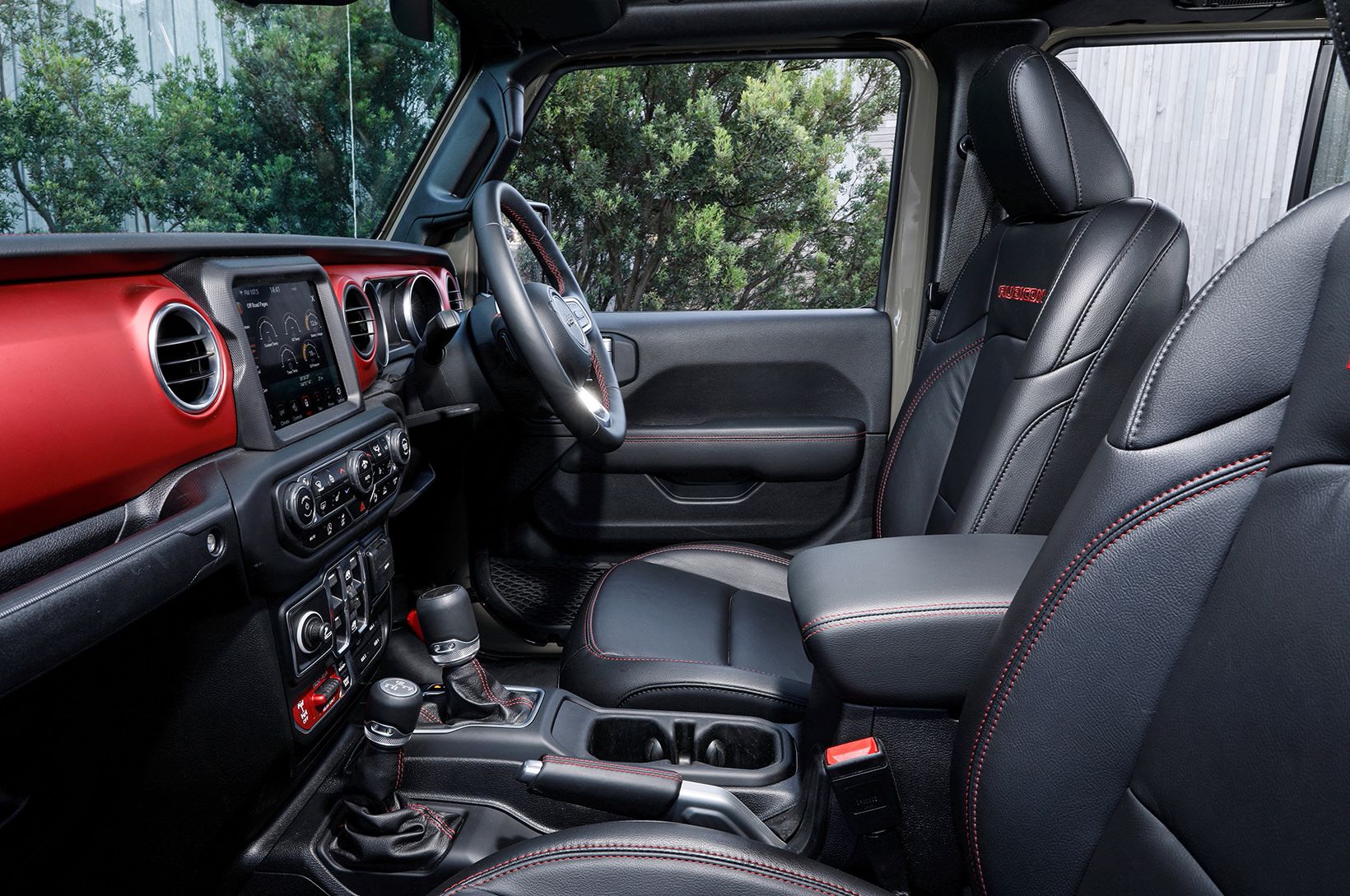 The hard-wearing interior is able to be hosed out if it gets dirty.

In a unique feature for the pick-up segment, the Gladiator can be optioned with either a removable hard-top or soft-top convertible, while the doors can be removed completely and the front windshield folded down. 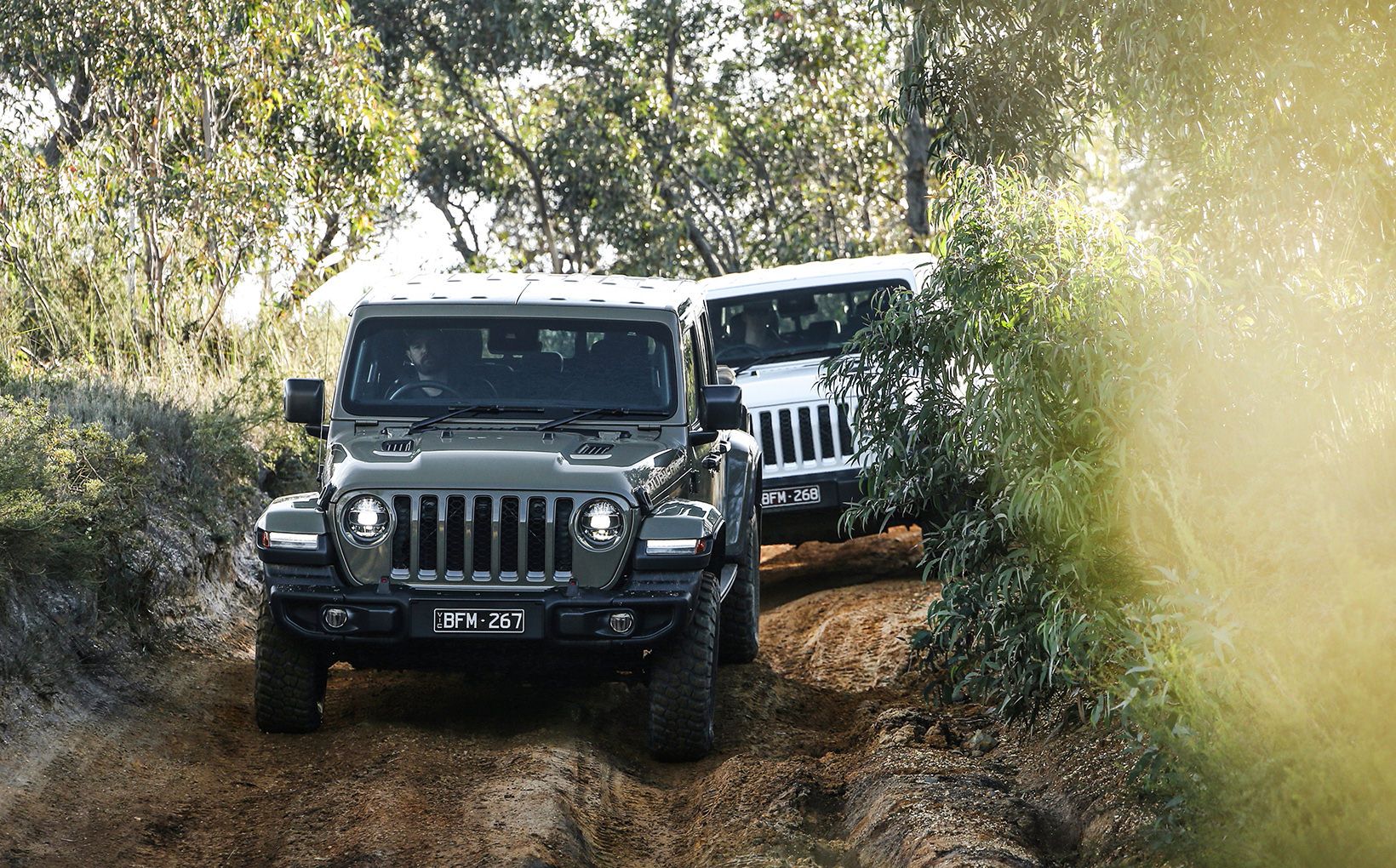 Expect to see the Gladiator traversing the tracks all around Australia in the future.

Gladiator owners will be able to choose from a vast catalogue of factory-backed accessories, with 74 different items available from the Mopar range.

The Gladiator is hardly a typical pick-up, however it does provide a truly unique option in an increasingly crowded Australian new-car market.