At long last, Hyundai Motor Company (HMC) has confirmed the Kona N is a thing and that it’s heading to Australia before the years end, taking the brand’s number of pending 2021 N and N-Line launches to eight.

By the time the year is out, HMC will have launched the updated i30 N hatch, i30 Sedan N, i20 N, Sonata N-Line, Tucson N-Line, Kona N-line and the full fat Kona N explored here, making the Korean brand one of the dominant forces in the mainstream performance market.

Residing under the bonnet of the Kona N is the same force-fed 2.0-litre four-cylinder petrol engine as the i30 N – hardly surprising given the regular Kona and i30 ride on the same platform – paired to the brand-new eight-speed ‘N DCT’ dual-clutch automatic transmission.

The Kona N is happening and it’s coming to Australia.

While power and torque are yet to be confirmed, the safe money would be on the same 206kW/392Nm peak outputs as the facelifted i30 N but it remains to be seen if the Kona will sport front-wheel drive (same as i30) or all-wheel drive, with both options being feasible given the regular Kona is available with AWD in 1.6T guise.

Either way, launch control has been confirmed as standard equipment so a quick getaway is almost guaranteed.

Visually the Kona N looks to take a lot of its styling cues from the lesser N-Line – aggressive front fascia and grille, chunkier side skirts, more aggressive rear apron, dual exhaust tips, bigger alloy wheels and a lower ride height – however final conclusions are still a little hard to be drawn given all of the images released by HMC are of an advanced development car adorned in feature-hiding camouflage. 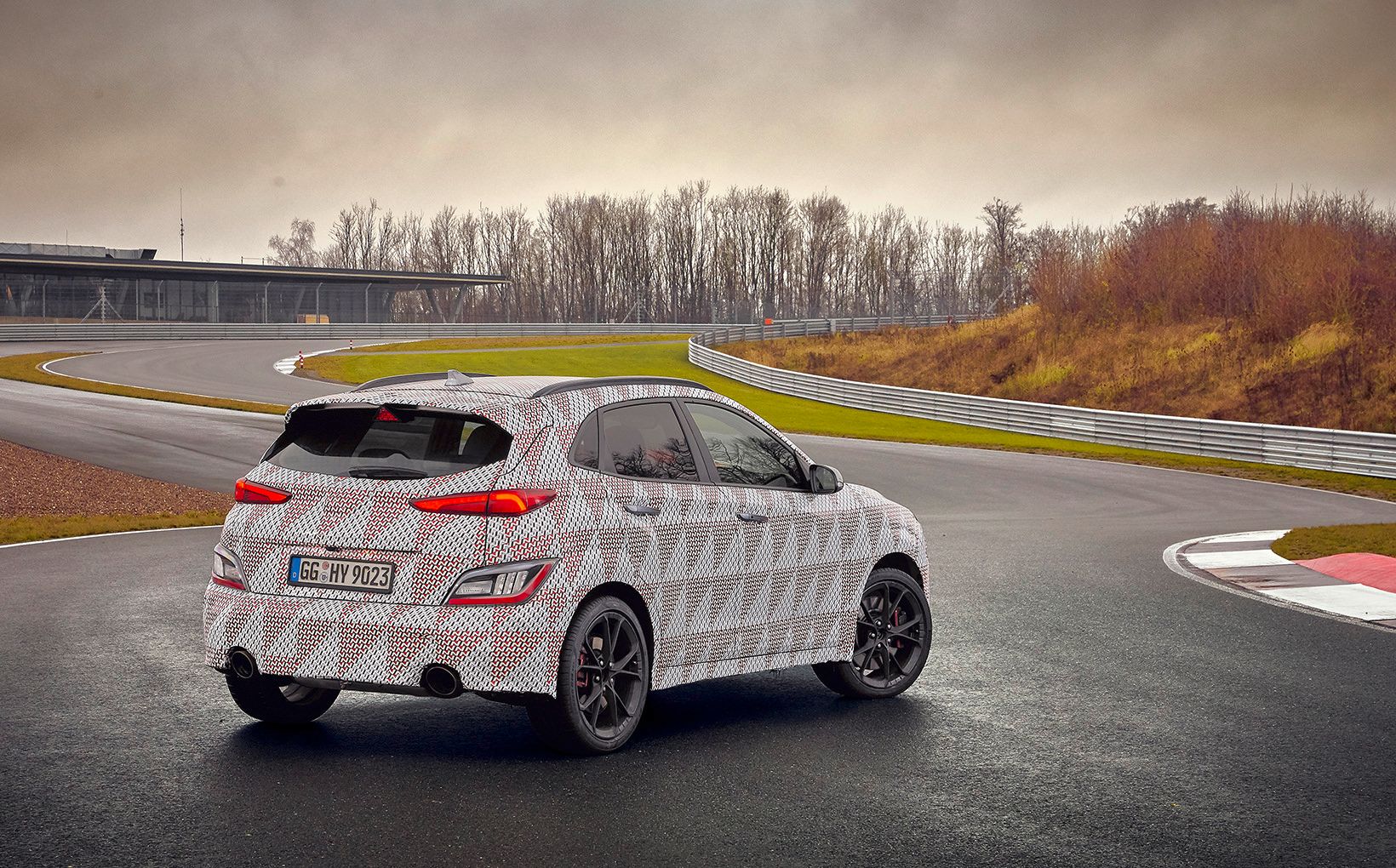 While its covered in camouflage, the familiar Kona N-Line-derived features can be seen if you look hard enough.

Being an SUV the Kona N will inevitably ride higher than the hatch on which it’s based meaning it should offer a little more in the way of versatility and it seems HMC are of the same mindset, with one of the teaser images showing the hi-po high-rider in the wilderness with no tarmac in sight.

Whether or not the Kona N will possess any off-road capabilities remains to be seen however head of Hyundai N and Motorsport Till Wartenberg has decreed the brand’s first hot-SUV would provide “plenty of versatility and driving thrills”.

The rest of the teaser images were snapped in and around a race track, a clear indication of the car’s primary objective… (it’s speed). 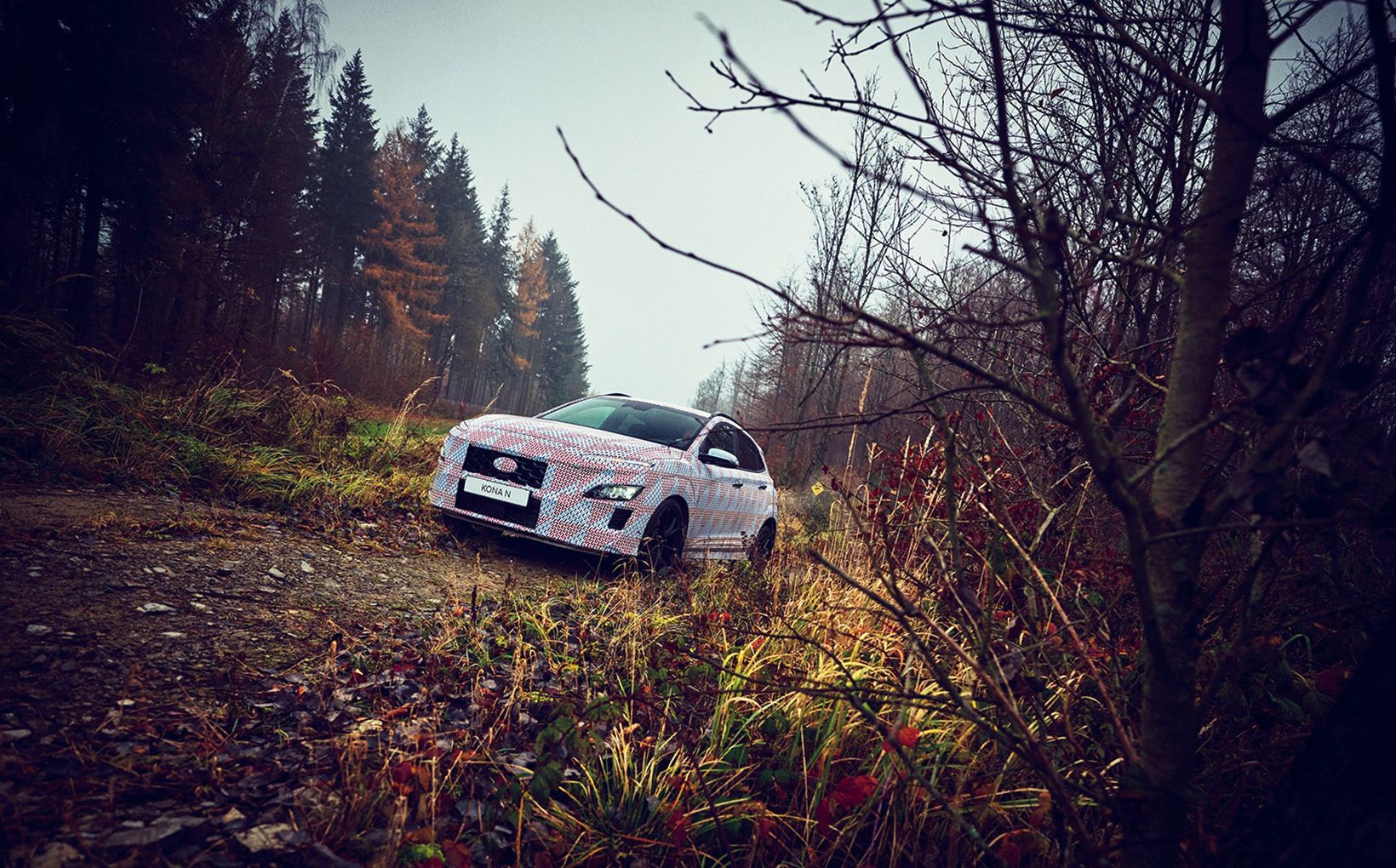 The Kona N’s off-road capabilities remain to be seen…

Compared to the no-nonsense i30 N and i20 N hot hatches, the Kona N is far more of a niche product according to HMC Australia corporate communications general manager Bill Thomas, with the hatches occupying what the brand describes as the core performance market.

“So you have i30 and i20 (Ns) landing in the segments that will establish and solidify our reputation where the core of the market is. 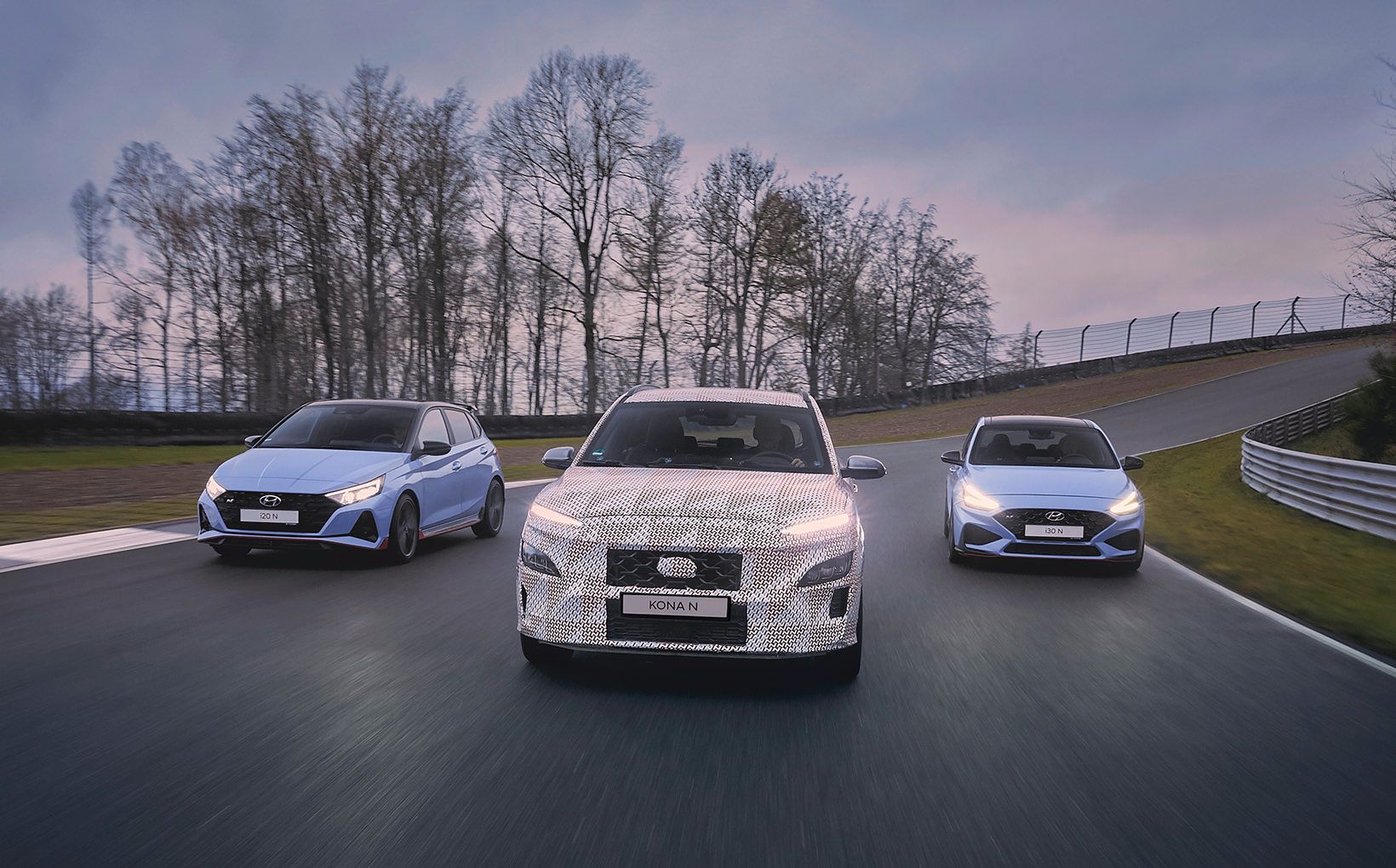 Compared to the core-minded i30 and i20 Ns, the Kona is a far more niche product.

“Now, with Kona N, running on the same platform as i30, we are extending into new territory, a more-niche product that smashes segments wide open.”

When it eventually touches down in Australia, the Kona N will sharpen its knives and prepare its arsenal to go into battle against the looming Volkswagen T-Roc R – essentially a high-riding Golf R – while also picking a fight upmarket.

Whether Kona N scores AWD or not, punters can expect the aggro little Korean to line-up other premium – and much more expensive – offerings like the Mercedes-AMG GLA35, BMW X2 M35i and recently confirmed Audi SQ2. 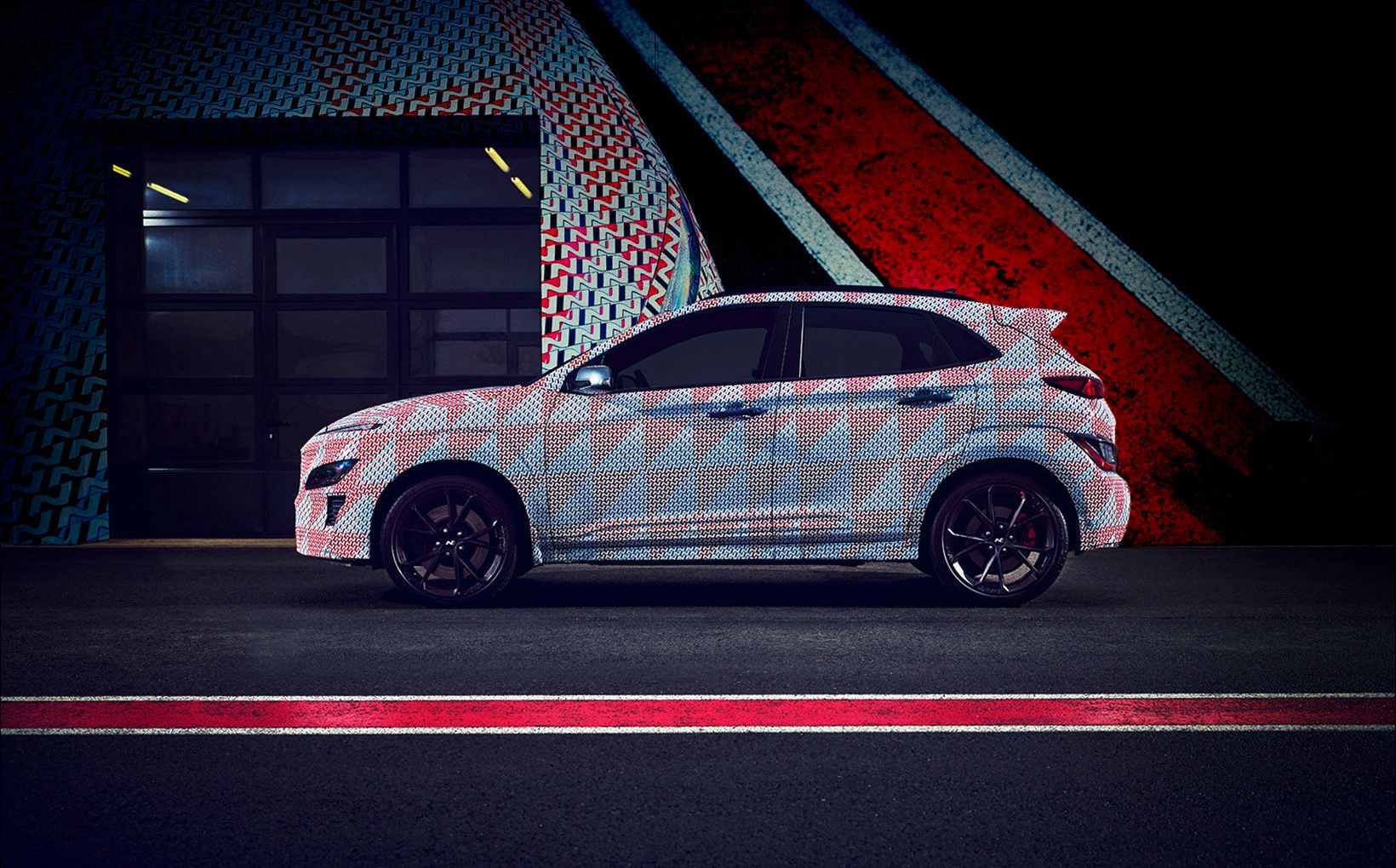 The Kona N could be the king of the (niche) mainstream performance compact SUV market.

Save for the aforementioned VW, no other mainstream brand currently has a high-performance compact SUV in their line-up with Ford Australia refusing point blank to bring the peppy Puma ST Down Under, and even if it did, the Kona would have it severely outgunned.

In September last year the Mexican arm of Mazda unveiled its new CX-30 Turbo which develops 186kW/433Nm when run on 98 RON premium unleaded, however its chances of coming to Australia are admittedly very slim given it is produced solely for left-hand-drive markets.

HMC could well be on a winner then, almost by default. 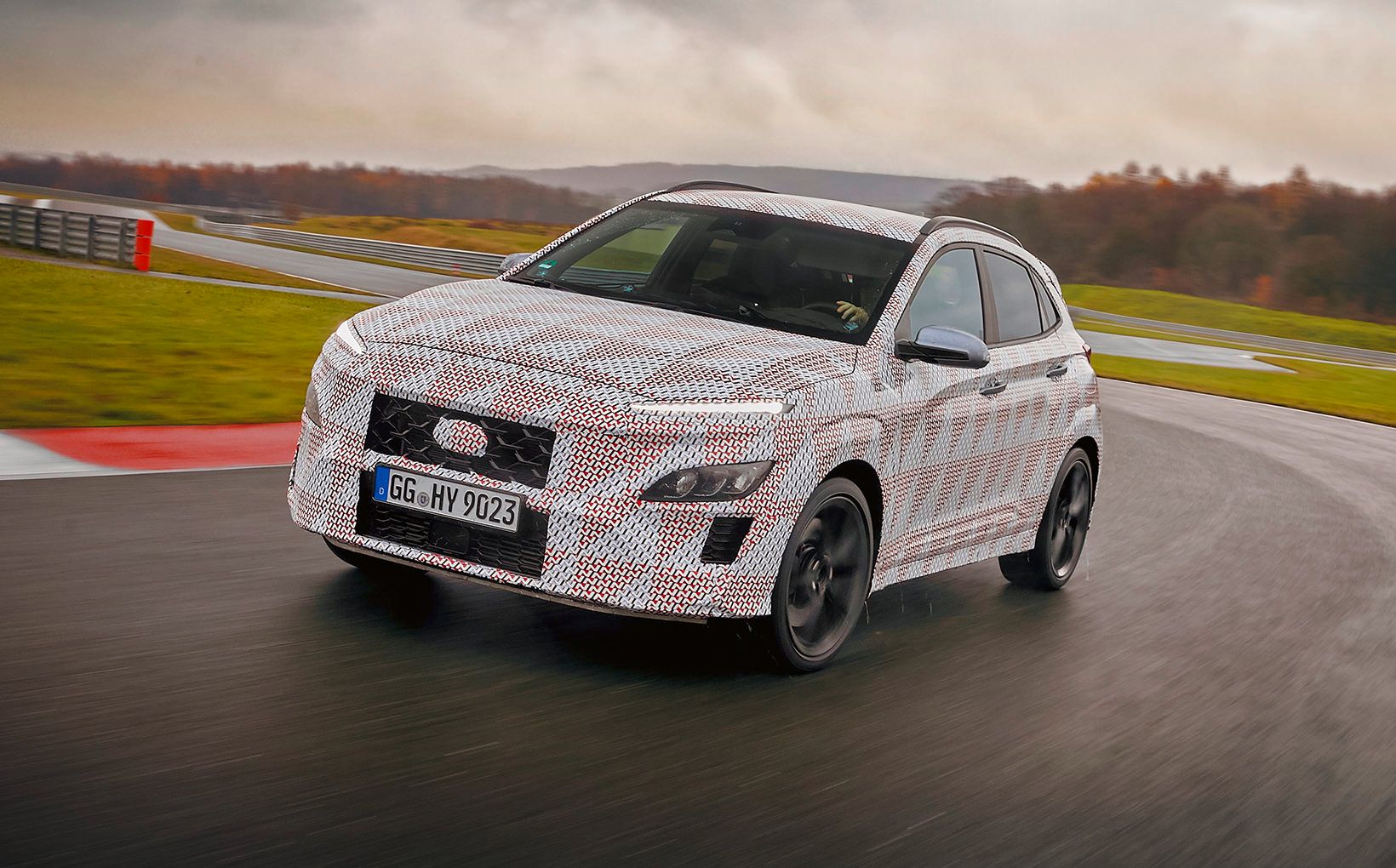 It will land here by Christmas.

The i30 N is far from a bad hot hatch, in fact it’s a fan and industry favourite and so there are high hopes already emerging for the Kona N.