Bentley has long been one of the most desirable luxury brands on the planet, with a storied history of plush and powerful models including the Continental, Mulsanne, Arnage and even the Bentayga SUV.

Following on the heels of the all-new Continental first revealed in August 2017, Bentley has lifted the lid on its mechanically related, third-generation Flying Spur sedan, which ups the technology and luxury over the outgoing model. 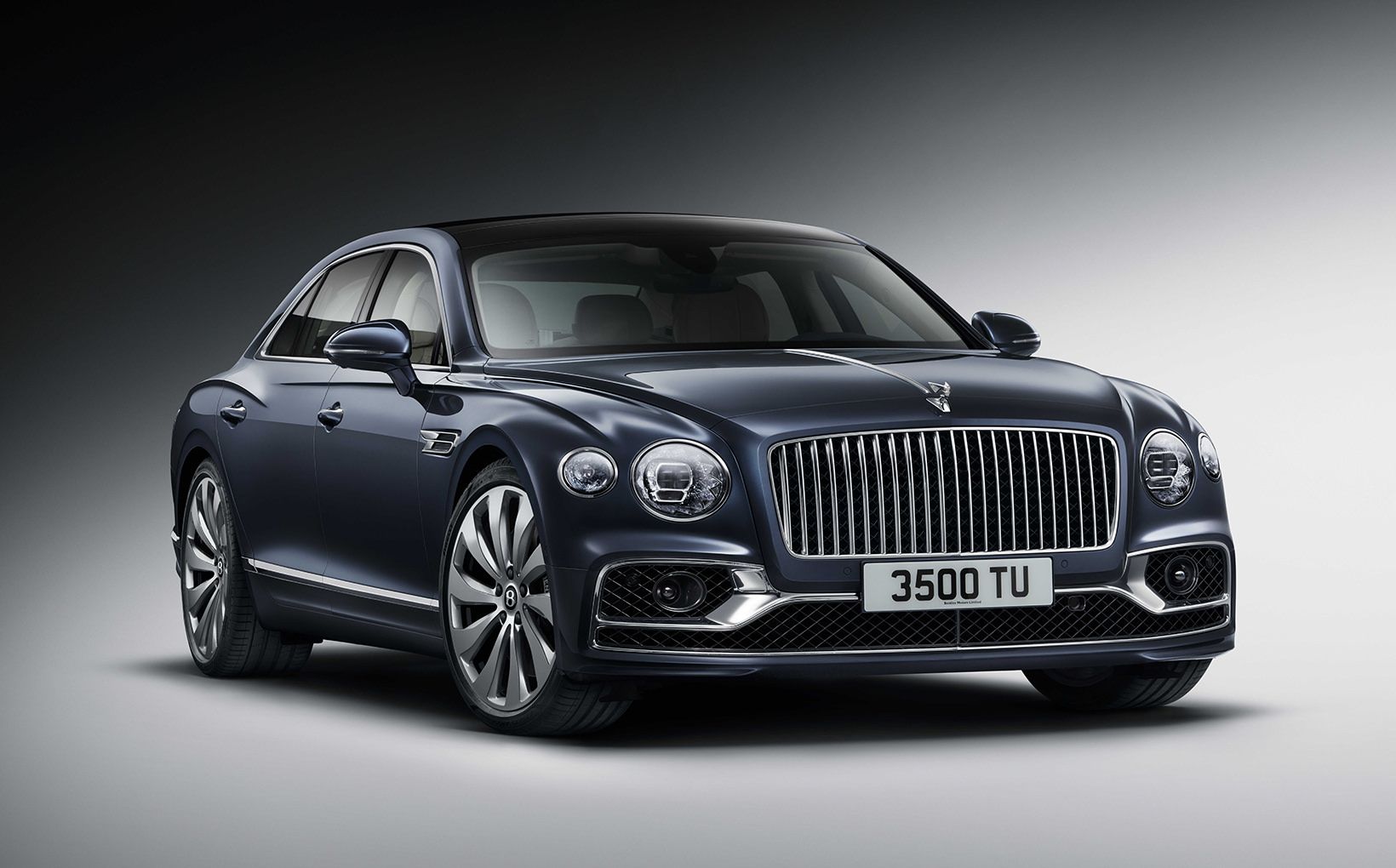 While styling may appear to be fairly similar to its predecessor, underneath there are significant changes, with the Flying Spur riding on a brand-new platform that increases wheelbase length by 130mm to provide an even more imposing on-road presence.

The twin circular headlight design carries over, however the new Flying Spur scores fancy new LED matrix headlights with a crystal-cut detailing effect. After all, it’s the finer details that make a luxury car.

Matrix LED headlights enable the driver to keep the main beam on at all time, and uses cameras to detect other road users and dim the lights around them to avoid dazzling.

Crystal-cut matrix LED headlights are one of the Flying Spur’s new technological features.

At the rear, the Flying Spur’s wraparound LED tail-lights evoke a ‘B’ graphic denoting the famous manufacturer, a shape also seen inside the cabin on the centre console air vents.

Character lines flow over the Flying Spur’s front and rear wheelarches, helping to give it a more purposeful stance that is aided by a range of standard 21-inch wheels, which can also be optioned up to 22 inches through the brand’s Mulliner customisation program.

Bentley’s signature Flying B hood ornament is available on a Flying Spur for the first time, while a gloss-black radiator matrix helps the vertically louvred front grille stand out. 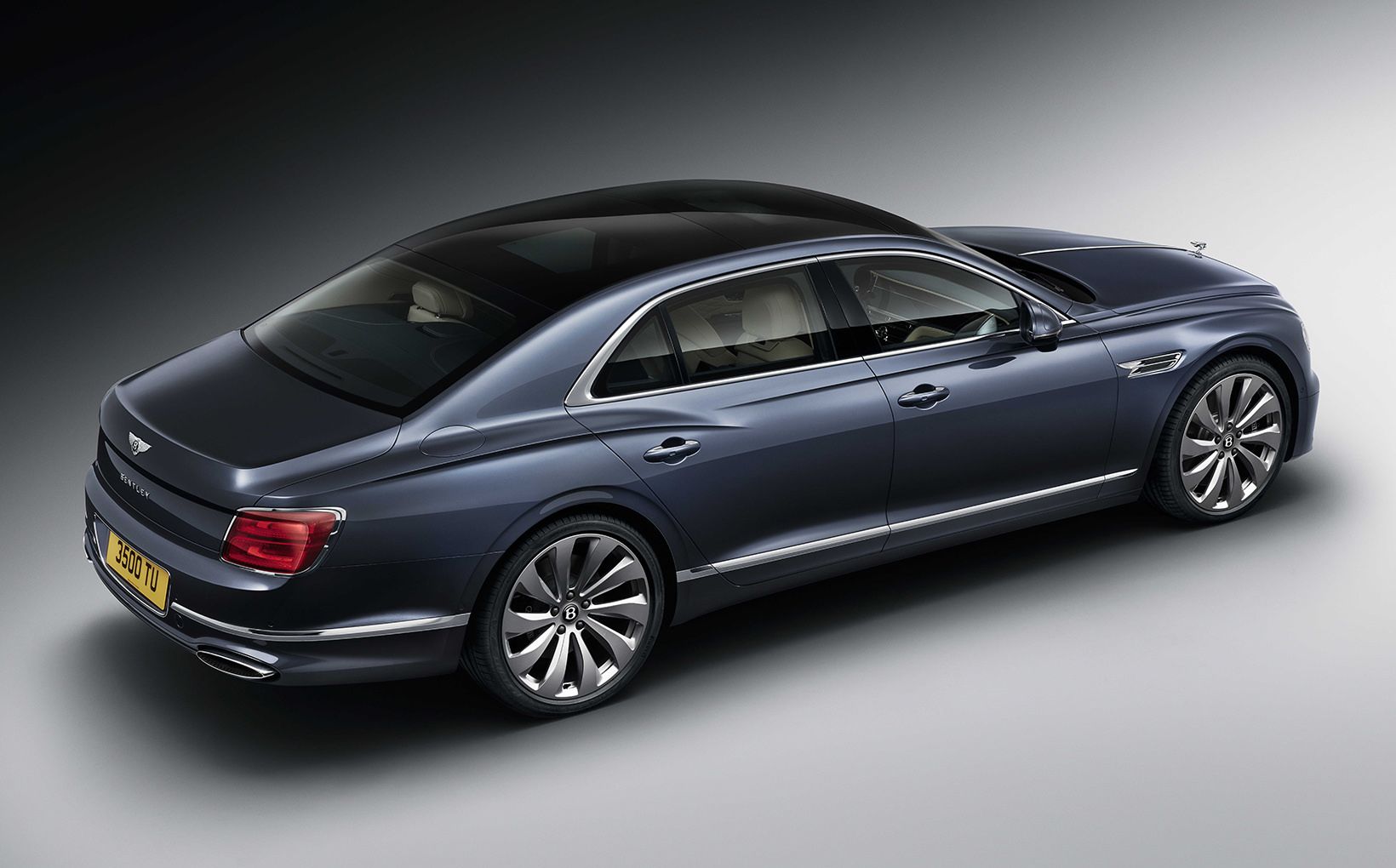 The third-generation Flying Spur rides on an all-new platform that extends the wheelbase by 130mm, with a total car length of 5316mm.

Powering the Flying Spur is an updated version of Bentley’s 6.0-litre twin-turbo W12 engine, which now pumps out 467kW of power – up 7kW – and a massive 900Nm of torque, an increase of 100Nm over the old model.

All that shove helps to propel the 2437kg Flying Spur from standstill to 100km/h in just 3.8 seconds, and on to an impressive top speed of 330km/h.

Power is channelled to all four wheels via an eight-speed ZF automatic transmission, with a new drive system that forgoes the previous model’s 40:60 front/rear fixed all-wheel drive for a variable system that typically employs the rear wheels only but can introduce power to the front wheels as road conditions and traction demands. 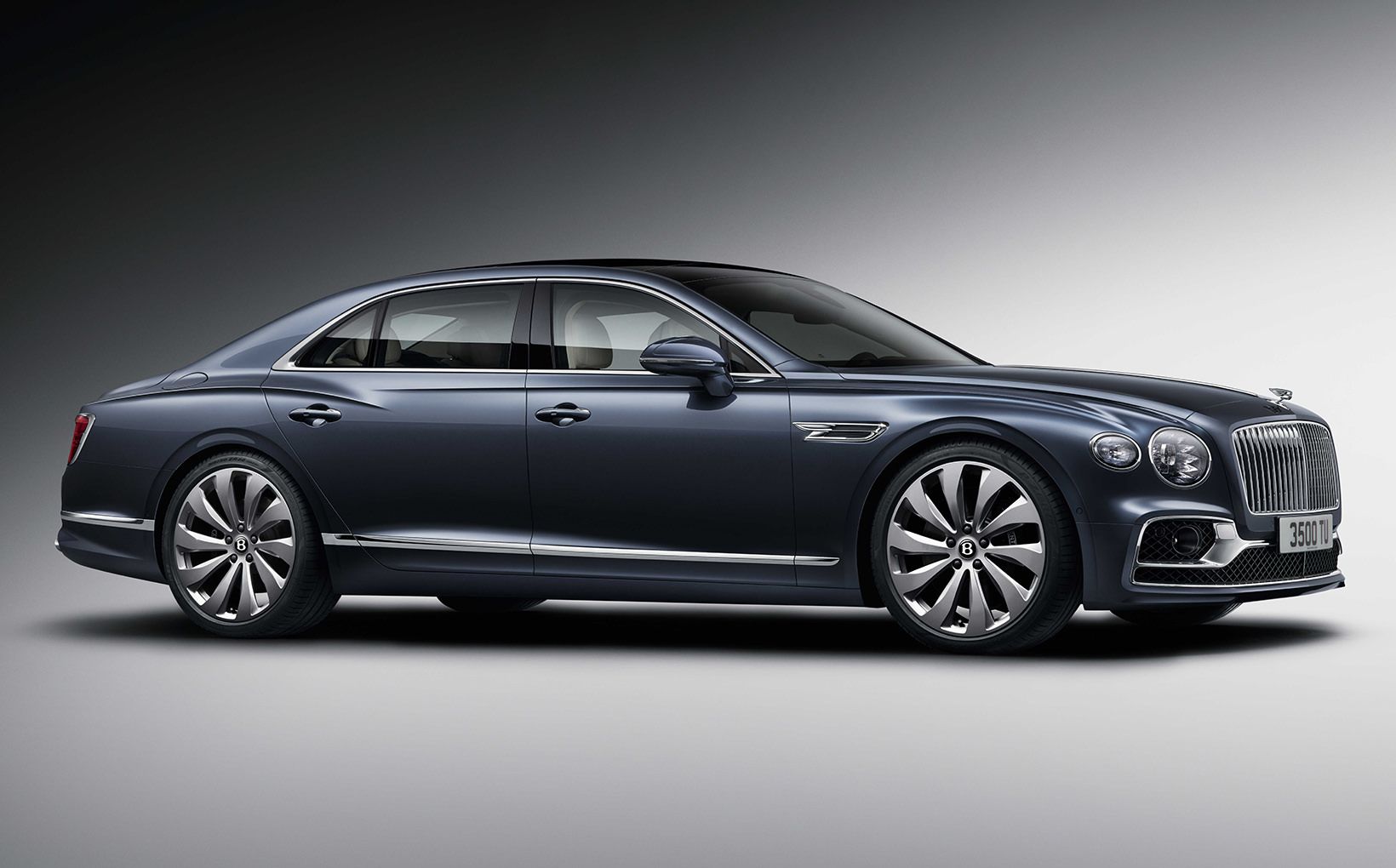 If the Flying Spur follows the Continental, a 404kW/770Nm 4.0-litre twin-turbo V8 engine will also likely be introduced at some stage.

To offset the larger wheelbase, all-wheel steering is introduced for the first time, while ride comfort is ensured with three-chamber air suspension with active damping, ride height sensors and 60 per cent more air volume than the previous model’s dampers.

Inside, the Flying Spur scores a 12.3-inch infotainment system, and for those who prefer their cabin to have a more old-world feel, the screen can be hidden by a veneer that stretches across the dashboard, and can be optioned in crown cut walnut, dark fiddleback and piano. 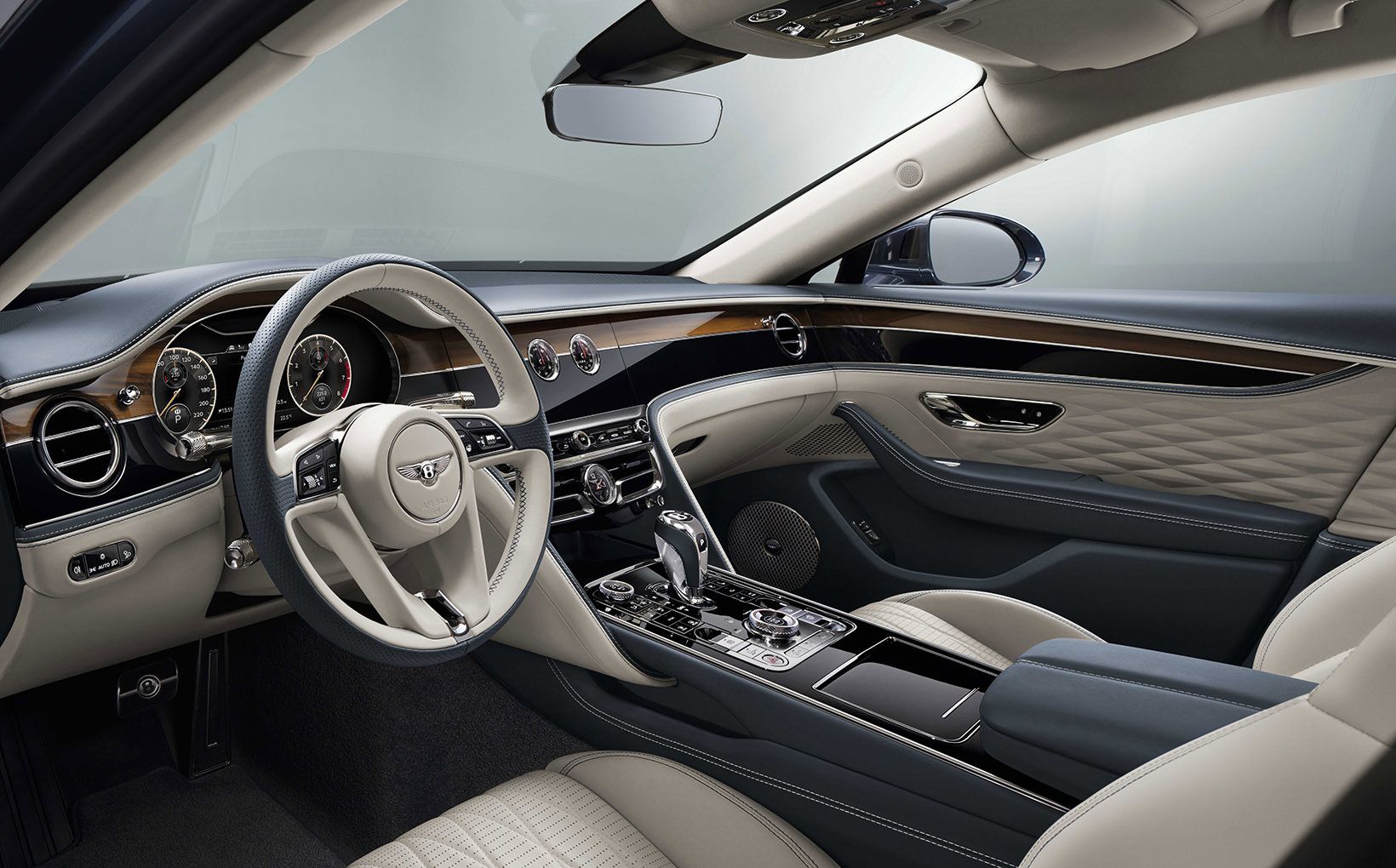 Fifteen different colours are available for the leather seats which feature heating, ventilation and massaging functions, while diamond-quilted leather is applied to the door trims and diamond knurling is used on the centre console’s rotary dials.

Rear occupants can set the climate control via a digital display, while audiophiles are treated to three different audio systems, topped by a 2200-watt, 19-speaker Naim audio system that will surely prove unpopular with the neighbours. 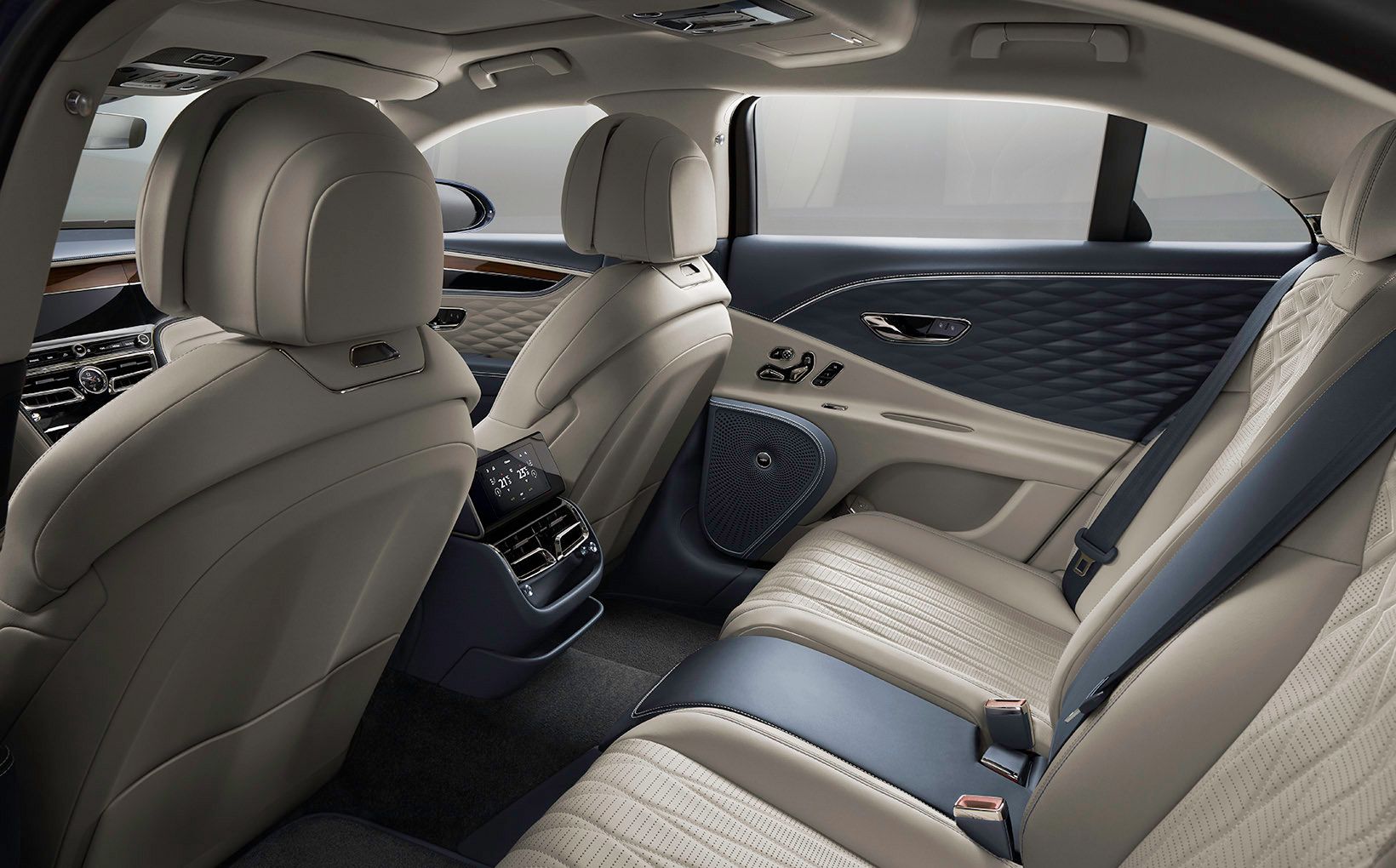 Whether sitting in the front or rear pews, a comfortable and roomy driving experience is ensured.

Pricing and specification is yet to be announced for Australia, however customers can expect an asking price above the $423,160 (plus on-roads) for the current W12 version.

To mark its release, Bentley has also revealed a First Edition version of the Flying Spur, which will be limited to 12 months of production starting from the end of this year.

Whether sitting in the parking lot at the polo club or rolling through the leafy streets of Toorak or Point Piper, the Flying Spur is sure to make its impression felt, nearly as much as on its owner’s bank balance.

Protect your Bentley Call Shannons Insurance on 13 46 46 to get a quote today.