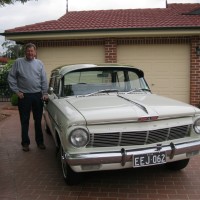 The EJ spent almost its entire life in the Singleton area of NSW. It was stored on blocks in a garage for over twenty five years before being resprayed by its second owner. The resprayed partly finished project was again put into storage before being purchased by a Newcastle buyer in 2006. This buyer reassembled the car and kept it to display at motor shows only Financial difficulties forced the car to be sold again in 2008 to another Newcastle buyer. I purchased the car from that buyer who had developed ill health six months after buying the vehicle.
The vehicle was trailered from Newcastle to our home before the changes I wished to make to the vehicle commenced. This EJ is an very early built 1962 model out of Sydney with a Chassis No.EJ225. 65S.

Since purchasing the EJ I have carried out the following:-
Removed the wide wheels and fitted standard rims with white wall tyres.
Fitted Spats, Sunvisor, Rear Window Venetin Blind, Weathershield to the Drivers Window, Scratch Plates under all door Handles, Mud Flaps, Head Light Grill Covers Interior Carpet. Although the motor had been reconditioned twelve months prior to my purchase a big end went and at that time I took the oportunity to paint the motor the correct Holden grey ( was a light grey ) and Engine Bay. The interior trim ((Harlequin & Curio Green with Feathertop Grey ) of the vehicle was in extremely original unmarked condition. Electronic ignition was fitted some 12 months ago but failed just recently. Points have been reinstalled until such time as a warranty claim for the electronic device is finalised. The most recent project was to clean down the underbody and spray it. at that time the grill was removed and dismantled to allow for the uprights and area behind the grill to be sprayed black ( uprights were painted Atherton Ivory upon purchase ). 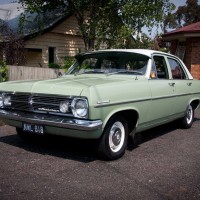