Originall used as a Tip Top bread van, saw it dying under a big pine tree on a friends neighbours farm house in Mypolonga S.A. The wife took a liking to it, took 3 years of asking the neighbour to sell it to me. Paid $3000 October 2012, Trailered it back to Adelaide and immediately had it sandblasted and metal & primed to stop any further rusting. For the last 18 months has been at Marque Restorations for a comlete restoration, so far chassis and motor have been reconditioned and restored. Expect to be finished by September 2017.

Full restoration to original specs except strengthening of cabin around rear doors ( a weak point when hanging rear doors). original drivers seat ulpholstered in leather with matching rear bench all with seat belts. 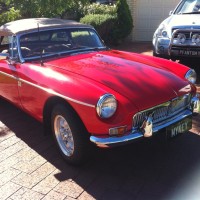