This slat grilled Willys Jeep's chassis was cast in September 1941 and the vehicle completed on 19 December 1941. She is noted in the Australian Vehicle Records at AWM as being imported in 1942 but also has BRT next to her which implies she was originally part of the British lend lease arrangements. It is therefore possible she was in the desert for a short spell and brought back to Australia by one of the returning Divisions. Either way she was registered in Queensland and during WW2 had three engine changes so she was clearly worked hard. The Registration sheets have nominal information but there is an intriguing entry TREI. I am struggling to identify what this is and it may be Tactical Radio Evaluation and Intelligence. There were radio E&I units based in Qld throughout the war. I'd be interested to know as it will give me abetter understanding of her journey. If she was attached to any of the militia outfits she may well have gone to Bougainville, My hunch is 5th Division, but it literally is only a hunch with very little evidence. It would be great to restore her paint scheme and apply the correct TAC signs.
Her original Australian registration was 160905. Her chassis number is 104825.
She was sold by the Army in 1961.
I found an article from Jeep News Qld in 2011 where she was put up for sale after a restoration. At that point she was fitted with a radio mast mount and a desert cooler. They were no longer attached when I acquired her so it is difficult to tell whether they were wartime additions or part of the restoration. unfortunately the original owner has passed away so I am unable to ask.The cooler may suggest the vehicle came out of the desert with returning Australian forces and if original the radio mast mount may confirm my TREI theory.
The last owner added a machine gun mount which needs to be removed.
She runs well but is tired and body worn and needs a new paint job. 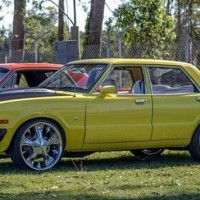 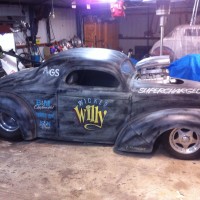