This car was initially sold to Tamworth in NSW, there is no evidence of it ever having a rear seat or seatbelts fitted.
The car was sold to a funeral home and was converted to a hearse, the car was repainted black with a gold pin stripe.
In approx 1980-81 my wifes Uncle George bought the car with plans of opening a cheap price funeral service in Alice Springs.
My understanding is he had backing and approval to do this, so he bought the car and drove it back to Alice (there where receipt stubs in glove box for tourist attractions at Parkes, Renmark and along the Murray river.
Once he got back to Alice and contacted the backers, they had changed there mind and decided there was no room in Alice for a second funeral service, so Uncle George always being ready with a new plan, became the local DHL rep and used the vehicle for deliveries.
At some point in time the black was painted over with another coat of the original Fountain Blue, I dont know if this was something George did or was done before he picked it up from Tamworth.
Sadly Uncle George passed away and myself being the only Valiant car guy in the family, was offered the car, to which I happily did.
The car was originally a drum braked, 3 speed column shift manual with 215 base engine, I decided I would keep "George" (as the car has been nicknamed) and use him for towing my Cobra to race events, to do this I converted him to disk brake front, added 318 V8 with column shift auto (I love a bench seat), power steering and air con. 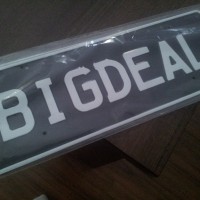