The Story of V V 561
V V 561, the registration number, was a 1931 Austin 7, 2 door sedan (saloon in England) called Vee Vee. It belonged to my father who lived in Cornwall in England. He bought it in 1941 to replace his Morris 10/4 which was hit by an army trailer that had broken away from the truck.
The Austin 7 engine had only a two bearing crankshaft, (no centre bearing). The car was tiny, so short in fact that the front door was cut away to fit around the rear wheel mudguards. In the following year or so on the next model, the wheelbase must have been made longer as the door was more square without the cut out.
He drove Vee Vee to work every day during the war as he worked in a shipyard in Plymouth, Devon, about 20 miles away from home. He repaired the big guns on Royal Navy ships when they came in for a refit or repair. One day the shipyard was bombed and an incendiary bomb hit the car and went right through the roof and out of the driver’s window without exploding.
At the end of the war he was delighted to be able to remove the headlight grilles and repaint over the white painted mudguards, both which were stipulated during the war.
I was nearly 9 years old when the war ended so we were able to use the car for pleasure if we could get enough petrol, as it was still rationed. I used to sit in the passenger seat and change gear and work the foot-operated dip-switch. When it needed more petrol I had to hop out of the car and lift up the seat as the fuel tank was under my seat. VeeVee had no ignition key, just a switch; the starter button was on the floor between the seats and the battery under the back seat. The car was tiny, but carried my parents and me everywhere in spite of some of the 1:3 hills which are common in Cornwall. It had a top speed of about 45 miles per hour and it needed to go flat out at the bottom of some of the hills to get to the top. Everything vibrated and shook in the process.
I used to get told off when I sat in the car and kept playing with the two levers on the steering wheel; I didn’t realise they were needed to be carefully set as they controlled the advance and retard of the spark and the mixture to the carburettor.
When I was 11, I went to a boarding school. It was only 50 miles away but it took most of the afternoon and evening to get there. I had a big trunk with my school uniforms and clothes which was carried on the fold-out luggage rack on the back of the car. The trunk was almost as wide as the car and very heavy; probably the front wheels were only just on the road going up hills!

On one trip one of the front brakes overheated and the grease in the wheel hub caught fire when going down a long hill to a river ferry, so when the car was on board the ferry, Dad got a bucket of water from the river and threw it over the front wheel to douse the fire! We continued on our journey quite confidently.
One day my parents bought a 9 foot 6 inch wooden rowing boat and the only way to get it home was upside down on the roof of the car. It was duly lifted up and tied down with the ropes though the open windows so we couldn’t open the doors. The boat was as long as the car it seemed. On the way home we ran over a dog; the poor thing was thrashing around under the car and we couldn’t open the doors to see to it until all the ropes were undone. Eventually Dad was able to get to him and release him and the dog trotted away, apparently none the worse for wear.
We lived in the country and we had no vehicle access to the house so Dad used to park Vee Vee in a paddock behind the house, separated by a deep Cornish lane. He went to get the car one morning and found it on its side in the lane. It had obviously run down the slope, crashed through some bushes and dropped probably 15 feet onto its nose before tipping over. He was devastated as we didn’t have much money to get it fixed.
It sat in a neighbour’s shed for a long time unrepaired. Eventually I persuaded him that it was worth trying to patch it up so with only a few hand tools, a couple of big hammers, a Spanish windlass to pull the door pillars back into line, he got it back into a driveable condition. The impact had broken one of the engine bearers on the aluminium crankcase but he was able to get it professionally welded.
He kept Vee Vee for another 10 years or so. He was a representative for an advertising company; his territory was the whole of the south of England, from Penzance to Brighton and across to Gloucester, a huge area which he had to cover every six weeks which he did in this amazing little car. The speedometer only went up to 99,999 so goodness knows how many times the clock had gone around.
At one stage in its life it developed a dreadful speed wobble, the steering vibrated the whole car so that the driver had to slow down till it had sorted itself out. My Dad eventually realised that the "Castor" angle of the axle was wrong so he made some hardwood wedges and fitted them between the axle and springs to tilt the axle back. Problem solved!
When I was old enough he taught me to drive in it; a real challenge as the clutch pedal was so sensitive. The travel of the pedal from disengaged to engaged was about one inch; I leap-frogged up the road on many occasions, much to my Dad’s disgust; “oh my poor car” he would say, very frequently! I was not a very good pupil and used to get very angry with the car but really at my own inability.

My parents sold the car in 1954 while I was away in the RAF so I really can’t remember what happened to it in the end but it was still roadworthy when he sold it. It would be worth a lot of money today.

Unfortunately I have lost many old photos but the photo above is of a similar car. 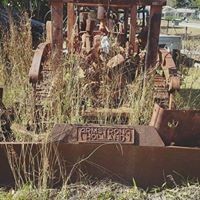