My brother bought this car as a 19 year old. He had previously owned two,1963 Chevrolets when he was 18 years old, but did not get the chance to restore them and later sold them.
He bought this 1957 Chevrolet from an importer as he immediately saw potential.
It was completely rusted out and needed a full restoration.
The car had been imported from America. It was originally from New York and as we understand, had a lot of rust as they used to put salt on the snowy roads for grip.

My brother became a father mid-restoration and the project was placed on hold for many years.
He spent many years meticulously restoring it back to its original condition including exterior paint matched to 'Sierra Gold', interior upholstery restored and a disc brake front end being fitted.
The car was used as a wedding vehicle in December, 2020, and hero photograph was taken at Adelaide's historic Sunnybrae Estate grounds. 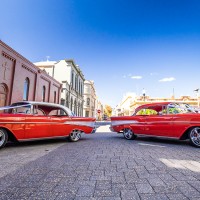