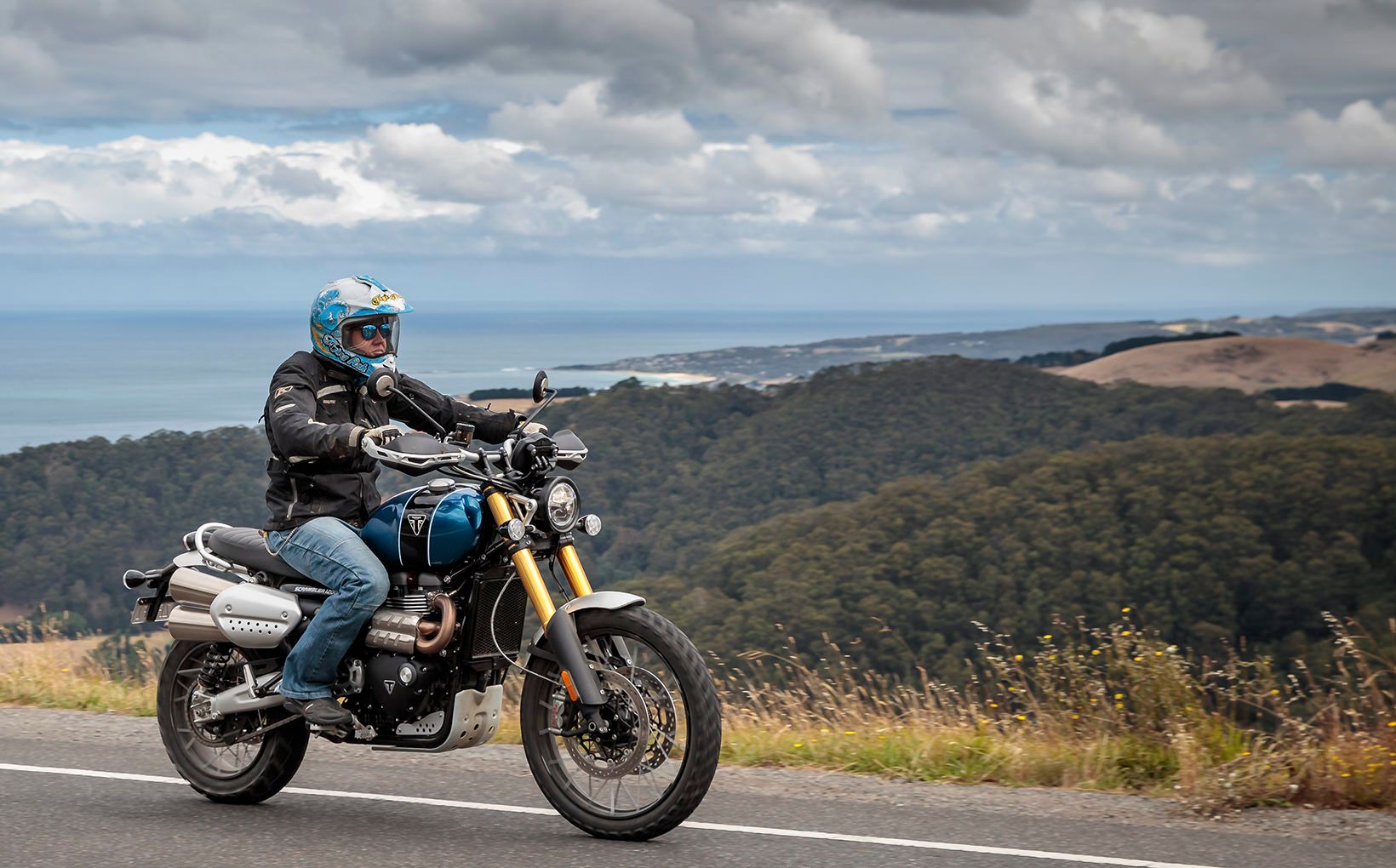 The premise of Darwin’s Theory of Evolution is that complex creatures evolve from more simplistic ancestors over time, and as a species evolves, it can indeed create an entirely new creature. This for me sums up Triumph’s new Scrambler 1200 XE. This bike is more than a simple variation of the old, it is something new.

It’s hard to argue with Triumph when it says the Scrambler 1200 XE is category-redefining. Its abilities off-road are not something we’ve seen before in this category. Let’s face it, historically, most scramblers can’t back up their promise of off-road freedom with actual offroad performance. Well, not this scrambler. It well and truly can! Triumph has made sure it can handle any situation you would normally put an adventure bike through. The XE’s on-road handling is not to be sniffed at either; even with the off-road-orientated 21-inch front wheel, this scrambler is still very good on road. So from the sublime twisties of Victoria’s Great Ocean Road to the Otway forest test grounds, Triumph’s new Scrambler 1200 XE kept impressing me.

First up, the engine. While we’ve seen the Bonneville engine used in other models, Triumph tells us this latest-generation highpower 1200cc engine delivers up to 90hp, 12.5 per cent more than the Bonneville T120 engine. Furthermore, it’s tuned to deliver high torque low down and across the mid-range, providing 110Nm at a low 3950rpm. There’s plenty of power for most situations and the torquey tune helps smooth it all out.

Add in a great feel, with a rumble you would expect from Scrambler. The soundtrack to the motor is provided by a twin high-level exhaust delivering a distinctive Scrambler note. 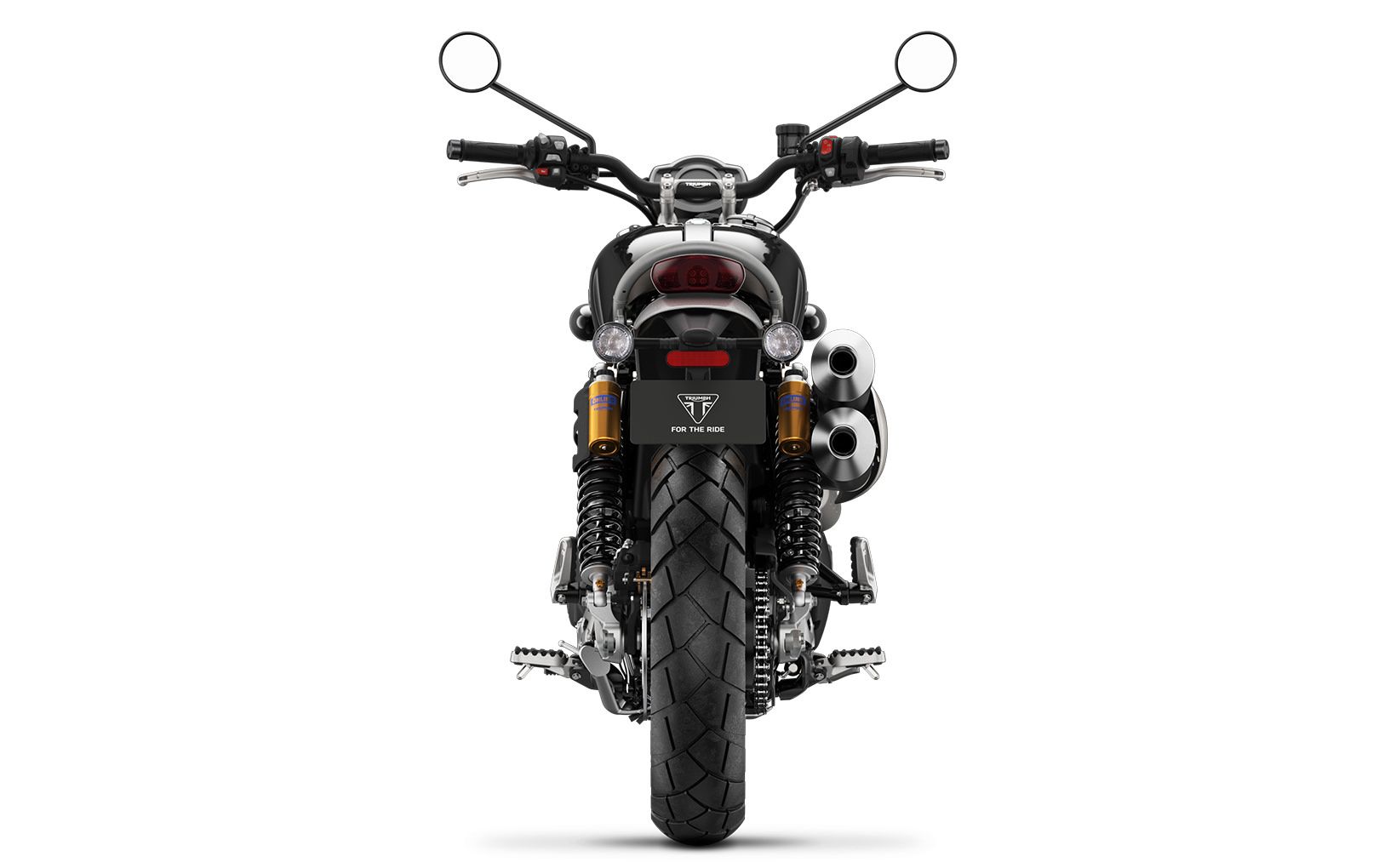 Triumph was keen to show off the XE’s offroad abilities, so they let us loose on a private off-road testing facility in the Otway Ranges. It had every type of terrain you could want to test a bike on, including rock steps, logs, sand and even a couple of decent mud holes.

This wasn’t going to be a soft off-road test. They even kitted out the bikes with Pirelli Scorpion Rally tyres. Well, it wasn’t long before the bikes were being launched up the rock steps and over the logs. The suspension is so impressive it just soaked it all up. No nasty kickbacks or wrist-jarring impacts. Even just more or less rolling over the logs, the Triumph XE’s ground clearance made it easy. This is all thanks to quality 47mm Showa long travel forks and twin spring Öhlins fully adjustable rear suspension providing 250mm travel. I was genuinely surprised by the XE’s suspension capability. It gives you the confidence to tackle most tricky situations. Ruts and washouts? No problem. Skatey loose gravel? No problem. For a large-capacity bike, it really is impressive. Of course, this is somewhat helped by the fact that it is fairly light, with a dry weight of 207kg. Also, as previously mentioned, it has a 21-inch front wheel. However, there is no denying the overall suspension package on this bike is class-leading. 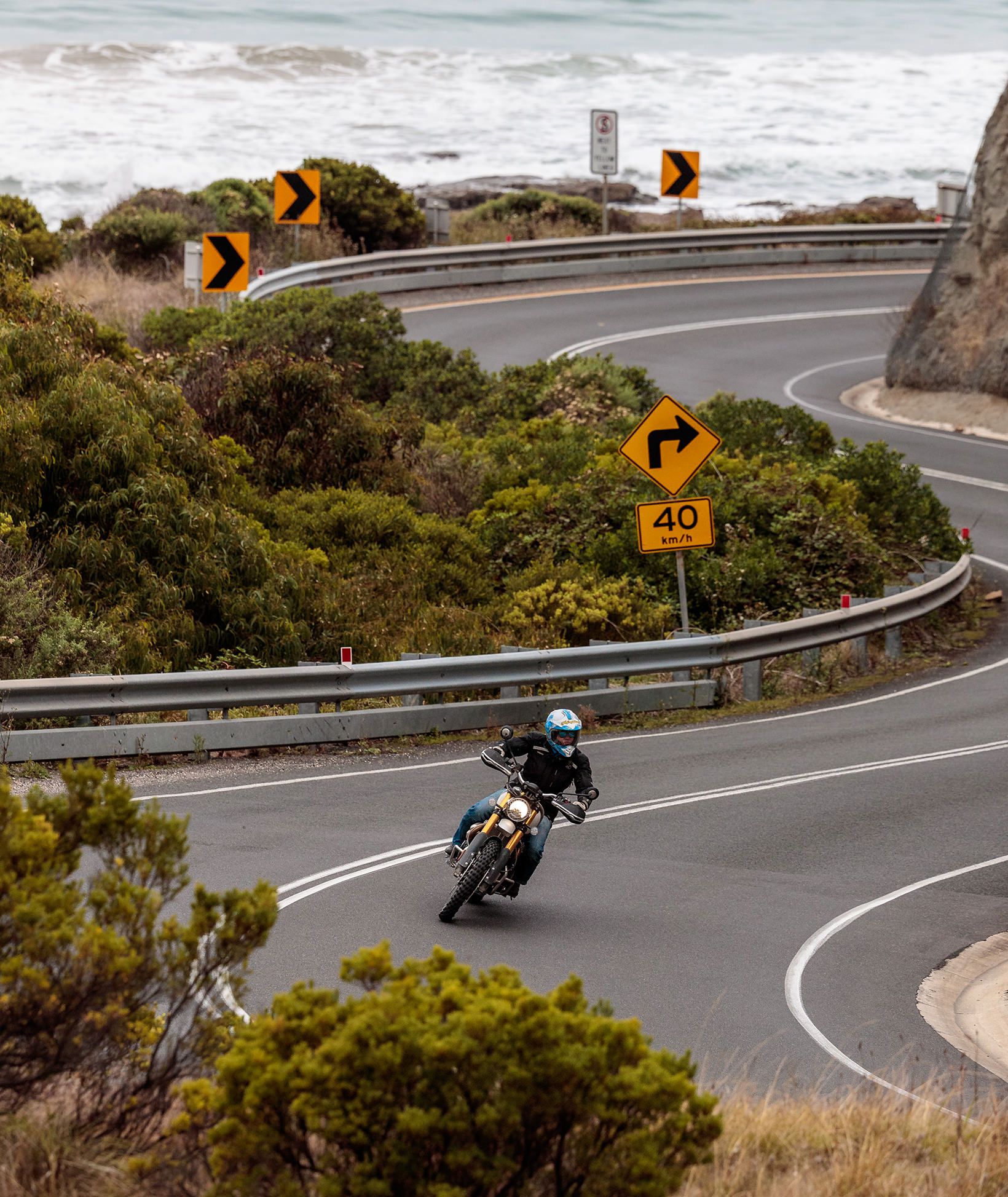 Another fundamental aspect that helps keep the high-power 1200cc engine manageable is the rider modes. Like most new-generation motorcycles these day, the Triumph Scrambler 1200 XE comes with six different rider modes. While it has the normal Rain, Road, Off Road and Sport modes, the XE also comes with Off Road Pro and a Rider configurable mode.

Off Road Pro mode completely switches off the traction control and the ABS to both wheels. What you’re left with is a raw unadulterated beast. It’s truly great if you want to let loose on a flat track, or power slide ’till your heart’s content. However, for everybody else (me included), the Off Road mode will give you more than enough rear-wheel spin before the electronics kick in. Additionally, you have the benefit of ABS active on the front wheel in this mode. 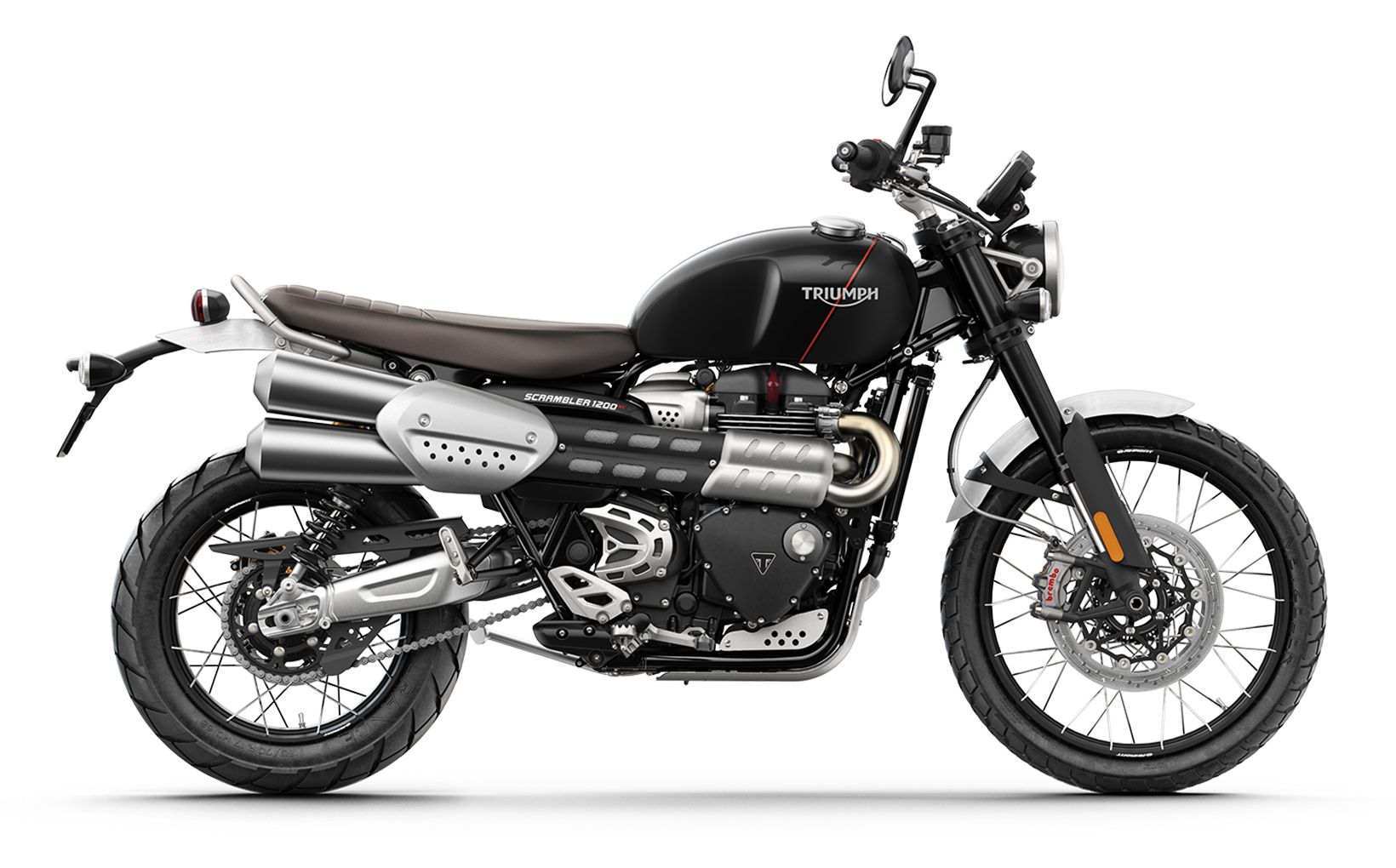 The rider configurable mode allows a nice level of personalisation to the concept of rider modes. You can select different engine maps and combine it with your desired traction and ABS settings. This is all then saved as your own rider mode. For example, you may wish to use Road Mode to ensure you have ABS for both wheels, but switch the traction control off. In the rider configurable mode these settings are saved as your preference and easily accessible next time you turn on the bike.

The Scrambler XE also comes with the added safety of optimised corning ABS, and cornering traction control both supported by an Inertial Measuring Unit (IMU). The IMU is an intuitive instrument that is constantly measuring lean angle, acceleration rates and a few other parameters, and then constantly making micro adjustments to the ABS and traction control. This is the sort of technology you would expect to find as an optional extra on leading sports bikes. You’ll be happy to know it comes standard on the XE model.

On road, the XE is as good as you would expect from a manufacturer such as Triumph. Along Victoria’s Great Ocean Road, the 1200cc engine really came into its own during our test. In Sports mode the throttle is very responsive, and the bike has some serious get up and go. I would go as far as saying that in the right hands, this bike is a match for many sports bikes. Thankfully the bike is kitted with premium Brembo M50 calipers for very good stopping power. 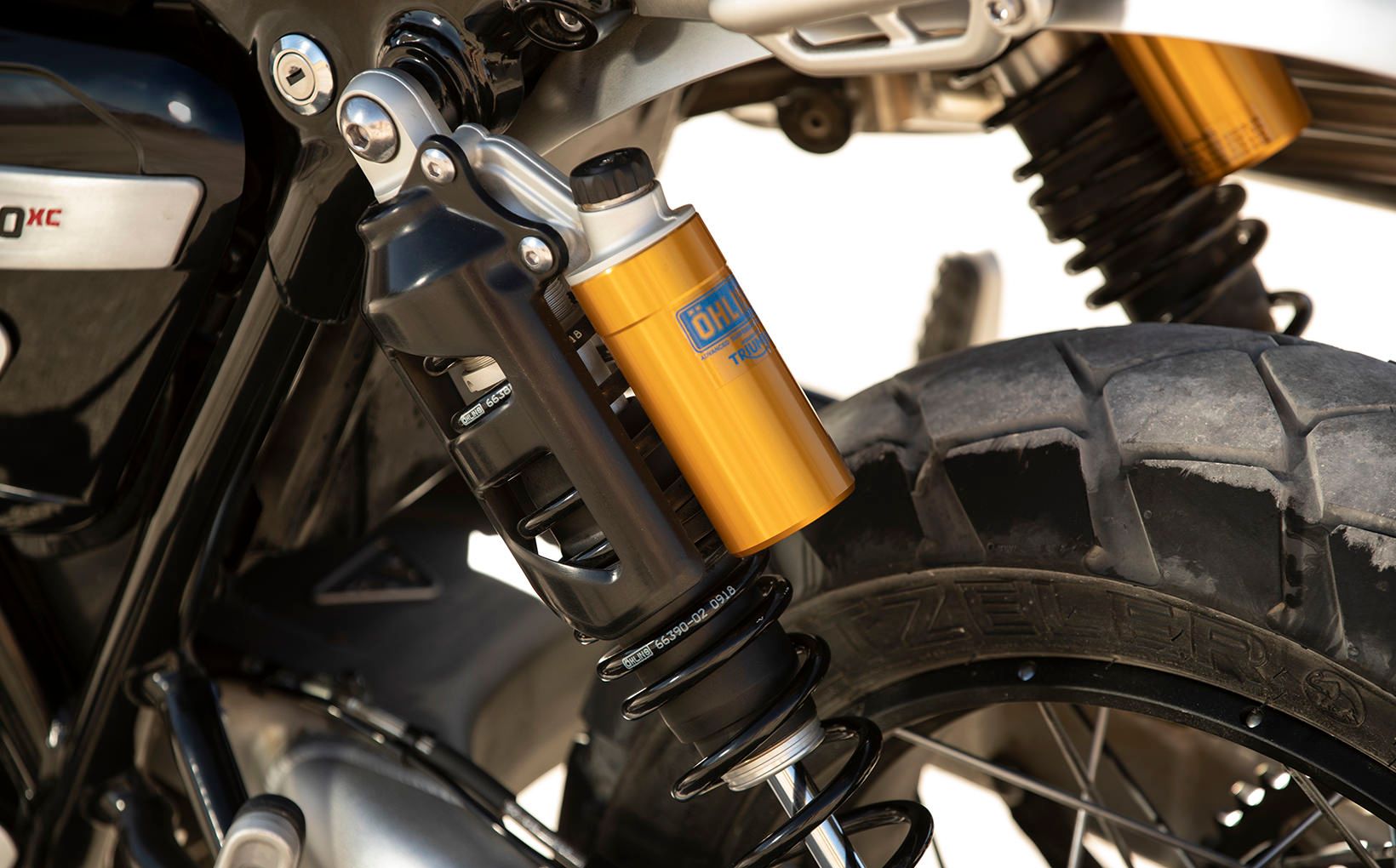 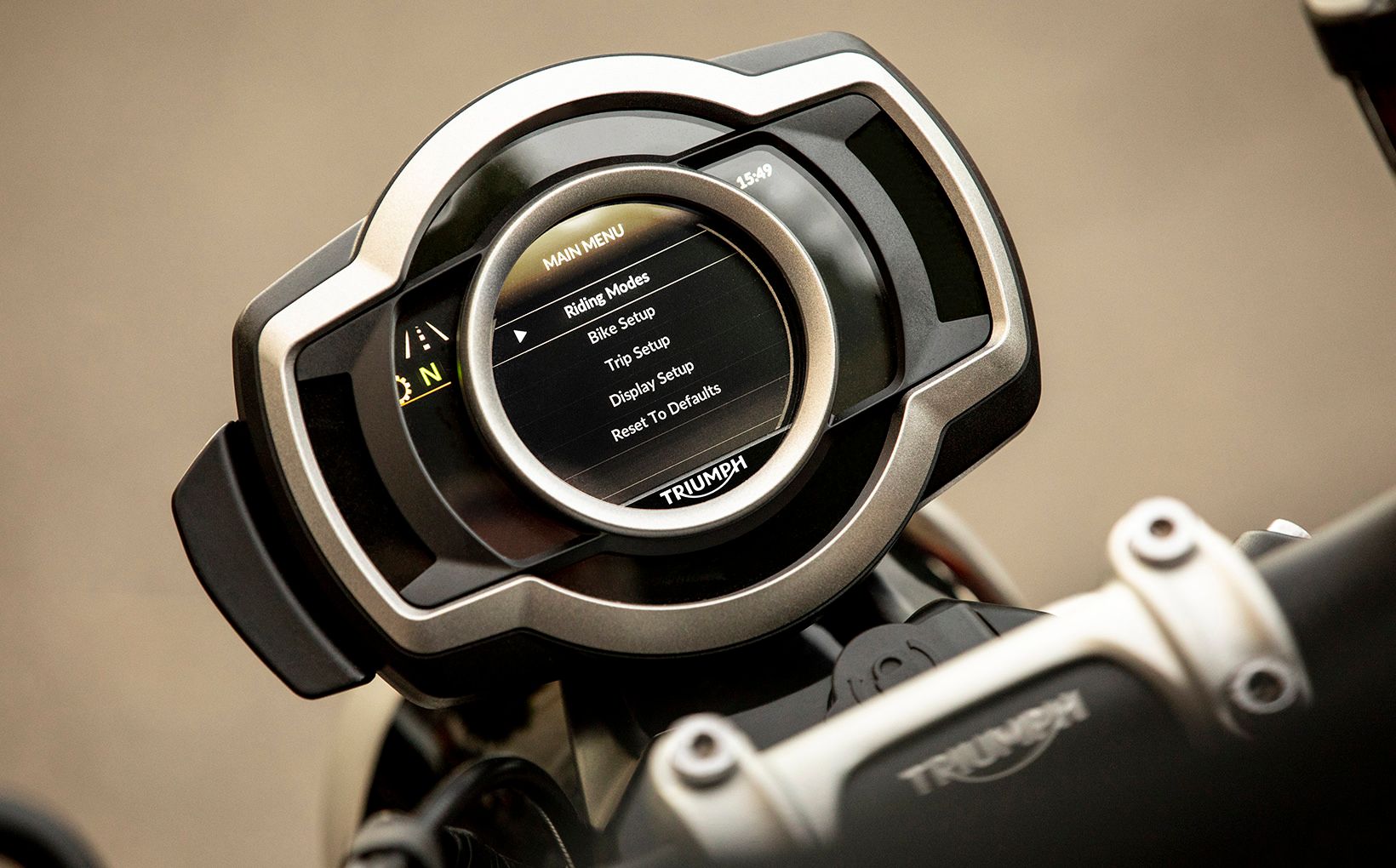 One aspect of the Triumph Scrambler 1200 that really does set this bike apart is its second-generation TFT instruments and all the additional techy wizardry linked to it. Where most TFT displays look like you have an iPad stuck to your dash, Triumph’s TFT is a thing of retro beauty. It looks like an analogue instrument cluster, however it operates and has functionality far beyond what you would expect at first glance. From the claimed world-first integrated GoPro control system to a Google-powered GPS system, and even integrated phone and music operations, this TFT has it all. Of course, the secret to a lot of this is the connectivity to your phone through the Triumph app. Yep, it would appear there truly is an app for everything these days. Jokes aside, the fact that the TFT can utilise your phone for some of its functionality, and then display this information on the TFT, is actually pretty clever. 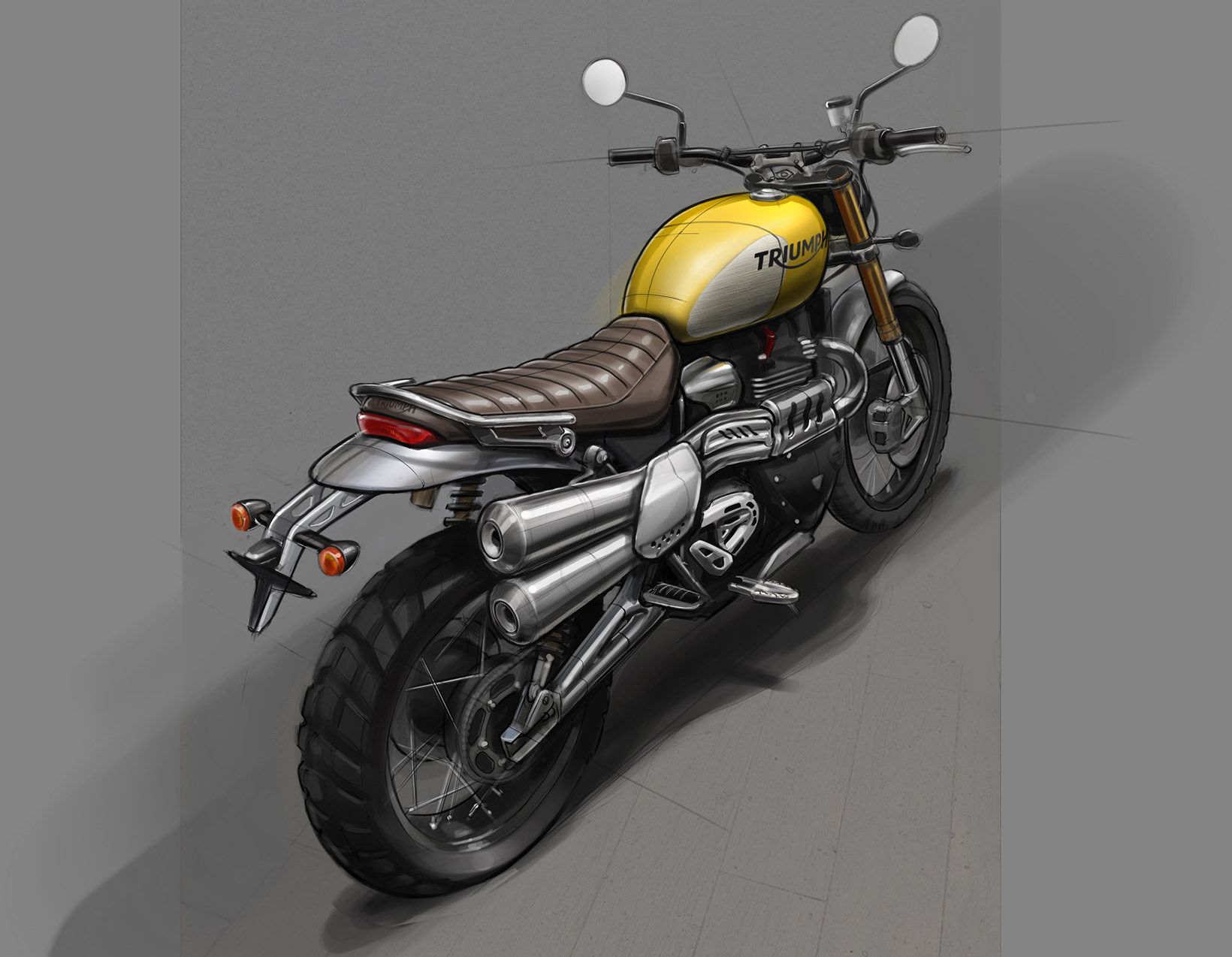 Like many other areas of this bike, the TFT can be customised to suit the rider. You can even program a personal message to be displayed on the start-up screen. While this is a bit gimmicky, I do like the level of personalisation available. There are two information layout themes you can switch between in the TFT, and you can even further personalise these layouts to suit yourself. Navigation of the TFT is surprisingly intuitive through a five-way joystick located on the switchgear. In fact, both switch blocks have been well thought out and are ergonomic to use.

Style wise, the Triumph Scrambler 1200 has kept to its ancestral DNA. While this is a modern-era Scrambler, its iconic looks are unmistakable. The high straight pipes, the twin rear shocks with piggy back reservoir, and the metal tank all link to its 1960 family tree. However, alongside all of that is its modern-day evolutionary steps. The riderfocused technology underpinning this bike is class-leading and includes some variations we just haven’t seen in the Scrambler world. In addition, it’s finished off with quality extras like LED lighting, side-laced wheels for tubeless tyres, lots of brushed aluminium parts and keyless ignition. 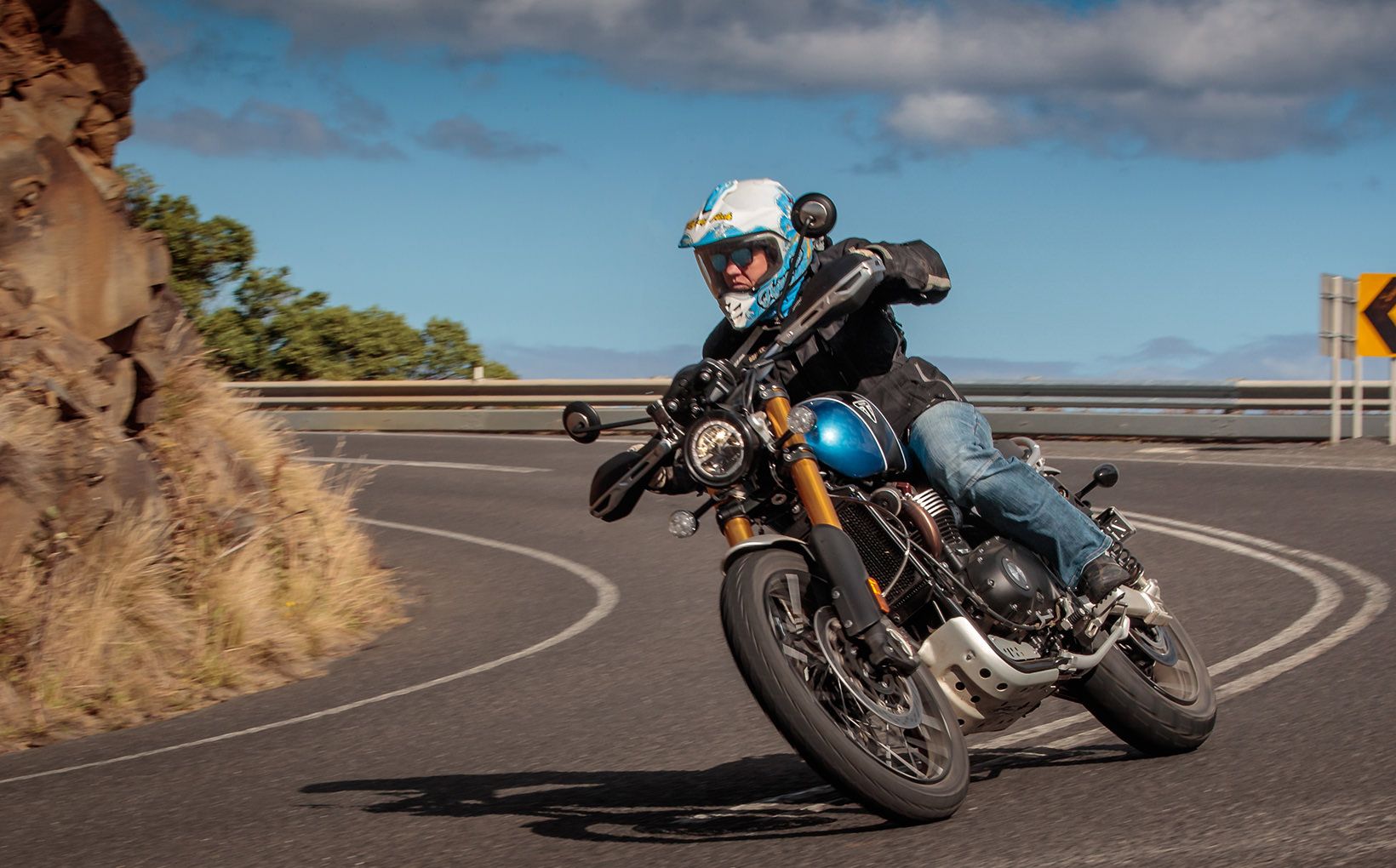 Of course, no bike is perfect and I had a few little niggles, primarily that the exhaust was rather warm against my leg. But I guess that’s par for the course having high pipes, and it’s nothing I couldn’t live with.

It’s worth mentioning that alongside the XE model, Triumph has also released the Scrambler 1200 XC model. The XC is more road-oriented and therefore less suspension travel (200mm travel) and a few less electronic rider aids. The lower suspension may suit some riders because at 870mm the seat height of the XE is rather tall. 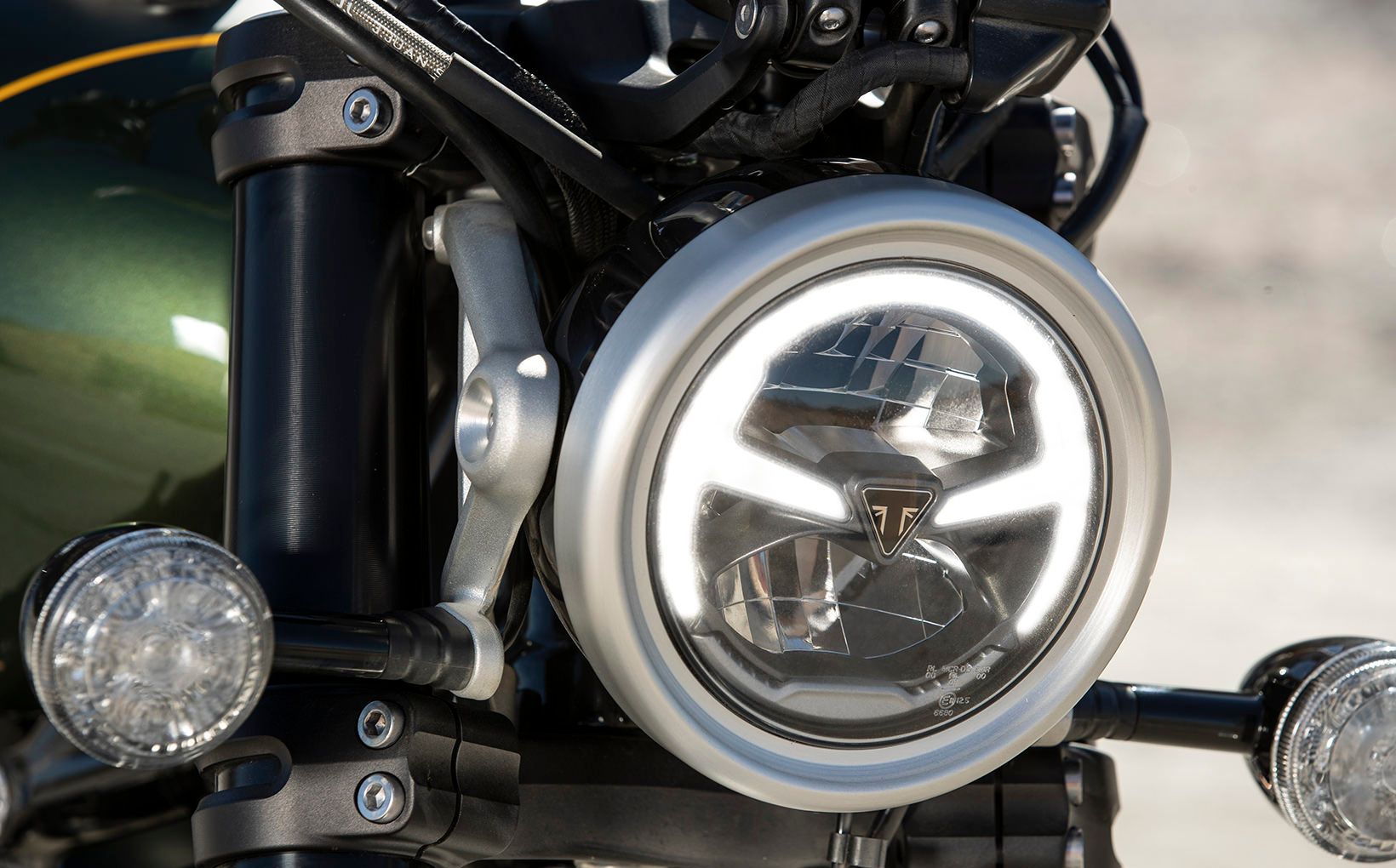 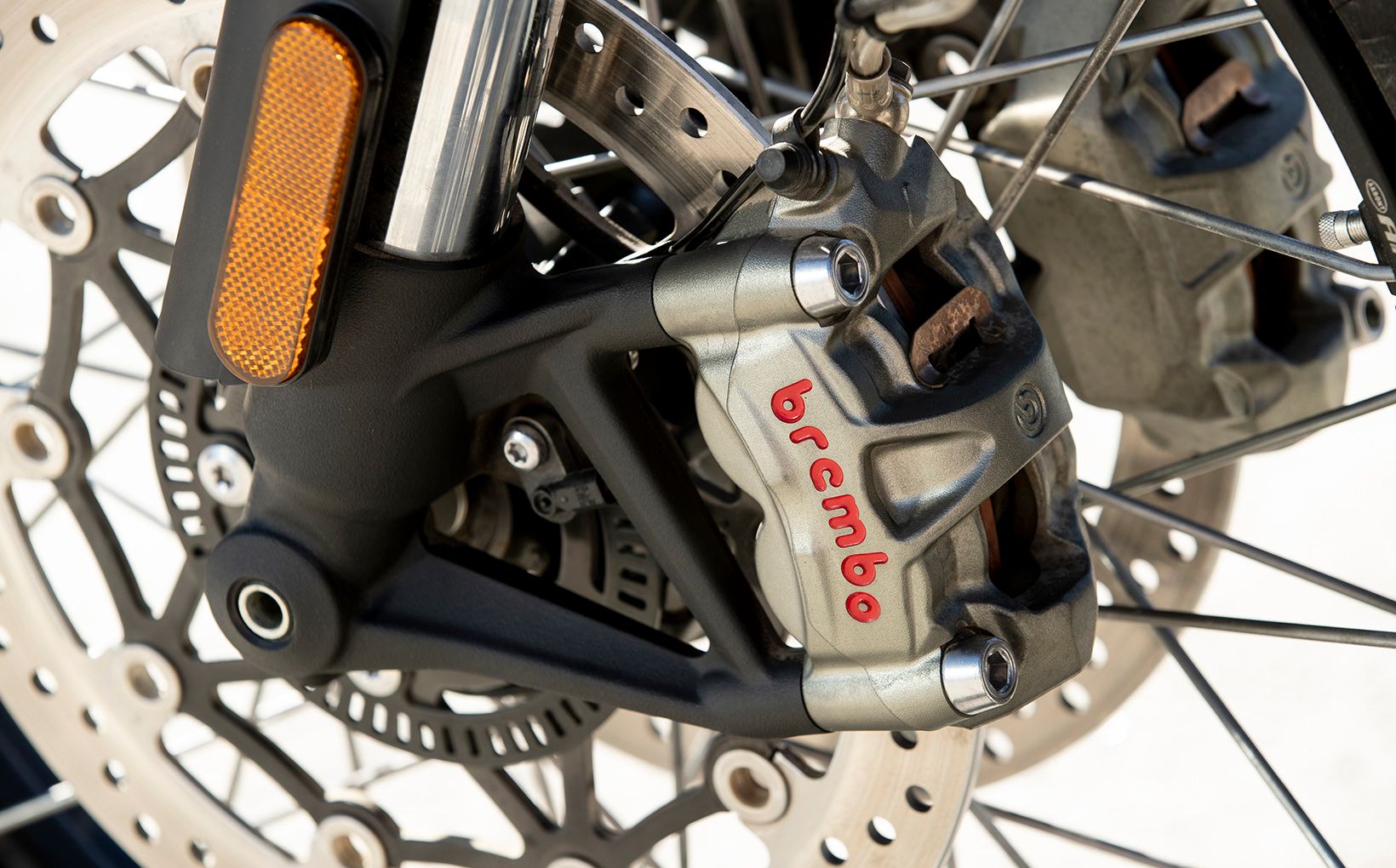 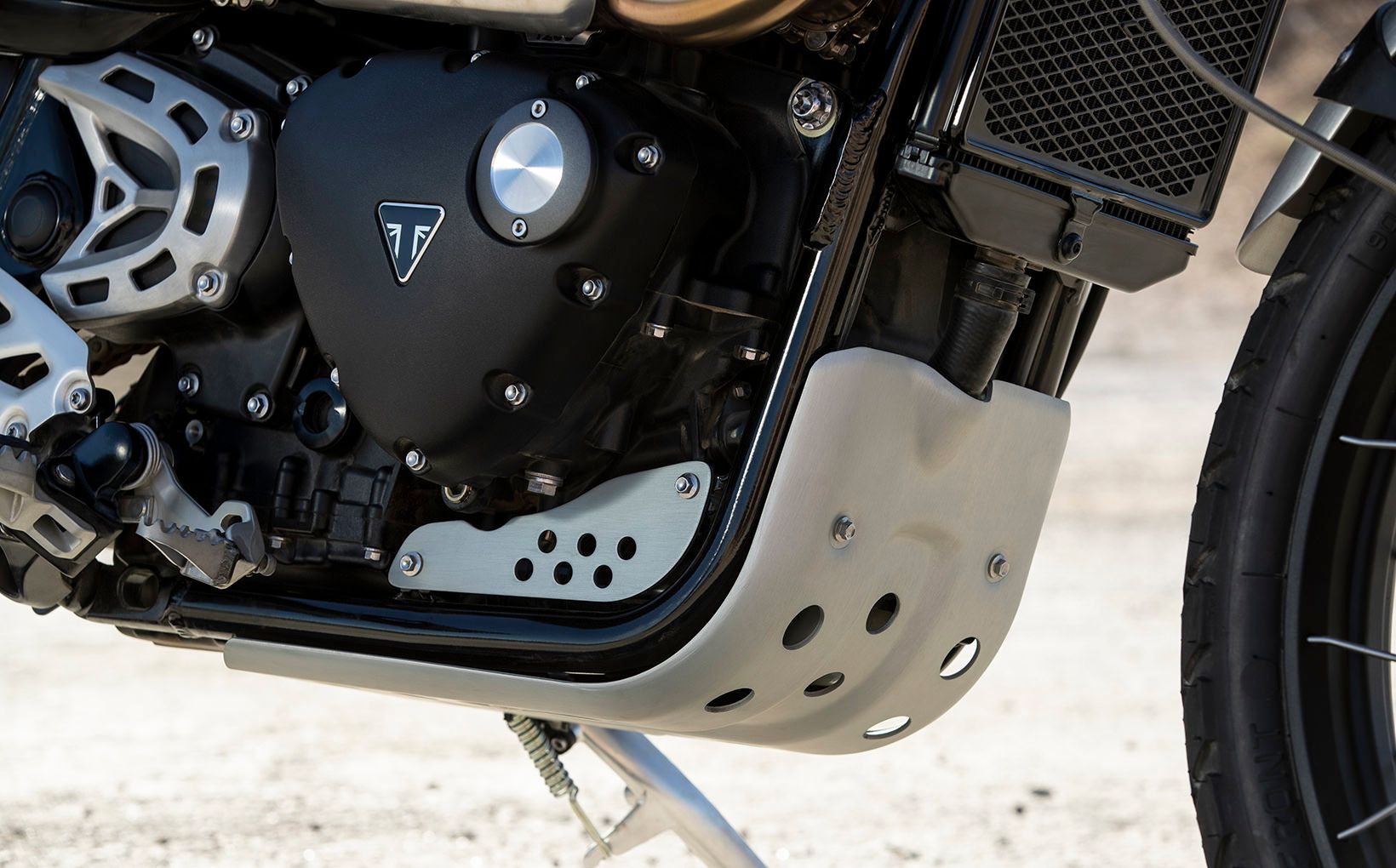 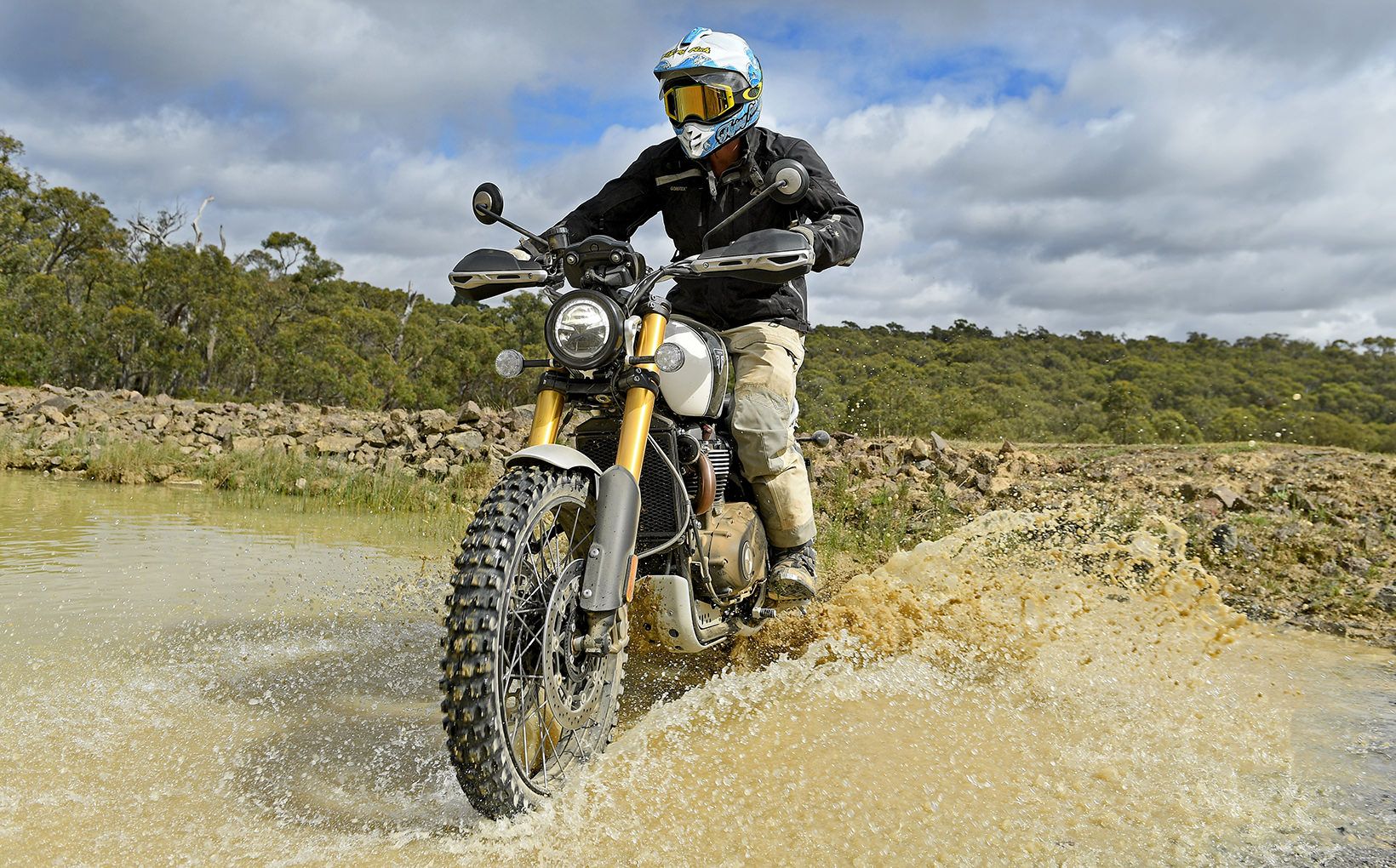 The new Scrambler 1200 XE really is in its own category. It’s not trying to be s longdistance Adventure bike. Sure, the XE is extremely capable off road, and many of the features would suggest it’s headed that way, but there is still something so urban about it. In every respect it screams “Scrambler”. It’s cool, it’s iconic and it exceeded my expectations in every way. 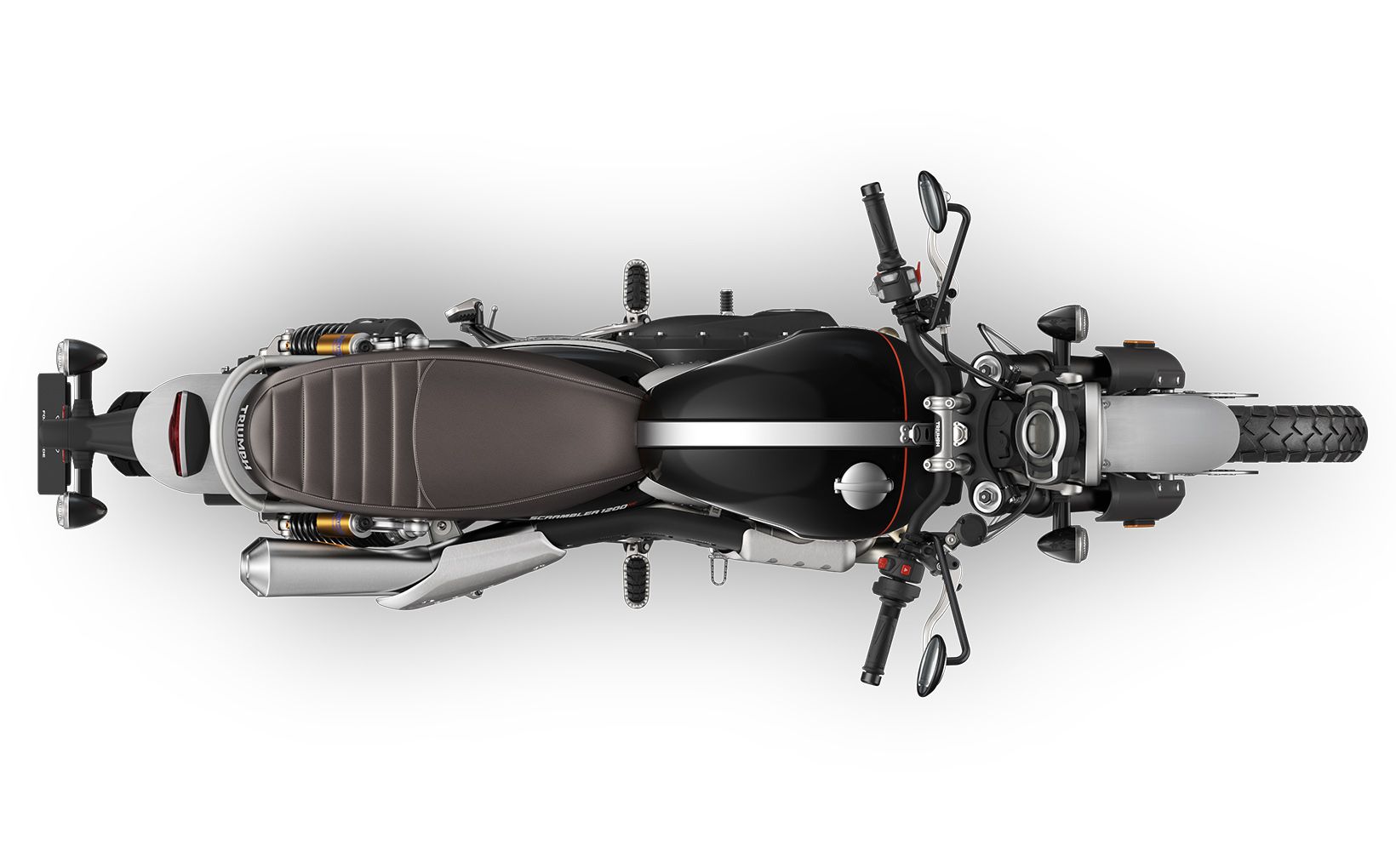