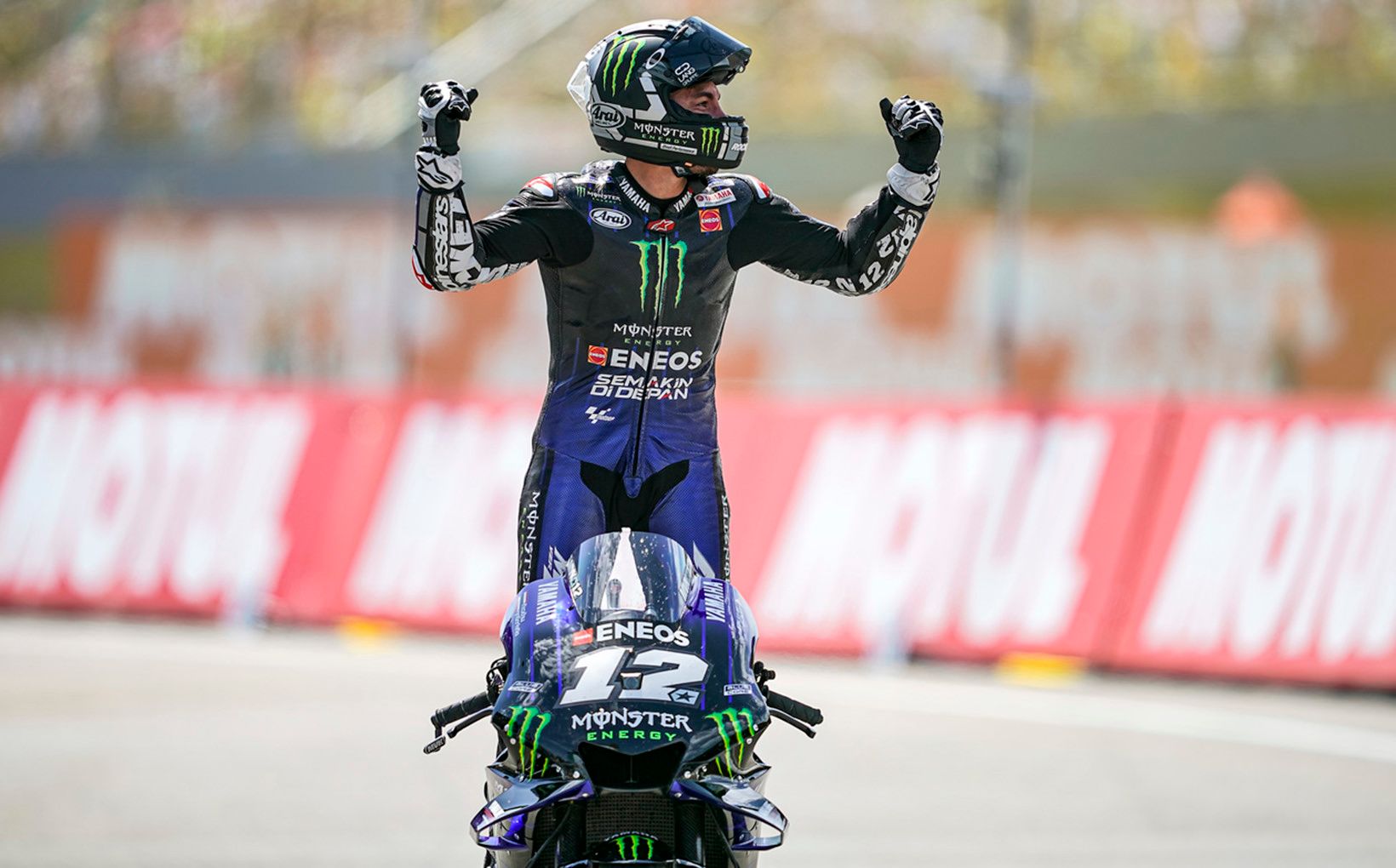 The Dutch TT is always a race for the fans to enjoy as the MotoGP bikes swap paint, leathers get marked and riders eager to beat one another. The smile on Vinales face was lovely to see after such a tormenting year with constant ups and downs. The Monster Energy Yamaha Team were able to produce the bike Vinales felt comfortable on in order to push, stay focused and have fun along the way with his fellow rivals. At the start of the weekend, the talk of the paddock was that a Yamaha bike could win for sure at Assen. It was a fairy-tale finish for the Spanish rider who put his temper away and purely focused on fighting for the right to be on the top spot. Top Gun as he is known to the world, pushed Marc Marquez and Fabio Quartararo to the limit so much so that Marquez settled for the valuable points within the last two laps after realising his bike was not going to finish in front. 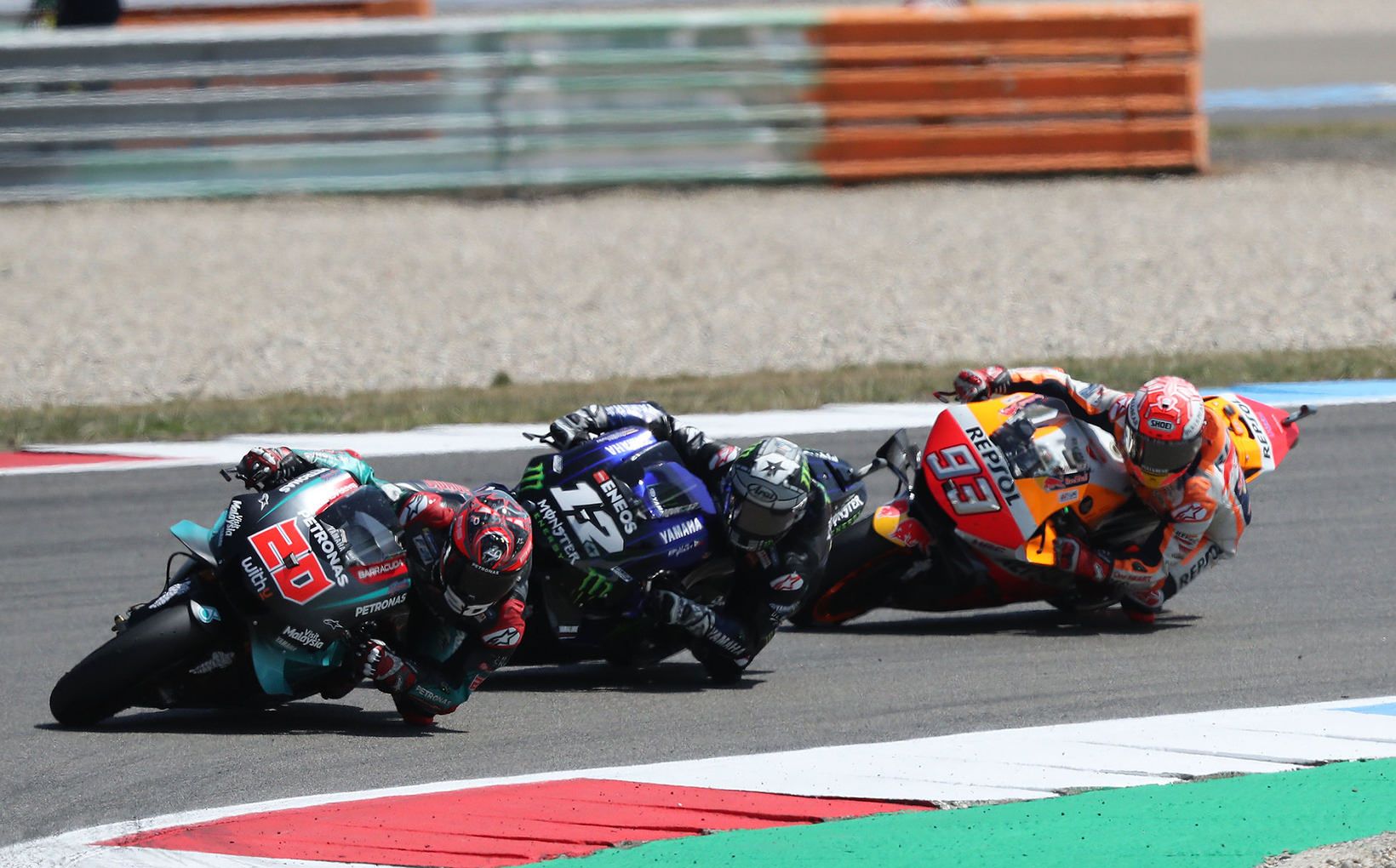 MV12: "It feels like I'm dreaming. These have been difficult times for me, because I've been out of the three tracks where I thought I had the most potential with the bike. My season has been difficult, but I've tried to keep the momentum from Catalunya, because I felt really good on the bike. I'm so grateful to the team, because they did a great job this weekend and prepared well for the last laps of the race. I was strong, even one-to-one on the brakes, I knew I could make the overtakes. It was very important to relieve some of the pressure by taking a victory. I think the team will be more relaxed now. Being back on the top step of the podium again feels really good and bringing Yamaha back to its winning ways is the most important to me. We knew we had the potential but hadn't been able to show it. It's always a combination between the team's, the rider's, and the bike's efforts. Sachsenring is a track I'm usually fast at, so we'll try our best." 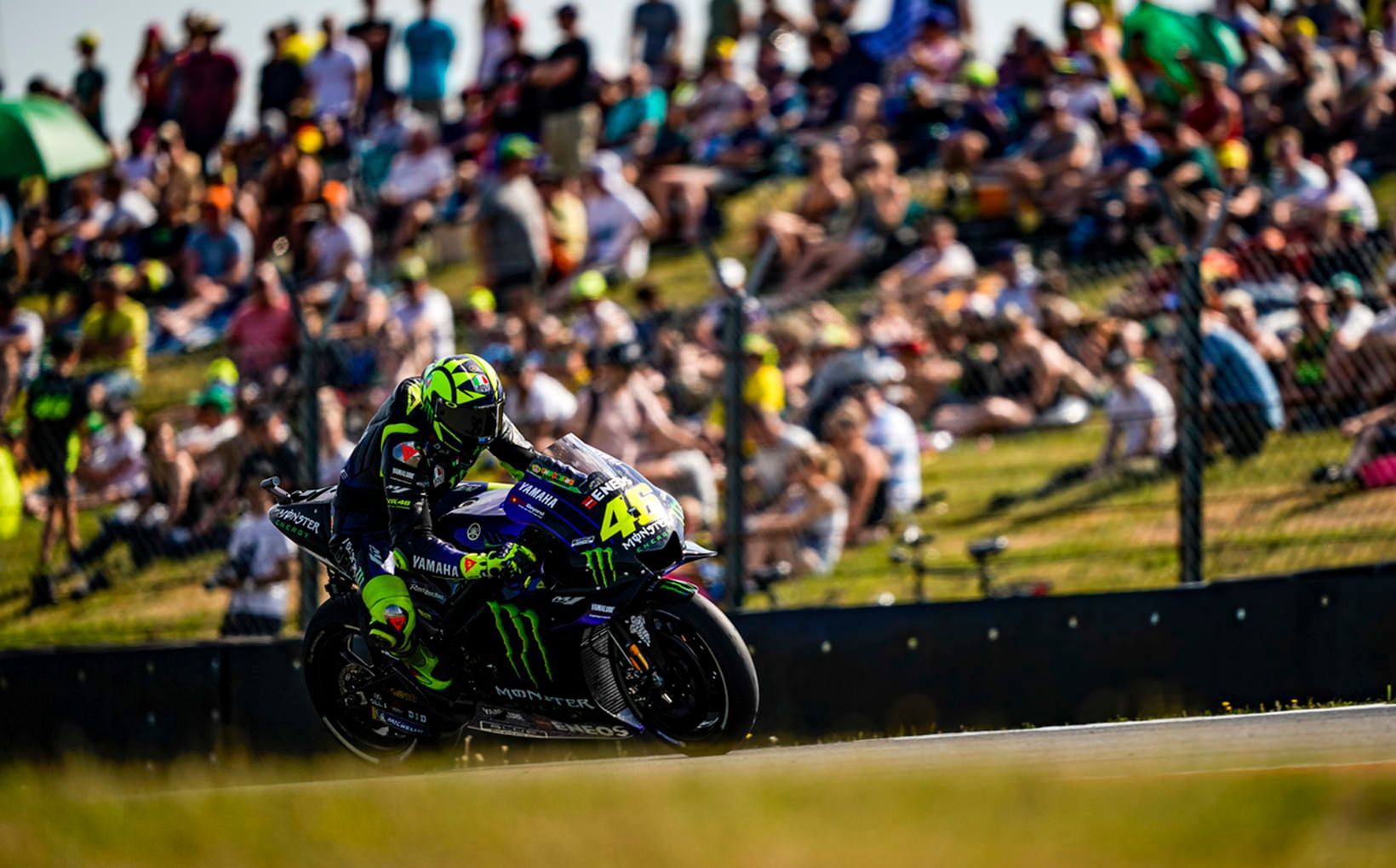 Unfortunately, the same could not be said for Vinales teammate Valentino Rossi who crashed out with his hands covering his helmet. You could see the crowd shaking their heads and throwing hands into the air as the Italian slid off in rapid fashion and taking Takaaki Nakagami with him. The two year drought for Rossi continues and it is not easy to watch. The world is talking about whether or not the Doctor should retire…. What do you think of those comments? Should he hang up the leathers and focus on running a MotoGP team in amongst his Moto2 and Moto3 category duties? We know deep down that Rossi is capable of winning again, with that said, the current Yamaha package is incredibly troublesome and we do not see this fixing overnight anytime soon. VR46: "I was quite fast, so I tried to recover some positions. I was battling with Nakagami and I tried to overtake him, entering Turn 8, but I was a bit too much off the line, I think. When I entered the corner, I lost the front and unfortunately I also took out Nakagami, so that's a great shame and I have to say "sorry". It was a mistake and a pity, because today, after being slow this weekend, we had found something, so during the race I was good. I felt good with the bike. So, on one side this makes it an even bigger shame, but on the other side it's also important to realise that I was suffering too much this weekend and that we need to be stronger." 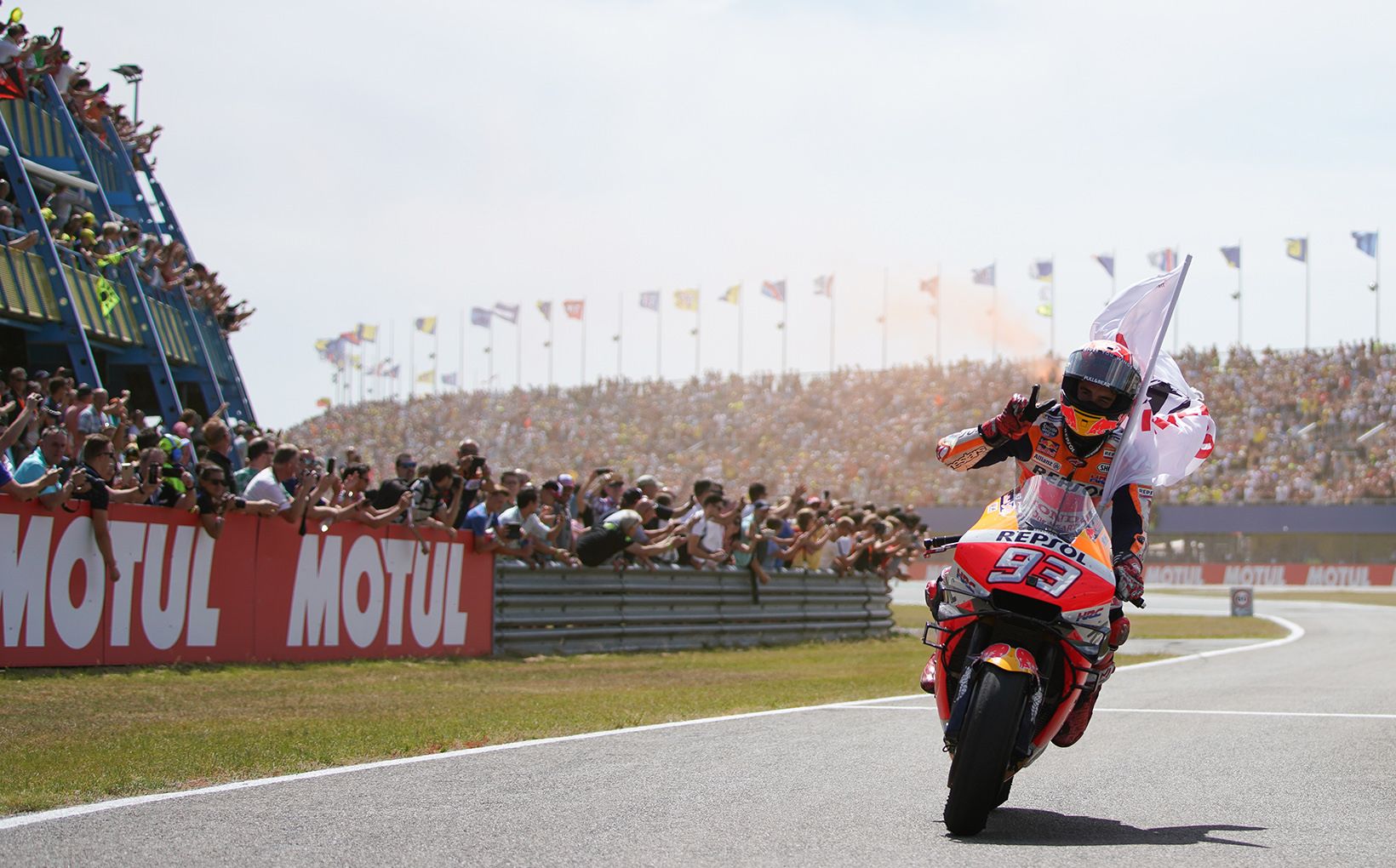 In terms of the World Champion, Marquez has increased the gap. It was all strategy from the Spanish Ant and his goals for the weekend were ticked off with a smile. Marquez chose the soft tyre on purpose in order to stand on the podium and knew that the hard compound though a favourite was not going to allow him to stay in the top three positions. As a Repsol Honda rider, he had to be calculated as teammate Jorge Lorenzo recovers and had the weight of Honda on his shoulders. It was a nice way to celebrate Honda Racing’s 60th Anniversary. 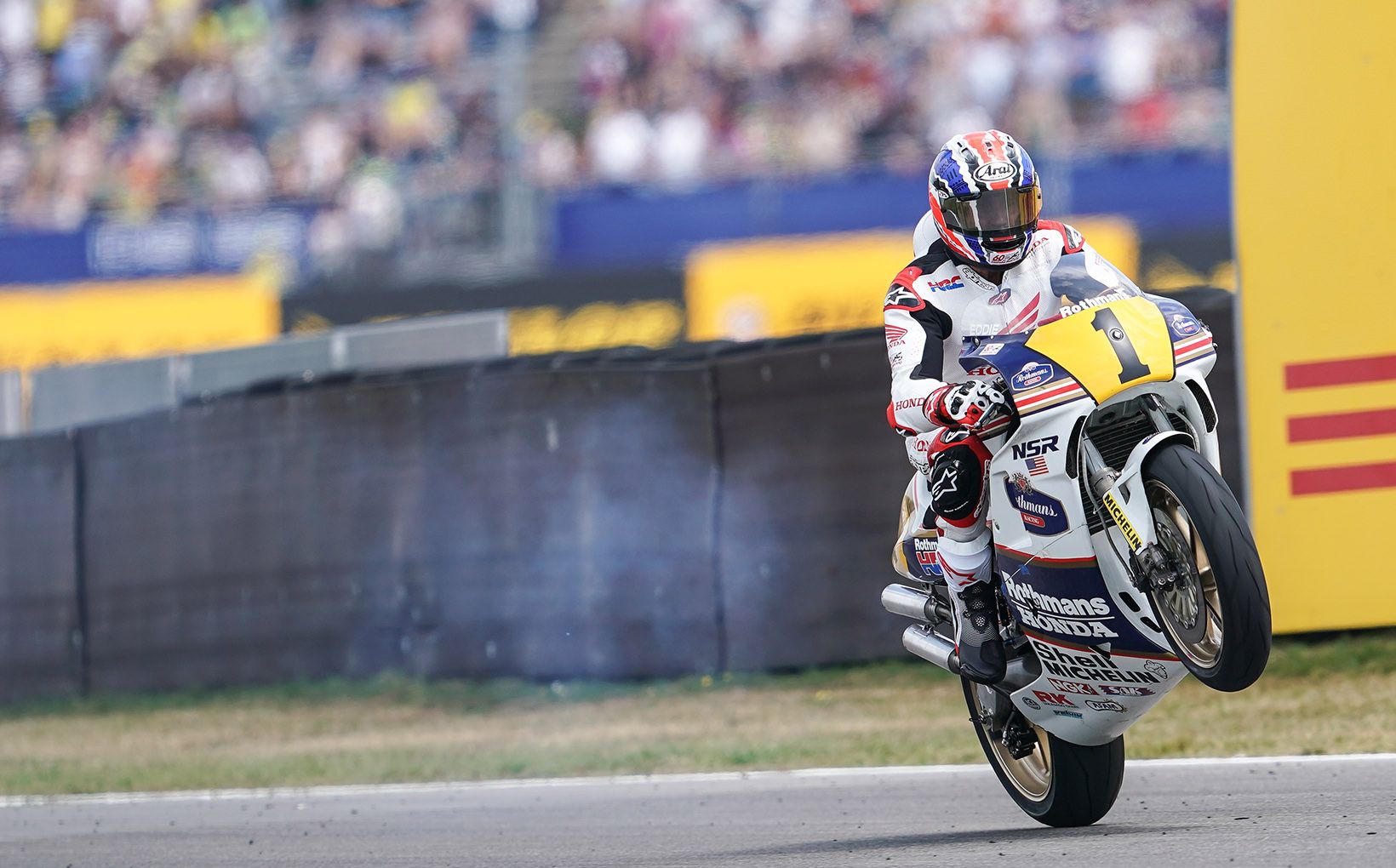 In addition to the champagne Marquez sprayed, fans were also treated a lap where Mick Doohan popped a wheelie in true Australian style. The demonstration lap prior to the race start featured Doohan’s 1989 NSR500 which sounded absolutely incredible as the Two Stroke 4 Cylinder V map its way around the circuit. 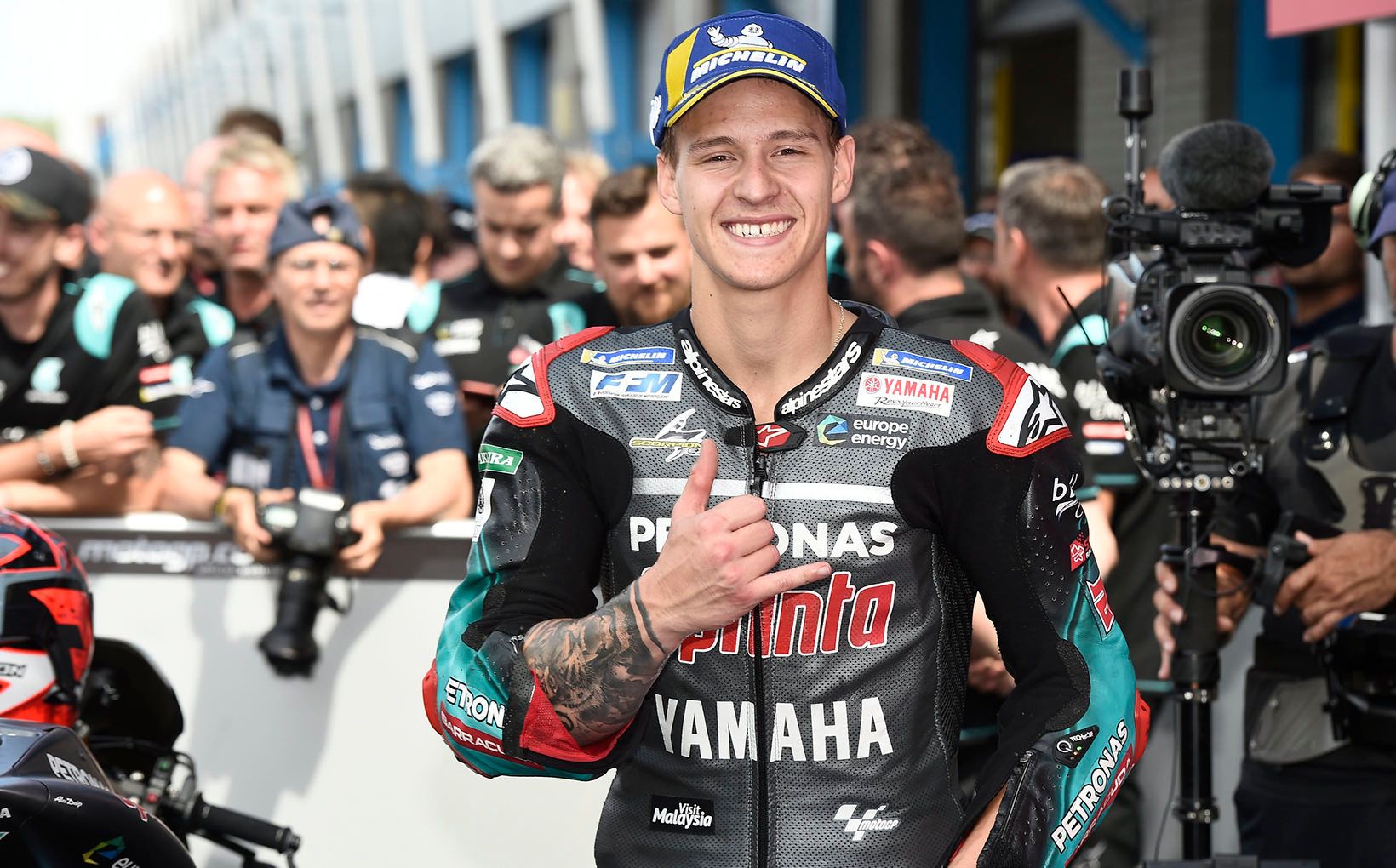 Over the weekend, the heat wave definitely impacted numerous riders with tyre wear and overall physicality. Quartararo and his Petronas Yamaha Sepang Racing Team suffered on the back straight where his machine was incredibly unstable and his forearm very swollen after the conclusion of the race. The French rider had surgery for arm pump not long ago and was fighting to hold on to his machine at various sectors of the circuit. It was a very courageous ride specially to stay on board and upright. FB20: “It’s been a great weekend, although the race was very tough. Leading the race was one of the best moments of my life. When I was a kid I watched these races, and today I managed to lead one. When I got overtaken for the lead, I knew I couldn’t do anything to respond because of my arm problems. The chasing pack was further behind, so I chose to manage the distance and ensure I placed on the podium. My arm bothered me a lot because there were several bumps and a lot of wind, which made the bike move around a lot. We have taken another podium, and yesterday I got on pole, so I couldn’t be happier. The goal in Qatar was to get into the top ten frequently this season, but little by little we have been raising our targets. I’m looking forward to Germany.” The will to fight until the last lap is honourable and has allowed Quartararo to improve his position in the World Championship. The rookie rider is only five points behind Rossi! 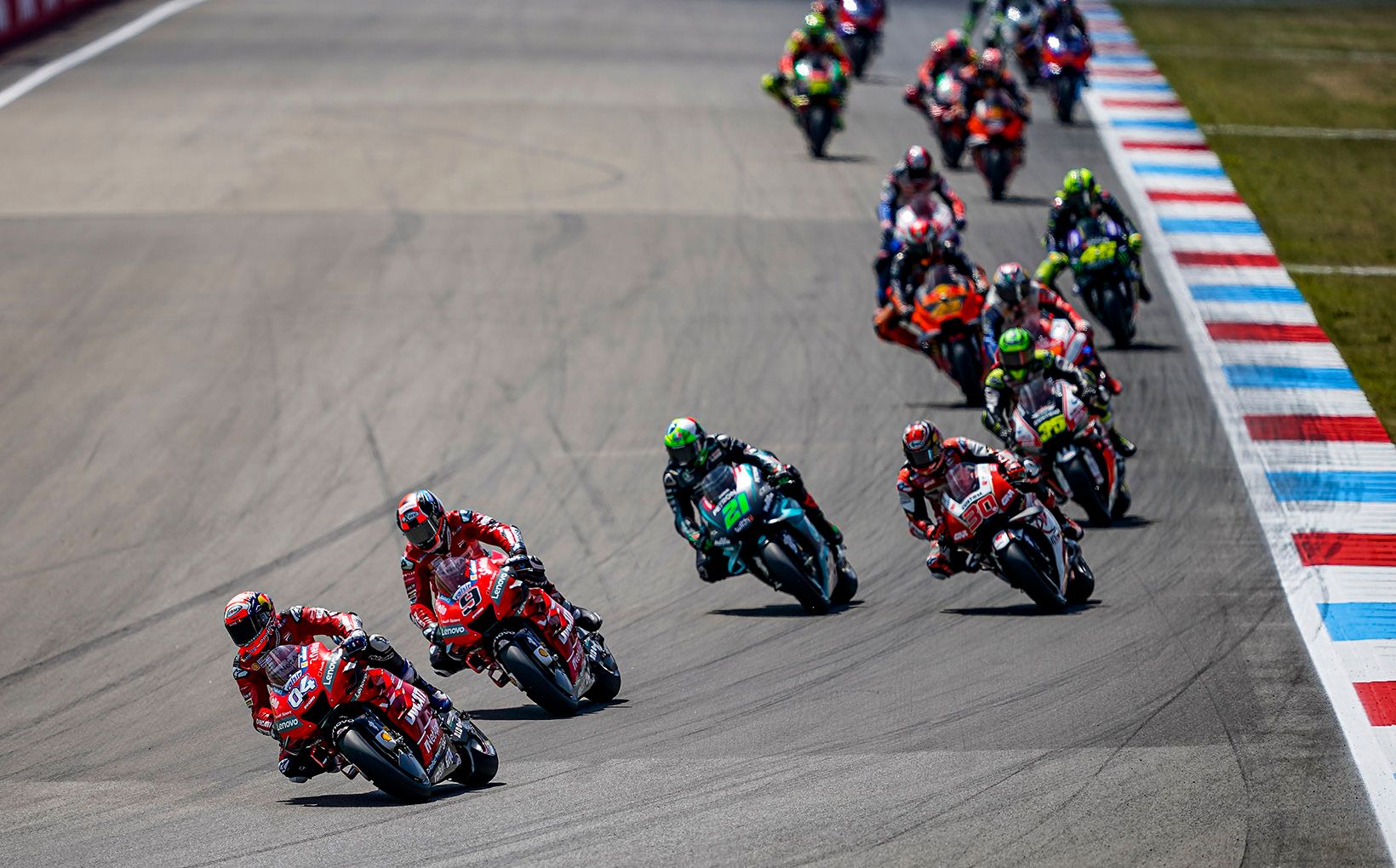 The Ducati machines were the bikes that struggled the most over the entire duration of the weekend. Andrea Dovizioso, Danilo Petrucci and Jack Miller in particular were incredibly frustrated. DesmoDovi watched as valuable points disappeared and his body language incredibly downbeat as the issues which Dovi has voiced concerns over still arise. “Unfortunately, on tracks such as this one our limitations are a bit more evident and everything becomes more difficult. The gap on the finish line can't make us happy, so we need to keep working hard to make further progress in the areas in which we struggle the most, and we'll try to do that starting from next weekend at Sachsenring." With that said, the German Grand Prix is also a race whereby the Ducati tends to be limited so it will be interesting to see what strategies the team chooses in order to be more competitive. In addition to Dovi, Petrucci also felt the harsh reality of Assen as a circuit. DP09: “The rising temperatures complicated the situation because, when the grip level goes down, we struggle more than our rivals and today it wasn't possible to match the pace at the front.” The negative points were clear that the Ducati was very hard to turn in and out of the corners whereas the Yamaha shined. It was a race that showcased why the sport is so intriguing to watch and also entertaining as the competitors risk crashing for the glory of being number one. 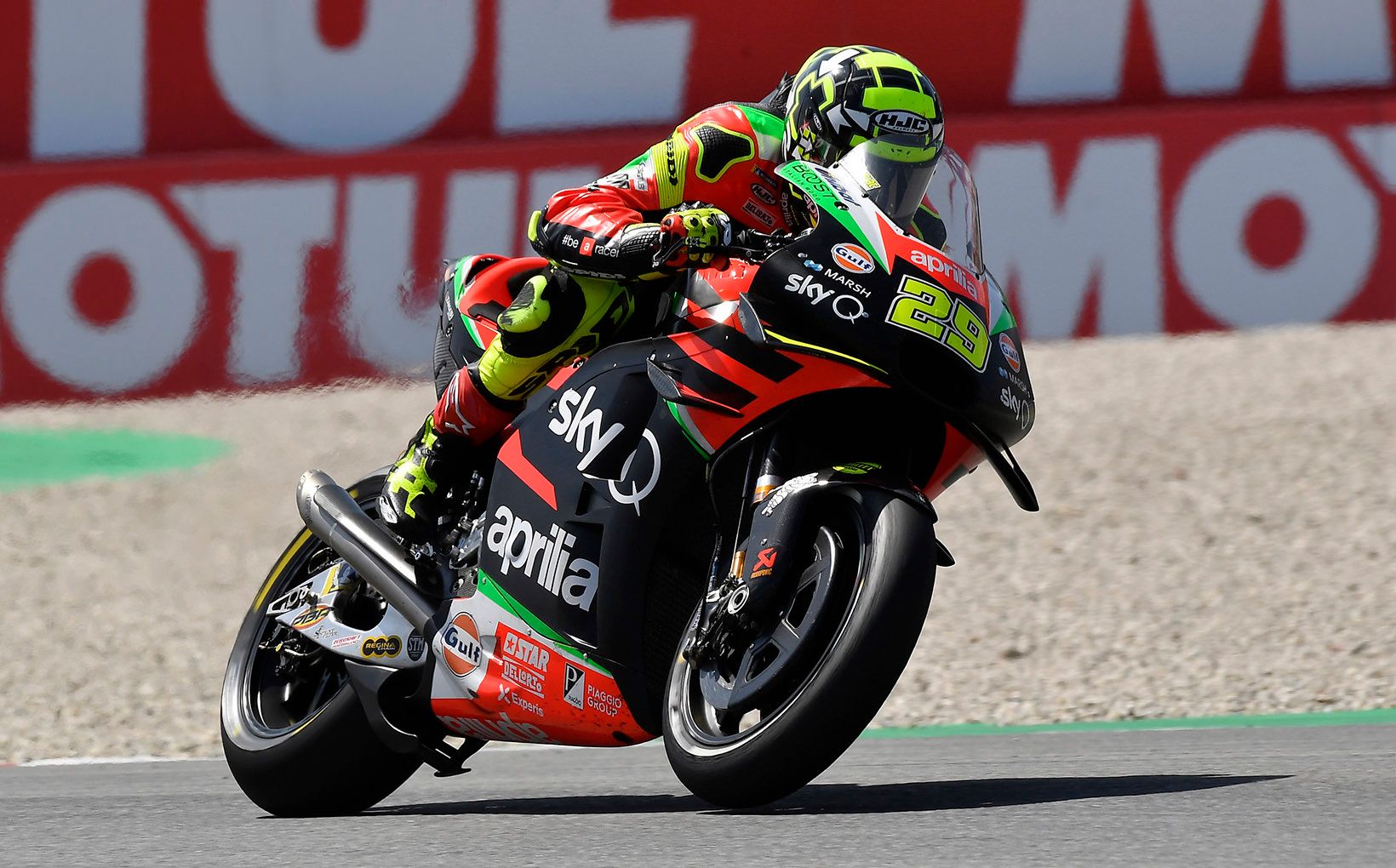 We do have to make mention that it was a good result for Andrea Iannone who has been in the shadows for the entire season. The hard work is not over though as the bike needs constant development. AI29: “Besides the position, which is my best result with Aprilia, I am especially pleased with the nice pace I maintained throughout the race. With better qualifiers, we would have had a chance for a much better finishing position. This result is the fruit of constant and consistent work, on my part and by the entire team. We have faced some difficult moments, but neither my commitment nor our reciprocal trust have waned.” The journey with Aprilia has been incredibly challenging for a rider who is known as maniac joe and one to race with an aggressive nature. It will be important for Iannone to keep achieving important results because if at any stage the results become negative, his ride could be up for grabs. The sport of MotoGP is very cut throat when it comes to performance duties!

As we move towards the German Grand Prix next, the task to stop Marquez is vital! Repsol Honda rider Lorenzo will be in a body brace for up to three weeks so he will miss the next event. With the summer break coming up shortly, each team will look forward to some relaxation and then resetting for the second half of the season.