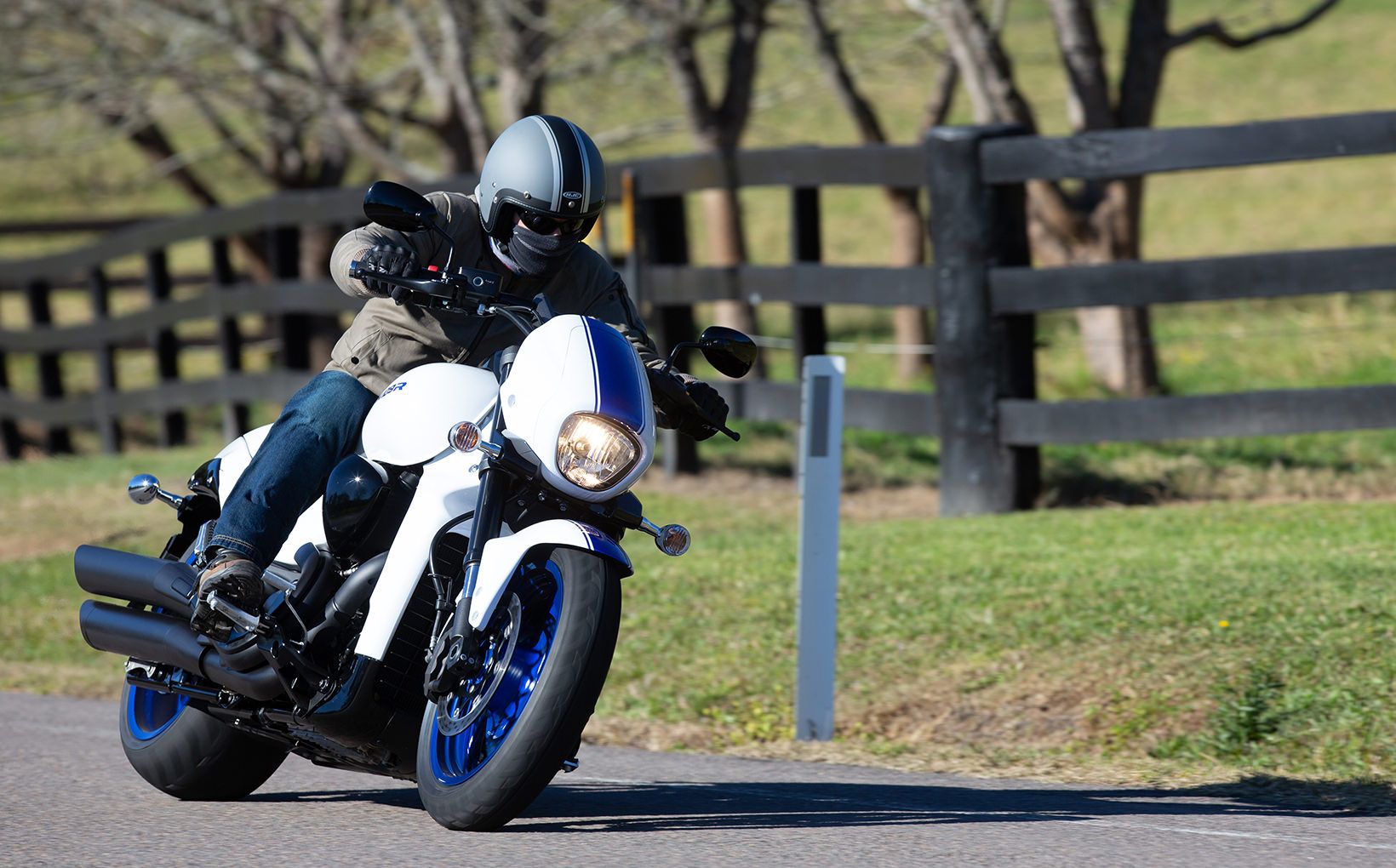 This is the latest iteration of the Suzuki M109R called the Black Edition, a name I checked twice given the amount of glaringly white pearlescent paint on our test bike (it makes a bit more sense with the more subdued Candy Red version). A combination of gloss and matte black parts make up just about everything that’s not bodywork or wheels, the acres of white on our bike split down the middle by a bold, metal-flake-blue stripe running from nose to tail. It’s a striking look that helps make the bike appear lower and longer — as if it needs help in that department with a wheelbase of 1710mm and a 705mm seat height.

When I was doing my research on the M109 (and you lot think we just make this stuff up) I discovered that the other vehicle out there with the same name is a self-propelled, 39-calibre howitzer firing what is called an HVP or hyper-velocity projectile. This somehow all seemed quite appropriate for the big Suzuki, which feels as unstoppable as a tank and is also capable of firing you out of corners at (while perhaps not hyper velocities) an unexpectedly rapid rate of knots. A bonkers peak torque of 160Nm occurring at 3200rpm informs you somewhat as to how this bike likes to be ridden. Having said that, from a standing start the motor proved willing to hit the redline in a surprisingly short amount of time, making frisky getaways easily possible. 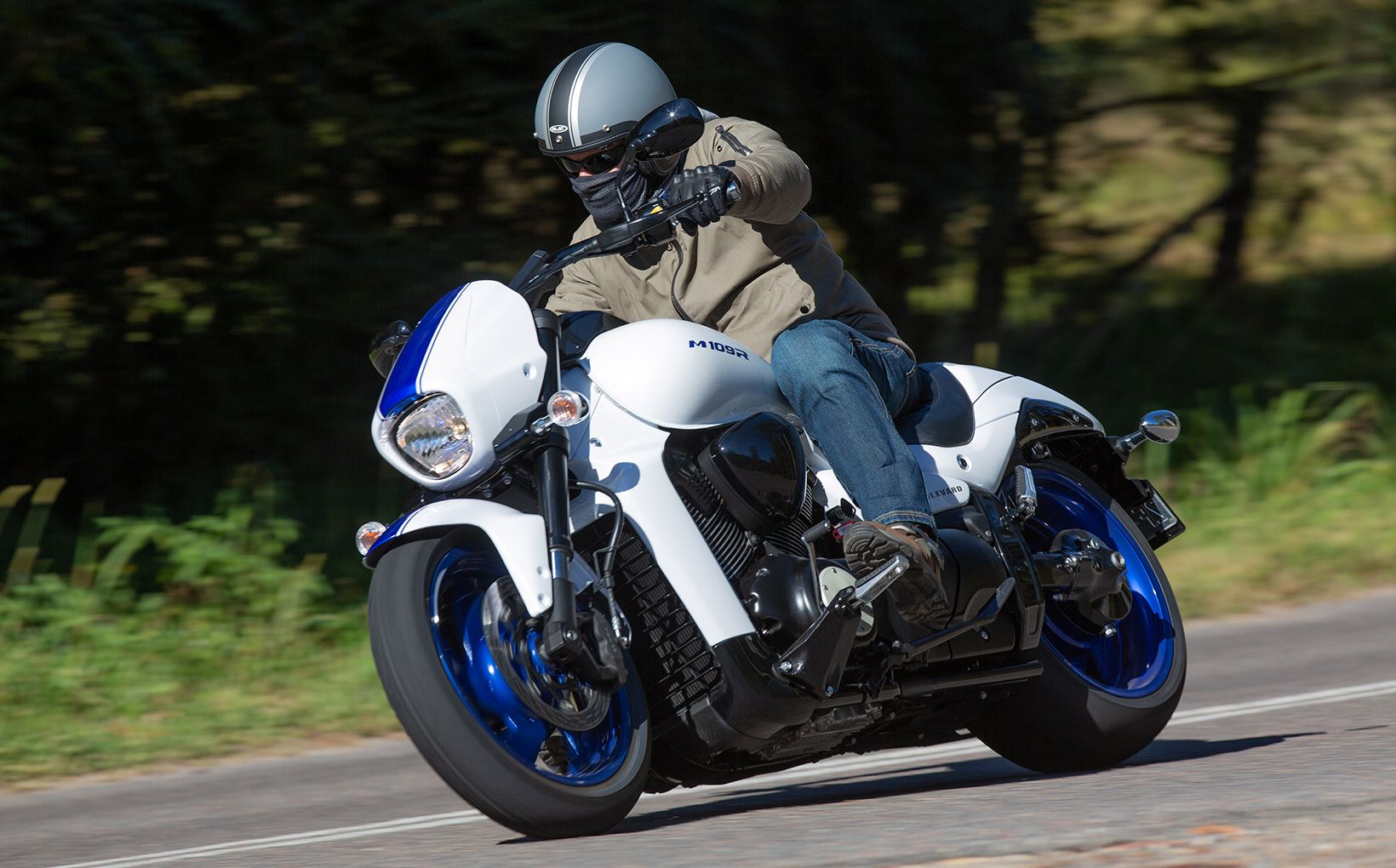 Conversely this is also a bike that is probably happiest when not in a screaming hurry. For a start the 347kg wet weight means things necessarily happen at a slightly slower pace, even with that giant motor propelling the thing. Similarly, the gearbox will not be bullied into frantic cog-swapping, eliciting a solid clunk between gears even when you’re being delicate with it and sounding somewhat more industrial when you’re not. Clutchless changes are definitely not recommended here and the direct connection to the rear wheel via the shaft drive will remind you of that if you try to get racey with it. Still, no rush as there’s only five gears to get through and you could probably just leave it in third all day anyway, such is the spread of power available.

The long-legged 1783cc V-twin donk also does its bit in keeping things composed and relaxed, turning over at a laughably sedate 3000rpm when at the legal limit, meaning you can almost count the suck-squeeze-bang-blow. If you could hang onto the wide drag ’bars tight enough, this gives the bike a theoretical (read unlikely) top speed of 275km/h at its indicated 7500rpm redline.

Two things about this irrelevant piece of maths are almost certain: one, I’m not nearly game enough to try and prove it, and two, the horse-head sized headlight/nose fairing couldn’t possibly bludgeon the air out of the way quick enough to get you there. In reality you’d be lucky to see much over 200km/h. The upside of that bulky bikini fairing though, when matched to the bum-scrapingly low seat, does mean the rider is surprisingly well protected from the bulk of the wind blast. On the freezing day we did the photo shoot, that contrasted sharply with the polar blast whistling up my trouser legs thanks to the ergonomics of the forward controls. Thick socks, people, thick socks. Talking of the position of the ‘pegs, their proximity to the curve of the rear header pipe did mean I melted the inside of my right boot on occasion — a shame for both my favourite pair of boots and the finish on the pipe. 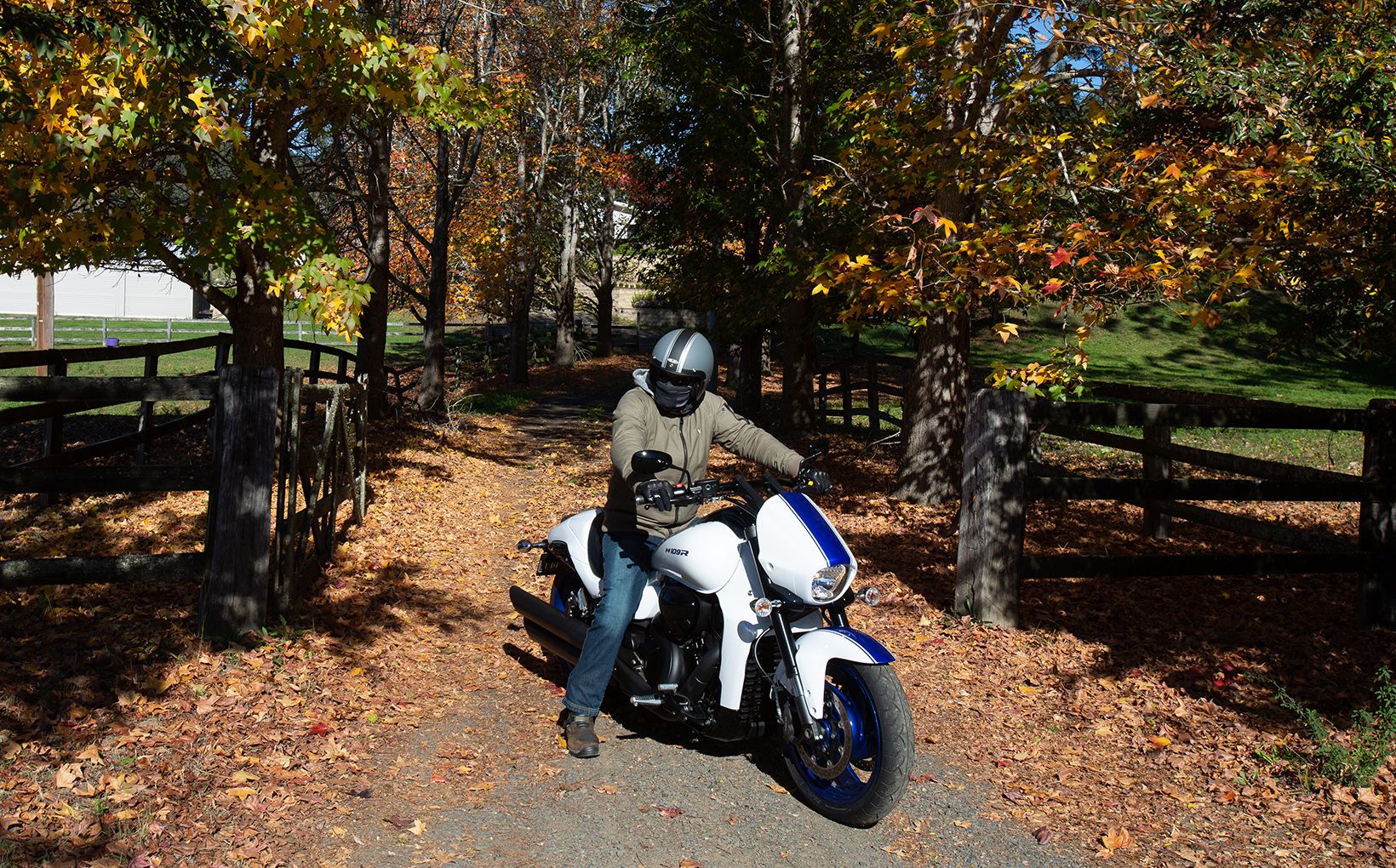 If you normally like to smash through the turns, you’re probably not in the target market for the M109… but it is surprisingly capable, with some caveats. The ground clearance, by which I mean first the heel of your boot dragging on the bitumen followed almost instantly by a trail of sparks from a footpeg, is pretty limited and needs to be constantly factored into how you approach a bit of enthusiastic bend swinging.

That well-worn phrase slow-in-fast-out is particularly apt here, and luckily the powerful twin Tokico 4-pot radial calipers and 310mm rotors up front, combined with a very effective rear twin-pot caliper and oversize 275mm disc, allow you to achieve the first part of that, although even with the GSX-R-inspired brake package there’s not masses of initial bite and the lever does require a good squeeze to haul up all those kilos.

As ever, when trying to maximise your ground clearance, get all the braking done before you turn in, allowing the suspension time to rebound and make the bike as tall as possible. The fast-out part is taken care of by the oodles of gloopy torque available from just above tickover, and even without any fancy electronic aids, the throttle can be confidently cracked to the stop the instant you see the corner start to open up. On full gas the bike shudders and shakes as you unleash the cannon-like explosions within each of the two near 900cc pots. They’re home to just about the largest-diameter pistons to be found in a road-going car or bike, testament to the gargantuan proportions of the motor and with only a 3mm difference to the shell fired by the Howitzer we mentioned earlier. 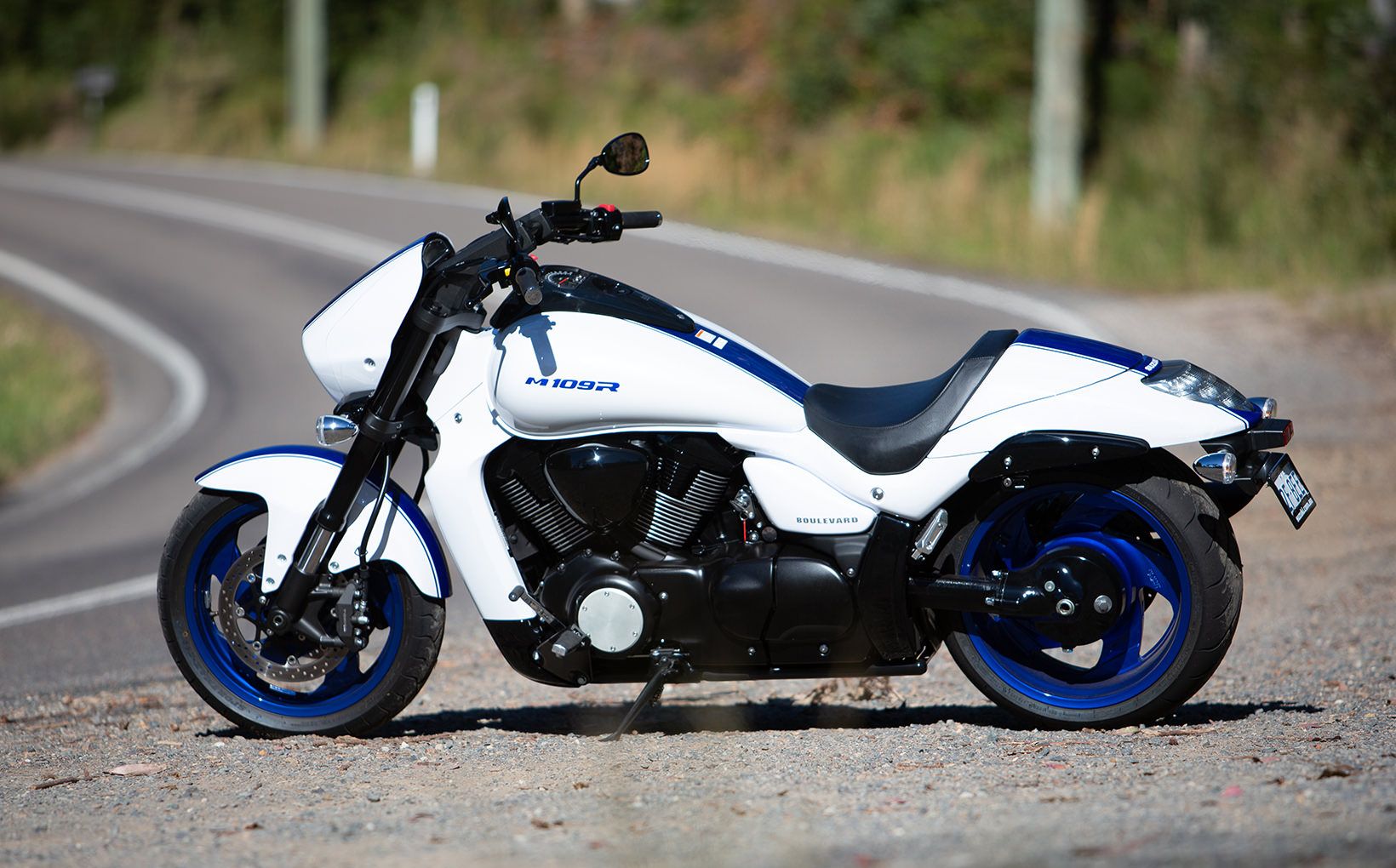 There’s no denying you do have to muscle the bike about when trying hard as the steering isn’t sportsbike-quick, what with the bike’s long wheelbase, raked-out head angle and mahoosive 240-section rear boot. But the grip on offer from the Dunlop Sportmax tyres is more than adequate to allow you to yank the ‘bars around with confidence when getting a shift on. The USD Kayaba cartridge fork and same-brand rear shock offer a controlled ride in the corners, up to a point, as well as sofa-like comfort on the straight bits that speaks of well-thought-out damping and spring rates.

Once you’ve got in the groove, making what my lawyer has in the past called good forward progress is very achievable and a load of fun. It would definitely come under the point-and-shoot style of riding and requires concentration, planning and a bit of effort. You’re probably not going to put the wind up any properly racey kit out there — this is all relative of course — but certainly there aren’t many other cruisers around that could hang with this.

On the flip side, the Boulevard experience is at least as much about being out there enjoying a mellow ride as it is trying to belt along grinding your footpegs into throwing knives. It’s very refreshing to just glide through the countryside with nothing to prove, enjoying the view, the breeze and the journey. I’d be the first to admit I ride in, shall we say, a boisterous manner fairly often, not spending enough time taking in my surroundings. It was a pleasant change to cruise along at a more reasonable pace, watching the world go by and hardly bothering the gearbox.

All of which is helped by some pretty comfortable ergonomics which are not the tortuous clam-shell position a lot of cruisers (or even so-called tourers) force you into, the main problem with which is an inability to move your weight around over time to give different bits of you a rest. Sure, your feet are a fair way out in front, but the pull-back ‘bars, perched atop enormous curved risers, allow you to sit fairly upright. What’s more, the seat is massive, supportive and very comfortable. This is a cruiser I could happily ride all day with no issues. 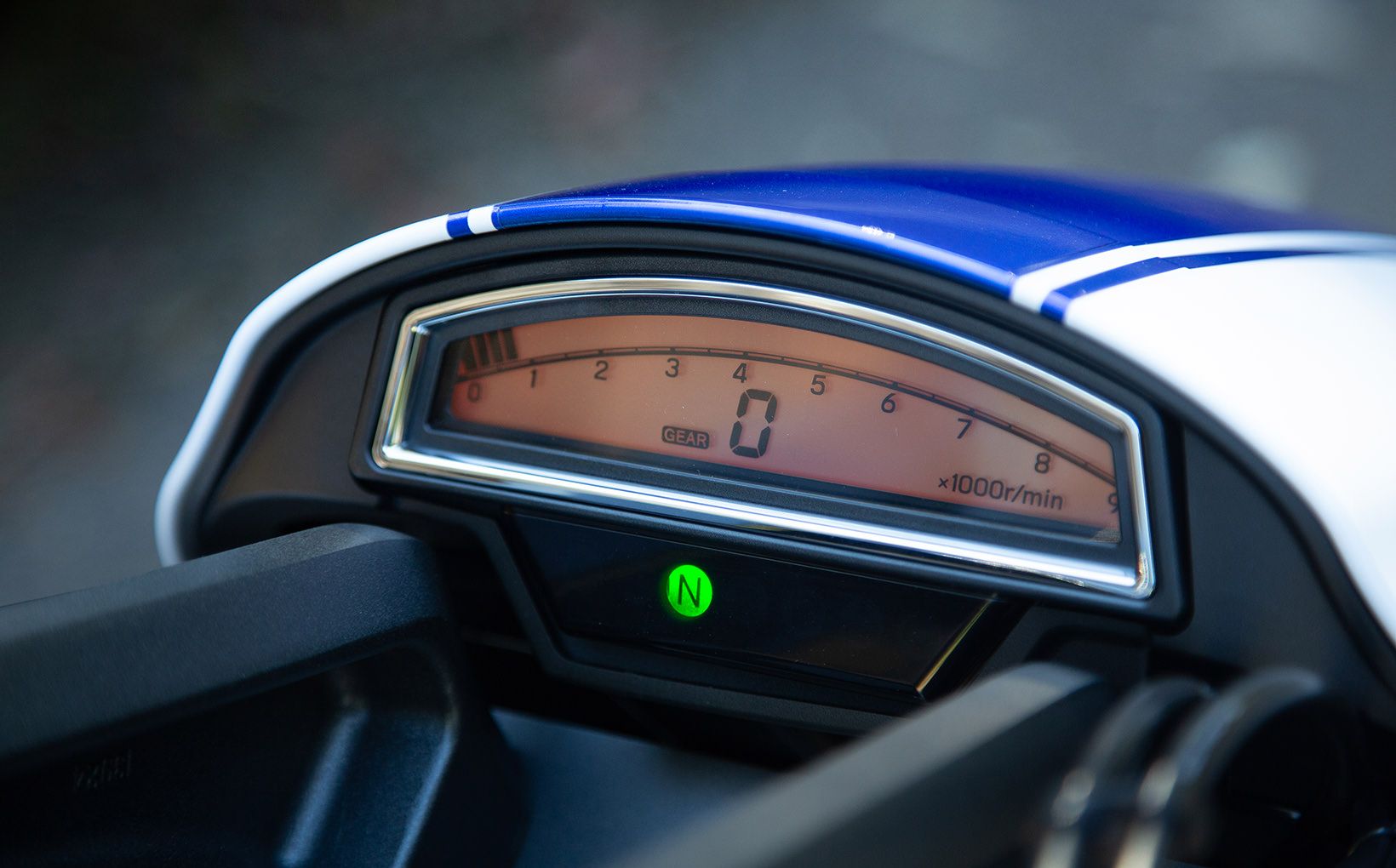 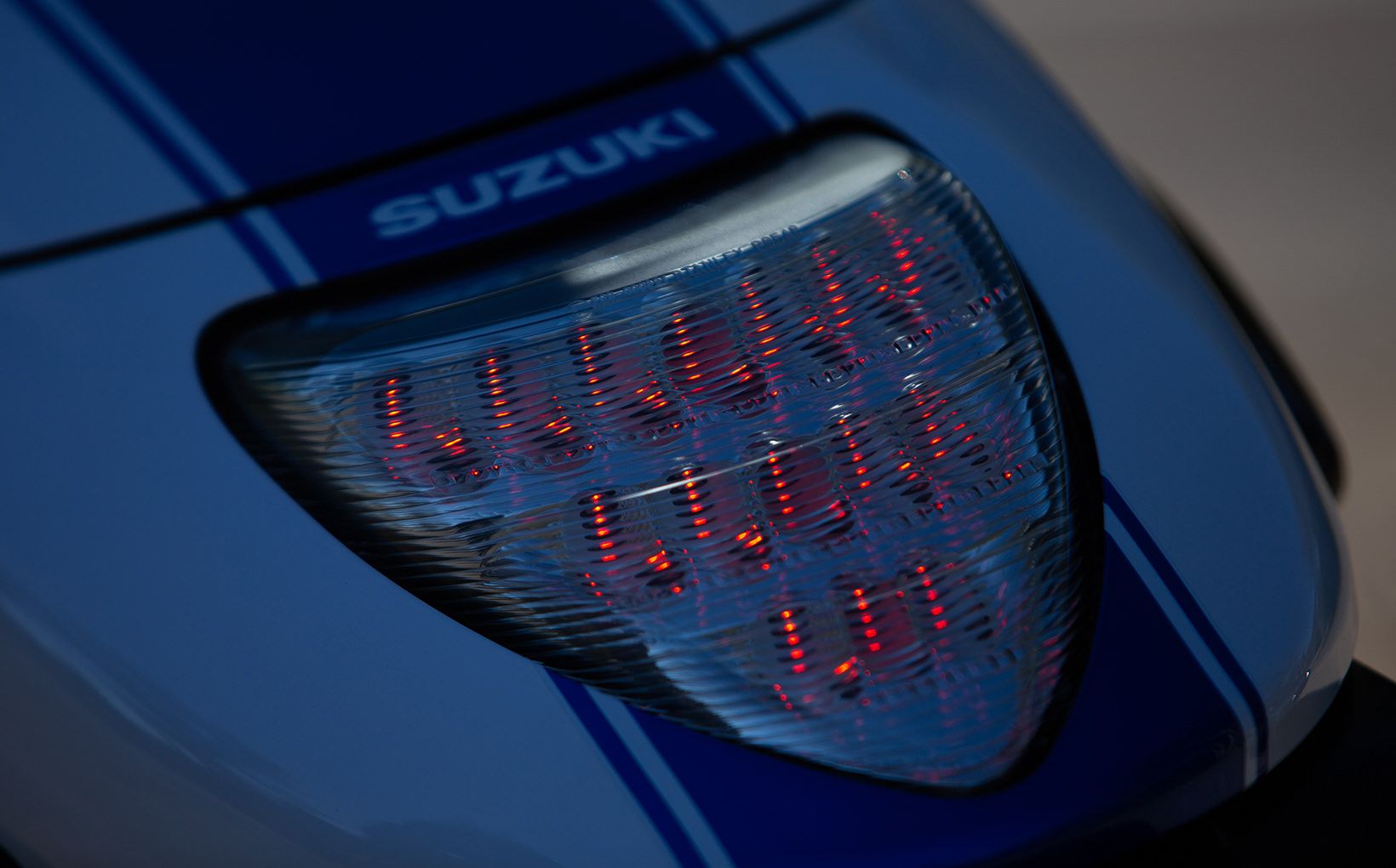 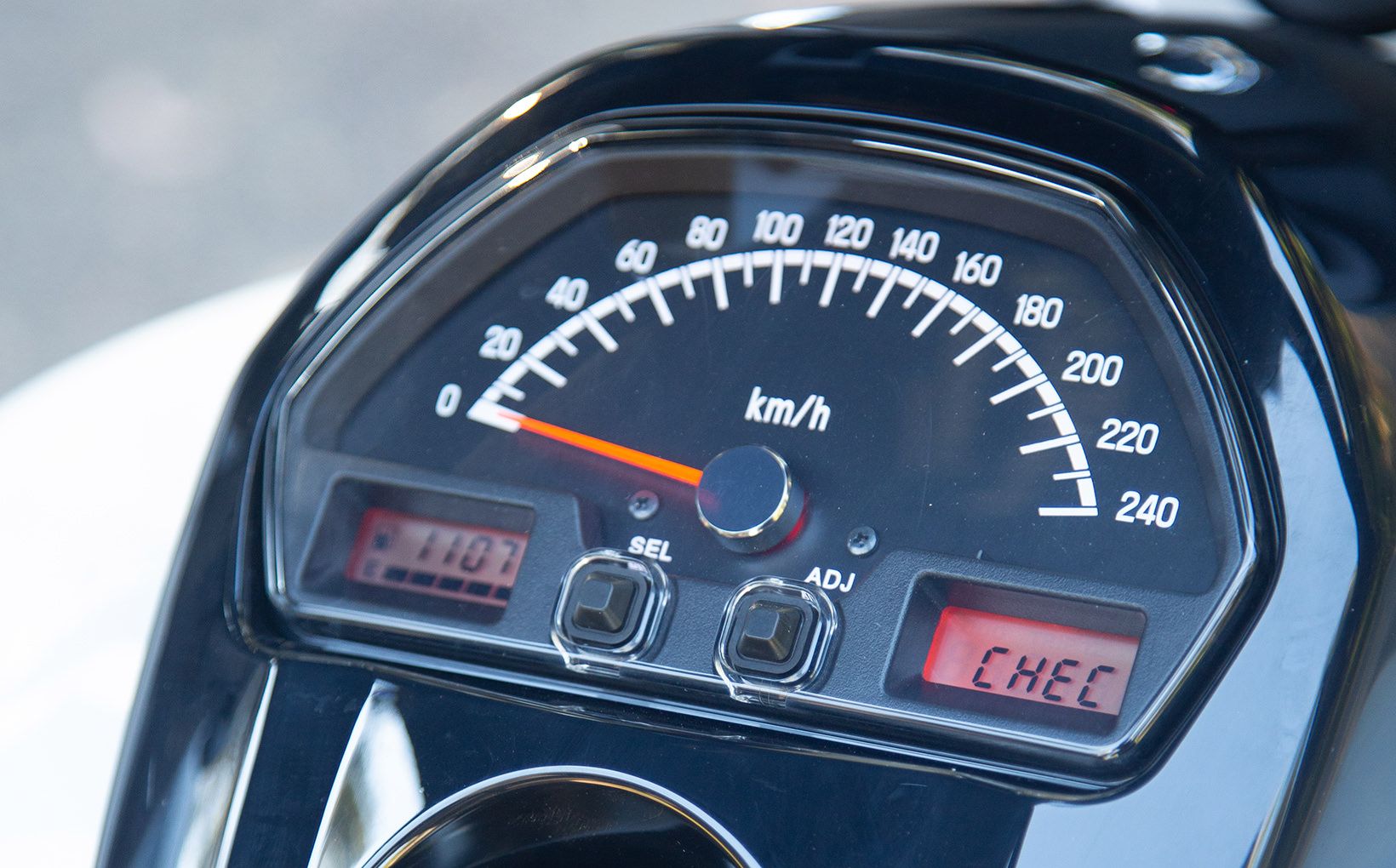 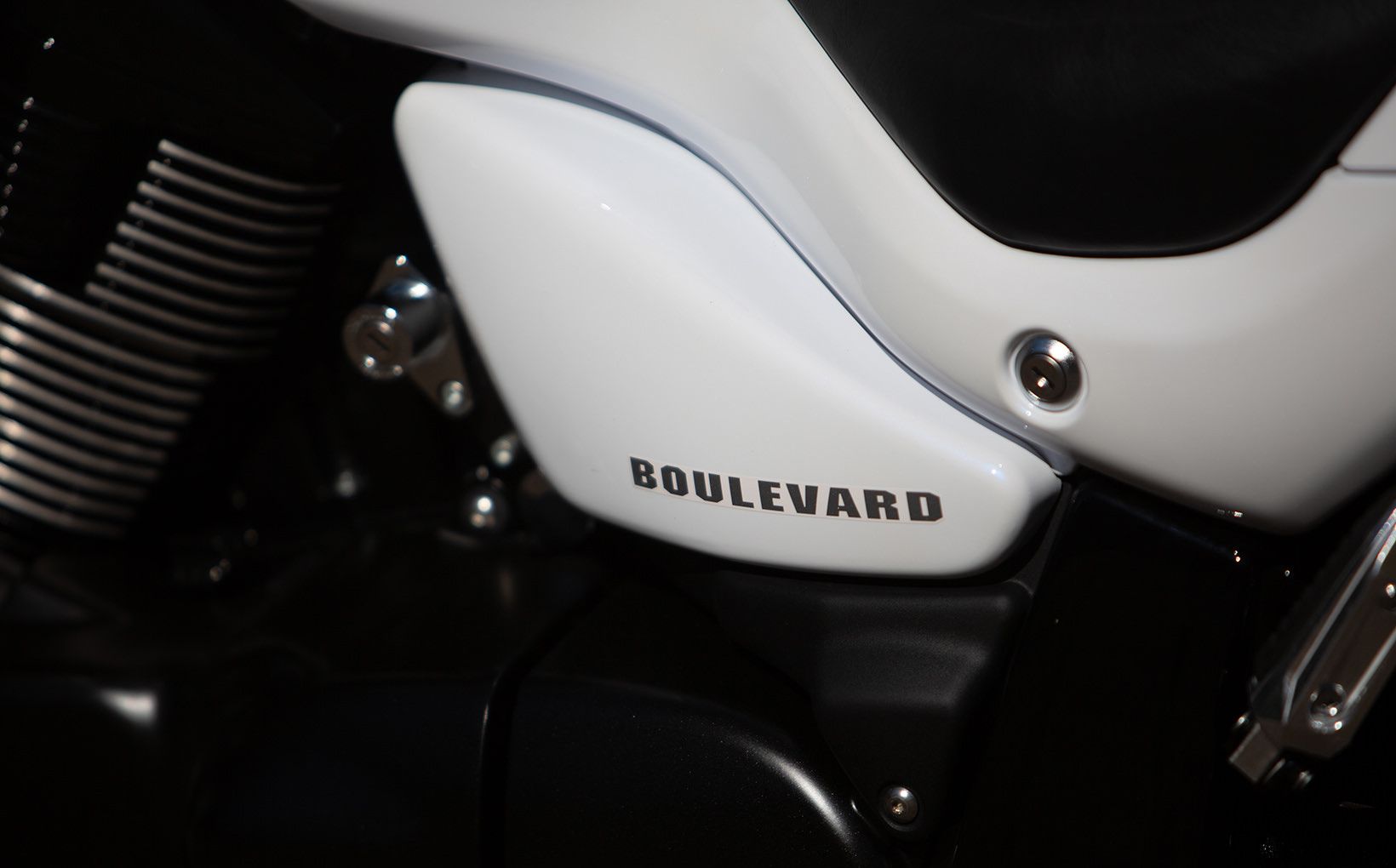 From the saddle the view is quite minimalist, with only a curved digital tacho featuring a gear indicator and a couple of idiot lights, in your line of sight above the thick, black, one-piece handlebar, kept cleaner by the fact the ignition is mounted on the side of the bike behind your left knee. The rest of the instrumentation is gathered into a tank-mounted nacelle that required quite a long look away from the road if you’re trying to keep an eye on your speed or squint at the small clock and trip windows.

Splitting up the information like this has never been my favourite option but it is, of course, very much in the cruiser vibe. The retro analogue speedo with its wide, semi-circular sweep and white digits is at quite a flat angle to the rider, such that a certain amount of parallax error is inevitable. This works for you up to about 120km/h (the 12 o’clock position) where the speed reads higher than it is, and against you from there on up.

Around town the M109 makes a remarkably effective commuter, belying its bulbous look. You can squeeze through most of the same gaps as on a regular commuter and in slow-moving traffic the torque seems amplified as the bike positively explodes out of one gap and into the next. When filtering, just watch for the edges of that massive tyre following raised white lines or cats-eyes, as it can cause the bike to meander about just when you don’t want it to. 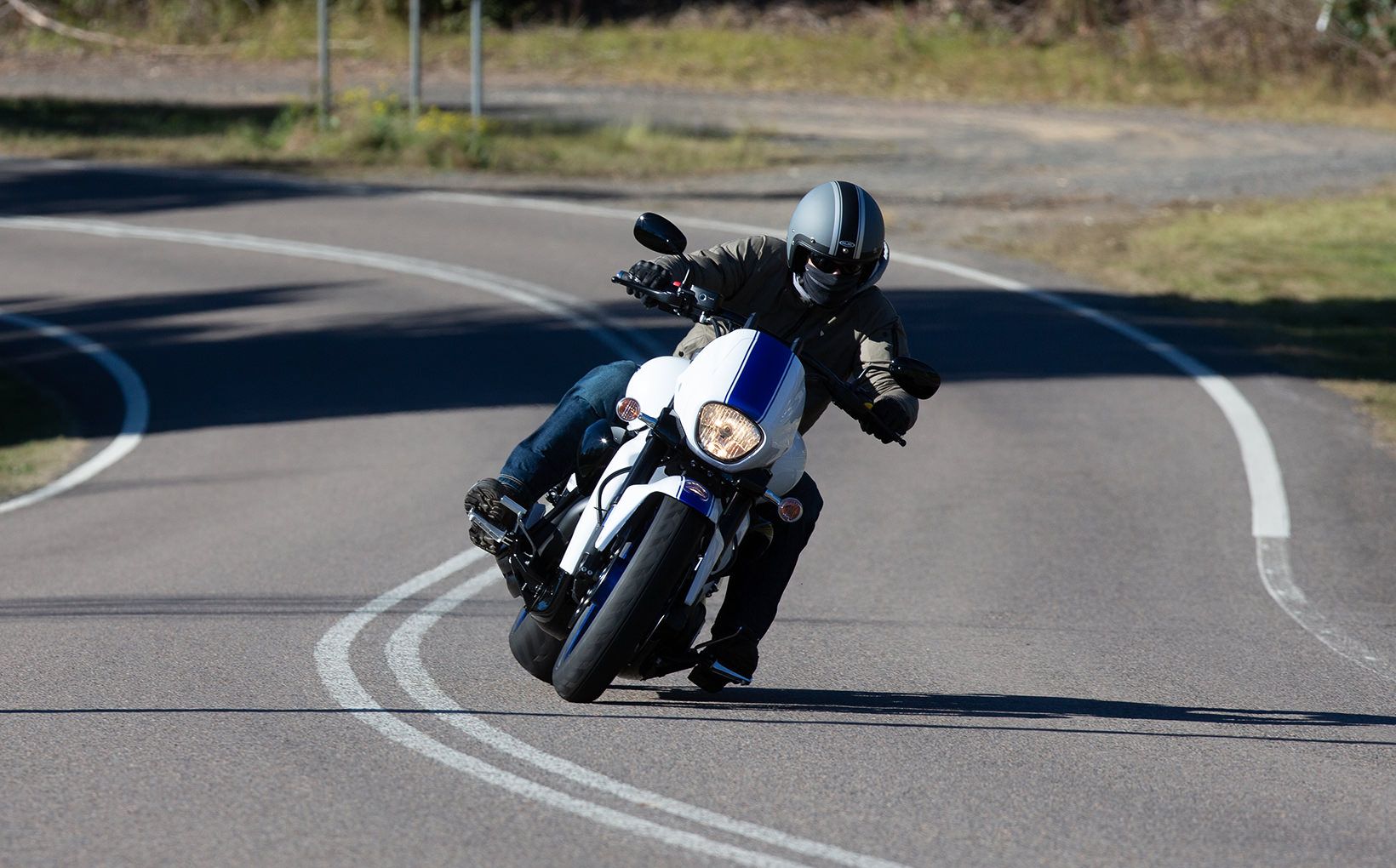 The last time I rode a Boulevard was about 10 years ago and in truth it hasn’t changed all that much since. Perhaps the R stands for refinement rather than revolution and this model certainly feels more capable than the last one I slung a leg over. As cruisers go there aren’t many out there with this kind of performance or handling and you do get a massive amount of metal for your money. If you’re thinking of moving into the cruiser market but worry about not being able to get your cornering jollies, then try one of these; just be prepared to spend up big on hero blobs. 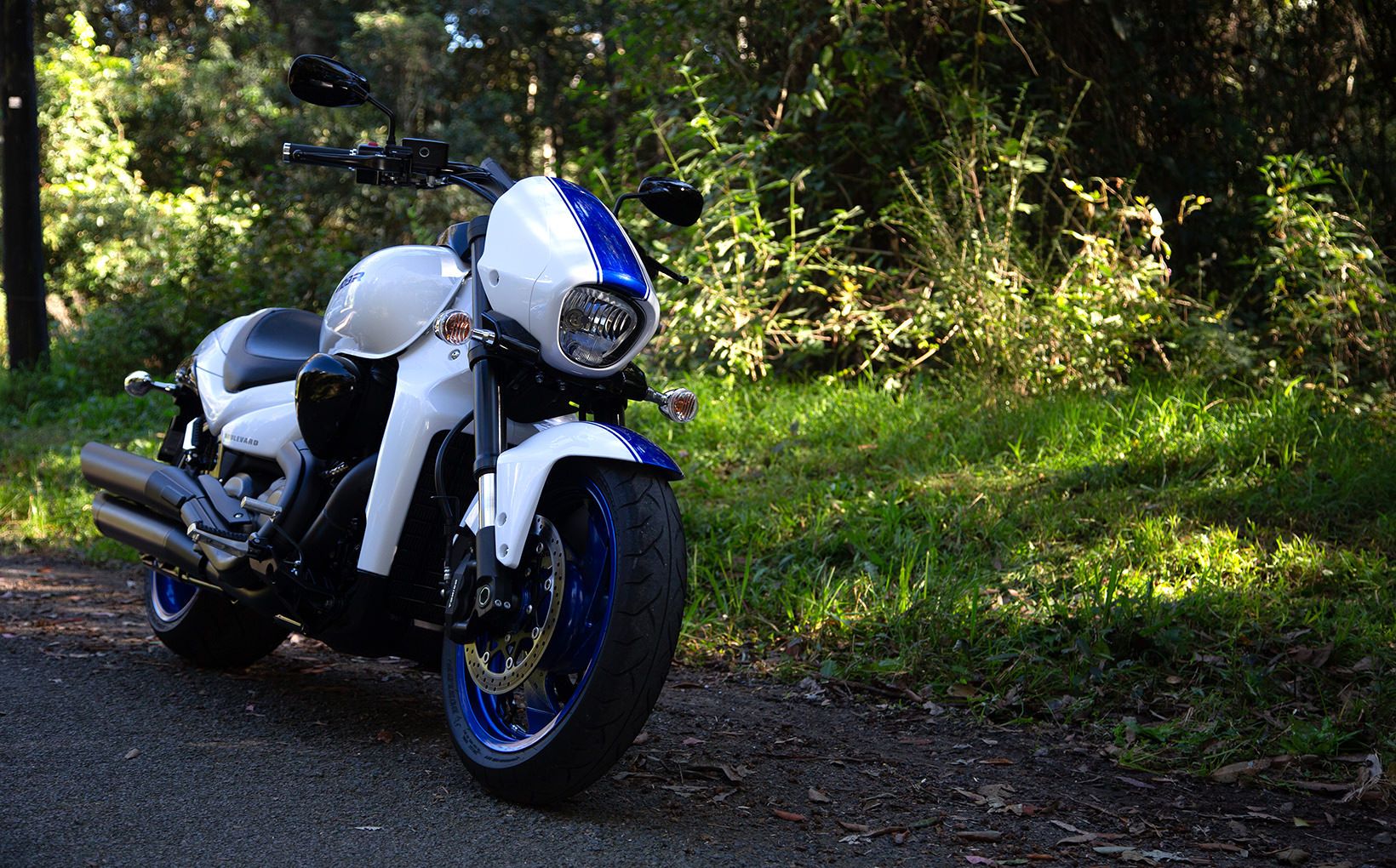