Valentino Rossi Tests Positive for Covid-19 as Aragon Round Arrives 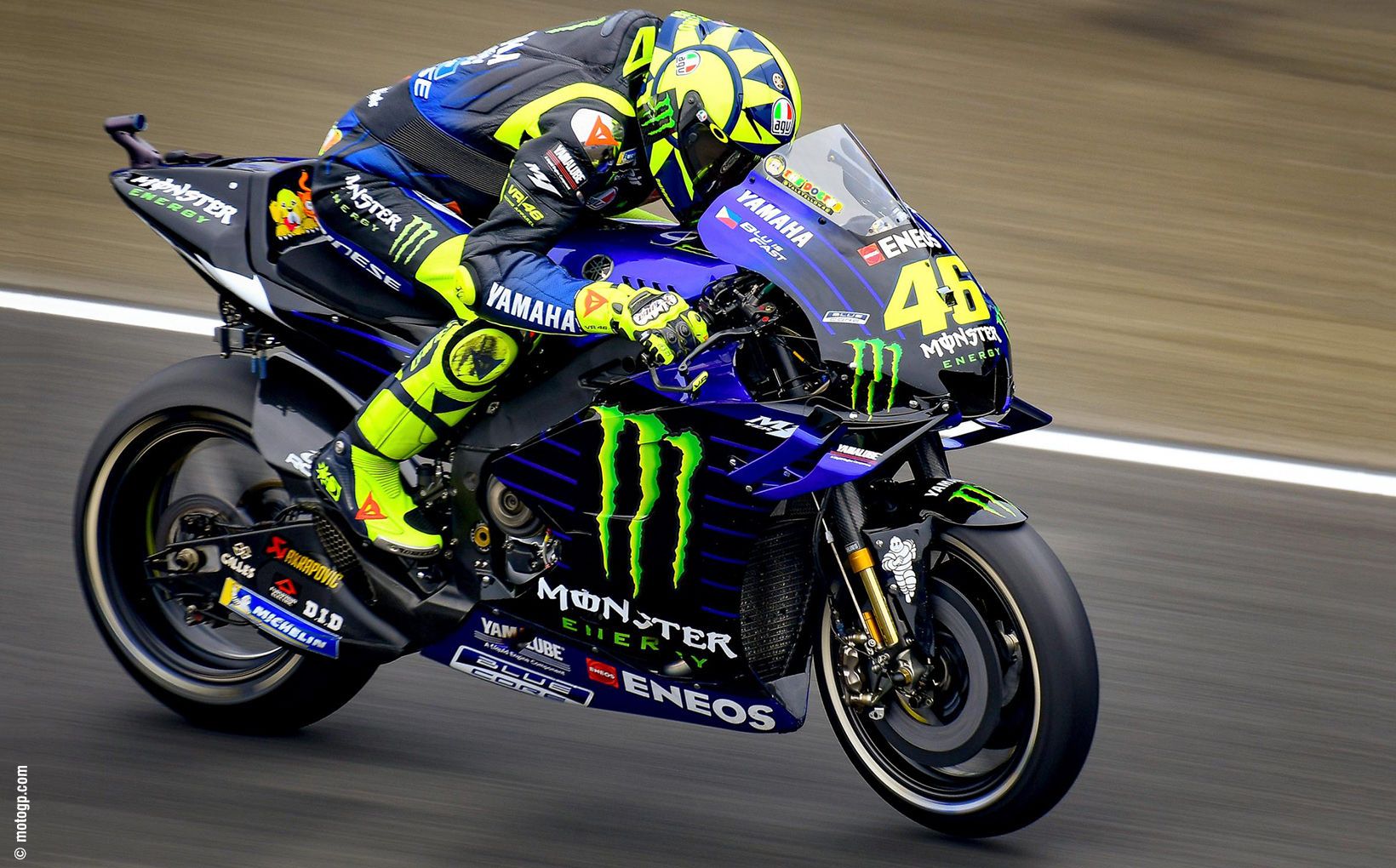 In breaking news, Valentino Rossi will have to sit out the 2020 Aragon MotoGP after he tested positive for COVID-19. It is the headline no one wants to see because it affects the sport and also one of the leading riders of the brand of two wheels. Rossi will be monitored daily as this phase of the virus becomes a worry for everyone around him as we will not know how it affects his physicality, performance and eventual return to the track. This is exactly what Yamaha and MotoGP as well did not want to experience. Right now, we have two multi World Champions sidelined, as Marc Marquez still observes and is working hard to regain his strength, fitness levels and ability to ride without any pain. It will be a challenging mental game for Rossi because right now 2020 has slipped through his fingers and now it becomes a 2021 goal though leaving behind some key team personnel which will be a sad goodbye. We wish Rossi a speedy recovery. 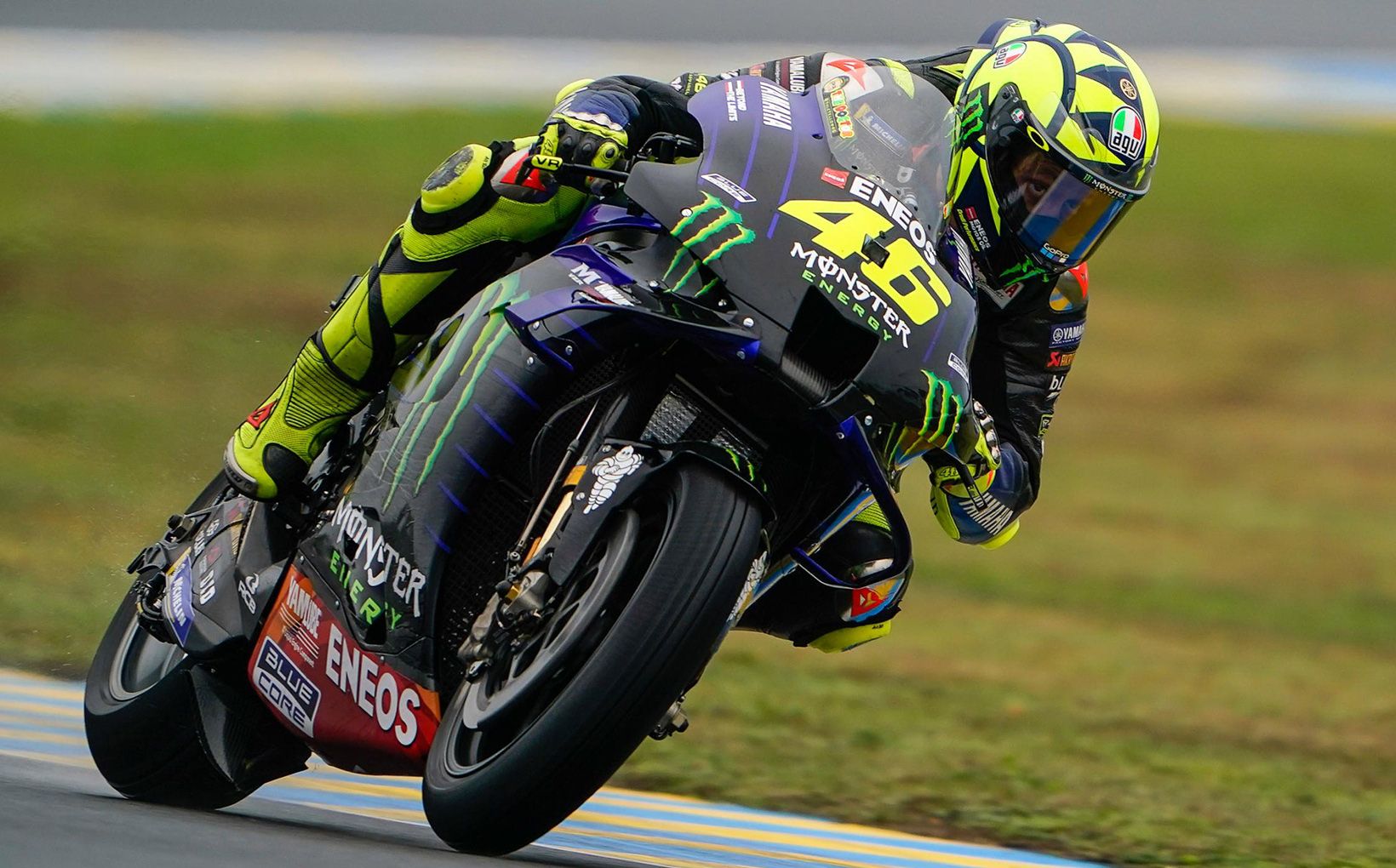 “Unfortunately, this morning I woke up and I was not feeling good. My bones were sore and I had a slight fever, so I immediately called the doctor who tested me twice. The ‘quick PCR test’ result was negative, just like the test I underwent on Tuesday. But the second one, of which the result was sent to me at 16:00 this afternoon, was unfortunately positive. I am so disappointed that I will have to miss the race at Aragon. I'd like to be optimistic and confident, but I expect the second round in Aragon to be a ‘no go’ for me as well... I am sad and angry because I did my best to respect the protocol and although the test I had on Tuesday was negative, I self-isolated since my arrival from Le Mans. Anyway, this is the way it is, and I can't do anything to change the situation. I will now follow the medical advice, and I just hope I will be feeling well soon.”

On the other side of the Yamaha garages, it will be a very important week for PETRONAS Yamaha SRT’s Fabio Quartararo and Franco Morbidelli as they try to carry momentum for the team and individual rider Championships. Right now it appears to be a battle between Quartararo, Joan Mir and Andrea Dovizioso. So does experience win or hunger to win at all costs with the younger mindset?

Regardless of what took place in Le Mans, it was a lesson learned for the French rider on how quickly things can change. Sunshine to rain drops. We will be watching closely this weekend to see what Quartararo’s approach is to a circuit that the Spanish riders usually dominate at and put on a great show for fans across the globe. 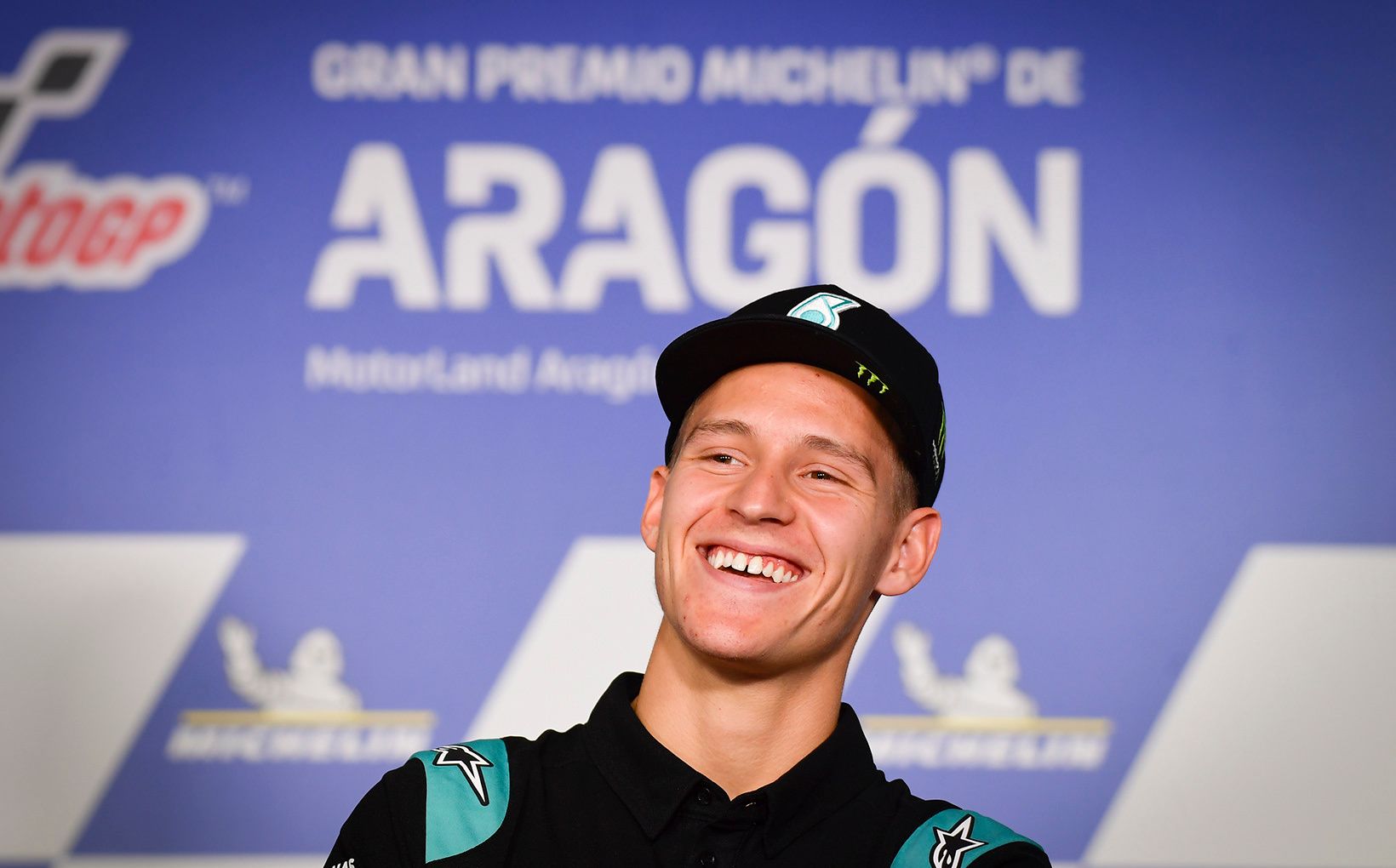 “We are in a good position going to Aragón, we don’t really need to change anything with the bike. It is a track that could be a little difficult for us, but we have the extra motivation that we are there to fight for a really good result. We are fighting for the championship, last weekend we managed to increase our lead in tricky conditions and so I think we can do really well again this weekend. First of all we will look to enjoy being back on the bike, then look at how we can make it a great GP for us and, of course, see what the conditions are like when we arrive.” 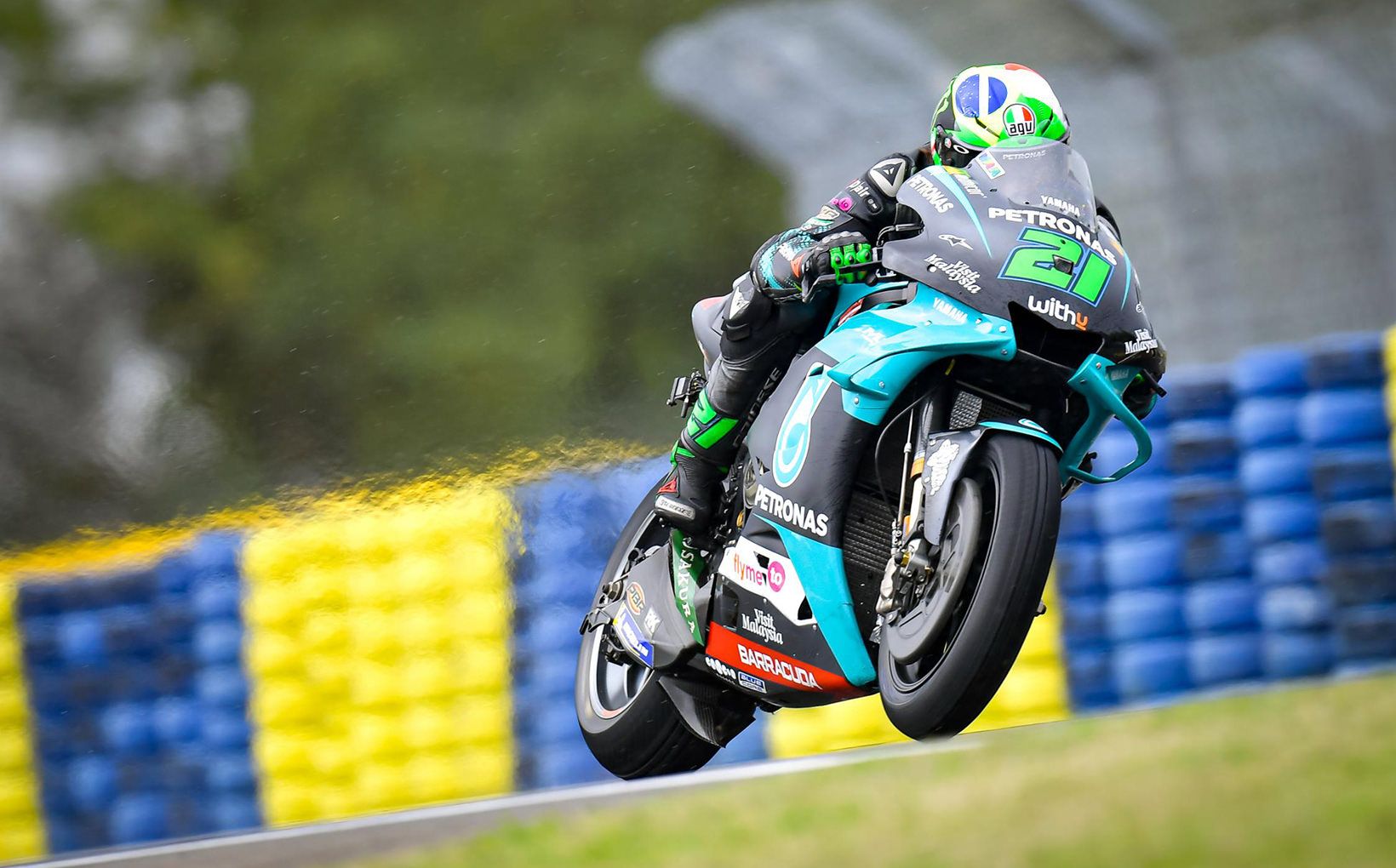 “Going to Spain this weekend, I expect that we will be fast! I love the MotorLand Aragón circuit. I won there in 2017 when I was in the Moto2 championship and I think that we can do a really good job there this year. It’s a shame we aren’t going there with better results from France, but we were super fast at Le Mans and we need to take this speed with us to Aragón this weekend. I don’t think that we will need to change a lot on the bike, of course we need to see what the conditions are like but I think it will be a good GP for us.”

Aragon is a circuit many of the riders enjoy and Mir is one of those riders who is excited after experiencing some cold tracks that certainly put pressure on his title chances. The Team Suzuki rider is ready for a change in scenery. The Spanish rider is impressive in his riding style, the control with the Suzuki machine and overall focus when it comes to pressure. Most expected his ride last week to end in disaster though when he needed to stay on board and achieve points, he certainly switched into a mindset that was Championship material. 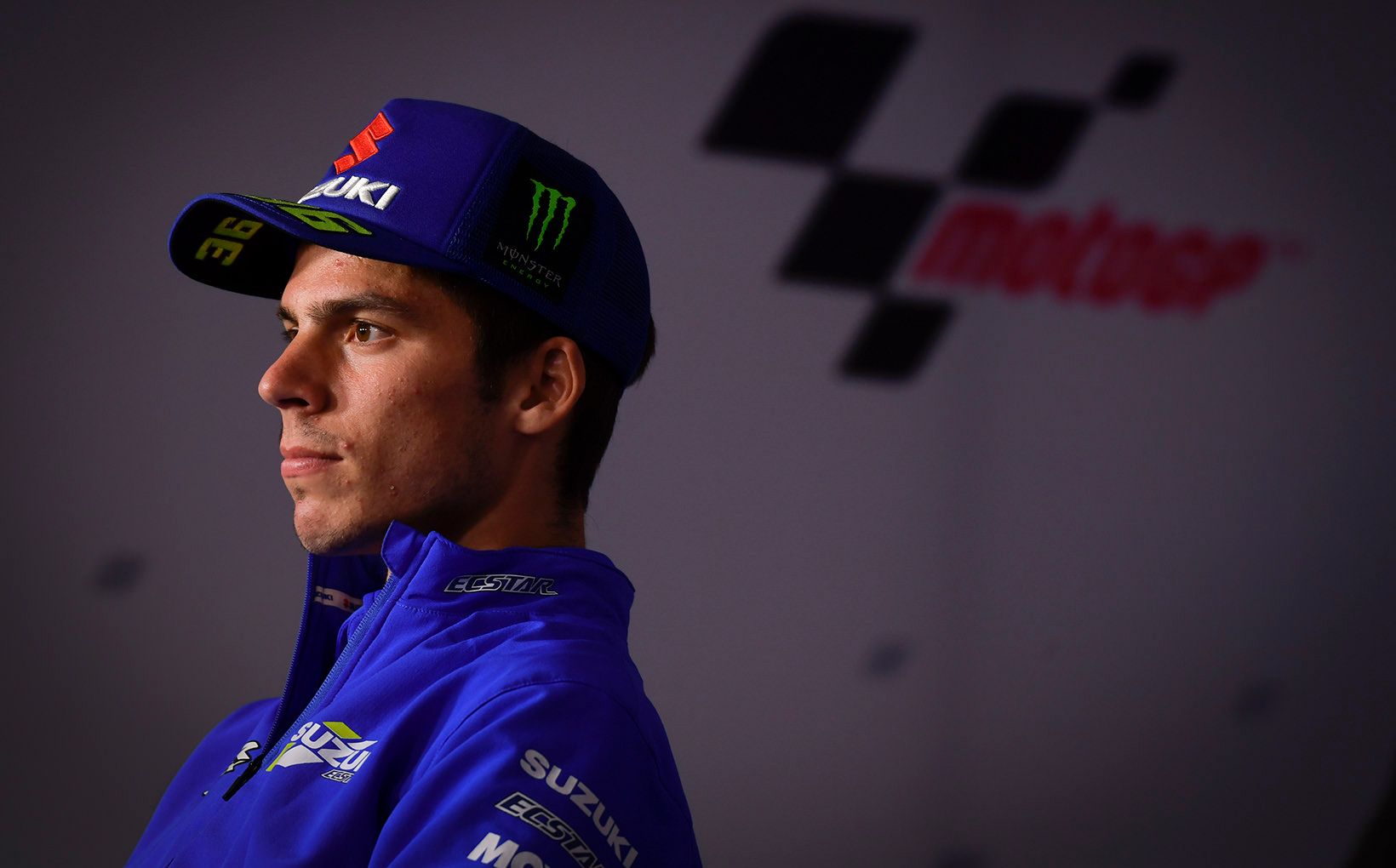 "It was not the best weekend that we could have hoped for but in the end, it wasn’t so bad. Honestly, during the weekend I never had a good feeling with the bike. I was never competitive enough. Then on Sunday the first laps I was not able to steer the bike, it was really difficult, but then I got a good pace and was able to catch many riders in front and it was the first lesson in wet conditions so I think we passed the test because of the pace, but the position was not the best one. It was funny to be fighting on the last laps with Fabio and Maverick, but you know, it was a GP we can forget. We passed Le Mans and now we start again. "I think that it can be a good weekend for us here. This track, I remember last year we were quite competitive during the weekend, we just missed the first laps of the race we had some problems, but I feel great and this could be a good track for us also, let’s see. This year you never know till the first day, but I feel it can be a great weekend."

In terms of the paddock, we are excited to see what Danilo Petrucci has up his sleeve this weekend after carrying the momentum from Le Mans to Aragon. As one of the nicest guys in the paddock, Petrucci cried when his mother was on FaceTime after his victory. You could see it meant a lot. In addition to this, Alex Marquez will be riding with confidence and plenty of courage as he grows into a MotoGP rider yet still in his rookie season. We will be curious to see how a different circuit will affect his riding and race pace considering the second place finish in Le Mans with tricky conditions. The feelings of success for these two after struggling for a period of time was a refreshing sight. 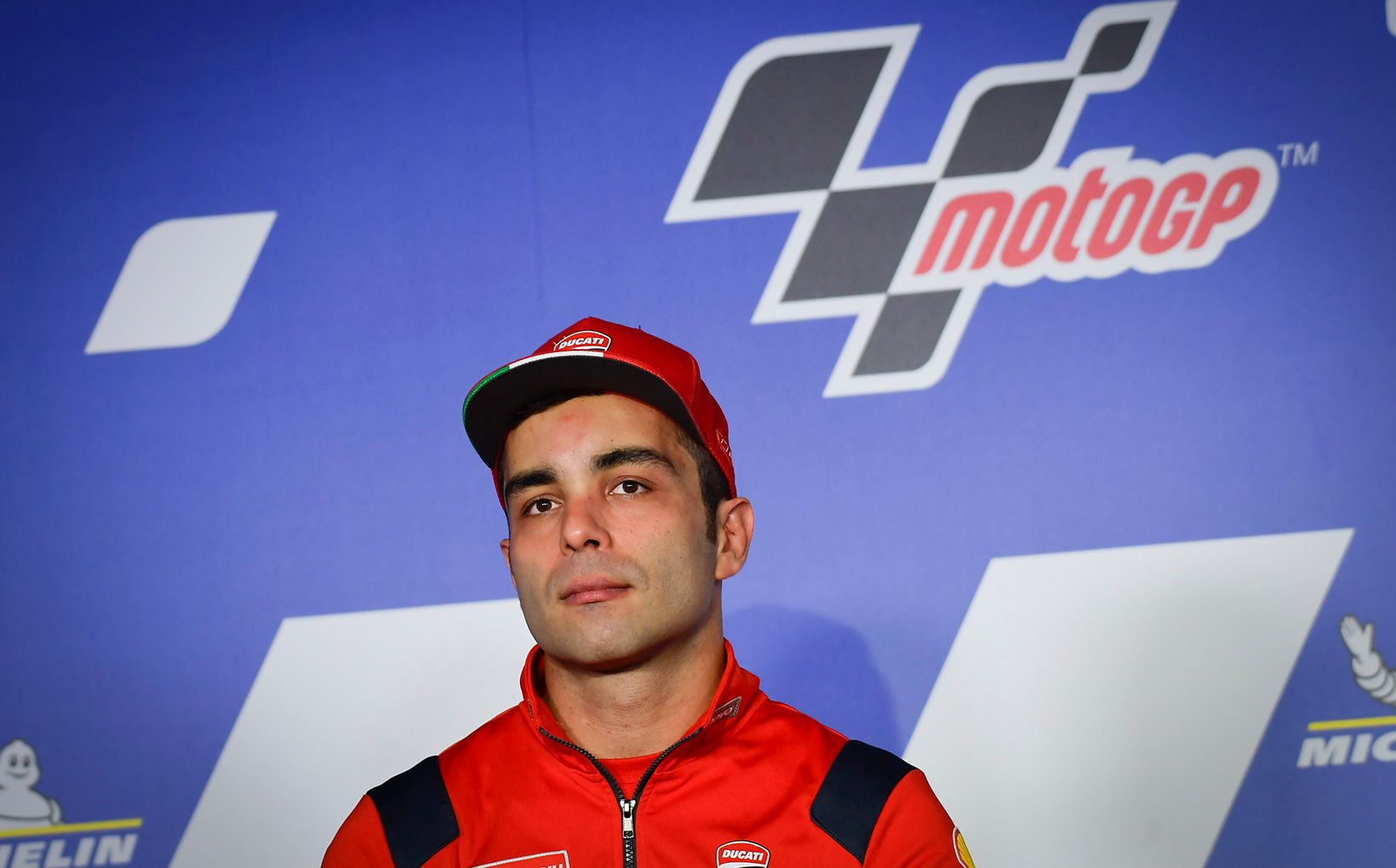 "The victory in Le Mans has certainly served to instill a lot of confidence, and I arrive at MotorLand with high morale. Every race is a world unto itself, but after overcoming such a difficult start to the season, now I want to keep improving. I hope to be able to continue with the same positive feelings we had in France, and I am confident that we can also have our say in the last five races that remain in the championship. Let's see what the conditions of the track at Aragón will look like when we arrive: we will have to be good at interpreting the behaviour of the Michelin tyres. It will be crucial to be able to start on the right foot from Friday's free practice." 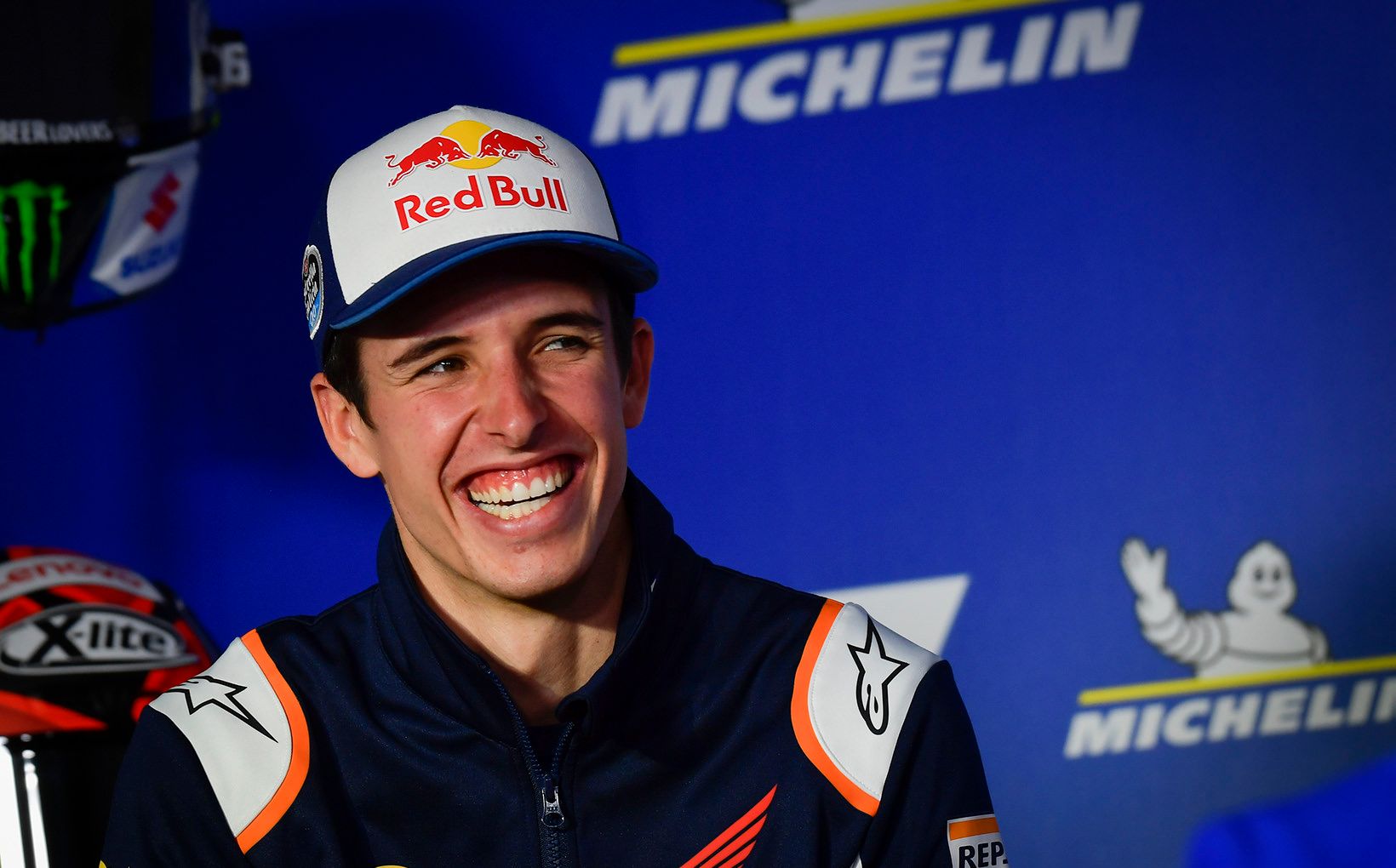 “It has been a nice few days enjoying the feeling after Le Mans, I want to say thank you again to everyone who has supported me or sent me a message after the race. But now it is time to reset a little bit and get back to work in Aragon. Qualifying is still the area we need to work on the most as we have shown that our race pace is usually not so bad and we’re able to fight more and more each race. Let’s see what the weather brings, Aragon in the morning can be very cold so we need to pay attention to this. Let’s have a good weekend.”

The challenges will still exist for Dovizioso and he is going to need to work through these in order to stay on top of the title race. The “old versus the young” with more battles to come as the season winds down. There are only so many opportunities left so everyone counts. 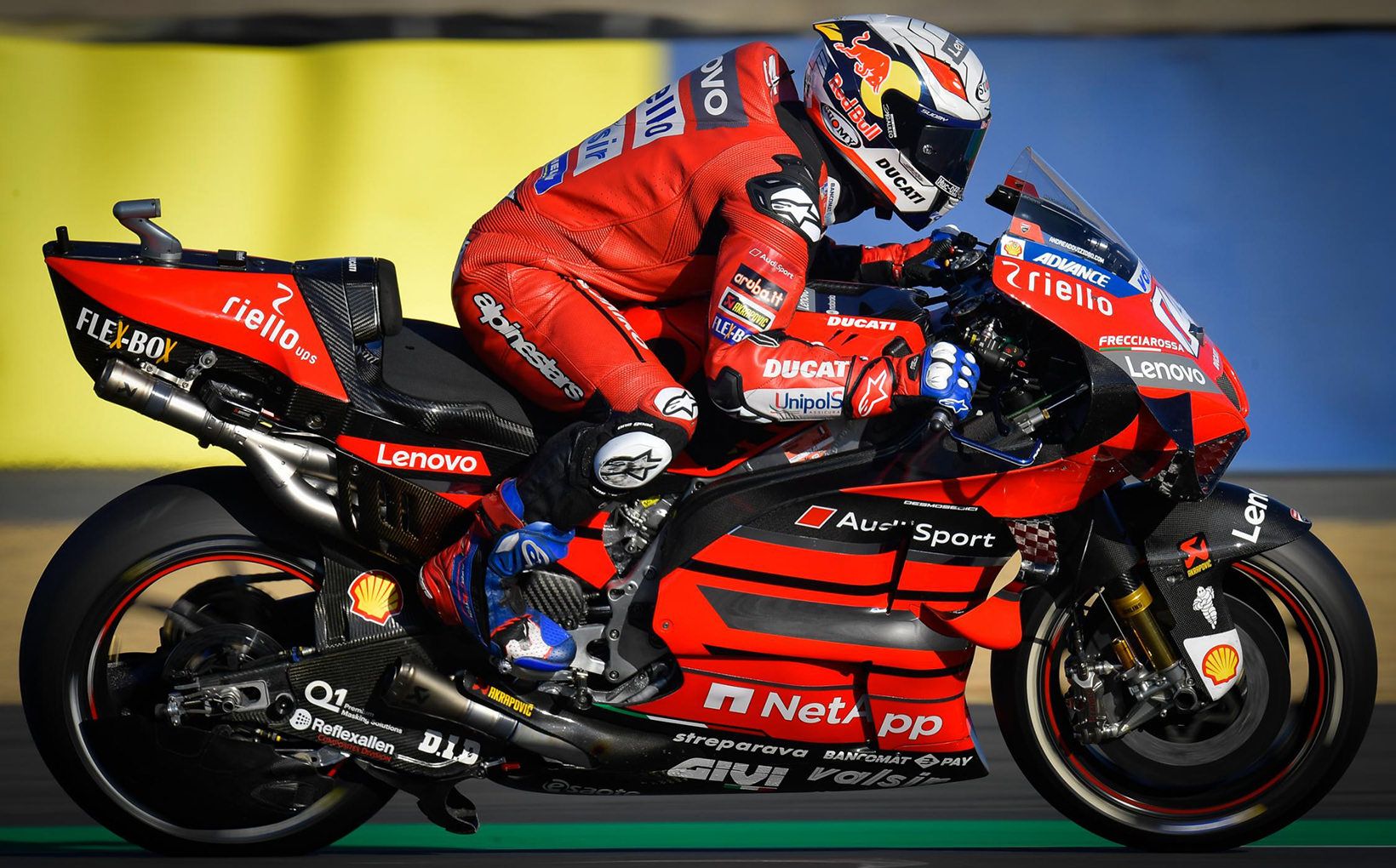 "We immediately moved forward after the race in Le Mans, and now we are already focused on the next two Grands Prix in Aragón, that will be crucial at this stage of the season. Last year I managed to get on the podium at MotorLand, and even if on paper we are not the favourites on this track, I am sure that we will also have some opportunities by using the strengths of our Desmosedici GP bike at its best. The championship is still open, and we have to keep working race after race to try to achieve our goal."

Who do you think will end up on the podium this weekend?

Could Jack Miller and Maverick Vinales recover and shake things up once again? 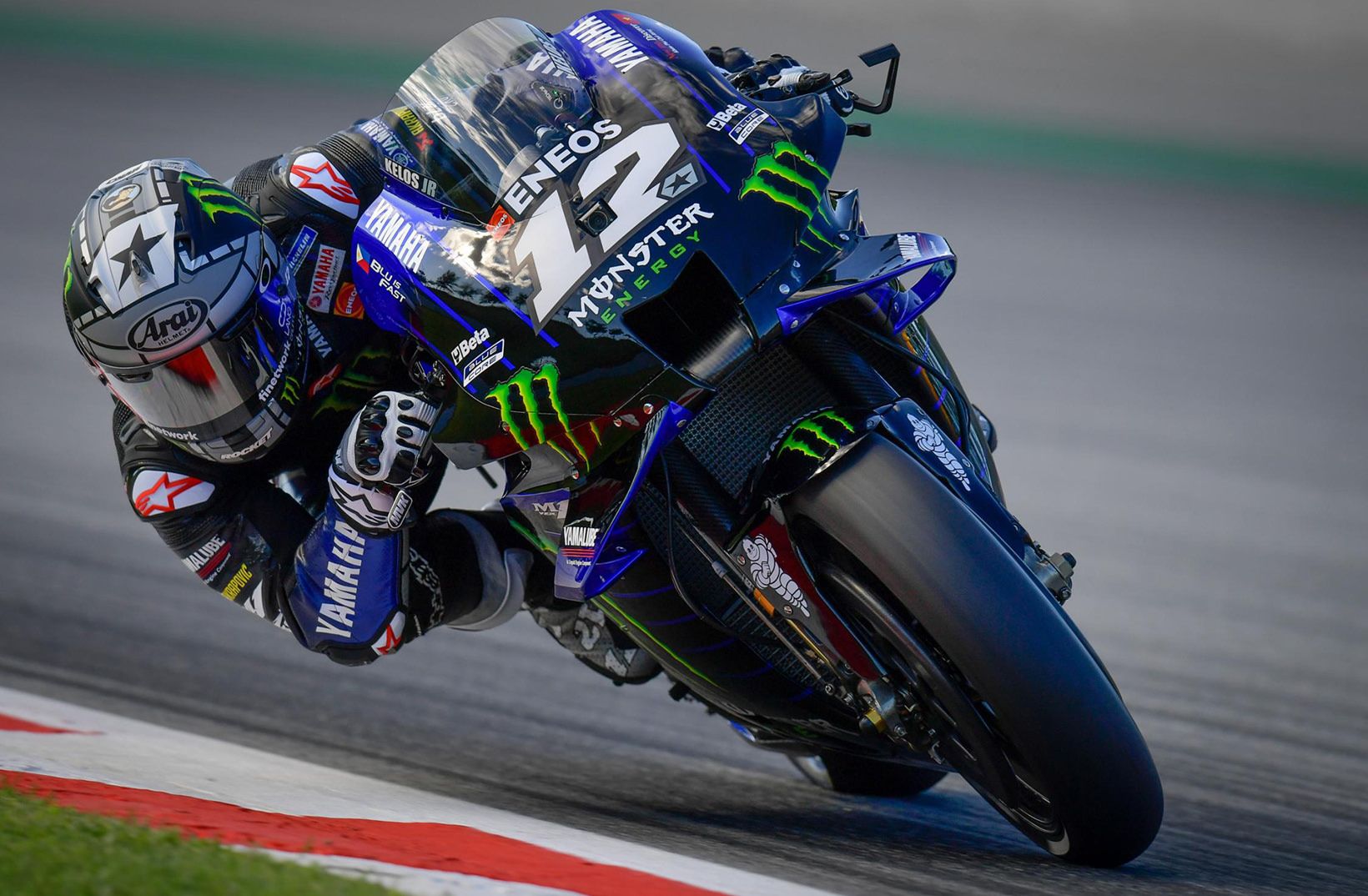 “I’m really happy that the next rounds are held in Aragon. It is a track that I love, one of my favourites. I usually ride really well there and, for sure, I will give it my all this weekend. It’s sort of my home GP, and it’s my goal to put in my best performance of the year so far. Last year we already came close to the podium, so I think that we can do a good job again this time round.”

Guess Who is Back in Town in Barcelona? Marc Marqu...